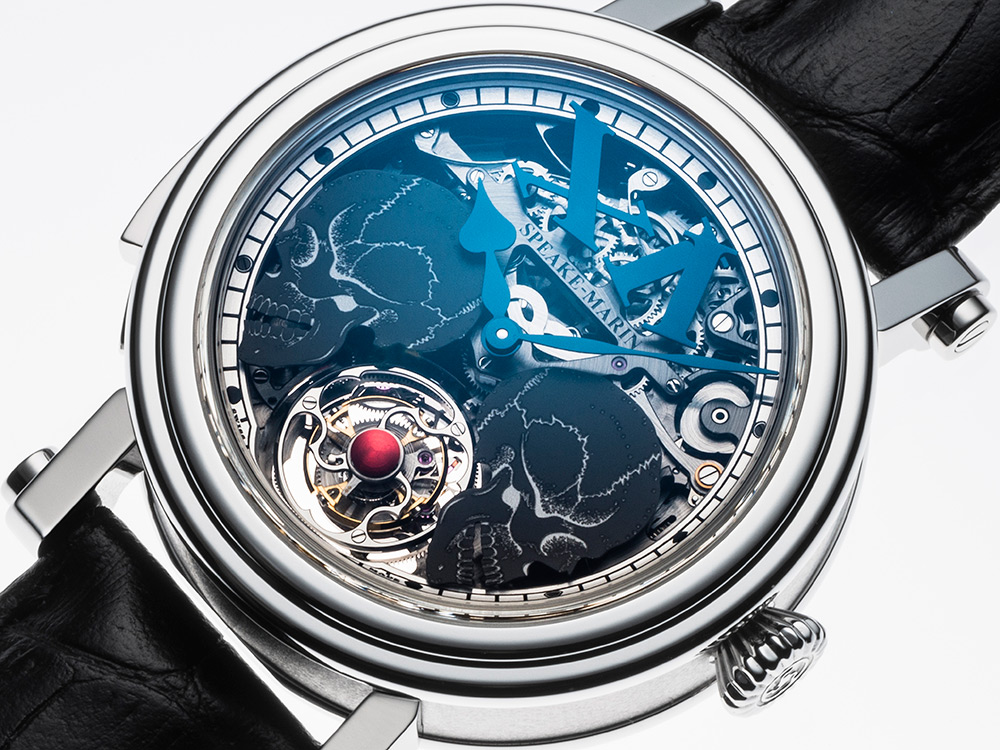 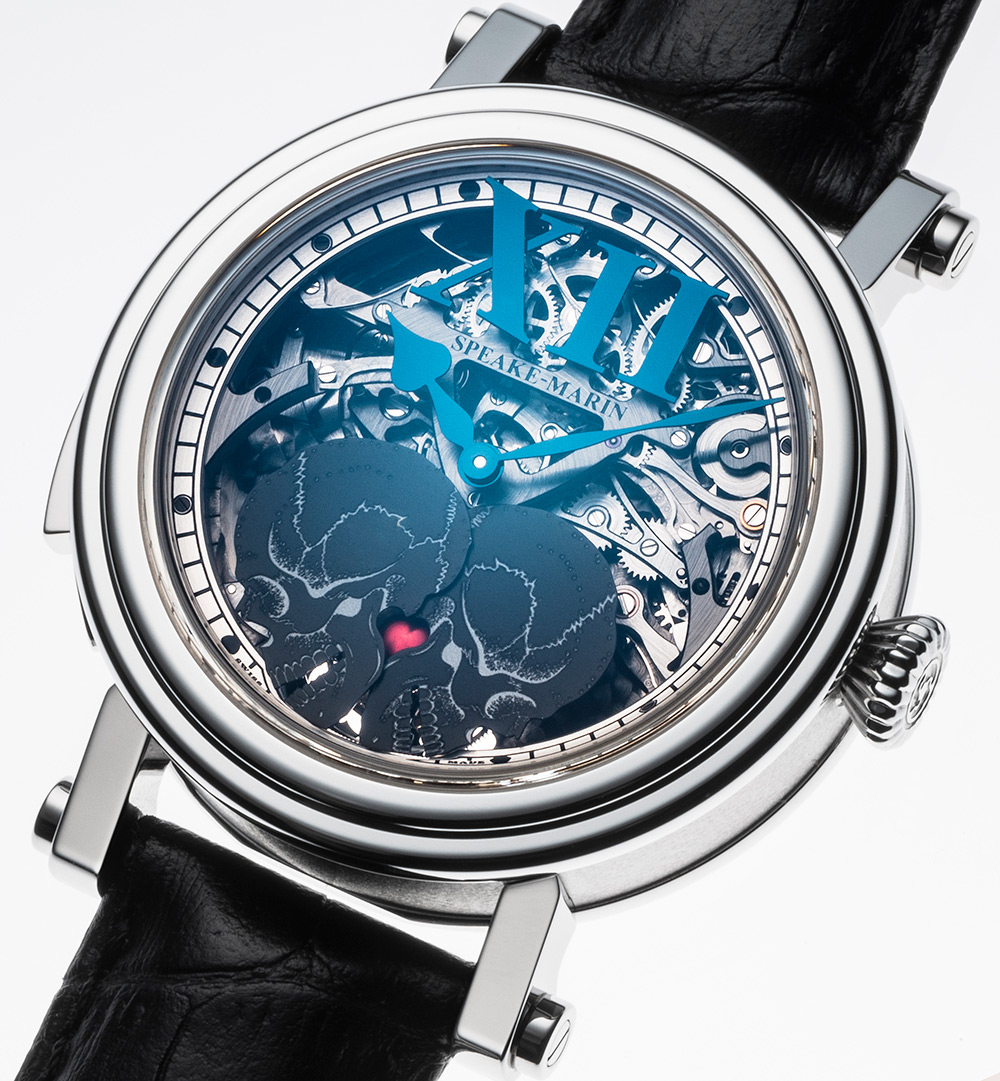 Peter Speake-Marin is a watchmaker worthy of admiration. Like most independent watchmakers, his eponymous brand is young. Founded in 2002, this means Speake-Marin, the brand, is just 15 years old. And yet, in the past decade and a half, the brand has successfully come up with an aesthetic that is undeniably theirs. The large, macho drilled lugs and that signature flamed-blue spade hour hand just scream Speake-Marin to those familiar with his work. The latest watch from Speake-Marin is called Crazy Skulls, and it lives up to the brand’s unmistakable reputation. 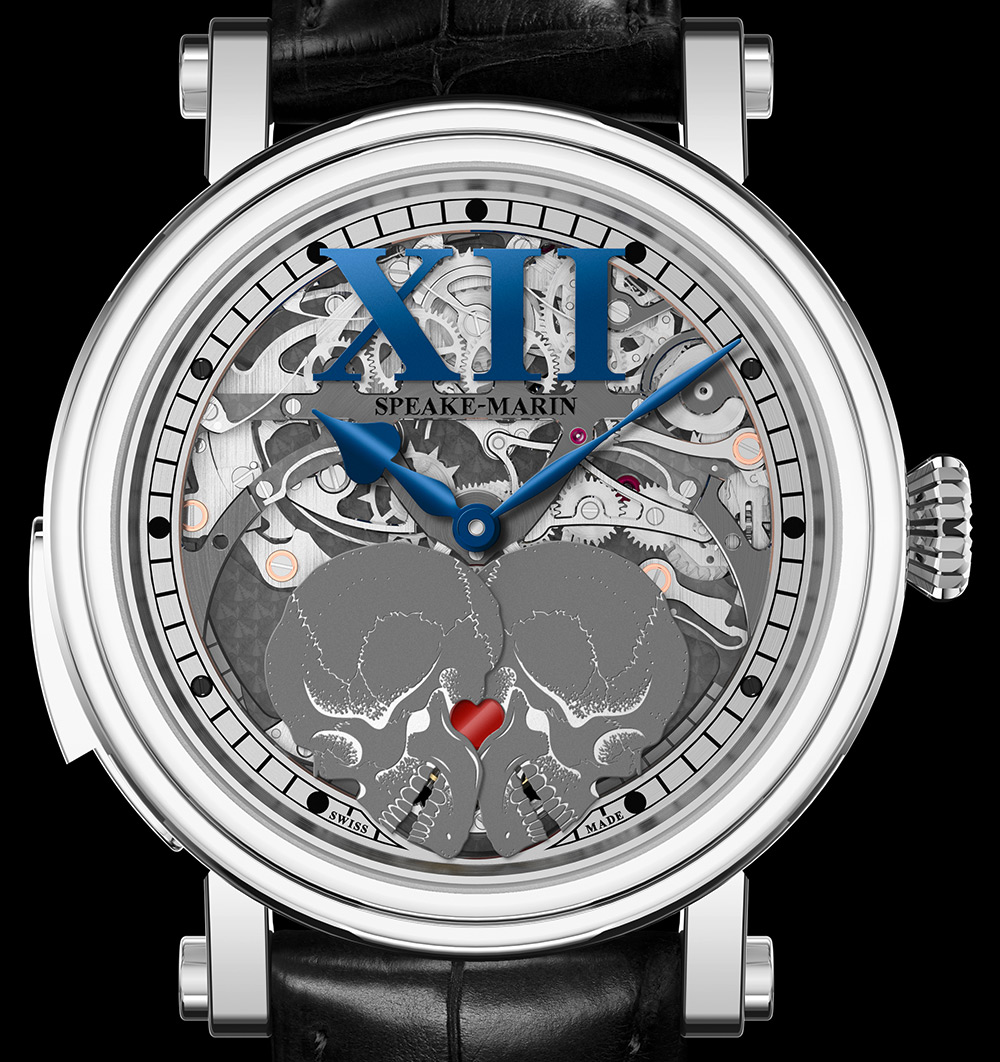 The Speake-Marin Crazy Skulls watch comes in a 42mm-wide Grade 5 titanium case, but with a platinum bezel and case back. Like all other Speake-Marin watches, the Crazy Skulls watch comes with the brand’s signature drilled lugs, which they call “Piccadilly Shoulders.” Apart from imparting a unique aesthetic to the watches, they also make strap changing easy. Water-resistance is only 30 meters, so stay clear of liquids. 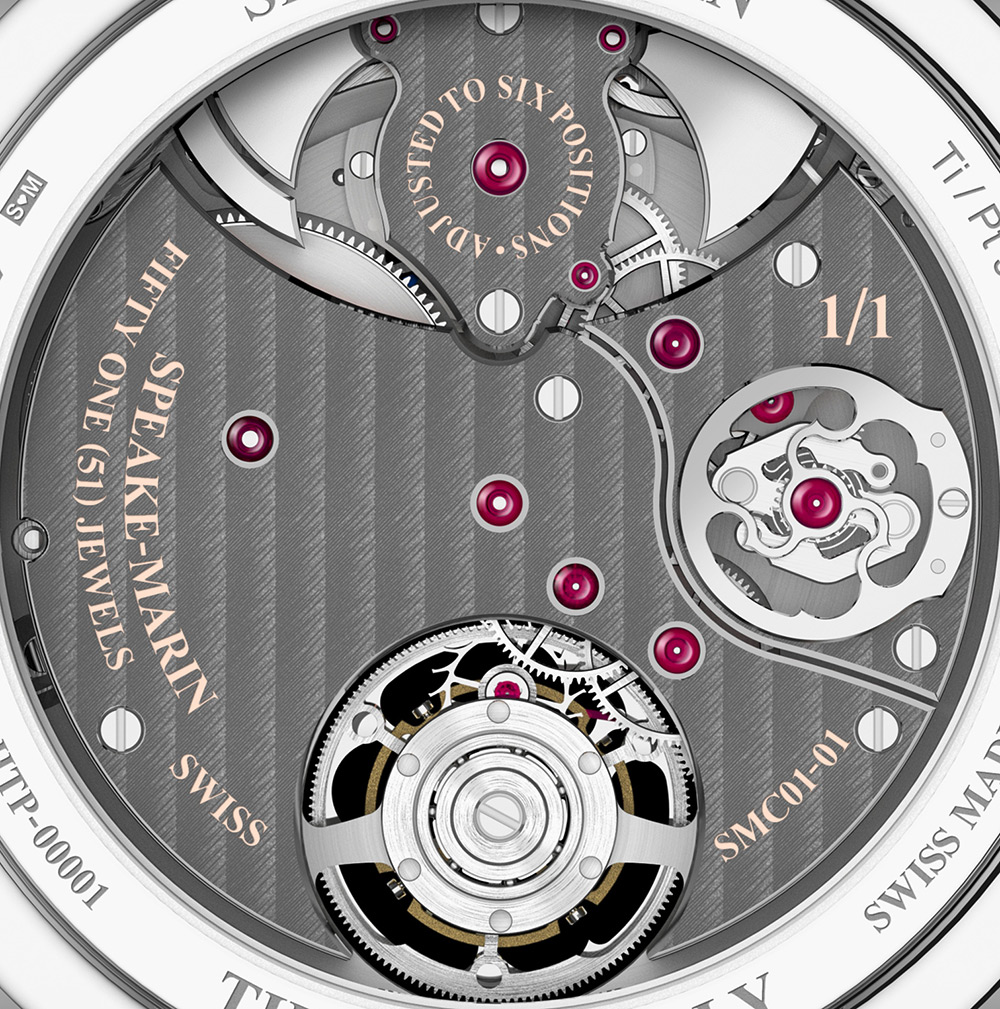 The Speake-Marin Crazy Skulls watch is part of Speake-Marin’s more complicated and artistic Cabinet des Mystères collection, and as such, it has a couple of tricks up its sleeve. If you look closely, you will see a slider at 8 o’clock. Yes, this watch is a minute repeater carillon. It has three hammers and three gongs and it is able to strike the time on demand. 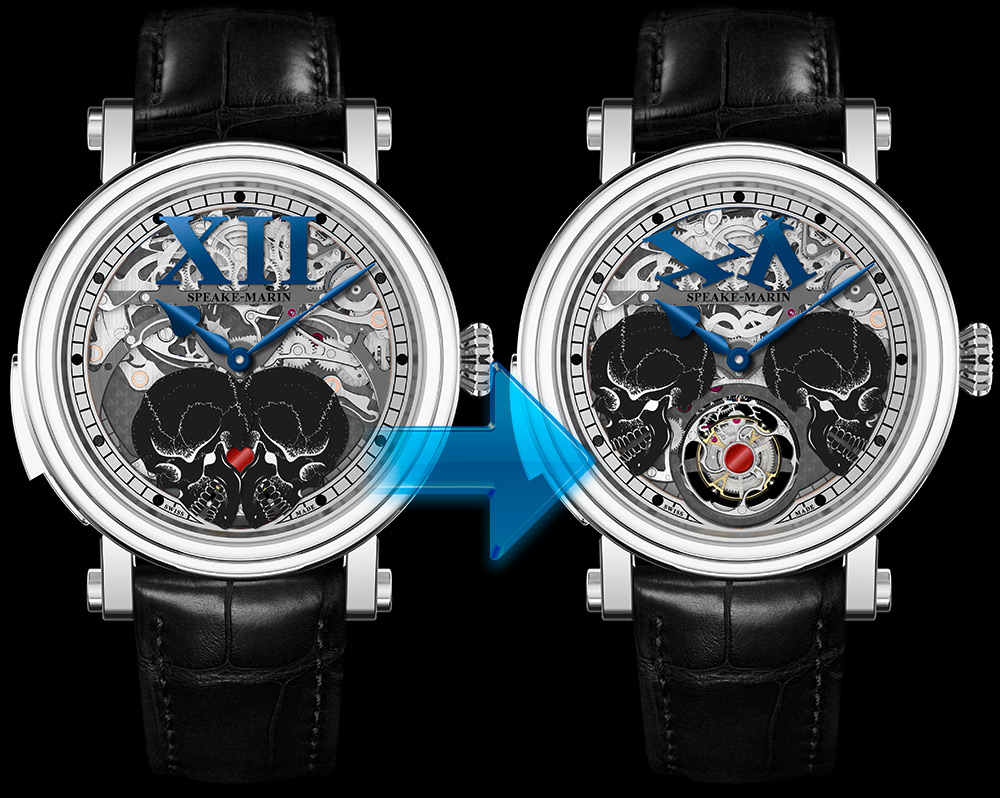 But more impressively, when the minute repeater carillon is activated, the two aluminum skulls on the skeletonized dial will separate to reveal the 60-second tourbillon underneath. The tourbillon, as you would expect, features an immaculately hand-finished tourbillon cage. But that’s not all – look up at 12 o’clock and you will also see the large flame-blued 12 o’clock Roman numeral markers kind of… falling apart. Interestingly, this is the first time Speake-Marin has created a watch with a tourbillon, minute repeater, and an animated dial. 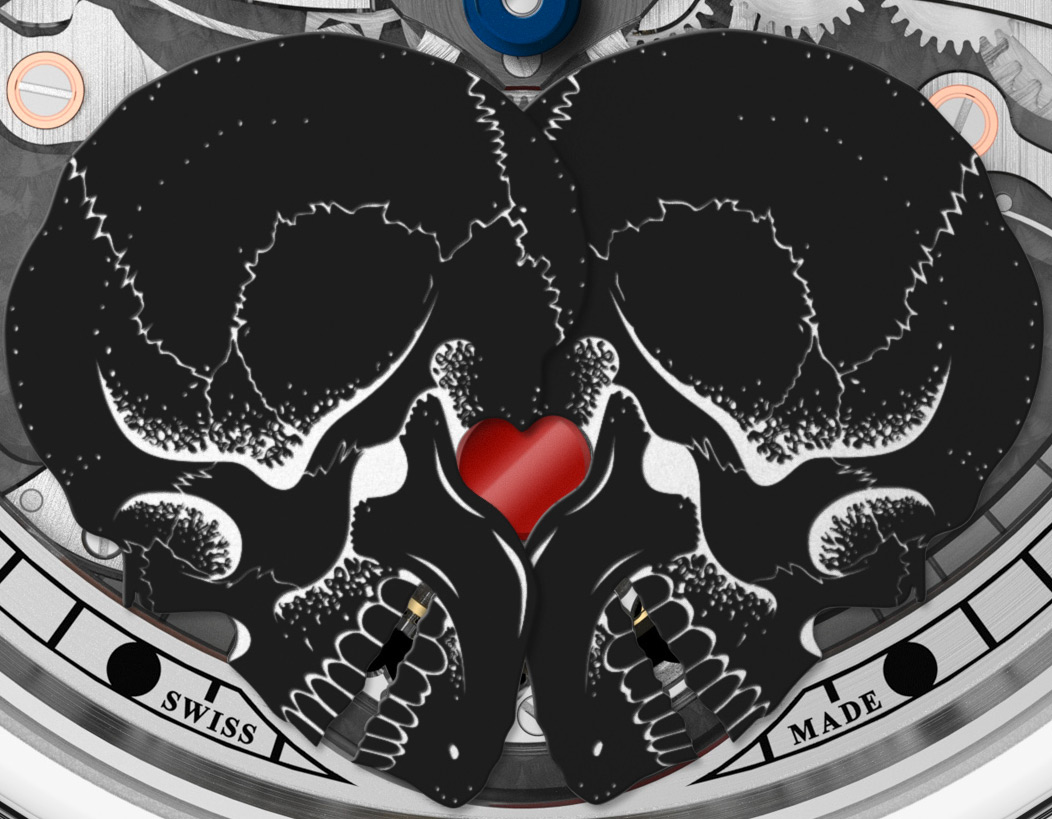 And once the chiming is complete, the two skulls will rejoin at 6 o’clock to conceal the tourbillon, and the 12 o’clock Roman numeral marker will reform itself. This isn’t just an exercise in frivolity. Look closely and you will see that the two skulls actually form a little heart in the middle. The activation of the minute repeater, therefore, signifies the separation of two lovers and the ending of the chime marks their reunion. All in all, the Speake-Marin Crazy Skulls watch is a quite a sight to behold and certainly makes the minute repeater complication, which is already a feat in and of itself, even more interesting and visually exciting to watch. 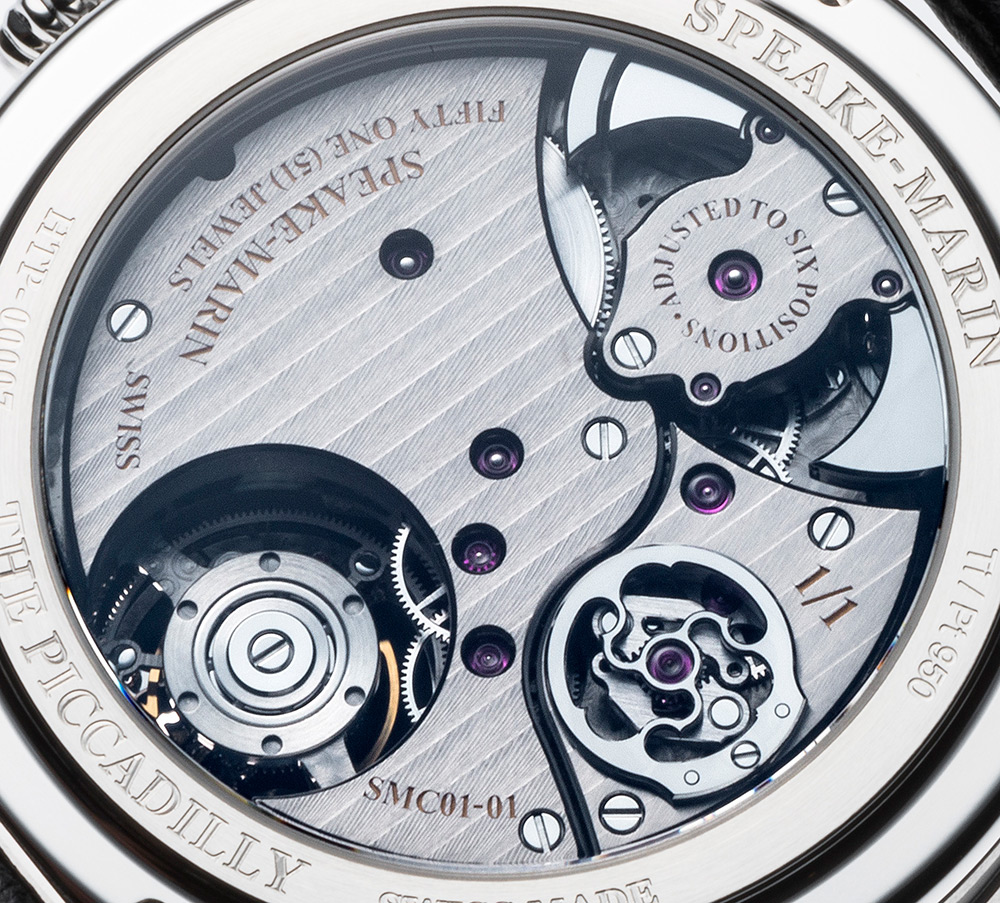 The movement within is the caliber SMC01, which can be viewed from the sapphire display case back. It is a hand-wound movement, and it offers 72 hours of power reserve. From behind, one can easily see the three hammers and gongs and also the centrifugal governor of the minute repeater, which spins when the minute repeater is activated. The large bridges and main plate feature circular graining and are beveled. The screws’ heads and countersinks for the jewels are also polished.