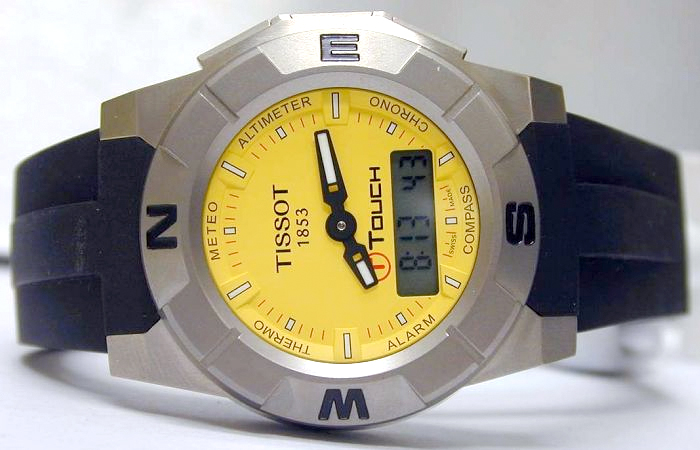 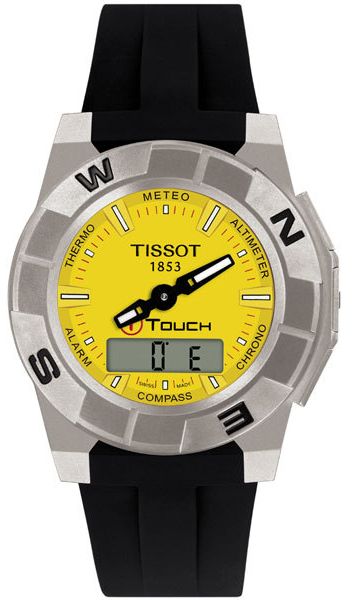 While I am not a lover of reality shows because most of them are not “real,” an exception is Survivor Man on The Discovery Chanel. The idea of the show is simple. Les Stroud, a guy who has been doing nature survival shows for a long time throws himself into the wilderness for a week, and tapes it himself. No TV crews, not too much lame drama. Just a guy eating whatever he finds and looked ragged each morning. And that is what I like about it. The guy is a total man’s man, without being a douche about it, and is never all high and mighty about himself. The competitor show Man vs. Wild (also on The Discovery Channel), is the opposite of this. Some ex British Special Forces guy named “Bear” who is followed around by a camera crew (that “will not feed him”). That is not a reality show, that is a farce. Coincidentally, I am pretty sure that Bear Grylls in Man v. Wild wears a yellow-faced Breitling Emergency.

So for the third season of Survivor Man, Les Stroud is wearing a new watch. This time it is a Tissot T-Touch Trekking. with the yellow face. While the watch comes in other colors, the yellow is meant to assist with viewing it in low light conditions (not to be stealthy). I’d opt for the darker toned faces (like the PVD all black version). You are probably familiar with the Tissot T-Touch line of watches. They are really something cool. The functions aren’t anything completely unique as watch makers Suunto and Casio have been doing them for years, but Tissot is able to integrate them in a slicker manner. What makes the Tissot T-Touch watches different are the touch faces (you literally touch the section of the watch you want to activate – see the names of the functions around the face?), and the analog-digital hybridization. So you don’t get more functionality out of the Tissot T-Touch watches, you just get it in a cooler  (and arguably more sayisfying) way. It should be obvious that these are quartz/computer watches, versus mechanical ones. Battery life is about 1-3 years.

The functions are pretty useful, especially for someone in the wild. A sensor inside the watch measures barometric pressure and temperature. These are used for (of course) temperature readings, altitude, and weather predication (Meteo on the watch). As for the temperature function (Thermo), it is best to take the watch off for a minute for the best reading as it will be influenced by the heat of your wrist. There is also an electronic compass inside, which is one of the most useful features. There are also a few other functions that are important but less exciting; date, alarm, stopwatch (Chrono), and light (important, even though the hands are lume covered, but that won’t help you in the dead of night). When the watch is in time mode, the time is displayed on the hands and in the LCD screen (that shows the seconds as well). I recall the first such watches that were analog-ditigal combos back in the 1980s that came from Casio.

One thing that isn’t obvious if you’ve never played with this watch is how the functions “come to life.” Press your finger on the compass portion of the face, and the hands reorient themselves to form a pointer, with the longer end (minute hand) pointing north. The LCD panel then displays the degrees (0-360). You don’t get to see the time while in this mode, but you get a fully functional electronic compass on your wrist. I imagine that Les Stroud uses this a lot, though he is less inclined to admit it. I know I would use it instead of relying on the sun for direction. To place the watch back in the default time telling mode, you just put your finger on the function again to return to the standard watch mode.

The first in this line of watches was the basic Tissot T-Touch, which came in various flavors (colors, straps, dials). They even had a white mother of pearl version for the ladies (yea, it was cool). Then Tissot released this version of the T-Touch which is the Trekking model. The size and look of the watch was dramatically altered to have a very modern, thinner, and more technical (as opposed to strong look). Thus you can see the smooth angular lines on the (rotating) bezel. The Trekking line comes on a rubber or nice looking metal bracelet. Further, the metal used is titanium, so they are really light. In the entire T-Touch line, steel or titanium options exist. The newest T-Touch watch to be released by Tissot is the T-Touch Expert. This is more similar in design to the original T-Touch, but has a larger case overall, a larger LCD panel, and some upgraded looks and dial graphics.

I would venture to say that the T-Touch line has been one of the most successful watch lines for Tissot. I have seen these watches everywhere, on many different kinds of people. The coolness factor of the watch functionality is universal, and they have a look that really works well in different markets. Pricing is aggressive given what you get in these watch, and I would venture to say that this is really a gateway ‘nice’ watch for many people. Meaning they go from a $100 watch to a Tissot T-Touch, and then might begin to appreciate watches in the $1000 plus region. The T-Touch original, Trekking, and T-Touch Expert range from about $400 – $1000. Certainly not couch change, especially for non-watch enthusiasts used to higher prices, but a very reasonable price given the fact that it is a Swiss watch, from an established company, and all the functionality you get.

Survivor Man Les Stroud was wise to choose this watch for its durability and usefulness. Exactly the type of watch I would predict the guy would opt for. It looks big and chunky on his wrist, but really isn’t that big in comparison to the T-Touch Expert. The Trekking line is of the harder T-Touch watches to find, but certainly of the nicest. Oh, and look for the rare version with flame graphics on the face.

*UPDATE* Due to the popularity of this article, I thought it a good idea to link to an article of mine on choosing a wrist watch for hardcore survival scenarios. The Tissot T-Touch doesn’t make it on this list, but for a very specific reason that you’ll learn when you check out the criteria.