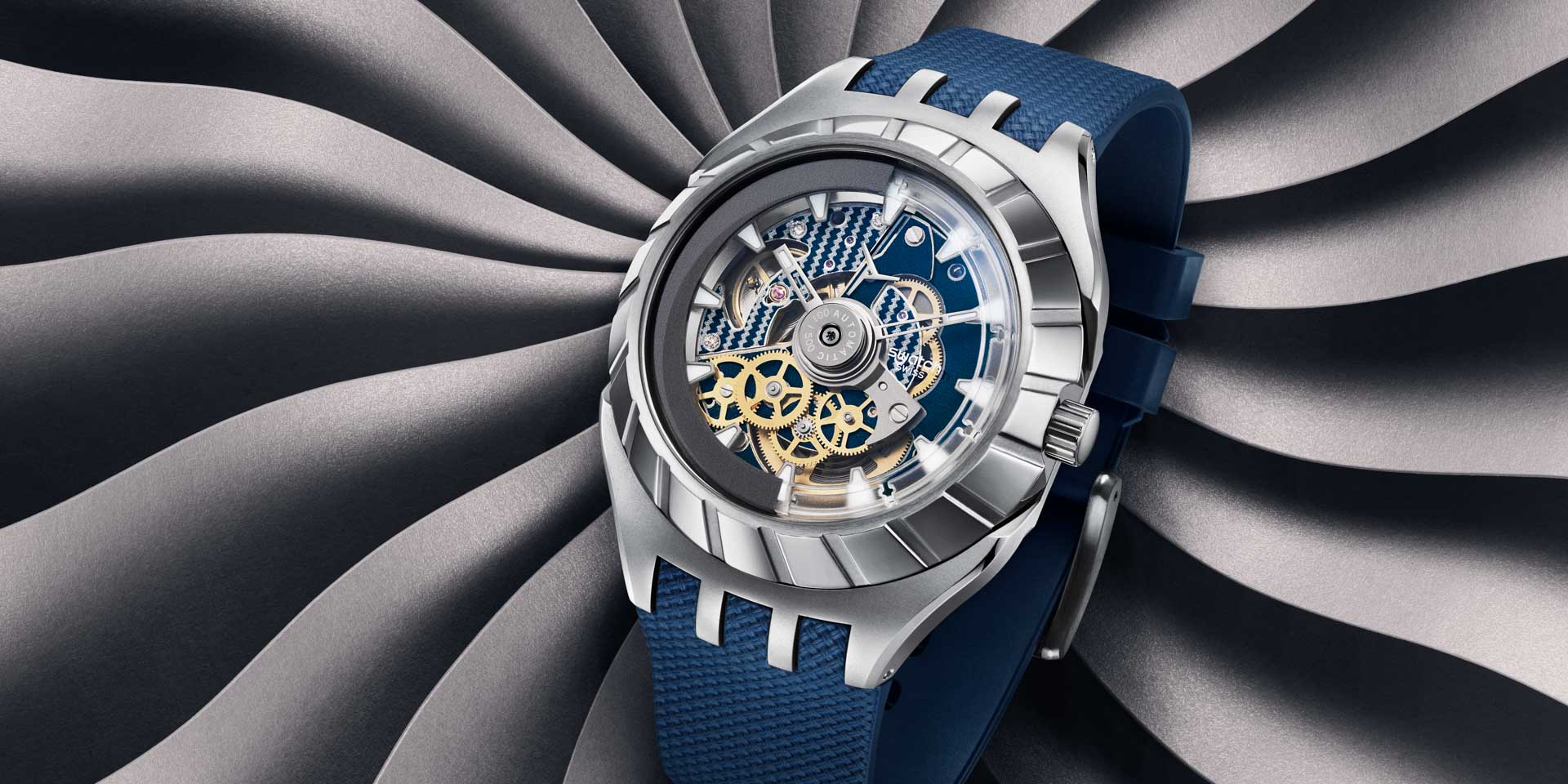 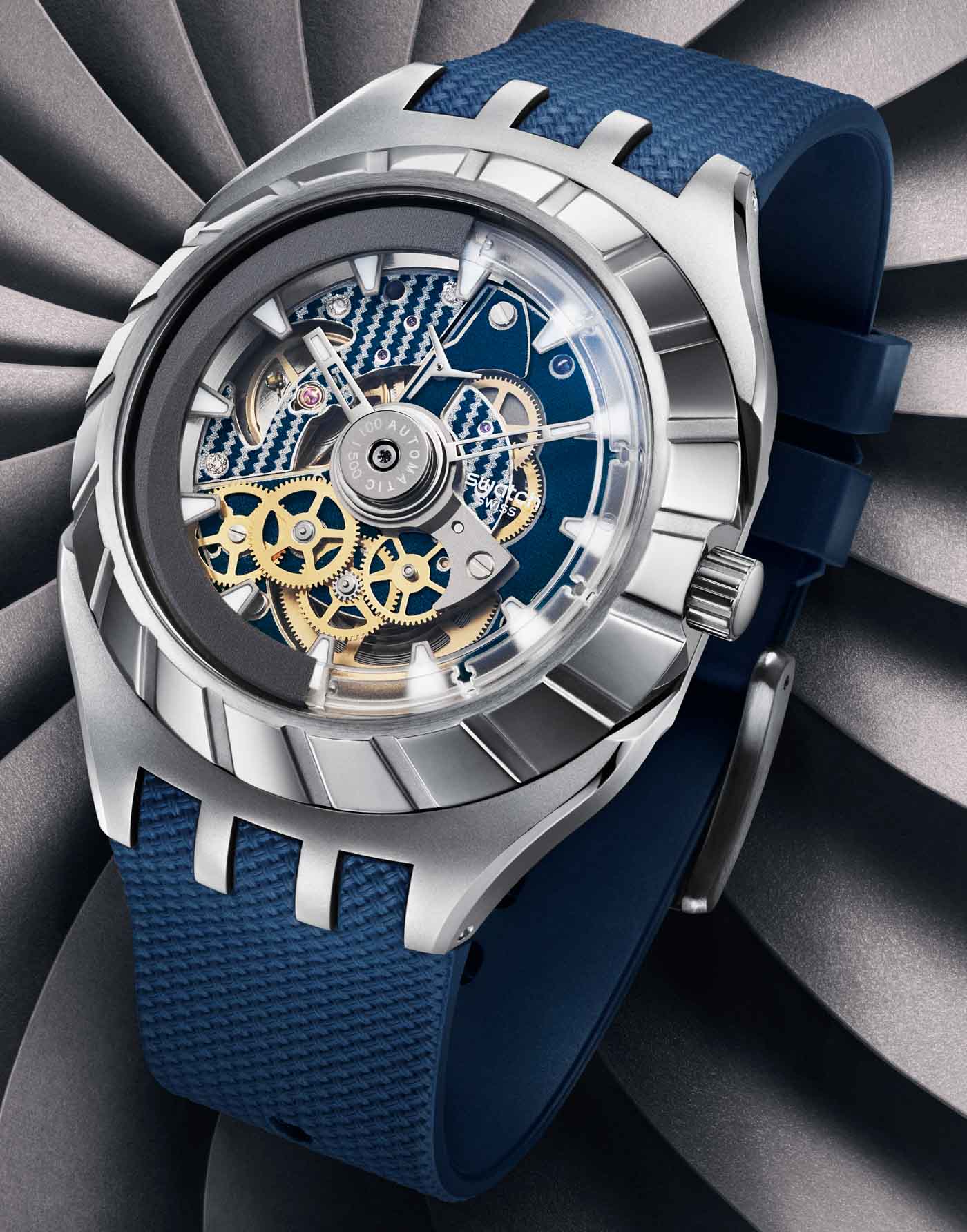 Today sees the launch of the most unusual Swatch collection in a long, long time with the new-for-2019 Swatch Flymagic, an arguably cool-looking, albeit genuinely expensive collection of three steel-cased watches, featuring a reversed and revised Sistem51 automatic, fully mechanical caliber and a new magnetism-resistant — but contrary to common belief, not paramagnetic — Nivachron hairspring. 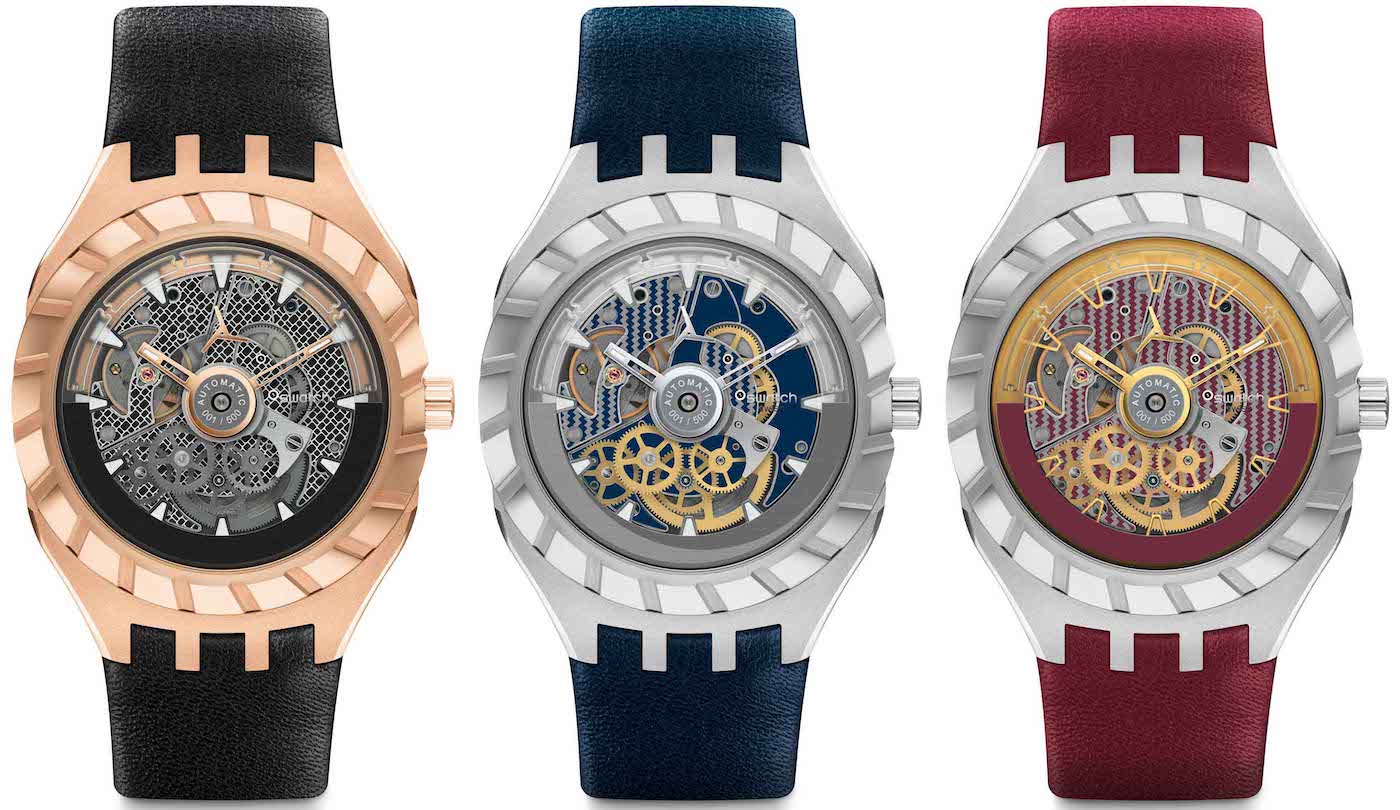 While the Nivachron hairspring is interesting, even more compelling is the styling and pricing of the Swatch Flymagic — so that’s where we begin. At 45mm-wide and 14.8 mm-thick, the Flymagic is a beastly watch that pairs un-Swatch-like proportions with a measly 30 meters of water resistance. And you’ll probably need more than that for it to stand the test of your waterfall of tears, given the $1,500 price tag. Wow. 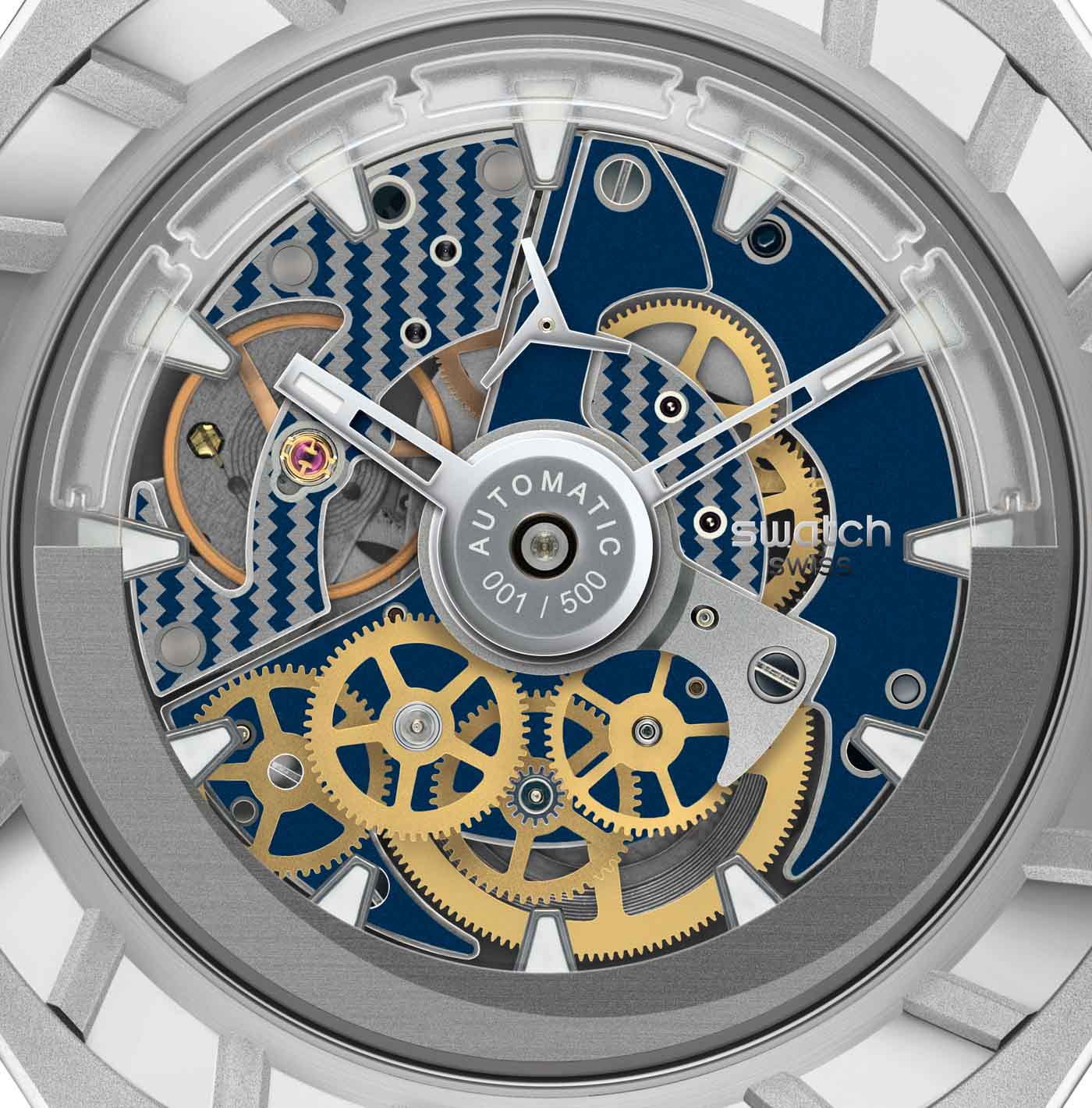 The Flymagic movement is, essentially, a reversed Sistem51 caliber. Launched almost six years ago, the Sistem51 was revolutionary in that it powered a $150 watch with a mechanical heart. Running at 3 Hertz and providing 90 hours of power reserve, the entire automatic Sistem51 movement was — and still is — assembled entirely by robots, including the traditionally tedious and difficult rate adjustment of the balance wheel, a task that is performed by lasers. A pinnacle in 21st-century watchmaking, the Sistem51 stood out for its bold styling and affordable pricing. 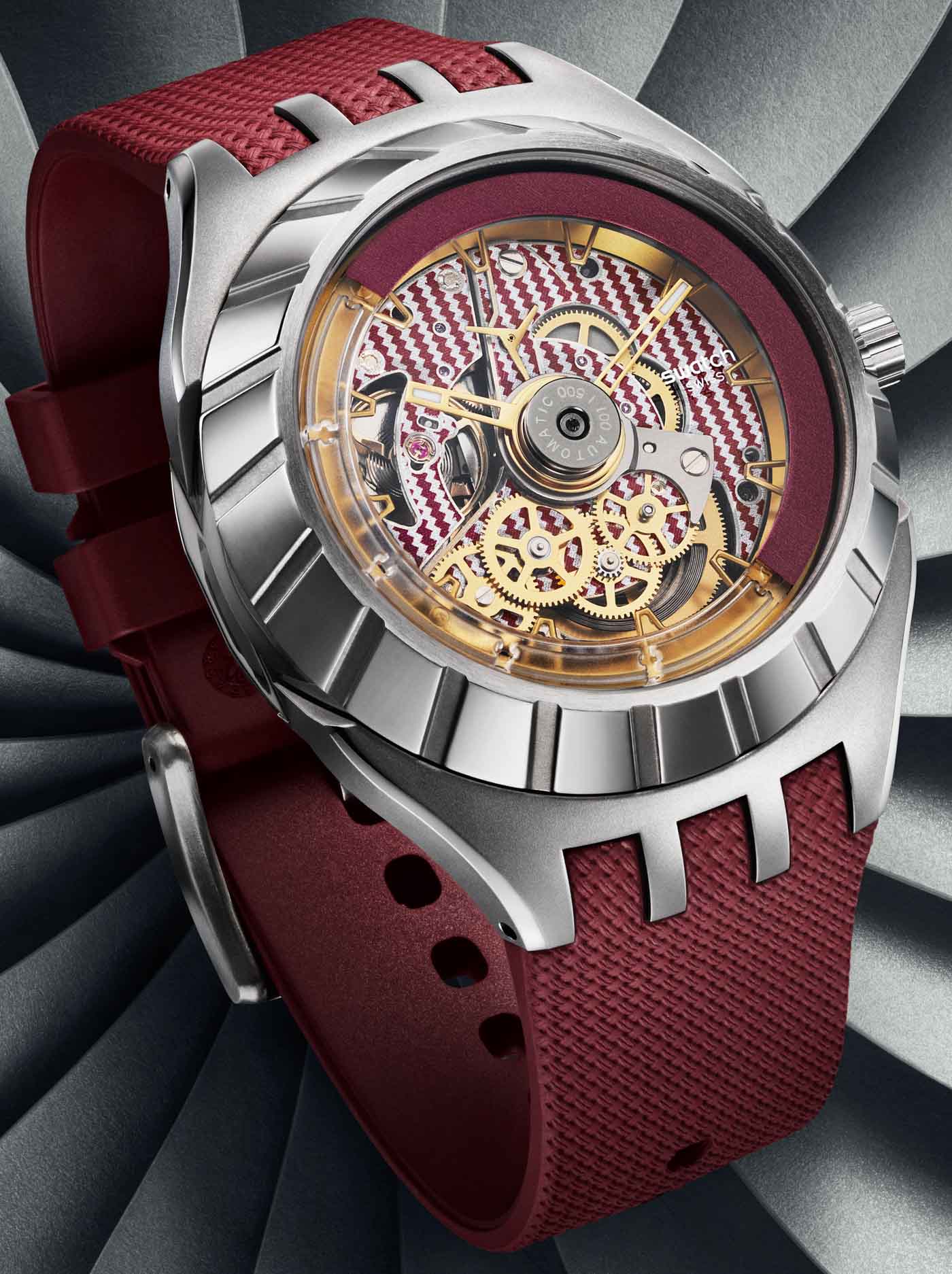 The Swatch Flymagic takes this movement and installs it reversed in this case. For all that to work, the movement features an additional fifteen parts (making it the Sistem66, I guess), just so that the time display functions properly… kinda. The centrall— located running seconds of old is now a sub-seconds at the 12 o’clock position on the dial, running backward – because that’s how all seconds work if you look at them from behind. That said, I don’t think anyone would find humoring such a quirky detail on a Swatch any hardship at all. 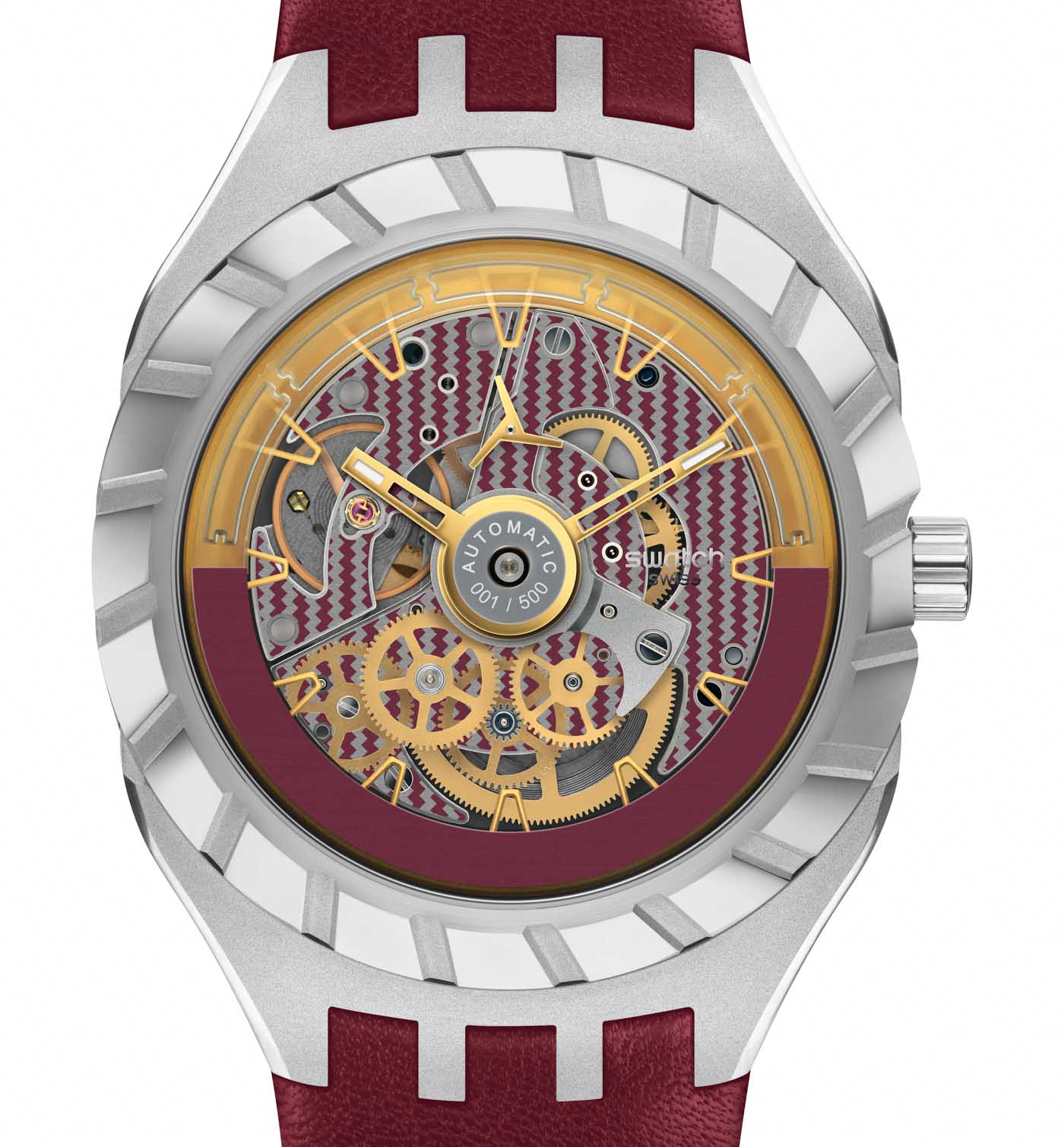 What will likely be much more difficult to justify for many is the $1,500 price tag. Although the new hairspring is novel in some ways (more on that just below), I struggle to see enough to justify a times-ten price hike, given the massive steel cases, Sistem51-equivalent dials, and the $150 movement. To be fair, that price is matched with three straps (one rubber and two calf straps in the box), as well as exclusivity: The three steel versions, two bare steel and one red-gold PVD-plated, come as an individually numbered limited edition of 500 pieces each. Whether or not the gold PVD will entail a further price increase is yet to be confirmed.

The hairspring I fear many will misrepresent as “paramagnetic” is called Nivachron. Developed by Swatch Group’s movement, hairspring, and assorted component manufacturers, ETA and Nivarox, it is a titanium-based alloy “with exceptional paramagnetic characteristics.” We encounter weaker and stronger magnetic fields in our everyday lives and, although our bodies are normally left unaffected by them, mechanical watch movements can build up magnetism over time, eventually reaching a point that the timekeeping accuracy guaranteed by tiny little metallic parts is affected. 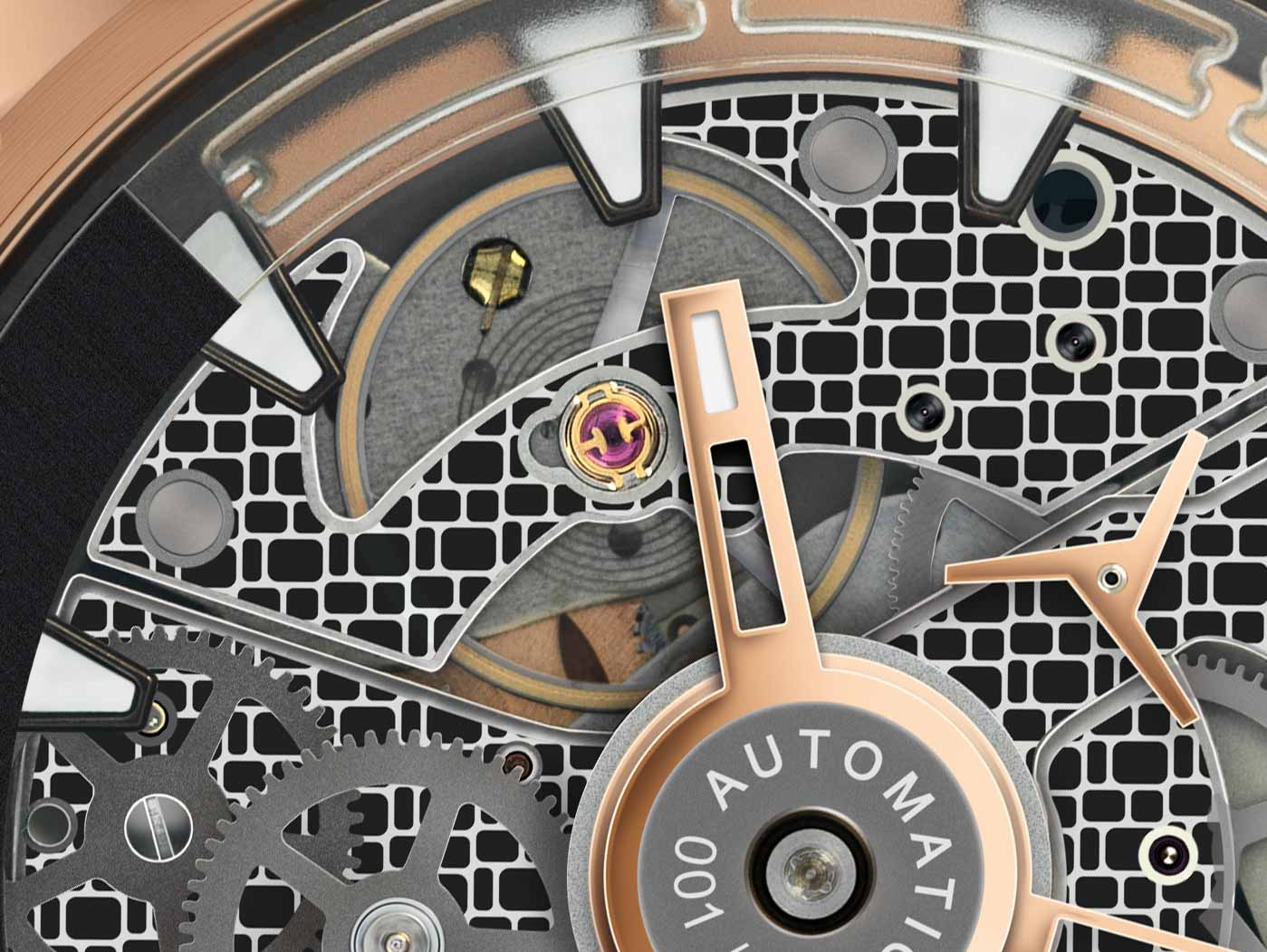 The Nivachron balance spring, Swatch says, “reduces the detrimental influence of a magnetic field by a factor over ten, depending on the type of movement” (though elsewhere they say a factor of twenty). Anyhow, Nivachron is considerably more resistant to magnetic fields than are traditional hairsprings — but not as resistant as entirely paramagnetic materials such as silicon (used by Omega for its hairsprings), for example. A cool aspect of the Swatch Flymagic and its reversed movement is how the semi-transparent automatic winding rotor of the Sistem51 is now on the dial side.

Swatch also says that this new component boasts effective resistance to shocks, as well as changes in temperature, hence further improving chronometric performance. In the future, all Sistem51 models will feature the Nivachron™ hairspring, though when that will happen is yet to be specified. This small, 1,500 total run of watches is telling me that won’t be happening anytime soon — but the Group might just flex its muscles and bring these to market sooner rather than later. Only time will tell. 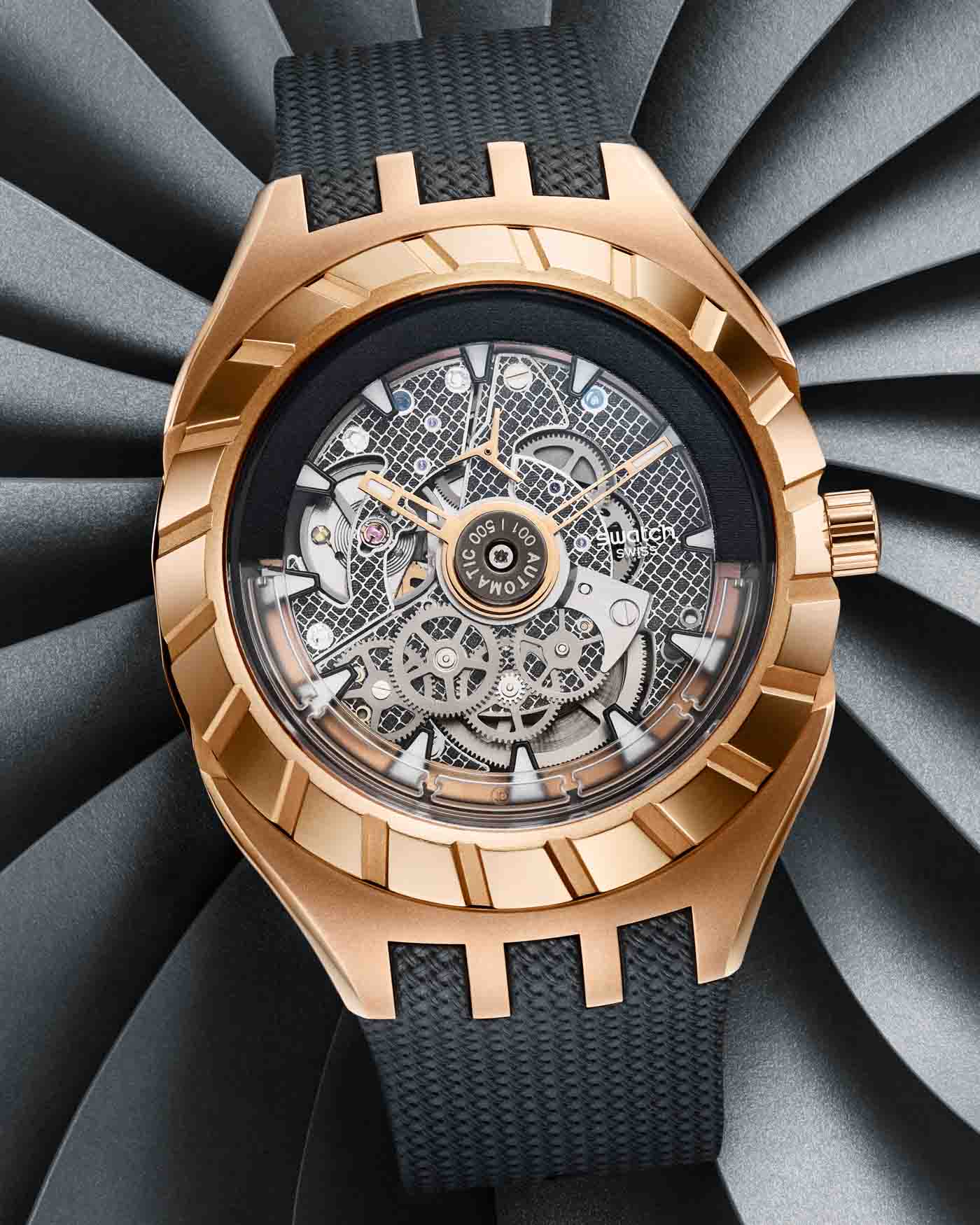 The Swatch Flymagic, with its four lugs, funky bezel, open dial, and Sistem51-based caliber looks cool and is definitely a breath of fresh air both for the brand and the industry. I remain quite baffled by the pricing. Admittedly, I would be a lot less so, had we not had the Sistem51 as unshakable evidence that Swatch is willing, as well as perfectly able, to conceive, design, manufacture and sell mechanical watches for under $200.

There certainly is a vacuum in the low-$1k range of watches for genuinely novel technical solutions; and even if that were not the case, these pieces will be picked up by dedicated collectors and impulsive buyers in a heartbeat. I just hope that Swatch will continue pushing the boundaries of watches in the sub-$200, maybe sub-$400, segment. 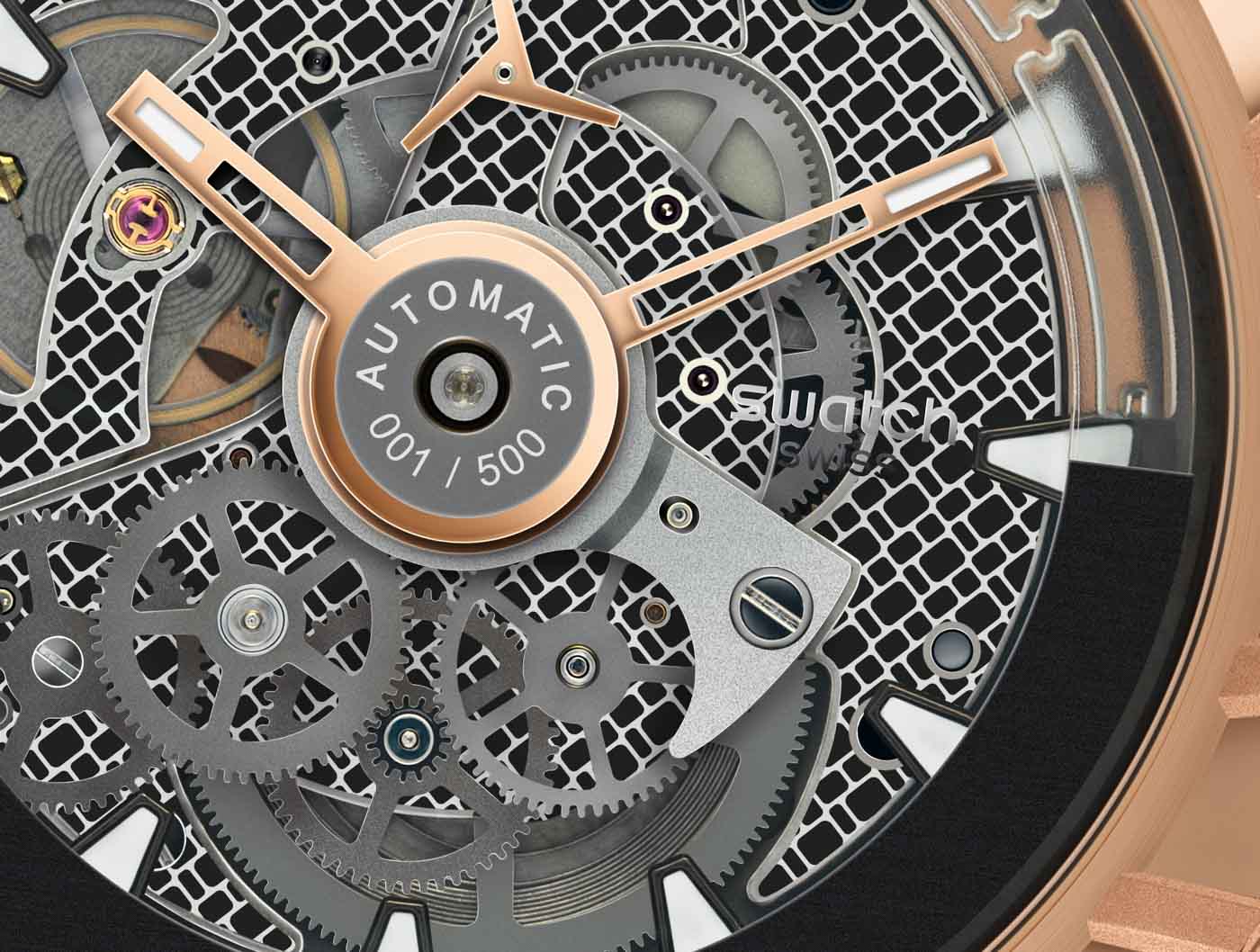 Prices for the Swatch Flymagic start at $1,500 USD and the watches will be available from April 30, 2019 (the birthday of Carl Friedrich Gauss, the German mathematician who found a representation for the unit of magnetism in terms of mass, charge, and time). You can learn more about the Swatch Flymagic, but not Herr Gauss, on the official Swatch website.