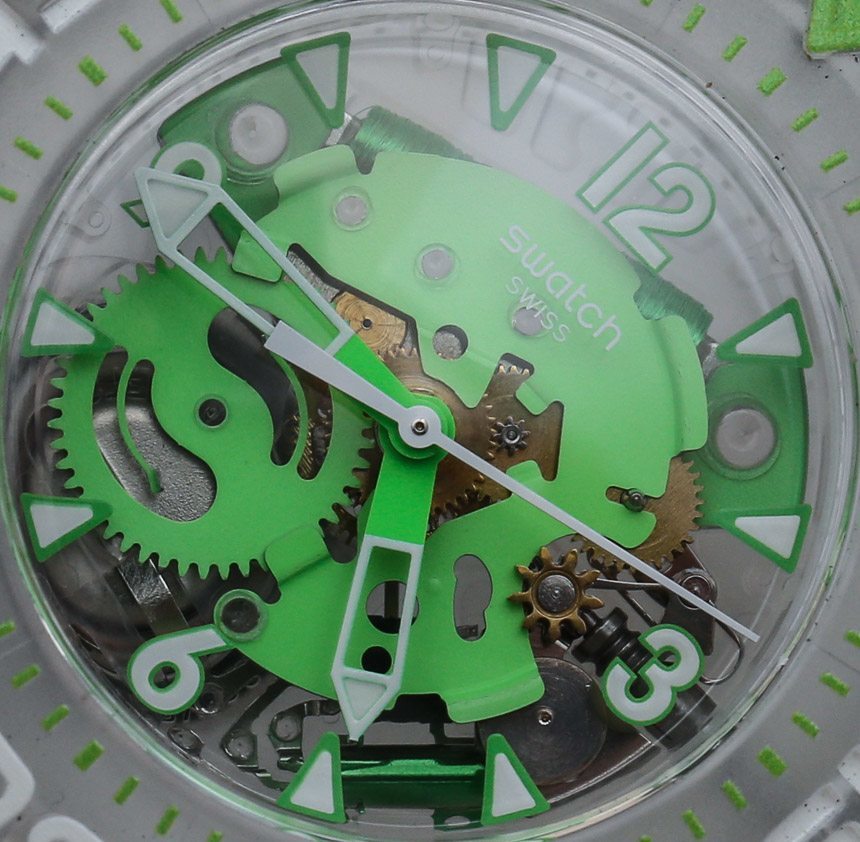 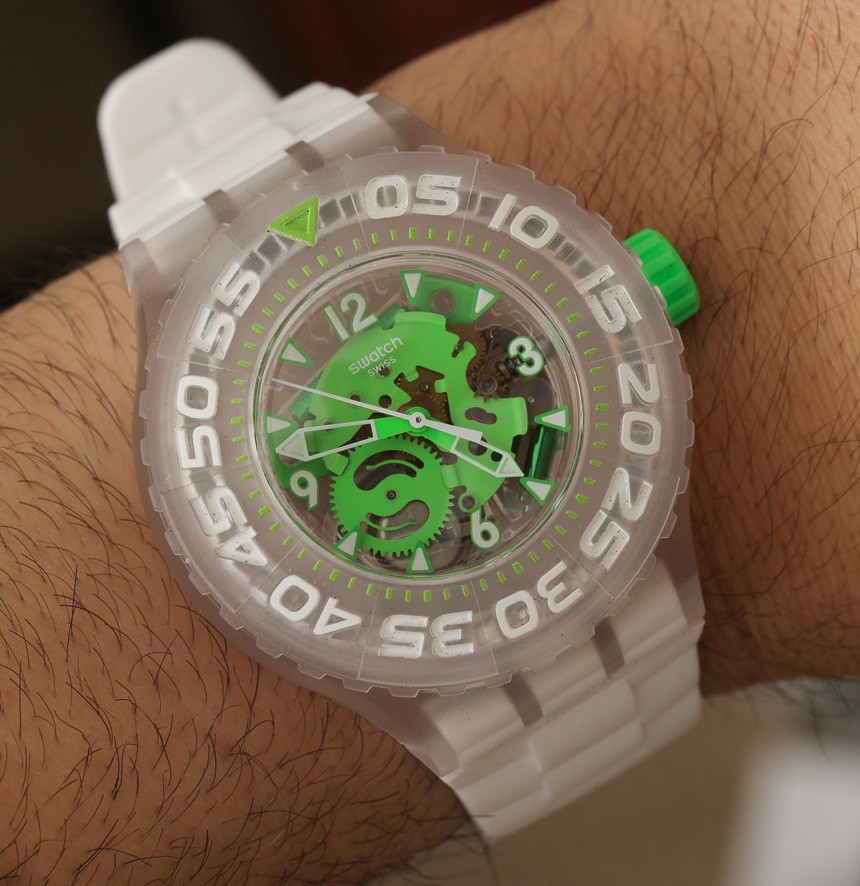 In 2013 Swatch released a clever new collection of dive watches with fun designs and fun names under the Scuba Libre family of timepieces. Scuba Libre wasn’t just a one time collection, but a new range that will include fresh designs over time. While not what we would consider “serious horology” with a price under $100, these make excellent and affordable timepieces for those on a budget with a desire for something bold on their wrist.

This is actually the second aBlogtoWatch Swatch Scuba Libre review. Our James Lamdin did an early review of the Scuba Libre Deep Turtle watch here. That is a slightly more traditional looking piece even though it is in black and green. The Chlorofish is one of a few “fish” versions of the Scuba Libre watch with skeletonzied dials that look pretty cool, if I may say. The Chlorofish combines a clear plastic case with a white strap and green accents on the dial. It is joined by other models such as Scuba Libre Cuttlefish in yellow and black, and Clownfish in white and orange. 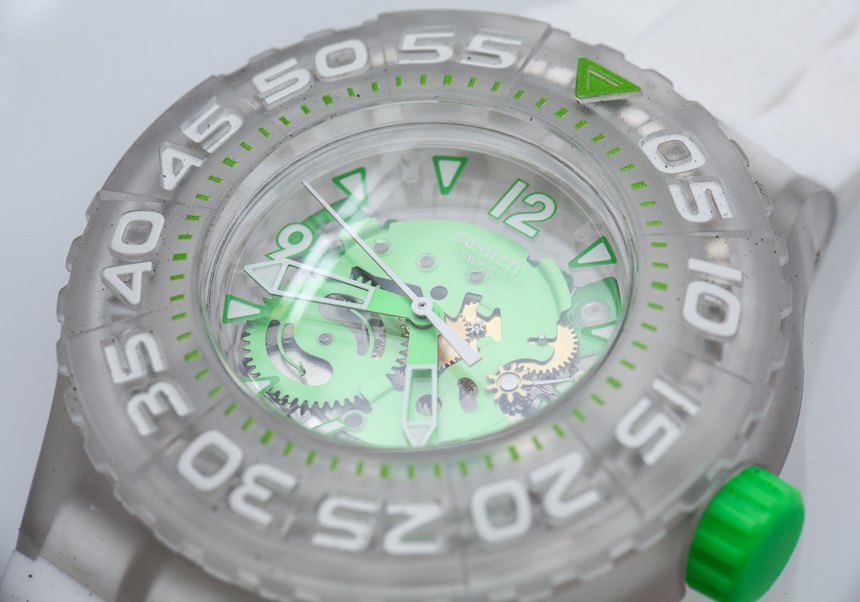 My two favorite elements about the Scuba Libre Chlorofish are the diving style case and the skeletonized dial. Swatch is perhaps the only company who can offer a cool skeletonized quartz movement-based watch for such a cheap price. In fact, you really don’t see skeletonized quartz watches that often at all. Our favorite of those is still the Swatch Random Ghost, which probably has the same or a very similar three-hand movement as the Scuba Libre collection.

The movement doesn’t really require too much discussion as it is rather simple, offering just the time and being battery powered, though it is impressive how cool it looks being skeletonized and so inexpensive. You can see that even though it has a quartz regulator, it still has to have moving parts and metal gears. Swatch is able to put a complete dial over the movement which includes 12 relatively easy to see hour markers and hands. Having said that, legibility could be a bit better. 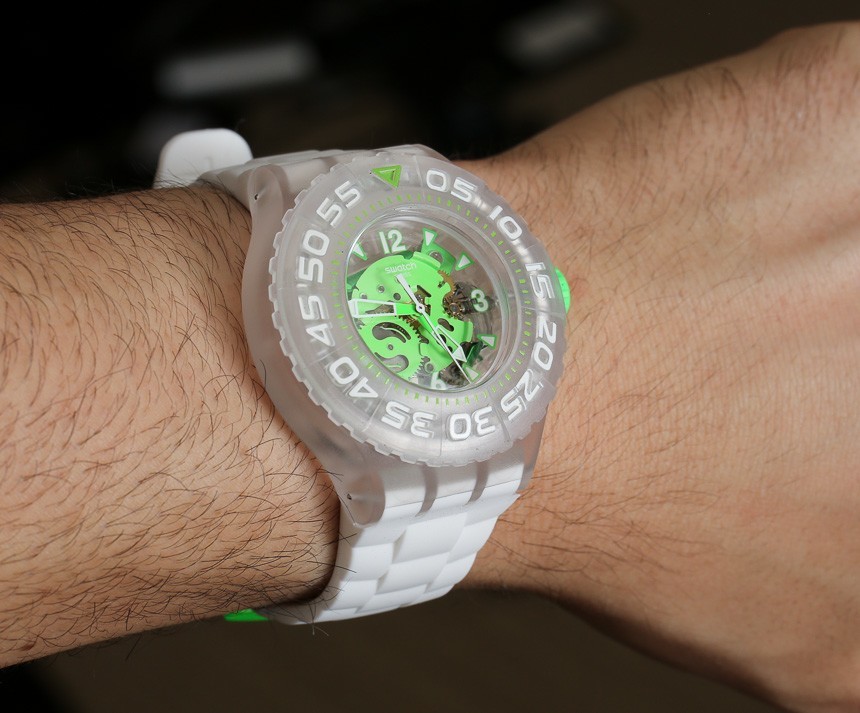 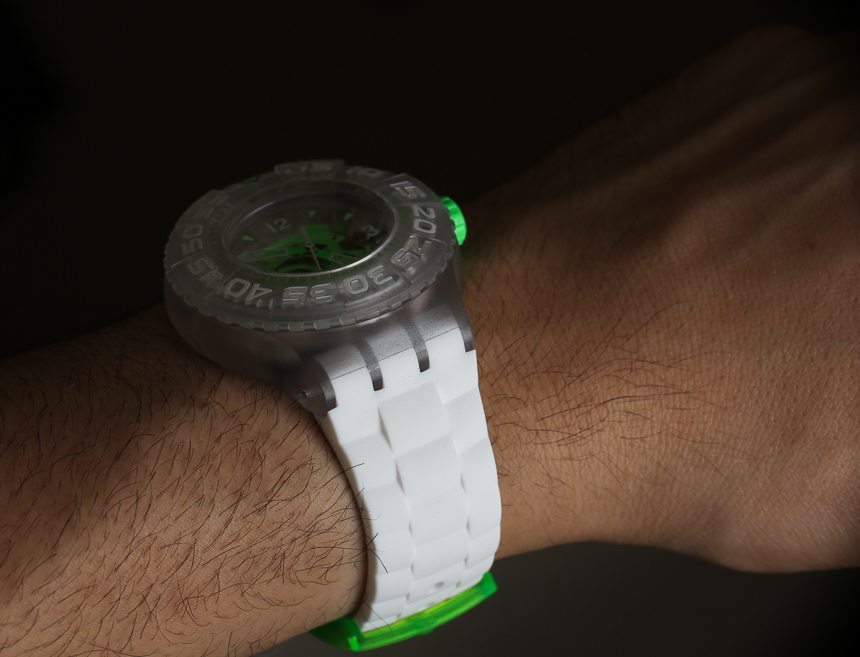 In regard to legibility, I am not sure what Swatch was thinking offering skeletonized hands. I don’t think that being able to see that much more of the movement at all times was worth the trade-off in being able to see the hands themselves. Clearly with electric green and white this isn’t what people are going to purchase as a tool watch, and the legibility isn’t terrible by any means. Though it is an odd choice, it seems to suggest that traditional watch designers are consulted that much at Swatch product development meetings.

Having said that, I continue to remind myself about the affordable price of the Chlorofish, and that few timepieces at this level even hold my attention enough to write this much about them. Whatever Swatch didn’t do in the details of making sure legibility was perfect, they made up for in marketing and overall presentation. The Scuba Libre collection is perhaps the most impressive “new” thing from Swatch in a while, and I think they have something very clever in combining the appeal of a summer sport watch with the trendy color play that the brand is so well-known for. 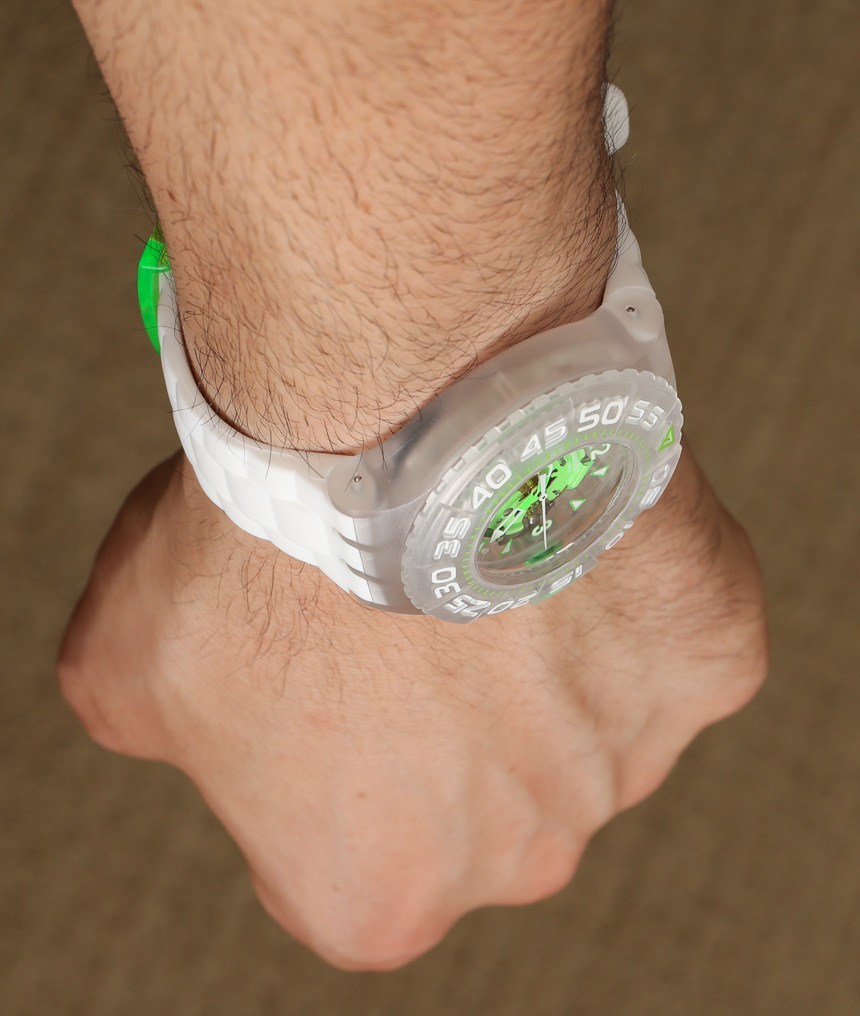