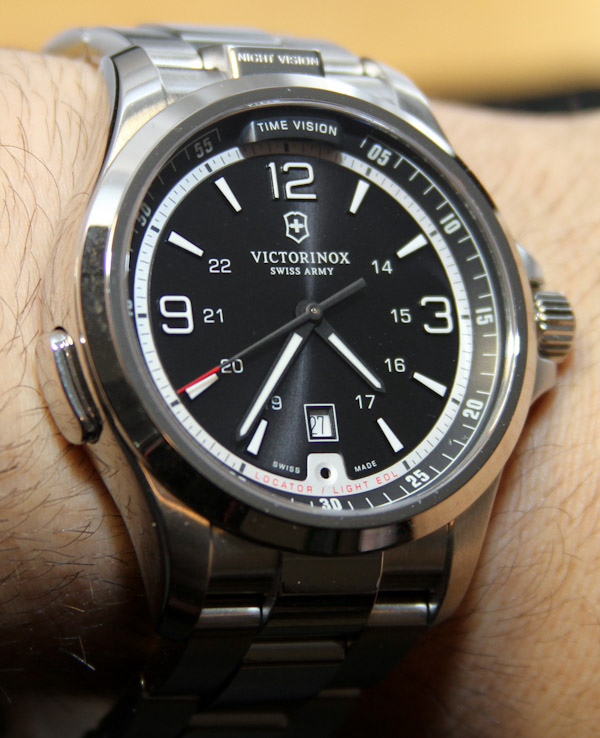 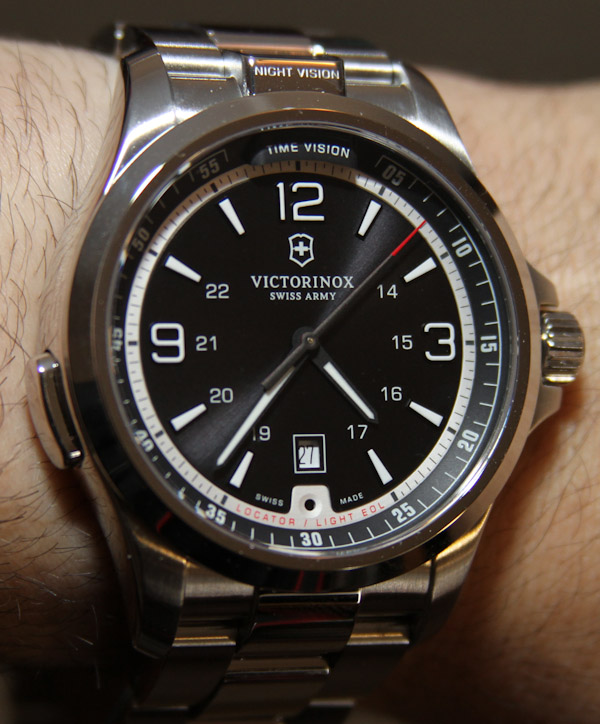 This watch would be the Victorinox Swiss Army Night Vision III, but Swiss Army decided to drop the numerals from the name and stop counting. That makes sense as in the future it could get a bit silly assuming they started to release seventh and eighth version variants. For the newest Swiss Army Night Vision model the classic “see-in-the-dark” watch gets a more formal skin and pretty demeanor.

Anyone new to the concept of the Night Vision watch is encouraged to visit Swiss Army’s dedicated micro site that has interactive animations and an understanding of system. It isn’t very complicated sure, but telling people that a dress watch with a flashlight actually doesn’t need to look strange will prompt them to check it out. And that is true, this is a dress/casual sport watch with a flashlight that doesn’t look strange. It isn’t a new concept for the brand, but it remains a solid concept. 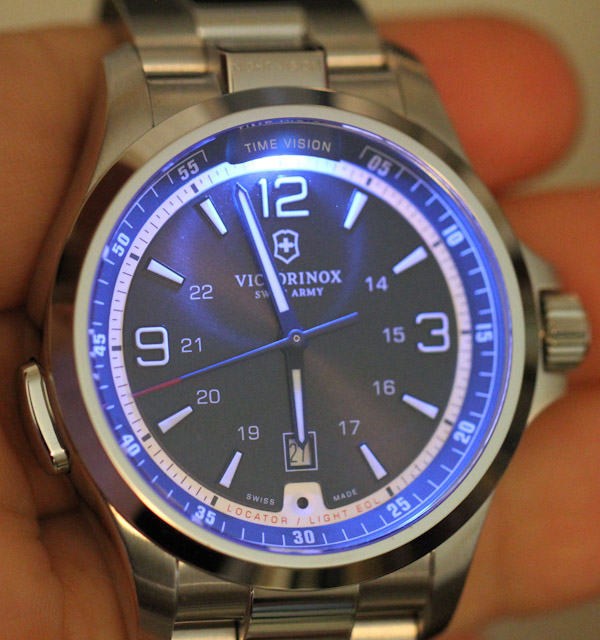 The first thing I noticed about the Night Vision watch while wearing it was that it reminded me of my Blackberry. Why? Well they both have little flashing red lights on them. Though my Blackberry only does that when I have new e-mails (which is mostly all the time). Thankfully, those annoyed by the blinking red light located at 6 o’clock can turn it off with five rapid presses to the pusher on the left side of the case. Swiss Army calls it a locator light, and the idea is to let you find your watch in absolute darkness. It blinks once each ten seconds. That’s kinda cool, and like I said it can be activated or deactivated.

The locator light also doubles as a battery life indicator, or rather battery death indicator. However, I am not sure which battery it refers to (maybe both). You see, Swiss Army notably designed the Night Vision with two batteries. One is used to power the Swiss quartz movement that tells the time and date, the other battery (a 3 volt lithium 2032 cell) is there for the light functions. That’s smart because if you go wild and use up all the light juice, at least you won’t be stuck without the time. So whatever battery the little LED is connected to, it will start to blink wildly when you need to replace it. Swiss Army is quite thoughtful in its dial messaging – which is nice. Assume for example it has been years since you’ve read the manual, the area around that light is labeled “Locator/Light EOL” (end of life) so that you don’t need to recall all the ins and outs of the piece and what all the lights mean. That is good thinking and something the Japanese for example should consider a bit more (where the perception is more about total function versus easy to use function). 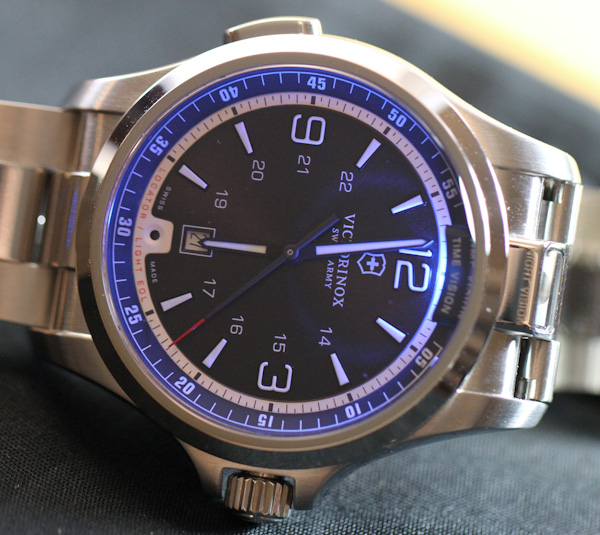 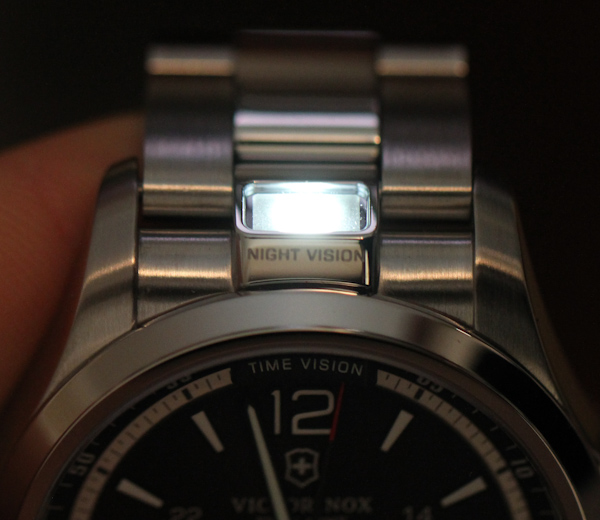 That blinking red LED light is one of three on the Night Vision watch. The second one is located adjacent to it on the other side of the watch over 12 o’clock. This is a blue colored LED which has the distinct function of lighting up the watch dial. A single push to the light button activates this light for a few seconds, long enough to read the dial. Some welcome redundancy has Victorinox Swiss Army also putting luminant on the hands and hour markers. That means that there is a good chance you’ll be able to read the watch in low light even without the blue LED light activated. Unlike some other LED lights now used to light up watch dials in the dark, the one on the Night Vision works very well and offers a full and complete view of the dial. Other watches less well-engineered suffer from having LEDs that simply don’t offer enough light. The label “Time Vision” is rather straight-forward to define the purpose of the light it is over – and sort of charmingly cheesy when you say it out loud. Hell, I’d like “time vision” too.

Victorinox Swiss Army offers the Night Vision in two dial colors (light or dark), and on a steel bracelet or leather strap. I think most Swiss Army aficionados are going to want the decent bracelet. The wide bracelet is conservative and helps keep the watches from looking too small. It has a butterfly style deployant and safety clasp. It isn’t the epitome of high-end in feel, but is remarkably solid when closed. Nothing worse than a flimsy clasp that flops around. 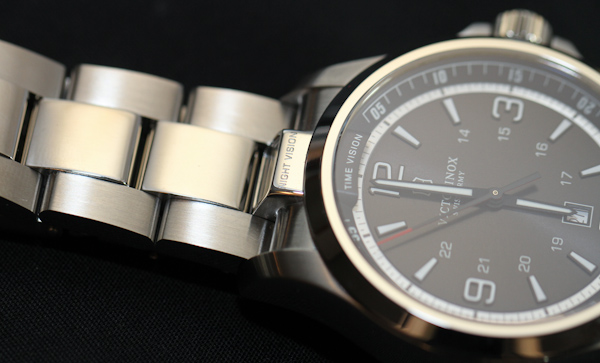 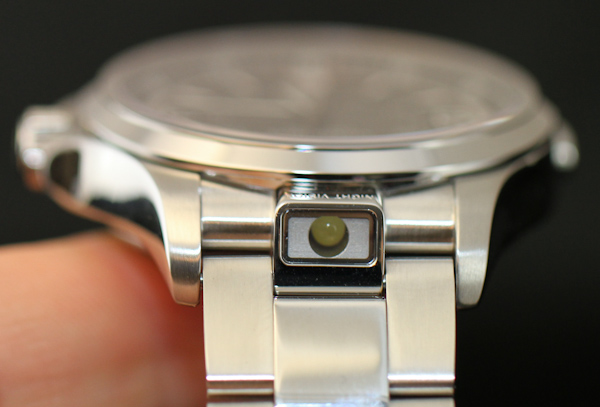 Swiss Army did a good job of “hiding” the lights on the watch. That was sort of the point of this newest generation Night Vision design. I believe that it was to retain all the features popular in the Night Vision, but create a more formal, dressy look. In that, I feel that Swiss Army has succeeded. The dial is pleasant and easy to read. The hands feel a tiny bit too small, but they are pretty good. I think that I feel that way because I am mostly used to Swiss Army having larger hands on their watches. The dial is also not flat. There is one level for the white minute scale ring, then a higher level for the rest of the dial, and the hour markers are seemingly applied. An angled flange ring helps the dial look its largest.

The last of the three, and probably most important light on the Night Vision is on the outside of the case facing forward above 12 o’clock. Here lives a white LED light that has a few functions. Most people will use it as a low-powered flashlight. Low-powered yes, but still powerful enough to shine in front of you and offer helpful illumination in the dark. Swiss Army doesn’t make claims about projected light-mode battery life. I mean it really depends on the usage right? Most seem to automatically turn off after a little bit to save power of course. The external light would be easy for a lot of people to miss if it were not for the (also easy to miss) “Night Vision” label. 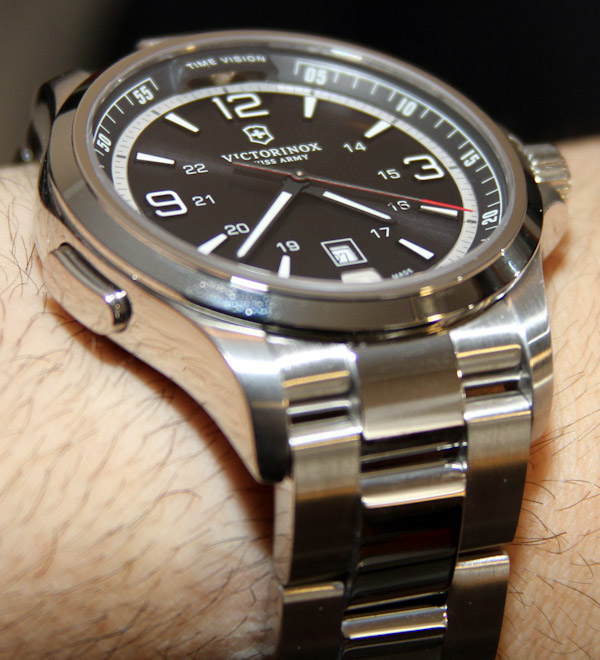 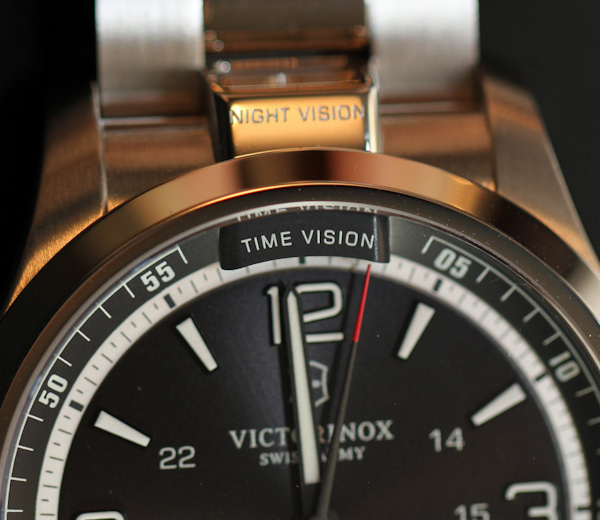 This little flashlight has three modes. First is activated with two presses of the light button and it merely activates the light. It will actually stay on for a full two minutes if you don’t press the pusher to manually turn it off before that time. Three presses and the “signal mode” comes on. Here the light flashes quickly like a strobe for two minutes or until manually deactivated. Last is what Swiss Army calls “intense signal model.” This is activated using a five second press to the pusher (and deactivated the same way). This function is a slow, yet bright strobe which is meant to act as a signaling or location beacon. I think Swiss Army would have been clever to put these instructions on the rear of the watch case.

This new Night Vision (ref. 241569) watch comes in an all steel case that is 42mm wide. The case wears a bit small given the thicker polished steel bezel and the length of the lugs. That isn’t bad, but it is worth noting for prospective customers. The case has a sapphire crystal with AR coating over the dial and is also water resistant to 50 meters (no screw-down crown). Inside of the watch is a Swiss quartz movement. 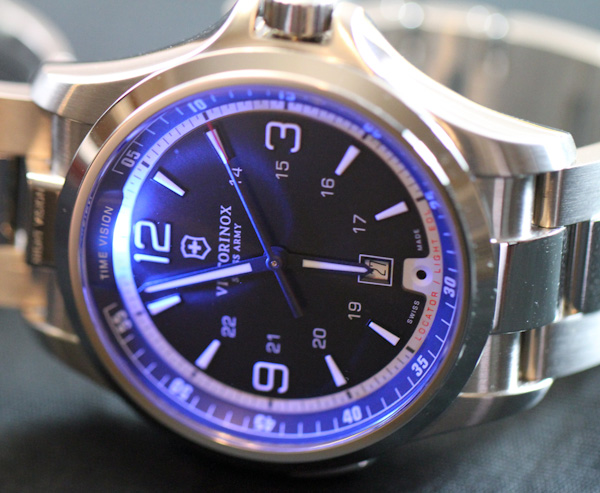 One of the things I really like about Victorinox Swiss Army watches is their dedication to value. While they have higher-end watches costing a few thousand dollars, their sub-$1,000 watches are their most popular and offer good quality and design for the money. They also don’t skimp on ergonomic and utility considerations. I suppose that they take the fact that “Swiss” is written on the dial very seriously.

The newest generation Night Vision is no longer just a sport watch, but a dressy casual watch with a slightly hidden flashlight feature. That pretty much makes it a fun and useful gadget watch from a brand which has a reputation for knowing what they are doing. Retail price for the Victorinox Swiss Army Night Vision watch is $695. swissarmy.com

Necessary Data
>Brand: Victorinox Swiss Army
>Model: Night Vision
>Price: $695
>Would reviewer personally wear it: Yes
>Friend we’d recommend it to first: Button-up shirt and pants guy who happens to lose stuff in the dark a lot.
>Best characteristic of watch: Well made for the money and the light features are not well-conceived, but actually quite useful.
>Worst characteristic of watch: Recalling all the light functions requires a study of the manual – a bit more sporty looks would not have hurt.