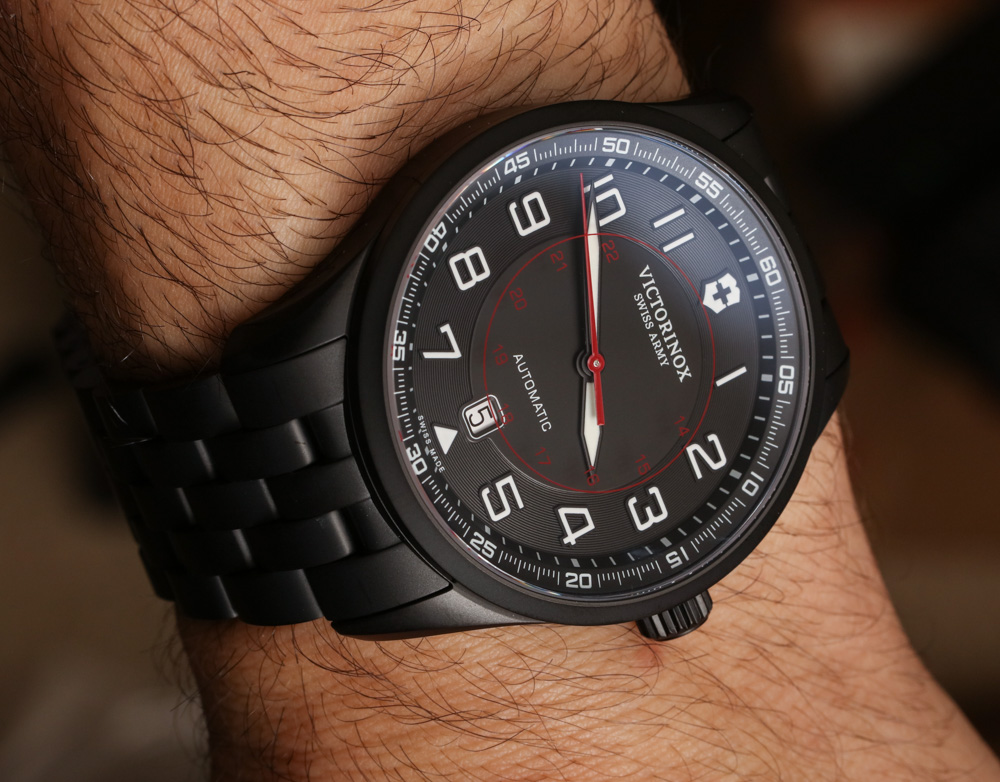 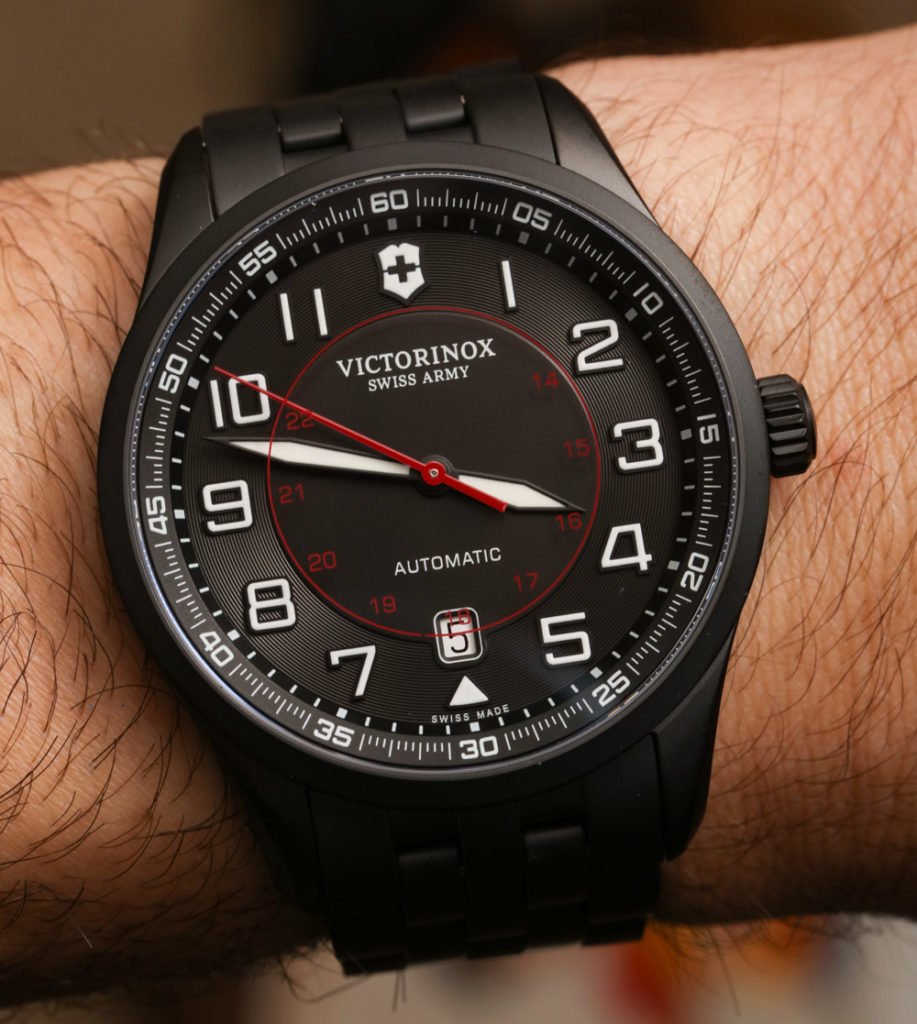 Once in a while, I find it opportune to review a watch twice – well, sort of. I previously reviewed this Victorinox Swiss Army Airboss Mechanical Black Edition reference 241720 watch on a strap, and now I am following up with another review article on the same watch on a bracelet that is known as the reference 241740. At the time of the original review, Victorinox Swiss Army did not offer this particular watch on a bracelet, but only a strap. A matching matte PVD-coated black steel bracelet was later added (which sometimes occurs in the watch world), making for what I feel is a very different-feeling timepiece. 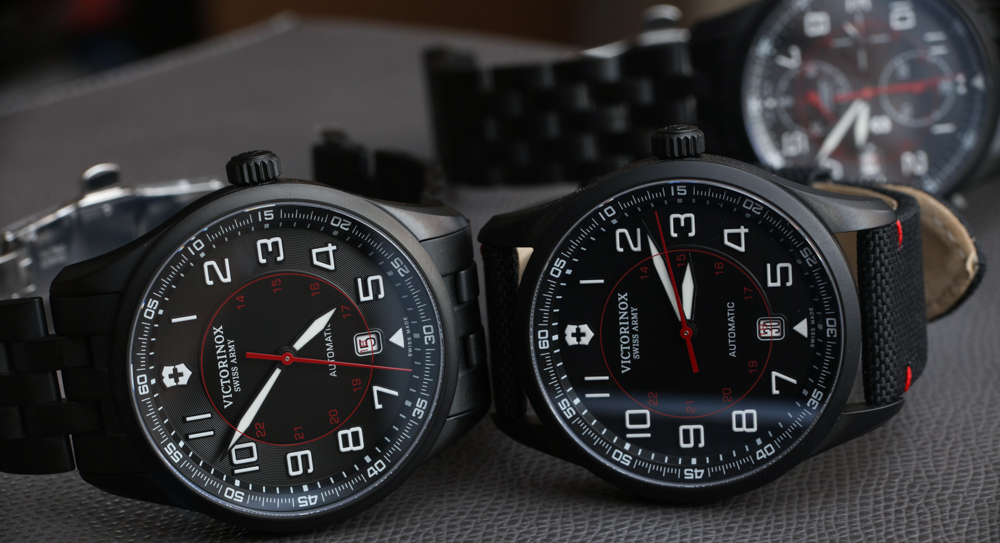 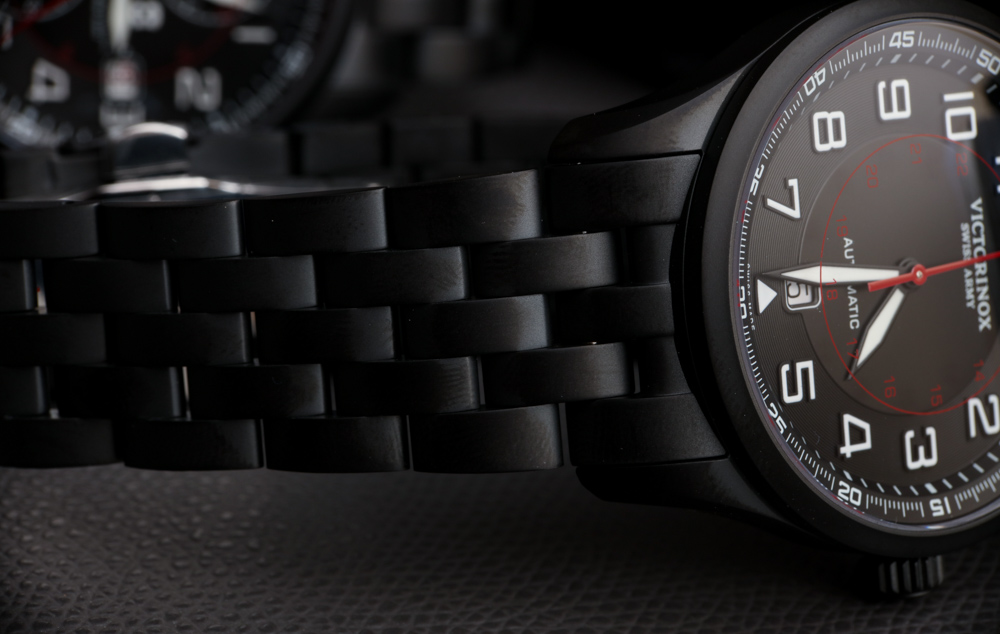 Originally, I wanted to simply update the original review with some new images, but then I realized I simply had too much to say on the topic. So this follow-up review is not only about the bracelet option for the Victorinox Swiss Army 241740, but also some additional feelings on what I think is a very capable watch.

The original Victorinox Swiss Army Airboss Mechanical Black Edition came on a nice black fabric strap with a bit of red-colored stitching to match the dial accents. It was handsome, but it felt incomplete to me, even though I really liked the watch. The Black Edition itself was a slightly more “macho” military style watch based on the un-coated steel version of the Airboss. This latter model was fine, but the added personality of the masculine sandblasted black case and high-contrast legible dial make the Black Edition “the one to have,” in my personal opinion. 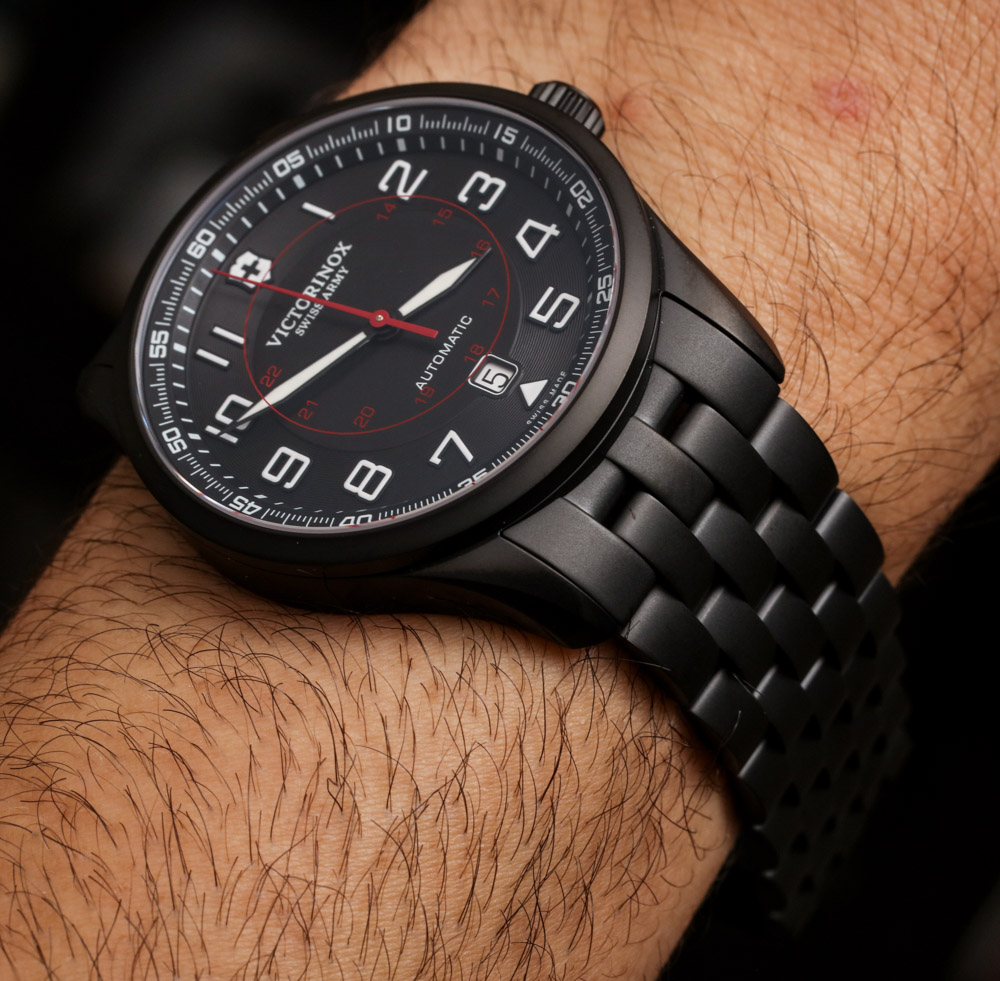 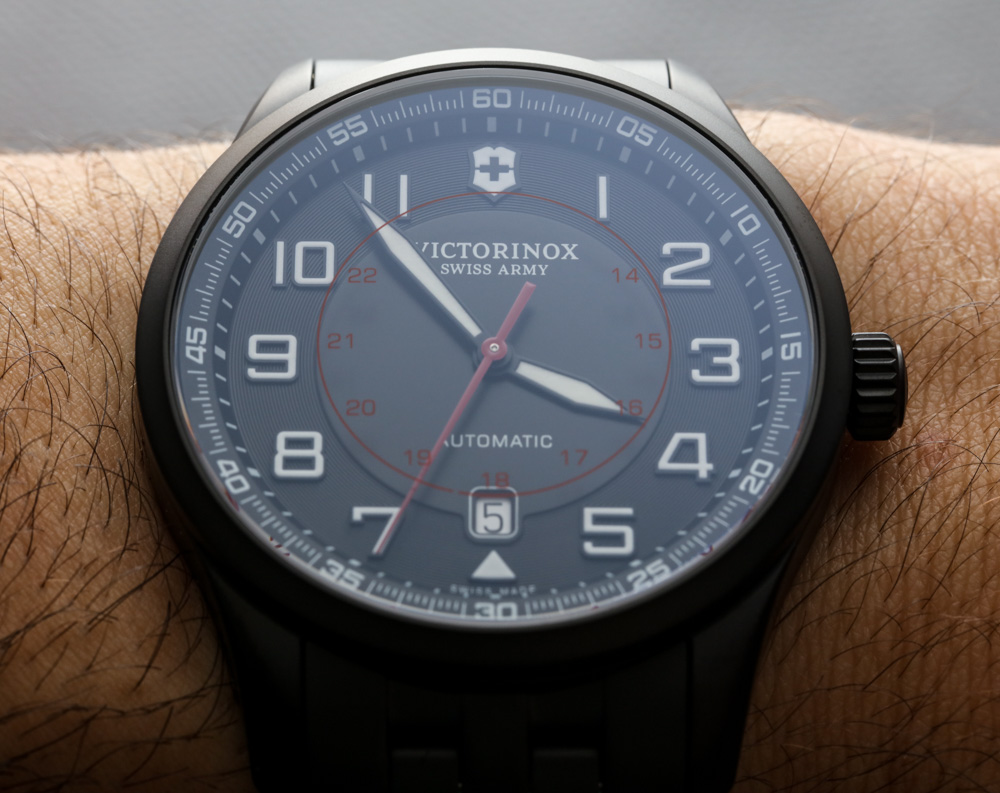 Now on a matching PVD-coated black steel five-link bracelet, the Victorinox Swiss Army Airboss Mechanical Black Edition feels complete. I nicked-named it the “full metal jacket,” given that with the case and bracelet your wrist is totally enveloped with metal. It helps that this is a clearly military-inspired watch. What, the “Swiss Army” part of the name didn’t make that clear? Perhaps from now on I’ll refer to all watches on a bracelet that have a strap option as the “full metal jacket” version. Should that stick? I will also mention that Victorinox Swiss Army was nice enough to include a half-link, which helps a lot in sizing the bracelet to fit. 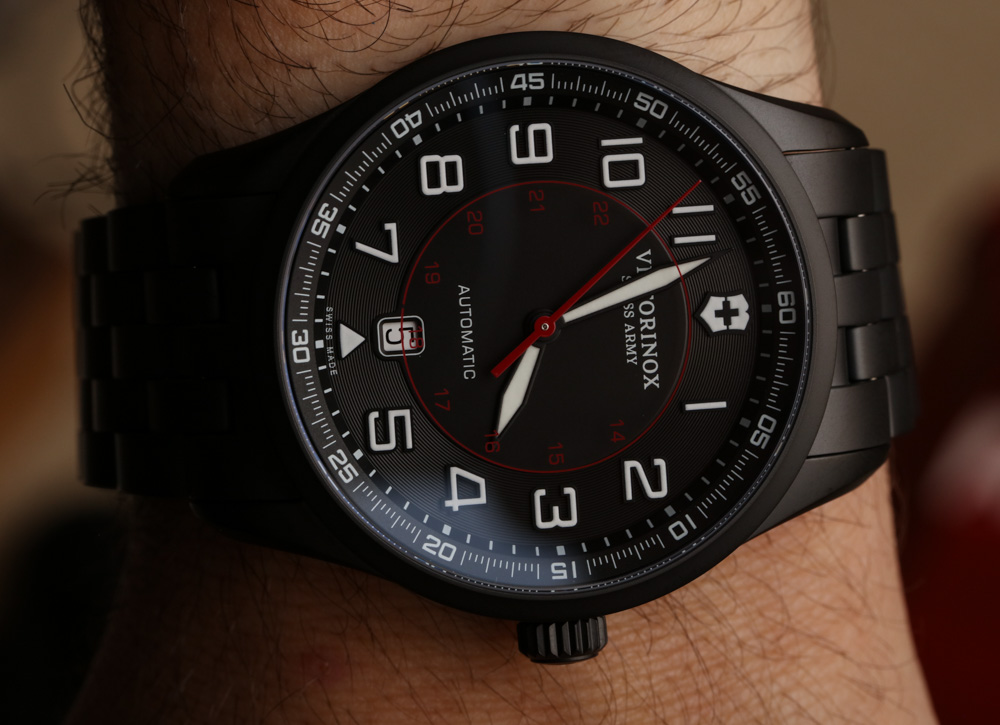 The five-link bracelet is comfortable and good-looking, and it is reasonably designed once you understand it. The deployant clasp is butterfly-style with a small safety latch. This allows for a relatively flush design without a major “bulge” where the deployant is. Though, it isn’t per se as secure as something which would truly be a rugged military watch. Therein lies a sort of contention in the overall design. This is a watch that is designed to look good and suggest an active, military style. It is not designed with real military use in mind. There are similar watches out there that might be, but this is like a sexy fashion watch that you don’t need to worry about getting wet or dirty. 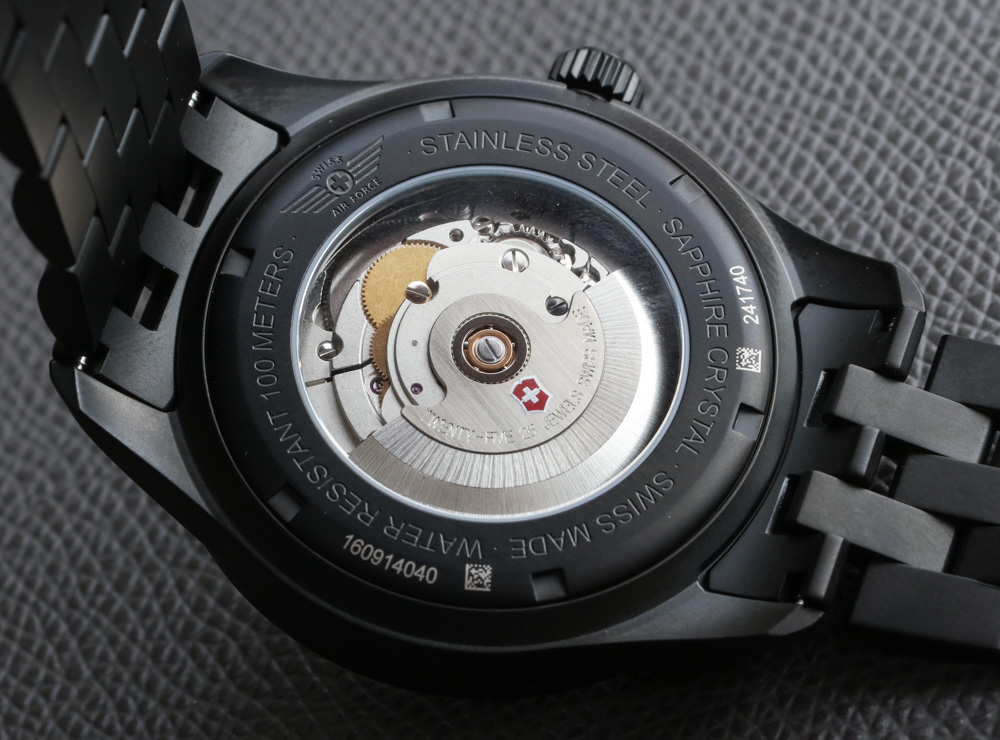 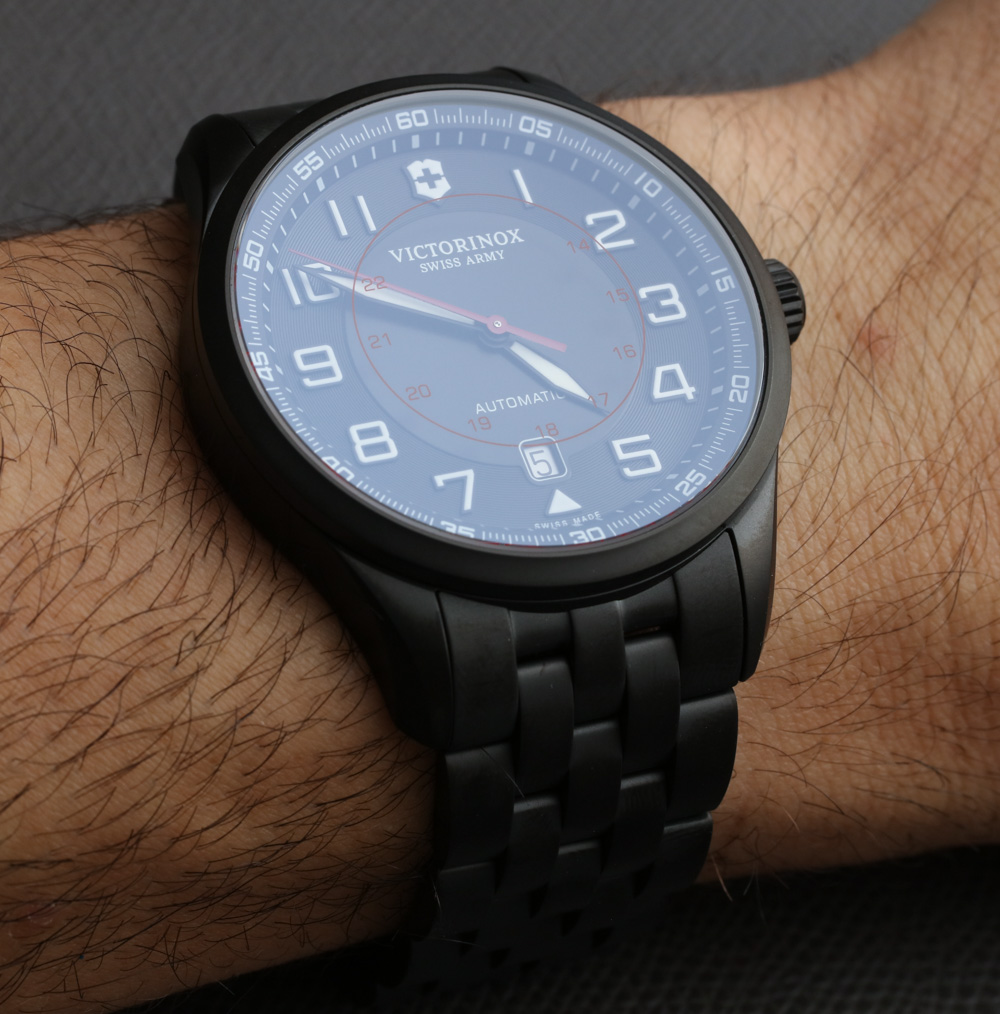 That might be a strange distinction to make, but I clearly think about these things often. Victorinox Swiss Army, with their vast range of products, is both a fashion label and a tool maker. It just depends on the products you are talking about (pocket knives versus jackets). This watch feels right smack dab in the center of the brand being a hybrid of both worlds – but not perfect in each. It is too refined and stylish to be something meant for pure utility, but it is also “too enthusiast” for the mainstream fashion market, with a mechanical movement and circa $1,000 price. Yes, it will appeal to plenty of consumers, but I also think that a timepiece like this, from a brand like this, is a perfect example of what many “better” fashion watches are today. 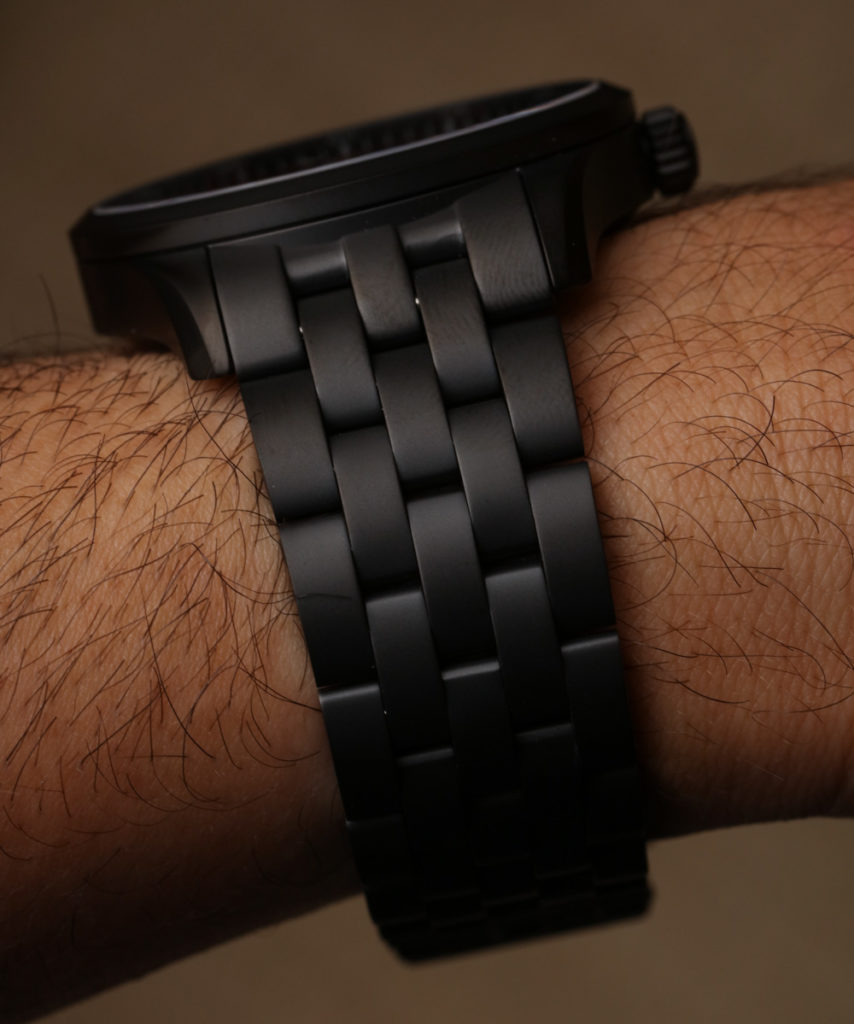 At 42mm wide with 100 meters of water resistance and a flat AR-coated (underside) sapphire crystal, this is a relatively durable and comfortable watch. The added visual appeal of the bracelet makes it a bit more “mature,” in my opinion, compared to the version on the strap. I continue to love the bold, legible dial with its quirky red 24-hour scale ring printed on the underside of the sapphire crystal. This element helps add visual depth to the already not-flat dial. I chuckle each time I glance at the date window over 6 o’clock when I see the ring literally bisect it. Yes, this is a technical design glitch that probably should have been avoided, and yet it still doesn’t really bother me (no doubt there are others out there with more enhanced date window OCD that would remark otherwise). 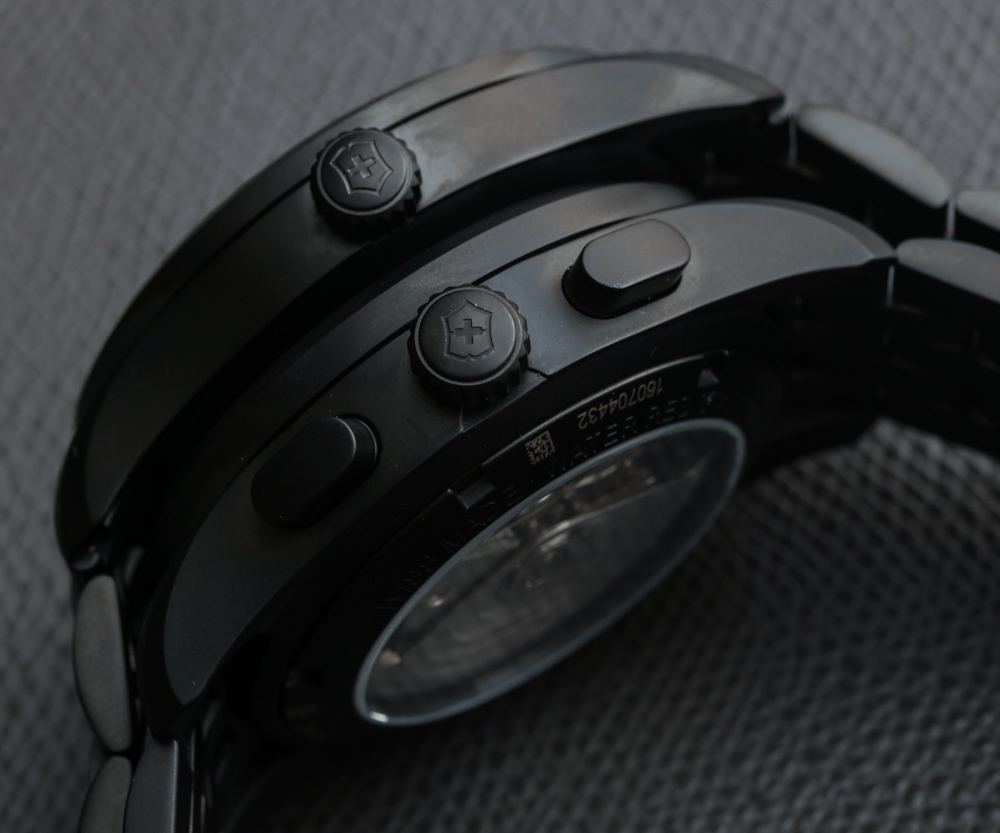 At the time of writing this article, we have not yet published the upcoming separate review of a companion product to the Victorinox Swiss Army Airboss Mechanical Black Edition, which is the Victorinox Swiss Army Airboss Mechanical Chronograph Black Edition. The Chronograph version of this watch comes in the same 42mm-wide case size, though with its thicker Swiss ETA Valjoux 7750 movement, the case is also thicker. I wouldn’t say that I prefer this three-hand model or the chronograph, as they both have distinct appeal. I did, however, want to mention that there is a chronograph version. I will say that the “Black Edition” Airboss Mechanical models are, for the most part, a lot more interesting to me than the more standard models which are great for mainstream audiences but a bit too conservative for my tastes. 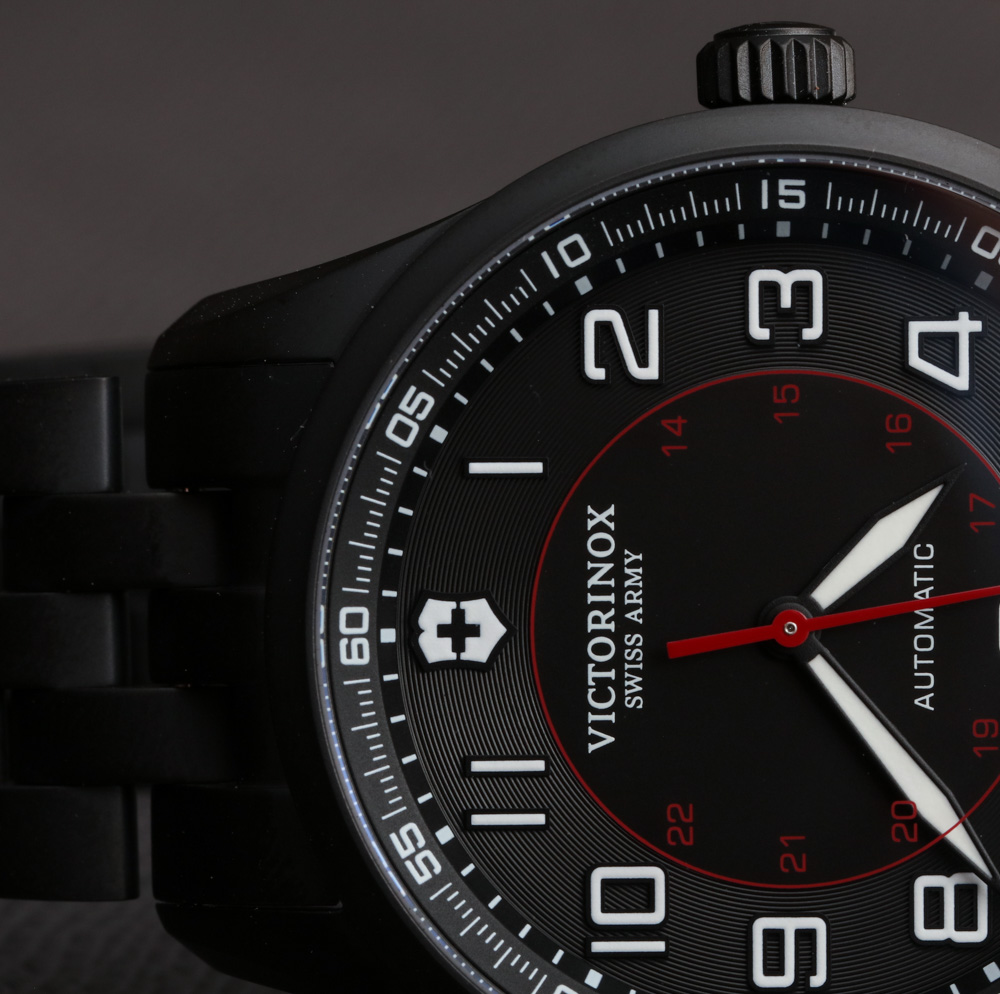 Inside the Victorinox Swiss Army Airboss Mechanical Black Edition is a base Swiss ETA 2824 automatic movement which offers the time and date. It operates at 4Hz with about 38 hours of power reserve. You can also view the movement through the display caseback, which is a nice touch and helps remind that this is among Victorinox Swiss Army’s higher-end timepiece offerings. I don’t know the exact split, but I am guessing that the majority of the watches they produced (and sell) are quartz versus mechanical. 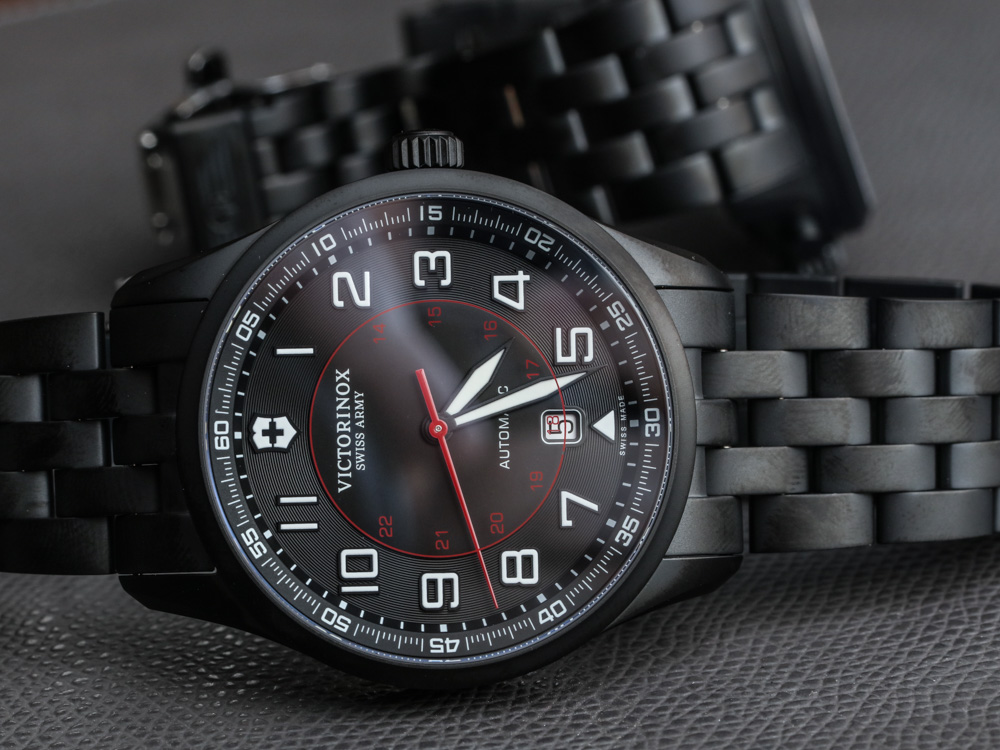 For more technical details and information about this watch, I recommend you check out my review of the Victorinox Swiss Army Airboss Mechanical Black Edition 241720 (linked to above). For me, the addition of the matte PVD-coated black steel bracelet in the reference 241740 edges out the previous model in style and value (even though the bracelet adds $100 to the total cost). As a daily-wear with a military look, yet refined sense of European elegance this is a tough watch to beat – especially for the money. Retail price for the Victorinox Swiss Army Airboss Mechanical Black Edition 241740 is $1,095. victorinox.com