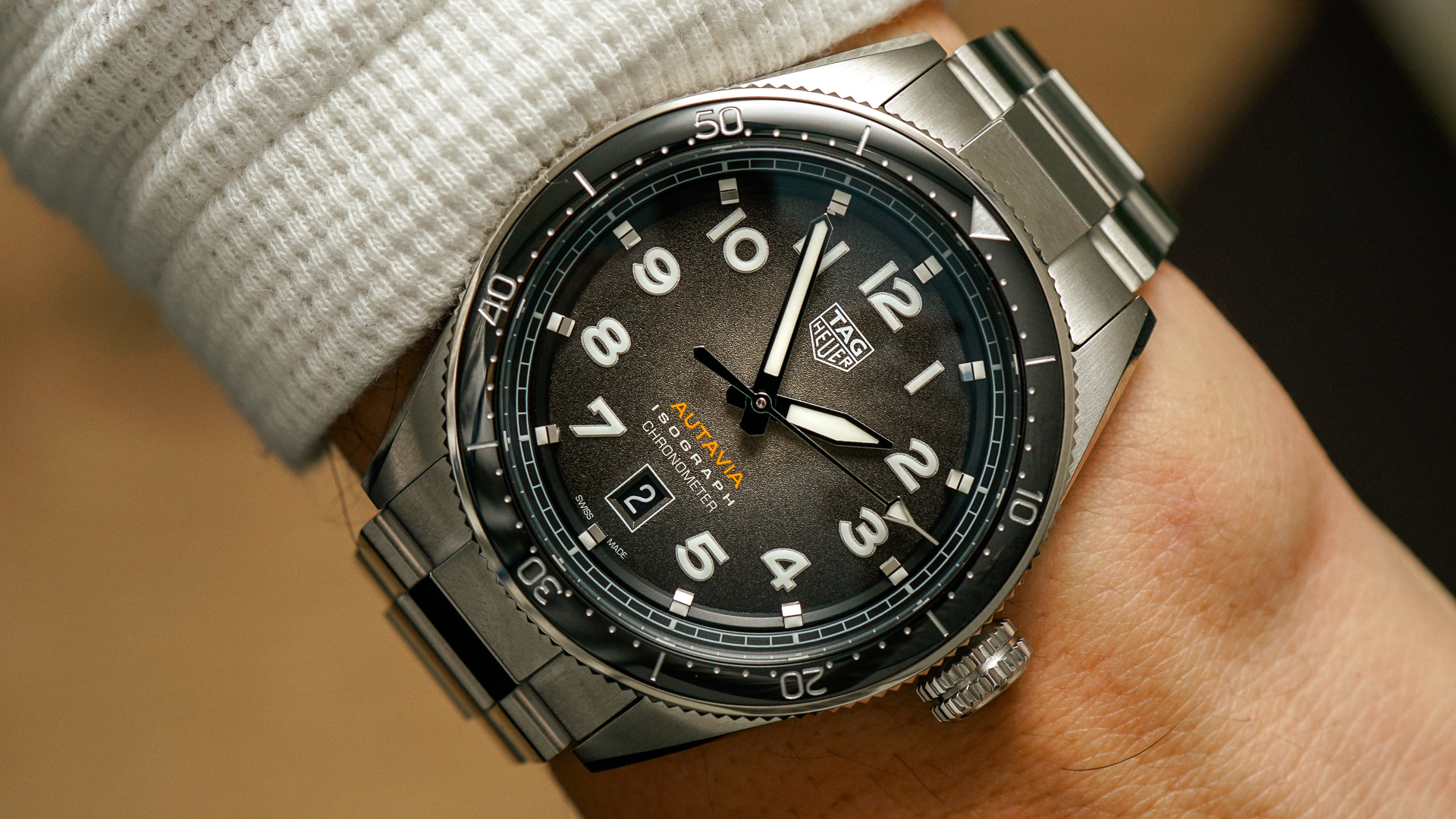 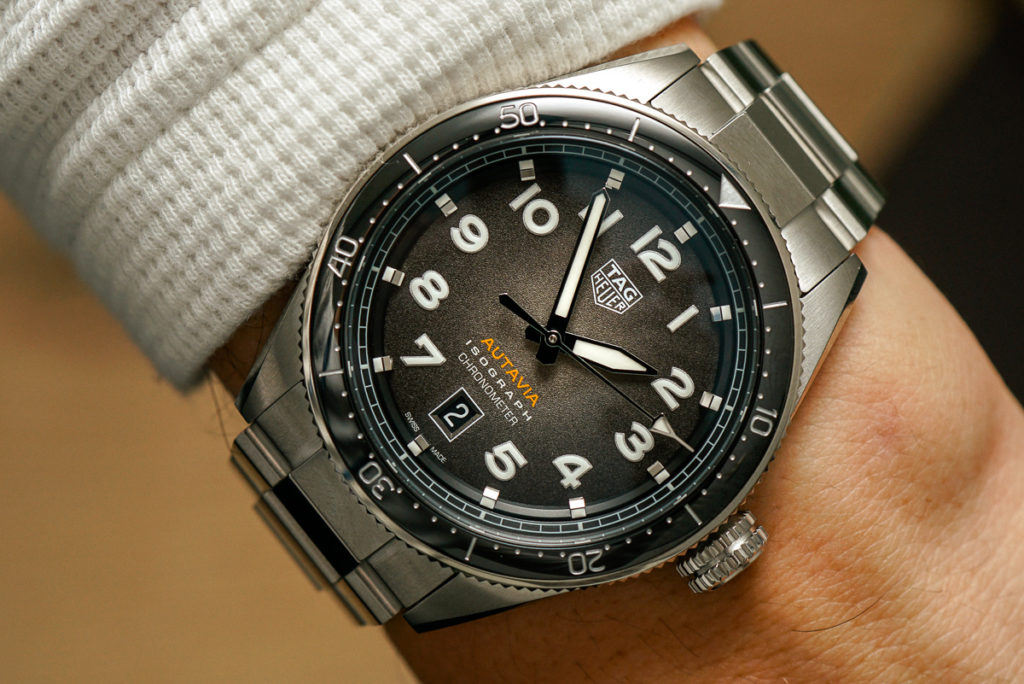 It takes a certain kind of crazy to produce a three-hand version of one of the most iconic sport chronographs of all time, but TAG Heuer has never been shy about stirring the pot — even when it comes to its own history. Though Autavia in name only, its newest permutation still looks to do its namesake proud with an expertly proportioned case, a fresh, multi-layered dial design, a new toolless strap-change system, and a chronometer-certified movement with TAG Heuer’s new carbon composite hairspring technology. Even if it still feels a little visually safe, the new Autavia Isograph boldly skips the design cues established by its predecessor (y’know, that legendary multi-sport chronograph from the mid-’60s and ’70s) in favor of an all-new visual direction that hints at the future for TAG Heuer without totally forsaking its past.

Could you imagine a three-handed Speedmaster or Daytona? Just as I remember the odd feeling of sacrilege when sliding a Navitimer sans chronograph on the wrist, putting on the new three-hand TAG Heuer Isograph for the first time triggered the same reaction. But those sensations quickly passed, and what we’re left with is a safe, but markedly enjoyable and compelling, modern sports watch with a sneaky amount of forward-thinking technology under the hood. Ultimately, if you’re not sold on seeing more “’tavia’” than “auto” in this sporty mechanical icon, you’re probably best sticking with one of the Heritage models (like the recent Viceroy re-issue), which adhere to the original blueprint with impressive accuracy. Otherwise, I’d argue the Autavia name was never meant for literal interpretation, but rather to imply capability and versatility — which the new three-hand models bring in spades. 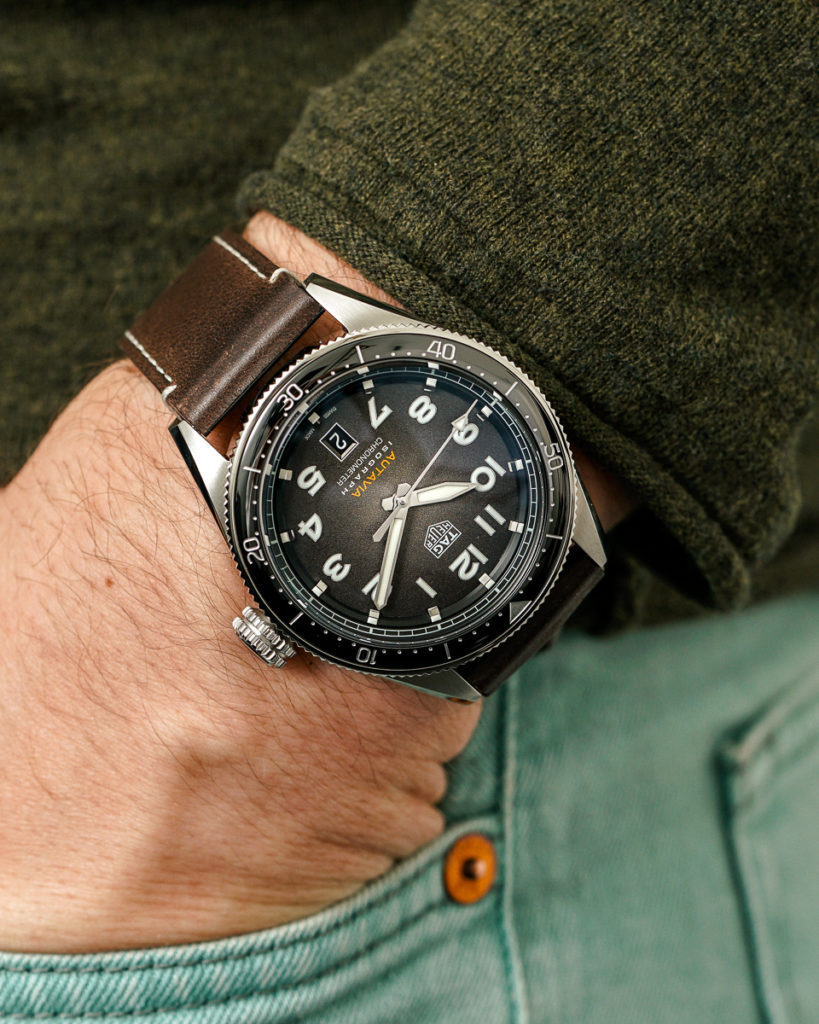 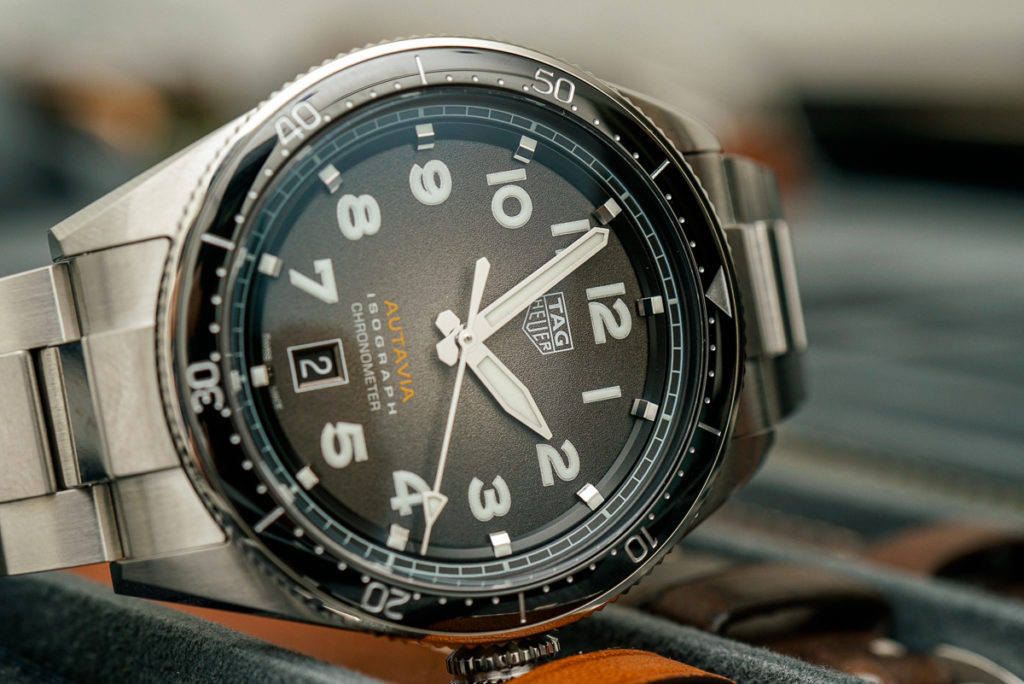 Since its creation in 1933 as a dashboard clock, the word “Autavia” has always been a portmanteau of the words “automobile” and “aviation,” aimed at its intended end-user, but with so much of TAG Heuer’s product catalog historically wrapped up in auto racing via the Carrera and the Monaco, it actually makes sense that the new Autavia skews more toward aviation than motorsport, due to its ultra-legible dial and bi-directional rotating timing bezel. It’s here that the Autavia starts to make more sense in its three-hand form — it’s simply TAG’s interpretation of the sporty and classic pilot watch, filling a void in the collection that’s existed for a very long time. 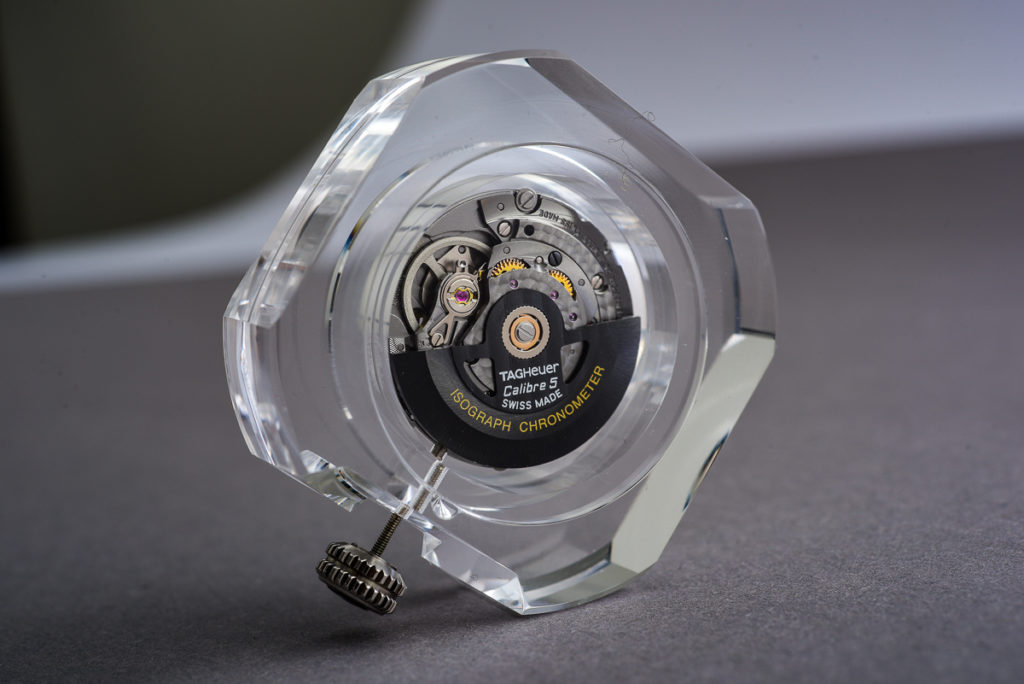 As Ariel discussed in great detail in his news story on the Autavia Isograph, the watch is fitted with TAG Heuer’s Calibre 5 movement, which has been upgraded with its “Isograph” carbon composite hairspring, hinting at what’s likely to be the future standard of all of TAG Heuer three-hand automatic movements. We first saw this back in January during SIHH, when it seemed more like concept (albeit highly practical) technology, so it’s cool to see TAG Heuer already rolling it into more entry-level watches like the Autavia. Echoing some of Ariel’s prior sentiments, there are plenty of end-user benefits with the Isograph technology, as these hairsprings are neither metal nor silicon, meaning they’re simultaneously non-ferrous, and highly flexible, more durable than current silicon hairsprings. But perhaps more importantly – and likely why we’re already seeing them deployed in more economical watches – they can be produced in volume more cheaply than the aforementioned alternatives, and this is crucial. 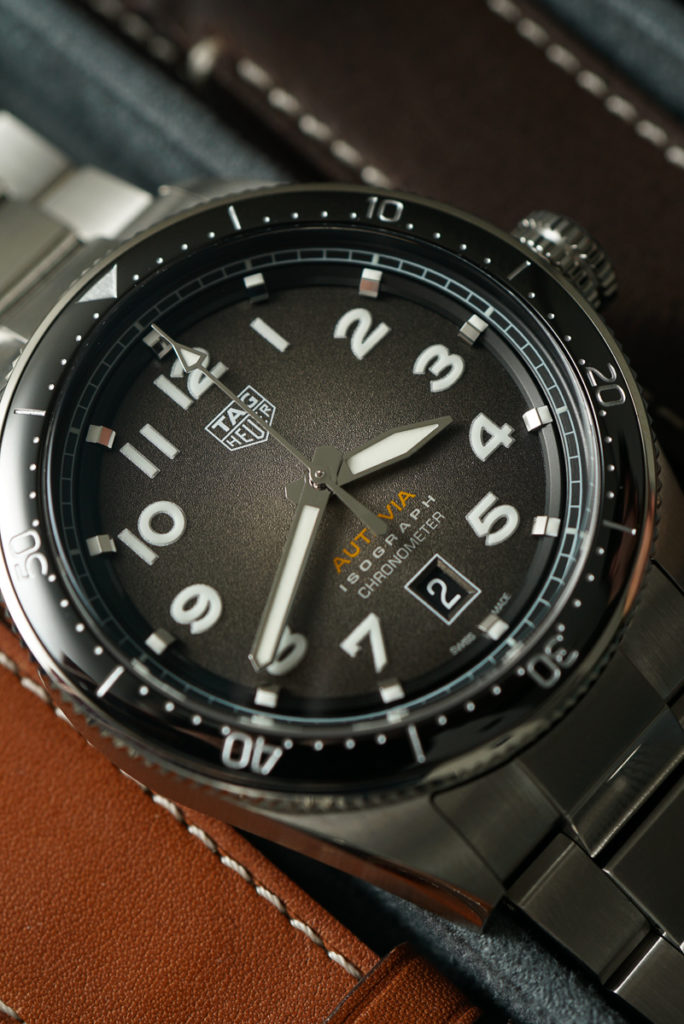 Equipped with a date aperture at 6:00, the Calibre 5 movements are all COSC-certified, which is a nice touch, making the Autavia the brand’s most affordable chronometer and one of the most economical points of entry into this level of chronometric performance in Swiss watchmaking. Par for COSC certification, the Cal. 5 should deliver -4 or +6 seconds per day accuracy throughout its 38-hour power reserve. And thanks to the special hairspring, Autavia wearers should expect a watch that delivers better long-term accuracy, as it should be highly resistant to temperature deviation or magnetic influence. And though we can’t see the new movement behind the solid caseback (which is embellished with a cool propeller emblem), ultimately, it’s great to see TAG Heuer use the technology inside the Autavia to deliver a better, more value-driven product, without influencing the price-point. 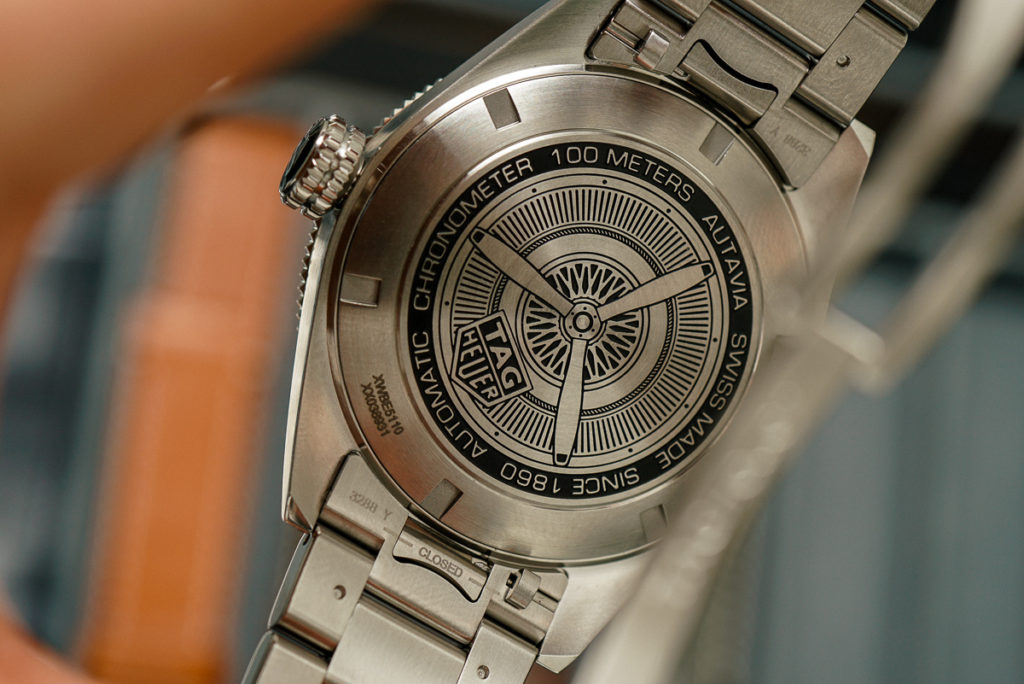 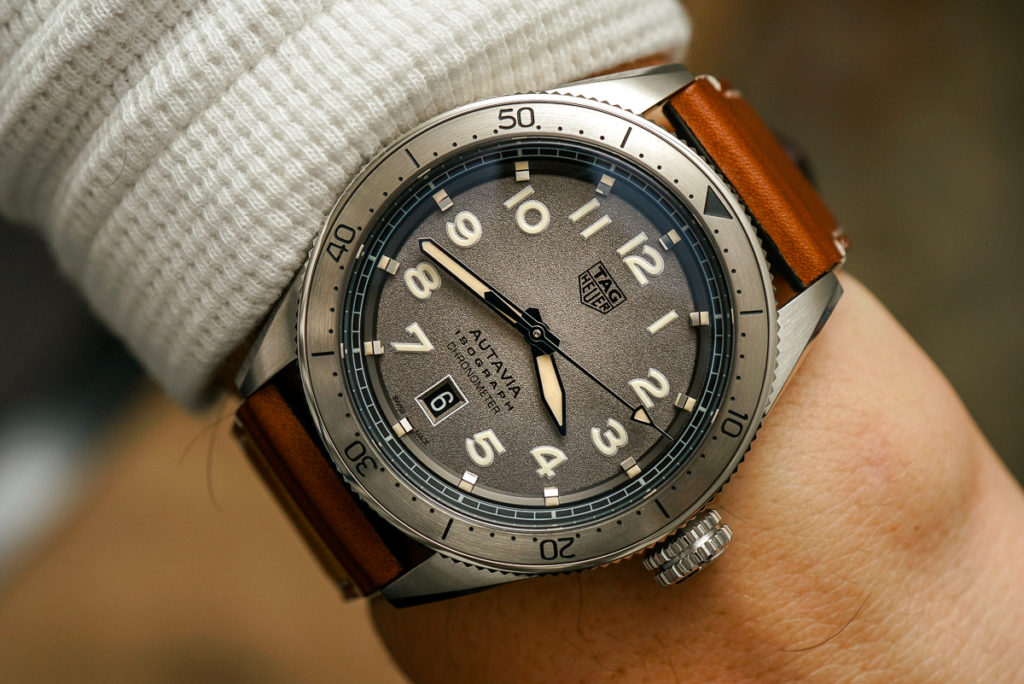 Speaking of price, the cheapest way into the Autavia is going to be via the tonal stainless steel bezel, but the watch really sings with a ceramic bezel insert, available on the black-, blue-, and green-dialed variants. And at 42mm with a relatively compact lug-to-lug, the 100m water resistant case wears quite nicely on a wide variety of wrists (including the 6.5-inch wrist photographed). It exhibits contrasting brushed and polished lug facets, and is sculpted in such a way that feels distinctly “TAG Heuer,” which should be familiar to anyone who’s handled a modern Carrera or Autavia chronograph. 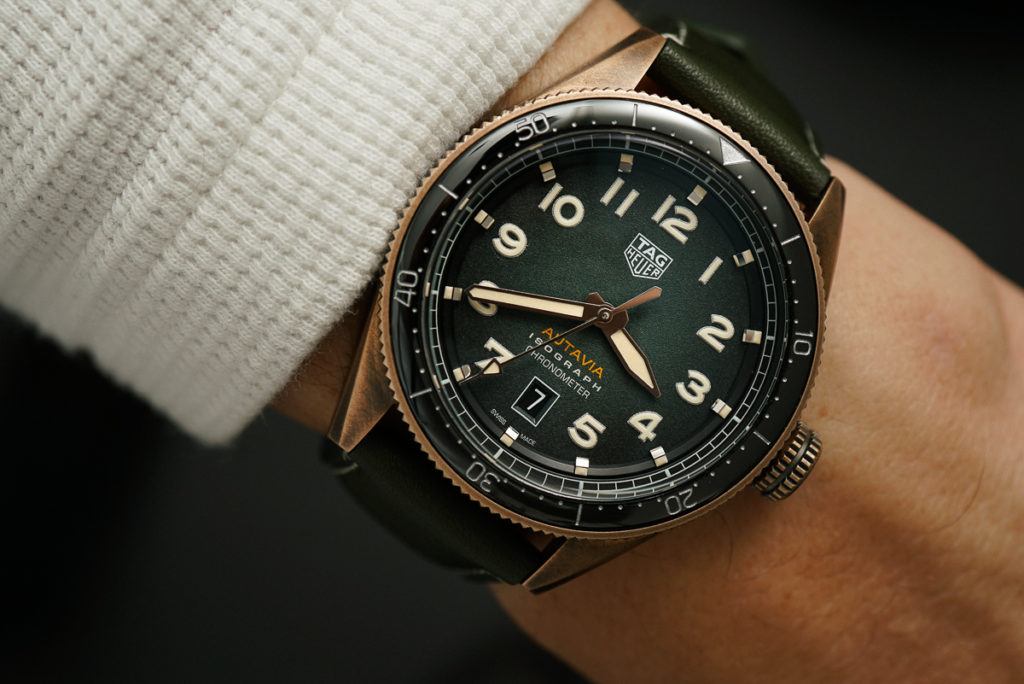 But where the watch really breaks away from its namesake is in the dial itself — which is finely textured in a matte, degradé finish that starts out light in the center and gets darker as it reaches the sloped rehaut. Inspired by the font used on an early Autavia reference, each of the Arabic numerals is actually a singular raised block of Superluminova, which creates a subtle three-dimensional effect when viewed at an angle. It’s particularly cool in low light, seeing the sides of the lume glow, and not just the top. Each of the five minute markers in the dial’s chapter ring are punctuated with an angular “notched” metal insert — elements that bring a little more depth and character to what would otherwise be a pretty static matte dial. 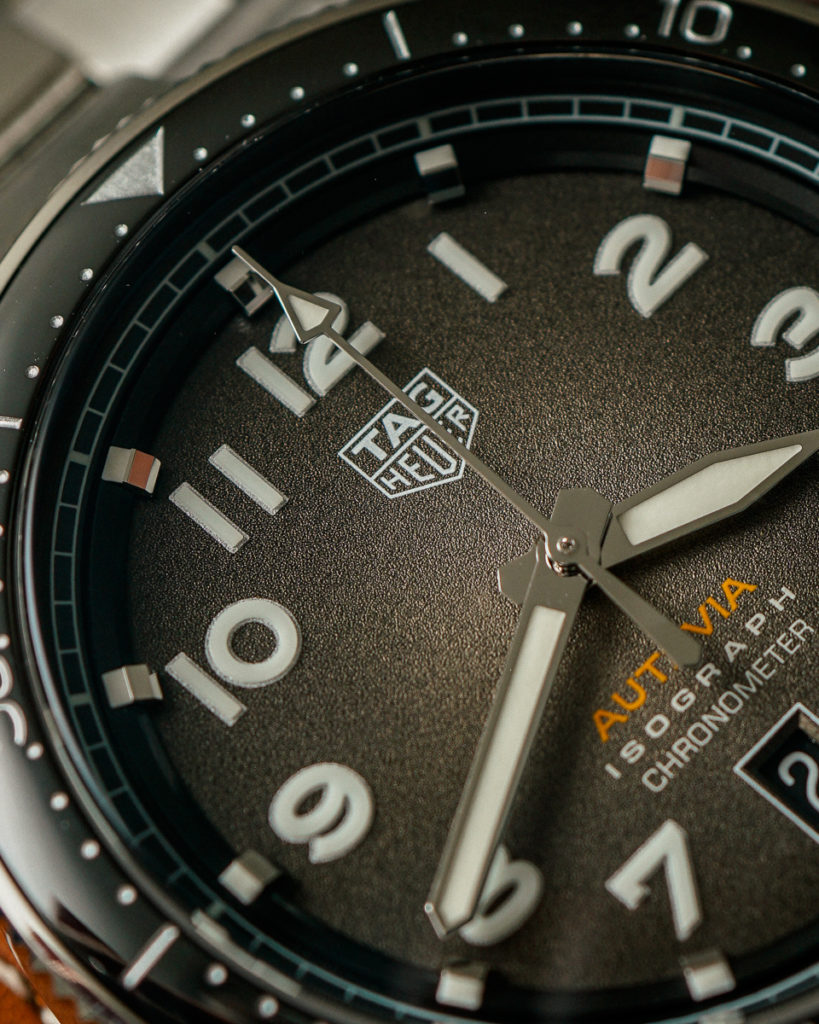 In addition to the different dial colors and case executions (I’ll say it right now – bronze and the smoky green is the one to own here), TAG Heuer has also made it easy for the layperson to swap out straps and the three-link bracelet as desired with a neat tool-less attachment system. And to complement this system, the Autavia is being launched with a full spectrum of different leather and nylon NATO straps, enabling the wearer to customize to their heart’s desire. Thankfully, the cases are drilled to accept standard spring bars as well, so you can use your own straps if you so desire. Combine these elements with a double AR-coated sapphire crystal, and you have the trappings of a watch that’s not just easy on the wrist, it’s extremely easy to photograph. I’d argue that TAG Heuer understands the importance a watch’s photogenic character on Instagram (just ask anyone who’s ever shared a photo for #speedyTuesday) and seems to be tailoring the Autavia accordingly for mass appeal. 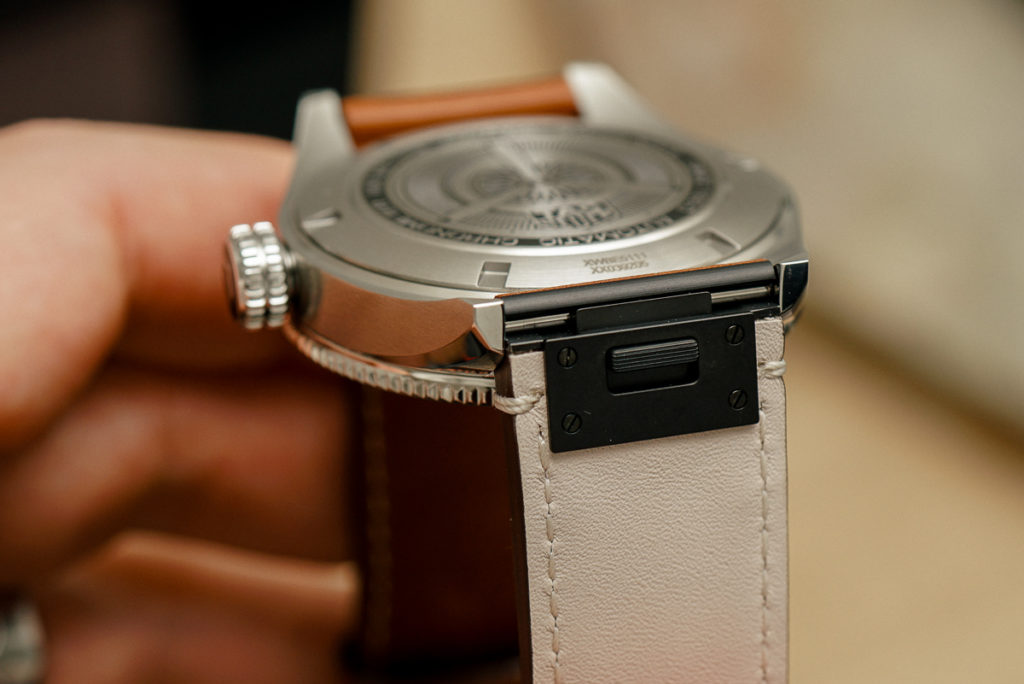 At first glance, the new Autavia is a pretty safe watch. Boring even. To some, indeed an Autavia in name only. But to others, it represents the future of the brand and a missing segment in TAG’s offerings from the last decade or so — something that mixed the capability of the Aquaracer with the easy, everyday wearability of the Link, while ratcheting back the bold, overly modern styling of both. Especially in bronze, it’s certain to endear itself to those looking for a sporty and classic Swiss-made automatic that doesn’t break the bank. The price of the TAG Heuer Autavia Isograph watch starts at $3,500 for the variant with the stainless steel bezel and leather strap and jumps up to $3,950 for the bracelet variants. Head over to tagheuer.com to learn more about the new Autavia collection. 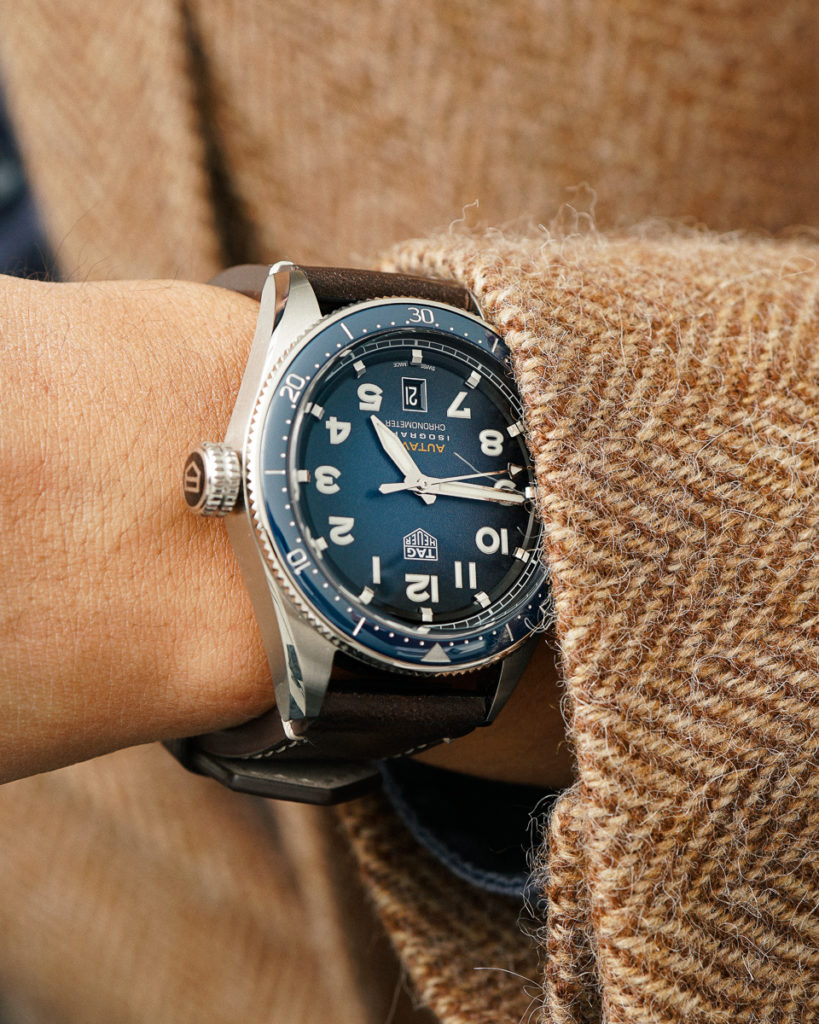