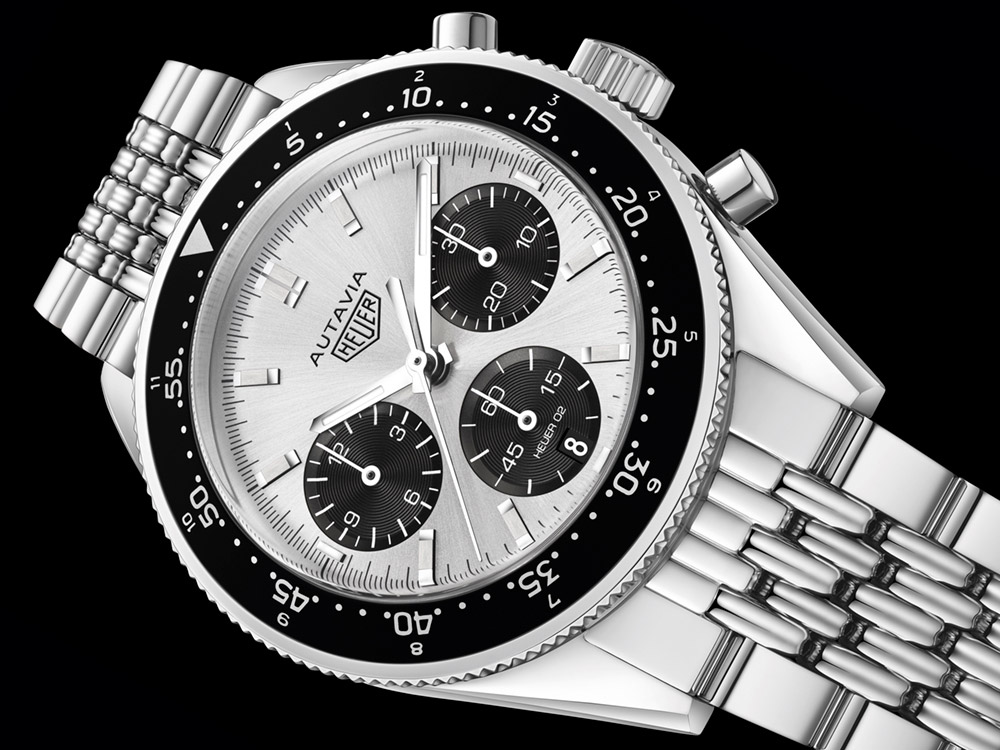 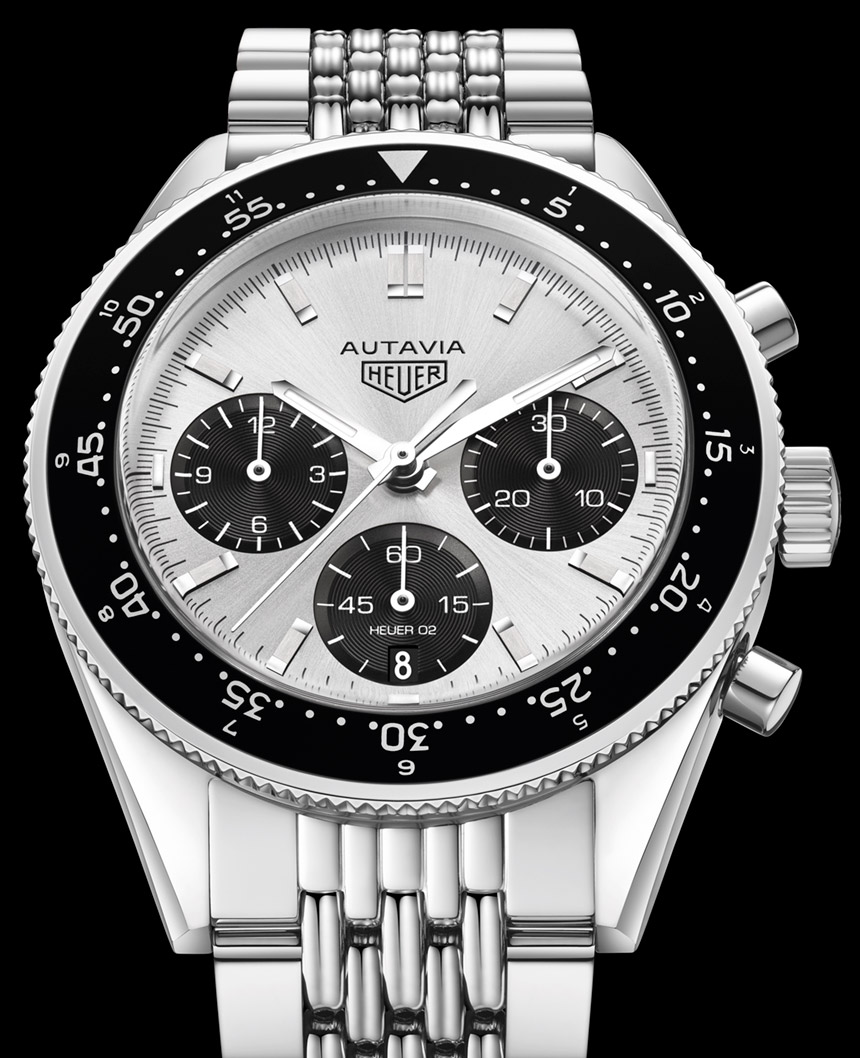 The TAG Heuer Autavia “reissue” that launched this year has been a hit, and today a limited edition variant of the timepiece comes out which is intended to celebrate the 85th birthday of Jack Heuer. Today’s TAG has been keen to promote the legacy value of Mr. Jack Heuer as much as possible, and for good reason. The charming former head of TAG Heuer is also part of the original Heuer family that started the brand. In the 1960s, he famously launched the very popular Carrera collection, as well as the first wrist watch version of the Autavia. 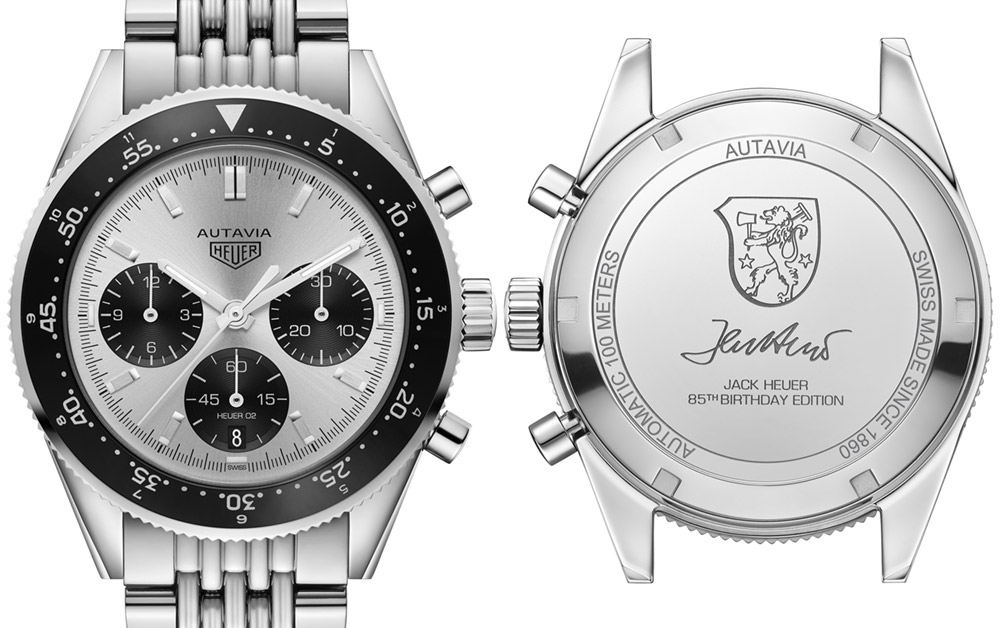 According to TAG Heuer, In 1933 (a year after Jack Heuer’s birth) the Heuer company penned the “Autavia” name which was a combination of the words “automotive” and “aviation.” The notion was to have a timepiece that was suited to both purposes. It wasn’t until about 30 years later in 1962 that the Autavia name was bestowed upon a wristwatch, which Jack Heuer claims was the first watch he designed while at the company. Jack also seems to suggest that this limited edition version of the modern Autavia Heuer 02 is the “last watch that I have created,” which may imply that he could be done with having timepieces associated with him. That could be so, but my instinct tells me that there are likely to be occasional Jack Heuer limited edition timepieces so long as there is a Jack Heuer around (and may he live well past 85 years old). 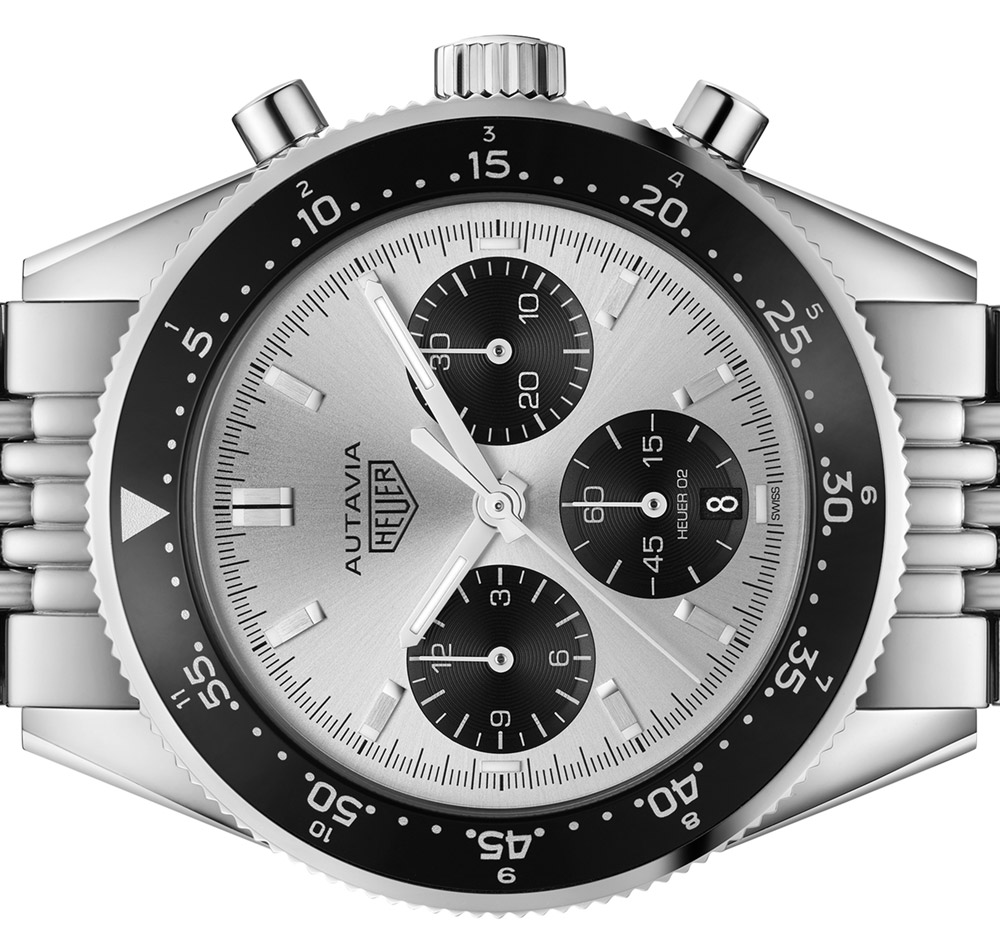 I recently reviewed the TAG Heuer Autavia Calibre Heuer 02 watch on aBlogtoWatch here. The limited edition Jack Heuer version is similar, but with a few key differences aside from the obvious dial colors, though these differences can be difficult to spot if you don’t know what you are looking for. Of course, unlike the non-limited edition reference CBE2110.FC8226 version of the Autavia Heuer 02, this reference CBE 2111.BA0687 Jack Heuer version of the Autavia is limited to 1,932 pieces (because of Jack’s birth year). The watch is due to be released on or around Jack’s 85th birthday which is on November 17th.

I recommend that anyone who is interested in this watch, and who may have missed my above linked-to review – reference it after reading this article. For the most part, everything I said about the non-limited edition applies to this limited edition model ranging from the caliber Heuer 02 in-house automatic chronograph movement, slick vintage looks, and good value for the money. 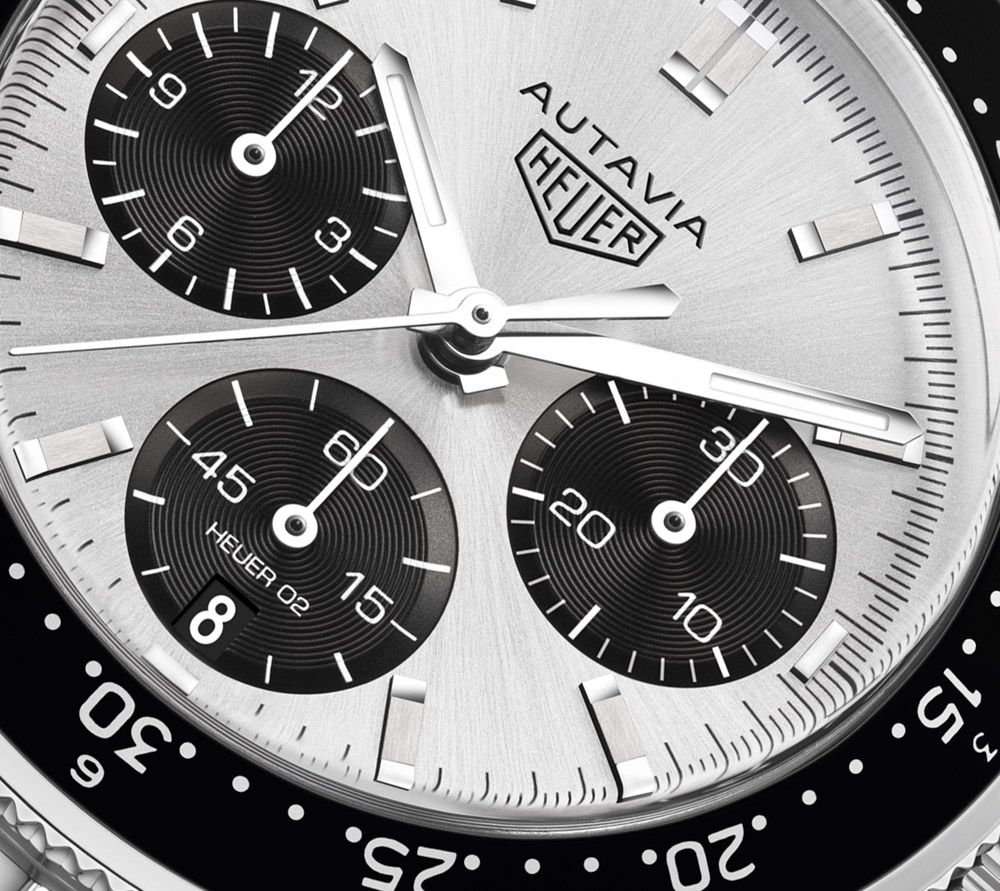 The major difference in the Jack Heuer Autavia versus the other model is the dial color – which, in this instance, is silver with black-colored sub-dials. While I only have the brand’s images of this watch handy for this article, I have handled and worn this watch a few times and can attest to its desirability. One thing I want to mention is that unlike how the images seem to portray the hands, the dial is for the most part just as legible as on the black-dialed Autavia, if my memory serves me correctly.

The silver-colored dial contrasts very nicely with the black sub-dials, making for a very authentic panda-dial look that I happen to find attractive. In my opinion, it actually edges out the non-limited edition Autavia as being the more attractive of the two – but in reality, they are both good-looking timepieces. 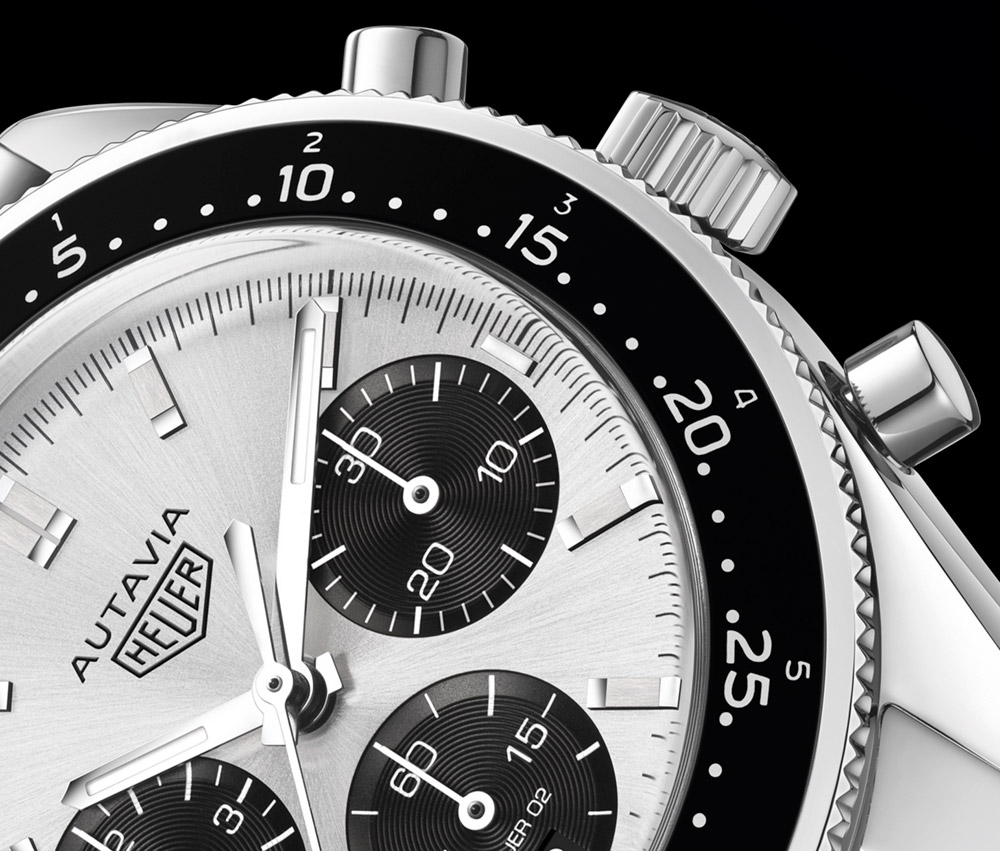 Another difference in the limited edition is the design of the numeral scale in the bi-directional rotating bezel. The non-limited edition Autavia has a 12 hour scale on the bezel, whereas the Jack Heuer model has a more traditional 60 minute counter. Both are on a black anodized aluminum bezel insert. Again, I’ll point out that what would make the Autavia a more perfect watch is a ceramic versus aluminum bezel insert (again, in my opinion). Which of the two bezels is more attractive or useful? That is a good question and really a matter of personal taste. With fewer markers, the 12-hour scale is a bit more on the elegant side. Though, the 60-minute counter is a bit more common, and arguably useful in more situations as a timing device, and also a bit busy with all the markers. I really can’t say that one bezel choice is better than the other – outside of saying that they are merely different. 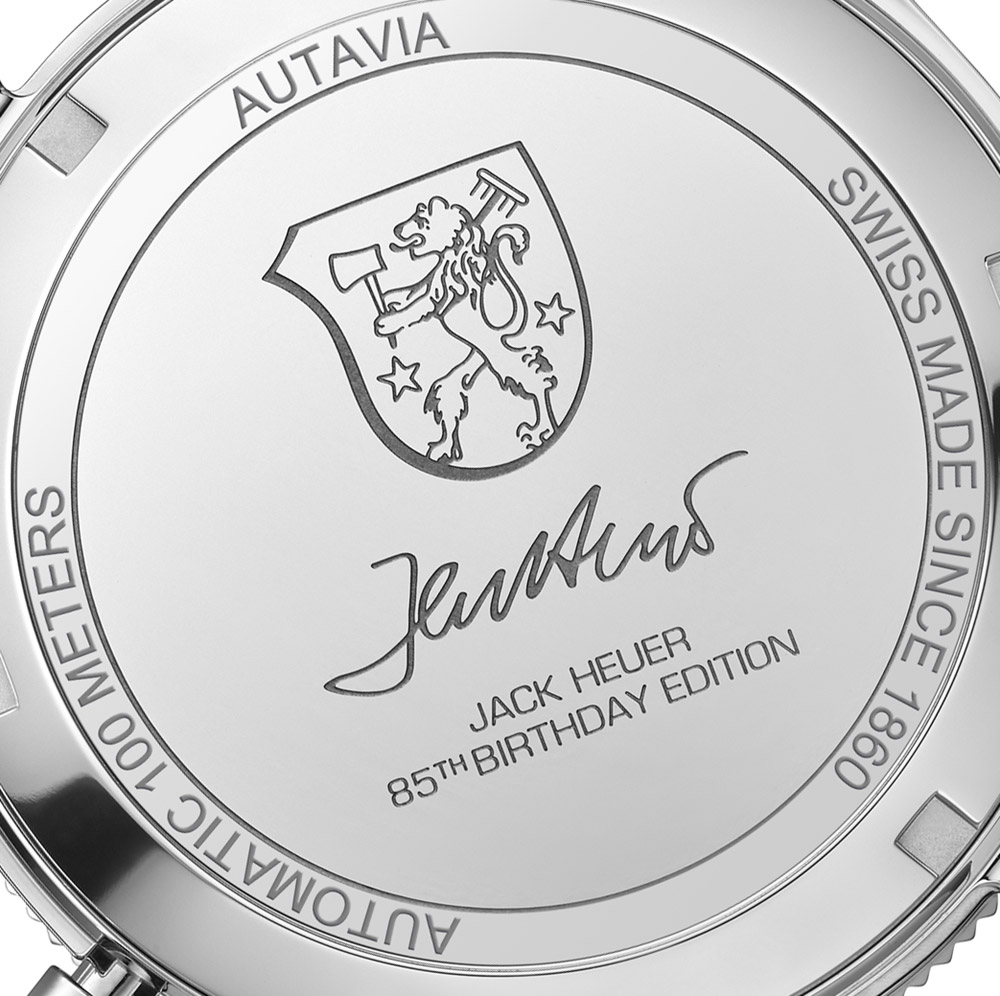 A somewhat strange design decision in the Autavia Heuer 02 Jack Heuer is the choice of caseback. The non-limited edition model had a sapphire crystal display caseback that offered a view of the excellent and nice-to-look-at TAG Heuer Caliber Heuer 02 automatic movement. The Jack Heuer model has a solid caseback, that is engraved with Jack’s family seal and signature. It also says “Jack Heuer 85th Birthday Edition,” as though you needed to attend his birthday party in order to get one. Or does it look as though you are wearing Jack Heuer’s personal watch? I’m not sure… I actually told TAG Heuer that if I get one of these, I’d like to get the caseback of the non-limited edition Autavia and screw it on the Jack Heuer edition – simply because I like looking at the movement so much. What should I do with the Jack heuer signature/seal caseback? Maybe turn it into some type of a pendant? 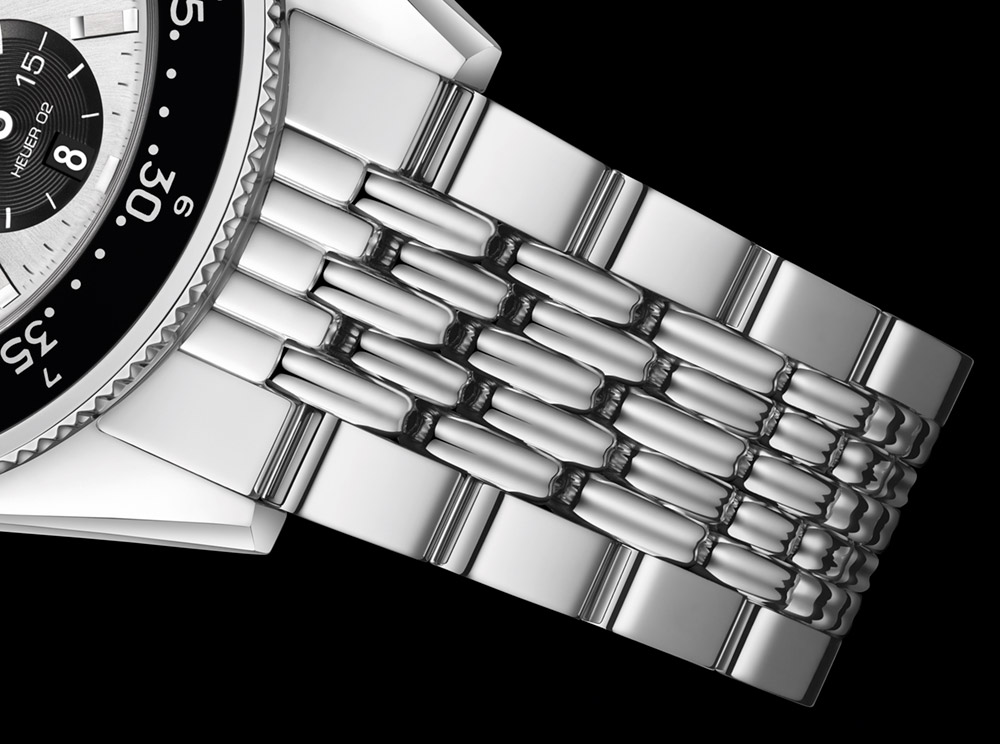 TAG Heuer offers the standard (non-limited) Autavia Heuer 02 on either a leather strap or a matching steel metal bracelet. The Autavia Jack Heuer comes exclusively on the metal bracelet option, which I don’t have any complaints about. Though, I have to say that I feel this watch would look rather handsome on a thick aviation-style black leather strap with silver-colored contrast stitching.

Other than the above mentioned differences, the Autavia Heuer 02 Jack Heuer watch is the same as the non-limited edition (again, that I discuss at length in the review article linked-to above). I’ll quickly remind you of the overall specs. The polished steel case is 42mm wide, a bit on the thicker side, and water resistant to 100m. The calibre Heuer 02 movement is an automatic with a column wheel and vertical clutch-based 12-hour chronograph system. The movement features a neatly integrated date window within the sub-dial located at 6 o’clock, and the 4Hz (28,800bph) movement has a long power reserve of 80 hours.

I’ve been an outspoken fan of the new TAG Heuer Autavia collection, and that includes this Jack Heuer limited edition. I think what makes the story of it that much more interesting is that it wasn’t imagined after the first Autavia “re-issue” from earlier this year, but that it was developed at the same time (and only debuted now). It’s a very handsome and practical high-end sport watch that you can wear on a daily basis. It has enough high-quality guts and provenance to satisfy watch nerds, but it also has a refined look which lends itself well to casual, daily wear for anyone. The reference CBE 2111.BA0687 TAG Heuer Autavia Jack Heuer is a limited edition of 1,932 pieces and costs $600 more than the non-limited model at a price of $5,900 USD. tagheuer.com