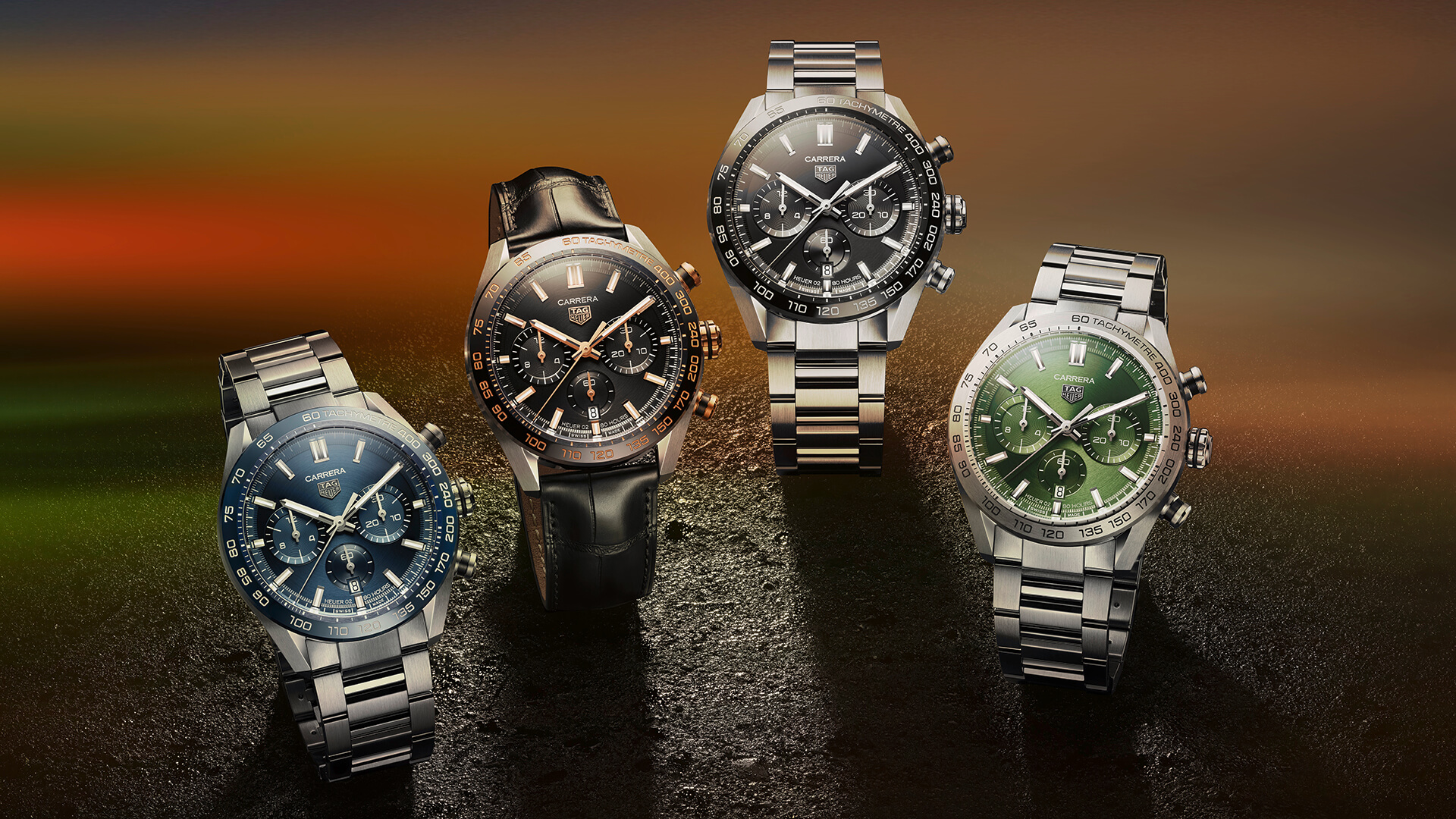 Over the past few years, the in house Heuer 02 automatic chronograph has become the de facto flagship movement for TAG Heuer, appearing in high-end variants of the Autavia, Monaco, and the aggressive, futuristic Carrera Calibre Heuer 02. Much of the brand’s release schedule for the first half of 2020 has been aimed at bringing this advanced powerplant to the classically styled half of the Carrera line, with a pair of limited edition Carrera models drawing on TAG Heuer’s classic ‘60s and ‘70s back catalogue for inspiration. Now the Swiss marque has taken this process several steps further, introducing four new vintage inflected Carrera models powered by the Heuer 02 to the regular production lineup. The TAG Heuer Carrera Sport Chronograph 44mm Calibre Heuer 02 Automatic series will likely form the backbone of the high-end Carrera lineup moving forward, handsomely combining old-school charm with a thoroughly modern size and powerplant. 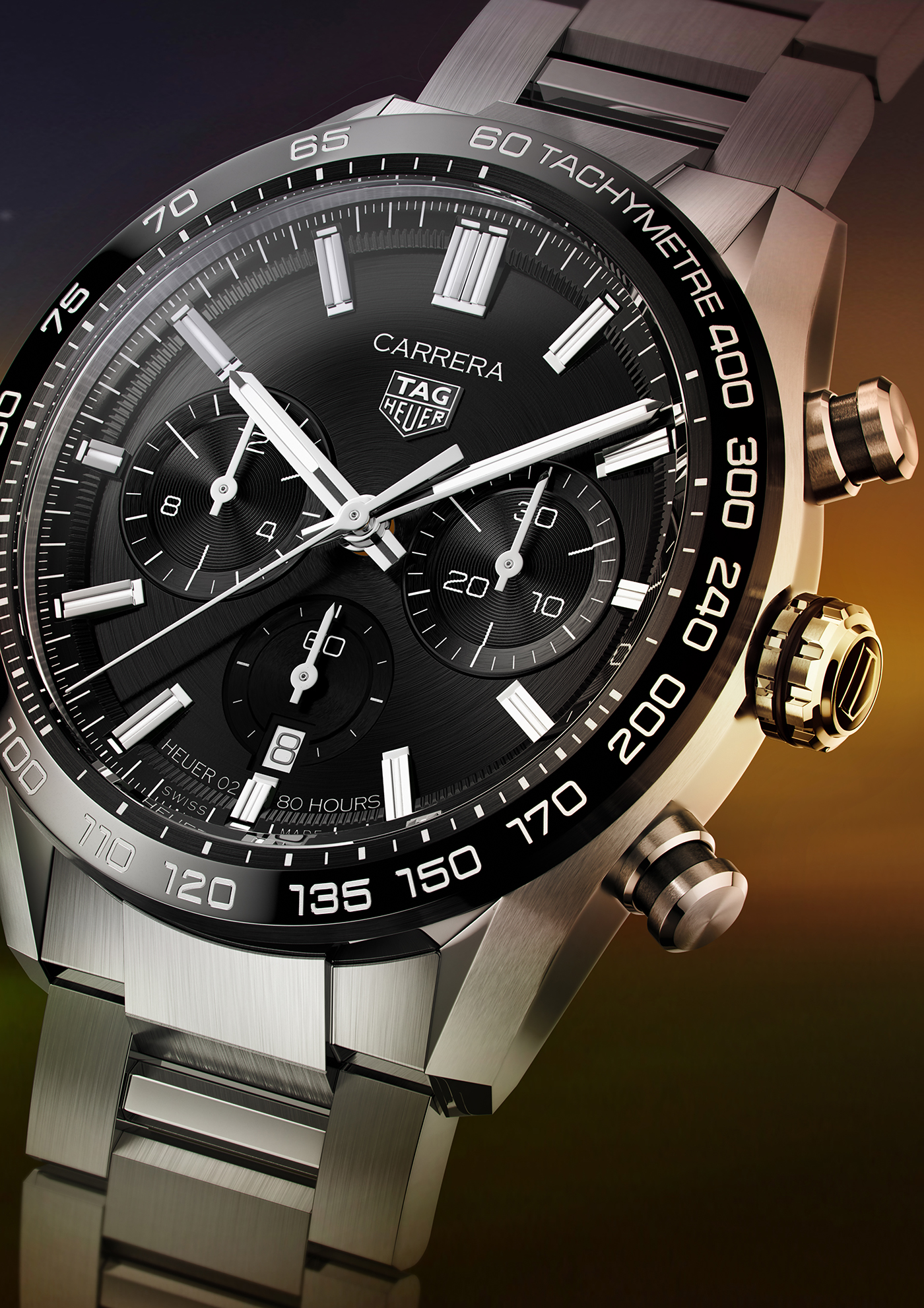 While the 44mm case design of these new models is instantly recognizable as a Carrera, the proportions have been altered throughout to reflect changing tastes. The trademark Carrera beveled lugs are shortened, featuring a more dramatic inward taper than previous iterations. The tachymeter bezels also receive a rework in ceramic, bringing these models in with the competition at this price range, although for the green dial model a more retro stainless steel treatment. In addition to the three core variants in stainless steel, a fourth two tone model is also available with an 18k rose gold crown and matching pushers. A sapphire display caseback finishes off the new design, while still allowing for a decent 100 meters of water resistance. While the slightly altered Carrera shape balances handsomely between vintage and modern cues, the sheer size of this case is something of a potential stumbling block. Even with shorter lugs, 44mm is undeniably beefy, which may turn off some potential buyers. It’s difficult not to imagine this design working far better at around 42mm or even 40mm. 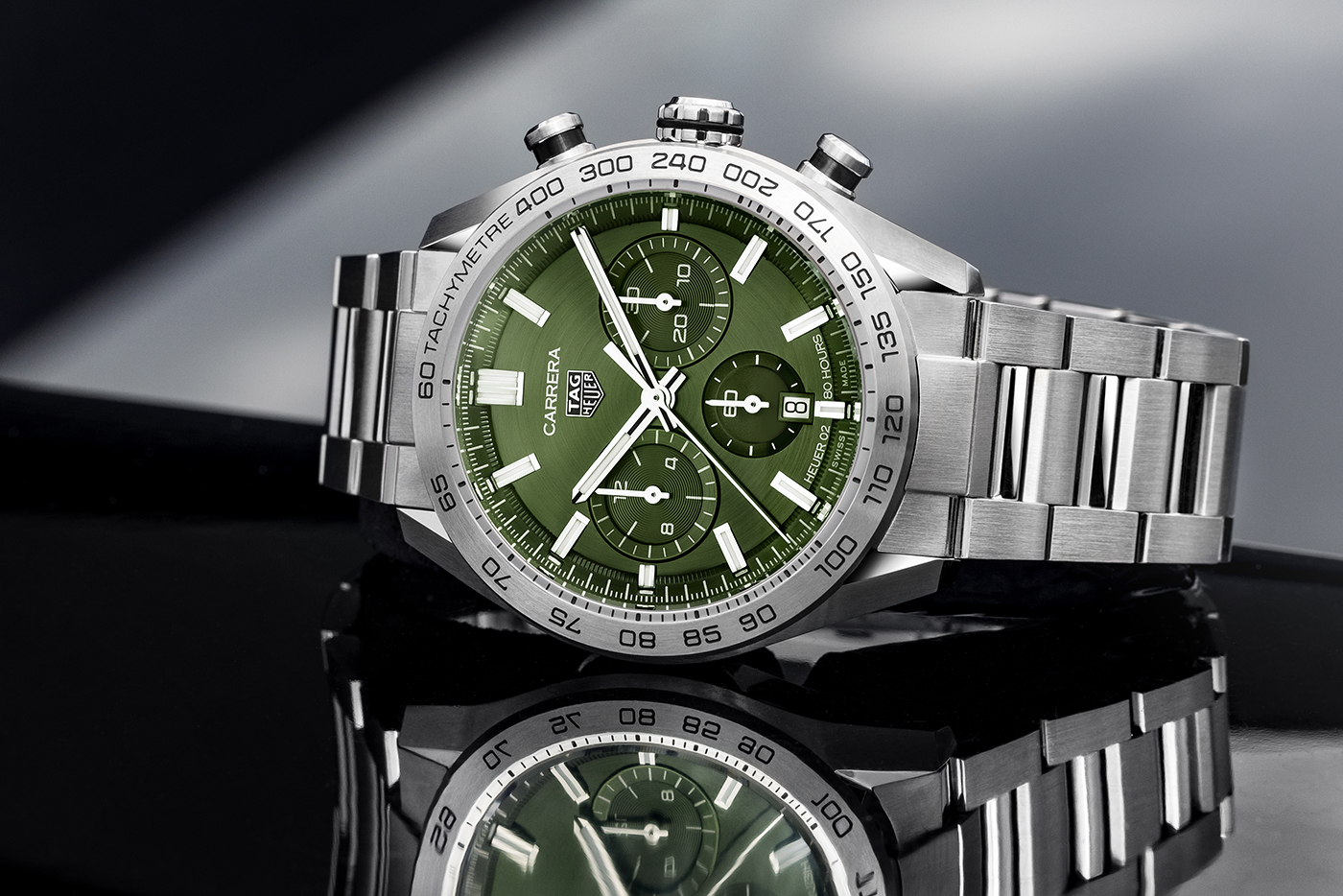 The base dial designs of the new TAG Heuer Carrera Sport Chronograph 44mm Calibre Heuer 02 Automatic models are timeless reinterpretations of the core Carrera layout, with large applied rectangular indices, faceted baton hands with a central contrast stripe in black, and snailed chronograph subdials sitting slightly below the main dial level. The sunburst finishes help to inject life into these traditional elements, providing a dynamic and coarsely brushed surface that adds a sense of rugged sportiness. The black sunburst is naturally the most conservative and versatile of the bunch, followed by a slightly desaturated medium blue, but the real winner of the collection is the verdant British racing green dial. While green dials are becoming more common in certain niches of watchmaking, the racing chronograph segment has yet to see many models in the color. It’s an immediately eye-catching tone, one that demands attention without being ostentatious, and immediately sets this new model apart from other entries in TAG Heuer’s catalog. 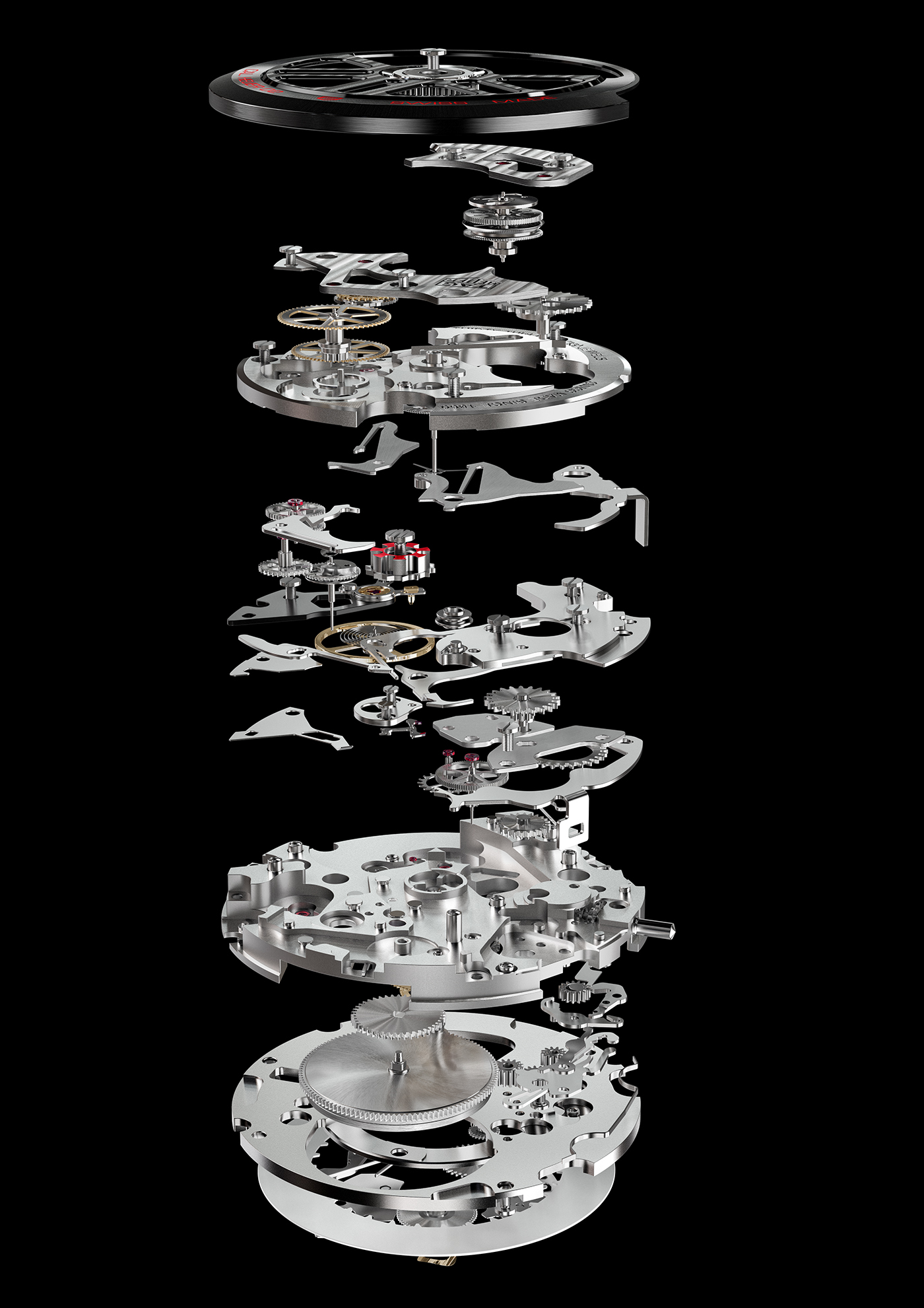 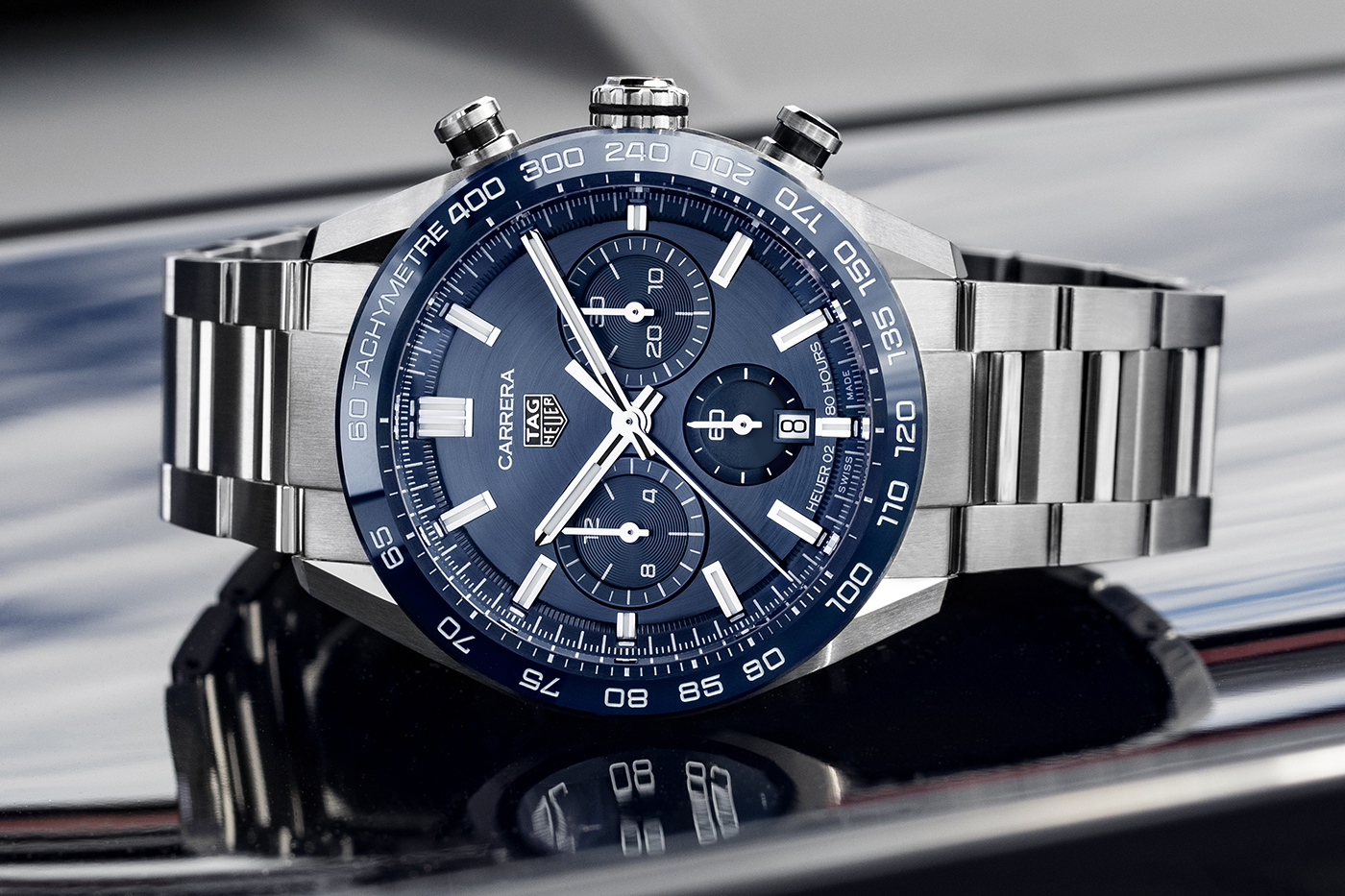 All three stainless steel models of the new Heuer 02 equipped Carrera are paired with an attractively sporty oyster style bracelet. While wider and thinner than previous iterations, this style still features TAG Heuer’s distinctive polished bevels on the center links for dynamic light play. For the two tone variant, TAG Heuer instead opts for clean black alligator leather with a signed deployant clasp, imbuing the watch with a more luxurious feel than its counterparts. 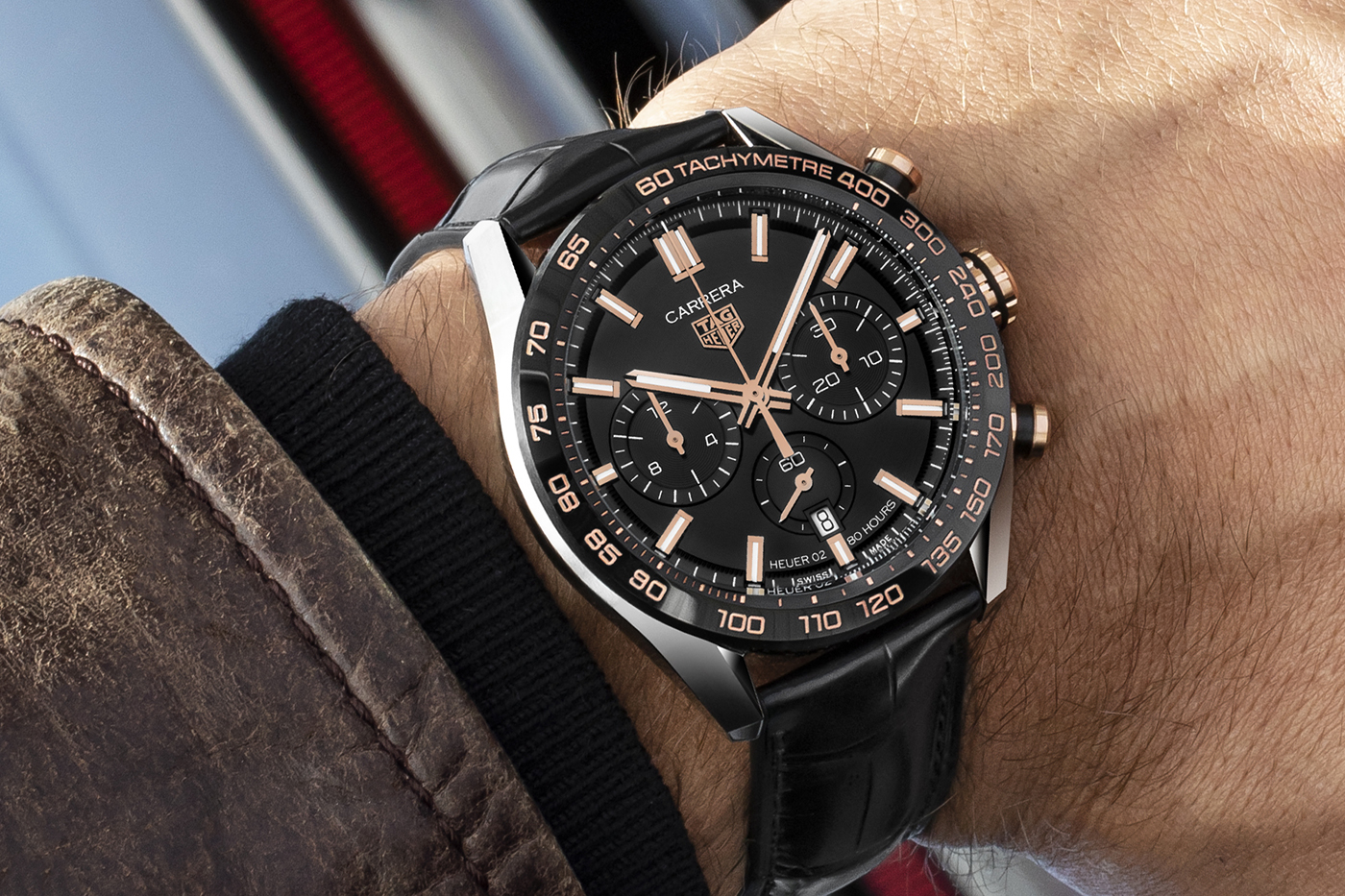