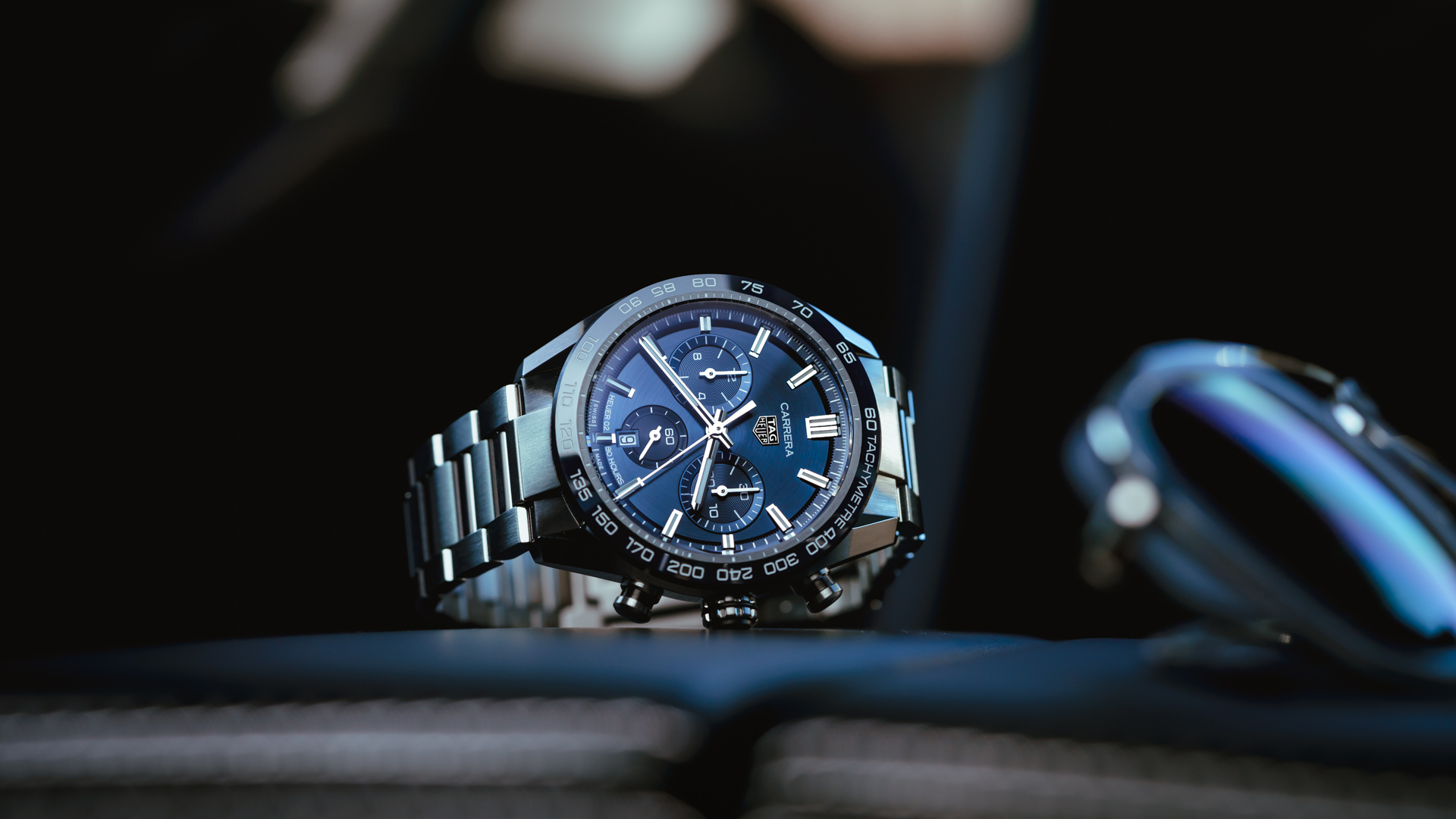 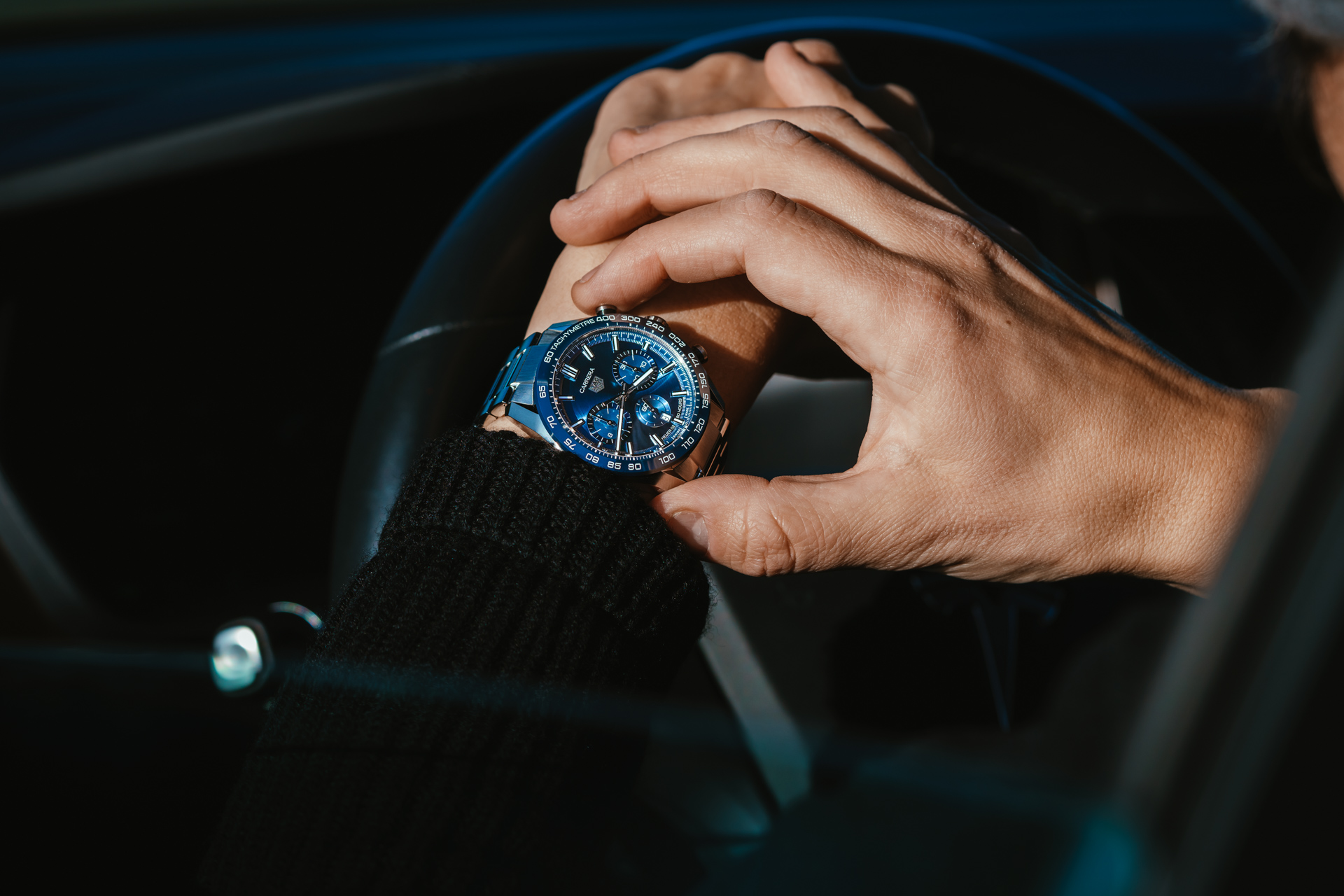 California’s westward-facing coastline stretches over 1,300 incredibly varied kilometers, ranging from smooth, sandy beaches in the south, to dramatic, wind-swept swathes of unforgiving territory in the far north where jagged walls of rock and teal ocean have been in rhythmic collision since the beginning of time. Three-quarters of the way up the coast from San Diego and a little over an hour’s drive from San Francisco’s iconic Golden Gate bridge sits one such terminus — the windiest known point on the West Coast, which lies at the southern end of a long, undulating farm road lined with rolling green pastures. To the north, a tunnel of cypress trees punctuate the horizon, their outstretched branches disfigured by the wind’s unending might.

Somewhere between and shielded from such winds behind the massive glass canopy of a Tesla Model X, I am racing towards the edge of the earth, TAG Heuer Carrera Sport Chronograph on the wrist. It’s my favorite juxtaposition of old and new — of stubborn landscapes and disruptors of the natural order, and for a watch that seems to finally be hitting its stride, just felt right. The Carrera is a storied name in timekeeping that, for the better part of the last decade, has been poised for greatness but feels as though it had yet to find its moment in a singular cohesive design — perhaps until now. 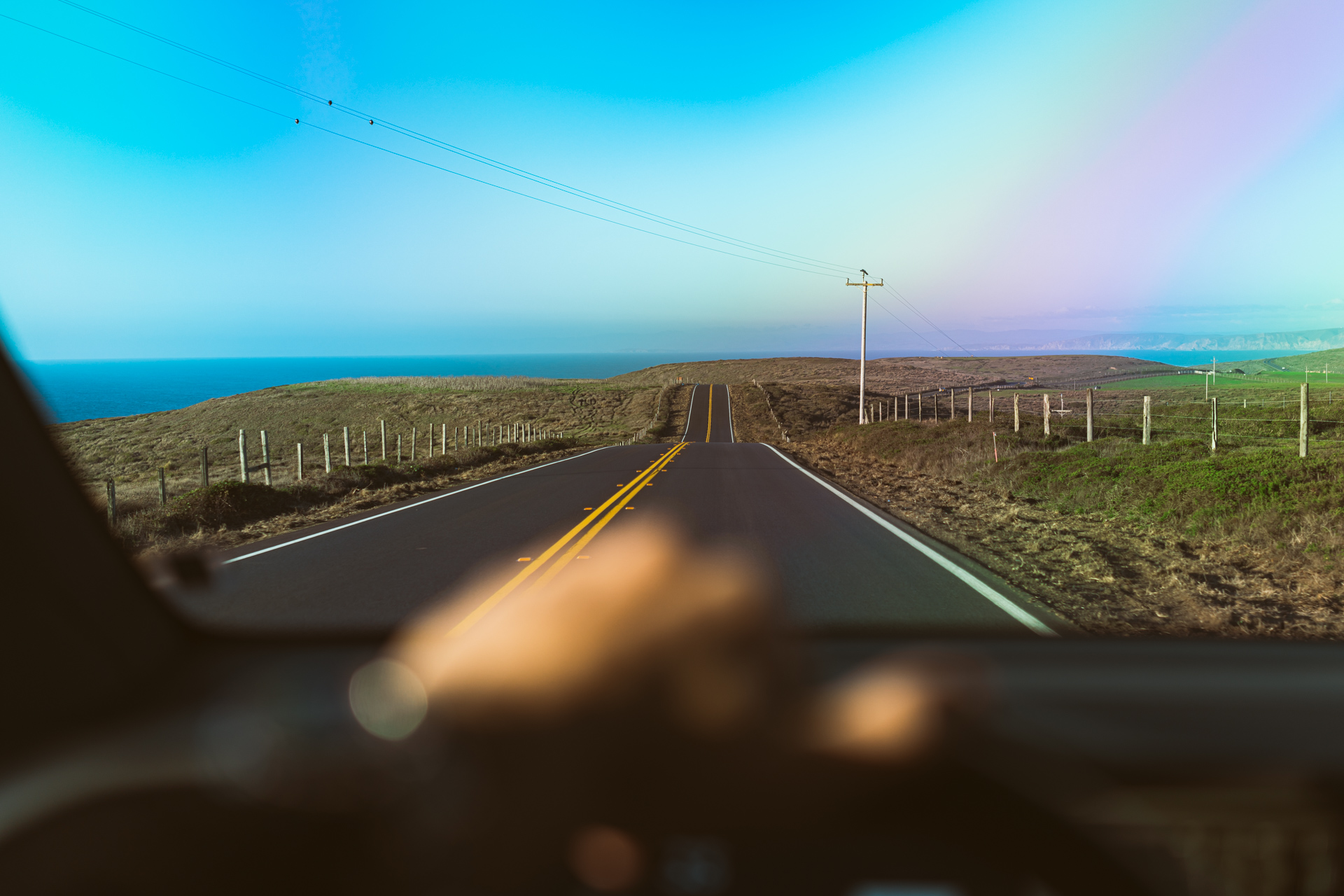 The TAG Heuer of 2020 and beyond has not come about by accident. If the brand feels more calculated in its approach, and far more comfortable in its own skin, that’s because it should. The stylistic vision behind this generation’s more surgical redesign is Guy Bove, TAG Heuer’s Creative Director. The name ought to sound familiar to industry insiders who’ll remember a successful career arc in design for IWC and Chopard, then as the visual architect for Breitling’s triumphant postmodern exodus from the Schneider era. In addition to his work on the modern Autavia re-launch, Bove’s singular focus with the Carrera refresh has been to bring the line back to the purity of its 1960s editions while retaining the sportiness and attention to detail that has defined its most modern references.

A photographer himself, Bove admits to designing his watches around how their surfaces interact with light, ensuring that the final product is as much a joy to behold on the wrist as it is to photograph, and the Carrera Sport is a testament to this. Increased in size from 43mm to 44mm, this newest Carrera generation retains the chiseled exterior of its many predecessors, though Bove ensured that its overall wearability was improved through the use of a thinner case footprint and shorter lugs. Make no mistake — it’s as strong an identity as the Carrera’s ever had, but one that leaves a far more refined, and markedly more mature, impression — a photogenic, fully realized specimen after many years of iterative executions. 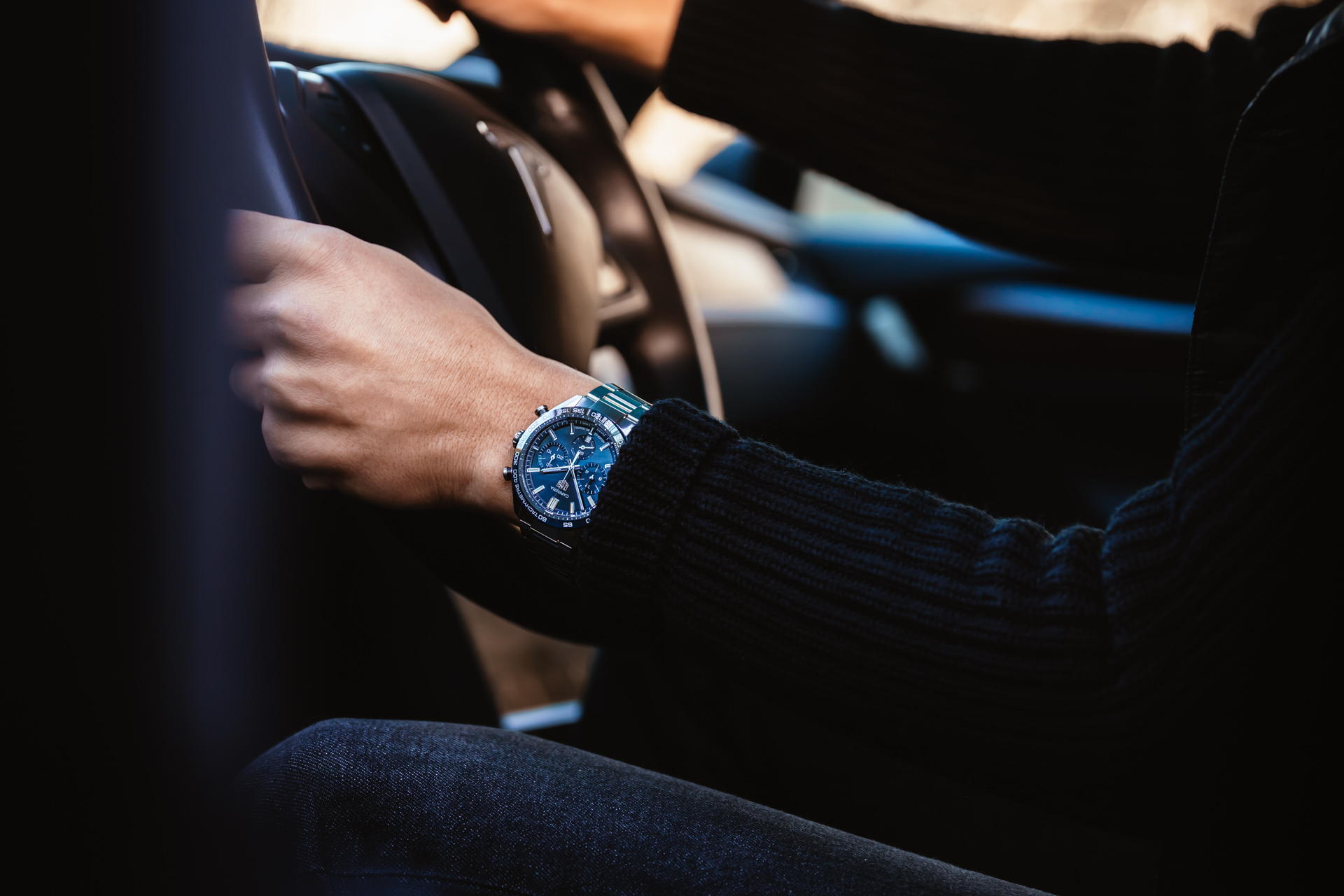 As the history books have been written, English sea captain Sir Francis Drake is credited with making Europe’s first contact with the California coast in June of 1579 when he landed his ship Golden Hind on what is now known as Drake’s Bay during the explorer’s pioneering circumnavigation of the globe. Guarding the western edge of Drake’s Bay is the Point Reyes Lighthouse, a blip now displayed on the Tesla’s oversized touchscreen. Built in 1870 atop a rocky outcropping overlooking the Pacific, the lighthouse has spent the better part of the last century steering ships through the perennial fog and away from the peninsula’s treacherous northern point, ensuring safe passage through to the waters of San Francisco Bay. The maritime history here is as palpable as the very color of the sea – varying tones of turquoise and indigo so rich, they can be felt in your bones. 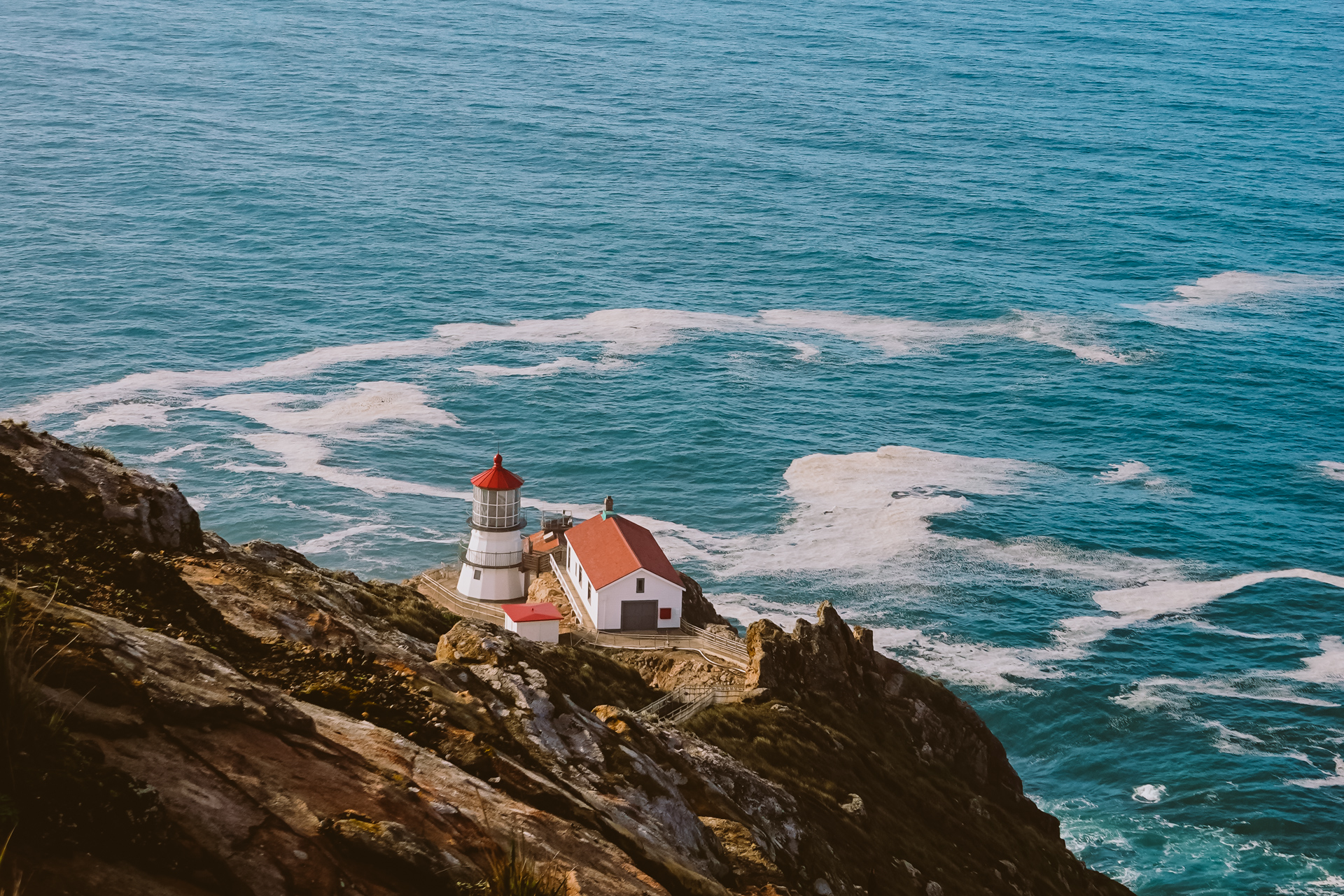 The rich blue visage of this Carrera carries that same tangible weight of color — stretched from the perimeter of its full ceramic tachymeter bezel outer, across the very cool matte textured chapter ring bezel to the cheerful sunburst center, every layer bearing its own finish to create a symphony of blue tones that jump alive on the wrist. Furthermore, nearly every surface on the watch’s dial has either a specific texture, an indentation, a bevel, or a snailed recess, creating a visually dynamic and staggeringly detailed execution that’s rarely seen at this price point. Perhaps most importantly, though, the visual updates have done little to diminish the Carrera’s legibility and sporty character as a modern driving watch. 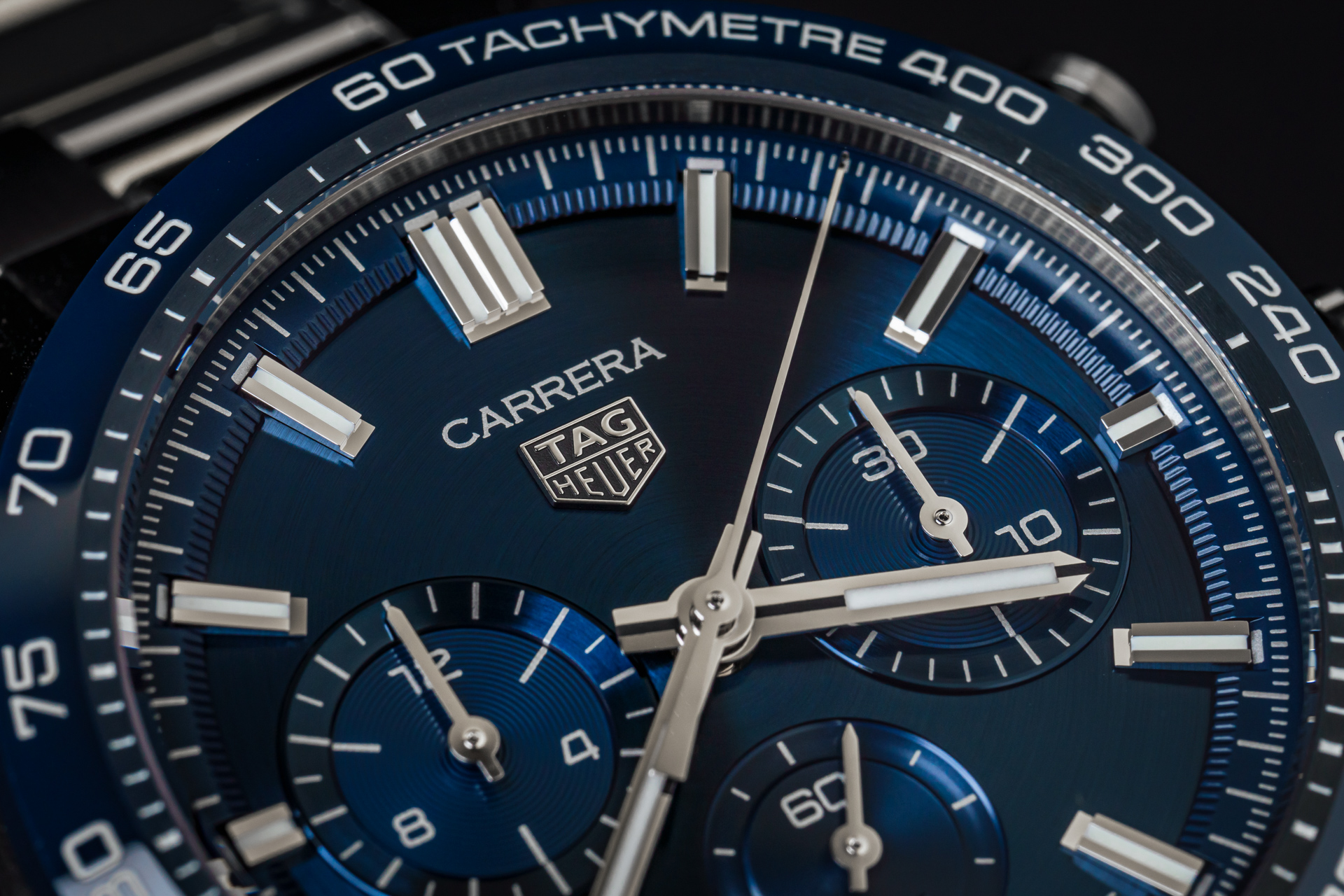 In a strange way, the Carrera Sport feels a little bit like the Tesla. It’s a quantum leap forward, no doubt, but it got here by going back to the basics — timekeeping and locomotion, each openly acknowledging the analog past while warmly embracing a technological future. Past iterations of the Carrera tried to do this but used skeletonized dials, dramatic forged carbon cases, and cutting-edge Nanograph technology of TAG Heuer’s own engineering — all great innovations in their respective rights but bombastic in their approach, and arguably quite niche in the scope of their appeal. 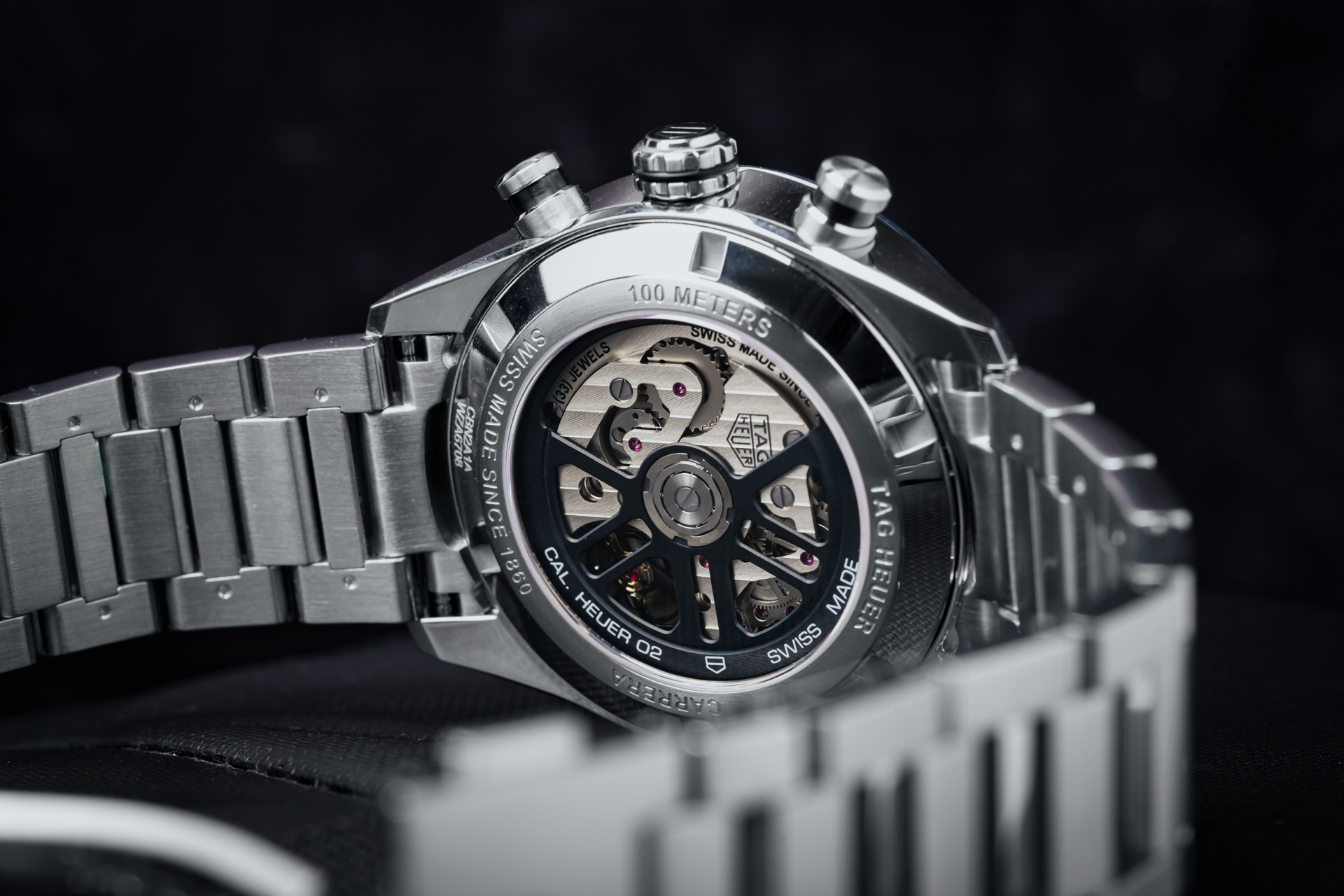 Much of this explicit modernity was a result of former CEO Jean-Claude Biver’s leadership in the last decade, which sought to re-establish TAG Heuer’s place in avant-garde watchmaking through novel design and technologies. The strategy didn’t not work, but the bombastic approach to marketing was a clear departure from the earliest days of Jack Heuer’s innovations that fused a classic, yet sporty mid-century aesthetic with leading technologies around water resistance and chronograph design. Heuer’s early brilliance was a modernity that  was by contrast, implicit, and it’s this spirit that appears to be the driving focus of the new Carrera Sport. Heuer fans may now exhale. 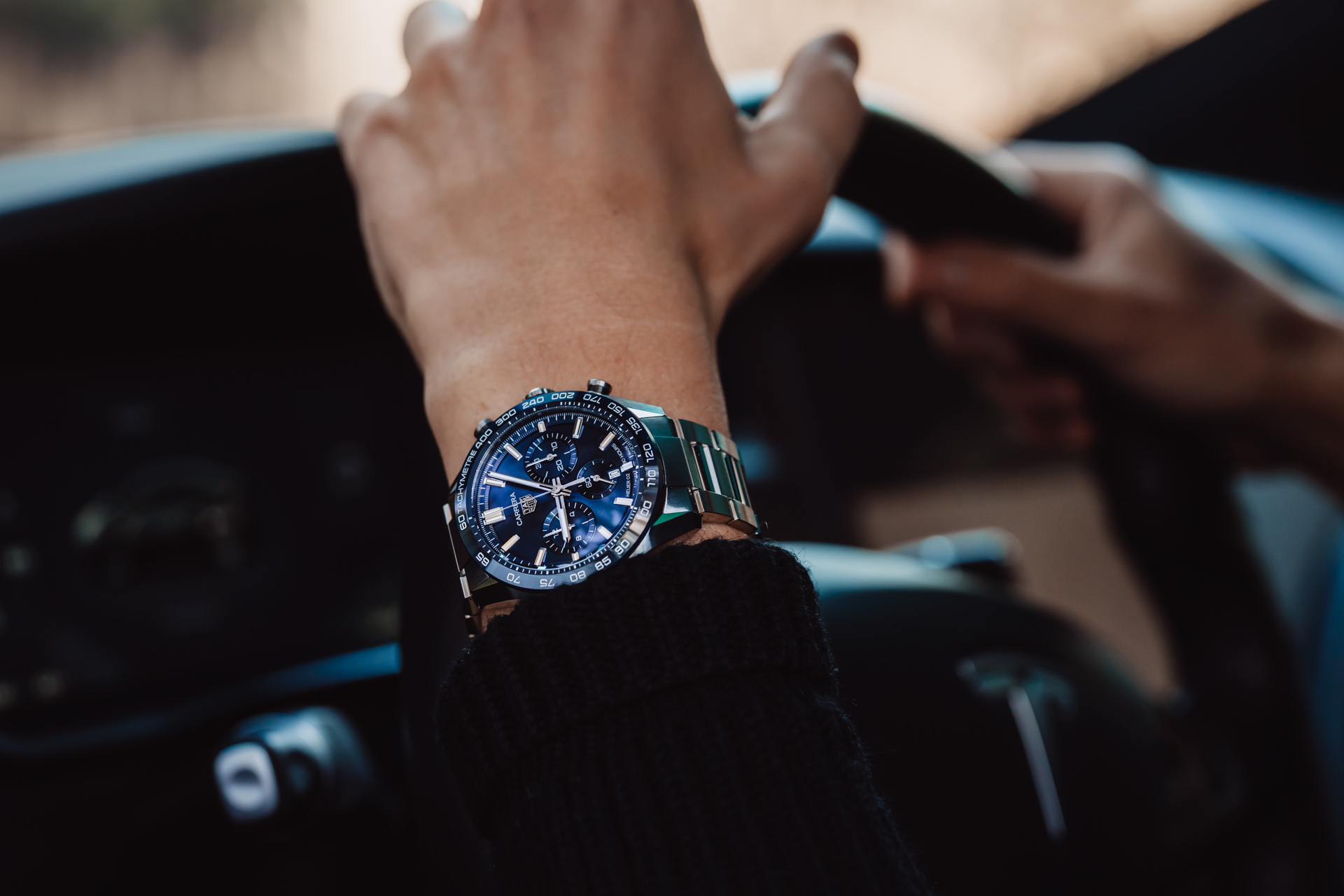 When the Carrera Sport was launched in 2020, the primary onus of its redesign was around the brand’s newest in-house manufactured engine: TAG Heuer’s own Calibre 02, introduced in 2018. Delivering an impressive 80 hours of power reserve, this column wheel-actuated chronograph movement represents the future of all TAG Heuer chronograph watches (from the Carrera to the new Autavia and legendary Monaco), and we’ve already seen it rolled out in both vintage-inspired Carreras, as well as the Carrera’s elegant 42mm companion line. What’s clear about all three different types of executions is that the movement affords a high degree of latitude when it comes to layout design — be it for vintage re-issue, or modern execution. The Cal. 02 Carrera Sport keeps things relatively traditional, with 30-minute and 12-hour totalizers (at 3 and 9 o’clock, respectively) on lap timekeeping duty. The date aperture has also been moved to a more visually appealing position at 6 o’clock, where it’s nestled inside the running seconds counter. Everything is where it should be — cleanly defined, readily legible, and supremely classic. 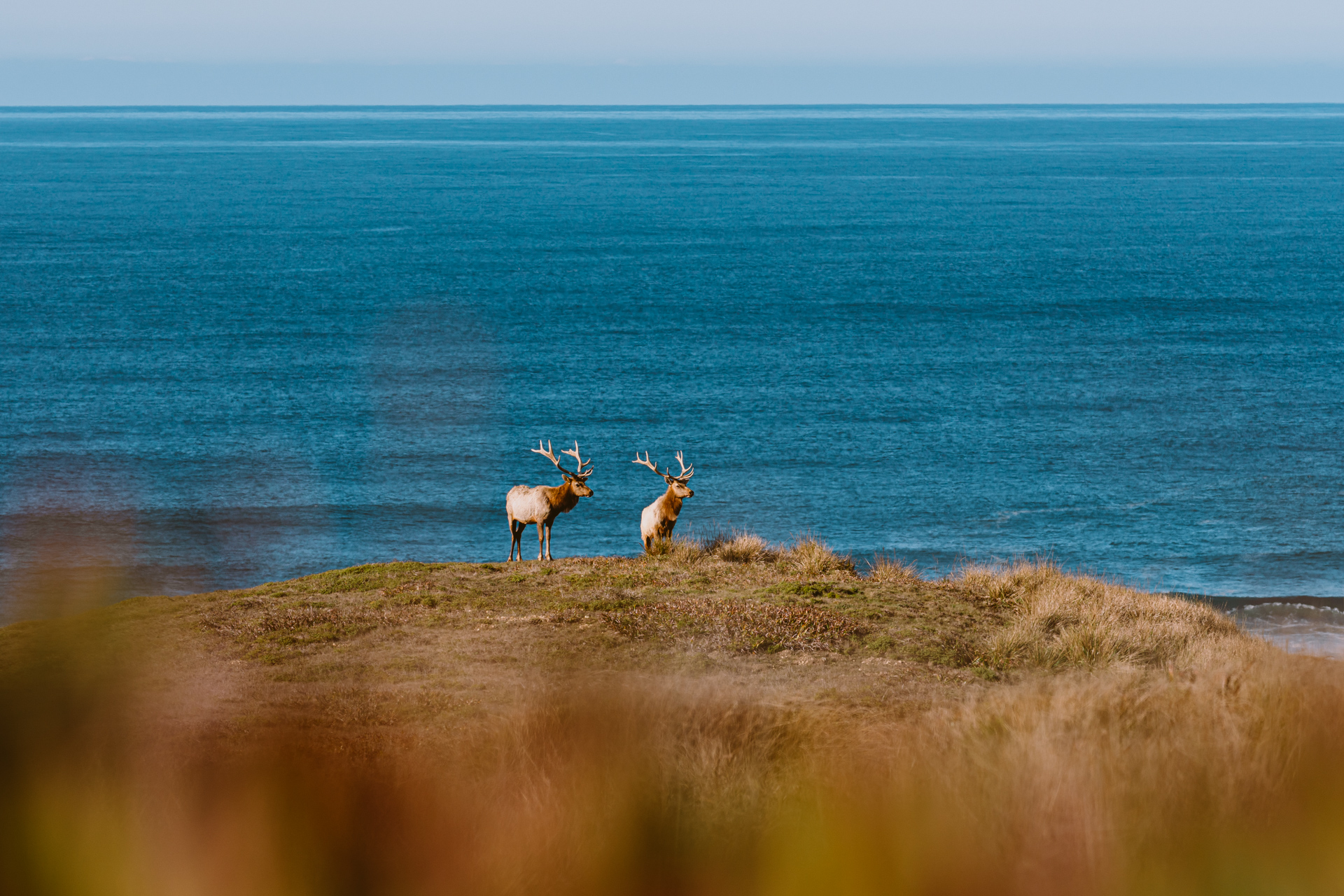 A pair of Tule elk watch as the Model X slows to a whisper-silent stop, its falcon doors opening with a smooth, hydraulic whoosh. Found only in the state of California, and once hunted to near-extinction, herds of these magnificent animals now dot the hillsides, roaming freely over the Point Reyes National Seashore. Each sighting is a poignant reminder that our planet’s future rests on our ability to create and maintain a coexistence with wild places such as these. I snap a few photos of the elk before sliding back into the driver’s seat. Returning to the road, I press hard on the accelerator and the Model X leaps forward with the clinical precision of a slot car. The absence of auditory, or even gravitational, feedback is both eerie and thrilling at the same time. It’s supposed to be an SUV, but the physics-defying Model X does naught-to-sixty in 2.5 seconds and carries a maximum speed of 155 miles per hour. And just like the Carrera on my wrist, it’s finally starting to feel like the future we’ve all been waiting for.

Pricing for the 44mm TAG Heuer Carrera starts at $5,750 on the stainless steel bracelet. Learn more about the new Carrera collection at tagheuer.com. 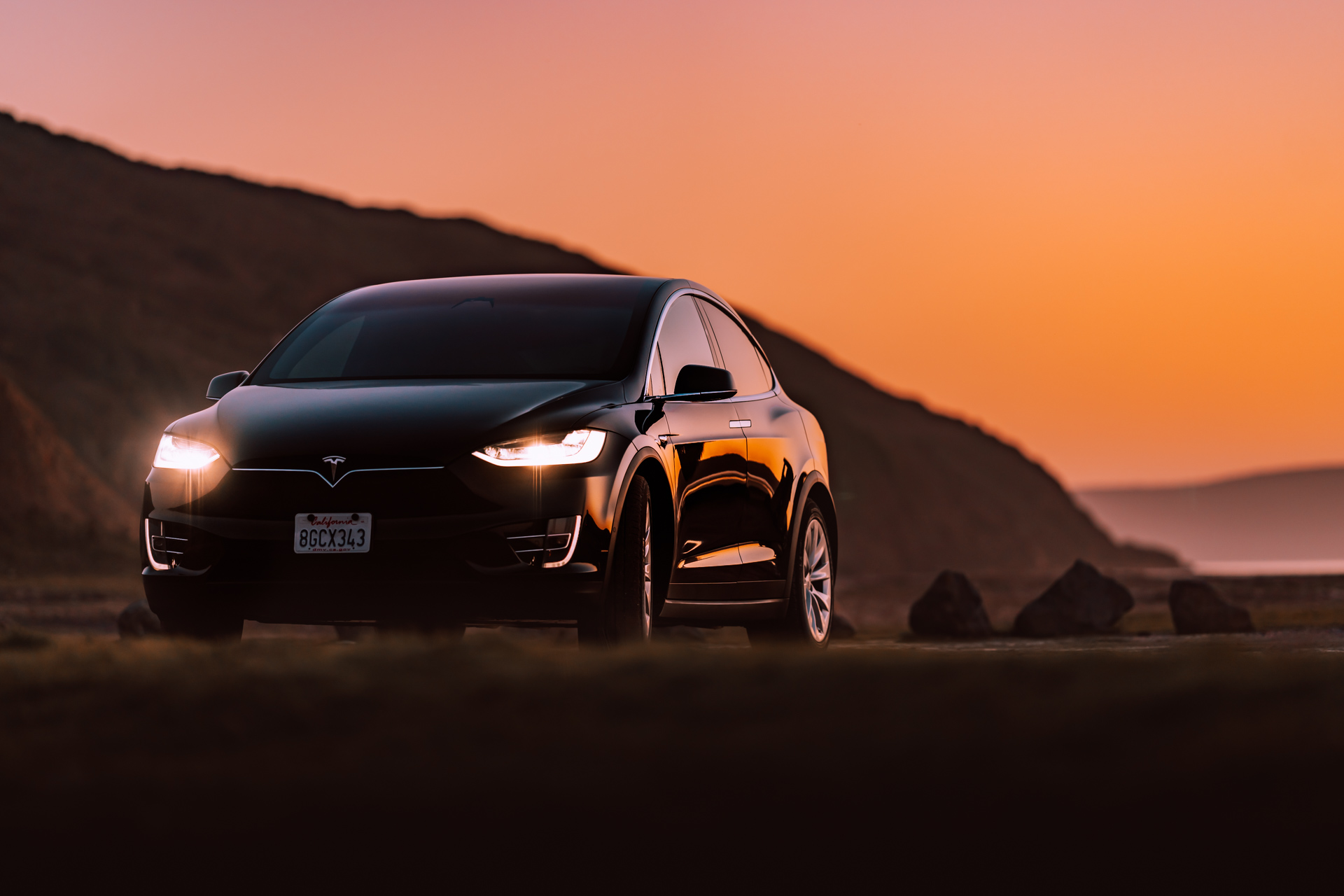