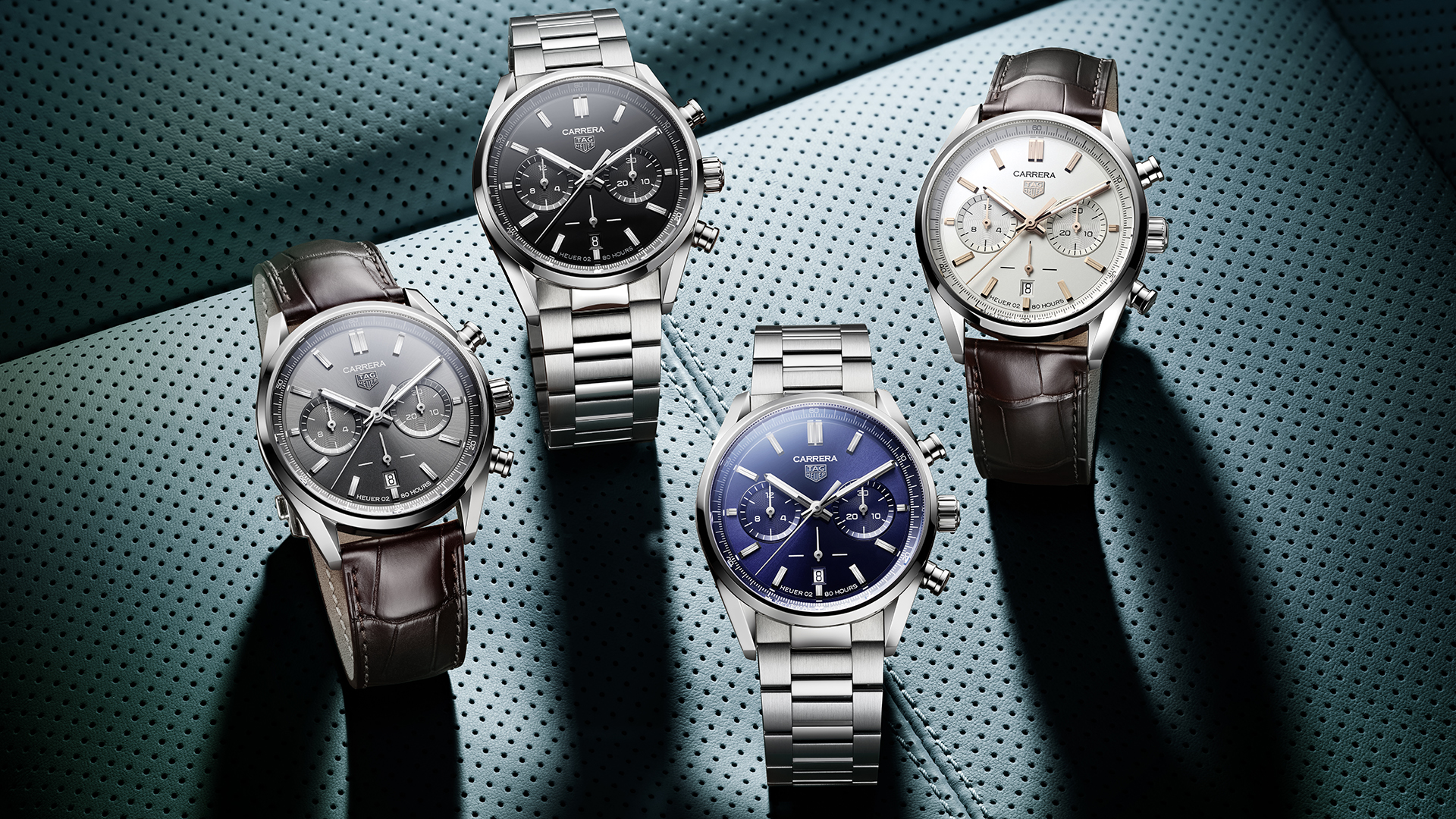 2020 has been an eventful year so far for TAG Heuer. As the brand celebrates its 160th anniversary, it has launched novelties across nearly its entire collection, with diverse new models appearing for the Formula 1, Aquaracer, Autavia, Monaco, and Connected lines, but perhaps the most important release of the year so far is the introduction of the in-house Heuer 02 chronograph movement to the Carrera series. While the Heuer 02 first made its way into the regular production Carrera lineup back in July 2020, the initial release was limited to the athletic 44mm Carrera Sport Chronograph series. Now TAG Heuer has returned to the Carrera line, updating the dressier, more refined side of the series with this same in-house powerplant. The simply named TAG Heuer Carrera Chronograph line combines this new movement with a slimmer, more elegant profile inspired by the original 1963 Carrera models. 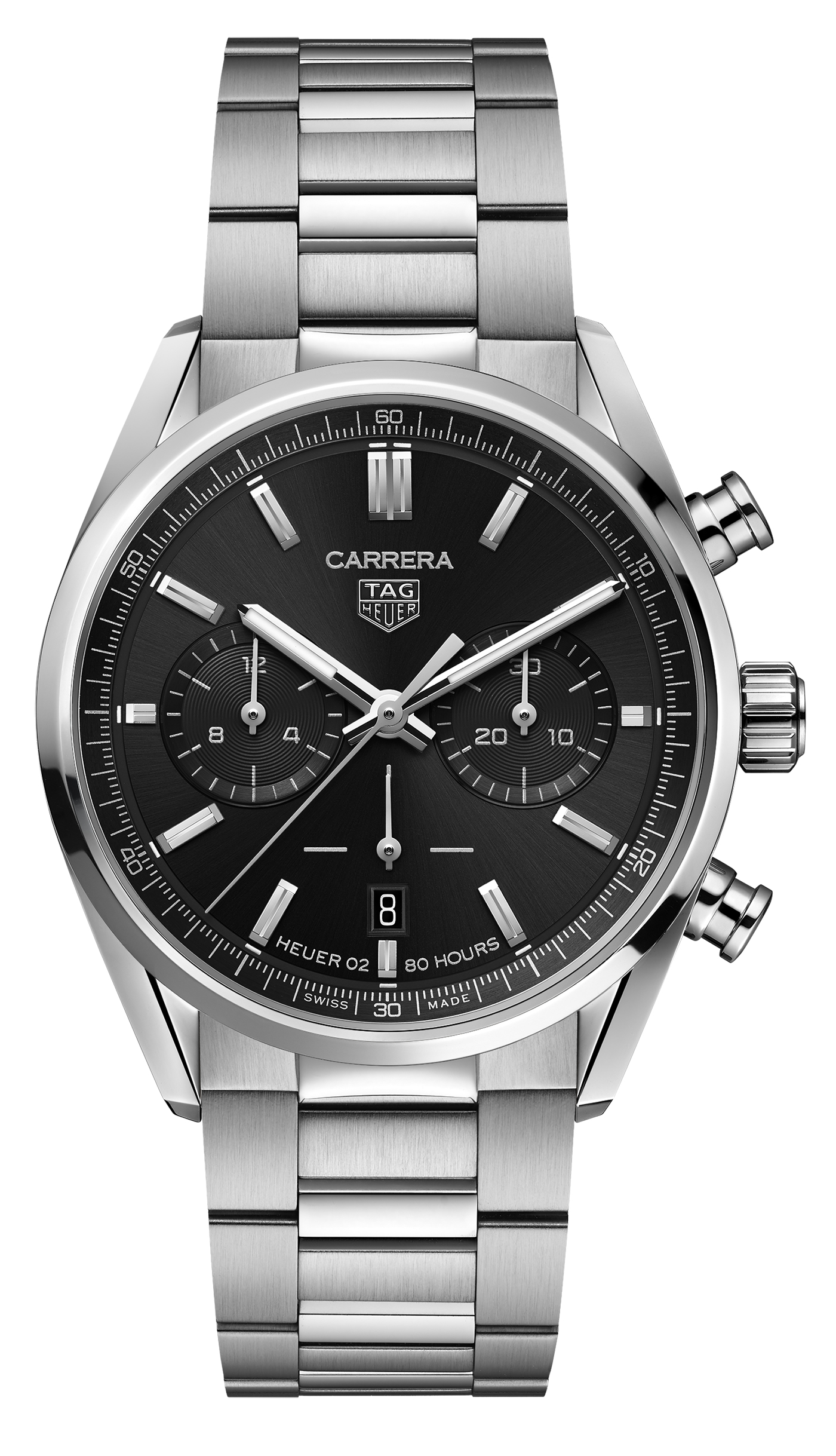 The most drastic departure for the new TAG Heuer Carrera Chronograph is the heavily redesigned case. The new 42mm stainless steel shape takes a middle ground between the wider, bolder Carrera Sport Chronograph models and the thin, simple near-reproduction vintage styles seen in some of this year’s Carrera limited editions. If the case architecture of the Carrera Sport Chronograph is anything to go on, there’s a good chance the 42mm diameter of the new Carrera Chronograph may be misleading, but initial images are vague as to whether the new model will wear as compact as its sporting cousin. Other than the slimmed down profile, much of the form of the Carrera Chronograph is carried over from its stablemates, with the trademark inward angled cut on the tapering lugs, along with wide pump pushers. The other major visual difference for this case is of course the bezel, which swaps out the wide tachymeter insert for a smooth, polished example. Around back, the new Carrera Chronograph series includes a sapphire display caseback to showcase the new movement. 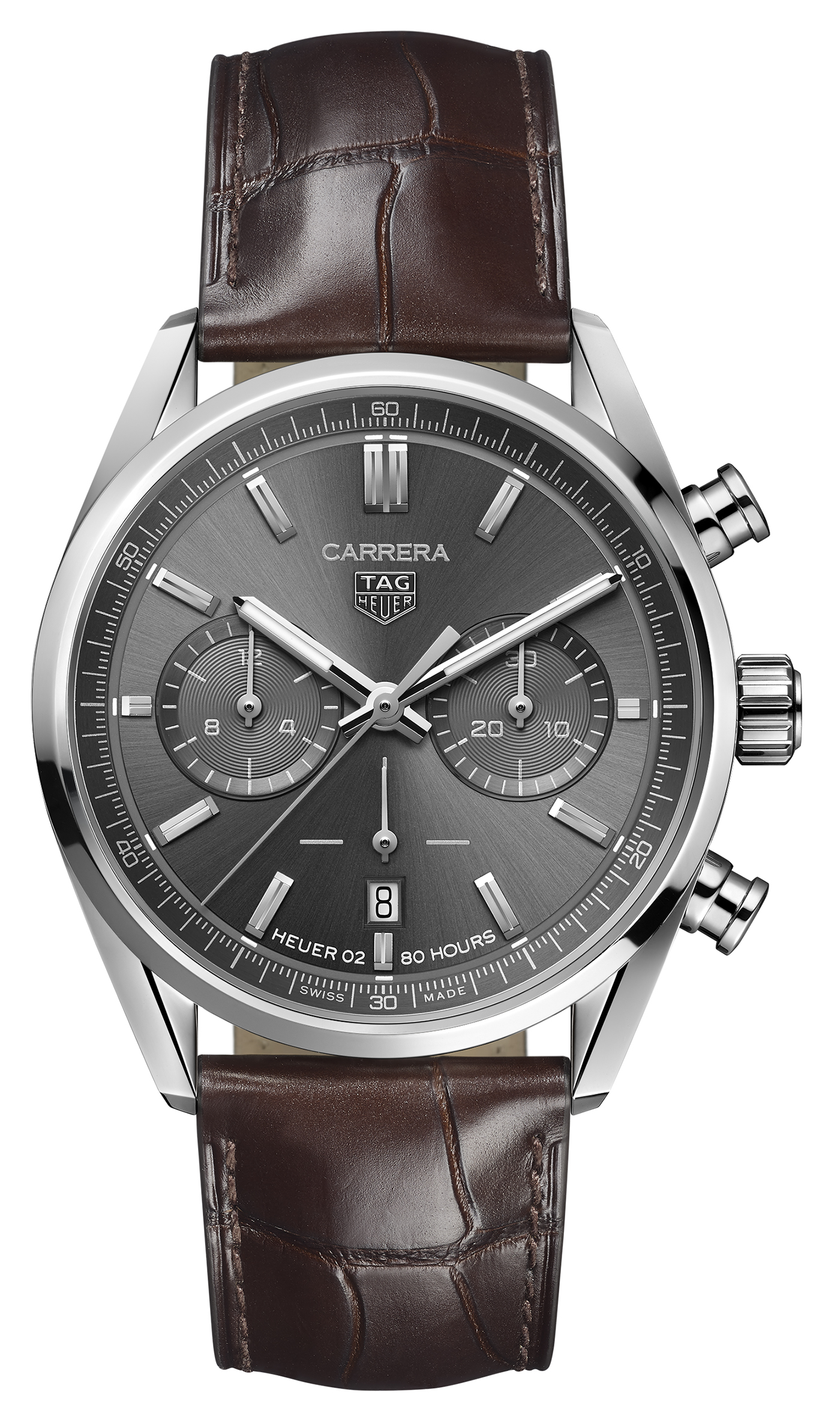 It’s clear from the design of the dials for the new TAG Heuer Carrera Chronograph that the brand aims to create a more uniform look across the Carrera series, but the moderate changes made to the style for this new series are enough to give the Carrera Chronograph its own personality. Like the case, the overall aesthetic is a slimmer, more elegant take on the Carrera Sport Chronograph, with narrower applied indices and the same distinctive TAG Heuer pointed baton hands featuring the iconic central stripe. There’s more than a passing family resemblance between the two lines through the chronograph subdials as well, with the Carrera Chronograph sharing the same raised outer chapter rings surrounding the 3 o’clock and 9 o’clock subdials. The 6 o’clock small seconds takes a different tack, however, as TAG Heuer nearly eliminates the subdial entirely in favor of a minimalist set of hash marks at 15-second intervals. The other major change comes through the dial surfaces themselves, which replace the Sport Chronograph’s deep radial brushing with a more traditional sunburst pattern. Variations include a classic black and deep blue dial variant, along with a light silver dial with rose gold plated hardware. From initial images, however, the real standout of the collection is the graphite gray dial version. In images, this smoky tone looks refined, classical, and versatile, while remaining different enough from black to feel distinct and special. 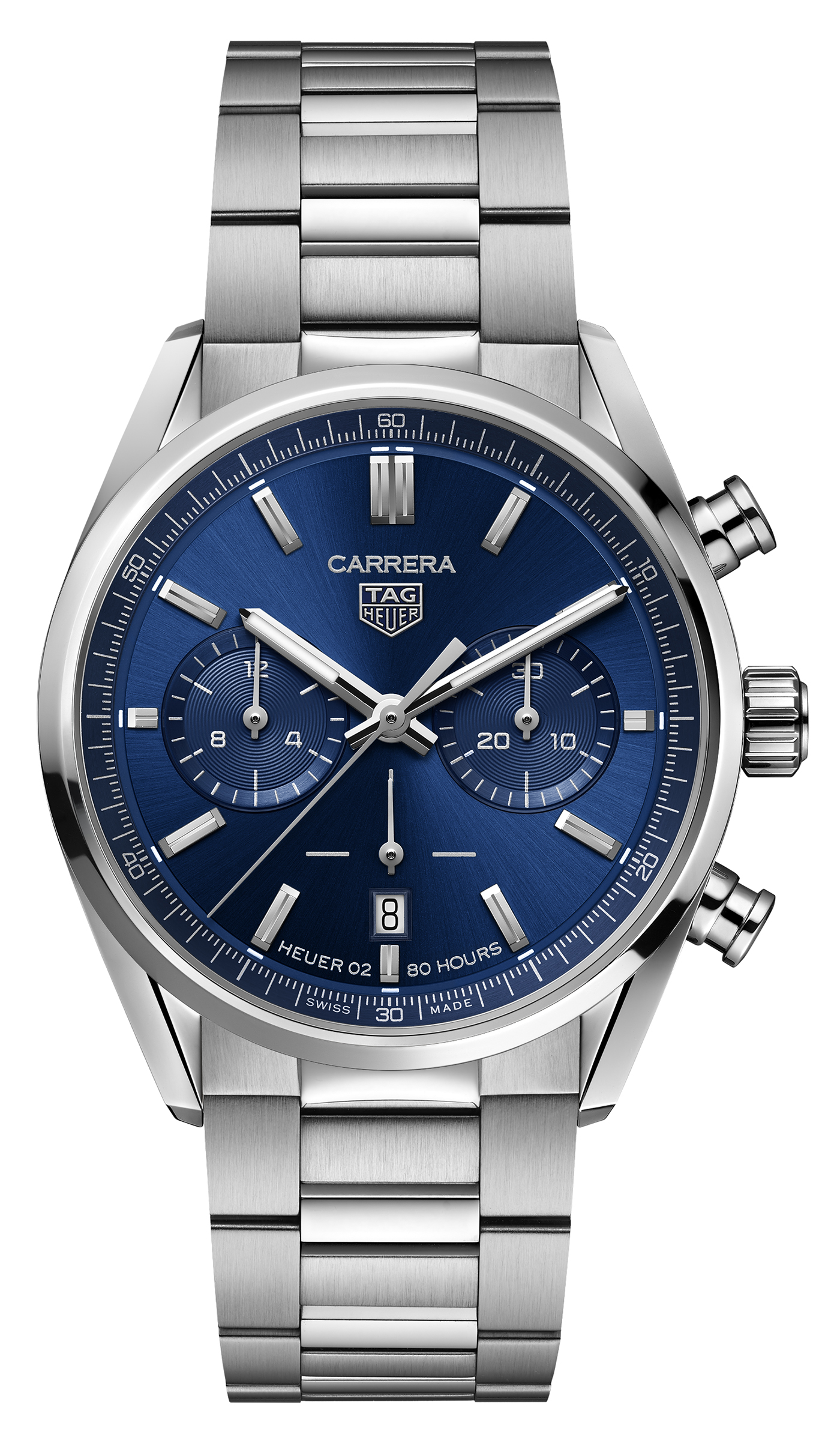 One of the real highlights of the new TAG Heuer Carrera Chronograph is the manufacture Heuer 02 automatic chronograph movement. The Heuer 02 has quickly become the movement of choice for TAG Heuer’s higher-end chronograph lines, and the specifications make it easy to see why. Featuring the coveted combination of a vertical clutch and column wheel actuation system for the chronograph, the Heuer 02 marries these classical watchmaking elements with a thoroughly modern 80-hour power reserve. A smooth 28,800 bph beat rate helps to ensure a steady seconds sweep. 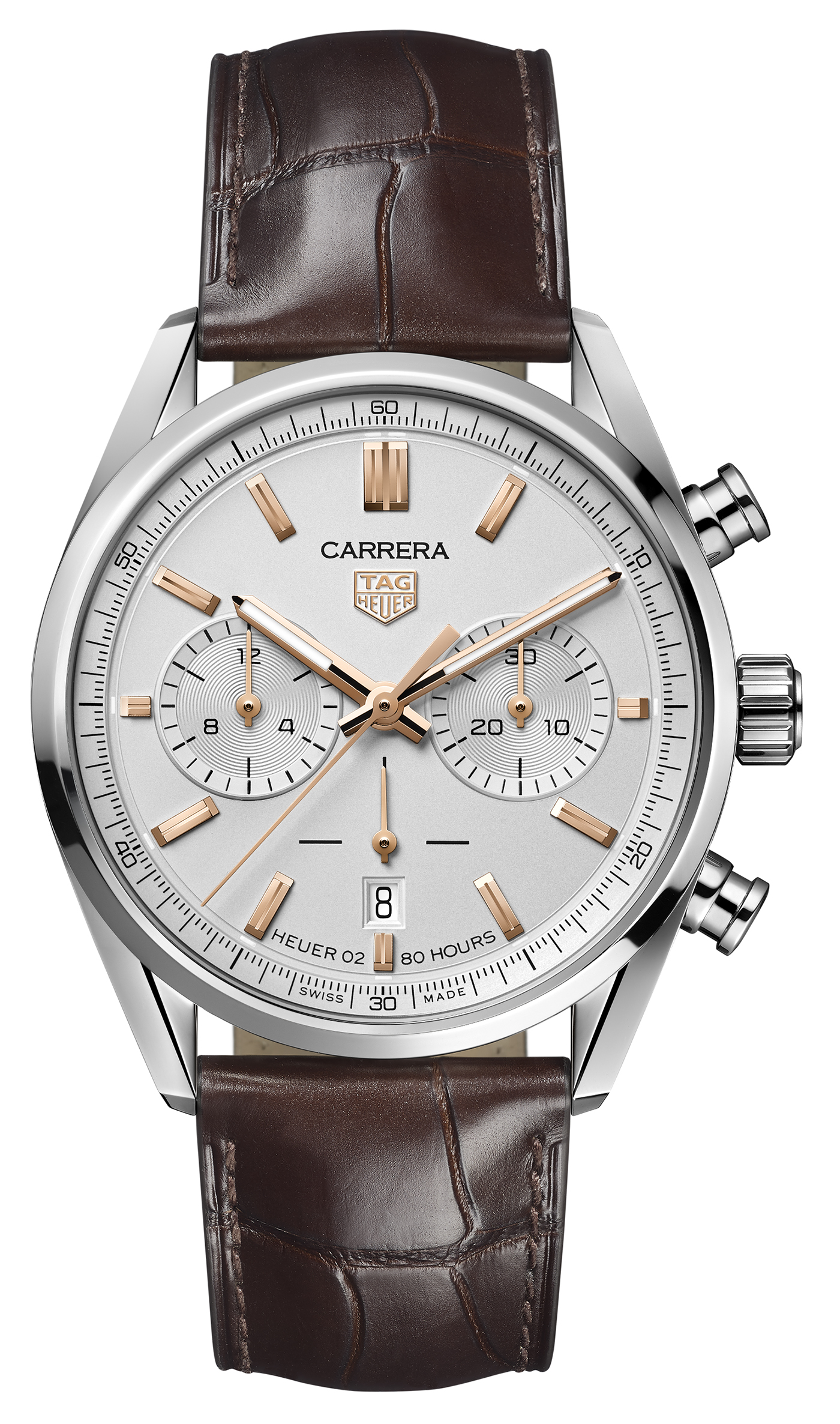 TAG Heuer pairs the Carrera Chronograph with one of two strap options depending on dial configuration. For black and blue dial models, the brand uses its sharp, angular take on an H-link bracelet, emphasizing the more sporting side of the collection. For the silver and gray dial variants, however, the watches are mounted on an alligator leather strap in a deep mahogany brown. This more luxurious option helps to highlight the more refined aspects of the design, and in photos seems to set off the overall watch more dramatically. TAG Heuer finishes this strap with a push-button deployant clasp. 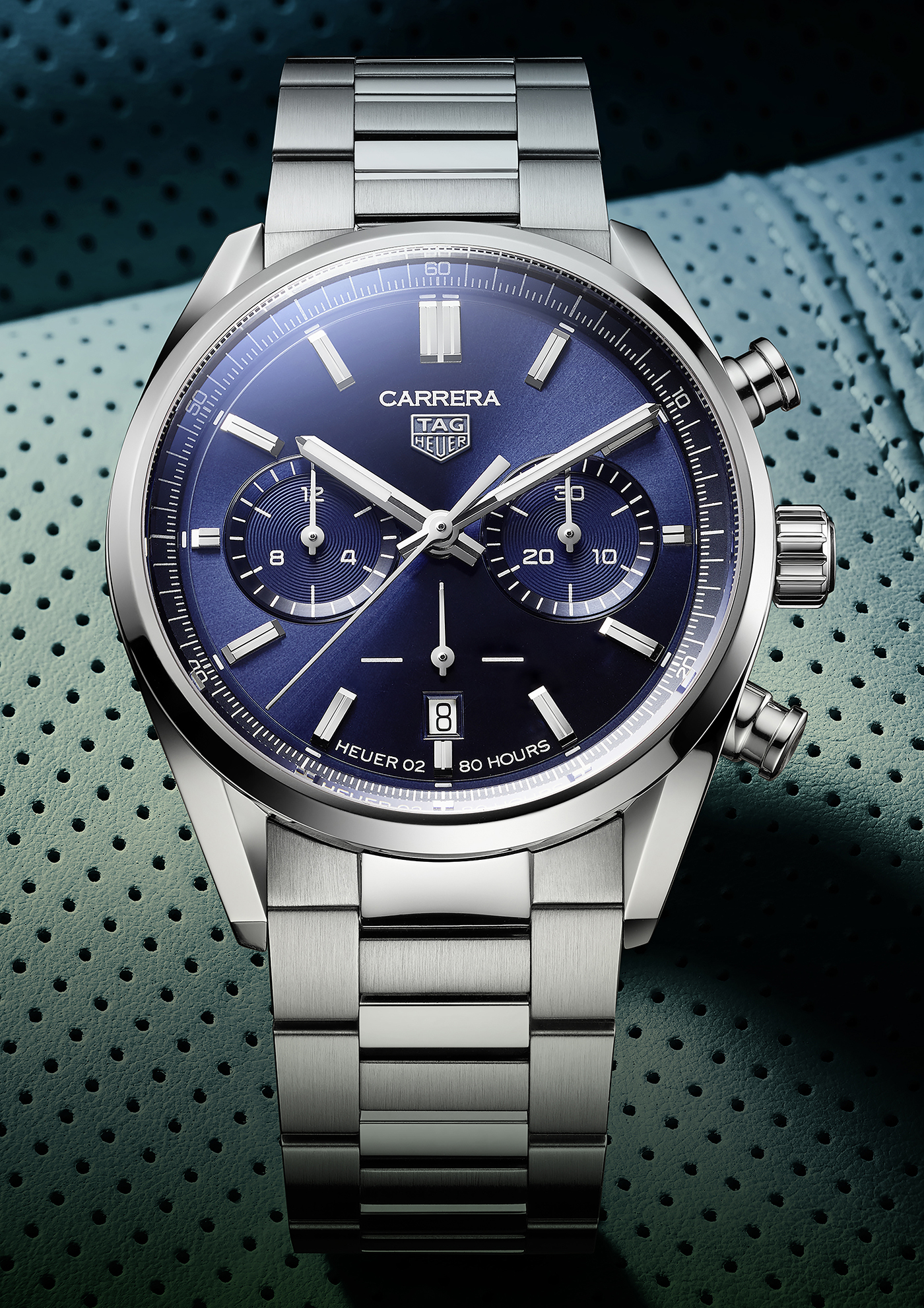 The TAG Heuer Carrera Chronograph series helps to further solidify the Heuer 02 movement as a new flagship for the brand while bringing the dressier half of the Carrera collection in line with the marque’s new evolutionary design language. All four models of the new TAG Heuer Carrera Chronograph series will be available in October 2020, with a starting MSRP of $5,350. To learn more, please visit the brand’s website.