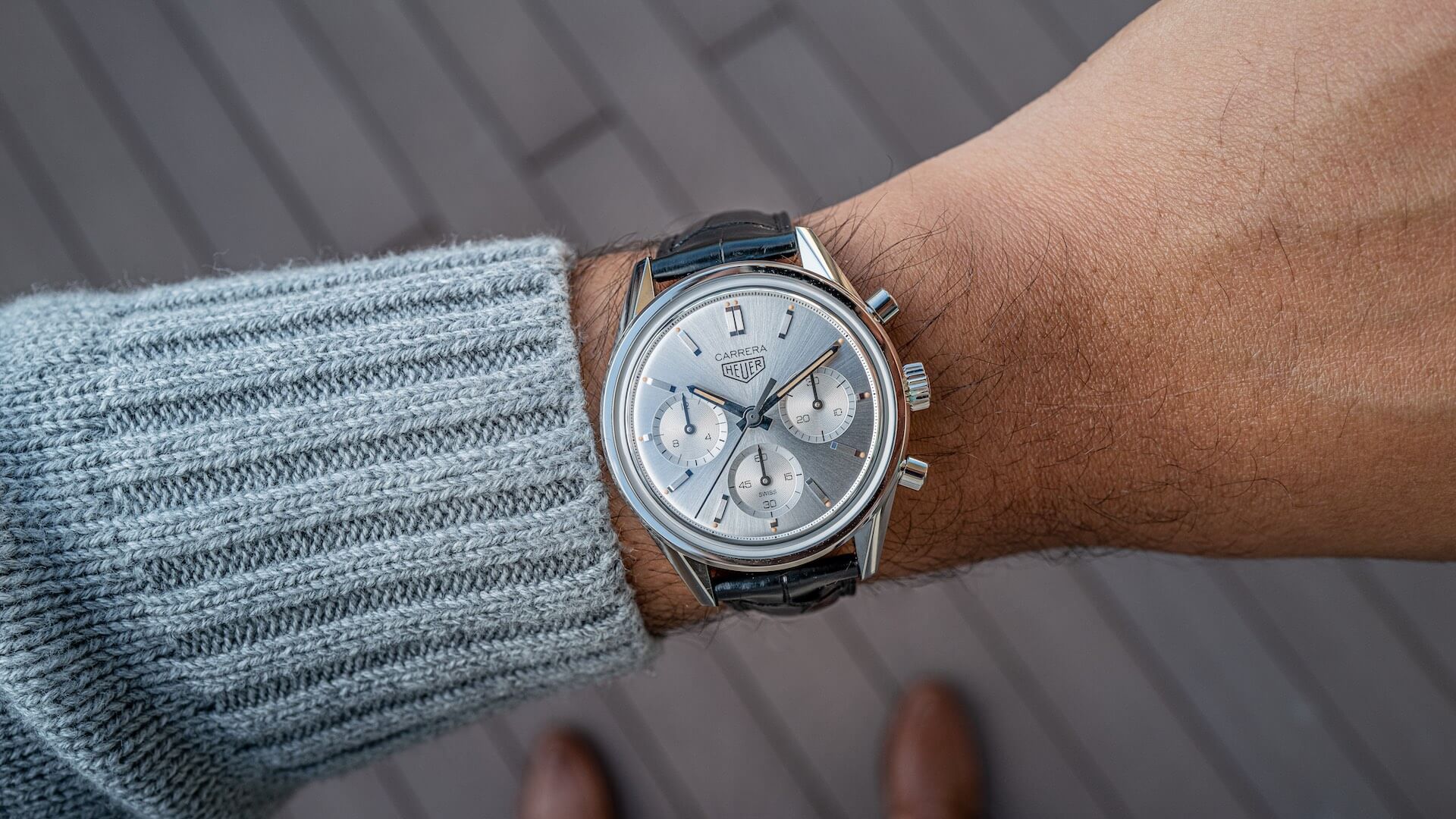 Editor’s Note: Bilal here. I just got the chance too try on this watch and shoot it in the metal out here at the LVMH Dubai Watch Week. Sean gets into all the context, history, and background of this watch but I wanted to share some impressions that you need to know from a hands-on. First off, the proportions on the 39mm case of the Carrera 160 Years are absolutely killer and I can’t nitpick the upsizing in relation to the original 36mm 2447S. Is the case a little chunky? Yeah it is, and though I wasn’t able to get an exact measurement I’d venture to say it’s around 14mm thick.

I think the photos will get this across, but the dial looks so clean and crisp, the sub-dials look good under closer inspection, and the hands are legible over the brushed sun-ray dial. Overall,  TAG Heuer knew where to leave well enough alone and understood that a simple watch relies on nailing the small things. There’s a lot of history behind the concept of this watch, but putting all that (necessary) talk aside I found it to be a  faithful and successful re-edition of a classic. My verdict: if you’re slightly intrigued then go try it out. This one shines in person. -BK 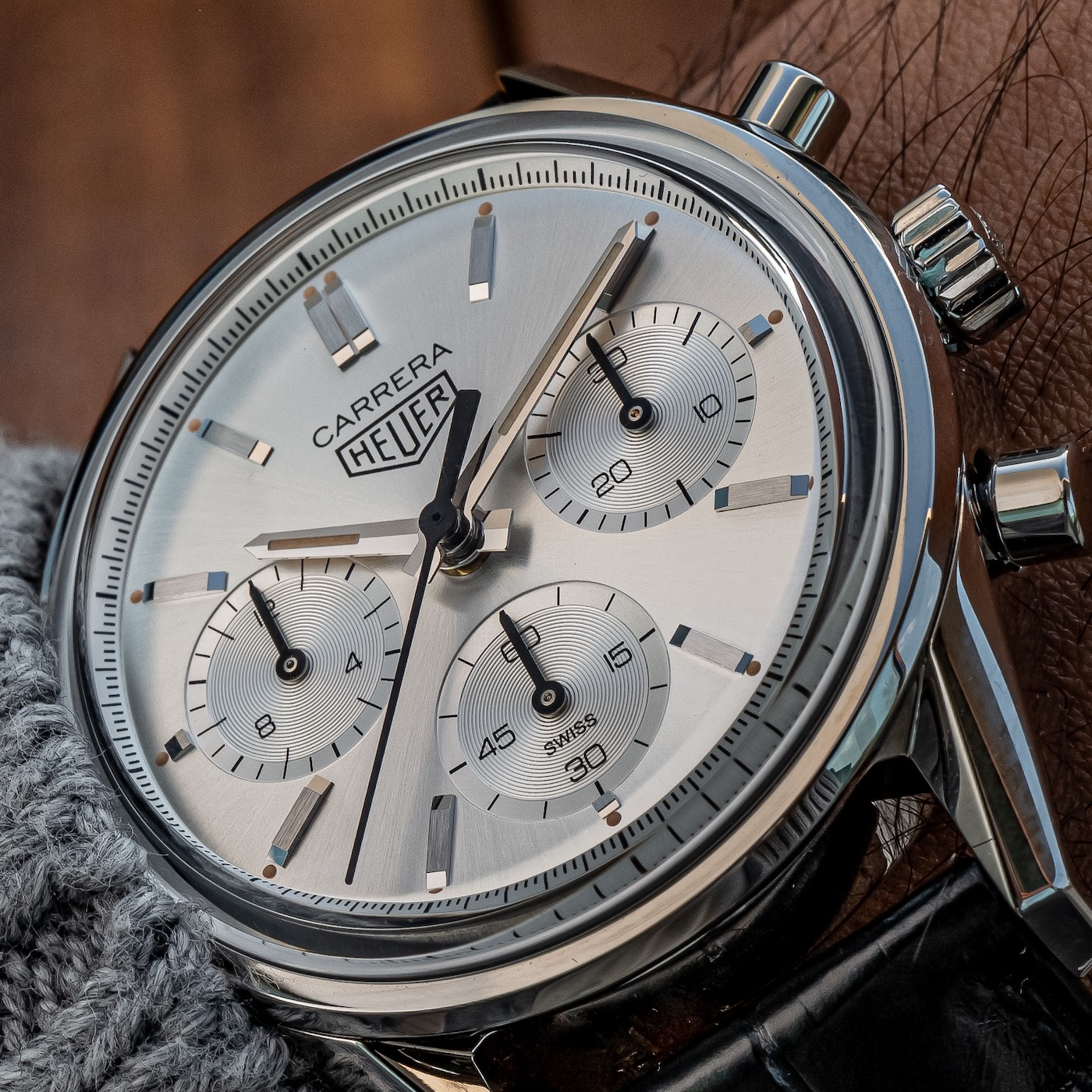 Although it’s been through multiple iterations, owners, and branding changes, TAG Heuer is one of the oldest major brands in the watch industry, with a history of continuous production dating back to before the American Civil War. As the first salvo in a year of planned celebrations for the brand’s 160th anniversary in 2020, TAG Heuer has recreated one of the most famous references of its flagship Carrera chronograph line: the 1960s Carrera 2447S. This new version, the TAG Heuer Carrera 160 Years Silver Limited Edition, is an impressively faithful recreation of the Heuer original, finished to modern standards and powered by TAG Heuer’s in-house Heuer 02 automatic chronograph movement. 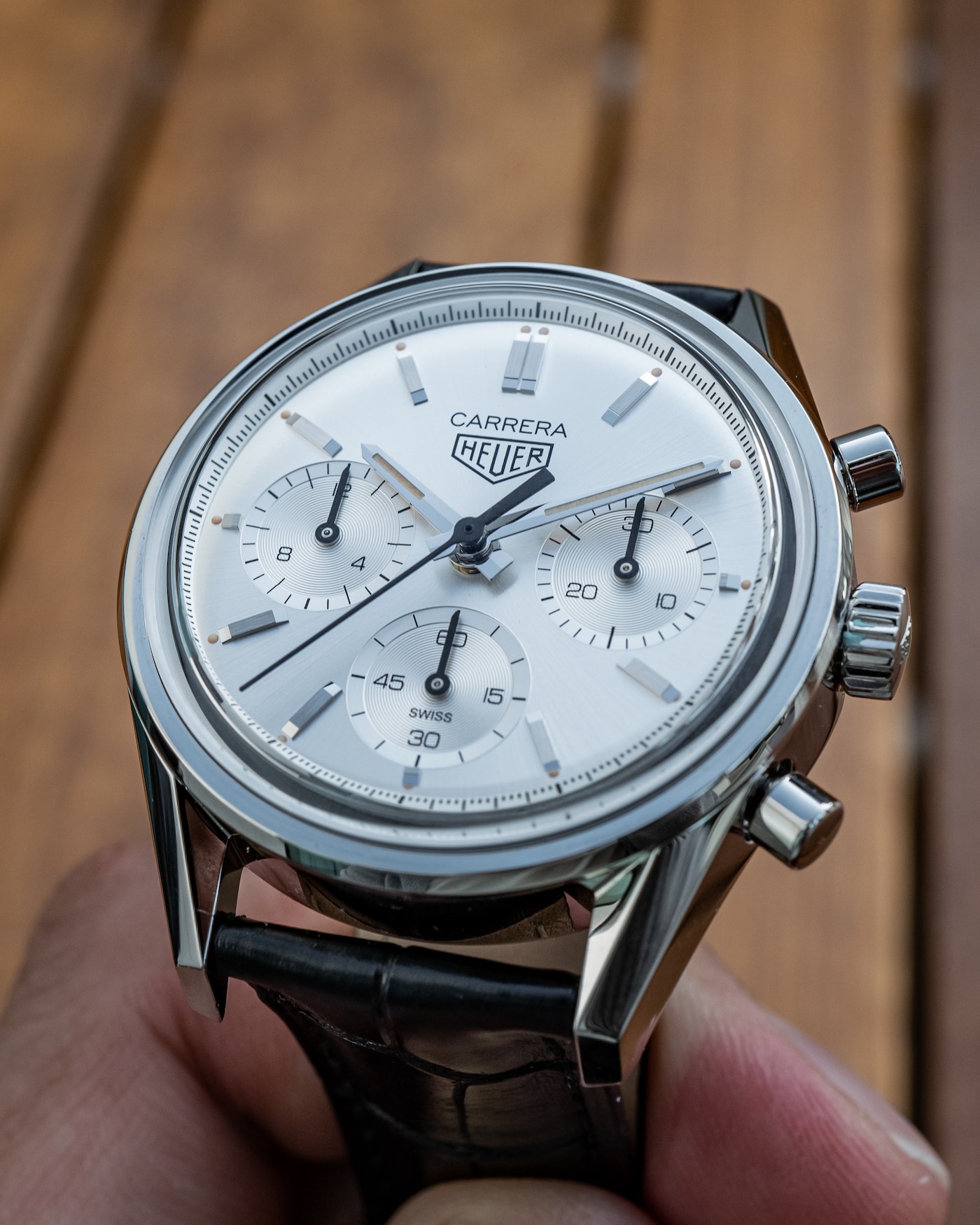 While slightly upsized from the 36mm original, this new interpretation of the 2447S remains compact at a 39mm overall case diameter. While some purists may disagree, the increase in size may even propel it above the original, allowing the watch some noticeable wrist presence without leaving a vintage-style size entirely. The lines at play are all classic ‘60s Heuer, too, from the unadorned slender bezel to the distinctive beveled lugs. Even the sapphire crystal is domed for a retro feel. The real point of divergence for the Carrera 160 Years Silver Limited Edition, however, is the caseback. TAG Heuer has opted for a broad sapphire display window here, showcasing the uniquely decorated Heuer 02 automatic movement within. 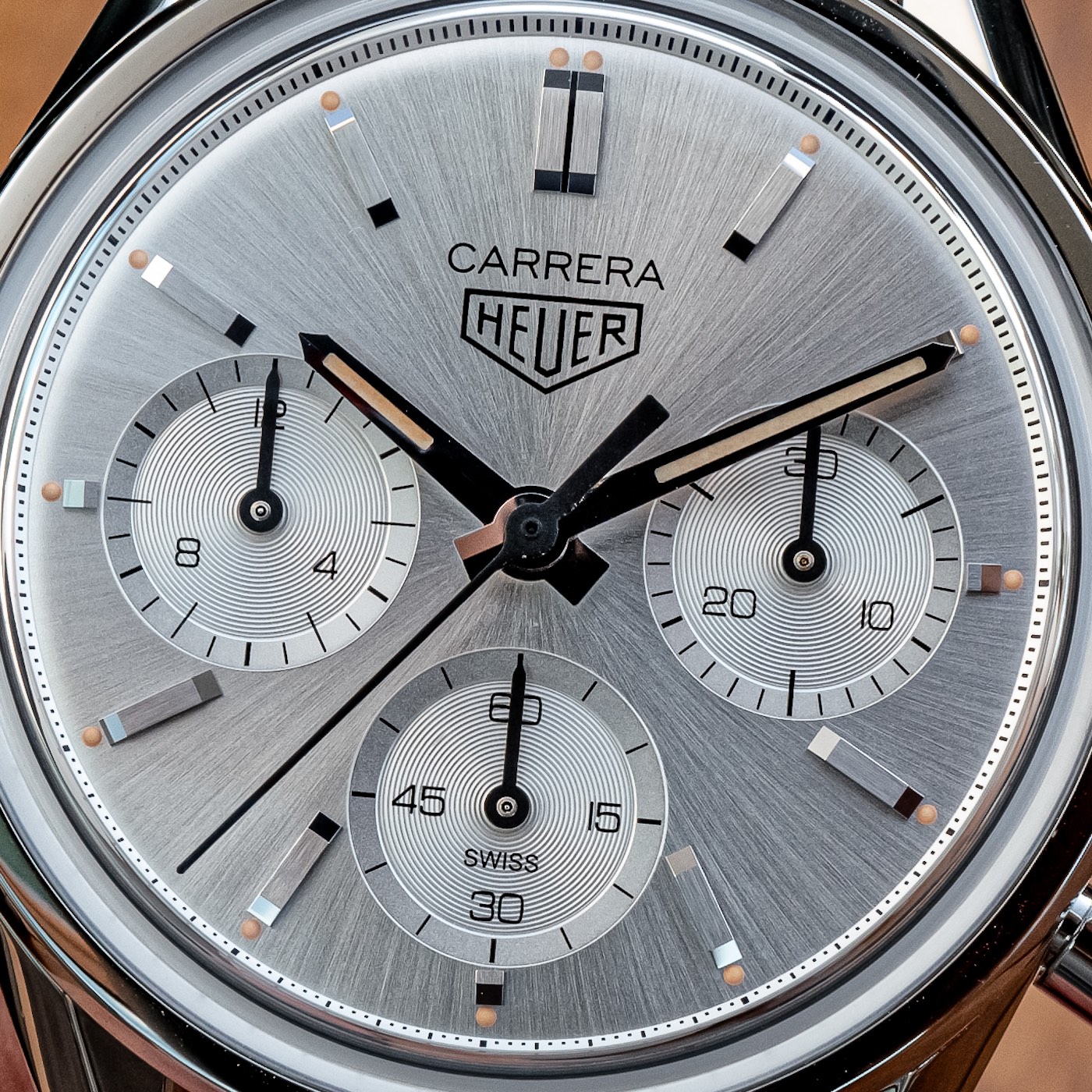 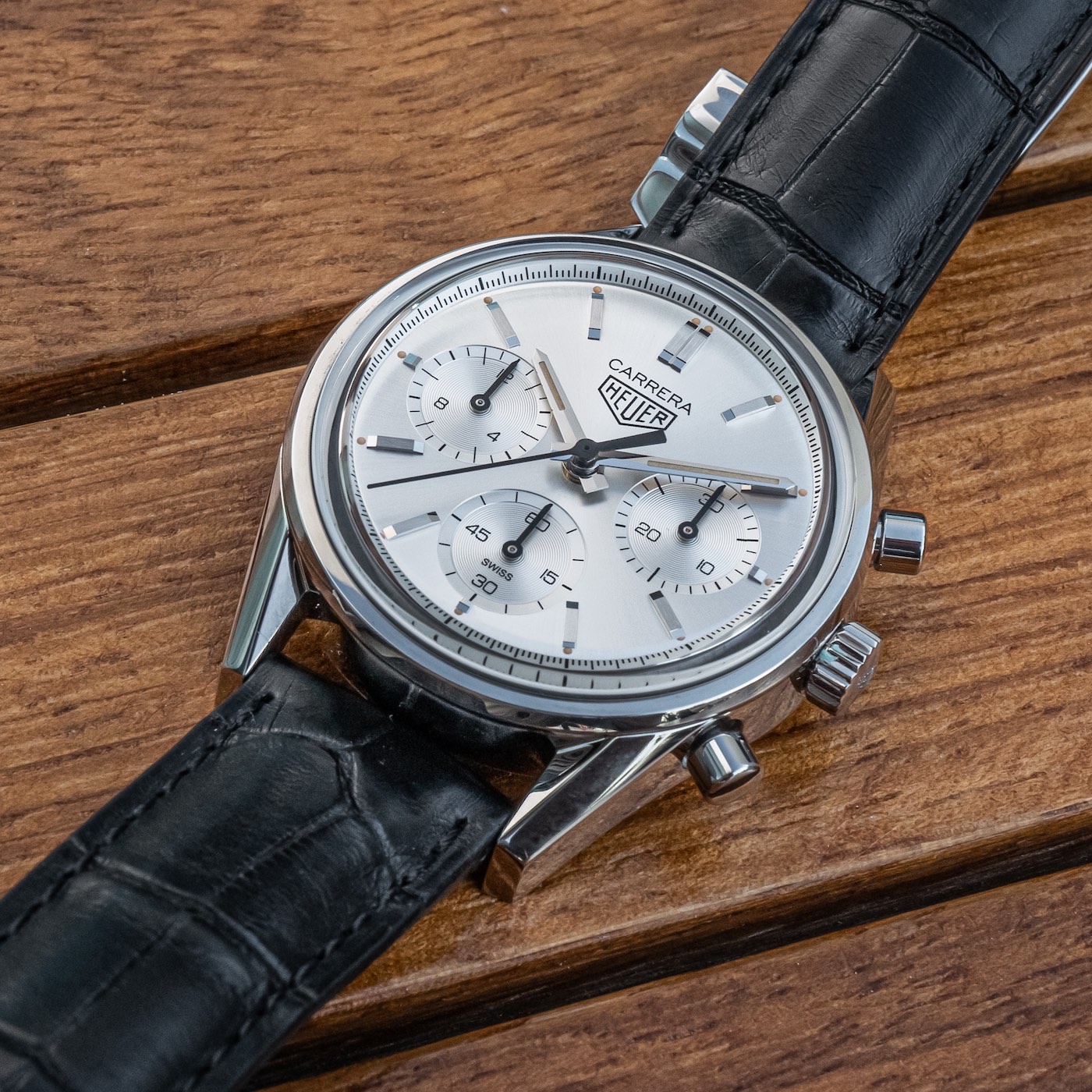 Like the case, the dial of the TAG Heuer Carrera 160 Years Silver Limited Edition cleaves very close to the look of the classic 2447S, while adding touches of modern luxury and cleaning up certain visual proportions. The original Heuer shield emblem and Carrera dial text are perfectly replicated at 12 o’clock, along with a nearly identical set of pointed baton hands that shine brighter than the originals, thanks to a subtle beveling. The neutral sunburst silver of the main dial is replicated very closely, as well, but differences start to appear once one’s attention drifts to the subdials. Of course, thanks to the different layout of the Heuer 02 movement versus the original’s Valjoux 72, the running seconds subdial moves from 9 o’clock to 6 o’clock, but the improved finish of the new model is the most starkly apparent change. 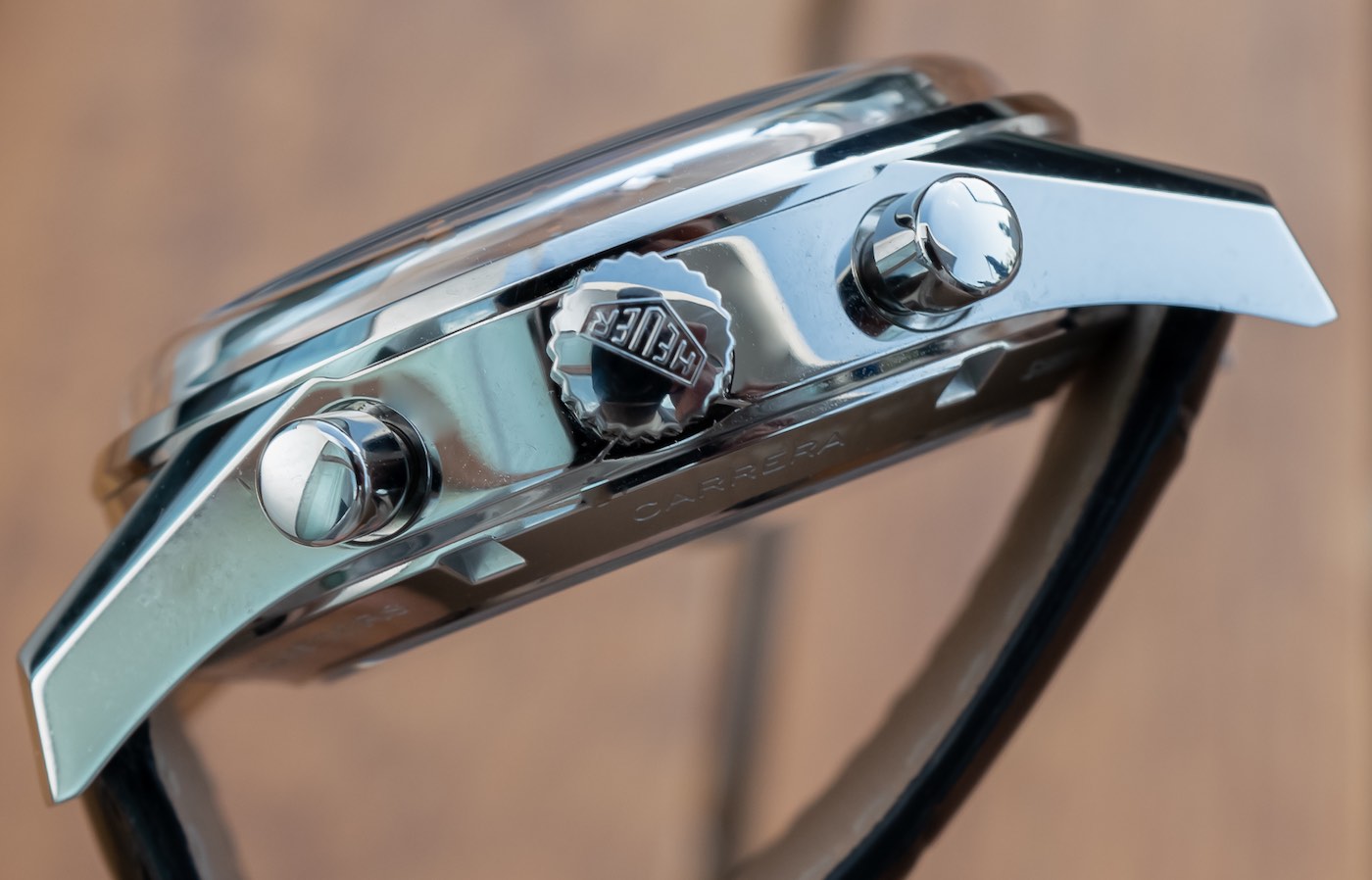 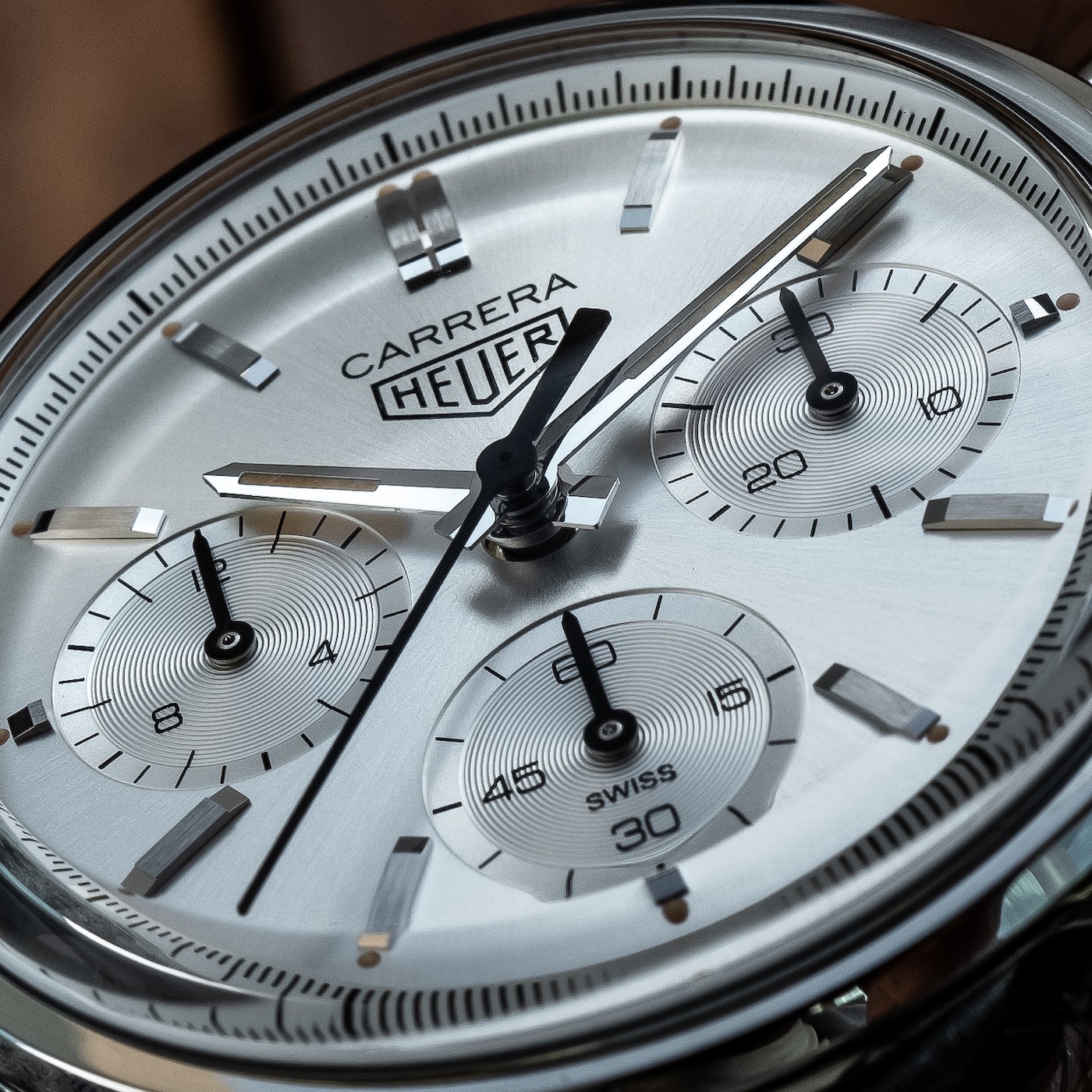 While the 2447S settled for printed subdials with a hint of snailing finish, the new version seats each subdial in its own sloping bezel for added visual depth while the snailing finish is made far more dramatic. The other, subtler visual changes come around the chapter ring. Original ‘60s Carrera models were usually equipped with a tachymeter or decimal scale just inside the seconds track of the chapter ring, but here the scales are deleted, allowing room to extend the applied hour indices outward towards the edges of the dial. The overall effect is cleaner, smoother, and feels visually larger than the original without adding much in the way of actual size. The point of contention for enthusiasts on the new dial, however, will likely be the use of faux-patina khaki lume, but given the size of the lume fills on the hands and the pips outside the indices, the visual effect of the lume is minimal. 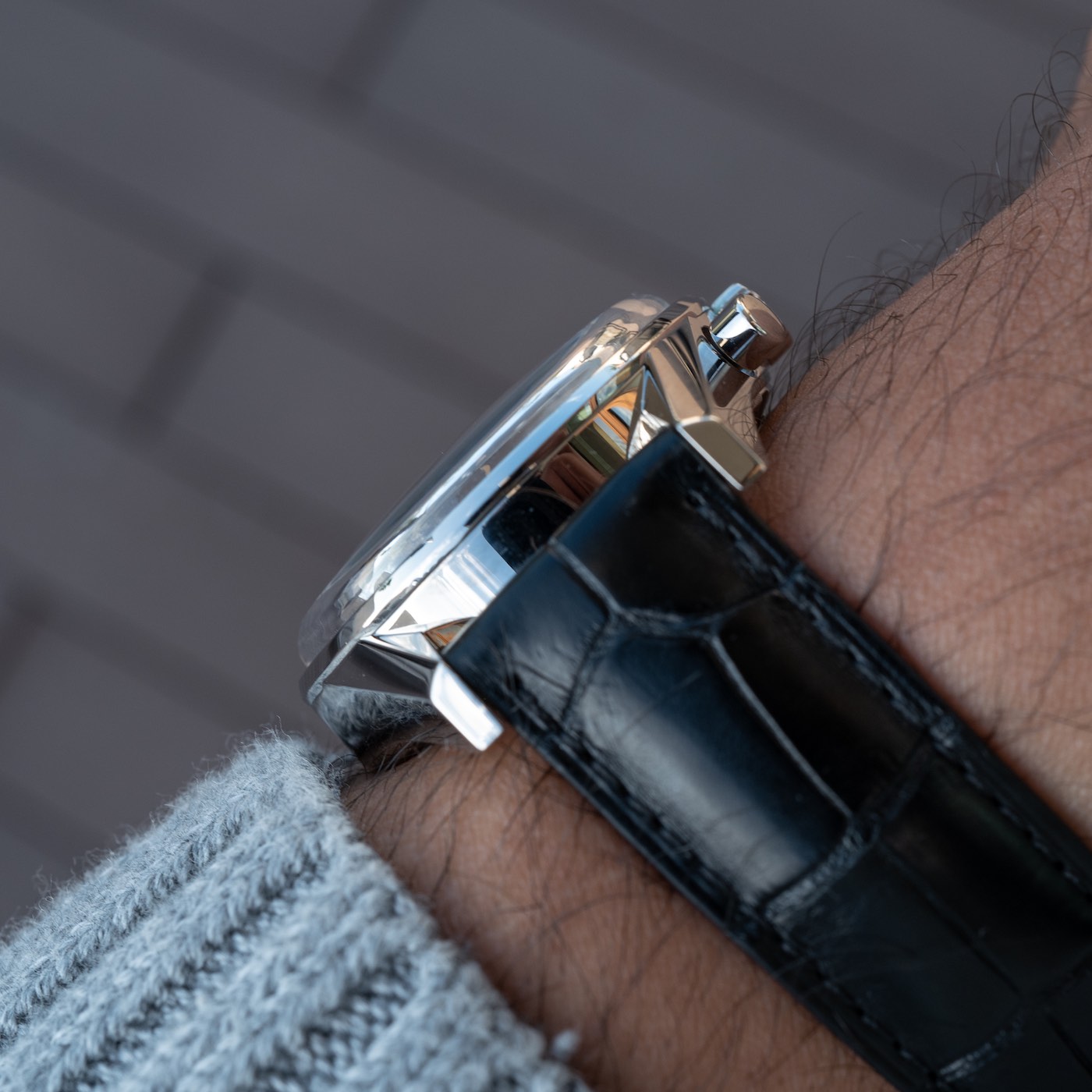 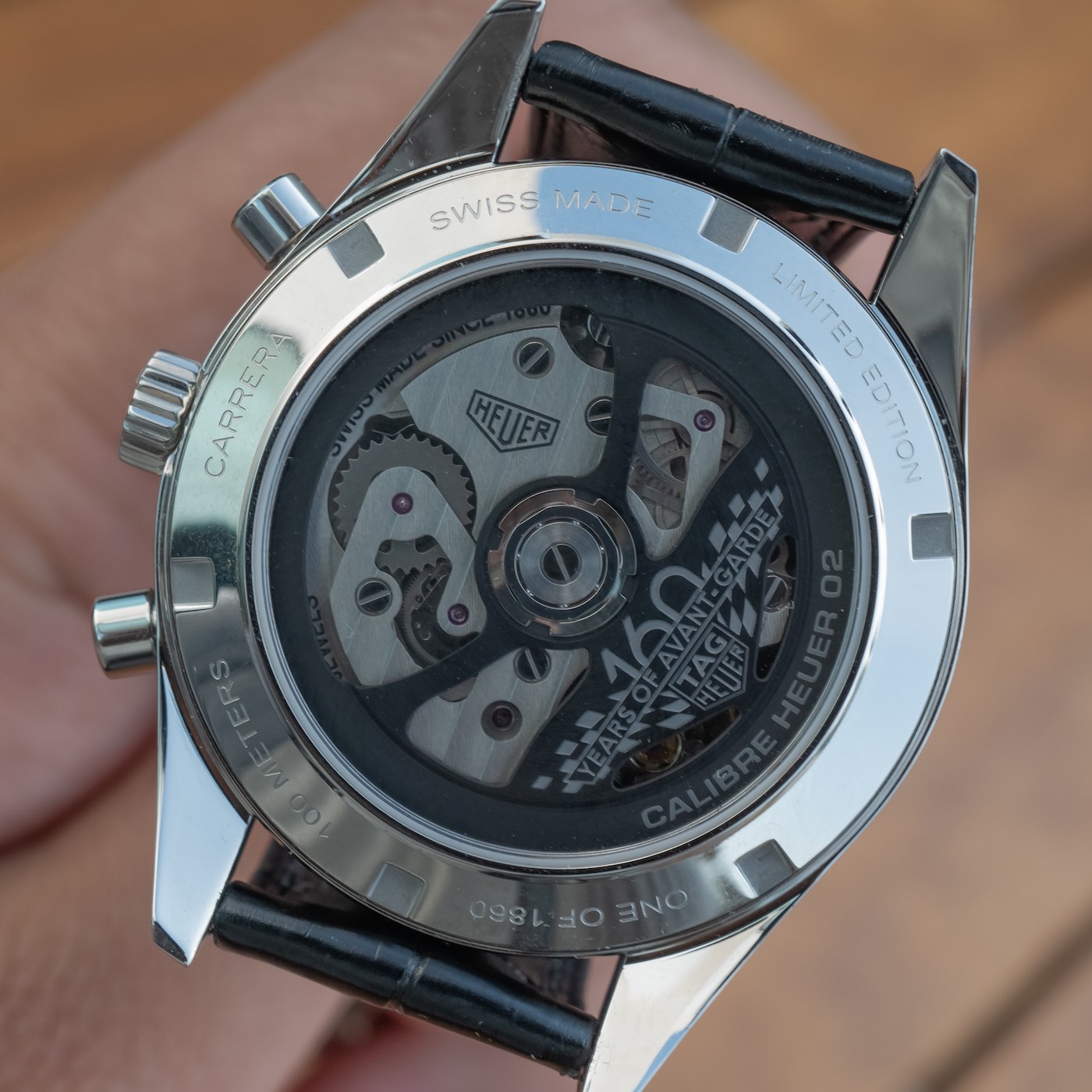 TAG Heuer equips the Carrera 160 Years Silver Limited Edition with its flagship in-house automatic chronograph movement, the Heuer 02. This is an impressively engineered piece, featuring a column wheel, vertical clutch, and a massive 80-hour power reserve. For this specific application, the movement also receives some special decoration in the form of a custom-engraved black winding rotor with an inscription celebrating the marque’s 160th anniversary. 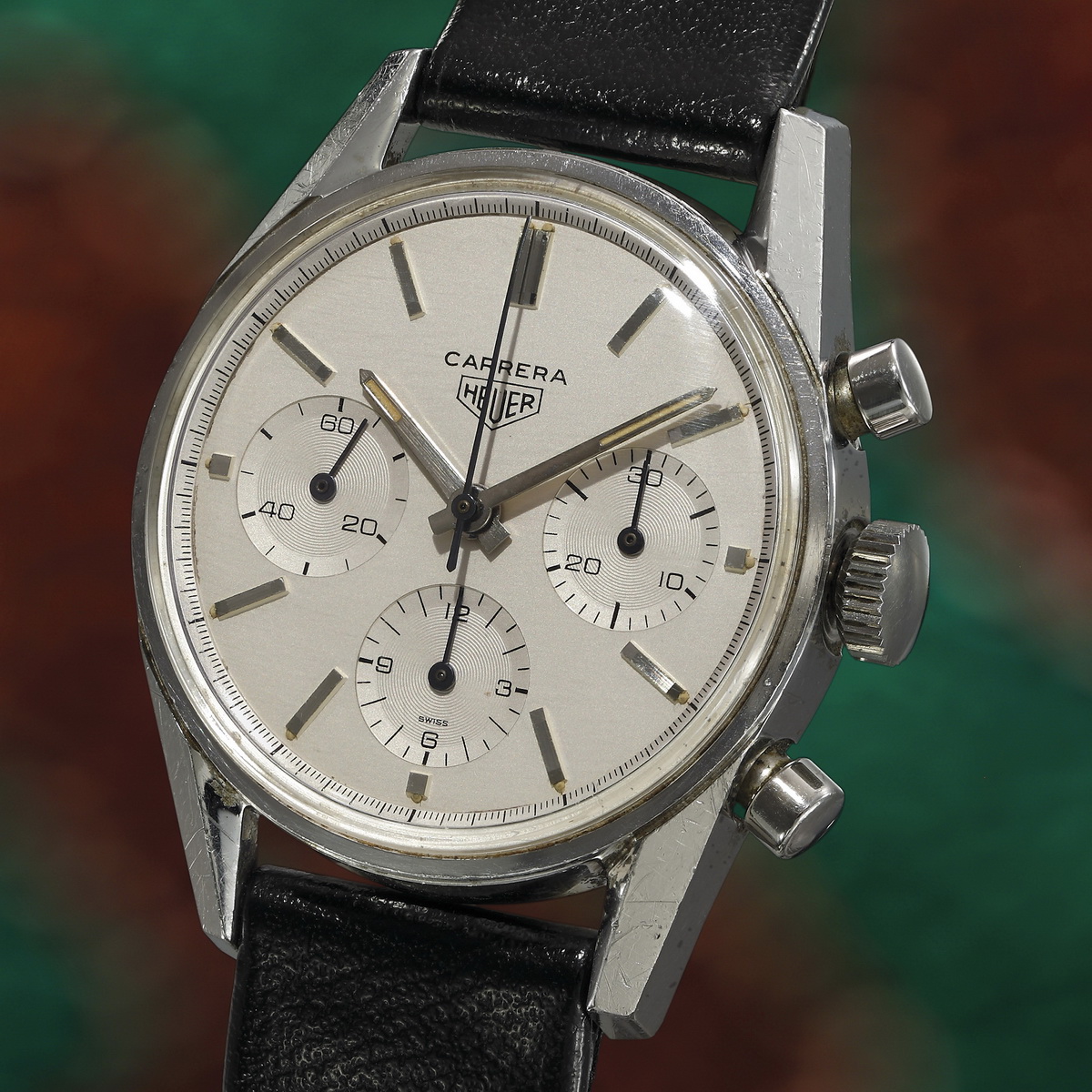 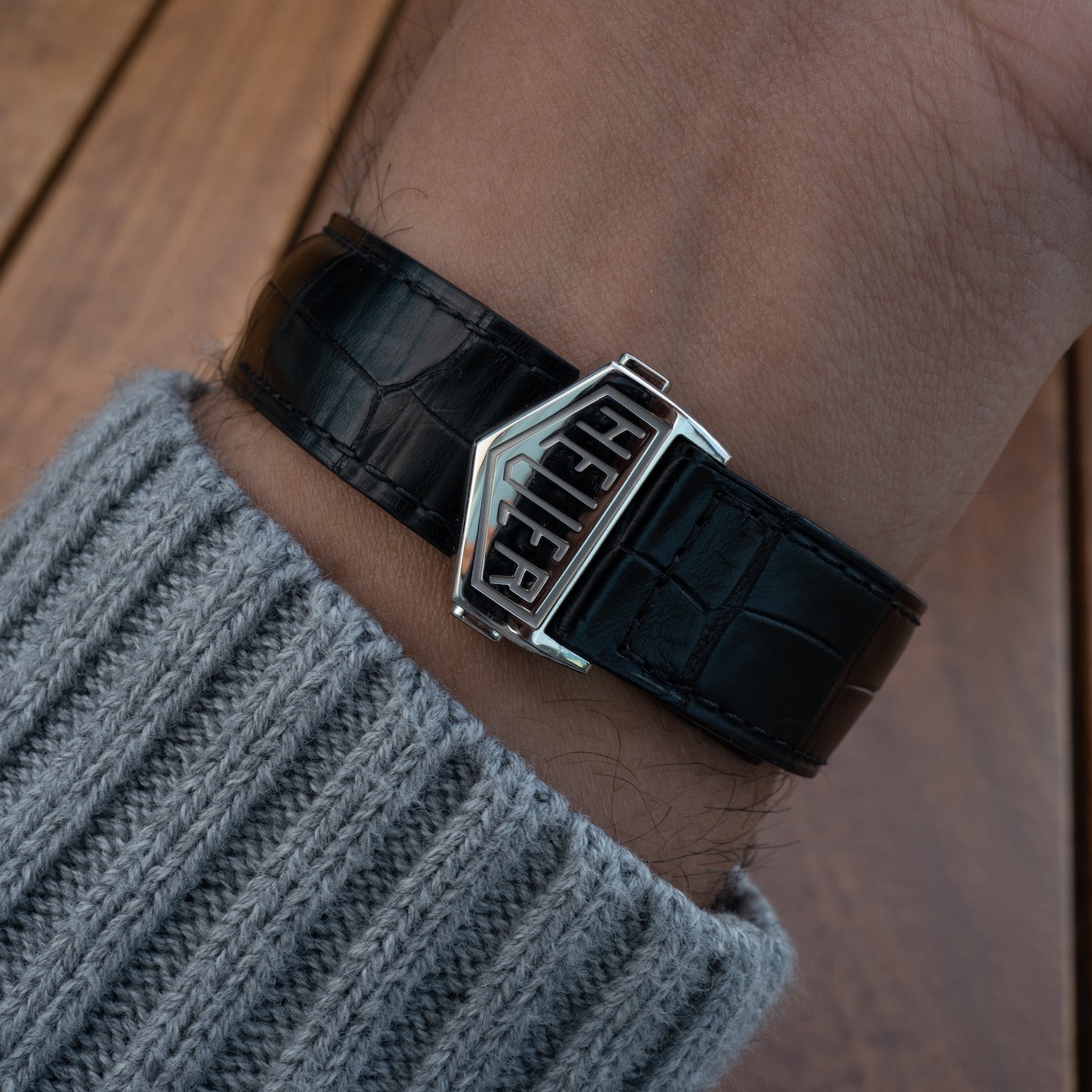 TAG Heuer pairs the new Carrera with a black alligator leather strap and signed deployant clasp. While the strap itself is handsome enough, a perforated rally strap might have helped to drive the ‘60s inspiration home while better matching the visual style of the watch. 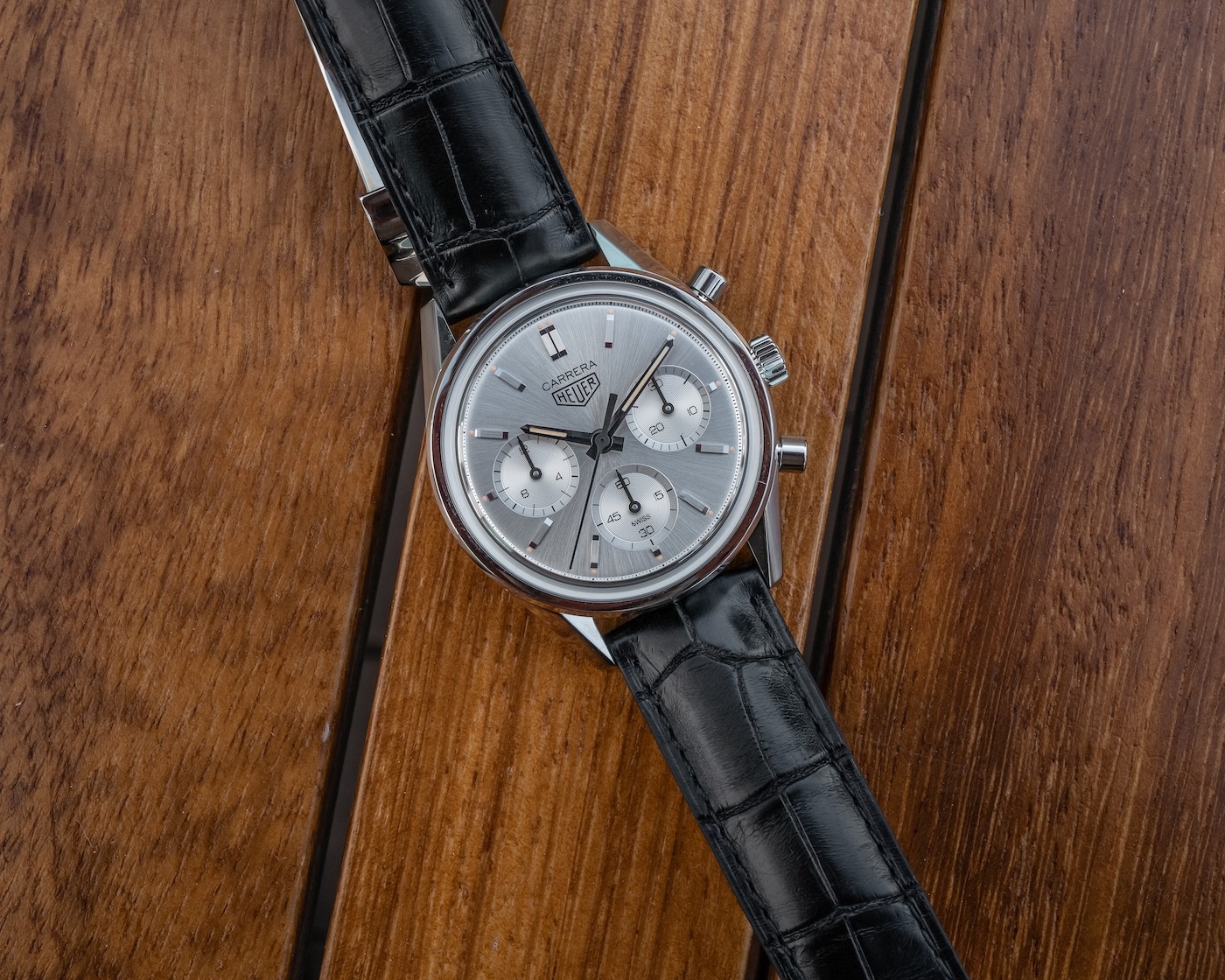 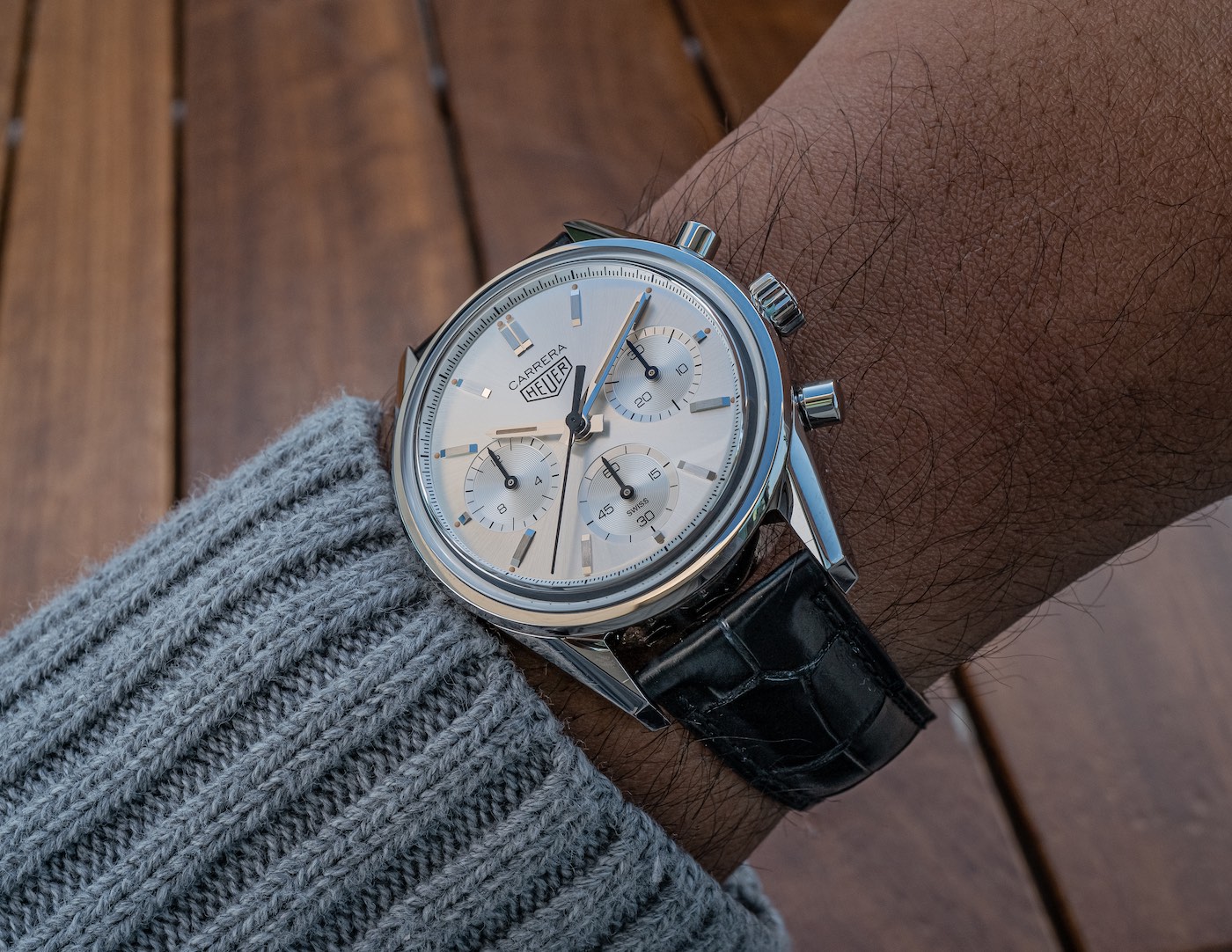 Based on first impressions, it looks as though the TAG Heuer Carrera 160 Years Silver Limited Edition might be one of those rare reissues that lives up to the weighty expectations from the watch it’s based on. Only 1,860 examples will be made to celebrate the brand’s 160th anniversary and will be available from TAG Heuer authorized retailers beginning in June 2020 with a price around $6,450. For more details, please visit the brand’s website.