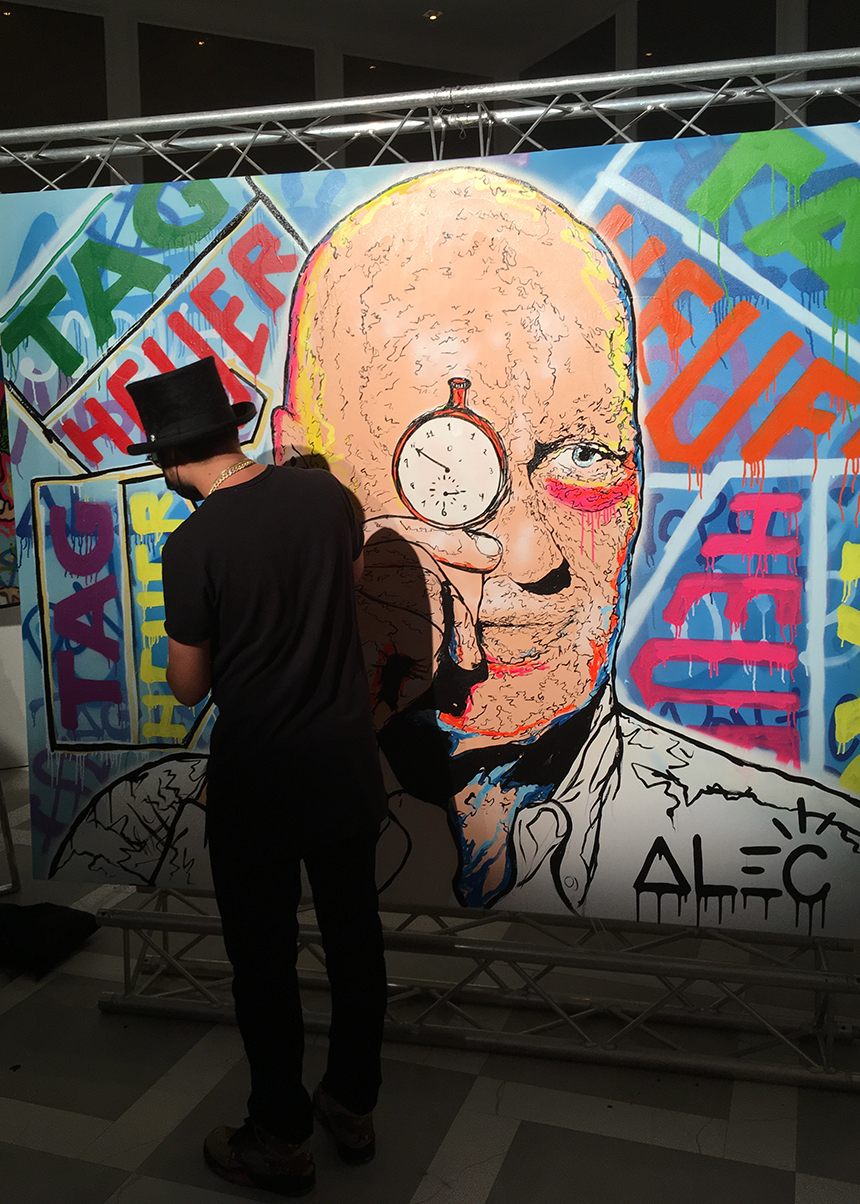 TAG Heuer’s headquarters during Art Basel Miami 2016 was the Mondrian Hotel, where the company announced its new partnership with graffiti artist Alec Monopoly. The artist painted a huge mural on the side of the hotel, exhibited several works in the TAG Heuer lounge, and unveiled a new painting – a portrait of brand president Jean-Claude Biver. But the partnership is more than just a publicity program for the duration of Art Basel Miami, and it involves more than just requiring the artist to wear a TAG Heuer watch. Alec Monopoly’s new job is to achieve nothing short of transforming the brand culture of TAG Heuer. 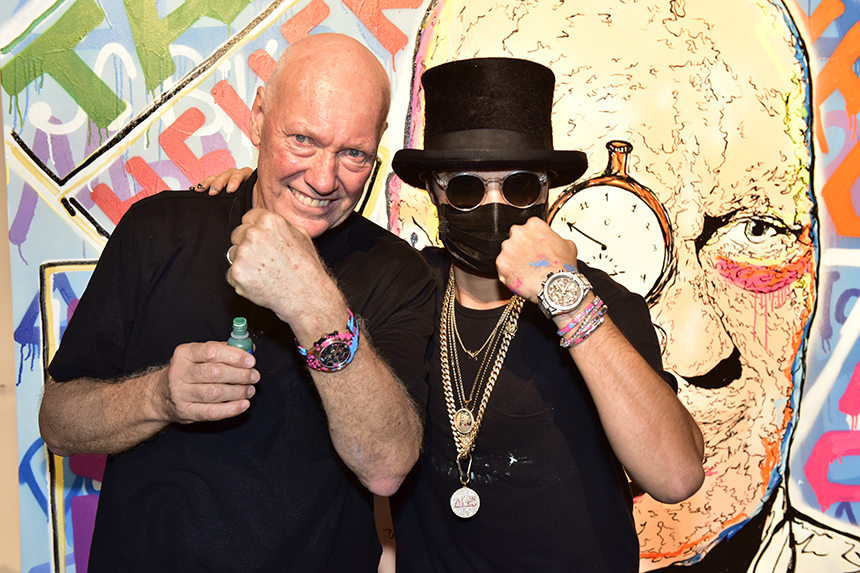 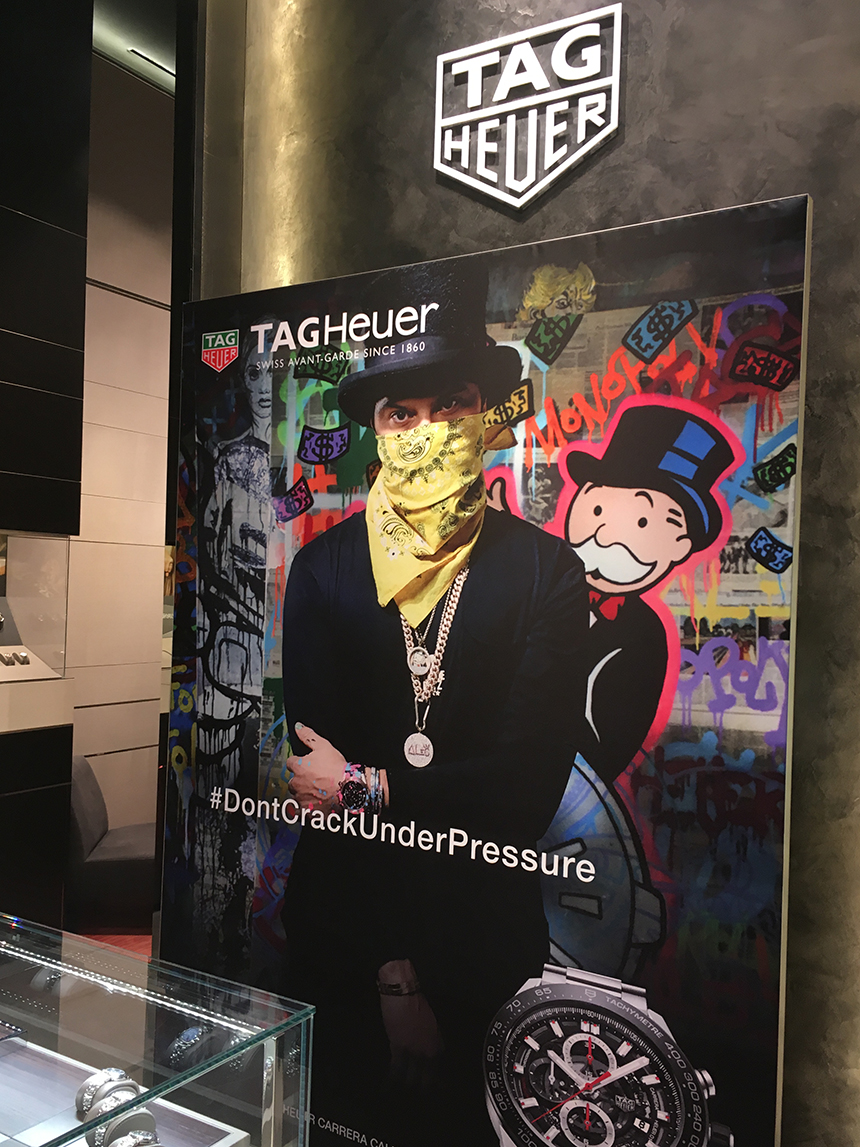 Graffiti artist Alec Monopoly will appear in TAG Heuer ads and will paint several works to appear in the TAG Heuer boutiques.

Over the next 10 years, Alec Monopoly will create 20 or 30 paintings a year for TAG Heuer, to be hung in the boutiques worldwide. He will also design POS material, billboards, and other marketing materials. For starters, he “tagged” the TAG Heuer boutique in Miami’s design district, with new paintings unveiled during a reception on November 29. To commemorate the occasion, Biver presented Monopoly with a gift: a TAG Heuer Carrera Heuer-02T tourbillon chronograph watch (reviewed here), the only one fully set with diamonds. Biver has even set up a studio for Monopoly at TAG Heuer’s manufacture in La Chaux-de-Fonds, where he will create some of the paintings. 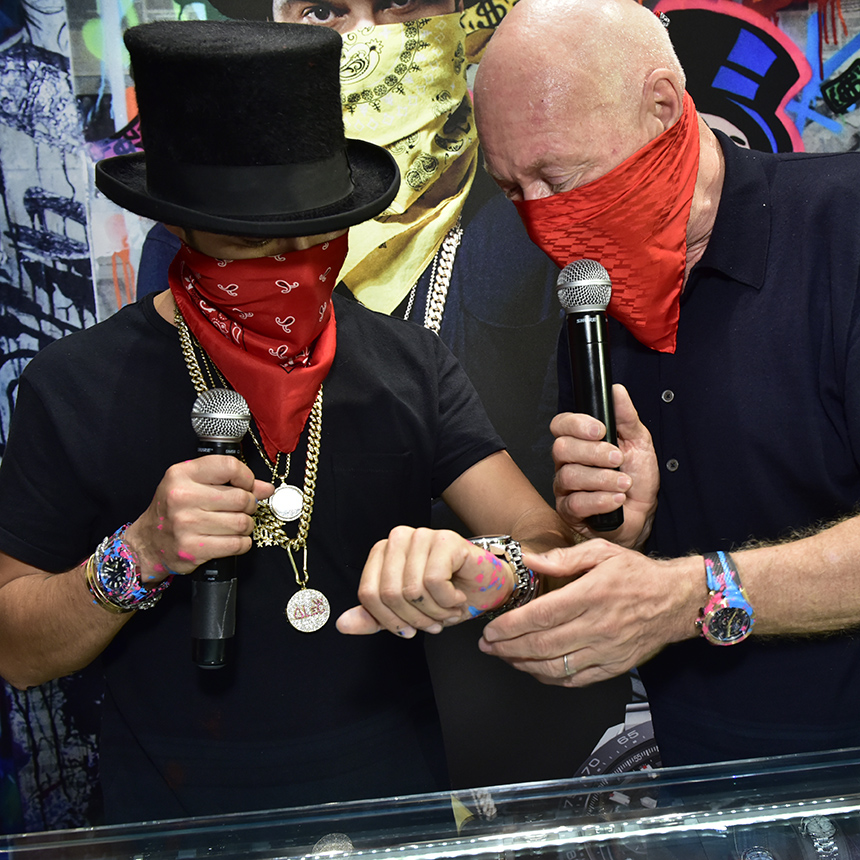 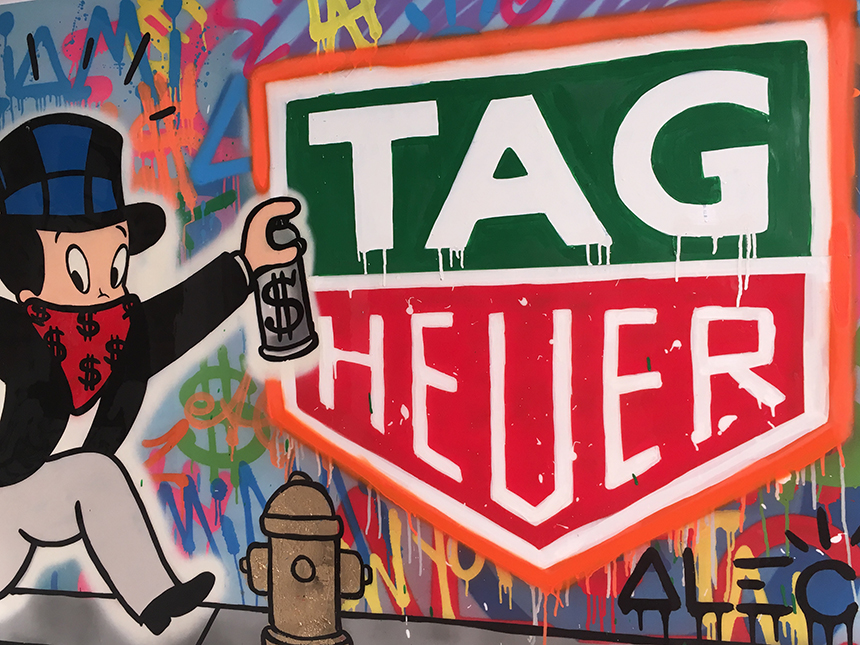 Monopoly will also attend events with the brand and host parties. And there may be a watch, but “the watch is not important,” says Jean-Claude Biver. “To design a watch collection is not the most important thing about this partnership. The most important thing is that Alec will be our art provocateur. He will bring his influence inside the company. He will infuse the culture of TAG Heuer. That is the real job. That’s more important than to make a watch.” 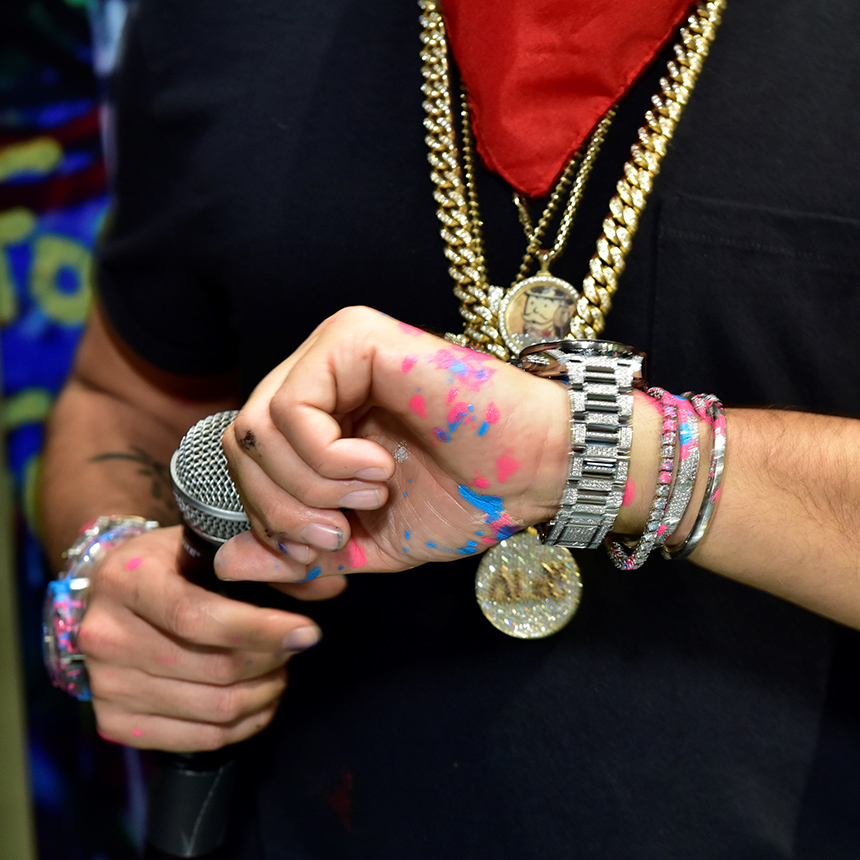 How did the 68-year-old Biver, a legendary watch executive who helped guide the industry through the quartz crisis of the 70s and now runs the successful watch division of LVMH, hook up with a millennial graffiti artist? Biver says it resulted from a conversation he had three years ago with his then 14-year-old son, Pierre. “I asked for his advice,” says Biver. “I said, how can I connect with the new generation, who are not my customers today? When they are 14 to 20 years old, and I’m 68, it’s impossible. I can connect with people my age or 10 years younger, but with the millennials, I have to learn: why do they buy the brands they do; why they spend so much money on sneakers, why do they have tattoos? So I asked my son. 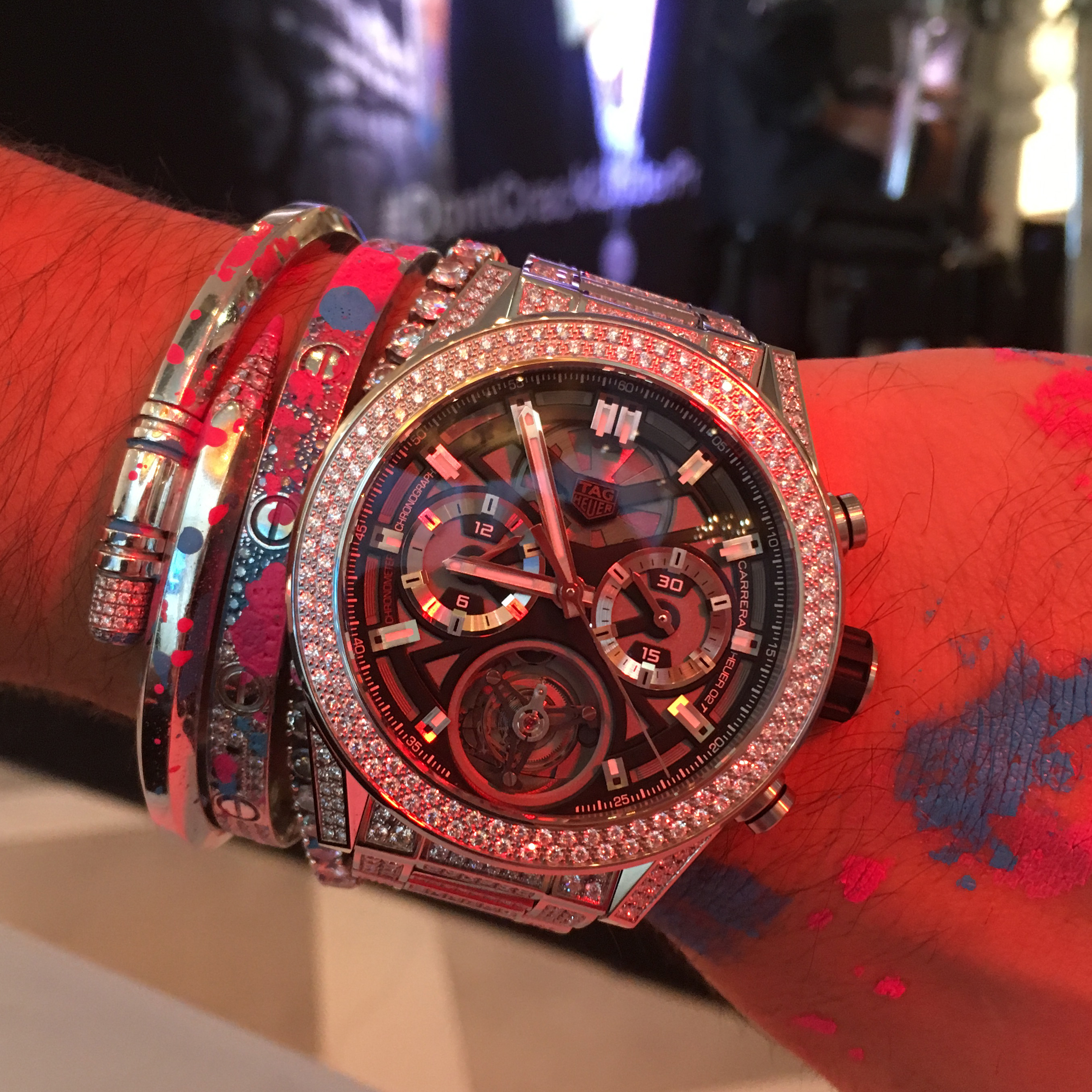 “Pierre said two things. He told me I should work with Cara Delevingne and that I should work with Alec Monopoly. Cara was, for me, not very difficult to understand because I saw some ads with her and Kate Moss for Burberry. So I got in touch with her, and we made this contract two years ago.” (Delevingne is now a TAG Heuer ambassador and appears in the brand’s ads.) “But with Alec Monopoly, I could not really find any information about him because he was not in the press, and I didn’t see him in any ads,” says Biver. His son connected him to Monopoly’s Instagram address, Biver became a follower, then a fan, and eventually approached him to buy some of his work. “The more I went on Instagram, the more I saw that he had a lot of influence on this younger generation – and I started to like his art,” he says, “I even bought a painting for my son, to thank him.” 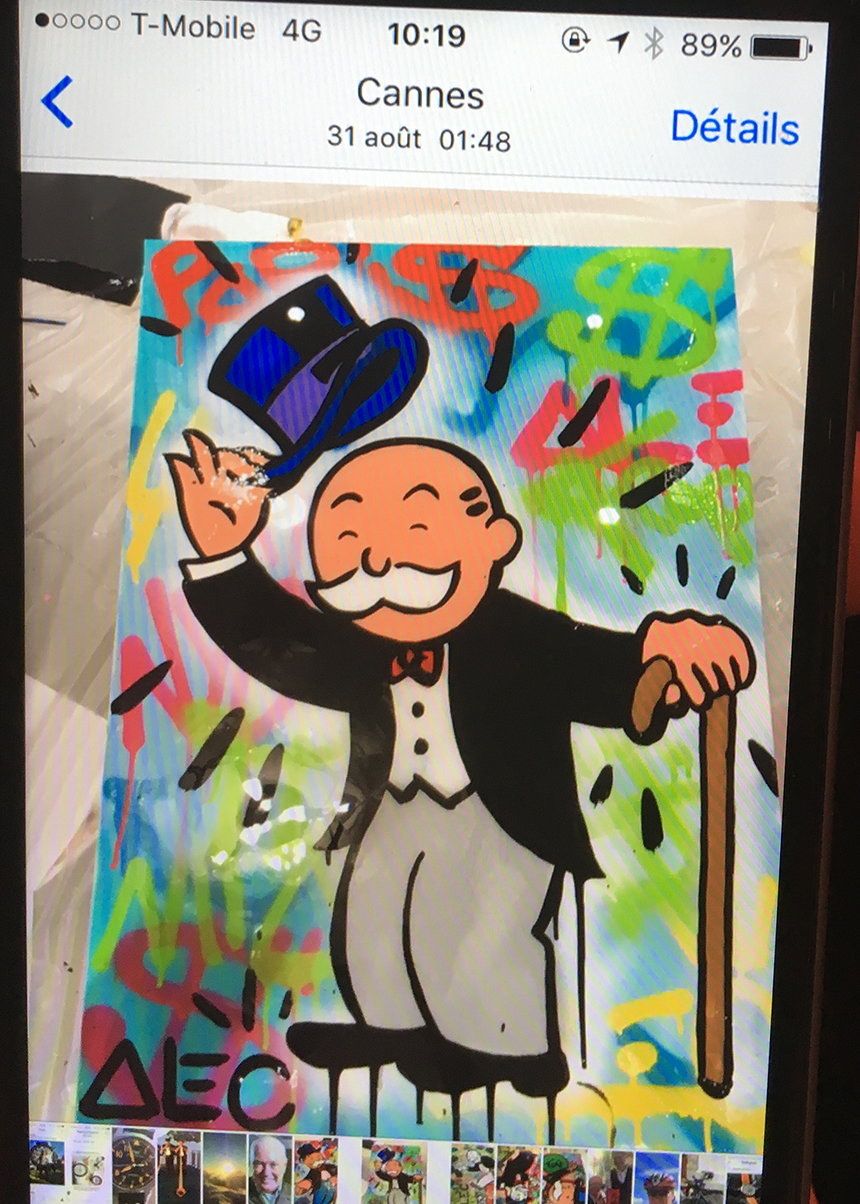 Jean-Claude Biver shows me on his phone a picture of the paintings he bought from artist Alec Monopoly.

Monopoly, whose name is an alias, is famous for wearing a bandana on his face to protect his identity. “It’s part of graffiti culture to remain anonymous so you can continue painting,” says Monopoly, who points out that “tagging is not legal.” The artist has progressed beyond graffiti to paintings, which are exhibited in galleries in New York, his hometown, as well as Miami. Last week, he unveiled a new painting – a larger-than-life depiction of Jean-Claude Biver.

Like the personalities he paints, including Jack Nicolson and, of course, Mr. Biver, Monopoly’s work is colorful. It often depicts various iconic pop culture characters real and fictional, including the tuxedoed, monocle-and-top-hatted banker character of the Monopoly game, for which the artist is most famous. “There are so many synergies between me and the TAG Heuer brand,” says the 30-year-old artist. “There is TAG Heuer and there is a graffiti tag, and the ‘Don’t Crack Under Pressure’ tag-line is very relevant to me. I’m always under pressure to finish paintings, get ready for a show. I was here until 5 a.m. prepping the canvases for this show. Also, when you’re a graffiti artist, you’re always on the lookout for the authorities. There’s so much pressure.” The artist has been caught several times, he says. When asked if he has ever been jailed, he answers, “Yes, but I can’t go into details. Anyway, now it’s all positive. People invite me to paint their buildings” – the Mondrian Hotel included. “Artists,” he says, “are the new superstars.” tagheuer.com