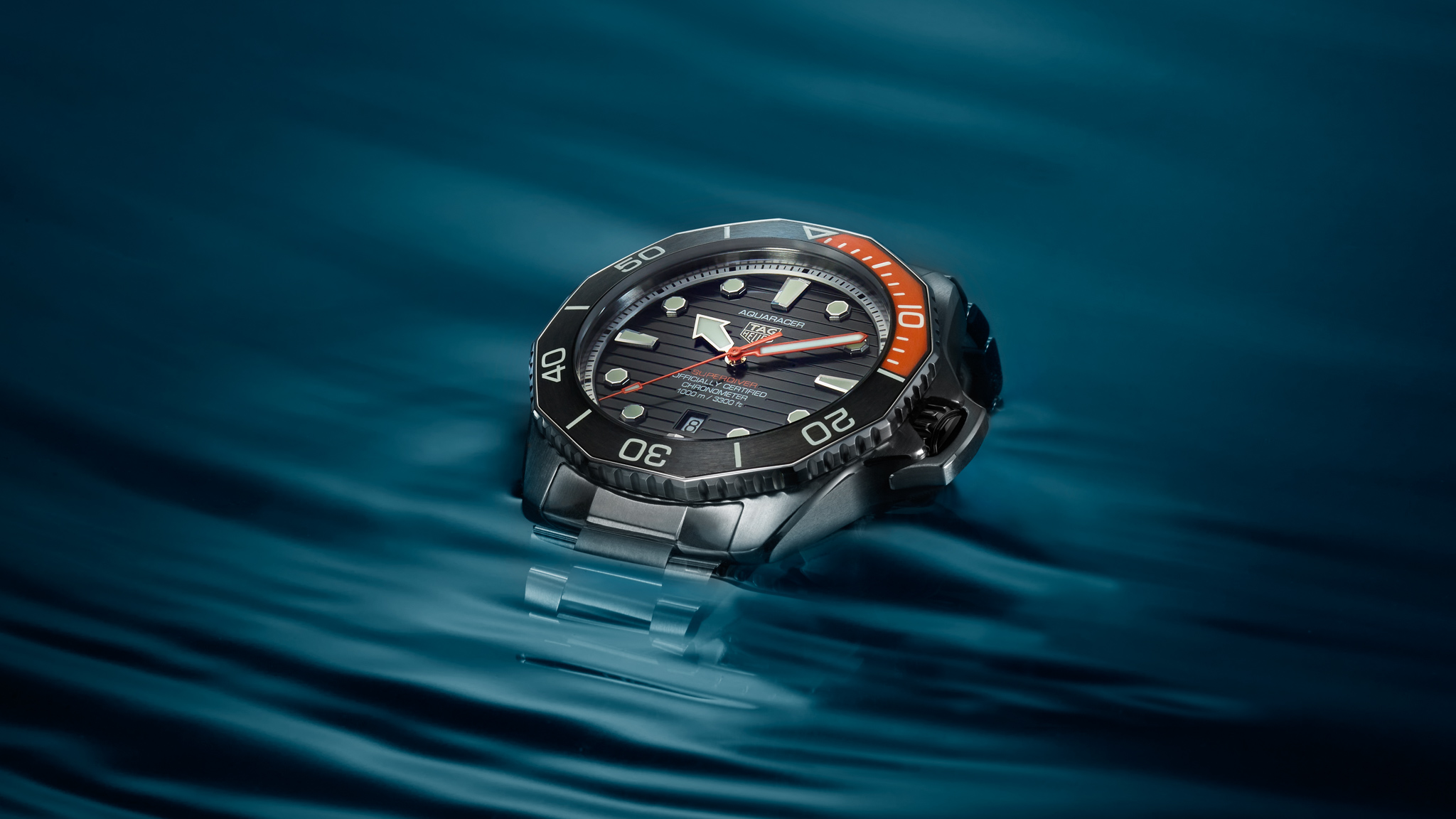 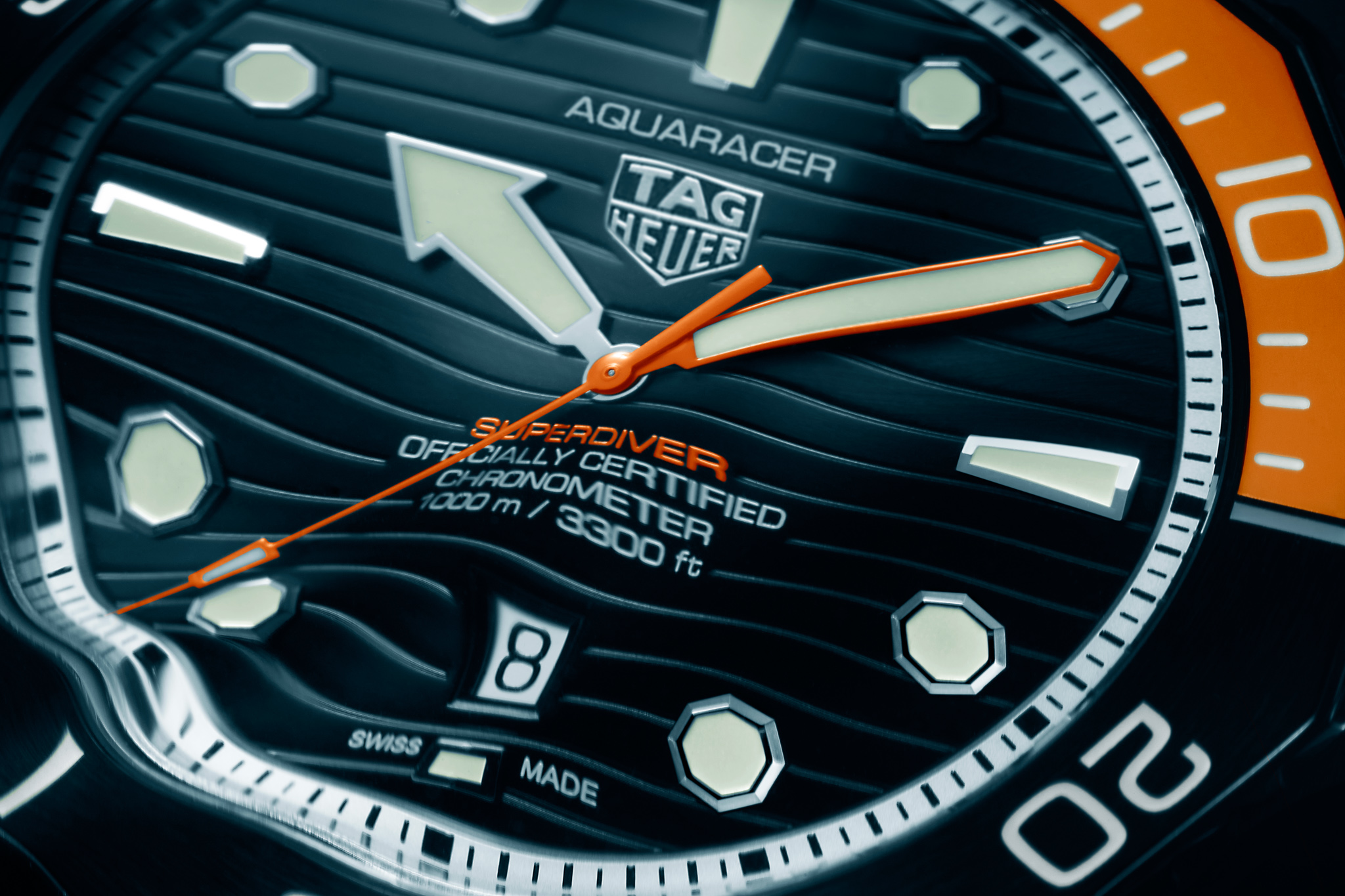 It’s certainly shaping up to be an interesting year for dive watch fans, particularly if you’ve got a penchant for big chunks of metal and practicality-defying depth resistance. The newest challenger in that title fight is TAG Heuer‘s new Aquaracer Superdiver — a 45mm sea monster hewn from Grade 5 titanium, and water-resistant to 1000 meters. Granted, it’s still a few thousand meters shy of the current record-holder, but lest the most avid desk-divers forget, a kilometer below the surface is still around 10 times deeper than even the outermost limits of recreational scuba diving, and well beyond what most folks are willing or able to descend on holiday. Perhaps most interesting about this release isn’t its distinctive Ploprof-esque crown guard design, or its thick swatches of bright “signal orange” in the hands and bezel, but the fact that this reference is powered by a COSC-certified movement manufactured by Kenissi, who you might remember as a joint manufacture partner with Tudor, Chanel, and Breitling. 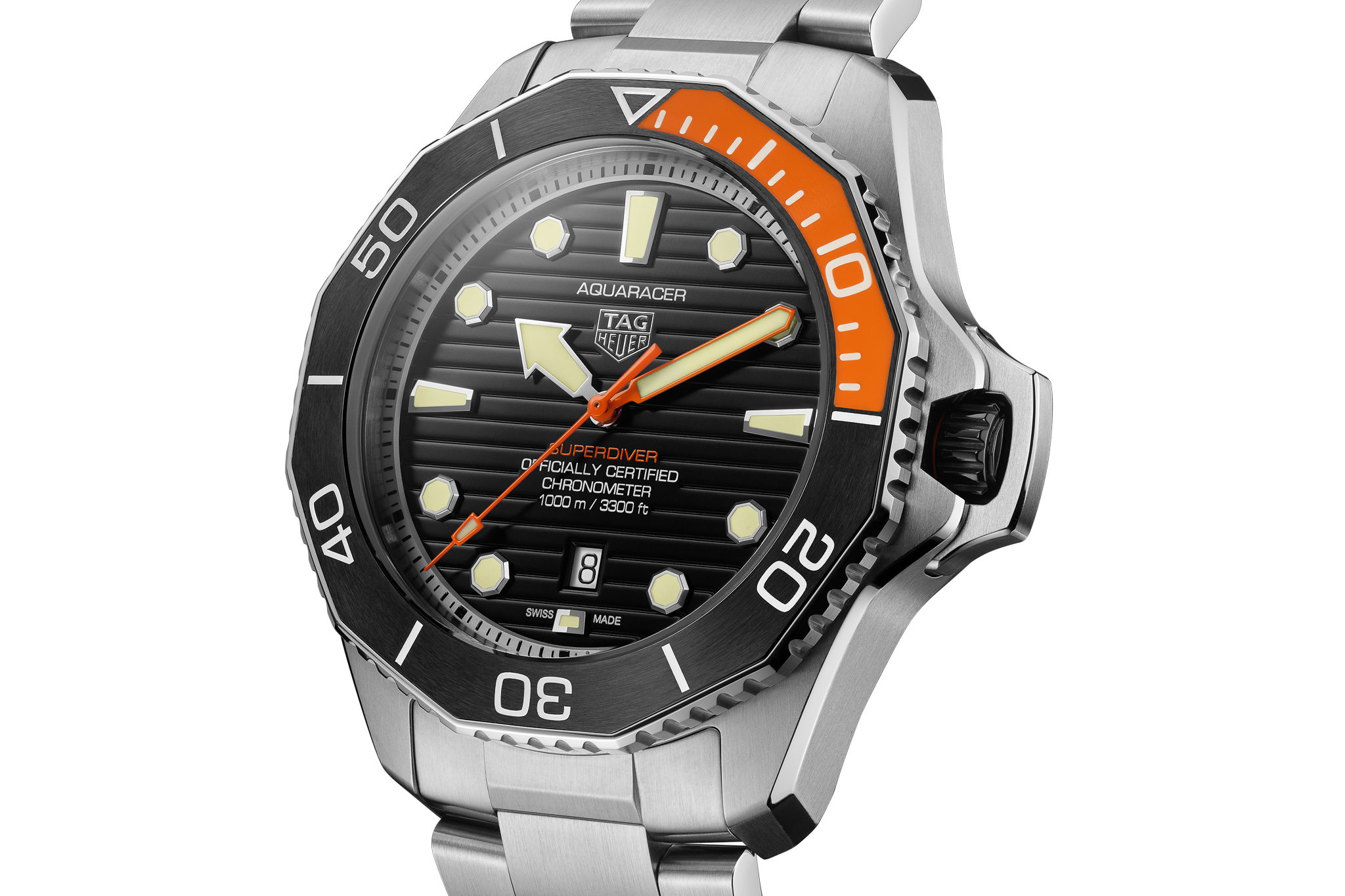 Before we get too deep into the movement, it’s worth understanding why dive watch fans should at least appreciate what the Superdiver represents. That’s because if you’ve been following the arc of TAG Heuer’s dive watch development with any interest over the course of the last three or four decades, you would have noticed an intense period of striking, capable, and highly innovative professional-grade references worthy of the brand’s own “avant-garde” promise. One reference, in particular, was 2003’s Aquagraph — a burly chronograph with a center-mounted minute display, a 24-hour register, and pushers that could be operated underwater (a relatively uncommon feat even in the era of modern dive chronographs). It represented a bridge of sorts between the brand’s utilitarian ethos and its bold new design direction. But somewhere along the way, something changed. That “bold new design direction” got a little carried away, and the Aquaracer came to be known as a kind of de-fanged tool watch, one that catered more to style than substance. 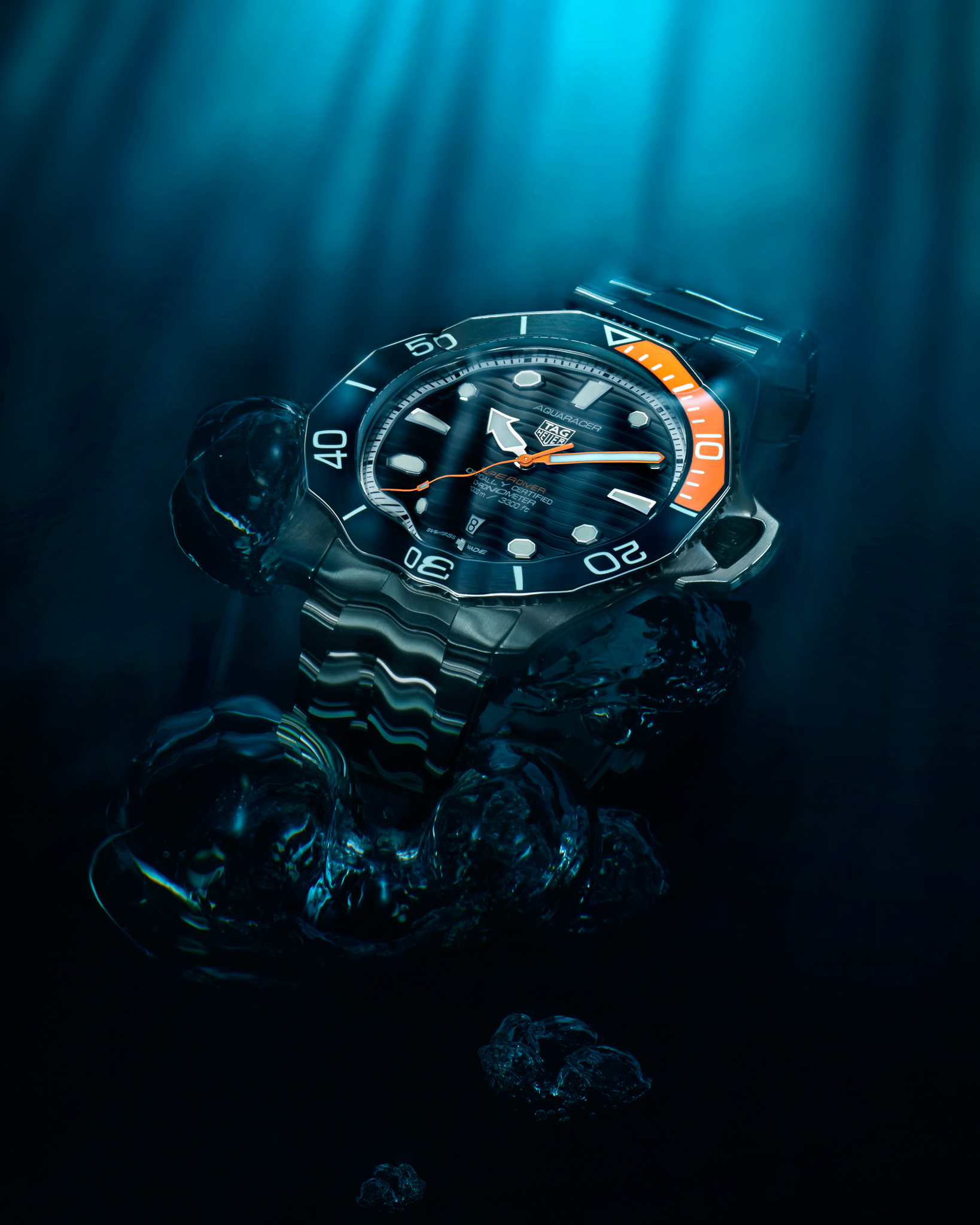 Then, in 2021, celebrating the legendary Heuer 844 diver, the Aquaracer was given a new lease on life with a honed, more cohesive new design that better reflected its original tool watch origins. Continuing, and now expanding, on that fresh arc is the Superdiver, whose admittedly silly name belies a very serious approach to its material story, as well as some cool design and engineering elements that enable a high degree of legibility and its 1000 meters of water resistance. One detail here that’s not to be overlooked is the watch’s thickness: 15.7mm, which, thick as it may sound, is actually relatively slim in the 1000-meter club (comparable Seamaster or Superocean references from Omega and Breitling, respectively are in excess of 17mm or more). 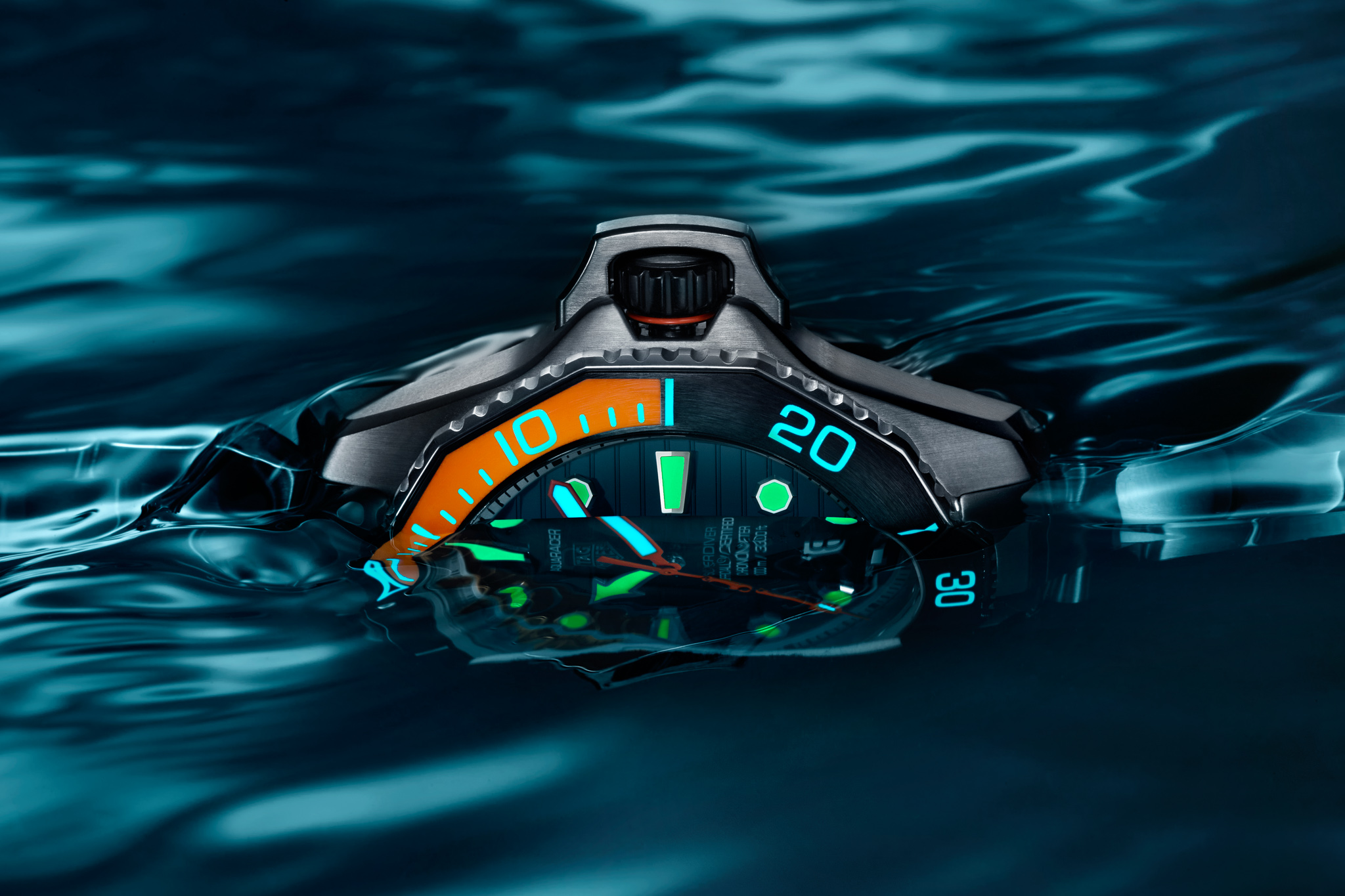 Visually, the Superdiver retains most of the key signatures of the recently refreshed Aquaracer — from the octagonal rotating bezel and hour markers (which are filled with ultra-bright Super-LumiNova X1 for maximum low-light legibility) to the “shutter” dial and beveled case band. Notably absent is the internal cyclops over the date aperture — a traditional Aquaracer signature, but one that’s been left off of what’s an otherwise relatively busy dial. But everything else here has been amplified just a bit — namely the ceramic bezel with its bright orange “composite” quarter-hour and matching hands, the latter of which now utilize oversize arrows for the hour and a long, claymore-style sword hand for the minute. The slats in the dial are also a touch farther apart, maintaining the interesting textured surface while allowing all of the elements a little more breathing room. Then there’s that new crown guard, which, yes, does look a lot like that of the Seamaster Ploprof, which also utilizes a full U-shaped guard that extends away from the case as the black DLC-coated crown is unscrewed. The Superdiver’s interpretation appears to be more neatly integrated into the caseband, though, and while we’ll have to wait to go hands-on with the Superdiver, one does have to safely assume that its operation and utility is similar. 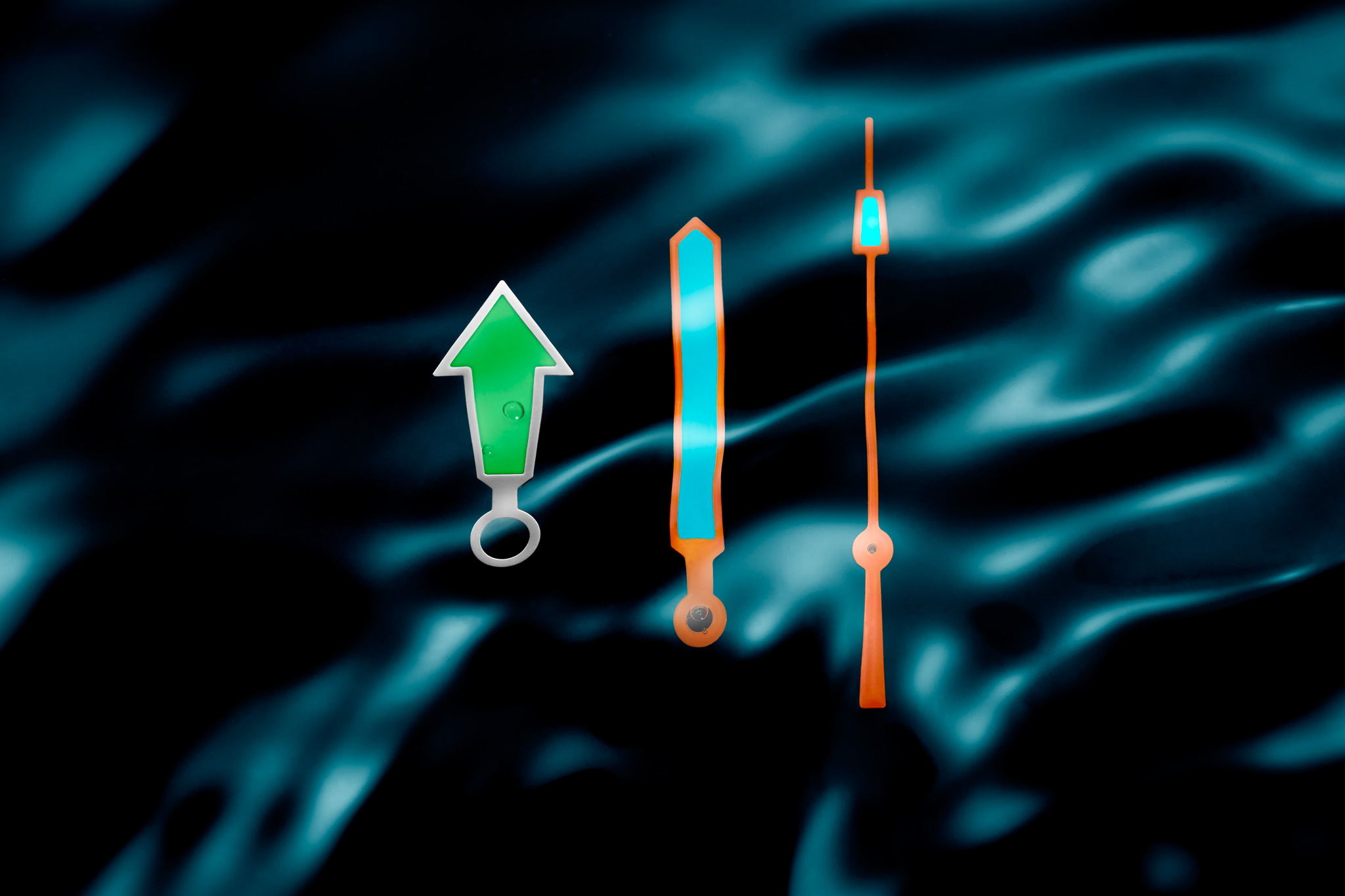 One other key design element present here that’s not on the standard Aquaracer divers is a helium release valve, located at the 9 o’clock side of the case. While much could be said about the necessity of this feature for pretty much anyone who’s not an actual professional saturation diver, its existence is essentially de rigueur for any serious dive watch. But so serious is this particular dive watch that it’s received 6425:2018 certification status, a more stringent version of the traditional ISO 6425 certification governing the durability, legibility, and reliability of watches with “Diver” on the dial. The 2018 amendment has its own set of updated requirements for anti-magnetism, as well as new provisions for modern deep-sea diving and work in helium-rich saturation diving environments, and the fact that TAG Heuer has gone to the lengths to secure this certification puts the Superdiver in pretty rare company, indeed. 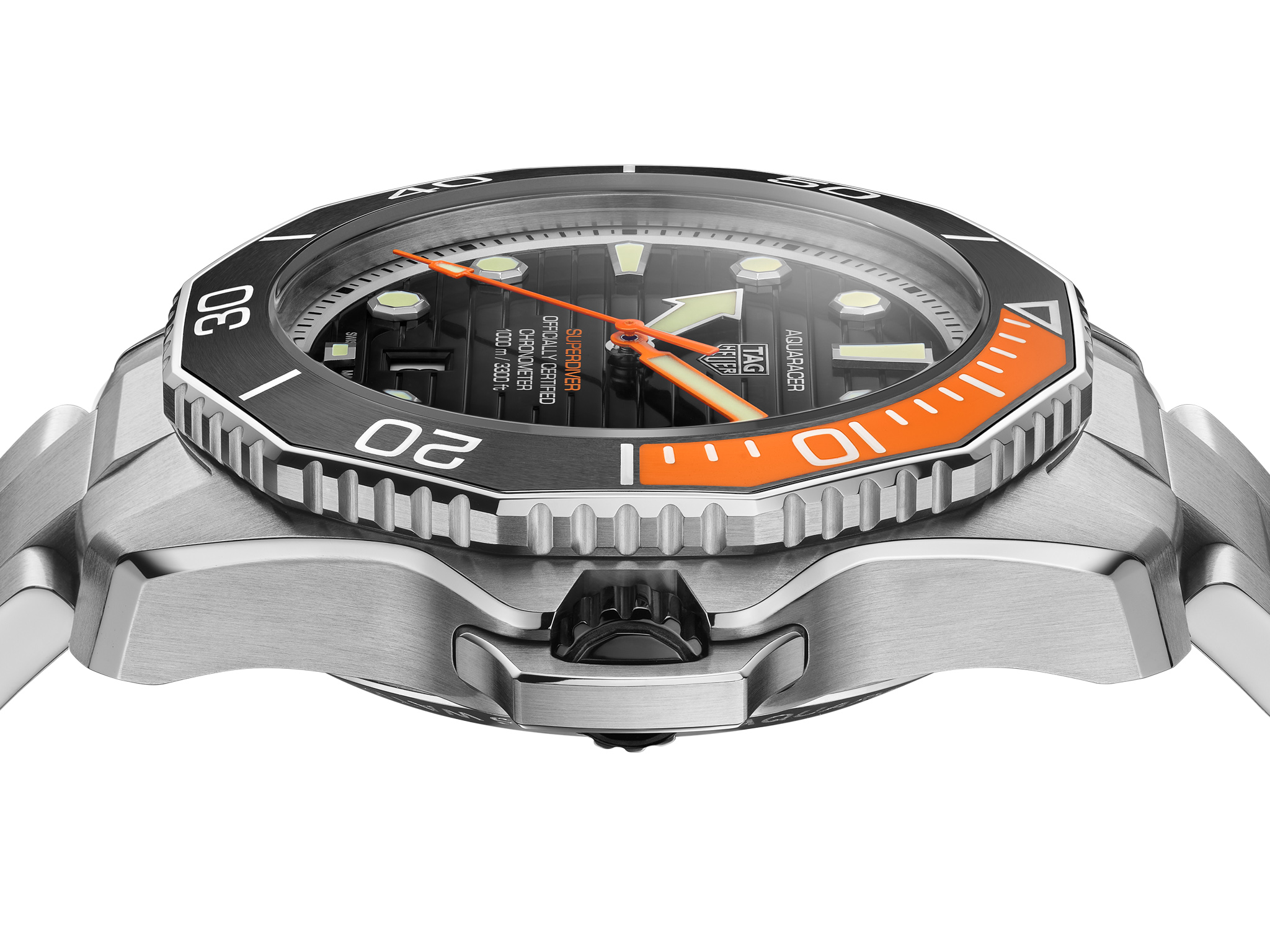 Indeed, the movement inside the SuperDiver is the TH30-00 made by Kenissi — a first for TAG Heuer. This is a COSC-certified chronometer with 70 hours of power reserve and a date aperture — by specs alone, it appears to be similar to the caliber MT5612, also manufactured by Kenissi and deployed in comparable tool watches like the Tudor Pelagos and the full range of date-equipped Heritage Black Bay references. All of this is to say this is a proven movement and a wise shift for TAG Heuer as the maker continues to creep upmarket and set its sights on some of its fellow Swiss competition. 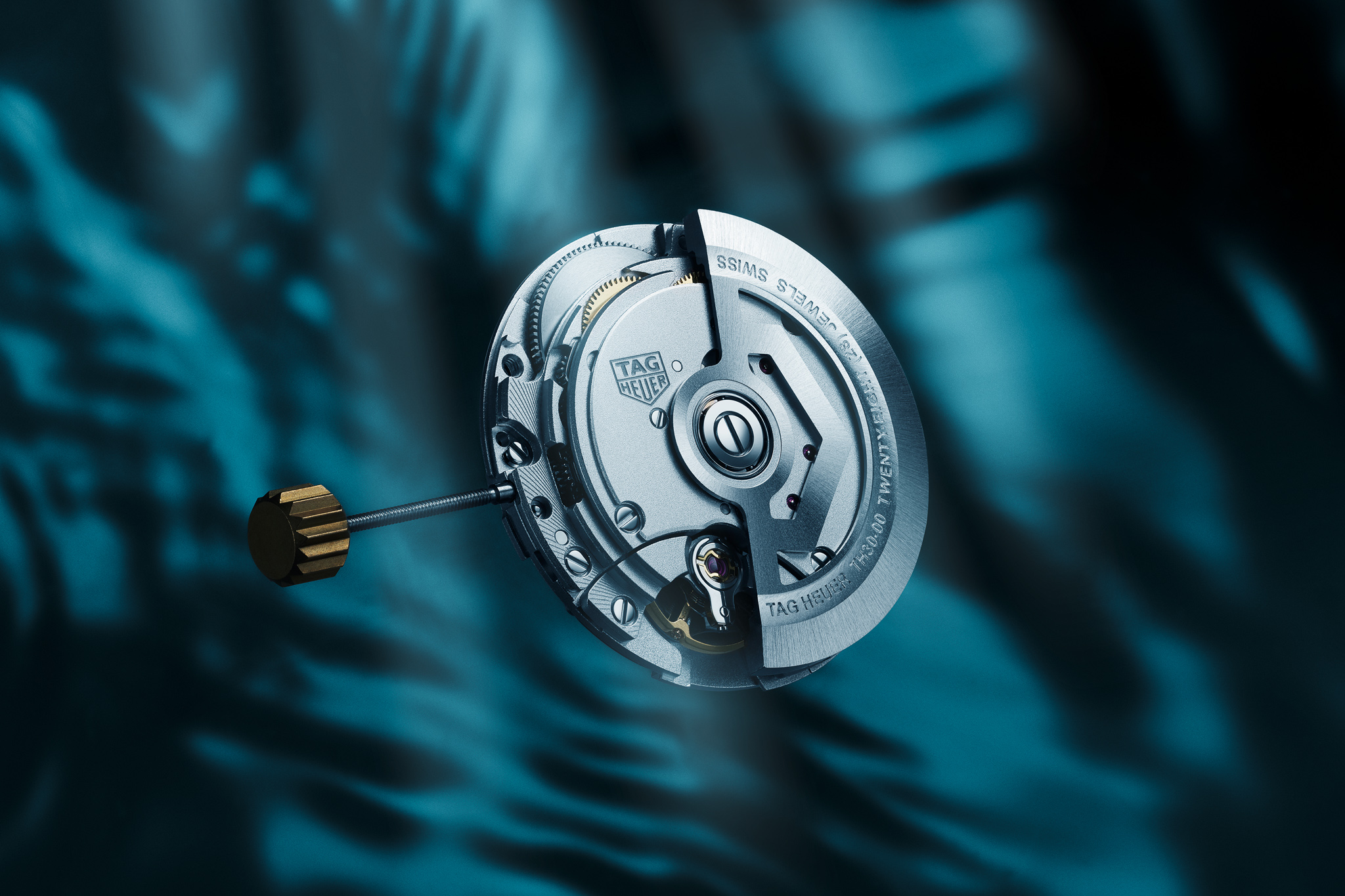 Hot on the heels of Omega’s Seamaster Planet Ocean Ultra Deep launch three weeks ago, dive watch fans hoping for an arm’s race at the bottom of the ocean this summer might just be getting their wish, as the Aquaracer SuperDiver represents not just an interesting entry in that race, but further proof that TAG Heuer is once again taking its dive watches seriously. The official price of the SuperDiver has been announced at $6,650. For more details on the full Aquaracer collection, hustle over to tagheuer.com.