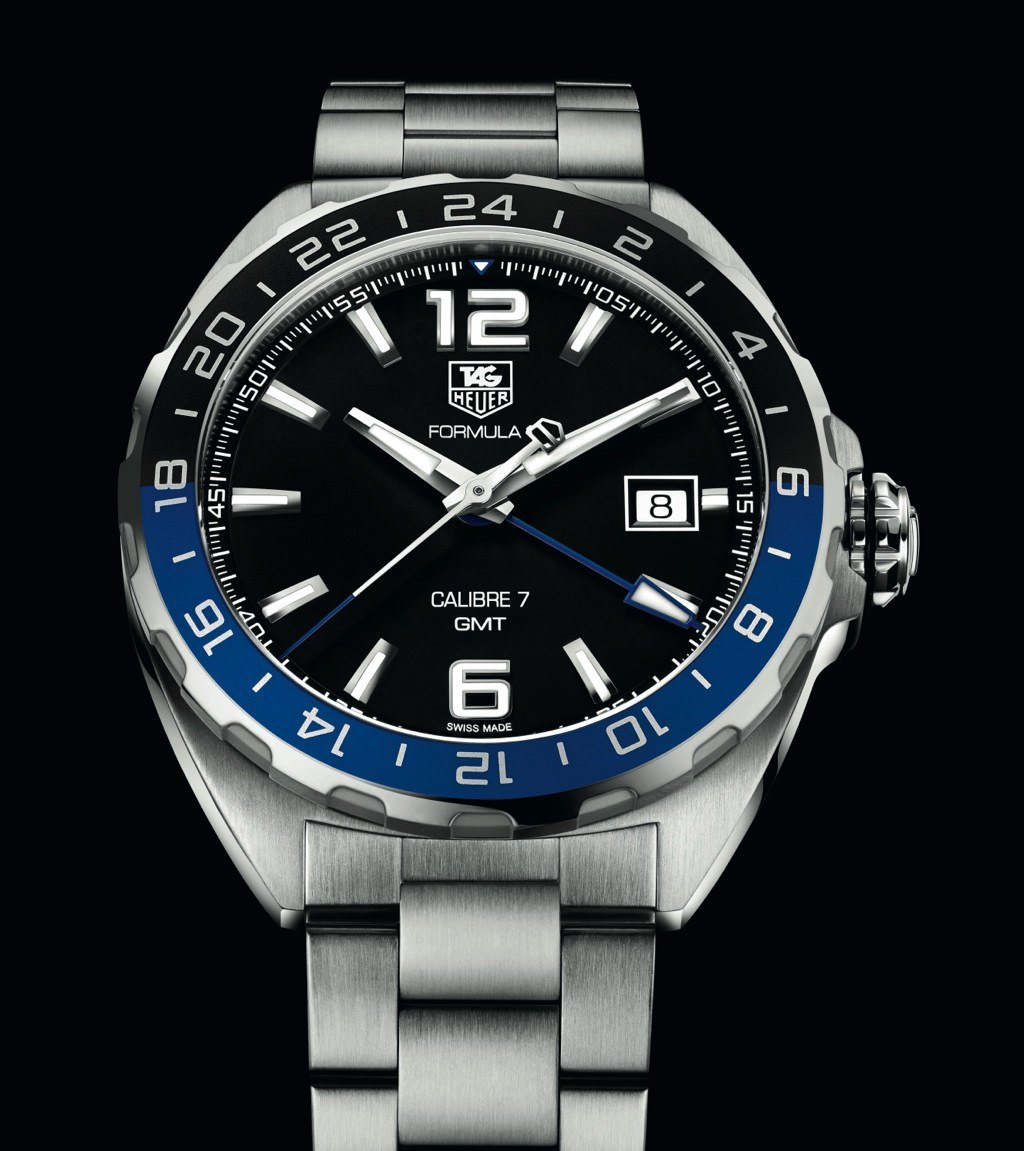 In a sense, the Formula 1 GMT lives next to the TAG Heuer Carrera Dual Time which is a dressier GMT watch that will probably be priced a bit more than the Formula 1 GMT. They each share the same movement and are both 41mm wide in size. Consumers really just need to decide whether or not they are more comfortable with a sportier timepiece or something a bit more elegant (as is the case with that particular Carrera model). Allow me to broach the obvious issue that TAG Heuer was clearly influenced by the 2013 Rolex GMT-Master II BLNR (hands-on here), with its two-tone blue and black ceramic bezel. Rolex is the subject of a lot of homaging, so I don’t think they will mind. TAG Heuer did it gracefully and retained the Formula 1 DNA, as well as that Autavia-style case that the new Formula 1 watches have. 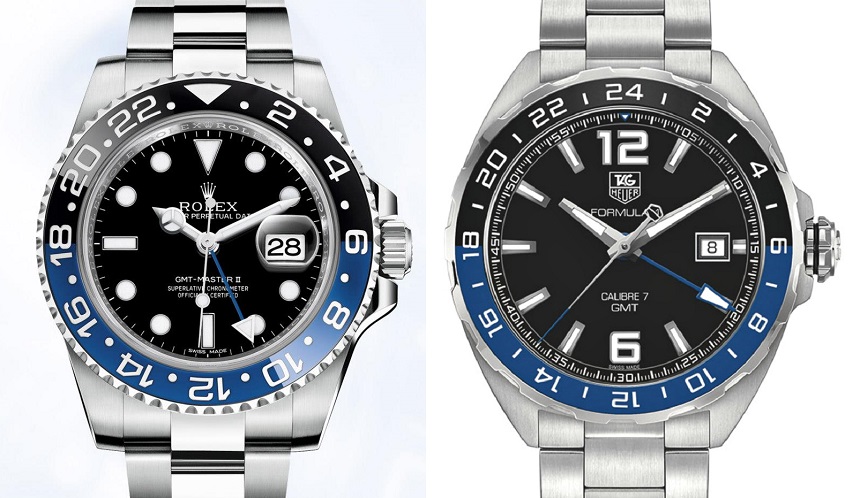 While the TAG Heuer Formula 1 GMT doesn’t have the fancy two-tone ceramic bezel as the Rolex GMT-Master II Day/Night, it does cost about $7,000 less. Let’s just say that the two watches aren’t exactly neck-in-neck competitors, but it is a good idea to know how and when watchmakers “give design compliments” to one another. The bezel of the TAG Heuer Formula 1 GMT happens to be aluminum. As mentioned above, the steel case is 41mm wide but wears large, given the tonneau-style (barrel-shaped) case. Mostly brushed, the case and bracelet have a decidedly sober and sporty theme to them.

TAG Heuer did a good job with the dial that mixes Formula 1 and TAG Heuer brand identity with legibility. The applied hour markers are painted with lume, and the hands are well-sized. Like the Rolex, the GMT hand is mostly blue and is legible, but does not overpower the dial. An interesting detail that most people will miss is the fact that the TAG Heuer brand logo is done in black and white, whereas it is often fully colored (green and red) on many (but not all) of the Formula 1 watch dials. Also note the new crown design that the GMT and chronograph versions of the new Formula 1 models have. 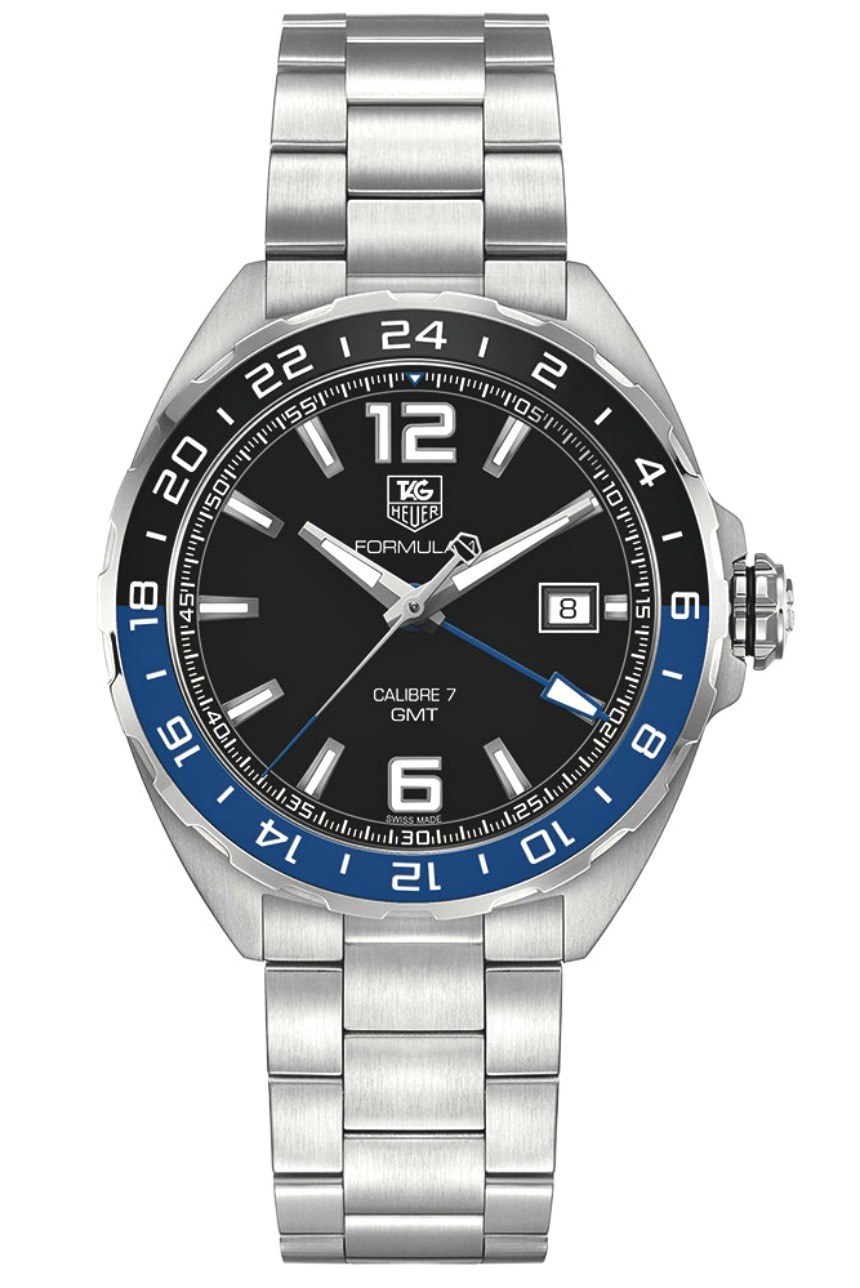 Inside of the TAG Heuer Formula 1 GMT watch is their Calibre 7 automatic movement. This GMT movement is essentially a base ETA 2893-2 automatic with a TAG Heuer custom automatic rotor. The case should be rather durable, with is 200 meters of water resistance and sapphire crystal. One important point to note is that the 24 hour scale bezel is fixed, meaning that it does not rotate. This is so that it can be properly read with the GMT hand (which does not have an independent 24 hour scale on the dial).

Once again, I want to bring up the fact that I am not sure a mechanical Formula 1 is what people should be looking for in the Formula 1 collection. TAG Heuer does offer a full set of three-hand and chronograph quartz Formula 1 models that feel as though they make a lot more sense for the collection. We further know that TAG Heuer is going to be refocusing on the slightly more affordable luxury watch market in the future, which will be part of their updated “Don’t Crack Under Pressure” brand message campaign. The TAG Heuer Formula 1 GMT WAZ211A.BA0875 watch is an attractive mechanical two-time zone watch with some nice character, and that will be enough for many. Price is $2,200, and availability is said to begin in November 2014. tagheuer.com