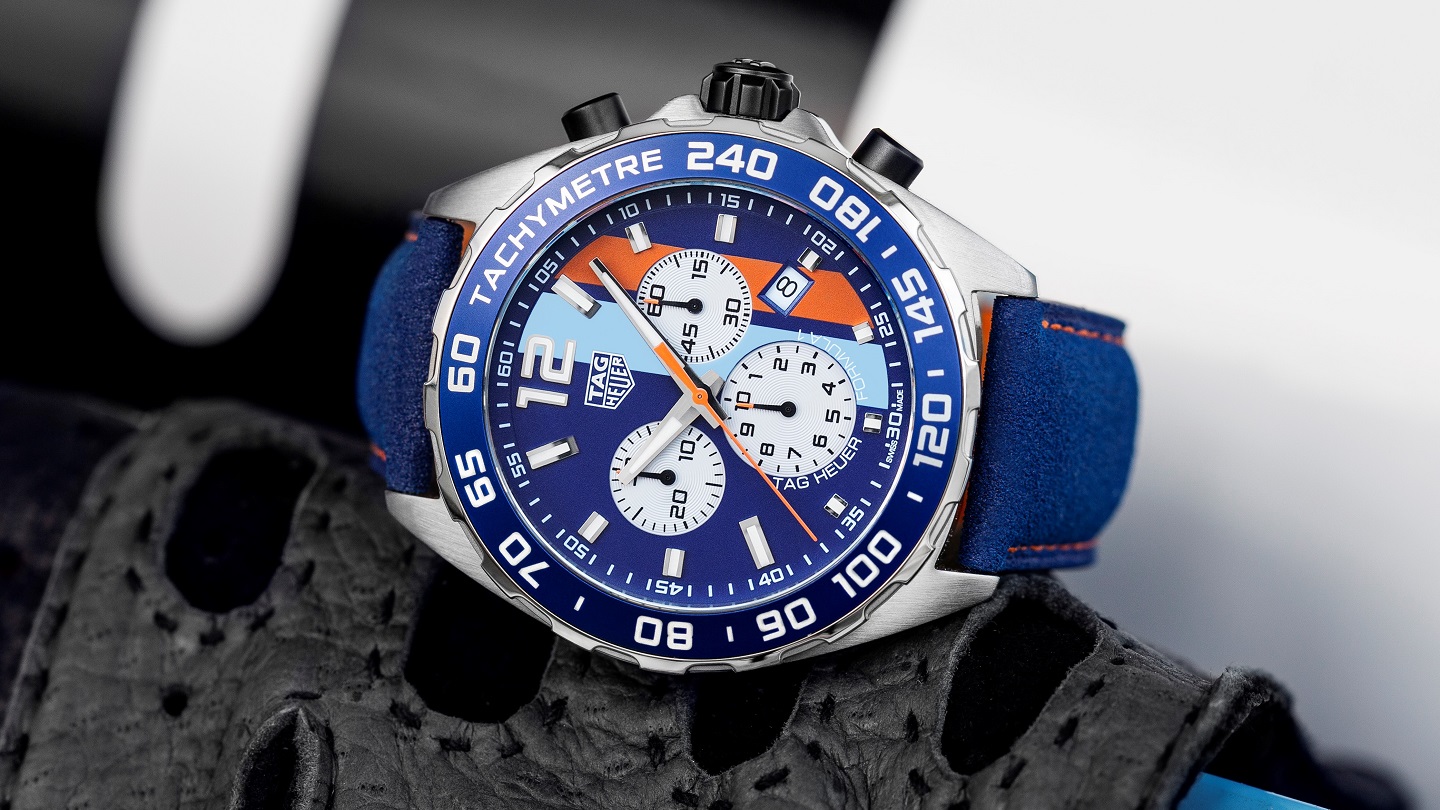 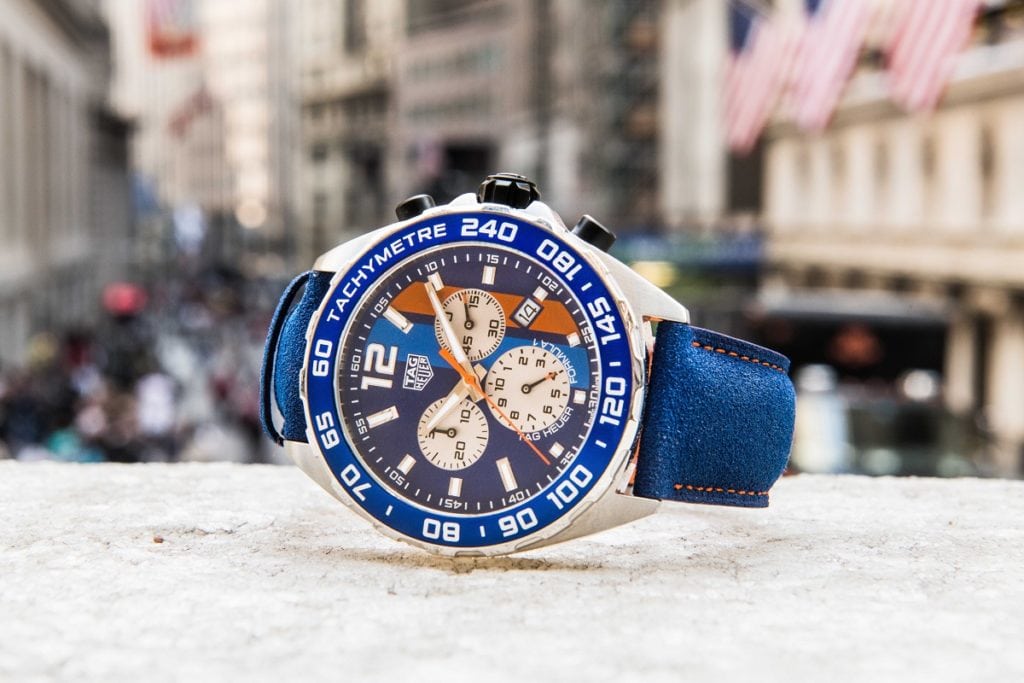 We’ve certainly seen no shortage of colorful and bold racing inspired watches this year – some more welcome than others. Continuing on that action comes TAG Heuer with the TAG Heuer Formula 1 Gulf Special Edition watch to commemorate Gulf Oil’s 1968 victory of Le Mans in France. Unveiled right before the 2018 Le Mans race, the retro-modern inspiration pulls design schemes and colors from the Ford GT 40 that won the race, and marks the 50th anniversary of the victory. And, of course, the color scheme is immediately reminiscent of their Monaco Gulf Special Edition watch, albeit at a considerably lower price point. 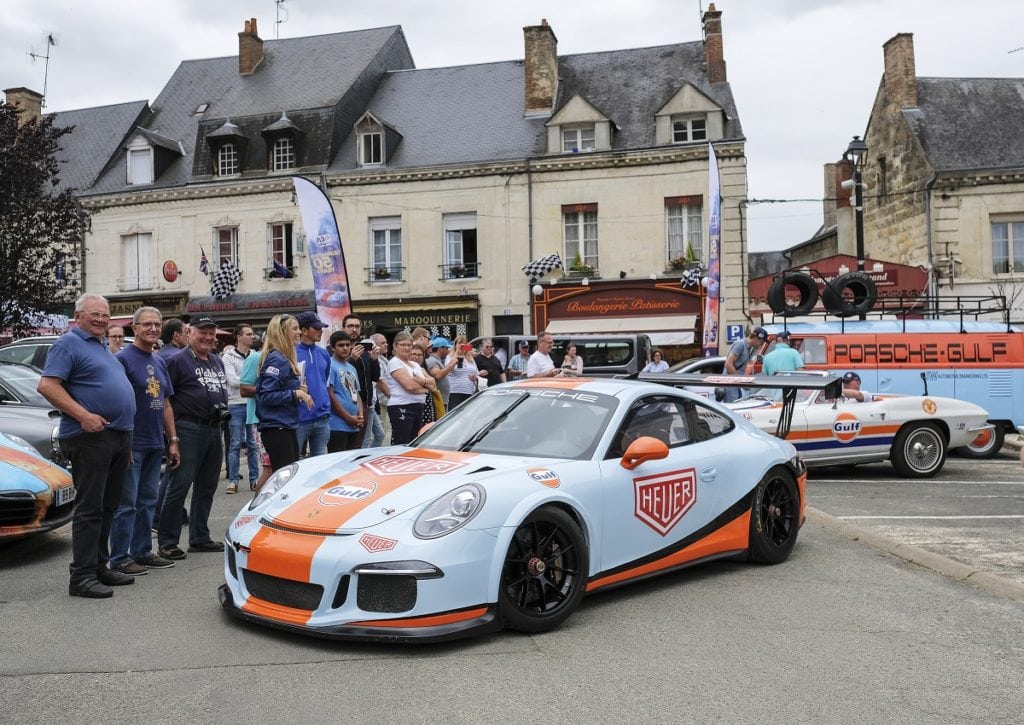 I must admit, I have a soft-spot for TAG Heuer’s Formula 1 line. The CAU1111 (Panda Dial Chronograph) was my first experience with a “Luxury watch” and to this day I’ve never found one at a price I’m willing to pull the trigger on – so I have a bit of a historical emotional connection to the Formula 1 collection. I’ve found the line ideally quirky, practical, and interesting with a unique position of being offered in a number of price points for varying options and calibers. However, the simplistic legibility and straightforward nature of the quartz powered Formula 1s of the 2010 era are still the most appealing. There was an unfortunate dip in the direction of the collection, with it really being re-vamped and nailed down in the last few years. Leaving the dizzying amount of odd partnerships aside (David Guetta, what?), the line has seen a more unified design language, and that’s helped the brand present a more coherent timepiece. 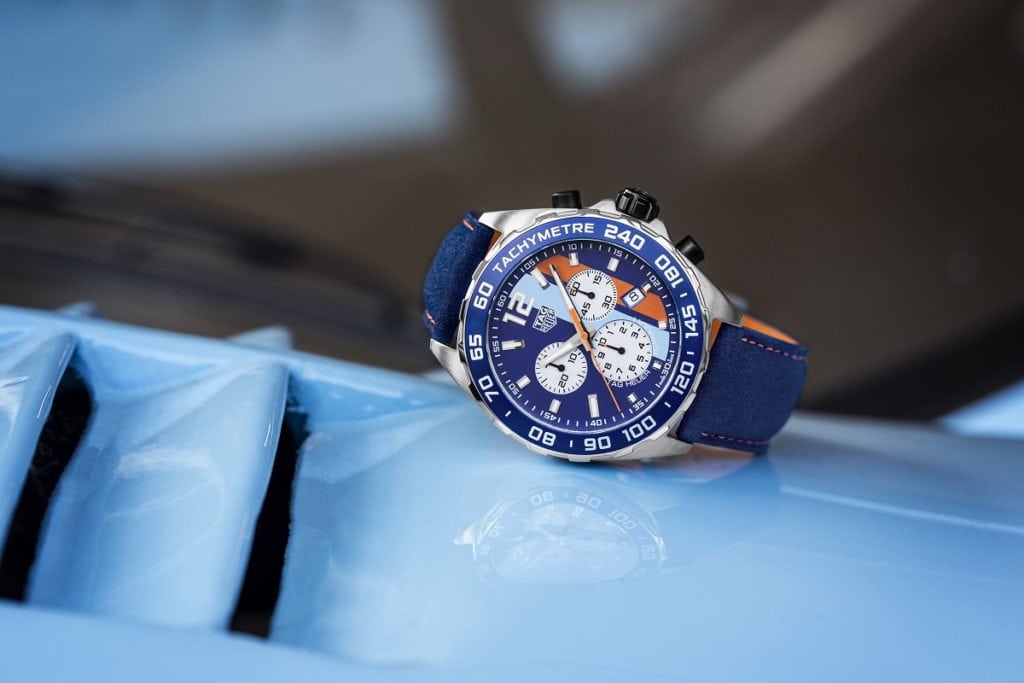 With that being said, let’s delve into the watch itself. Measuring in at 43mm, the stainless steel case has an electric blue aluminum bezel with a notched tachymeter scale. The pushers are black PVD-coated and provide a neat contrast with the black sub-register hands, though I don’t feel that these actually match the watch or the Gulf Oil design. I think if they wanted the contrast, it wouldn’t have hurt to do them in blue. The back of the watch features an engraved gulf logo. Tying the case together is a blue leather strap with orange stitching that matches the Gulf colors and draws focus to the flashiest part of the watch, the dial. 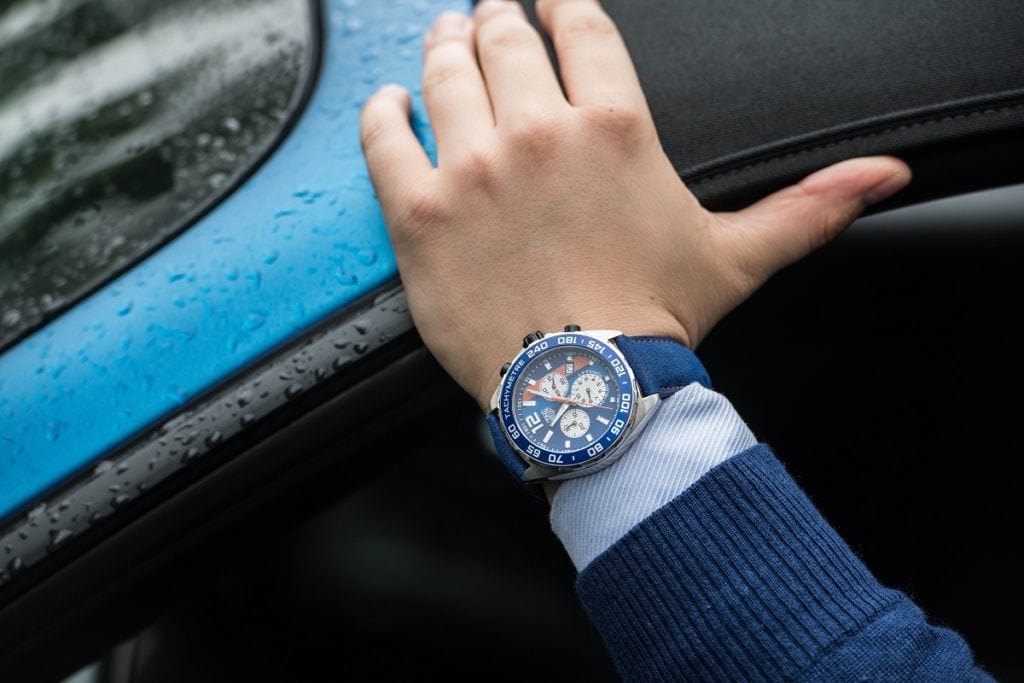 This isn’t the first Gulf Oil watch (there have been a few over the years) and most featured some form of the Gulf oil logo on the dial. This watch has a tasteful influence that pulls from previous models, but by way of color and scheme and not a blatant logo. The sunray finished blue dial has light blue and orange racing stripes on the 3 o’clock side of the watch. A date window sits at 4 o’clock, and in a unusual turn of events, I actually like it there on this design. The Super-LumiNova filled applied indices provide a nice contrast to the otherwise busy dial. Though I find some harmony in all the seemingly random dial features, I can definitely see where people will find it to be cluttered – especially when looking at the right side of the dial during times that the hands are on that side. Overall, the dial channels enough Gulf Oil influence without overdoing it. 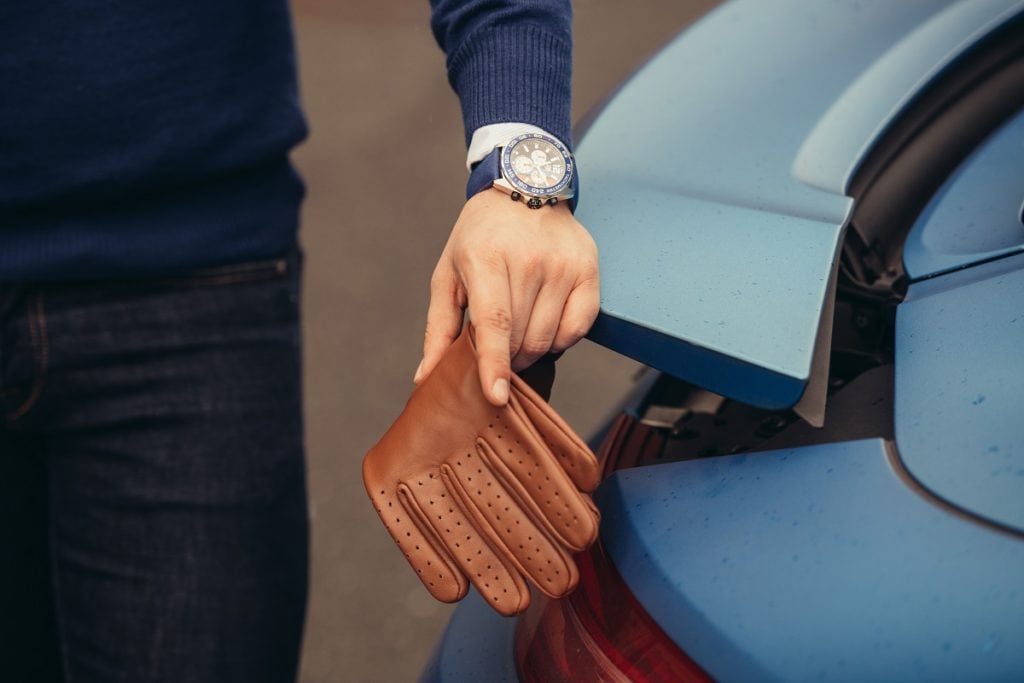 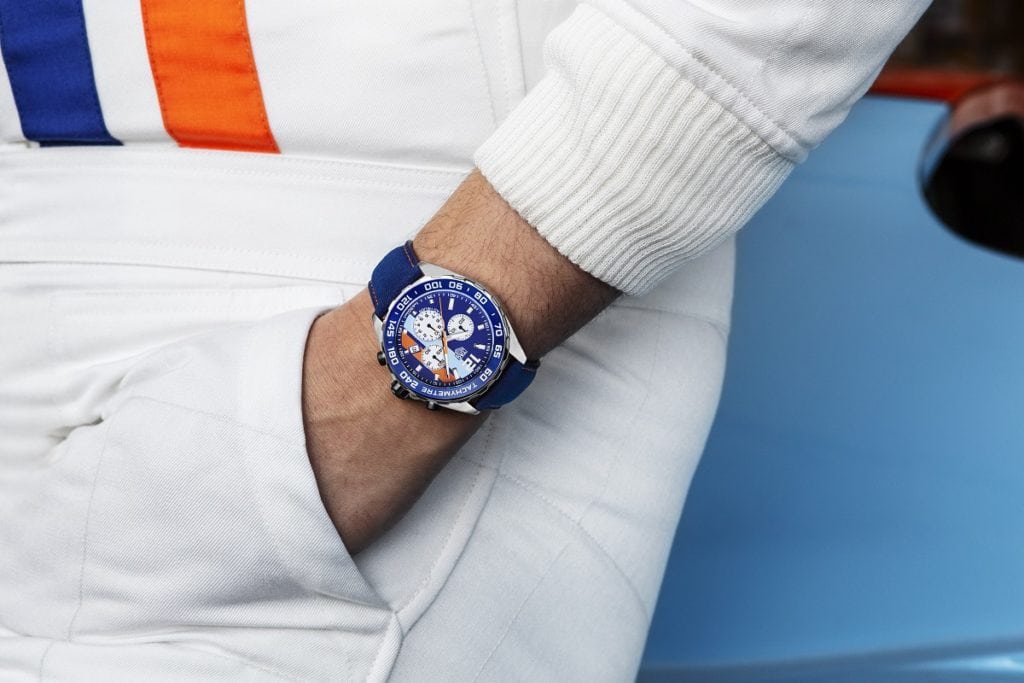 Inside the Formula 1 Gulf Special Edition is where the biggest point of contention is going to be in a watch at this price. This is, and historically has been, a collection that contains quartz chronograph movement options. The quartz movement in this watch powers a chronograph function that’s accurate to within 1/10th of a second (which is a big marketing point in their material), a small seconds, and an elapsed minutes function – so a pretty standard chronograph. The watch is water-resistant up to 200m. 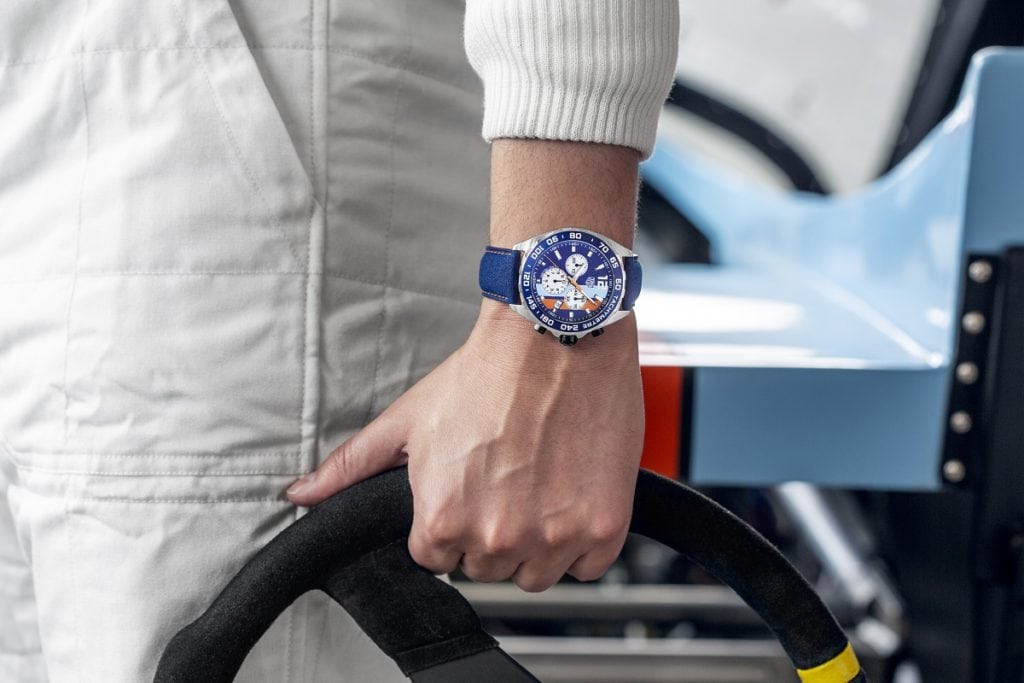 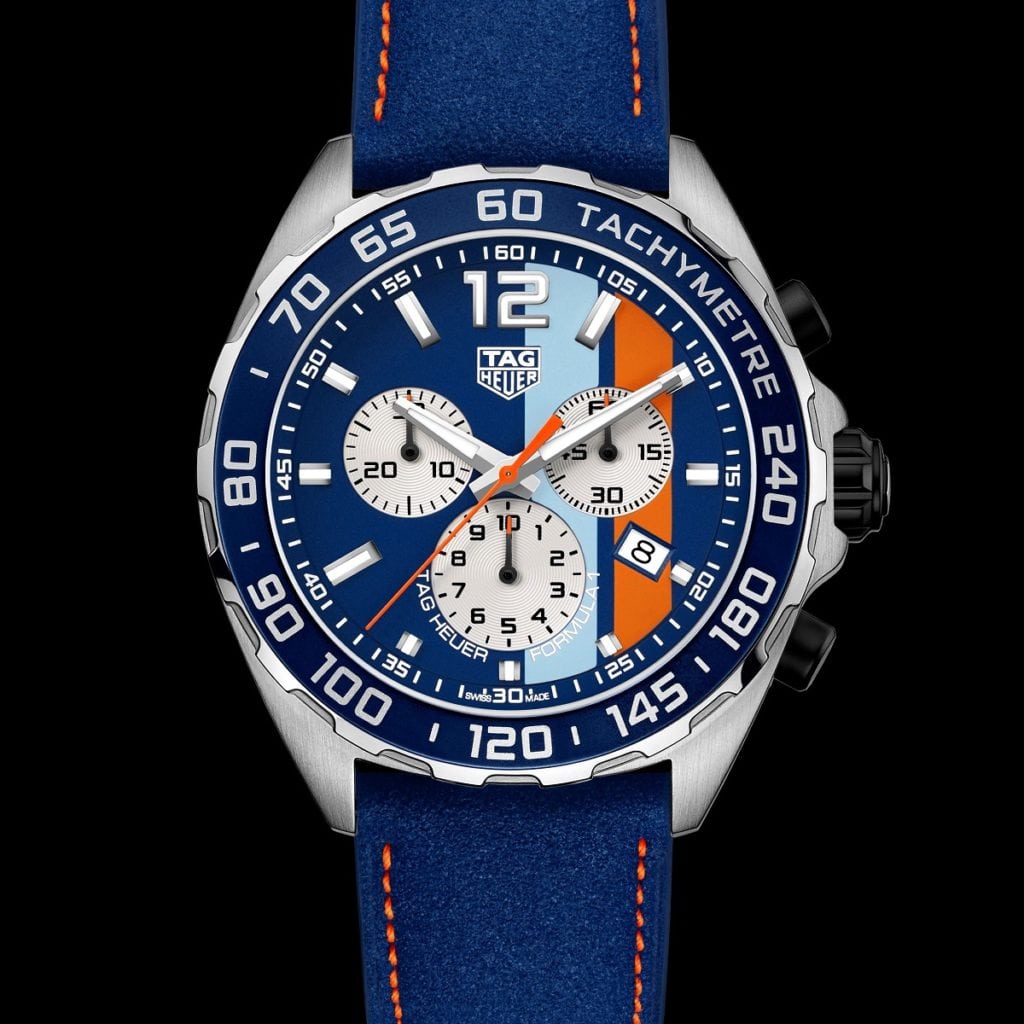 Overall, the Formula 1 Gulf Special Edition is a charming addition to the collection. The watch is equal parts quirky and functional with enough funk to be called anything but “boring.” And with the plethora of other colorful releases in the Formula 1 collection over the last couple of years, the Gulf Special Edition fits comfortably among them. I think this watch will appeal to a specific market of nostalgic collectors and race enthusiasts of a time gone by – or maybe just your average guy with a penchant for some good old-fashioned quirk.

The TAG Heuer Formula 1 Gulf Special Edition will come with a price of $1,600. It’s expensive for a quartz movement, but well within the pricing of the Formula 1 Collection over the last ten years. tagheuer.com