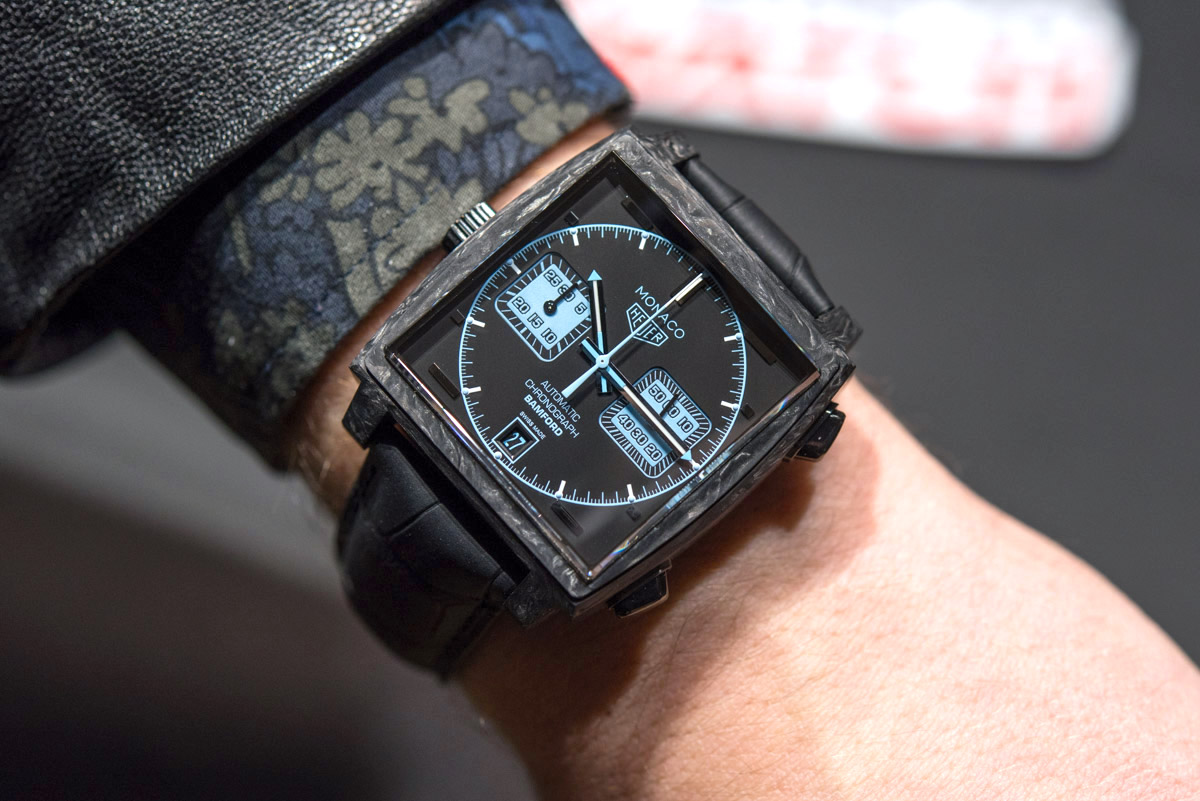 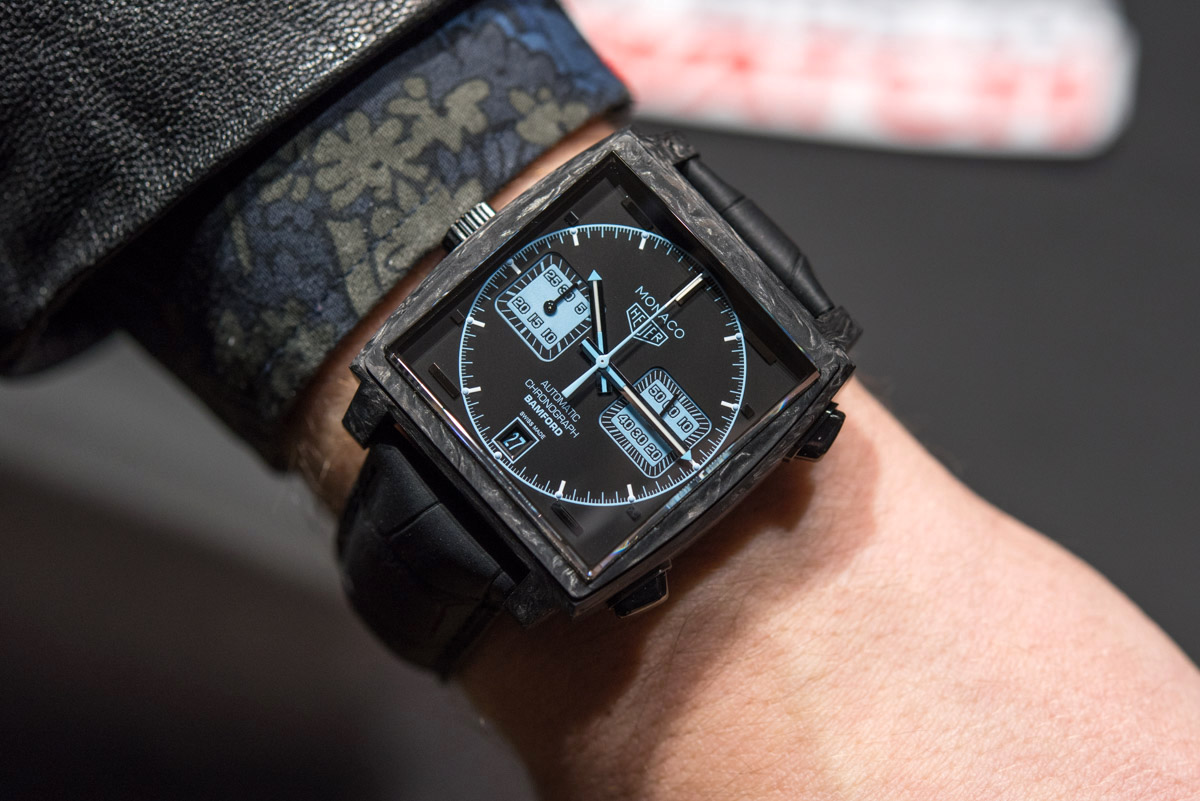 While TAG Heuer has not shied away from taking its – well-deserved – spot in the new found vintage watch craze, it has, thankfully, not neglected the fact that not everyone gets excited by or wants to obtain items people half a century ago used to like. The latest and boldest TAG Heuer, apparently thought up in deep denial of the vintage watch trend, is the TAG Heuer Monaco Chronograph Forged Carbon Bamford Edition… or whatever it is called, as TAG Heuer doesn’t identify the exact name of the product anywhere in their press release or on their website. Here’s a hands-on look at this, ehm, striking looking watch. 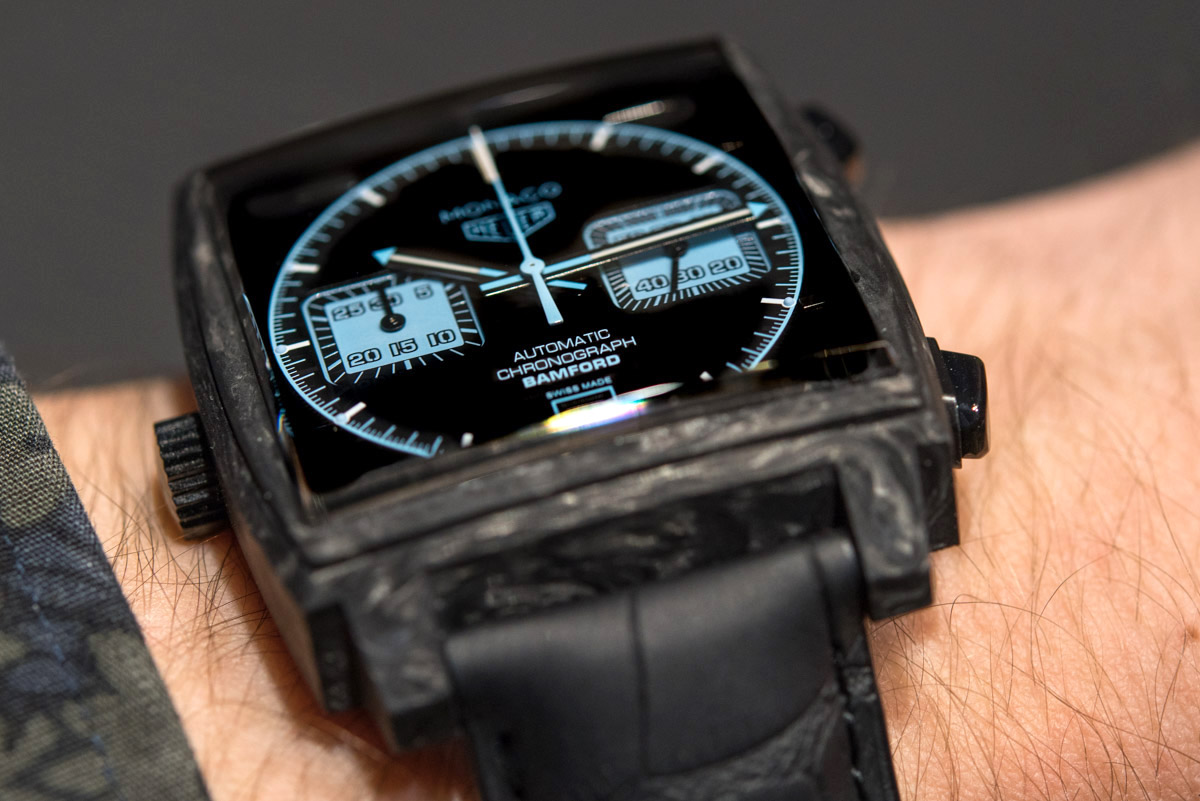 Without getting too philosophical, I think you’ll agree that most all aspects of our lives are as divided as they have not been for long – let it be politics, basic values, income, education, culture, or even watch taste. I won’t go down the route of discussing this in more detail, suffice it to say that I know there are people out there who will hate, and I do mean absolutely hate this watch with a passion – because one of the few things we have more of than division is hate, something so many have so much time and reserved energy for. Hating on it won’t make it go away, though, which I think is a good thing – and here’s why. 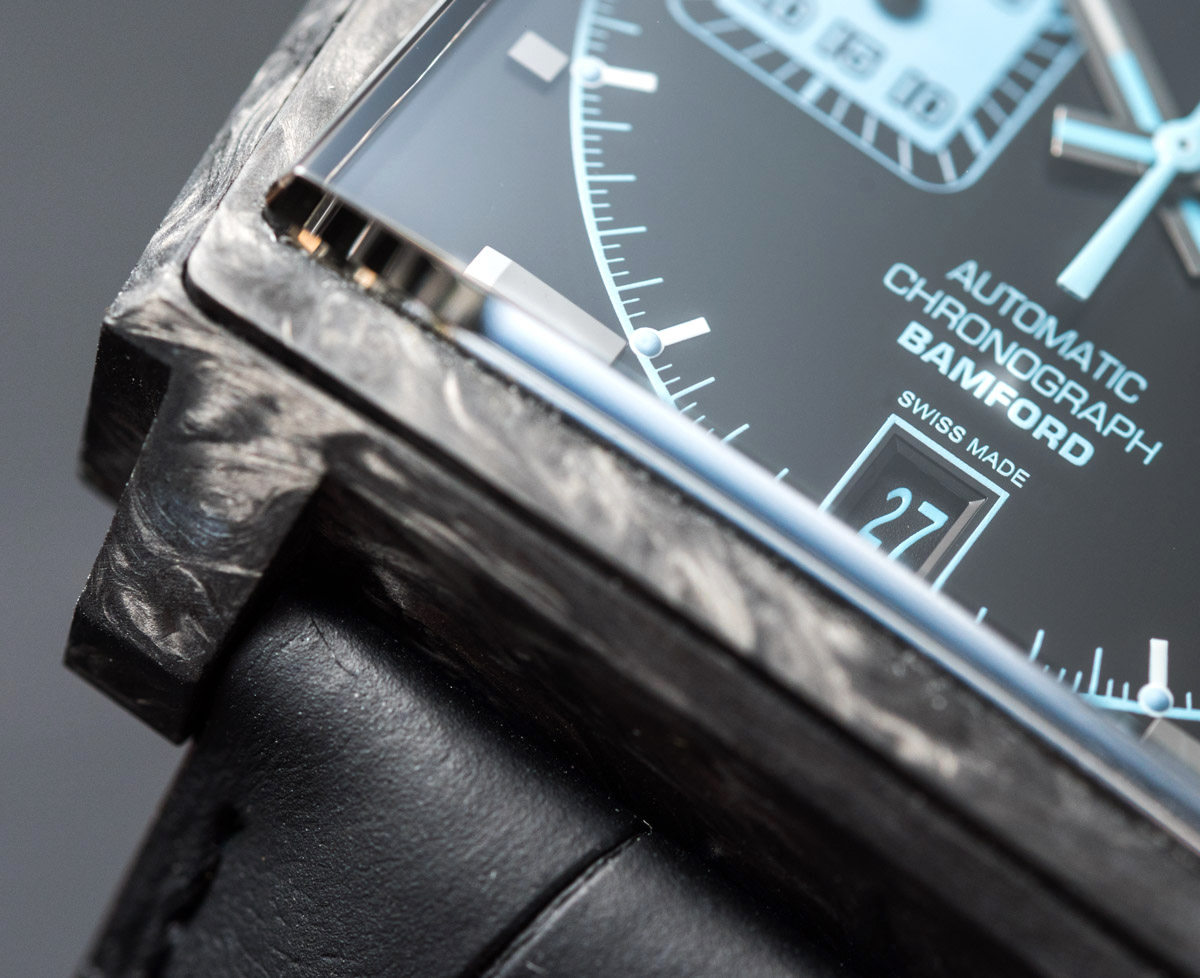 It’s either my sub-par memory again or it’s actually true, but I can’t recall a genuinely modern Monaco since the V4 – and that was far from affordable for most of us. While with its full square design and chronograph functionality the Monaco will always look more contemporary than many other watches, for long it has been absorbed in its vintage heritage – Gulf limited editions and ones mimicking the original’s look have been stealing the show lately. However, the V4 and some of the Caliber 36 models (anyone remember?) were genuinely hot-looking, modern things and – though I may well be in the minority here in WIS circles – I quite like this latest, forged carbon edition because at last it is something that makes for a modern take on this classic. 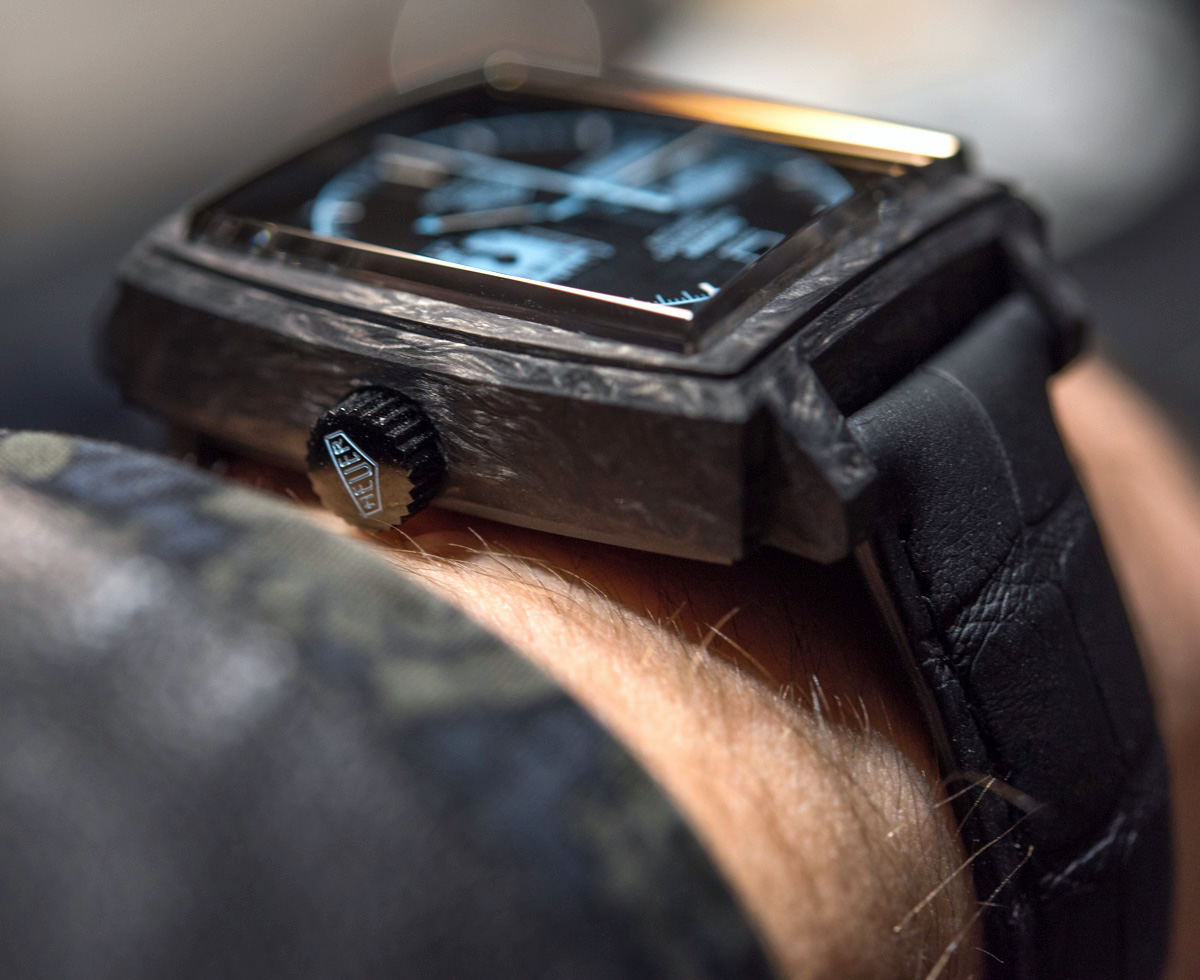 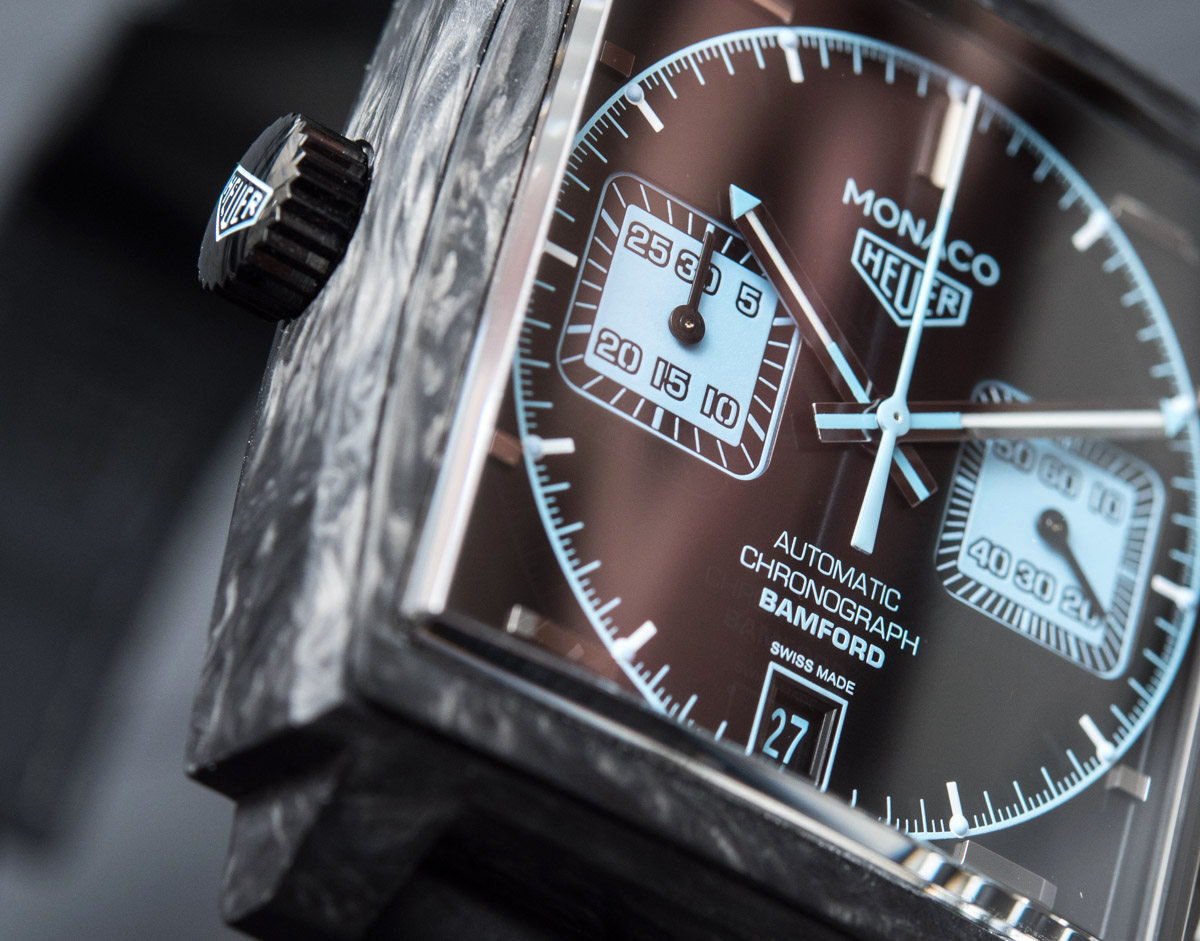 The square, albeit pre-Instagram-generation Monaco case, I think, looks fantastic in forged carbon. Its defined shape and sharp corners make for large, continuous surfaces where the random texture of its material can really be admired. Something to bear in mind, and I have tried to make the live images reflect this as much as possible, is that the material has a glossy, but not overly-shiny look to it in which the darker and brighter areas interchange in a more dull, less defined way when compared to regular carbon fiber. The transitions are smooth as forged carbon has a semi-glossy, semi-matte, murky look. You either like it or you don’t, but what can’t be argued against is the anti-allergenic material’s lightness and ability to disguise wear – it should look as new for long. 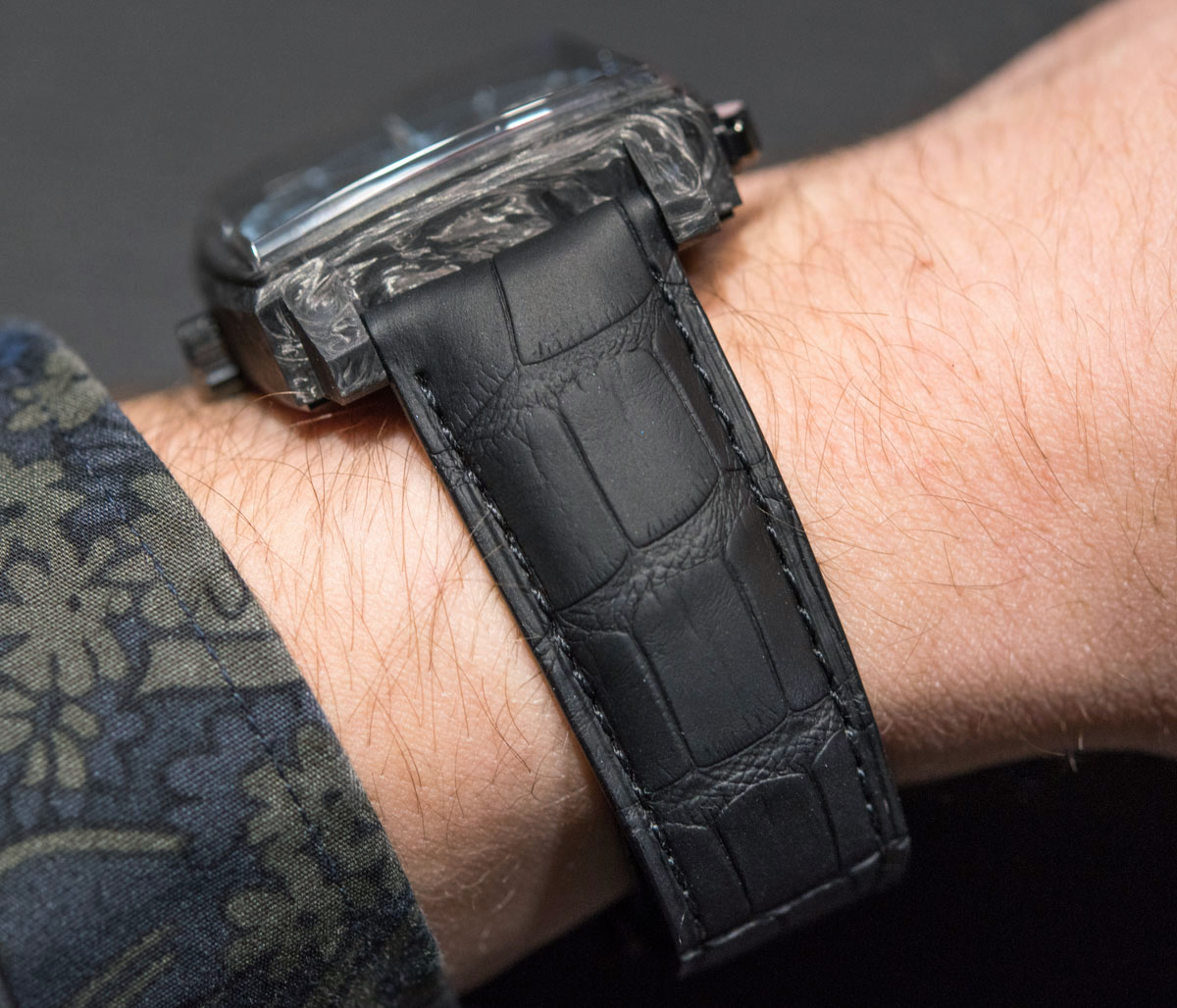 The 39mm wide case wears much larger than that figure would suggest and in that, this Bamford edition is like any other Monaco. The arrangement of the left-hand crown and right-hand pushers is in line with the traditional Monaco, while their black PVD steel choice of material is not. The forged carbon case acts like the forged carbon we have seen elsewhere – it reminded me of this, mind you, considerably less expensive Tempest Forged Carbon (reviewed here) – although I am sure it isn’t easy to carve the sharp corners and stubby lugs from this ultra-hard material. 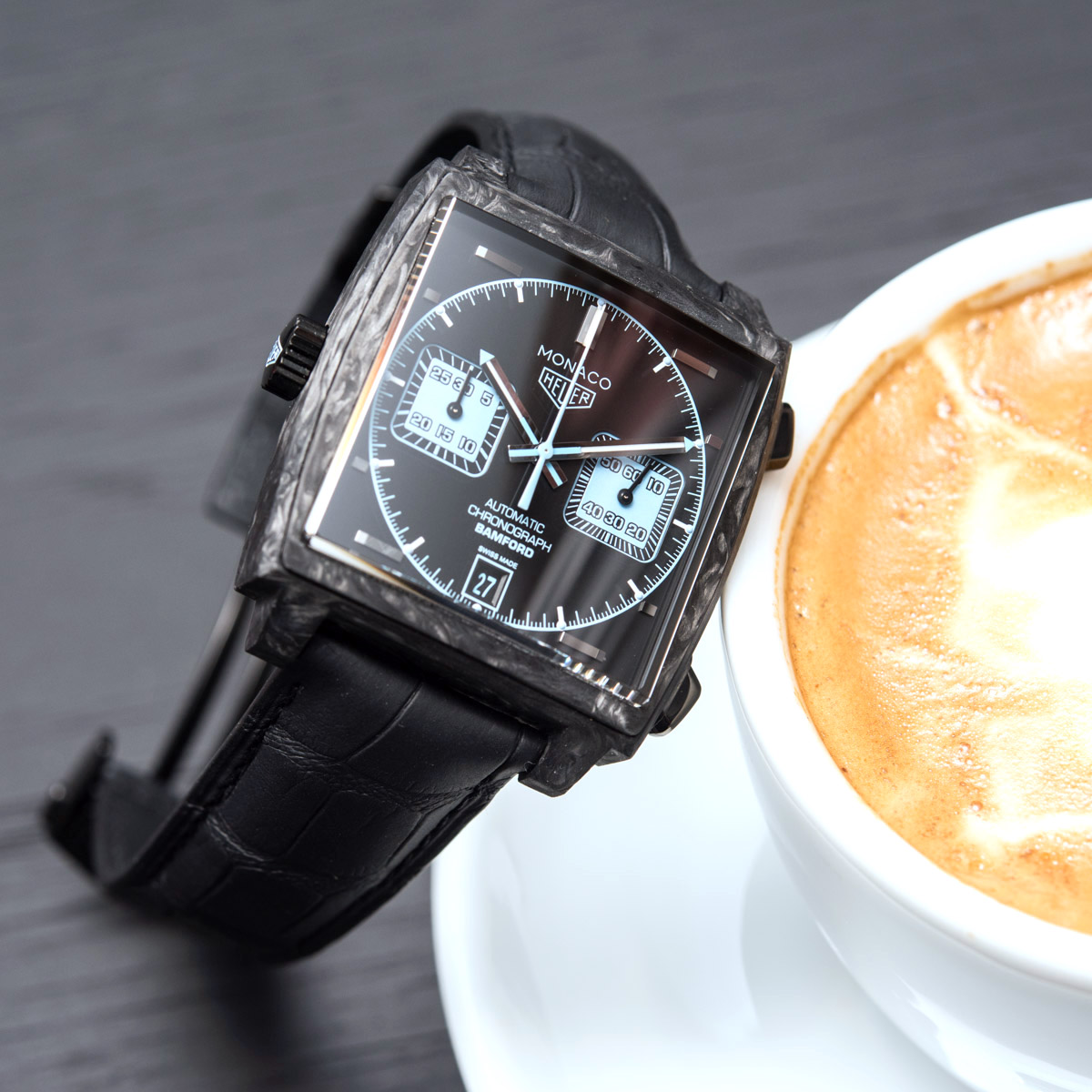 The arrangement of the horizontal indices is also close to the famed old Monaco; in sharp contrast with them stands the vibrant blue prints everywhere else on the dial and hands. The upside to this is that legibility really is quite good – there is plenty of contrast between the background and the hands and their respective tracks – while the downside is that the rather ostentatious text above the date really jumps out at you. Frankly, I could do without the Bamford text, or at least of it being in bold – the caseback already pays tribute to the man and his Bamford Watch Department operation.

Speaking of which, while TAG Heuer and Zenith have announced their partnership with BWD last year, this Monaco Forged Carbon marks the first official co-branded piece where a collaborative watch is distributed by TAG Heuer boutiques and e-commerce, in select countries. Beyond this distribution, I am not sure what other distinction there is to be aware of – calling this the first may just be a marketing spin on what is an already ongoing partnership. Anyhow, those who buy one of the 500 numbered pieces will consider this factor last in their decision. 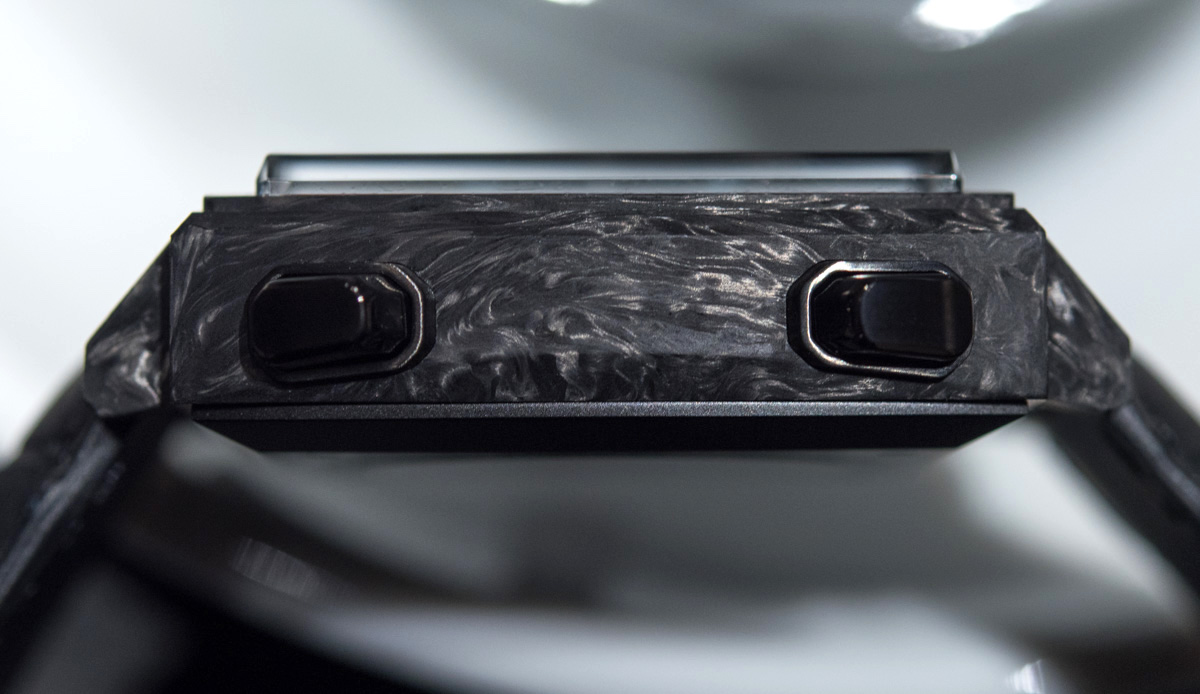 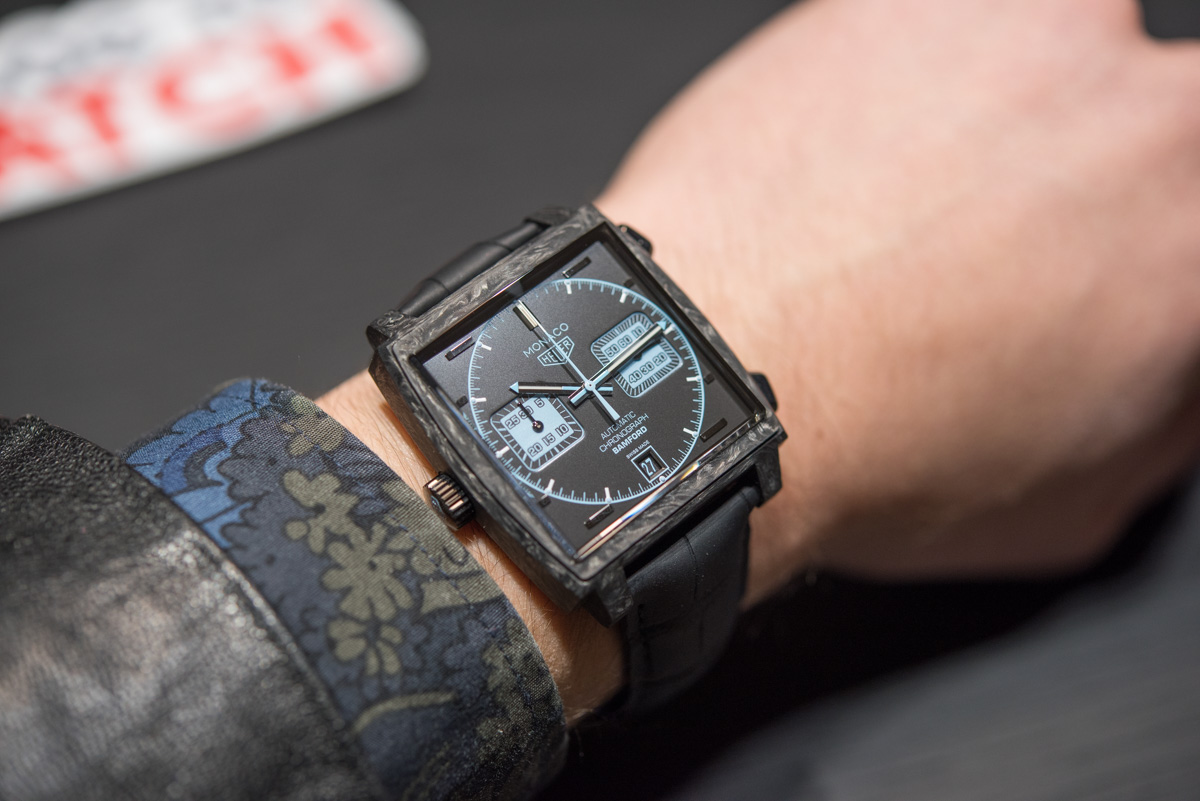 Around the wrist, as I said, the chunky Monaco case wears more like a 42, perhaps even 43mm case as it takes up considerable real estate, while the thickness of the case – courtesy of the Calibre 11 movement and the box crystal – further adds to the perceived heft; even if this Monaco Chronograph Forged Carbon isn’t heavy at all. Speaking of the movement, the Calibre 11 is a base Sellita SW-300 with a Dubois-Depraz chronograph module on top. Frequency is a modern 4Hz while power reserve is a low 40 hours. 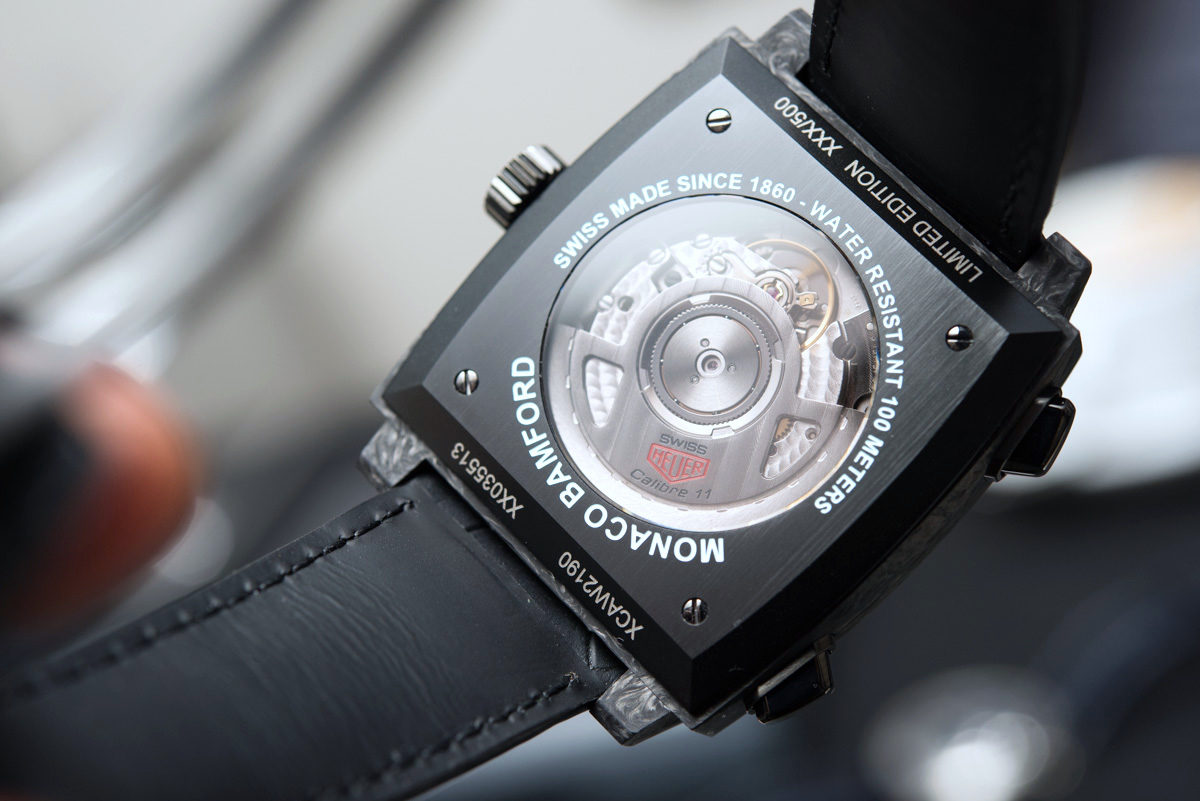 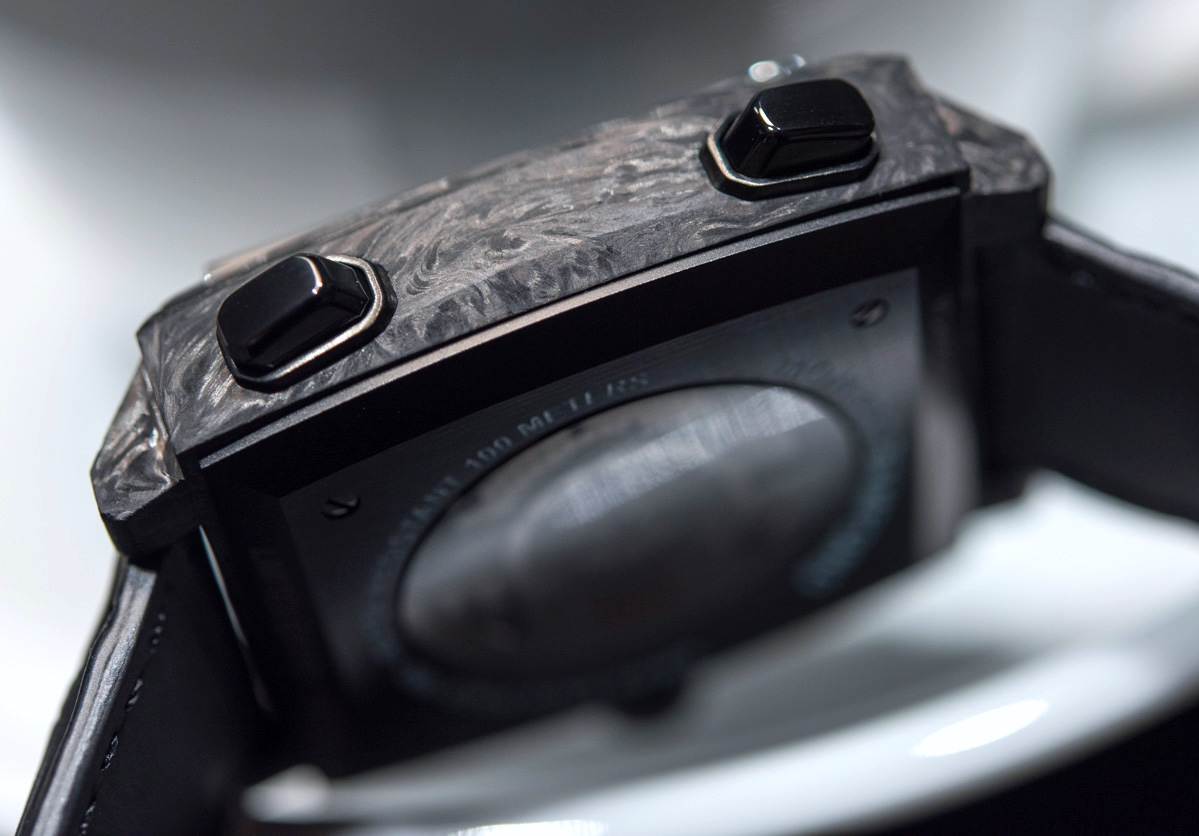 Matched to the forged carbon case was a dark grey alligator leather and rubber strap that had a satin surface to match the matte-ish look of the case. The Heuer deployant clasp matches the vintage Heuer logo on the dial, making this a bit of a mess in terms of modern and vintage styling. While I love this old Heuer logo, I feel as though the vintage logo was added just for the hell of it, without consideration for the decidedly modern overall look of the watch – and yes, TAG Heuer does still make many Monaco models with the full TAG Heuer logo on their dials. No matter how hard you try, the vintage craze still gets you, apparently. 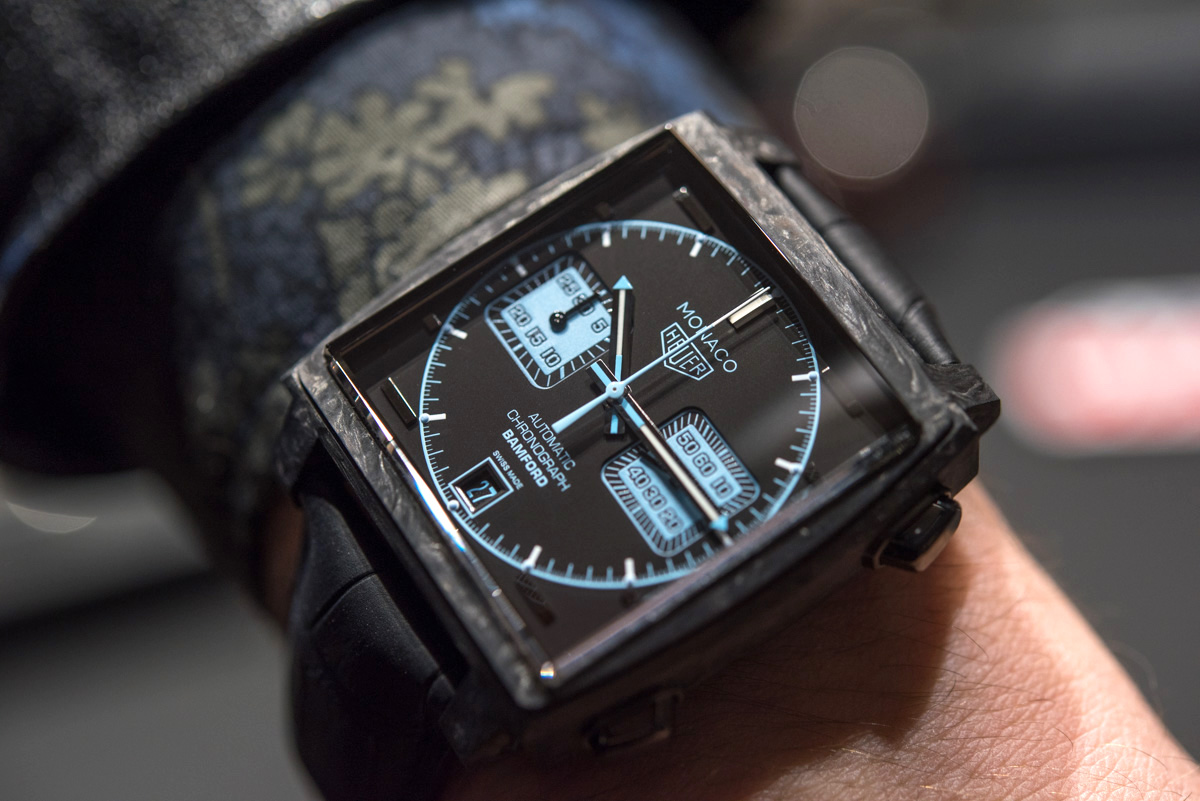 All things considered, this new Monaco Chronograph in forged carbon is a most welcome addition to the Monaco family that was, in all fairness, getting a bit self-absorbed with all the vintage stuff. The Monaco is a brilliant piece of design and nothing testifies to that fact more than how you can take it and dress it up in the materials and boldness of a very different age with such ease and success. Kudos to both TAG Heuer and Bamford for not being scared away from doing this even if everyone knows that many “purists” will dedicate a scary amount of time to hating it.