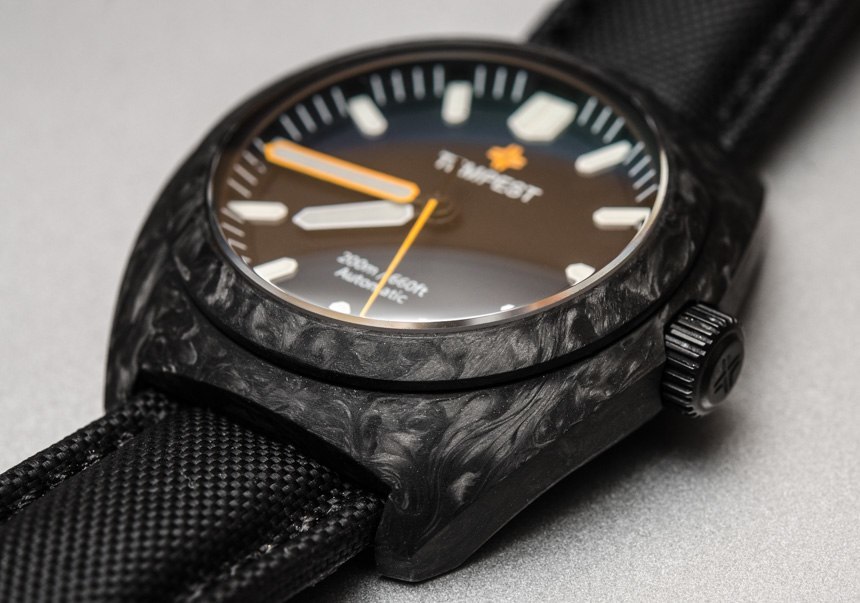 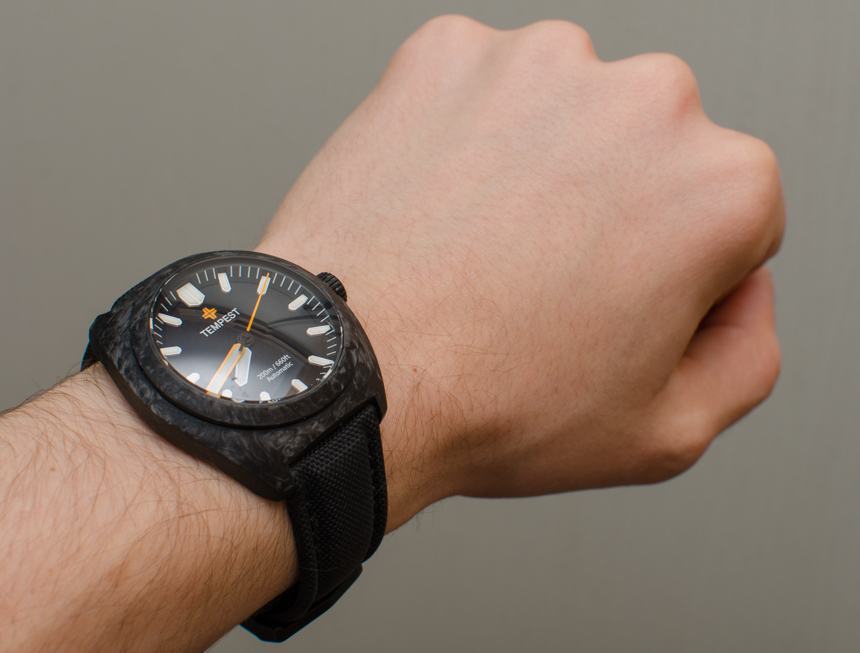 Today brings some very exciting news to indie watch fans, and especially those fascinated by more modern materials: the new Tempest Forged Carbon (or Tempest Carbon) dive watch is, to the best of our knowledge, the first non-limited edition production watch to offer a forged carbon case for under $1,000. While the watch’s Kickstarter campaign launches today, I have had the watch for a few weeks already, so what is coming up now is a full review of the impressive and rather unique achievement of this Hong Kong based indie brand. 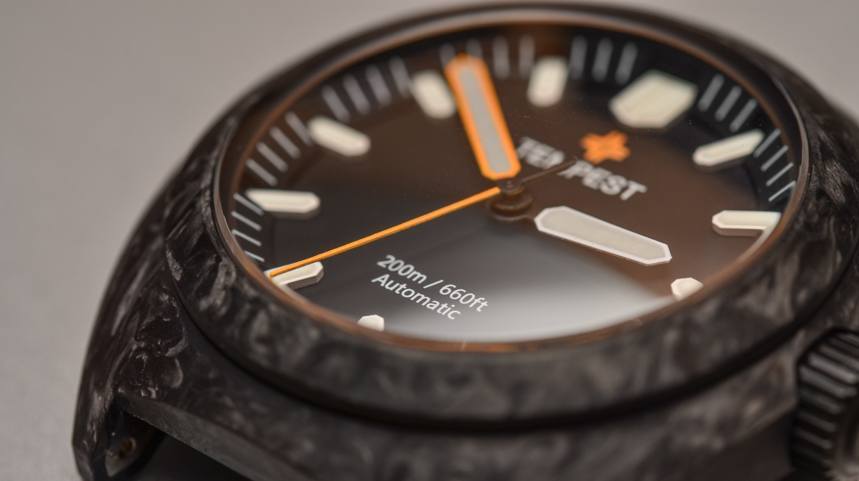 We wrote about Tempest earlier this year, when Ariel reviewed their 2,000 meter dive watch, the Viking (review here). That watch has already set the bar very high for Tempest, as the Viking was arguably one of the most solidly built indie dive watches I personally have ever seen. However, with the Tempest Forged Carbon we are looking at an entirely different approach to the “forum diver” watch, and with that, let us start with addressing the elephant in the room: its forged carbon case.

As we have discussed before, there are four major types of carbon that can be encountered in watches today. For one, there is CFRP, i.e. carbon fiber reinforced polymer, like what we have seen in this ITAnano watch (reviewed here). Then, there is what is usually referred to as “carbon fiber,” which has a checkerboard kind of pattern to it, thanks to the layered structure of carbon fiber – as seen in the case and bezel of this Hublot Big Bang Ferrari (hands-on here). Third, we have NTPT, a more recently developed material that comprises hundreds of microscopically thin layers of carbon, as first featured in this piece by Richard Mille RM35-01 (hands-on here)… 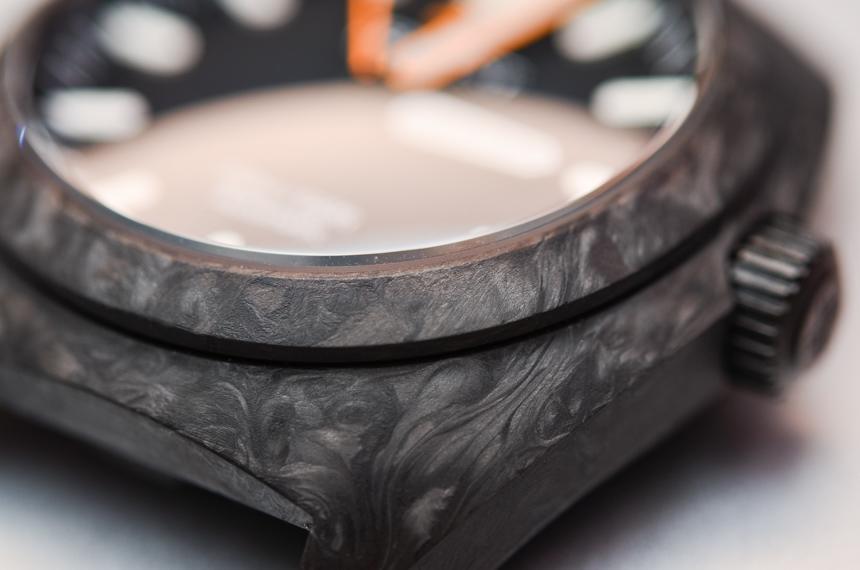 And with that, we arrive at the final category and the one that we find in Tempest’s latest release: forged carbon. It is a material that for long has been reserved to top-tier brands only, who offered it in watches often priced well over the $10,000 mark – with Audemars Piguet possibly being the brand who we saw most frequently use it in its watches. Very recently we brought you the news of Magrette’s new 10-piece limited edition that offered a forged carbon cased watch for $1,225 (article here). Forged carbon is different in that it does not feature a layered construction, but rather tiny strips of carbon are cut and placed into a mold, where these pieces melt and bond once and for all under tremendous heat and pressure. This process results in a very light and extremely tough material, as well as a unique aesthetic, where no two cases will ever look exactly the same. That is because the way the strips move about within the mold is never exactly the same, and so their final position – in which they bond – changes from one case to the next. 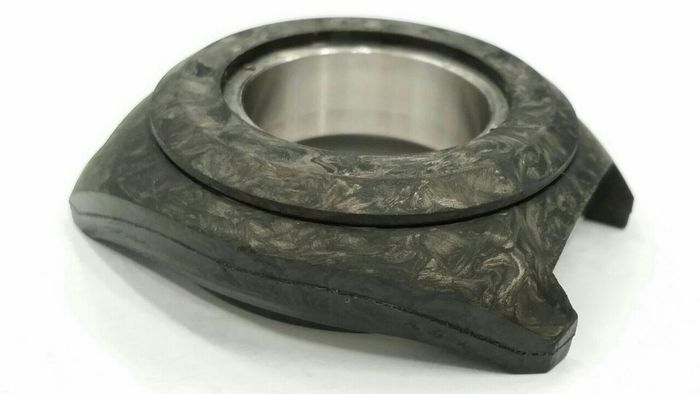 The forged carbon case has a matte black (under some lighting conditions dark gray) color to it, with some parts of the wavy pattern standing out, thanks to their grey/silvery color. The bare carbon is warm and very soft to the touch, and to some extent, it even feels as though it were a delicate material. That, however, could not be further from the case: forged carbon is a material that was developed to be used in airplanes, military forces’ equipment, as well as racing cars and boats. And while it is very likely that neither of these industries care too much about the tactile feel of a newly developed material – their top priorities rather include rigidity, durability, and precision workmanship – the forged carbon case makes for a somewhat unusual, albeit very pleasant wearing experience. 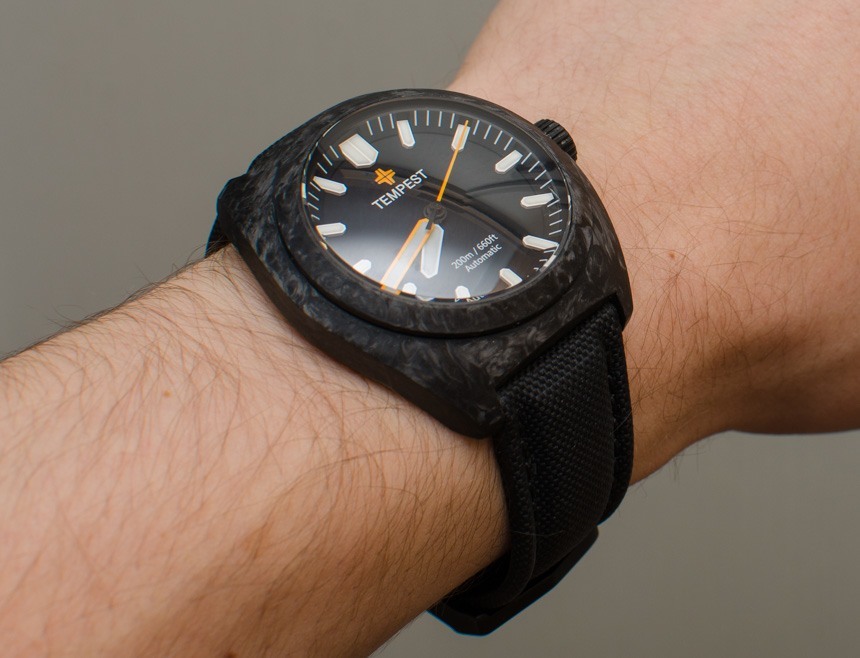 The 43 millimeter wide case measures 47.5 millimeter from lug to lug, 14.75mm thick, and is water resistant to 200 meters. Surprisingly, perhaps due its matte black color, the Tempest Forged Carbon wears and looks considerably smaller than those figures would suggest. The sub-50mm lug-to-lug measurement ensures that the watch does not extend over the edges of even relatively small wrists (like mine, at 6.75 inches). The light – albeit not quite featherweight – case further enhances wearing comfort. 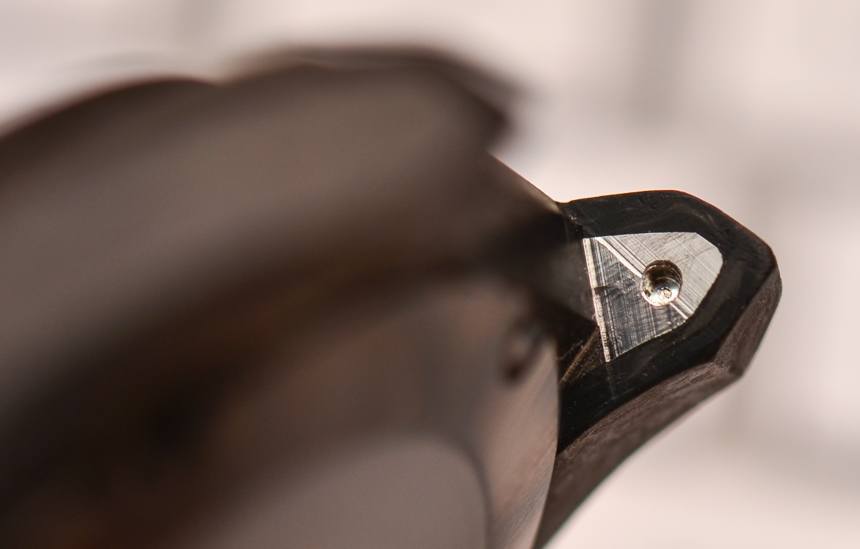 The inner steel core, visible on the inside of the lugs when the straps have been removed

A somewhat lesser known fact, perhaps, is that this forged carbon case has to have a steel inner casing, as well as a stainless steel case back, because forged carbon cannot be machined with the microscopic tolerances that is required from any highly water resistant case. This nature of forged carbon draws two direct consequences. First, while the weight is of course lower than what is experienced with a solid stainless steel watch, it is perhaps not as light as one would expect it to be. Furthermore, while the large, single-piece carbon exterior remains warm to the touch even when the external temperatures are low, the steel caseback picks low temperatures up and as such gets really cold – making for the usual, somewhat unpleasant feel when first put on the wrist. Nevertheless, the black PVD coated steel caseback does have a very cool design feature: it displays some of the key characteristics of the watch in a unique, periodic table inspired way.

It is here on the caseback where the Miyota 9015 movement is mentioned: it is the more refined automatic movement of Miyota that offers a 4 hertz frequency, 42 hours of power reserve, hand-winding, hacking seconds, and also a date – although the latter is not visible on the dial side. The 9015 is a reliable and relatively accurate movement that is preferred by many smaller and larger watch brands who compete in the more affordable price segment. 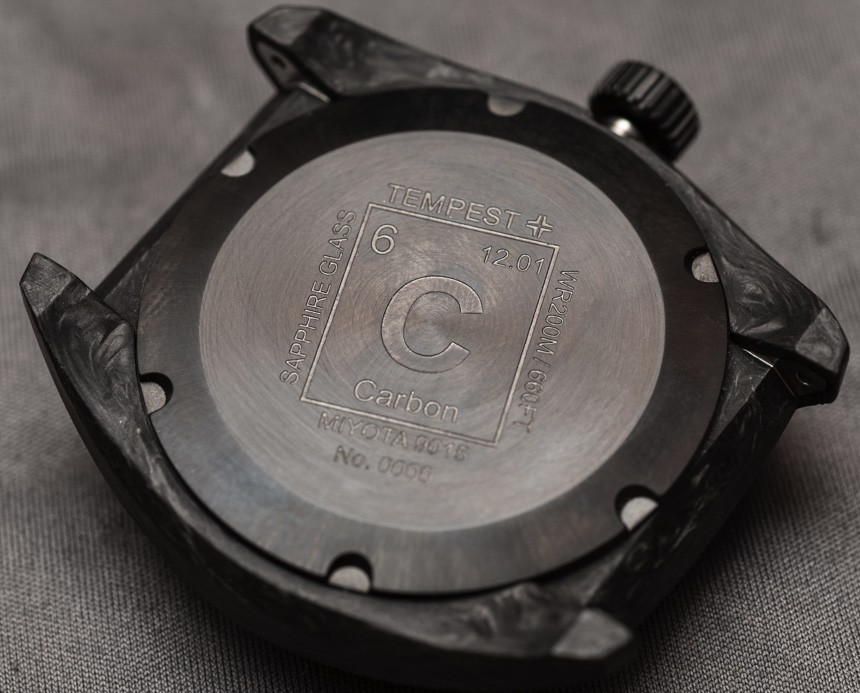 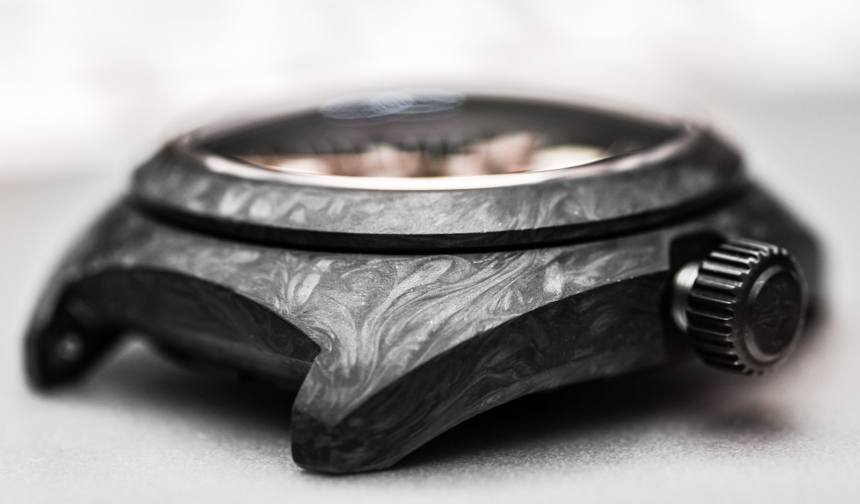 Second, because forged carbon – again, owing to its complex and random structure – cannot be machined with extreme tolerances, case shapes and finishing techniques have to face some limitations as well. The case of the Tempest Forged Carbon has a bit of a retro-diver look to it as far as its barrel shaped sides are concerned, while its texture and one-piece construction most definitely belong to the 21st century. The side of the case features an elegantly curved edge that flows in between the very edges of the lugs; and although its curve is nicely designed, the edge between the vertical and horizontal surfaces is certainly not as well-defined as it is on metal cases. For most, this will presumably be considered as one of the several beauties of this special material, but I also understand that for some, this softer edge may not be a preferred design element. 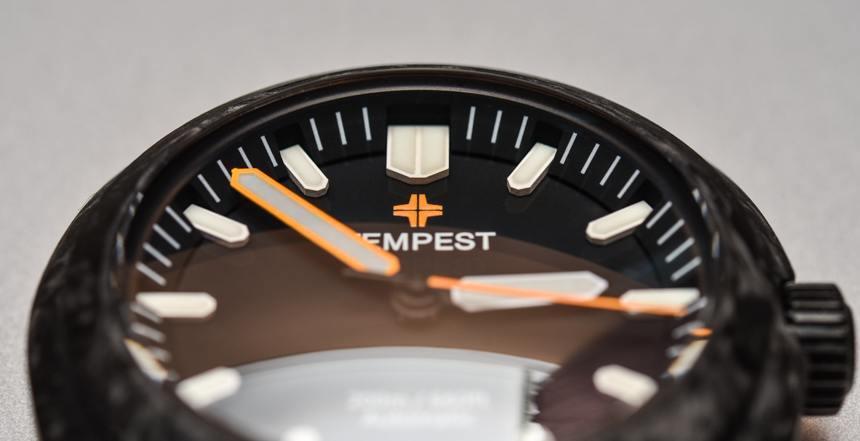 The case is rounded off by a domed sapphire crystal – quite possibly the only component in the Tempest Forged Carbon that I could not get to like. This thick piece of crystal definitely is of high quality, and due to the fact that it is domed on both its inner and outer surfaces, it allows for a distortion-free view of the dial underneath, even when examined from steeper angles. My issue with the crystal is that, while it is almost completely free from any distortion at most viewing angles, the strongly curved, double-domed design makes for an unusually high amount of reflections. The large curvature of the crystal means that under some lighting conditions, you will see a rather clear reflection of the person standing next you – to some extent, it sometimes works like a curved mirror. It is here where we should note that the piece I have been wearing is a pre-production prototype, and chances are that the final pieces will receive better AR coatings. 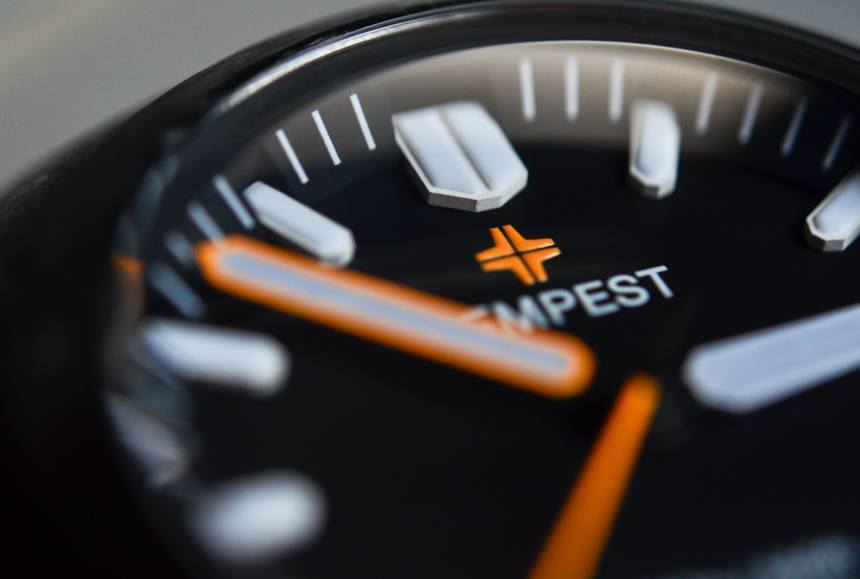 In most cases, a relatively high amount of reflections negatively affects legibility, but fortunately, that is not quite the case here. The plain black dial is dominated by the sufficiently long and rather thick hour and minute hands, as well as the high contrast provided by the white colored, hand-applied indices. Although the dial sports the Tempest logo at 12 o’clock and some obligatory script at 6, what gives it a more three-dimensional look are the applied indices, which cut into the steep flange ring on the periphery of the dial. In conclusion, daytime legibility remains good, despite the unwelcome reflections.

Where the Tempest Forged Carbon really shines, though, is night-time legibility: the more frequently encountered C3 SuperLuminova has been swapped for BGW9 luminescent material. As per my personal experience, there are three main differences between C3 SuperLuminova and BGW9. First, the latter glows in pale blue, while the former in green. Second, during the daytime, the latter looks white (offering somewhat better contrast against a black dial), while the former tends to look more green during the day. Last, while I found that BGW9 lacks a bit of punch compared the C3 when its fully charged, it does last considerably longer. I was surprised to see just how bright and legible BGW9 remained early in the morning, over 8 hours after its last exposure to a light source. Even the small Tempest logo is painted with orange/yellow lume – and the production version will have a orange lumed seconds hand as well. 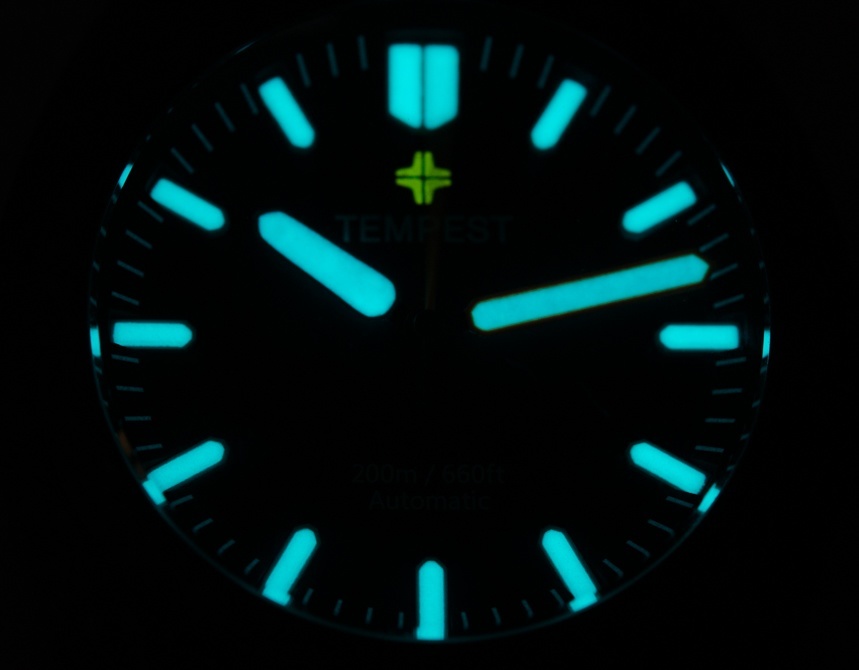