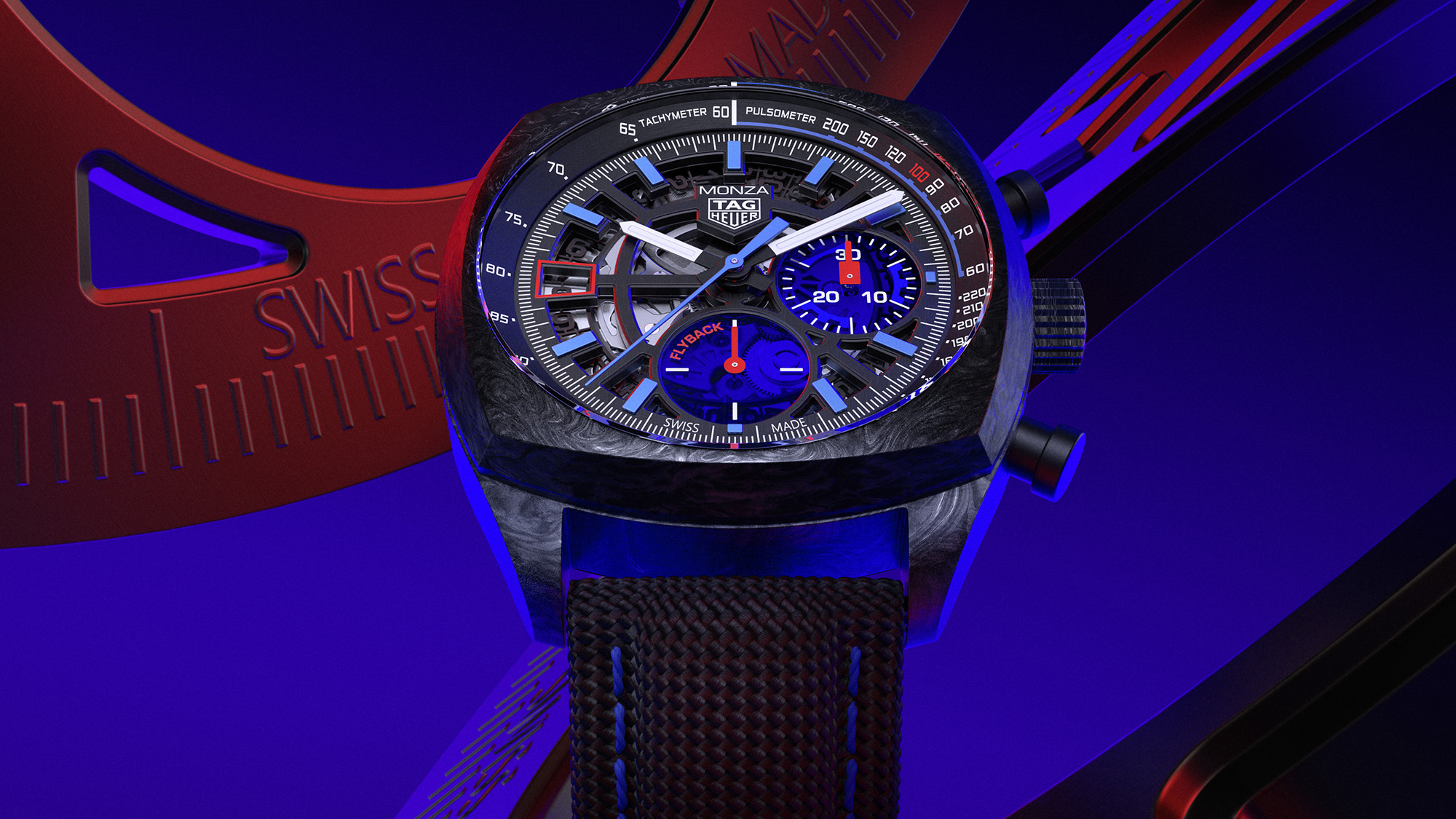 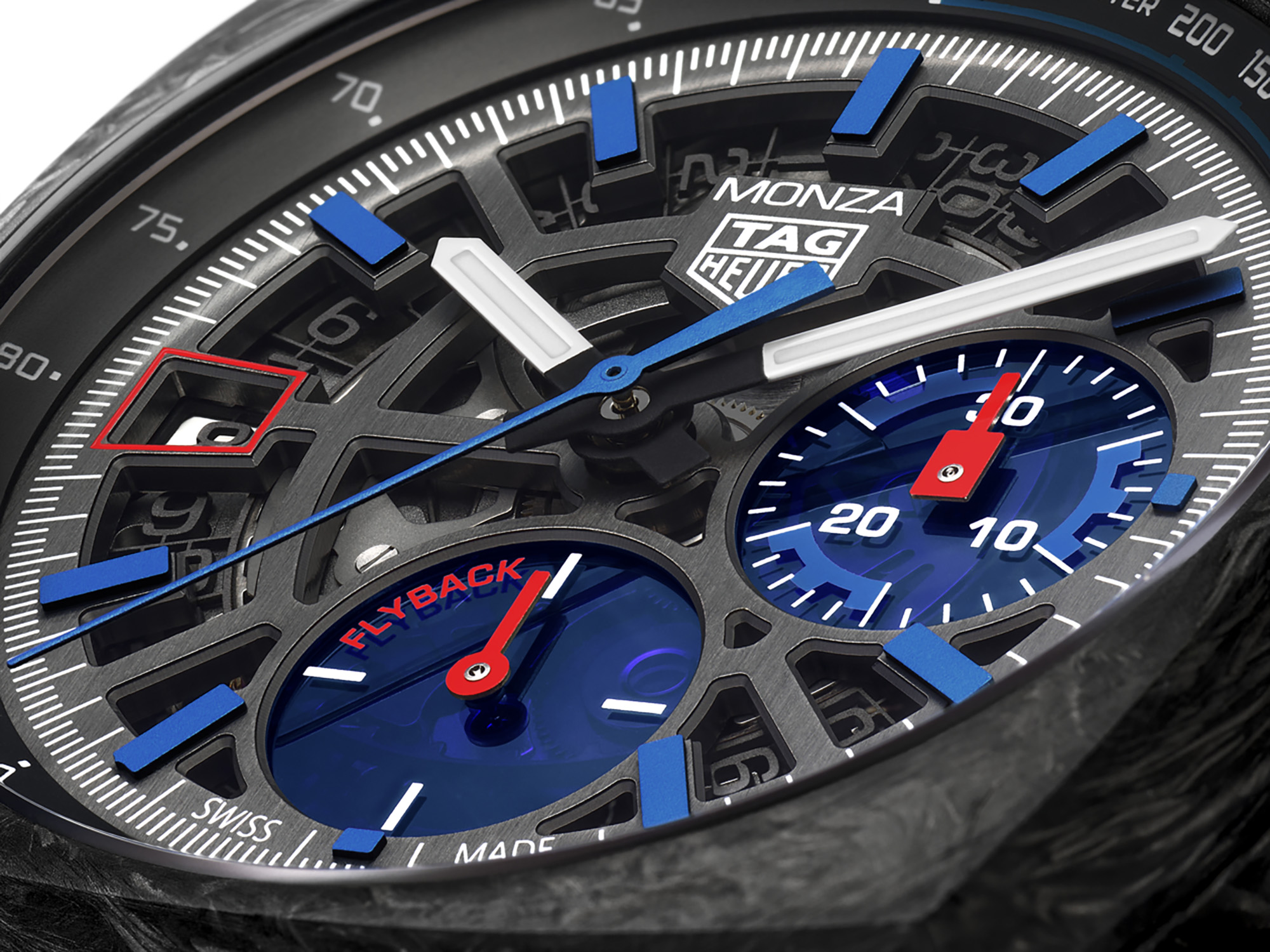 There’s no shortage of evocative and beloved nameplates in the TAG Heuer catalog, particularly when it comes to chronographs. Series like the Carrera and Monaco have been enthusiast mainstays since the ‘60s, but there are a handful of rarer lines through the brand’s long history that only appear in special circumstances. The TAG Heuer Monza is perhaps the best example of this, returning to the brand’s lineup only a handful of times since its introduction in 1976, and heralding a paradigm shift each time it appears. The original Heuer Monza of the ‘70s was the brand’s first-ever black-cased watch and celebrated the brand’s partnership with the Ferrari Formula 1 team through its blazing Rosso Corsa red accents. When the TAG Heuer Monza returned in the early 2000s, it brought with it a new focus on early 20th-century-inspired styling and an all-new case design for the brand. The last TAG Heuer Monza to be released in 2016 became one of the most celebrated watches of that year, due to its “best of both worlds” approach blending a modern DLC-coated titanium case design with evocative ‘70s touches without directly copying the original. For 2023, the Monza name returns to the TAG Heuer stable, and as with previous iterations, this nameplate brings with it an innovative new style. The new TAG Heuer Monza Flyback Chronometer is an aggressive, dynamically modern design that marries impressive in-house movement performance with radical modern aesthetics while still paying handsome tribute to the Monza models that came before it. 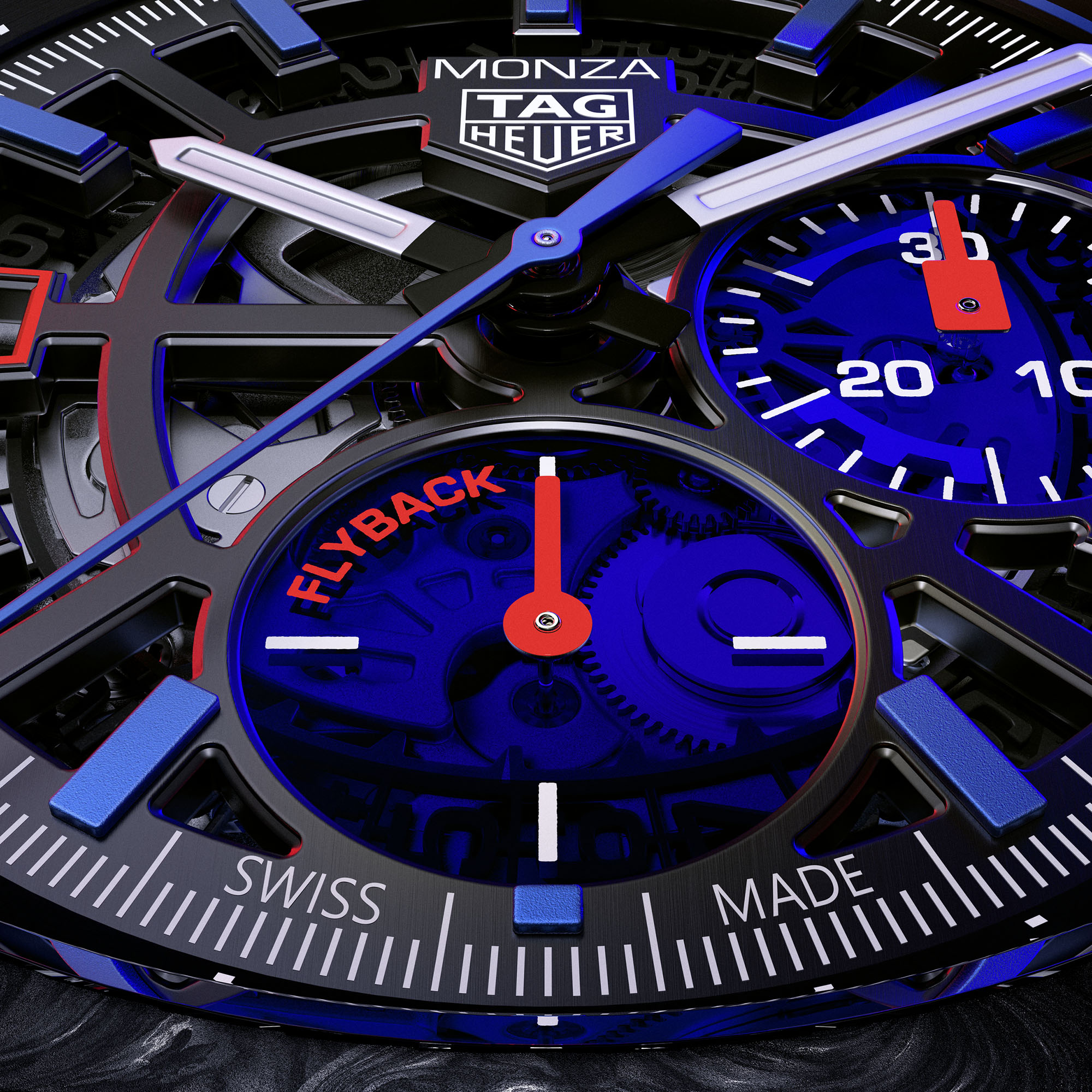 Although the TAG Heuer Monza Flyback Chronometer’s skeleton dial is a radical departure from the Monza iterations that came before, in some ways this futuristic design reinterprets the original Monza’s ethos for the modern era. This is most obvious in the recurring elements from previous Monza designs – the white baton handset, the simple rectangles of lume at the hours, the colorful graphics at five-minute intervals on the chronograph minutes subdial, and the combination tachymeter and pulsometer scale on the rehaut – but it shines through in the visual changes as well. Like the original 1976 Monza, this is a tribute to the successes of TAG Heuer’s partners in Formula 1. While the first Monza was bedecked with the blazing red synonymous with Ferrari, these days TAG Heuer is partnered with Red Bull Racing, and as a result, the red accents are gone in favor of Red Bull’s blue and red color palette. It’s a shift that markedly changes the visual personality of the watch, but one that does echo the spirit of its forebear. On a related note, this helps to explain the shift from the 2016 Monza’s “Heuer” branding to the full TAG Heuer logo on the new iteration. This isn’t trying to recapture the brand’s Heuer-era past, but to look into its future. 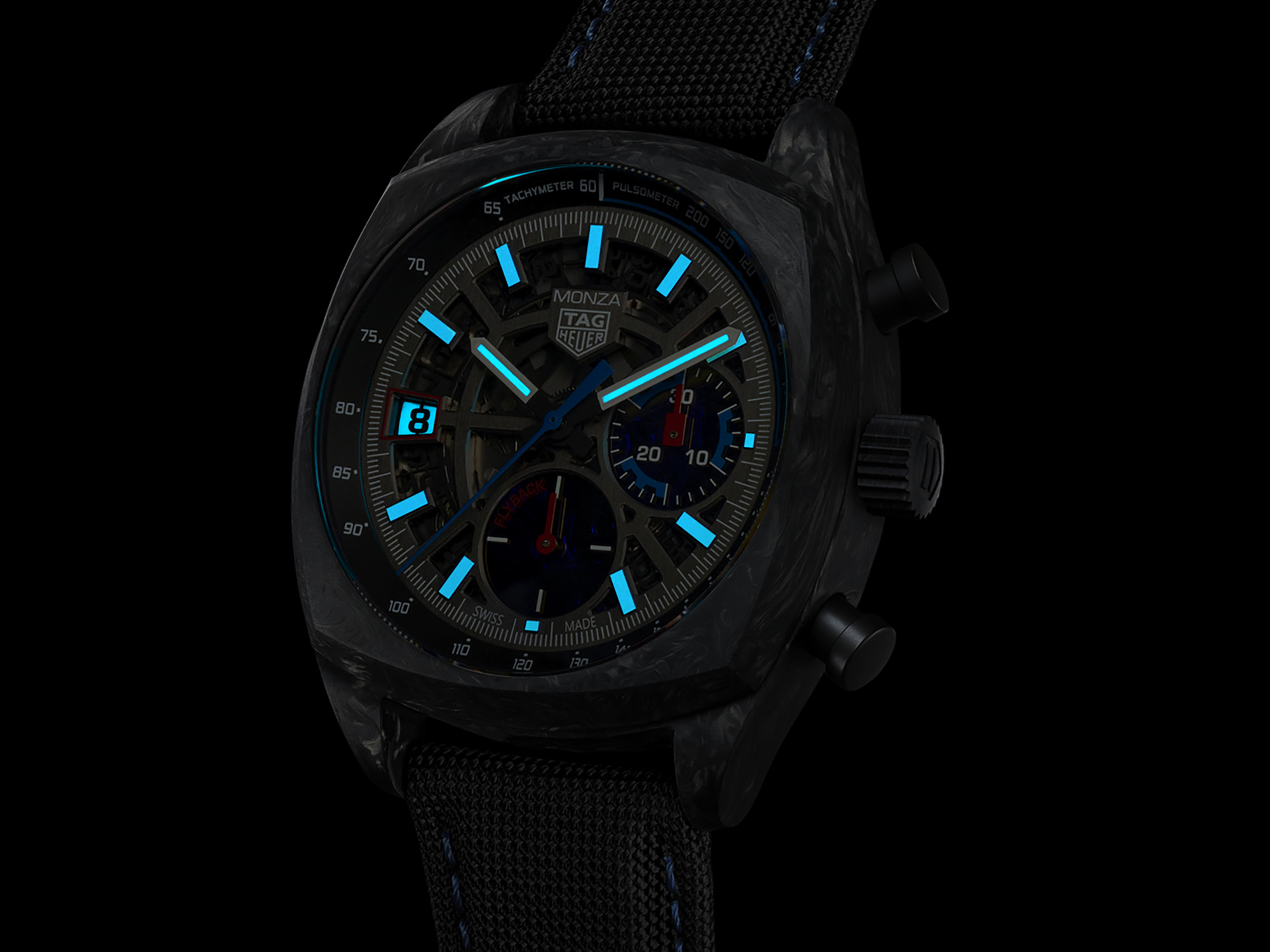 Admittedly, the asymmetrical skeleton dial design will not be to everyone’s taste, but there’s impressively thoughtful design work throughout this layout. The main skeleton dial bridge echoes the rounded-square shape of the Monza’s trademark bezel, while the overall design maintains a focus on legibility. There’s a full, clearly printed seconds scale at the edge of the dial, which when coupled with the already clear handset makes for easy reading. The subdials at 3 o’clock and 6 o’clock also feature surfaces of blue-tinted sapphire, striking a reasonable balance between utility and the visual drama of a full skeleton design. TAG Heuer keeps the 9 o’clock date window fully skeletonized in the vein of its more modernist Carrera offerings, but adds one more hidden touch in pursuit of visual balance and legibility – for the first time in TAG Heuer’s history, the date display is fully lumed in dial-matching blue Super-LumiNova. This prevents a visual “hole” from forming on the dial in low light and makes this display easy to read even in dark conditions. 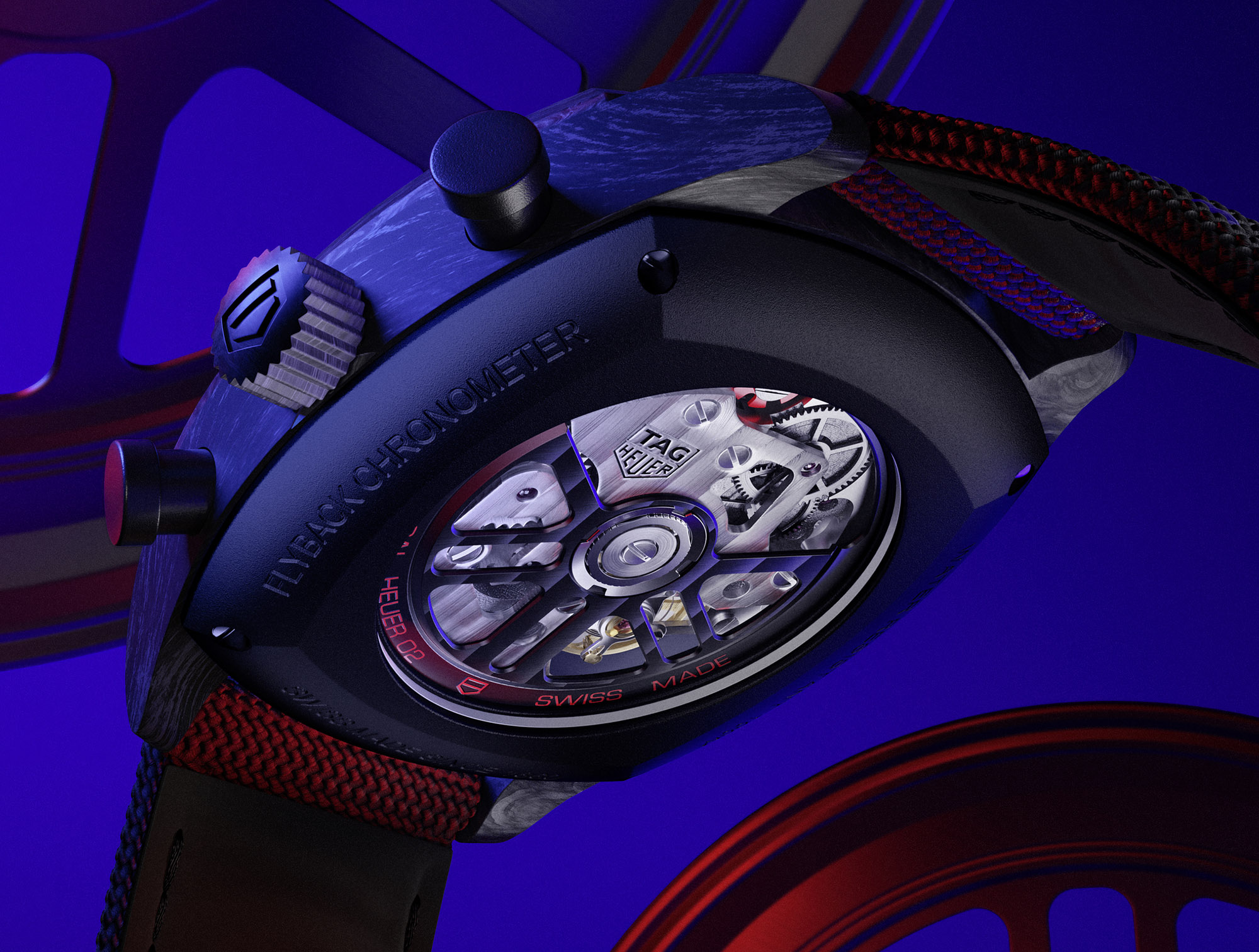 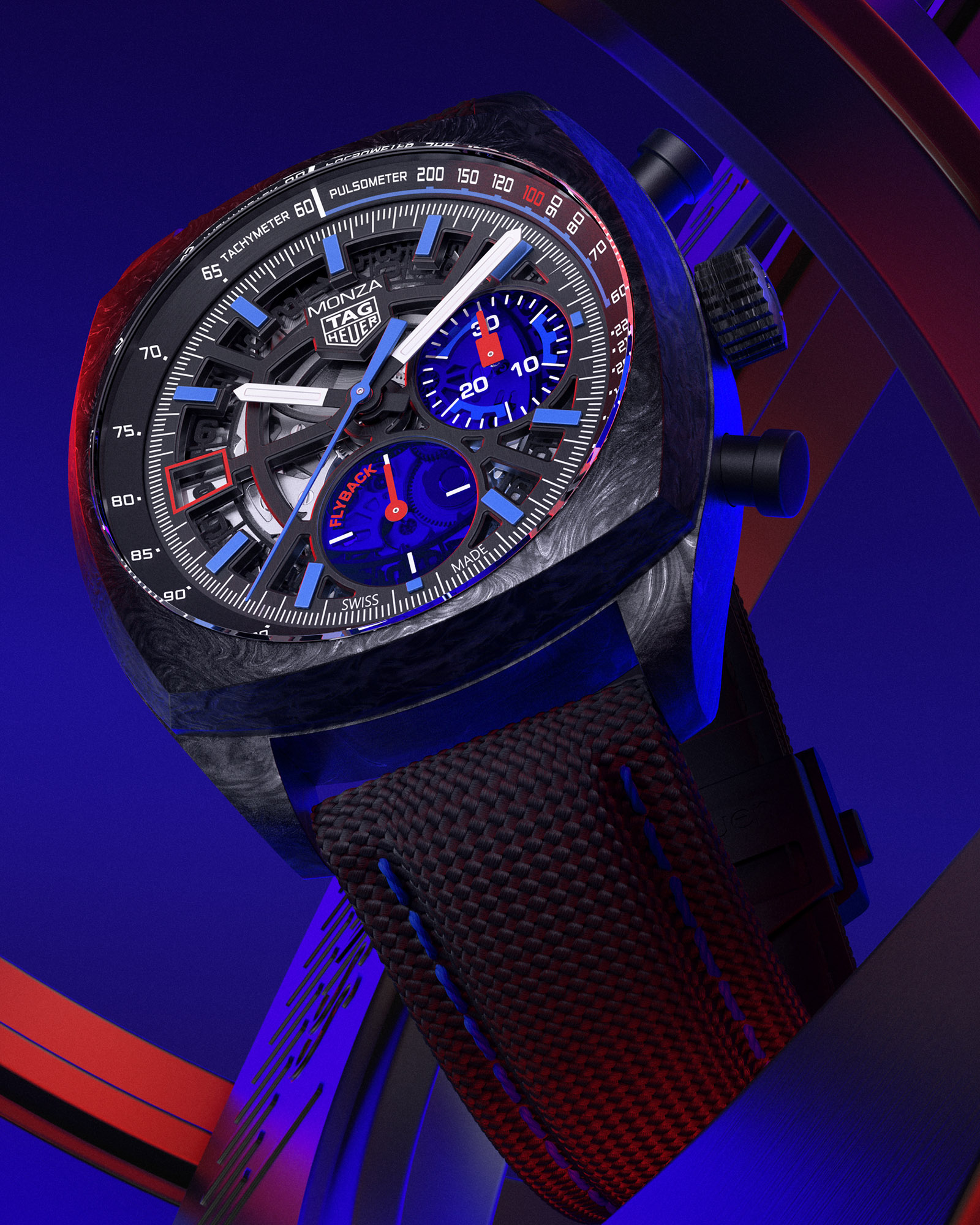