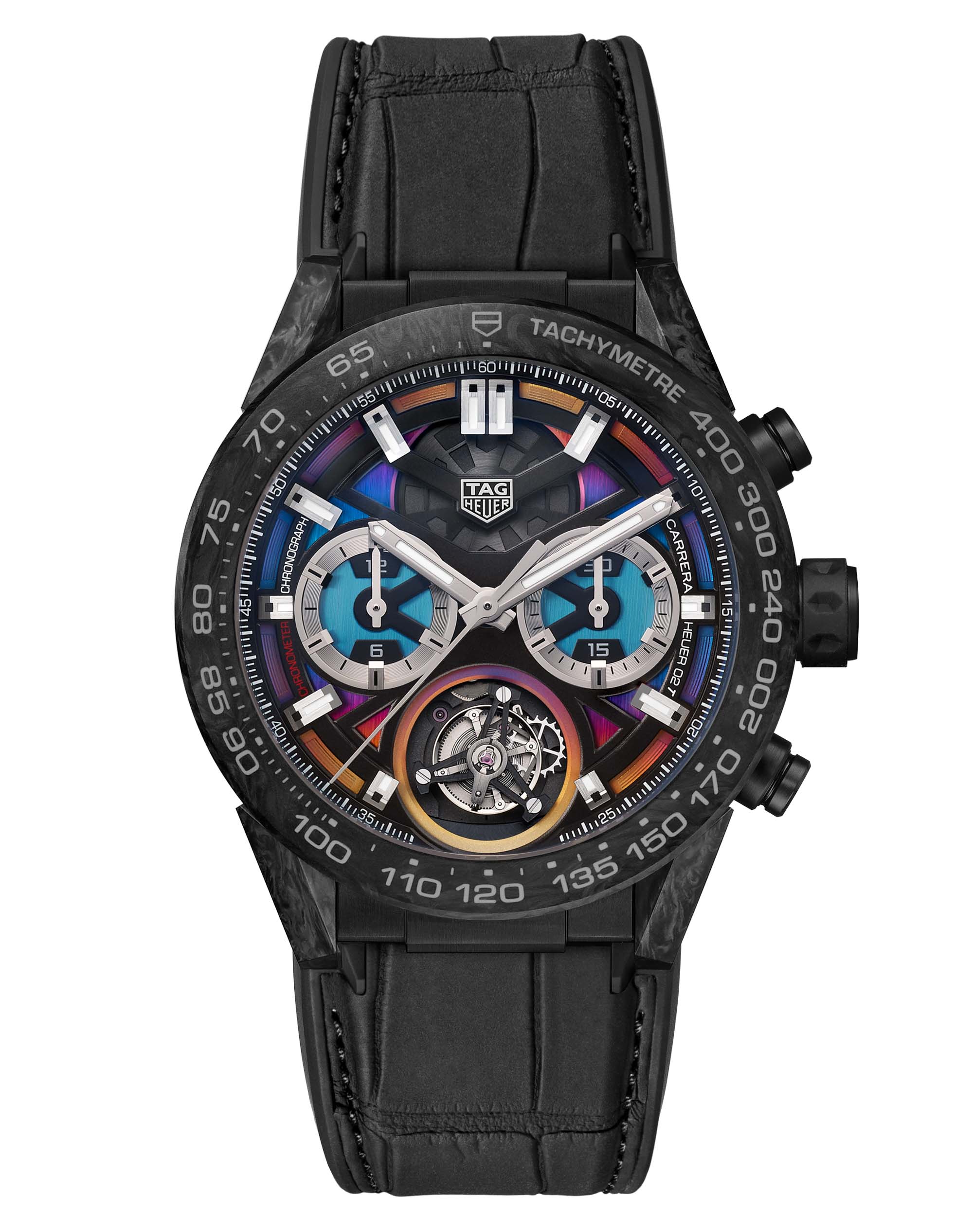 One of my favorite things about the TAG Heuer Carrera collection is its incredibly diverse assortment of timepieces. In addition to including traditional three-handed models, chronographs, and even GMT watches, the TAG Heuer Carrera lineup also includes everything from vintage-inspired models that pay tribute to the Carrera’s 1960s roots to thoroughly modern creations that showcase state-of-the-art materials and manufacturing techniques. The latest addition to the brand’s lineup is certainly of the later variety, and the new TAG Heuer Carrera Chronograph Tourbillon Polychrome mixes a titanium and carbon case with a rainbow-colored skeletonized dial to create a fresh take on one of the most modern renditions of the Carrera that is currently available. 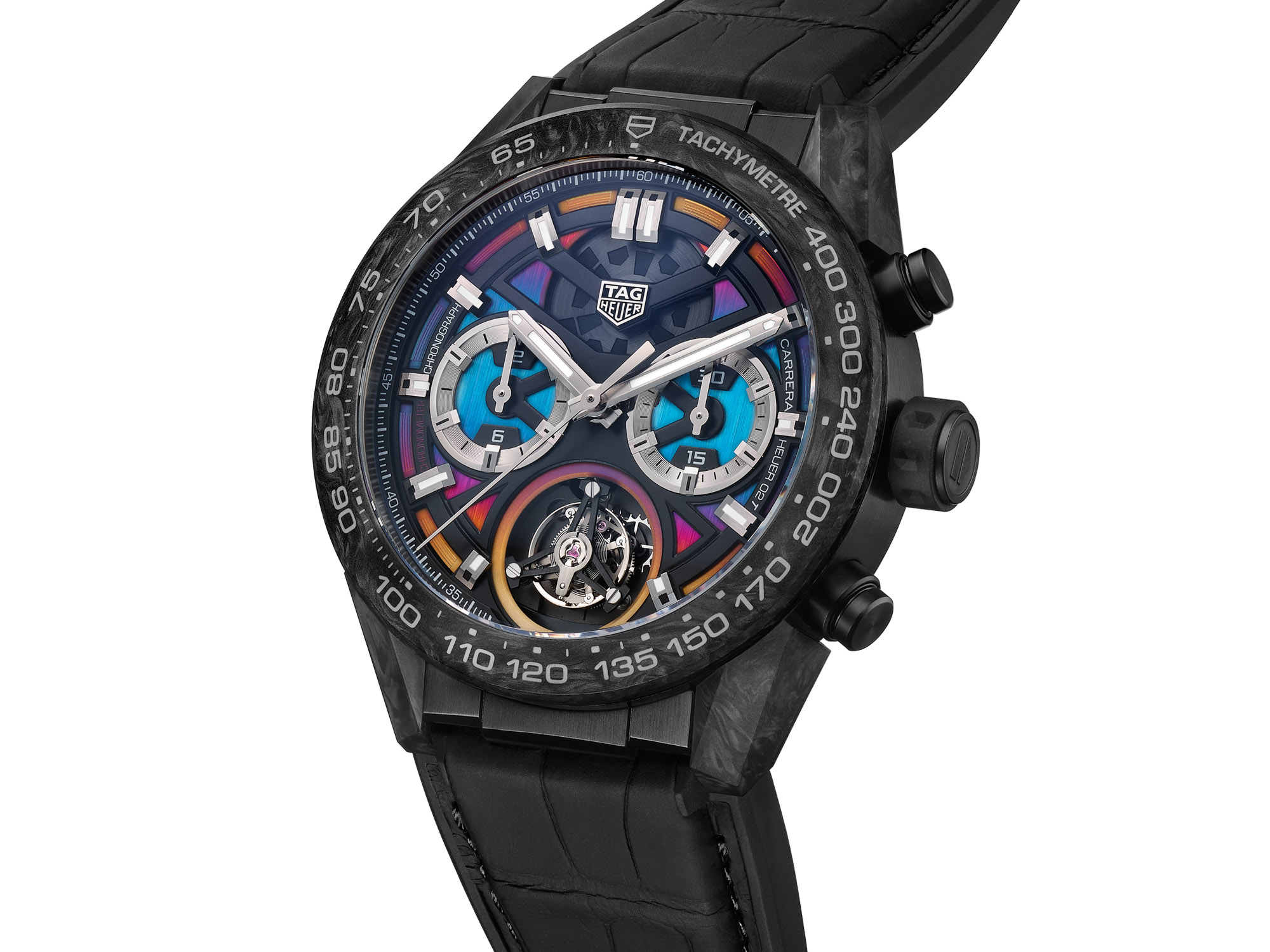 The overall case design of the TAG Heuer Carrera Chronograph Tourbillon Polychrome is based upon the limited edition Carrera Chronograph Tourbillon Nanograph that was launched in 2019. However, while the original model featured a case made from black PVD grade 2 titanium, the new TAG Heuer Carrera Chronograph Tourbillon Polychrome takes the same 45mm case format and swaps out grade 2 for grade 5 titanium and fits it with carbon lugs and a carbon tachymeter bezel that surrounds a domed and beveled sapphire crystal with an anti-reflective treatment. Sticking out of the right-hand side of the case are a pair of black PVD titanium pushers flanking a large winding crown that is also made from black PVD grade 5 titanium with a rubber insert for added grip. Protecting the movement side of the watch is a screw-on caseback, which is fitted with a sapphire display window and helps provide users with 100 meters of water resistance. 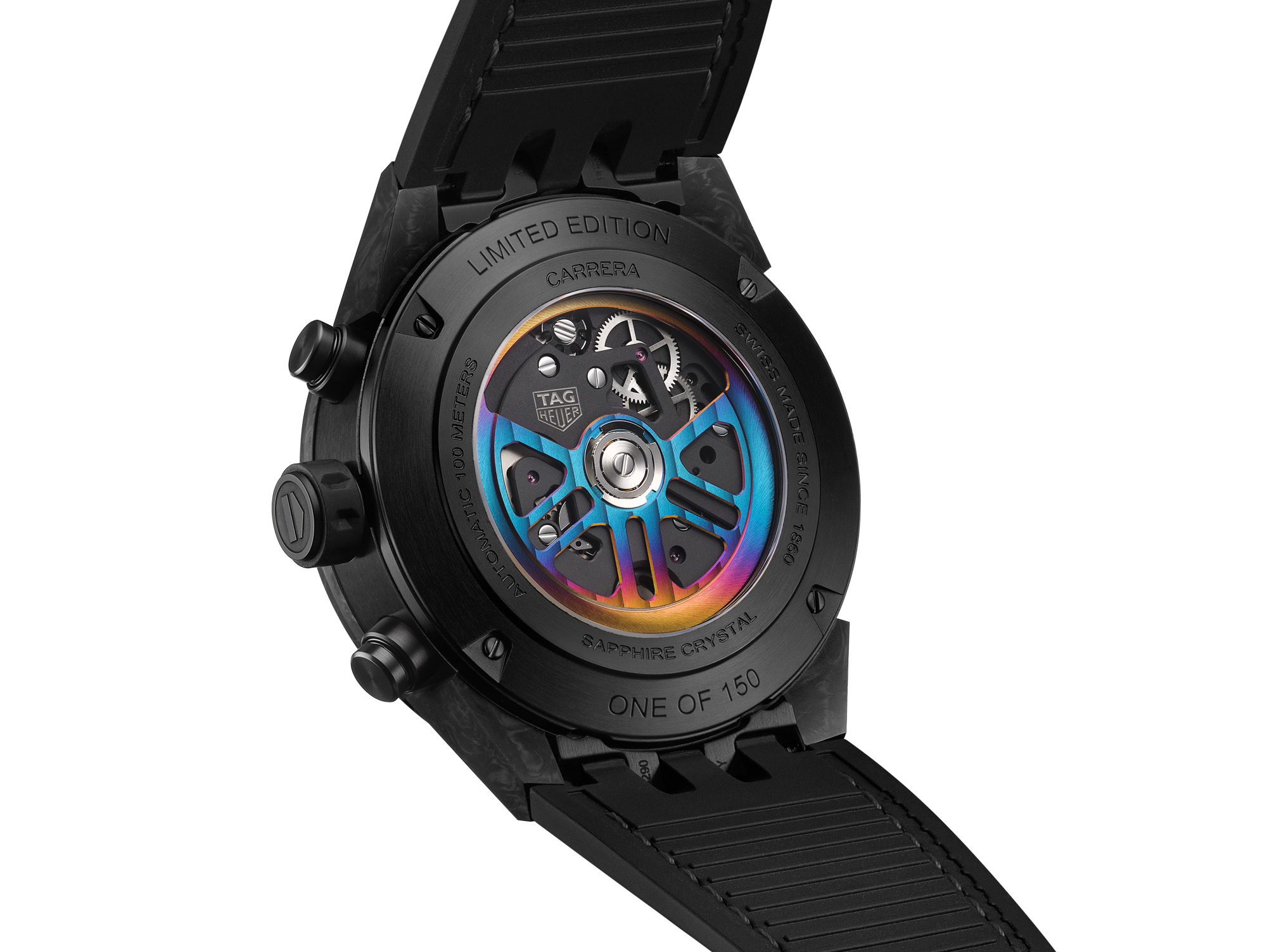 While the case of the TAG Heuer Carrera Chronograph Tourbillon Polychrome is thoroughly modern in its design and its multi-material construction offers plenty of visual intrigue, the rainbow-colored skeletonized dial is easily the centerpiece of the watch, and it is this feature that lends itself to the model’s “Polychrome” name. Featuring a three-register chronograph layout with the running seconds displayed by the visible one-minute tourbillon at the 6 o’clock location, the rainbow-colored lower layer of the dial is framed by a thin black flange with a 60-second/minute scale. This flange extends throughout the dial to form an architectural structure above the rainbow-colored surface that houses the rhodium-plated hour markers and matching rings for the two chronograph counters that appear at the 3 o’clock and 6 o’clock locations. 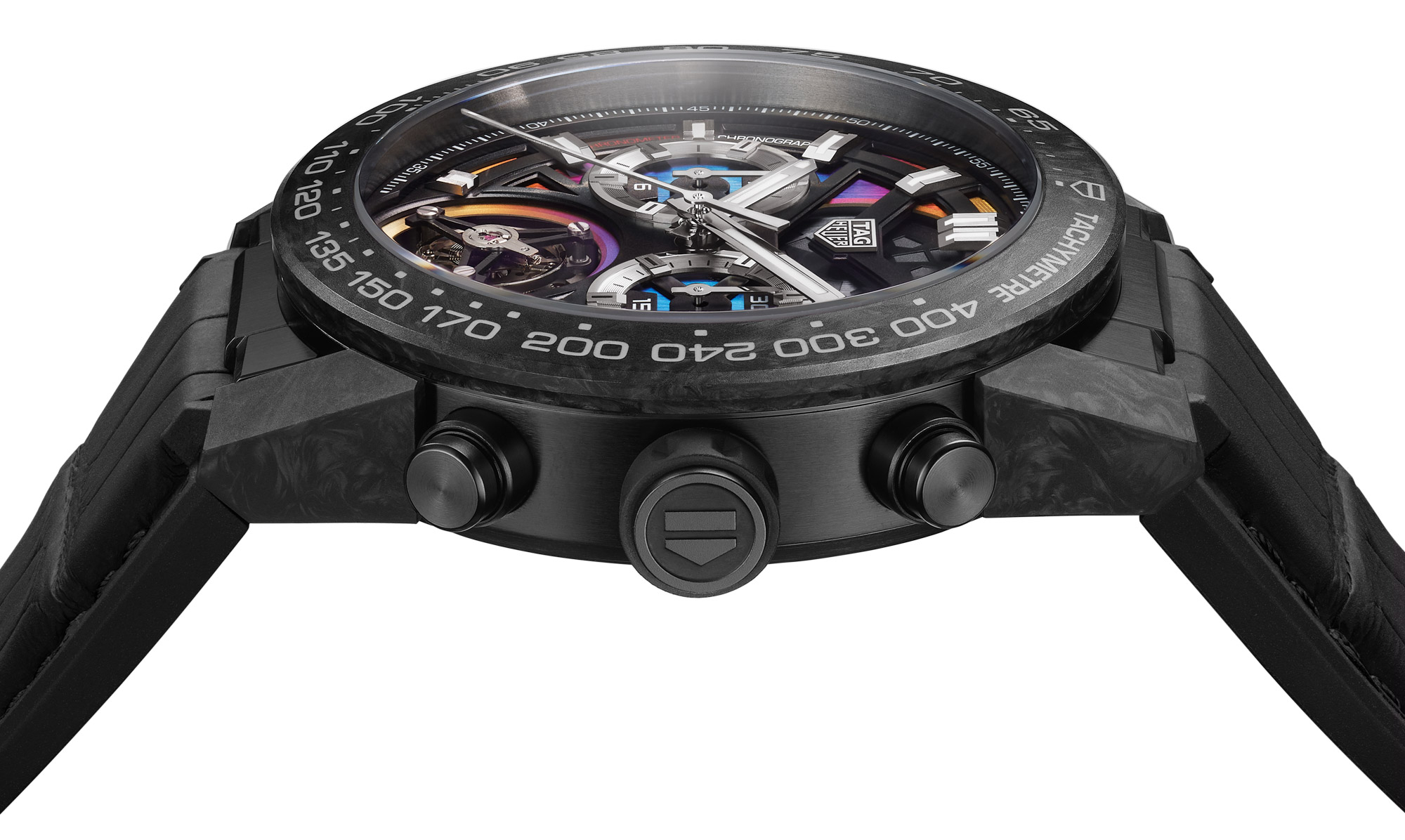 The rainbow-colored surface that sits below the black upper flange features an ultra-vibrant array of colors that moves in a smooth gradient pattern from light to dark and then back to light again as it moves vertically across the dial. This results in a smooth and cohesive overall appearance that offers a surprising amount of visual symmetry when paired with the black flange structure above it. TAG Heuer was able to achieve this unique rainbow-colored surface by working closely with one of its suppliers, which is the only company in the world to offer this style of “Positive Coating” surface finish. During the patented manufacturing process, metallic oxides are deposited in incredibly thin transparent layers, and by controlling the incredibly fine variations of their thickness (within a few nanometers), a gradual multi-colored spectrum can be achieved, and this is ultimately what results in its vibrant colors and the incredibly smooth transitions that can be seen as one color seamlessly blends into another. 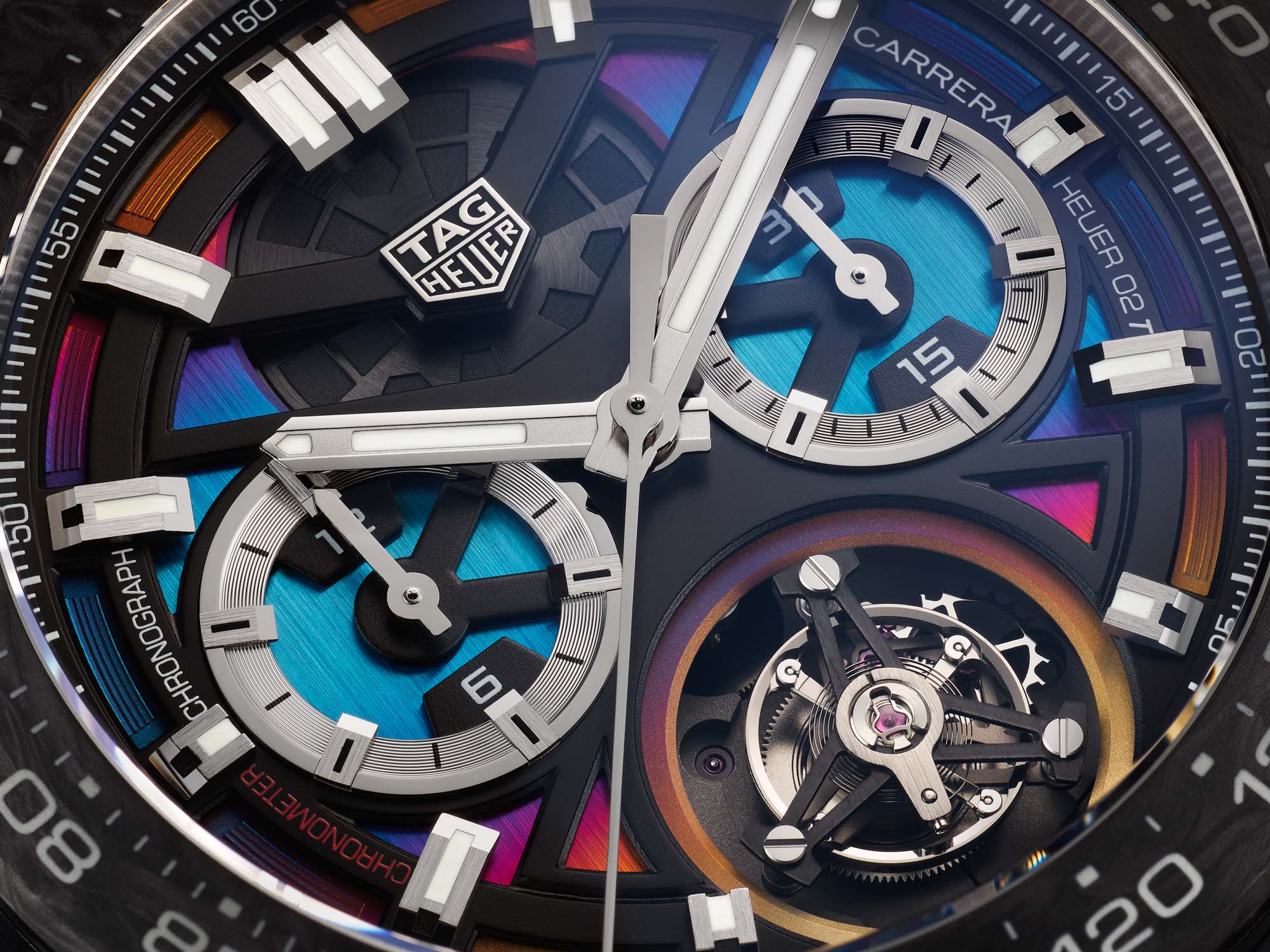 Powering the TAG Heuer Carrera Chronograph Tourbillon Polychrome is the brand’s Cal. Heuer 02T automatic movement. A COSC-certified chronometer, the Cal. Heuer 02T is developed entirely in-house by TAG Heuer, and it is a column wheel-controlled, self-winding integrated chronograph that runs at a frequency of 28,800vph (4 Hz) while offering users a power reserve of approximately 80 hours. The one-minute tourbillon is visible through the dial side of the watch, and the rest of the movement sits on display through its sapphire caseback window. The bridges of the movement receive a sandblasted matte black finish to compliment the modern overall appearance of the watch itself, while the large skeletonized rotor is finished with the same rainbow color gradient pattern that mirrors the effect on the dial. Completing the watch is a matte black strap made from alligator leather and rubber, which is fitted with a carbon and sandblasted black PVD grade 2 titanium folding clasp with a double push-button release. 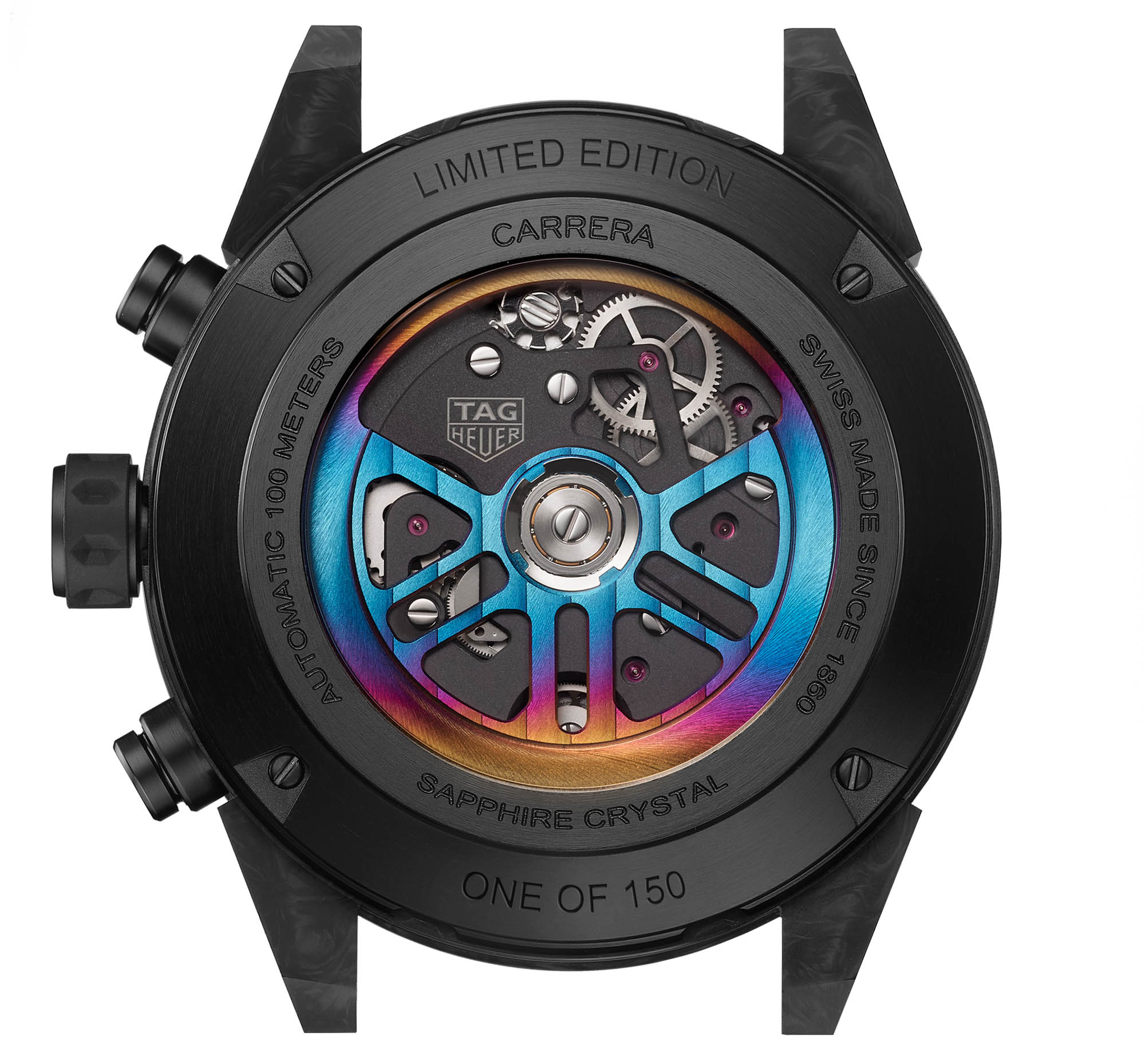 Generally speaking, I’m someone who personally prefers the more traditional-looking Carrera Chronograph models, and the modern-leaning ones can often be a bit hit-or-miss for me. That being said, I particularly like the look of this new TAG Heuer Carrera Chronograph Tourbillon Polychrome, as it offers a thoroughly contemporary design, while also feeling entirely more elevated than what you typically associate with the brand. However, it’s important to note that this watch is not your typical Carrera Chronograph, and while the vast majority of the brand’s other mechanical chronographs tend to hover in the $5k to $7k price range, the new TAG Heuer Carrera Chronograph Tourbillon Polychrome is accompanied by an official retail price of $25,050 USD. With that in mind, given that total production will be limited to just 150 examples worldwide, this watch isn’t something that the brand intends to make part of its permanent collection, but rather it is a colorful, modern, and highly exclusive rendition of one of TAG Heuer’s most celebrated models. For more information, please visit the brand’s website.