The Black Belt Watch, Only For People With Black Belts 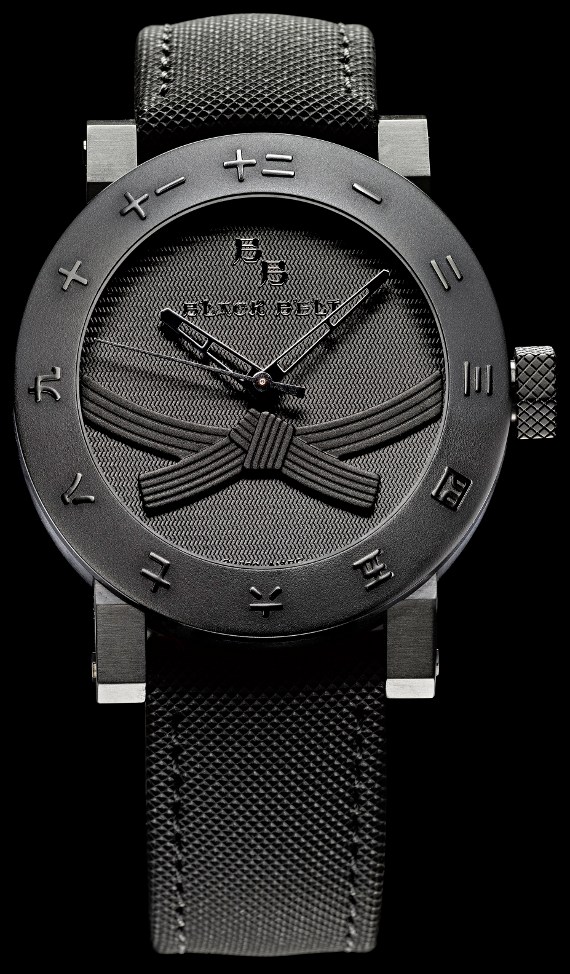 This watch comes with a great back story. A tale of a man they called crazy. A tale of a man, who probably is crazy, but we can all love him for that. It all started with Romain Jerome and their previous ‘lord & ruler,’ Yvan Arpa. The watch community generally has the perception that Yvan Arpa is a bit of an… eccentric. One who creates ideas that are pretty wild. Half the time the ideas work, the other times, they most surely don’t. One example of a failed idea was an all rusted watch (on the outside) enclosed in a hermetically sealed glass case. The idea was that once the glass was broken, the watch inside was guaranteed to work. To make a long story short, once some wild and wealthy people bought and subsequently broke the glass, the watch did not work at all – having been totally rusted through.

Other ideas do work, such as Yvan’s Titanic DNA watch for Romain Jerome. The watches worked so well, that they not only saved the dying Romain Jerome brand a few years ago, but catapulted it into a money making phenomenon with an incredible series of back orders. Flash to July 2009, and Yvan Arpa is forced out of the company by a disgruntled board of directors. Seemingly fett up with Arpa less than conservative personality. He and his managing team were out. The move was very strange, because Yvan WAS the Romain Jerome brand, and without him, the company was likely to wither away once the Titanic DNA concept became stale.

Arpa sued Romain Jerome for wrongful termination, and won via decision by a Swiss court. They found that he hadn’t done anything wrong, and Romain Jerome was in the wrong. What his future holds in unknown. What his present holds is this Black Belt watch. Yvan Arpa is known to be a martial arts enthusiast, participating in it himself having a black belt. Perhaps he was constantly threatening to fight (literally) the Romain Jerome board, which is why they freaked out.

Arpa and a few others have collaborated on a new watch concept called the Black Belt Watch. The idea is a watch that will only be sold to people who actually have earned black belts. The watch will be officially launched at the end of October, 2009 at a martial arts fighting event. Black belts who want to buy the watch won’t be limited to any specific type of martial arts. Any type will do assuming you have achieved the highest level of expertise. When placing an order for the watch, you need to attach a copy of your black belt award certificate.

The watch is pretty interesting, but subdued, especially for Arpa. It has black belt and marital arts themes through and through. The all-black color is meant to remind you of its influence, as the watch has five different black shapes all over it. The strap is a special textured rubber over calfskin leather (that has been made water proof). The look is meant to remind you of kimono material, or also the material black belts are make of. The watch itself is likely large (Arpa’s style), and is done in steel having been coated in black PVD with a satin finish. The bezel has Japanese Kanji numerals as the hour markets. With 100 meters of water resistance and the nice construction, the watch is meant to be relatively durable.

On the dial you’ll see the iconic belt and knot from the activity that the watch is meant to honor. The “Black Belt” logo on the dial does look a bit cheesy, you have to admit. At the same time you get the idea. The hands of the watch emulate the look of Shinai, which are wooden swords used during sparring practice in the Japanese art of Kendo fighting. Inside the watch is an automatic mechanical Swiss movement. Which brings up another important point, the entire watch and movement are made and assembled in Switzerland.

One the rear of the watch is the most important phrase. There is engraved “For Black Belt Only,” apparently in rose gold. To me, it is a lot like those cheesy hats that remark “I am number 1.” At least here it is hidden on the back. If there was ever a watch that was based on emotion, it is this. I don’t know how many black belts there are in the world, but if you see someone with this watch, ask them to prove it to you. I suppose the alternative is wearing your black belt on the exterior of your clothes all the time. So to the kick-ass nation out there, get yourself one of these watches. Cause if you went through all the work of getting a black belt, you want people to know! Price for this watch actually isn’t too bad given Arpa’s track record. You can “apply” to get one for the retail price of 3,000 Swiss Francs.