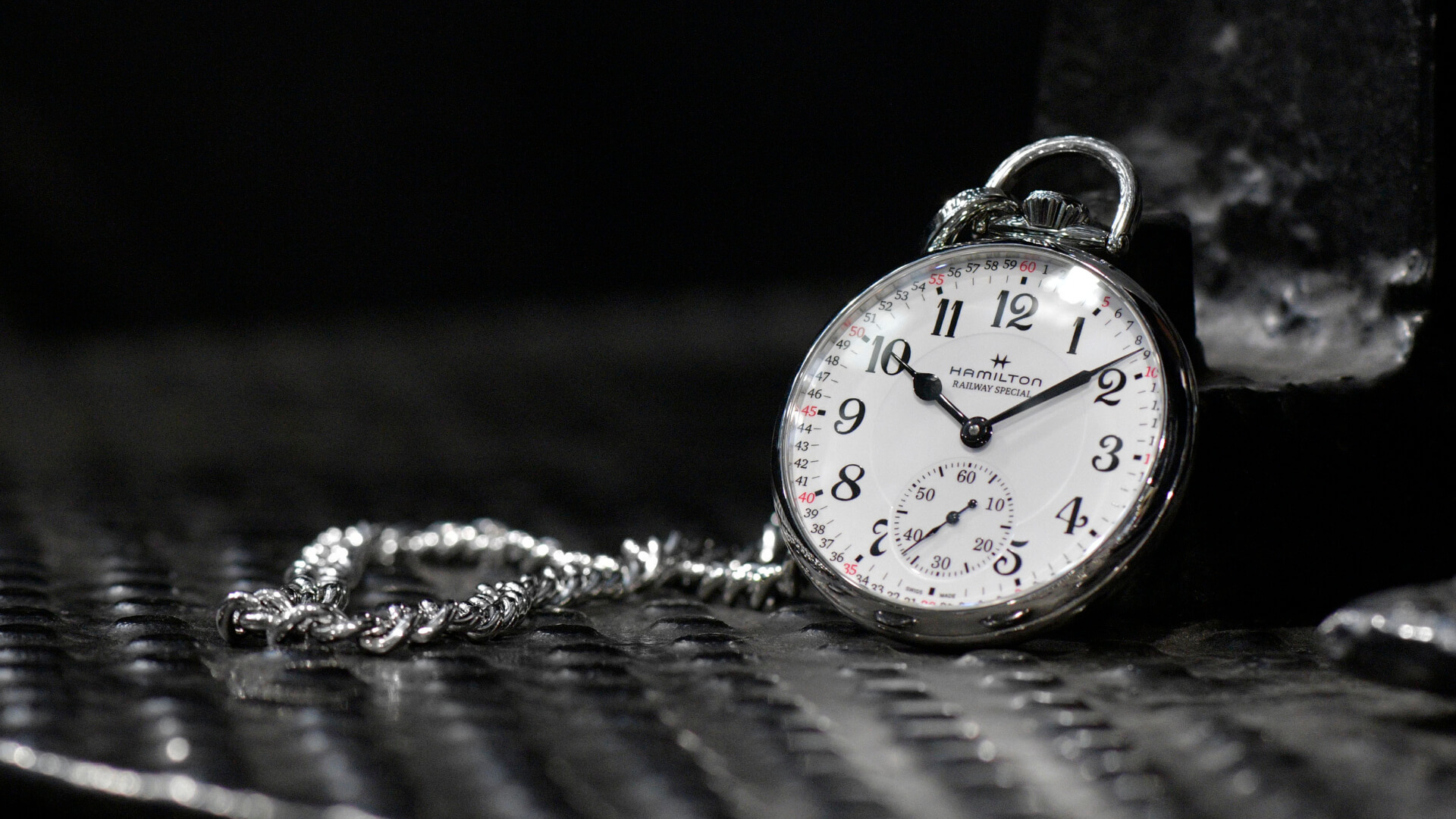 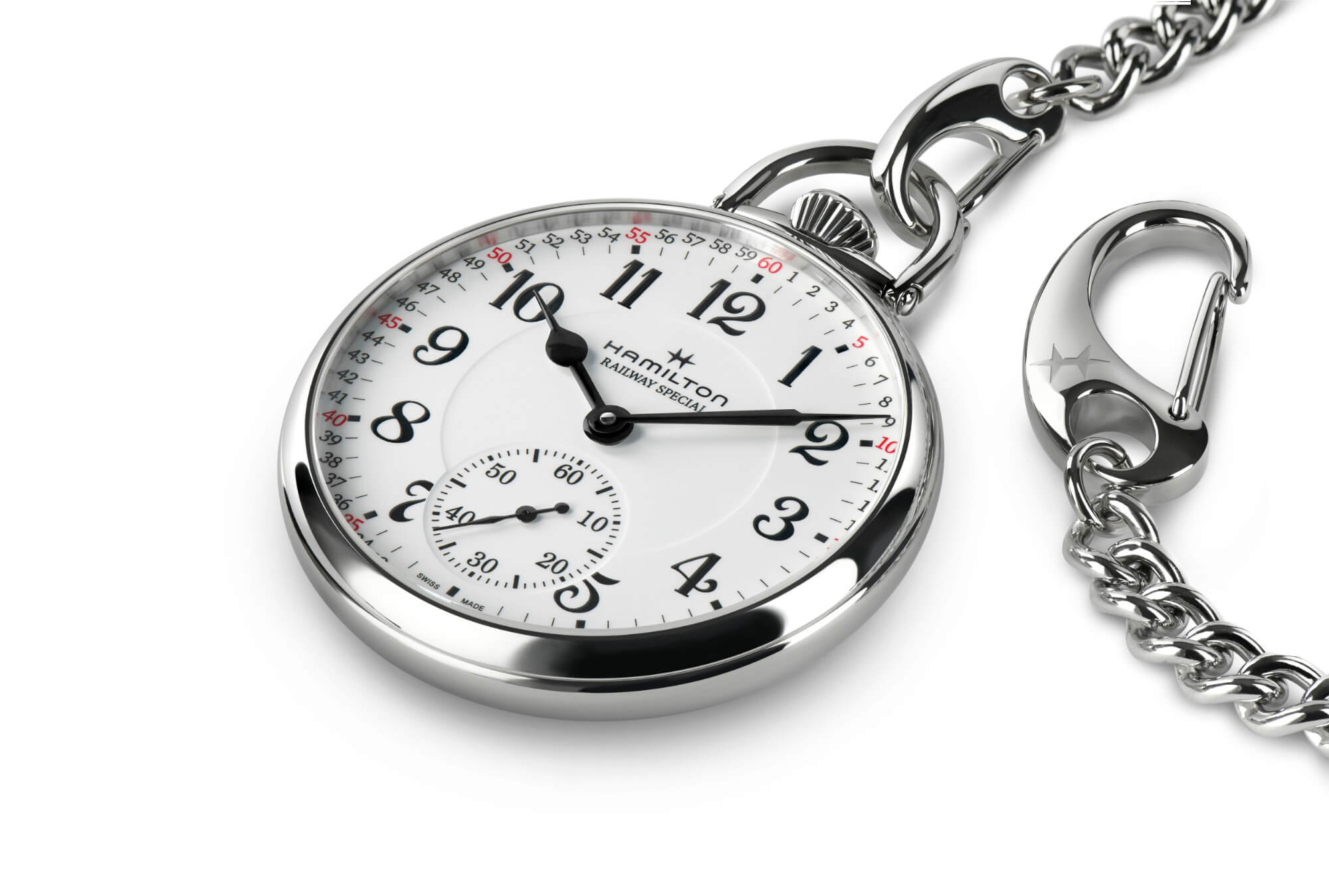 When you think about iconic American watch brands, one of the first that comes to mind is Hamilton — and with good reason. While the brand may boast Swiss Made chops now, its history is intrinsically linked to the story of American watchmaking. Founded in 1892 in Lancaster, PA, Hamilton has always been a leader in watchmaking, ushering in the popularity of wristwatches in the 1920s; producing the first battery-powered electric watch in 1957 with the Ventura; and in 1972, introducing the Pulsar, the first LED digital watch. But early on, the brand became popular making railroad pocket watches that helped keep the expanding American railway network running on time. It’s this part of its history that Hamilton has chosen to commemorate its 130th anniversary with the unexpected and utterly charming Hamilton Railroad Pocket Watch. 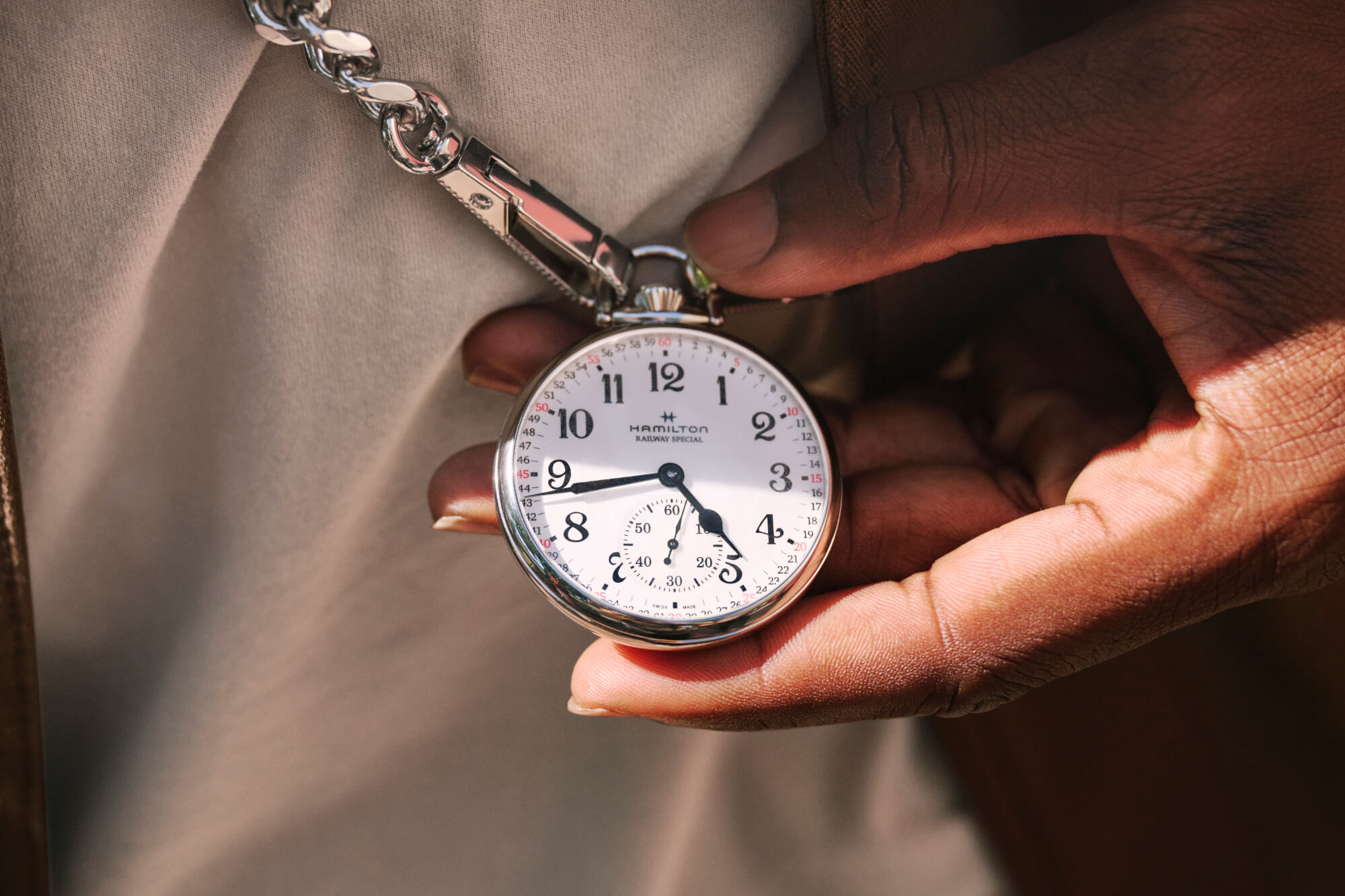 In the second half of the 1800s, America witnessed a rapid expansion in its railway system. By 1860, nearly every major American city in the Northeast and Midwest was connected by railroads, and in 1869, one could travel coast to coast by way of the first transcontinental railroad. While this breakneck branching of the rails catalyzed the economy of the American West, it was also a massive headache when it came to keeping time. Prior to the first large-scale set of standards, there were 144 time zones in North America; not a problem when traveling by wagon, which took days, but it could mean technically arriving before you left once rail travel proliferated. Worse yet, all the different railroad companies operated on different timetables and standards, resulting in a number of collisions. In 1883, though, the major railroad companies got together and established four coordinated time zones (which were expanded to five and adopted by the federal government in 1918). In the next few years, standards for watches used on railways evolved to describe the “railroad chronometer.” It was to these standards—which included adjustment in five positions and for temperature, a maximum deviation of 30 seconds per week, and the dial layout that is now so recognizable—that the earliest Hamilton pocket watches were made, with the company’s first movement, the Grade No. 936, specifically designed and manufactured to meet them. The new Hamilton Railway Pocket Watch is an homage to these early timekeepers that were critical to the safe, timely operation of America’s railroads. 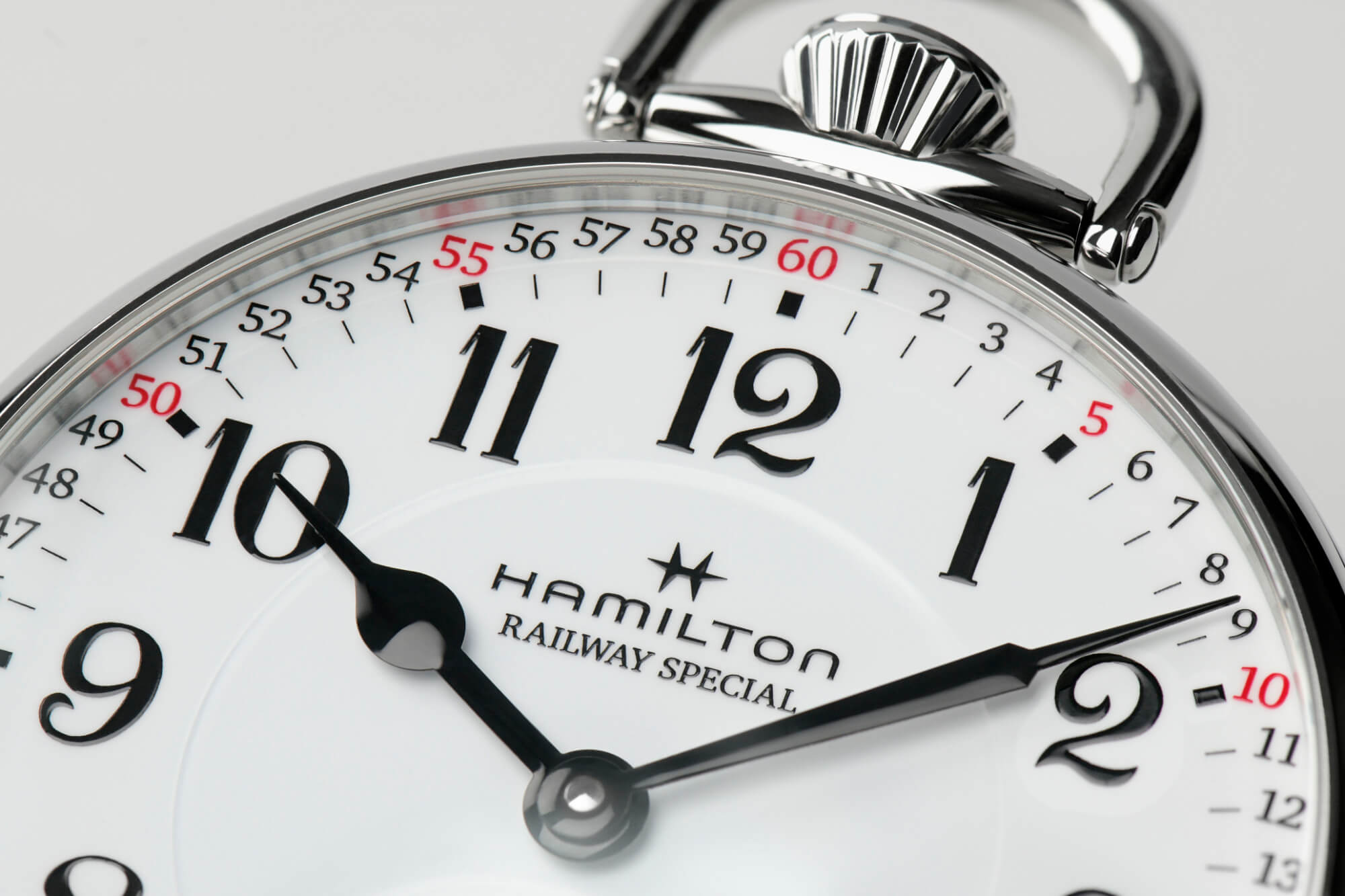 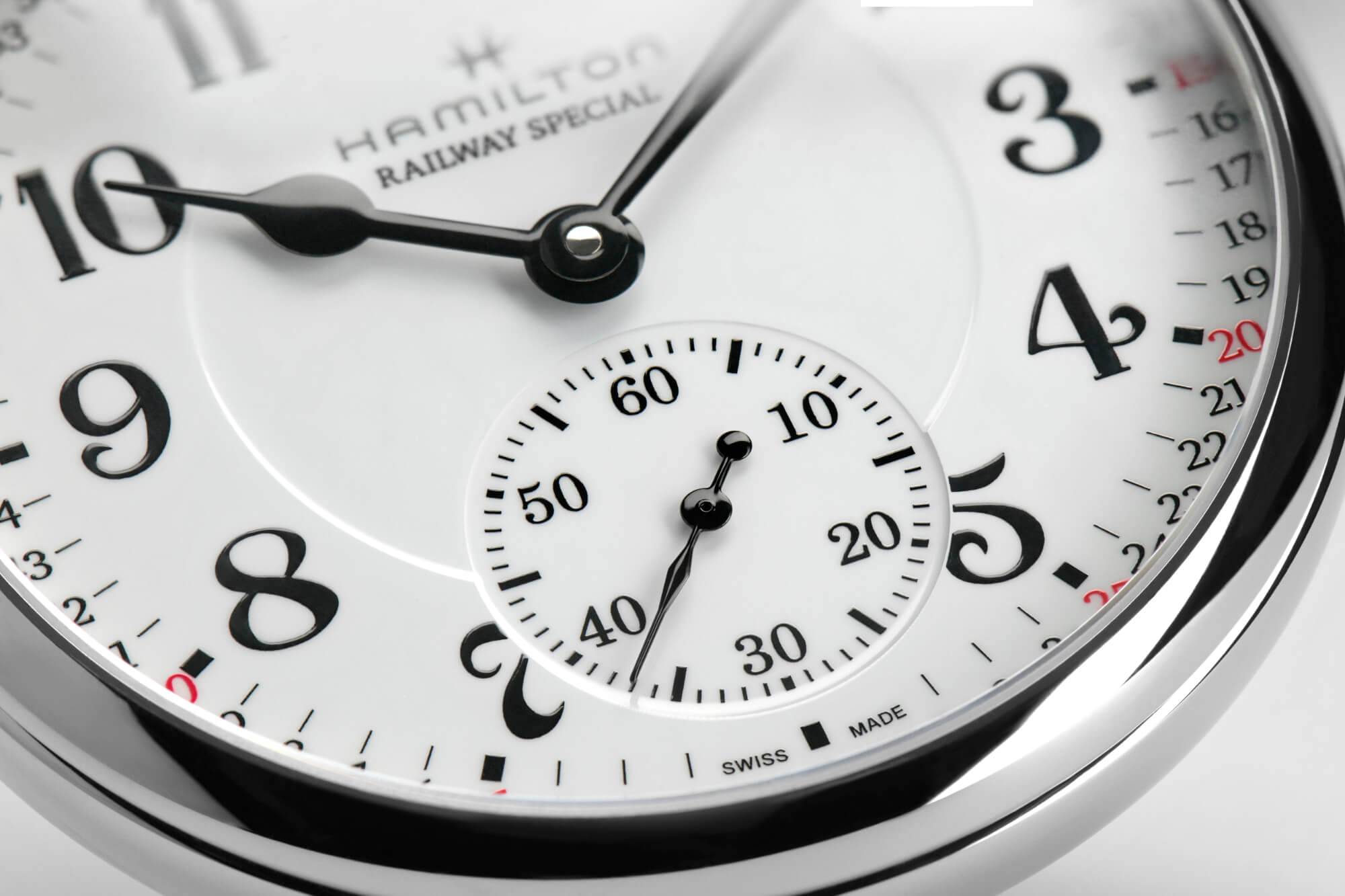 Railroad watch standards called for the dials to feature bold, legible Arabic numerals, outer minute division, a separate seconds dial, and heavy hands. That historical requirement informed the design of all railway watches and is the inspiration for the new Hamilton Railroad Pocket Watch. Under the curved sapphire crystal, the white enamel-like dial achieves striking legibility with its black and red markings. The dial features three steps: one for the main hour and minute track, one for the central dial with “Hamilton Railway Special,” and one for the subsidiary seconds. The markings are printed in black, with oversized vintage-inspired Arabic numerals and individual numbering of the minutes with the 5-minute intervals in red. This system of demarcations, with the tiered dial, allowed for easy, at-a-glance reading of the time for conductors operating trains across the United States. In this modern rendition, the dial recalls its origins and offers dimensionality with a pop of color on the outer edge. Perhaps most engaging are the lacquered spade-style handset, which has a shine that creates an aesthetic connection to the watch’s highly polished case. 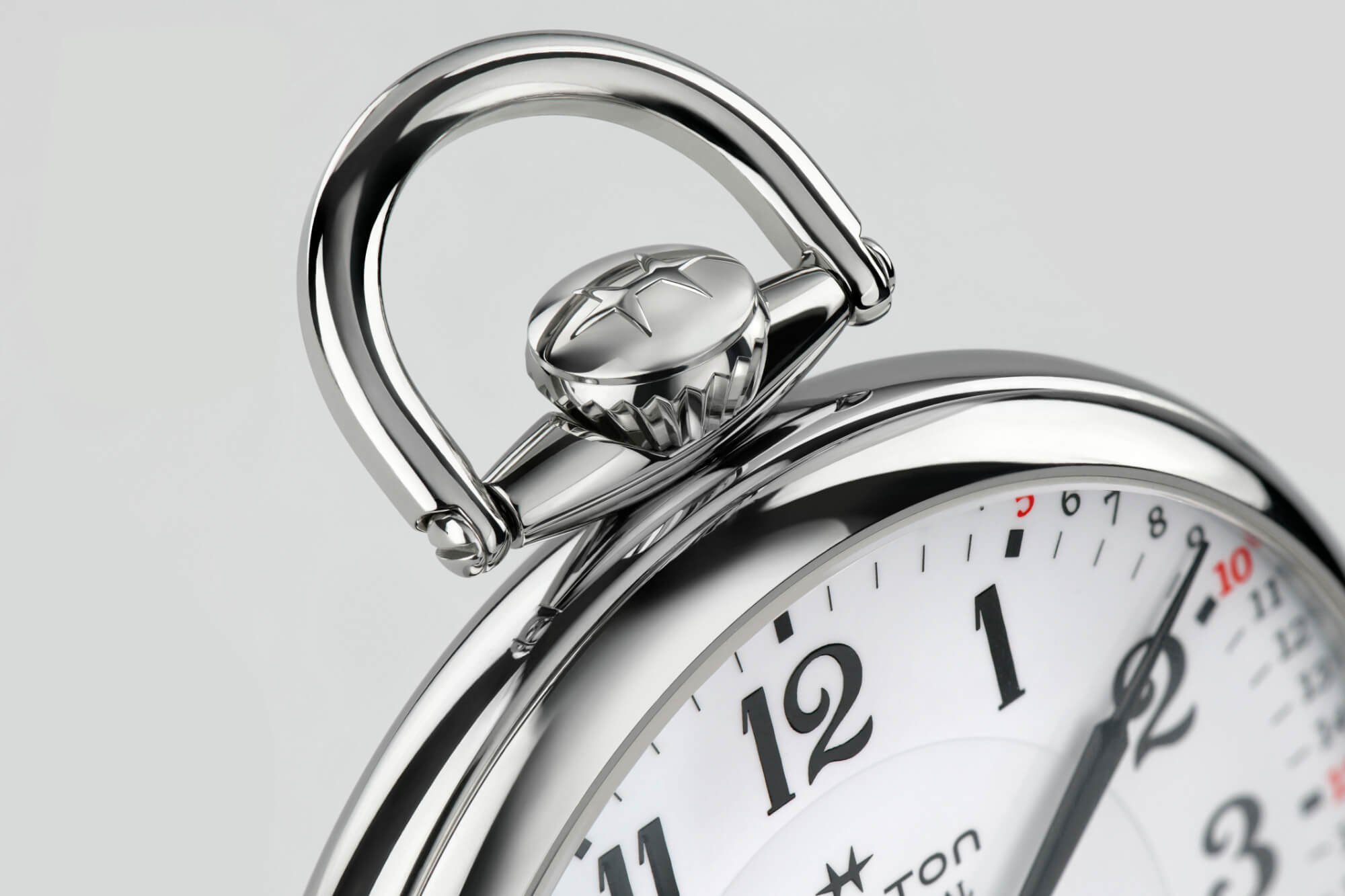 Original railroad watches were often rendered in gold, sometimes featuring elaborate scrolled engravings, sometimes simpler. The Hamilton Railroad Pocket Watch takes the latter path, with a polished stainless steel case that measures 50mm across and 11.95mm-thick. At the top of the case is the branded pull-out crown—though the watch features a solid 50m of water resistance—with pronounced fluting that allows for excellent grip and easy setting of the time. The crown is protected by a hinged bar to which the included steel chain can be attached; the other end can be linked to a jacket or belt loop. The caseback features a frosted engraving — a train with a prominent pilot (or “cow-catcher”) and the words “130th Anniversary Railway Special” arced around the surface. Within the train graphic, the limited edition numbering is printed. The watch is limited to 917 pieces, a nod to the original address of the Lancaster, PA factory at 917 Columbia Ave. 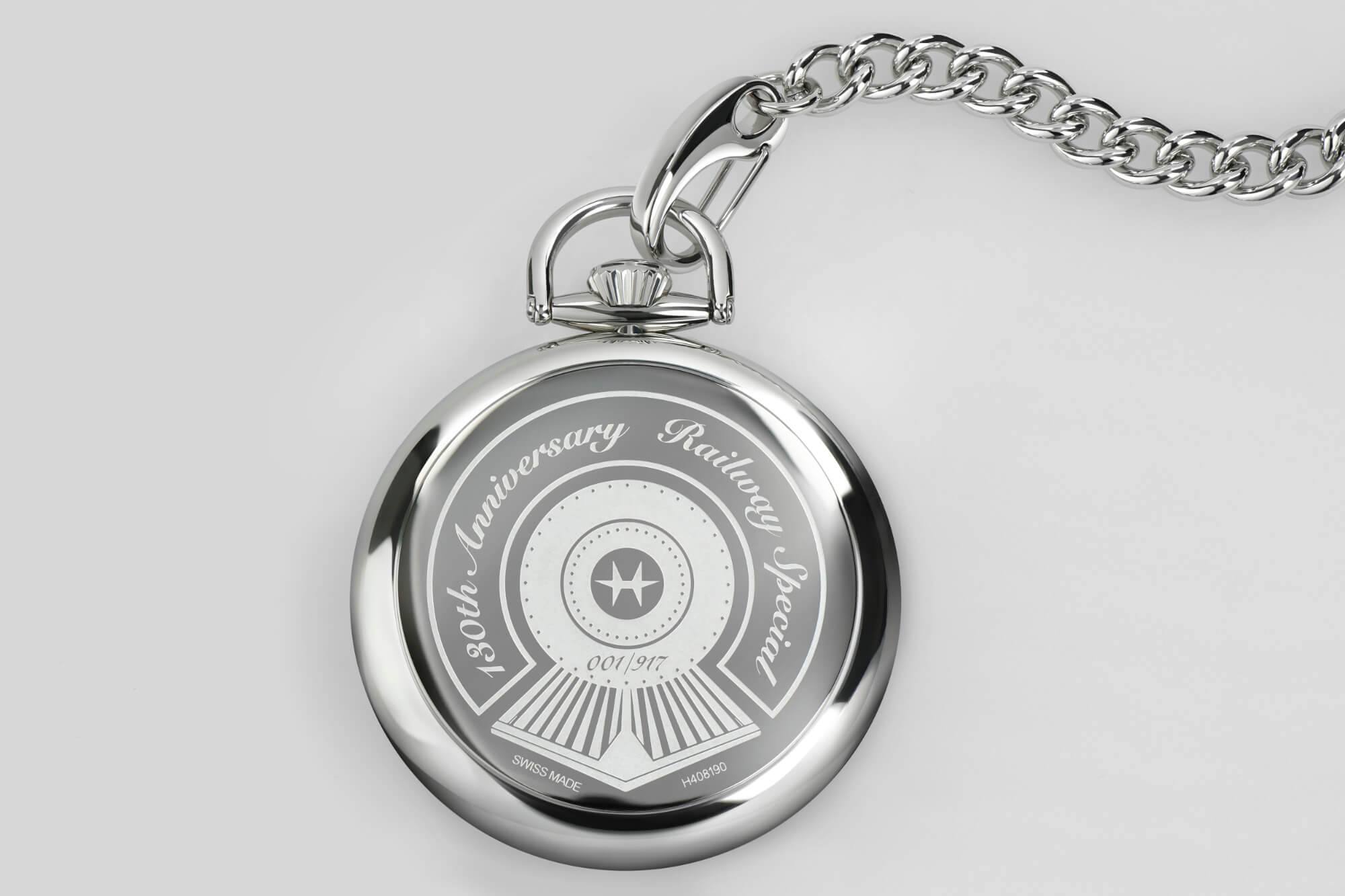 Hamilton has decided to keep the caseback closed and underneath is the modern ETA 6497. This hand-wound Swiss movement was originally used as a pocket watch movement when it was introduced in the 1960s, but these days it’s regularly used in wristwatches. Hamilton, however, opted to go back to the movement’s origins in using it in this model. The ETA 6497 features a 50-hour power reserve and 17 jewels. Using this movement has allowed Hamilton to remain as true as possible to the original designs of its railroad watches while offering a watch that benefits from the advances in watchmaking that have occurred since those pocket watches were produced. Completing the package, the watch is accompanied by a brown leather travel pouch with matched stitching and a snap closure. 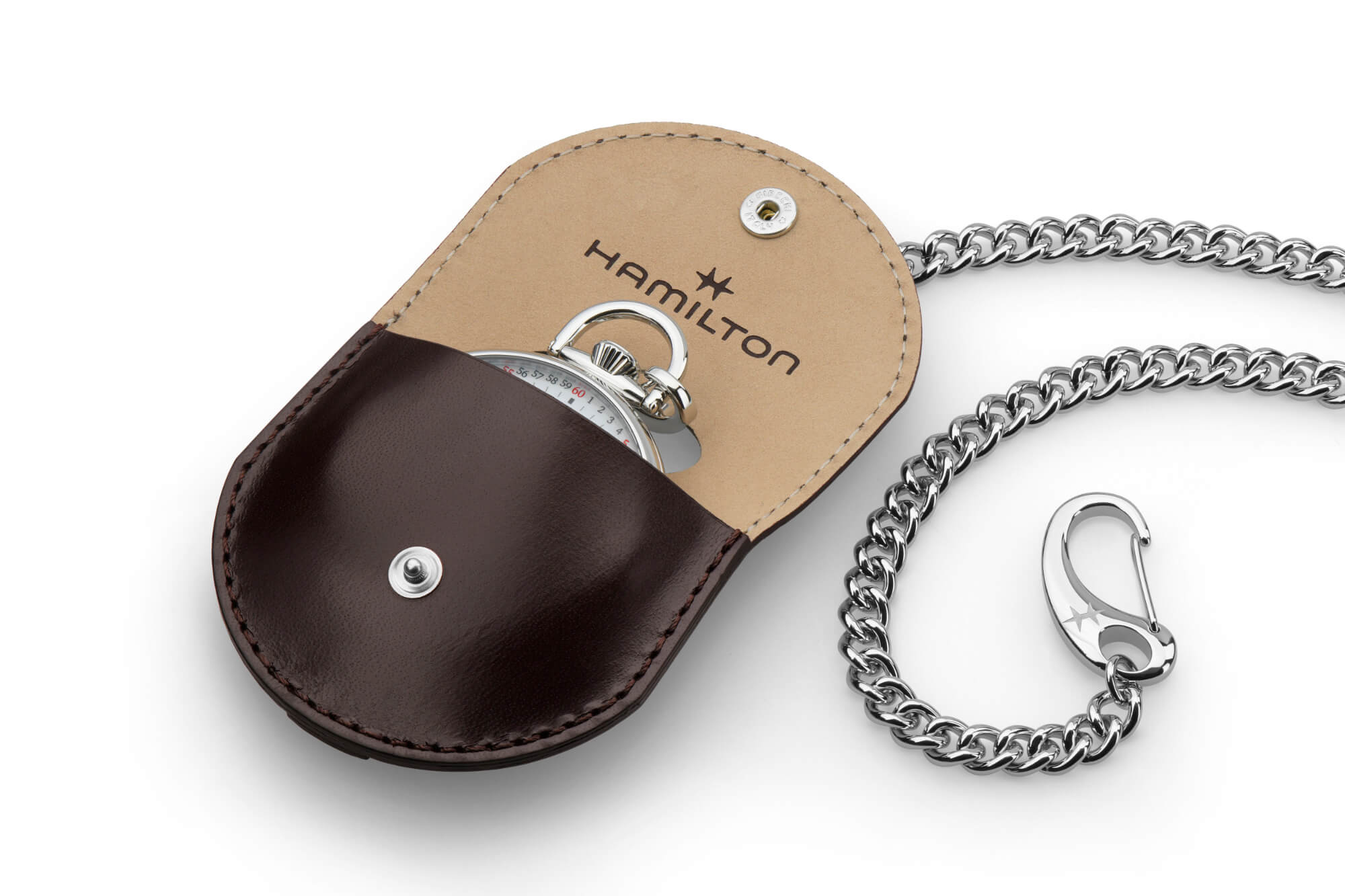 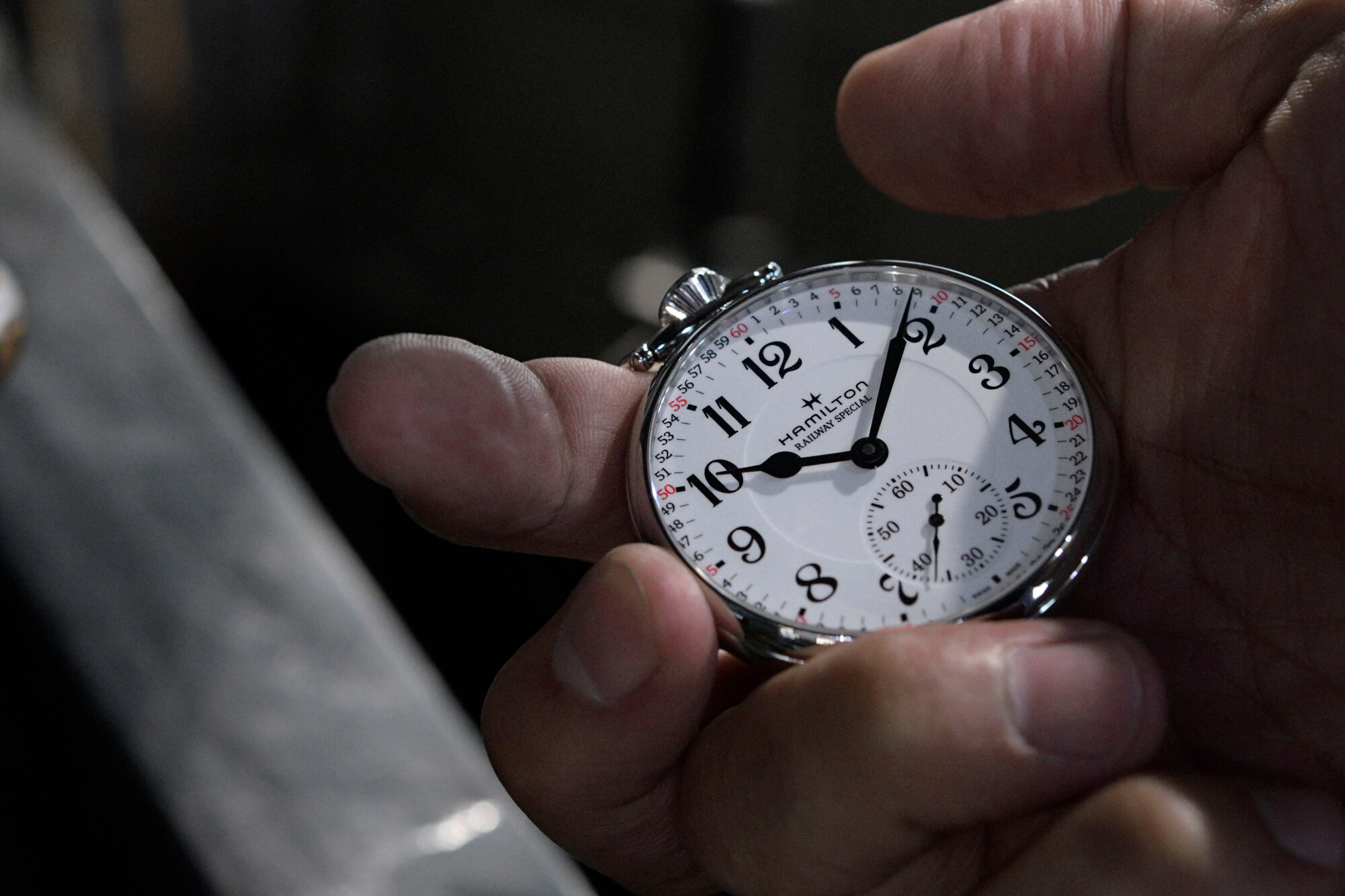 From a brand rooted so deeply in America and that forms a substantial part of the history of American watchmaking, the new Hamilton Railroad Pocket Watch is a fitting celebration. In recent years, Hamilton has made a concerted effort to look back into its catalog and celebrate some of its more iconic designs. This timepiece ups the ante, reaching back further to honor the brand’s foundation as a critical part of America’s timekeeping past. Consider it 130 years of exceptional watchmaking, right in the palm of your hand—or the pocket of your jacket. The Hamilton Railroad Pocket Watch is priced at $1,395. For more information, please visit the brand’s website.