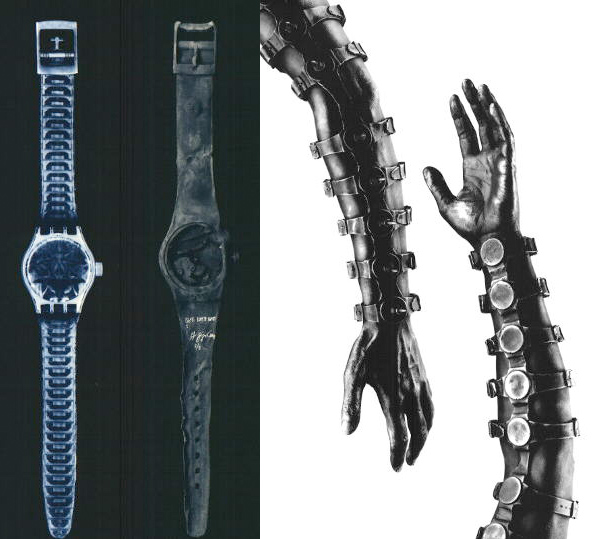 The H.R. Giger Take On Watches: He Loves Swatch Watches

Though stated in 1993, I doubt H.R. Giger has changed the way he feels about watches. “I will wear a Swatch, the real thing, from the cradle to the grave.” Best know for his macabre and dark industrial, future goth design style, Giger is probably most widely known for his design of the alien, in the Alien movies series. The fiendish, eye-less, dark and brooding brutal alien species is but one of a legacy of designs and characters imagined by Giger. A favorite approach of his is to take common industrial design and endow his own take on them. Fortunately for us, he has done this with the simplest of watches, the Swatch.

As part of an early 1990’s art exhibit, Giger used his love of the simplicity of the Swatch watch, and took it to another level. Though never commercially available, these designs are a wonderful depiction of how to incorporate the watch into a great and dark design theme. Notice how the watch in each design is the classic Swatch design. You can see more pictures of the Giger watch designs here.

Giger states that, “no one has seen me Swatch-less since 1982. A life with out Swatch for me, is unimaginable. It will be the only watch I wear until it falls off my wrist.” Morbid as Giger’s tone may be, it is nice to know he is a watch enthusiast and takes pride in the concept. He also comments on how he has been “grappling” with Swatch designs artistically. Meaning that it has been difficult for this normally agile artist to incorporate the Swatch watch into his artistic creations. Regardless, his works are thought provoking and recognizable. He takes the utilitarian simplicity of the Swatch design and multiplies it to create a pattern. This is the most effective way of amplifying the aesthetic value in something simple and functional. 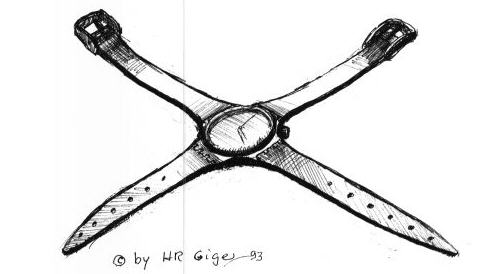 A favorite of mine is Giger’s “Crosswatch” which take a Swatch watch and crosses the straps. While simple, it is not an obvious use of the straps and results in making the friendly Swatch far more Gothic in character. Though not the pinnacle of utilitarian, I am surprised not to see other watches that incorporates this strap crossing idea. The weave pattern created would no doubt incorporate well with the right outfit. Giger certainly does not disappoint with his art, my only dismay that they may never be commercially available as functional watches. Giger impresses with his take on the most recognizable watches around.