SIHH 2018 sees the Royal Oak brand release a ton of new Audemars Piguet watches. We have picked three here before we cover them hands-on: two belong to the highly exclusive Concept range with a new and refreshing ladies’ piece drizzled with diamonds, and a very dark and aggressive looking men’s variant with a mysterious pusher in its side. Along with these come a record-extra-thin automatic perpetual calendar model with, rather shockingly, a blue dial. There are also three new Offshore models that we have already covered here. 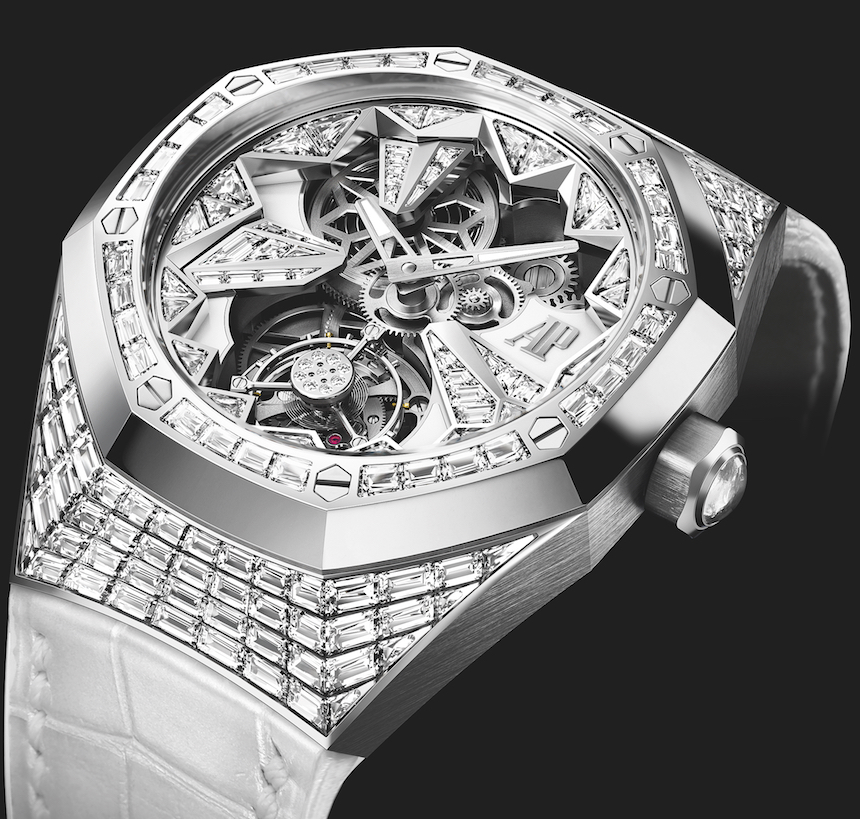 Last year was a big year for Audemars Piguet as, after the dust had settled on SIHH 2017, it dawned on us that apart from one – as in, one – high-jewelry ladies’ concept watch, every single watch they debuted was a Royal Oak or Royal Oak Offshore. This year, we are promised to see some new stuff – we already got news of a few new Millenary pieces that look like they are from 2011… or 2005. Though, some more finishes and materials might come to what for a number of years has proven to be a design dead-end. 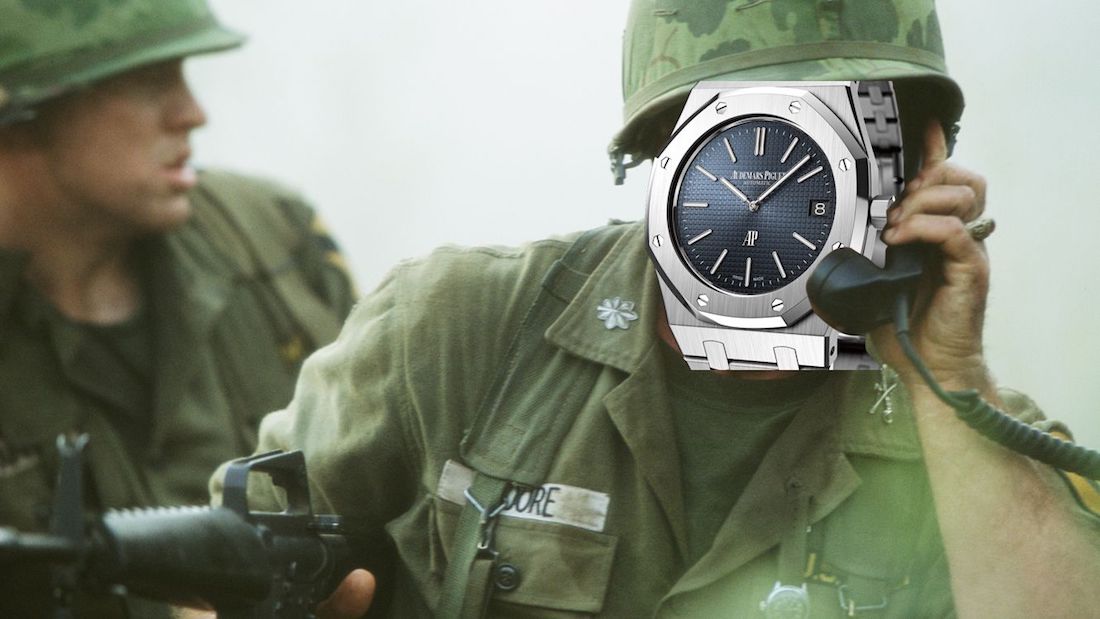 A heroic scene from 2003’s “Worst Foreign Film” Yoga award-winner We Were Soldiers.

No joke, the brand calls its new watches “OUR HEROES” – which sounds eerily fitting when you picture a single entity (the Royal Oak, with the poor thing having so many skins ripped off it) carrying the entire brand on its shoulders. If anything, I’d much rather see young watchmakers, designers, and engineers be called heroes, but Audemars Piguet isn’t unique in crediting the product and the product only – it is in line with industry practices. 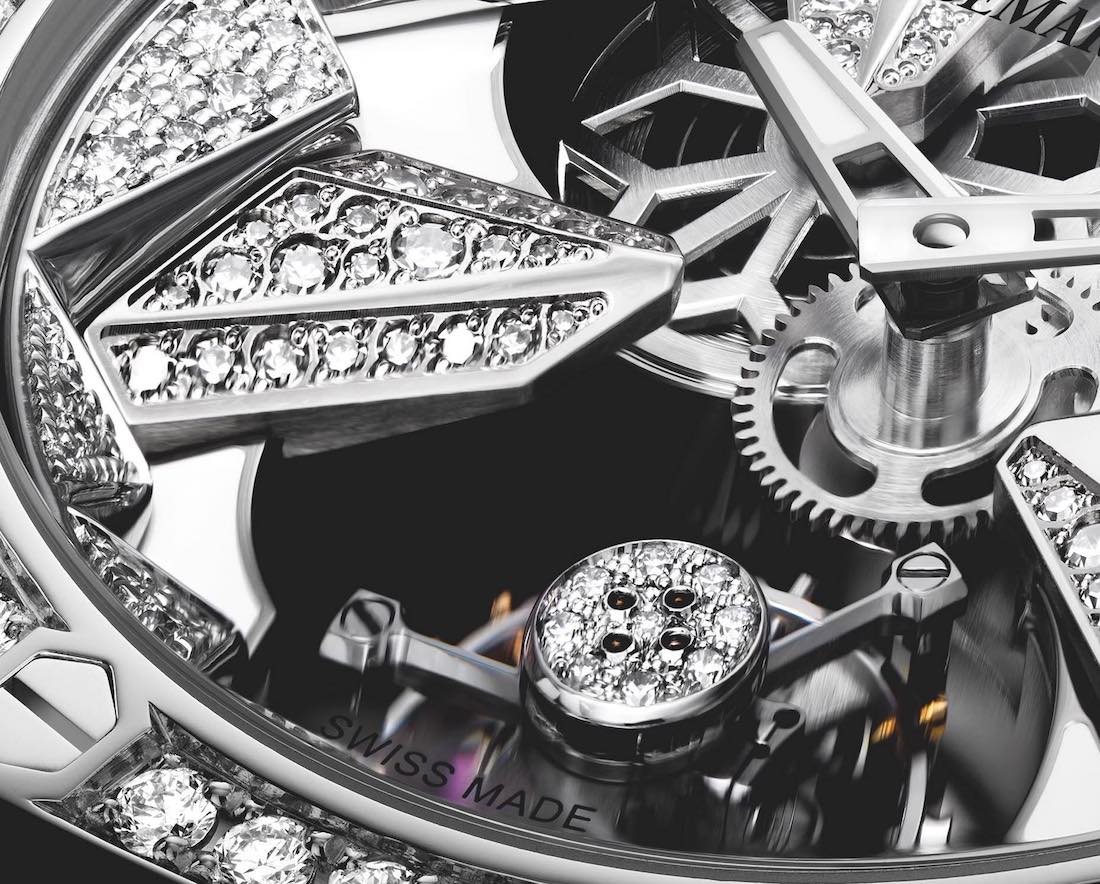 On a personal note regarding not just AP but the approach of the majority of brands, I still find it ironic how such a compact industry wants to present products literally as though they just fell out of the open skies. Having visited countless small and large manufactures, the thing is that basically all “iconic” (I have actually developed a nervous twitch for this word) watches and models and complications and collections that you see are the brainchild of one, but never more than a very small group of people. I guess they have accepted it long ago that their work will always be swallowed by a thousand year old brand without any credit given to them specifically. 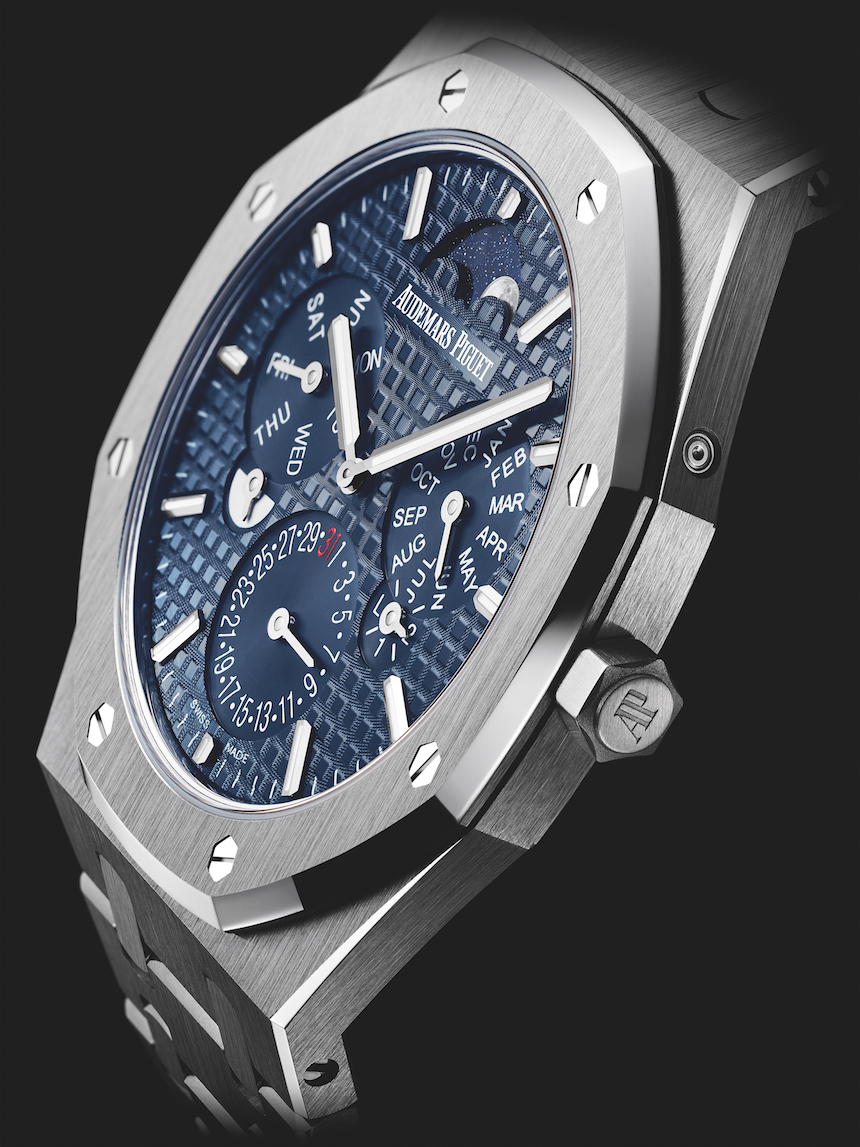 Anyhow, here’s something interesting for you: Audemars Piguet say they have “reinvented the calendar watch” with the Royal Oak RD#2 Perpetual Calendar Ultra-Thin. I might have called it extra-thin further above – how foolish of me.

The engineering that went into the RD#2 is highly impressive if all you care about is thinness in a watch. The automatic Audemars Piguet Calibre 5133 is a “record-shattering” 2.89mm thin, 32.00mm wide and contains 256 parts in total. The challenge was to re-engineer a three-tier movement into a single level while “combining and re-arranging functions to boost ergonomy, efficiency, and robustness.” The brand says this patented system “features a record-shattering 2.89mm central rotor” though I imagine that to be a typo of some sort. 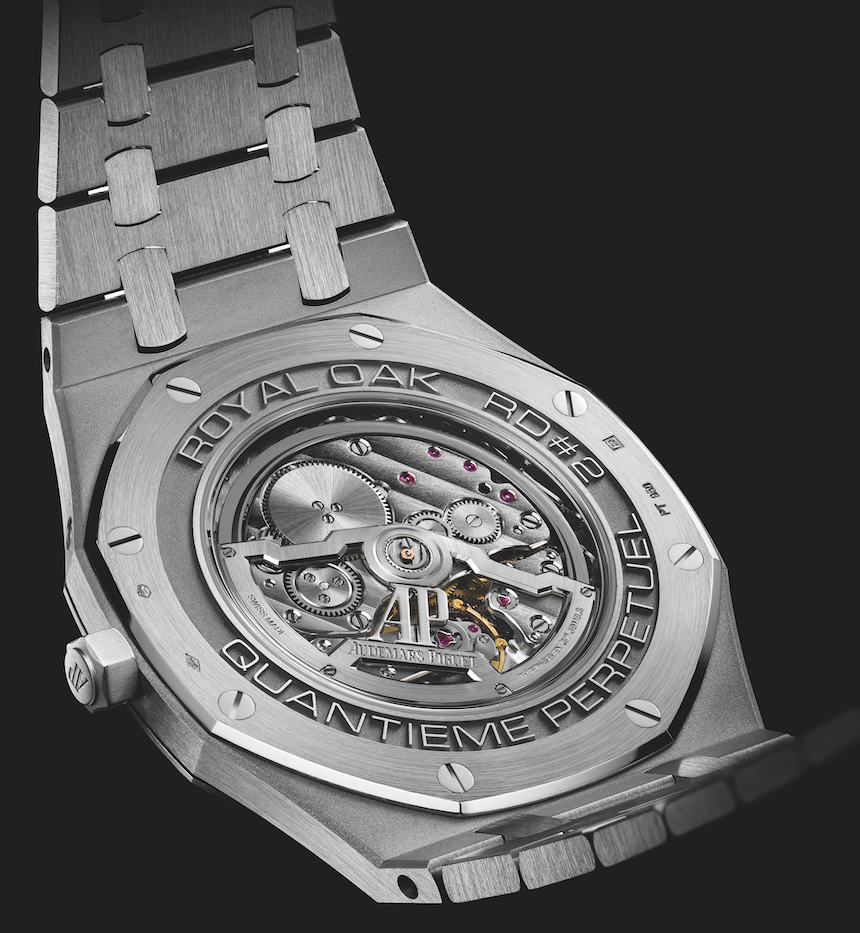 There is “no compromise on quality,” which in the brand’s mind equals a 40-hour power reserve and a 2.75Hz operating frequency. Though the thinner a case, generally the more comfortable to wear it is. At this point I’d trade a few millimeters in favor of seeing the corrector pushers be gone from all luxury annual and perpetual calendars. I just don’t find anything “heroic” or luxury in taking a pen to fiddle with these pushers every time the 40-hour power reserve runs down. Water resistance is also a basically useless 20m. 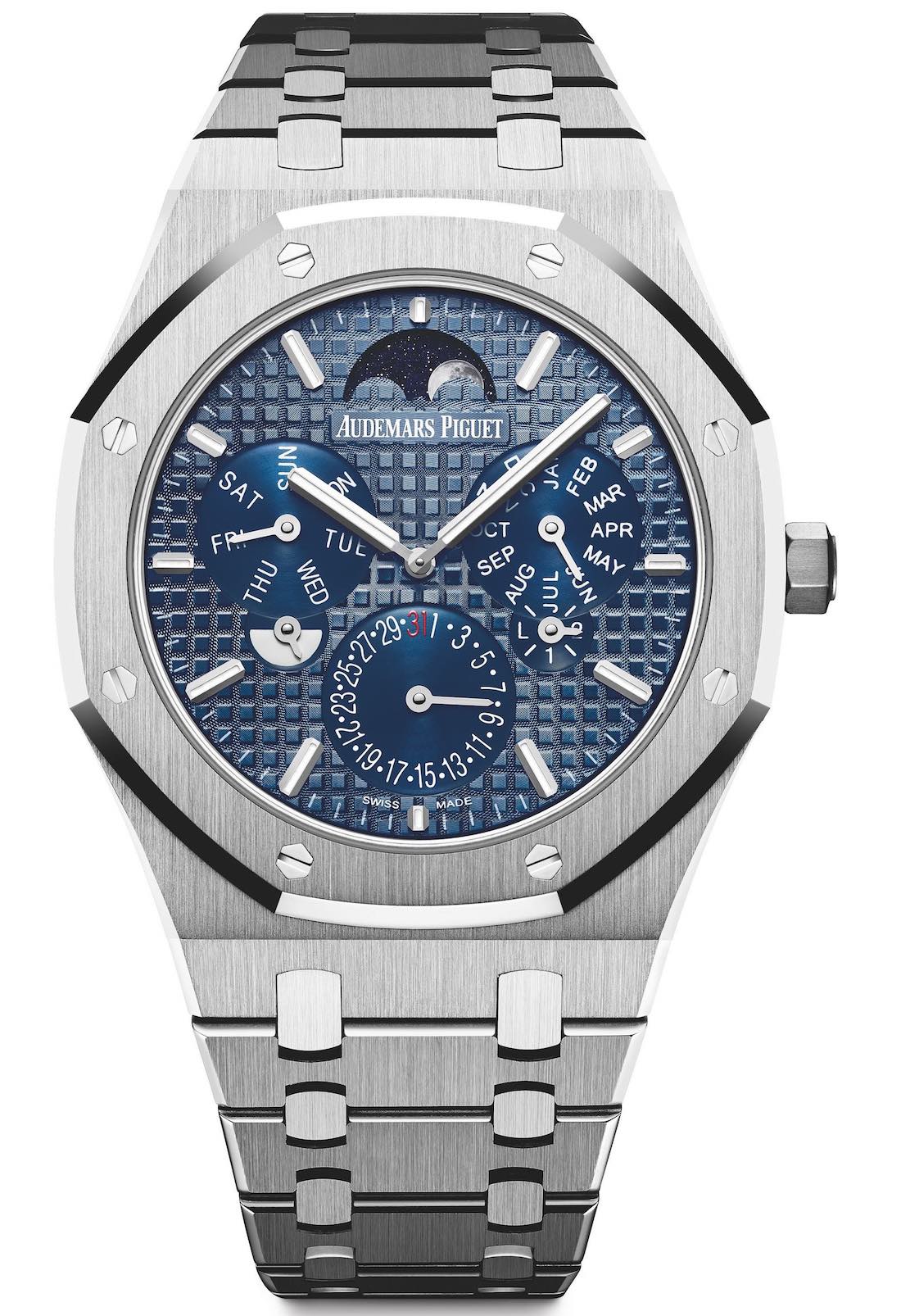 All cased up, the Audemars Piguet Royal Oak RD#2 Perpetual Calendar Ultra-Thin measures just 6.30mm thick. That’s almost 2mm off the Royal Oak Extra-Thin Jumbo, making the RD#2 “the thinnest self-winding perpetual calendar on the market today.” It’s refreshing to see something in a dressy form factor pushing the envelope. The case is 41mm wide – I imagine not something that will please the purists – and is crafted from 950 platinum. The RD#2 is thin, yes, but it’ll have plenty of heft to it on the wrist.

All in all, this is one fascinating movement wrapped into the love it or hate it 41mm Royal Oak case and a blue dial that resembles the relatively unpopular Royal Oak Dual Times of old. I’d love to chat with the engineers who managed to squeeze 256 parts into a 32mm by 2.89mm space as much as with those who think the Royal Oak looks good in 41. 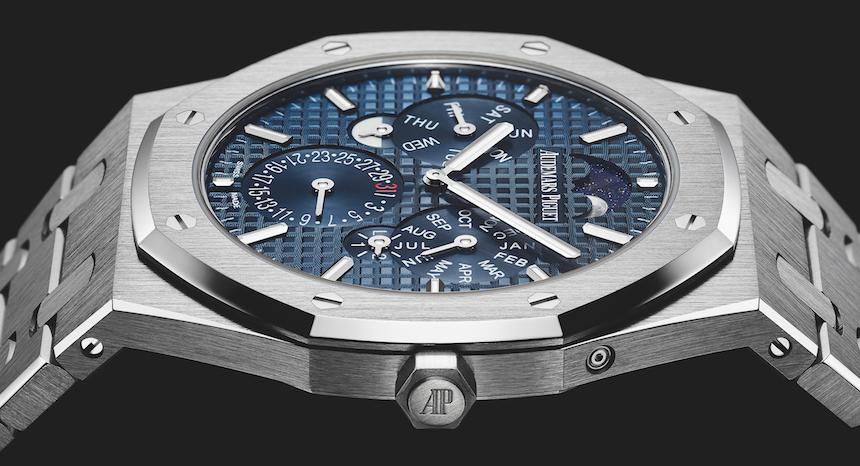 Last, if you were wondering what RD#2 is doing in the name of this watch, it goes back to the 2014 RD#1, a research piece that gave us the Royal Oak Supersonnerie (hands-on here). Apparently, AP didn’t want to see this RD# thing gone and it’s true it helps separate a particularly new and advanced model from the rest.