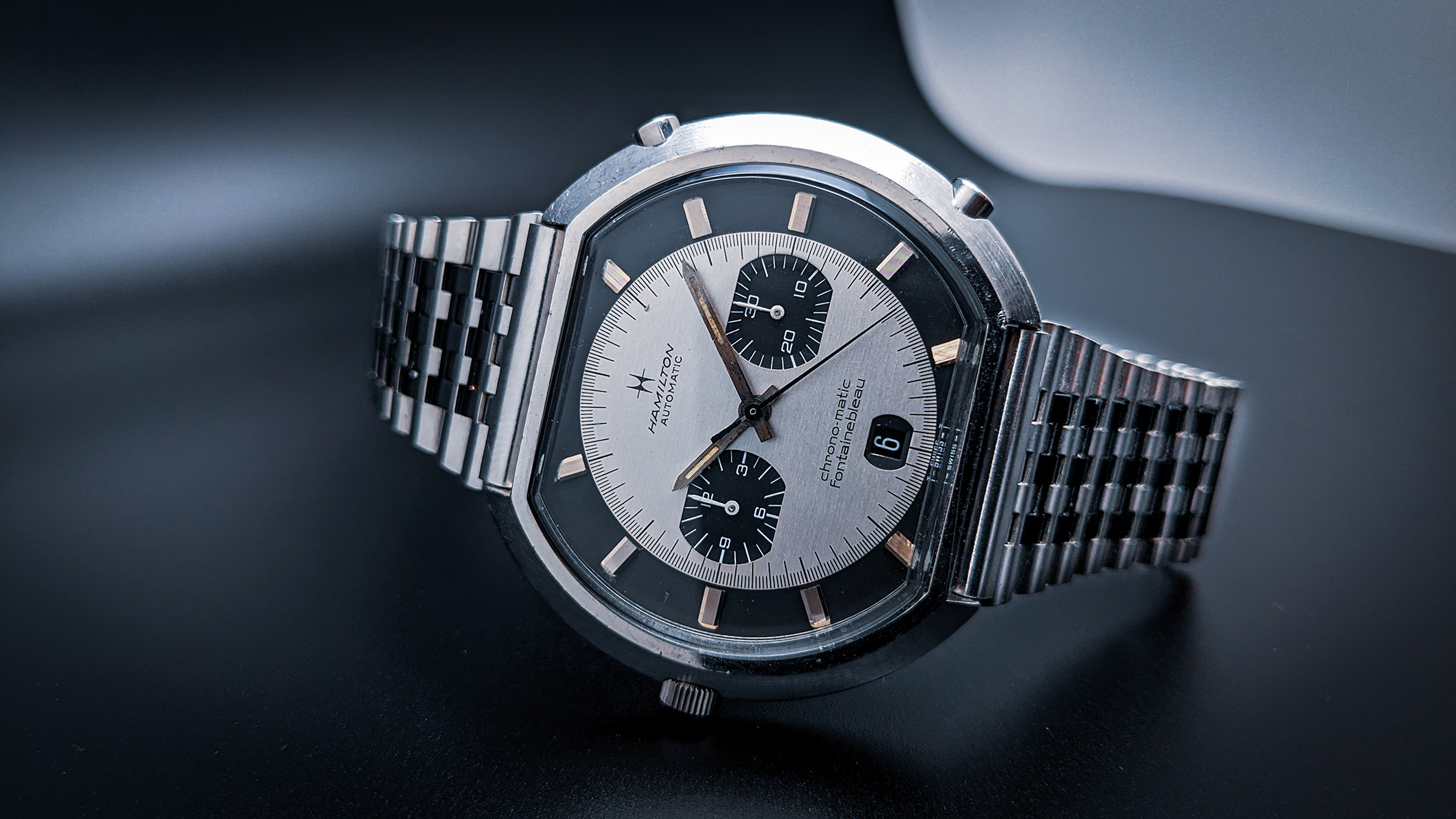 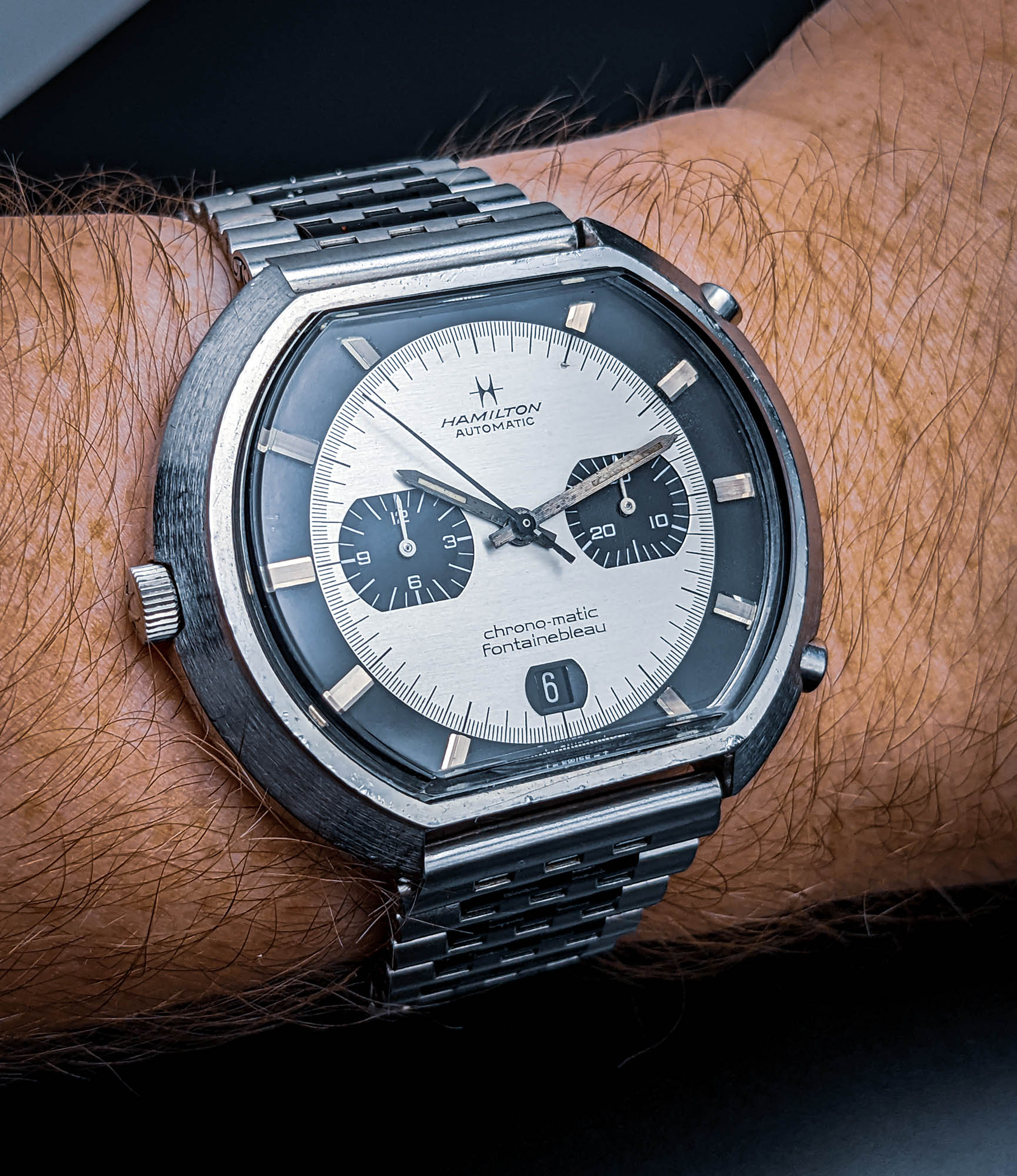 Perhaps the greatest struggle in creating a futuristic design is that the future is a constantly moving target. Whether one is designing a watch, a car, a chair, or a building, what might look cutting-edge today will almost certainly not reflect what the vision of the future will be five years from now. Because of this, many enthusiasts tend toward more conservative, “timeless” styles, but many of the most intriguing concepts arise when a designer’s vision of the future has staying power far beyond the context of its creation. There are flashes of this in the current watch market, with brands like MB&F recontextualizing concepts from the swoopy, chrome-laden 1930s vision of the future with its experimental haute horlogerie designs. In my own opinion, however, nothing matches the vibrant, optimistic, and deeply stylized allure of the Space Age design movement of the ‘60s and early ‘70s, and perhaps no other watch better encapsulates the look and feel of this school of design better than this circa-1970 Hamilton Fontainebleau.

Image courtesy of Arts and Collections

Space Age design can trace its roots back to the late ‘50s when designers such as Eero Saarinen began to experiment with the (at the time) cutting-edge plastic and metal materials developed as a byproduct of the Space Race. These materials were combined with rounded, Pop Art-esque forms and striking primary color palettes to create a stark departure from the jet-inspired, chrome-trim futurism of the preceding decade. By the mid-‘60s, the style had come into its own, with interior designers like Eero Arnio, Joe Colombo, Peter Ghyczy, Verner Panton, and Raphael Raffel, automotive designers including Bill Mitchell and Marcello Gandini, fashion houses such as Pierre Cardin, and popular entertainment from “Star Trek” to the 007 franchise working together to influence a uniquely splashy vision of things to come. Watch brands were eager to jump on this stylistic movement, as well, but perhaps no other watchmaker embraced the look as thoroughly as Hamilton. 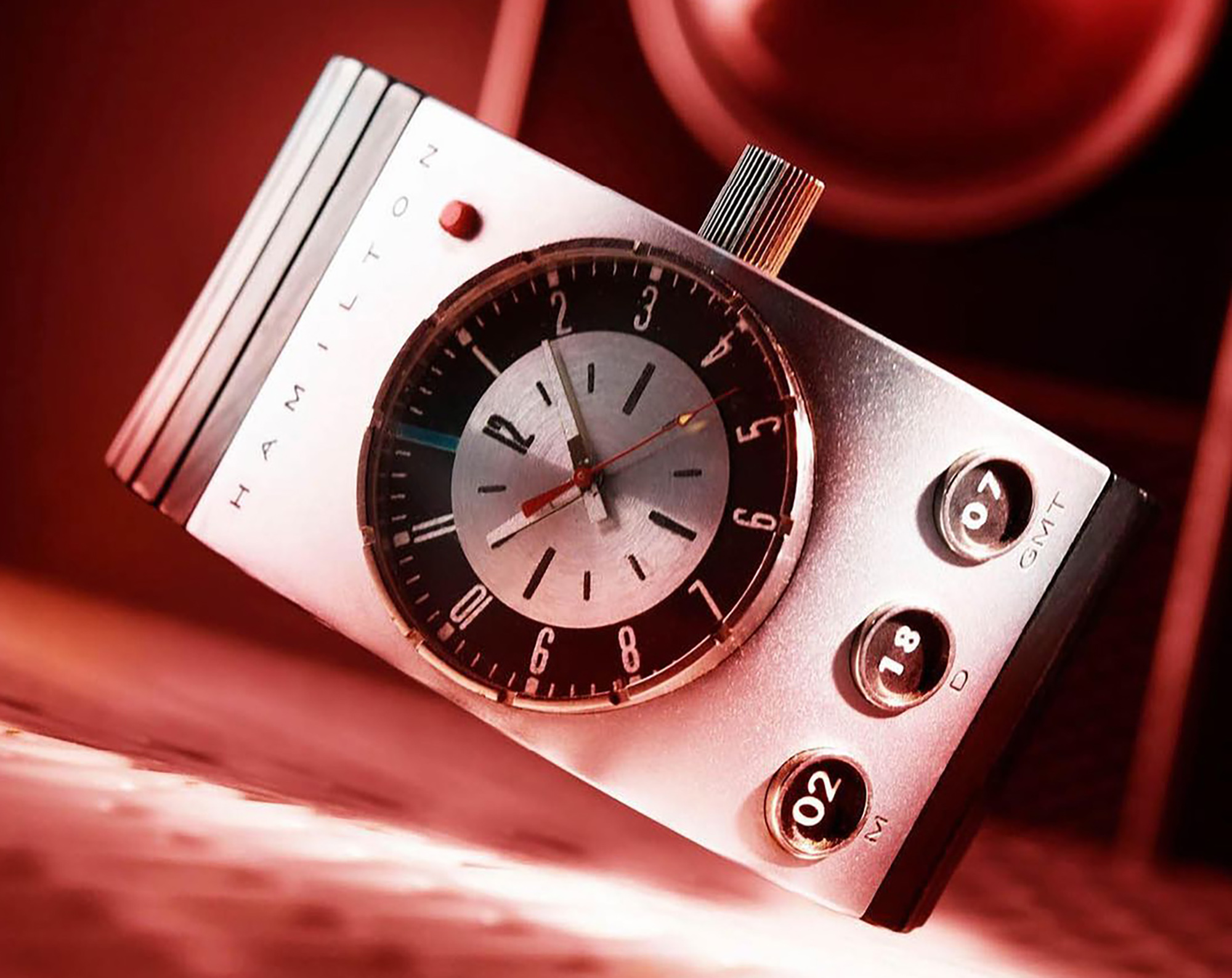 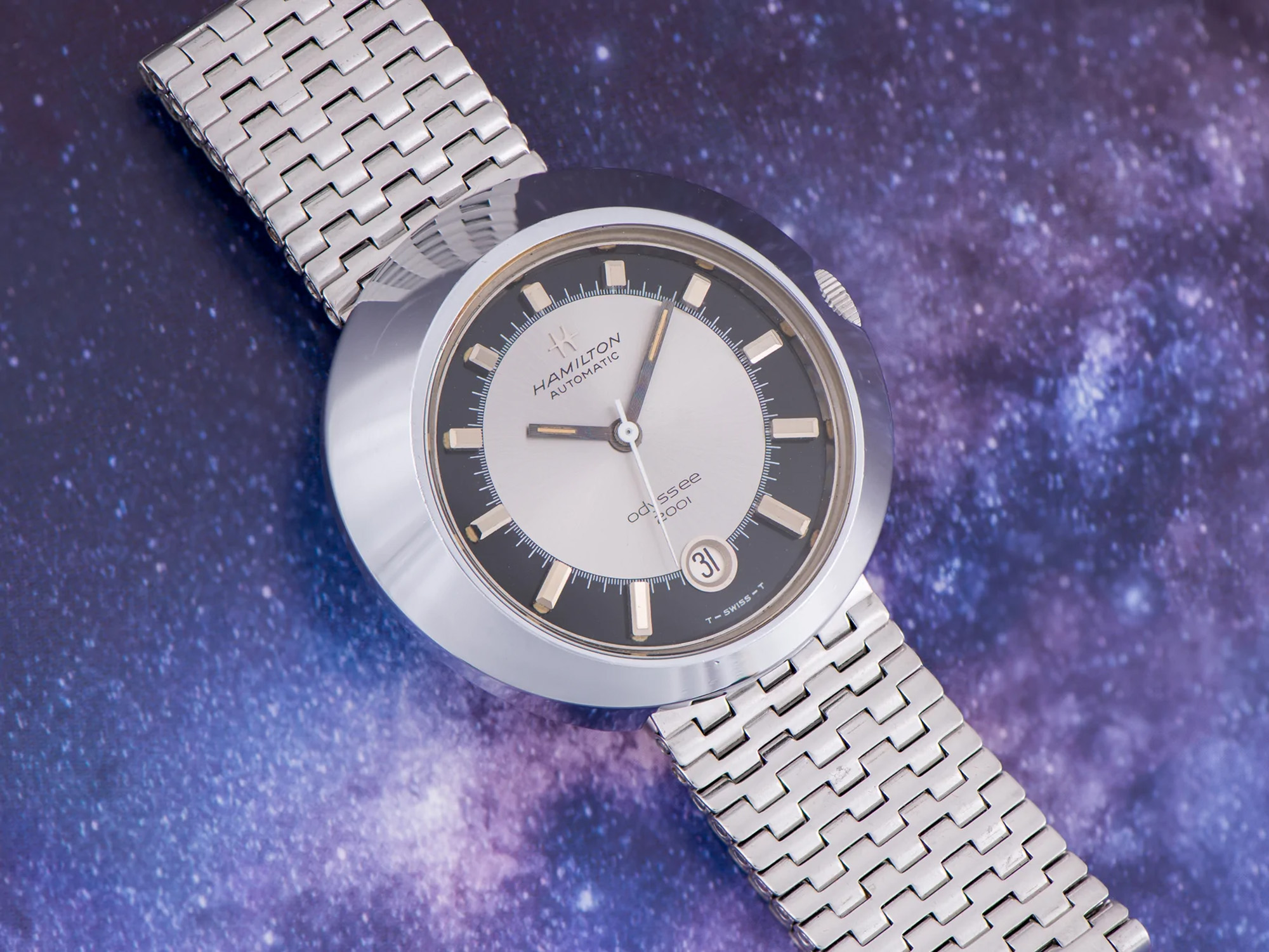 Image courtesy of Unwind In Time

In the late ‘60s, Hamilton was in a state of flux. The historic American brand was in the midst of a gradual transition from its traditional location in Lancaster, Pennsylvania to Bienne, Switzerland, and its position in the industry was shifting as it acquired the Buren brand in 1966. It also formed a (historically underappreciated) part of the Project 99 Consortium with Heuer, Breitling, and Dubois-Dépraz, contributing to the joint effort to develop the (arguably) world’s first automatic chronograph movement, the Calibre 11/Chronomatic. All this rapid change led to a creative environment ripe for experimentation, and Hamilton was eager to push forward with a new avant-garde visual language. This new corporate attitude was given a chance to shine on the global stage in 1968 when Hamilton was approached by legendary filmmaker Stanley Kubrick to develop a concept timepiece for 2001: A Space Odyssey. Although the cuff-style five-time-zone design was featured in the film’s iconic space station scene alongside other Space Age design icons like the bright red Artifort Djinn Chair, the watch itself was far beyond the manufacturing capacity of the late ‘60s and Hamilton instead capitalized on the film appearance with the different, but no less futuristic, Odyssee 2001 three-hander. 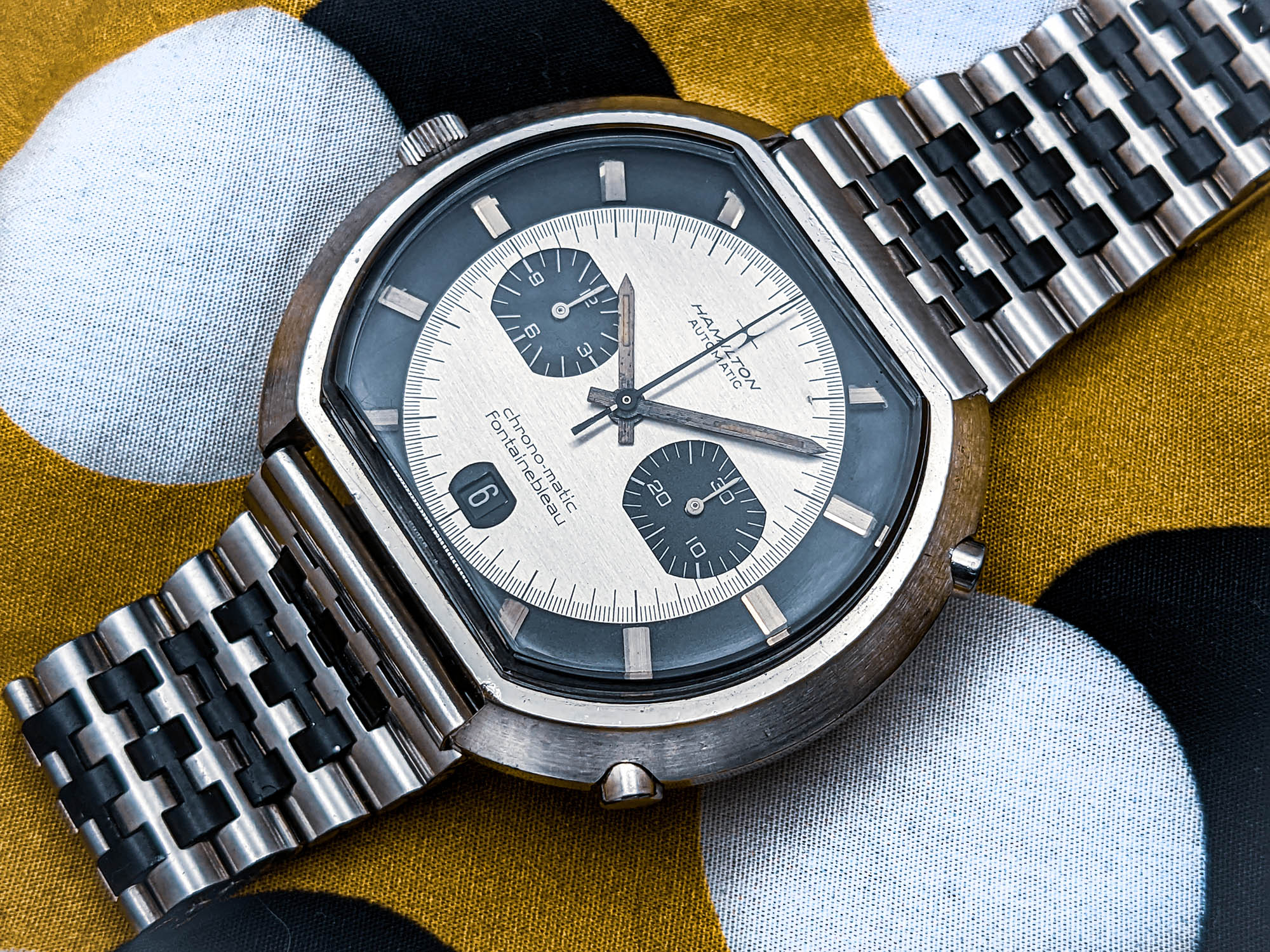 Given how cutting-edge the Calibre 11/Chronomatic movement was upon its debut in 1969, showcasing it with an equally state-of-the-art watch design was a natural move. Heuer, of course, approached its part of the design challenge with the emblematic square-cased Monaco, but Hamilton turned to the Odyssee 2001 for its inspiration. Hamilton designer Ulrich Nydegger combined the silver main dial, black outer dial surface, and wide-faceted indices with an even wilder oval shape, inspired by the famous French palace of Fontainebleau (as well as the newly built and similarly shaped Fontainebleau Hotel in Miami). The resulting watch would feel just as home in the Pan Am spaceport lounge of 2001: A Space Odyssey as it did in the watch market of the late ‘60s and early ‘70s, and it remains one of the most striking wearing experiences for any vintage chronograph. 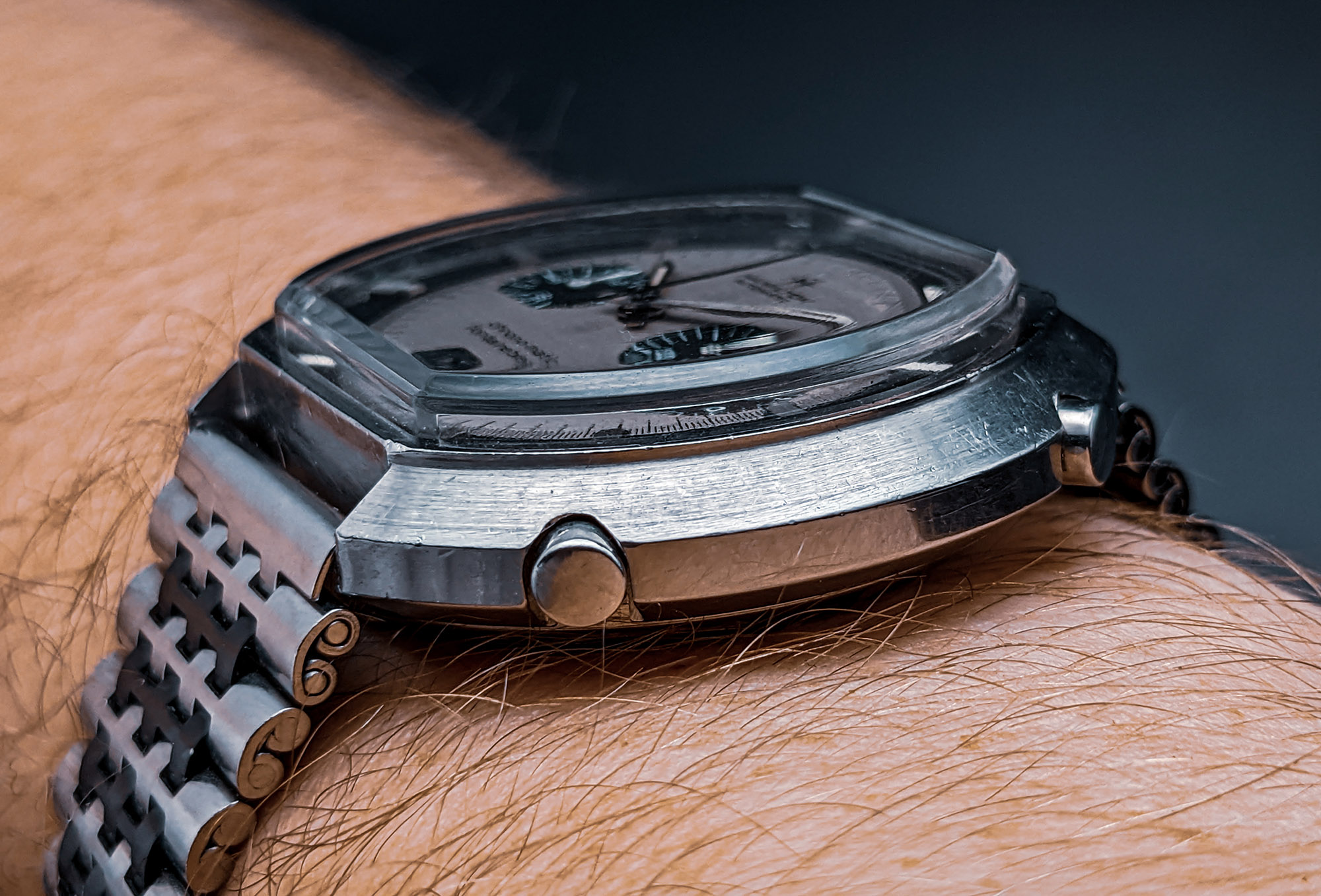 Although the Hamilton Fontainebleau’s stainless steel case seems imposingly large on paper at 47mm-wide and 14mm-thick, in reality, the watch wears impressively well due to its scant 40mm lug-to-lug distance. There are few other cases that combine this mix of big-watch wrist presence and small-watch comfort so effectively, and the tapering flying saucer-style side profile ensures that much of the case thickness is hidden on the wrist, as well. 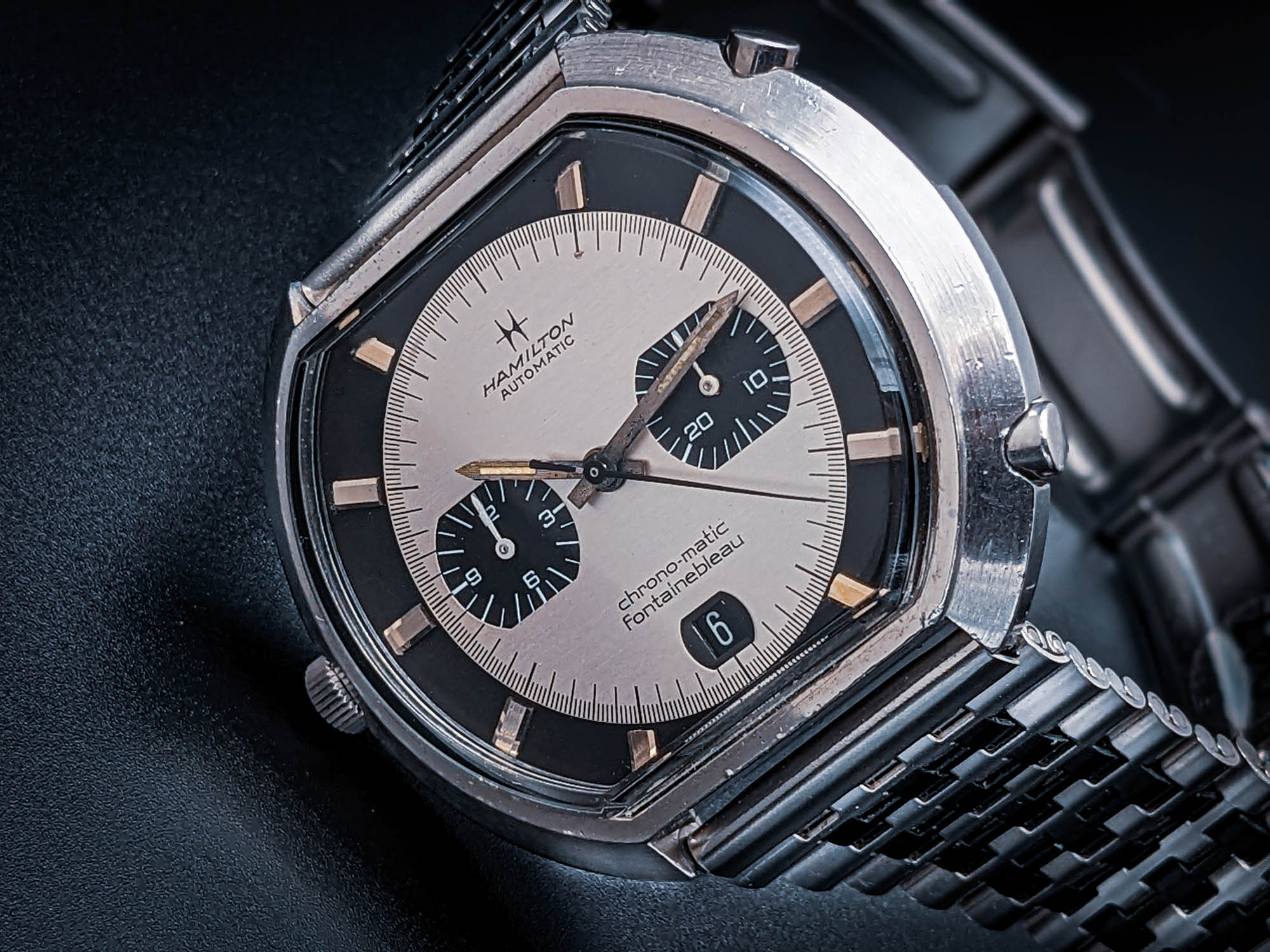 But the dial is where the Hamilton Fontainebleau truly shines. Naturally, the concept of fitting a circular main dial inside a non-circular case is not unique to this design, and other Calibre 11/Chronomatic models such as the Heuer Monaco approached the challenge with a similar philosophy. What sets the Fontainebleau apart in this regard is just how clearly it emphasizes the difference between the case and dial forms. Where the original Monaco strives to blend the area between the dial and the rehaut with continuous use of color and long horizontal indices, the Fontainebleau’s panda dial colorway and heavy, brightly polished faceted indices seem to celebrate the visual dichotomy here. The silver main dial surface itself features deep horizontal brushing, giving it a distinctly metallic feel on the wrist and imbuing the surface with a myriad of highlights and lowlights at different viewing angles. The decision to echo the truncated oval bezel shape through the chronograph subdials and the 6 o’clock date window works to give the design a cohesive, offbeat look, just as the heavy ribbed texture of the pointed baton handset smartly harmonizes with the brushed silver dial surface. 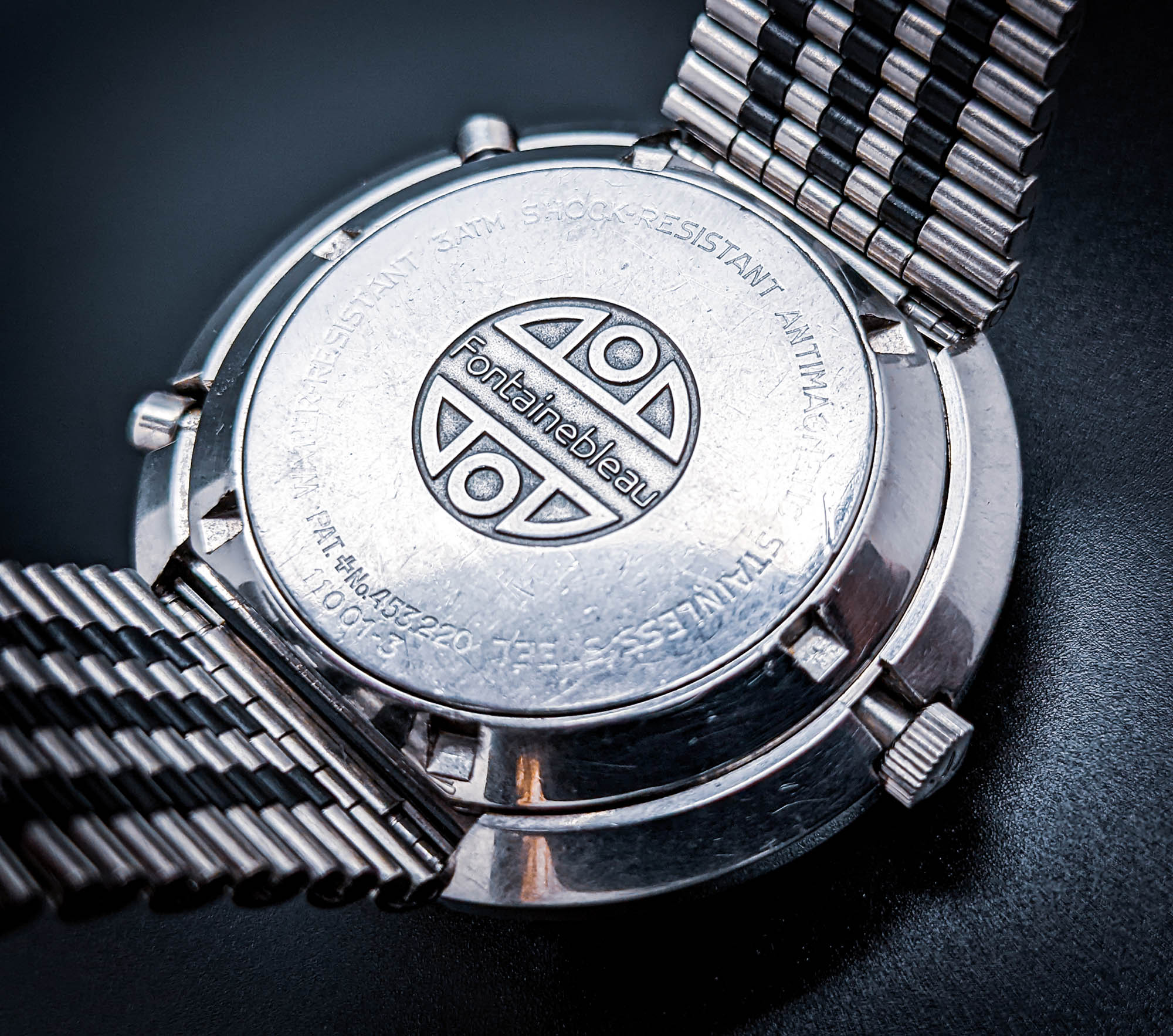 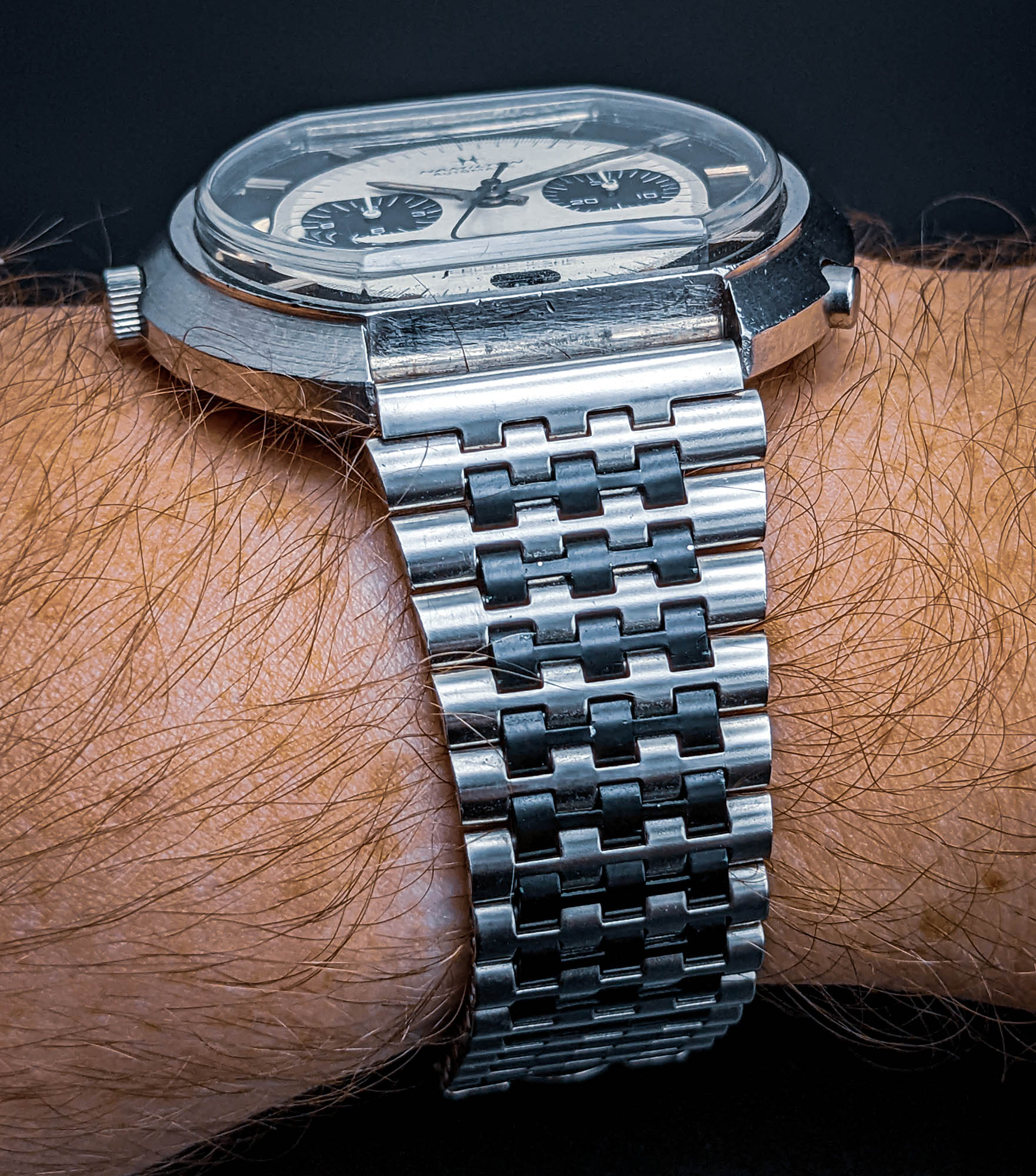 This particular Hamilton Fontainebleau is fitted with a period-correct, new old-stock bracelet from NSA, featuring a unique set of black center links. Although this bracelet was never offered by Hamilton, this semigloss black and brushed steel two-tone pattern smartly echoes the panda dial layout, while its tapering form flows surprisingly well into the oval lines of the case body. 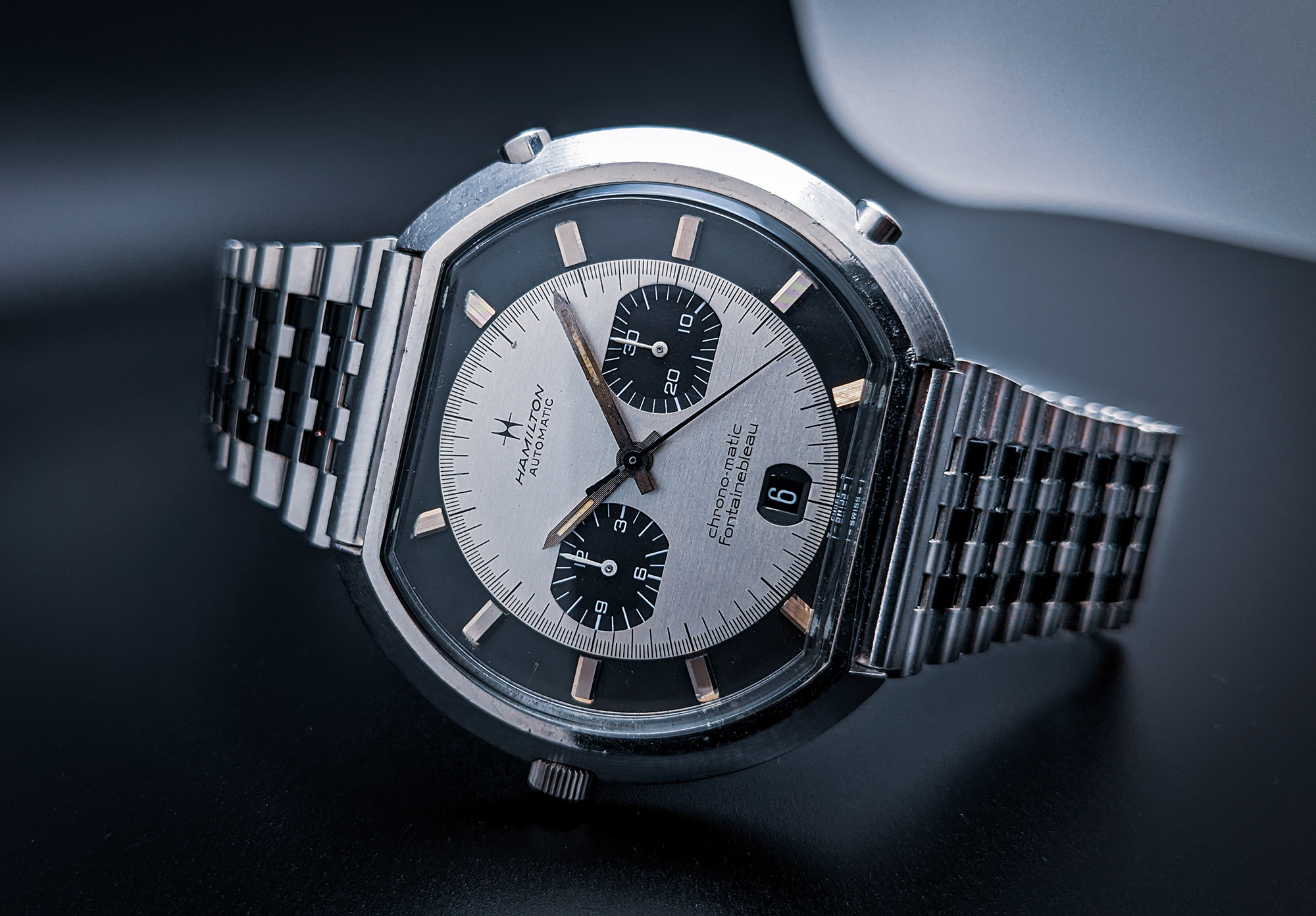 All in all, the Hamilton Fontainebleau is an impressively charismatic piece of avant-garde Space Age watchmaking that might well stand alongside some of the icons of this wild, often overlooked era of industrial design. It may be far from the best known or the most valuable of the Calibre 11/Chronomatic family of timepieces, but it carries a dramatic, funky retro-futuristic vision of its own that might well inspire us all to broaden our horizons and take a trip back to when the future was stylized and optimistic.