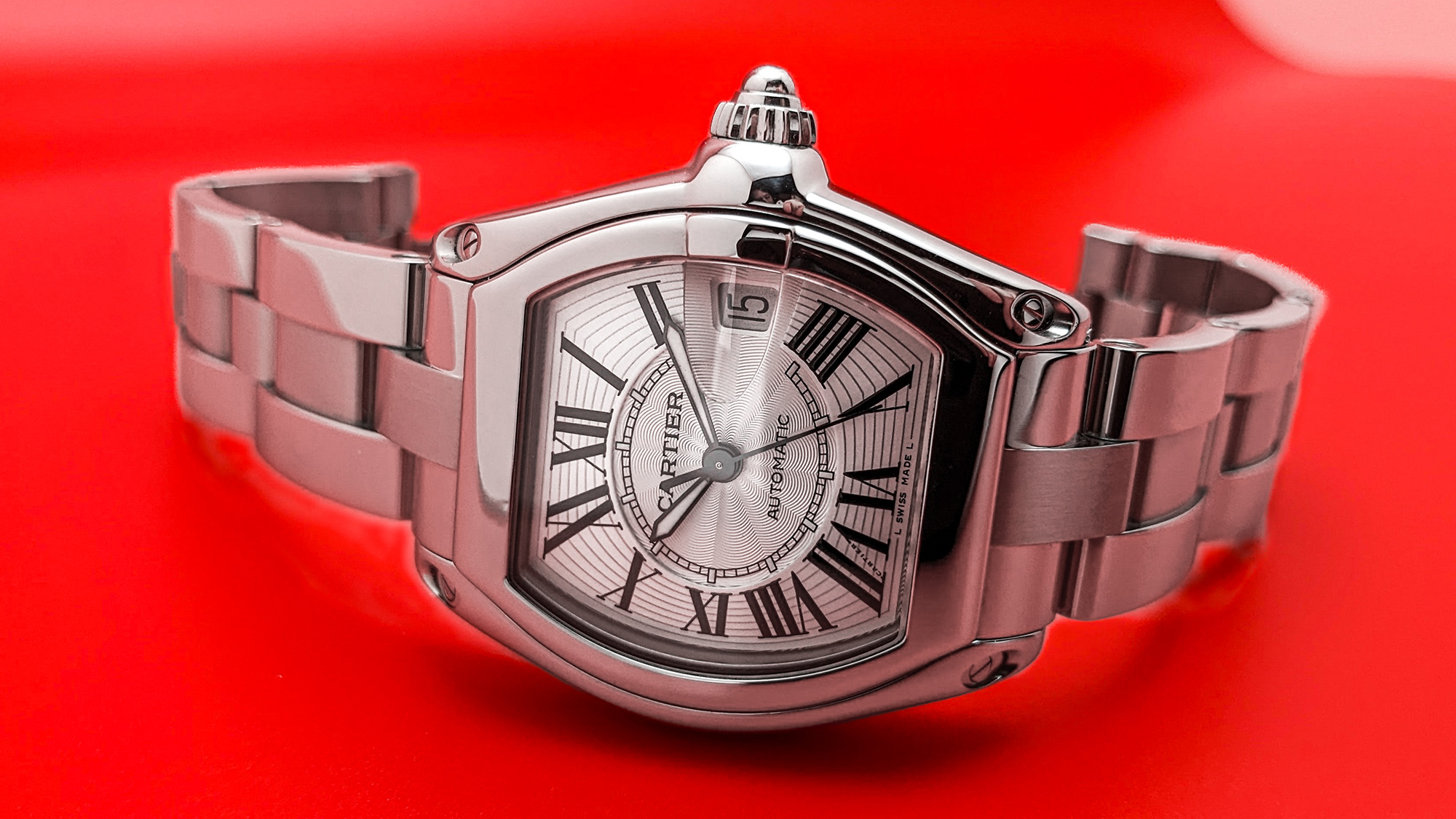 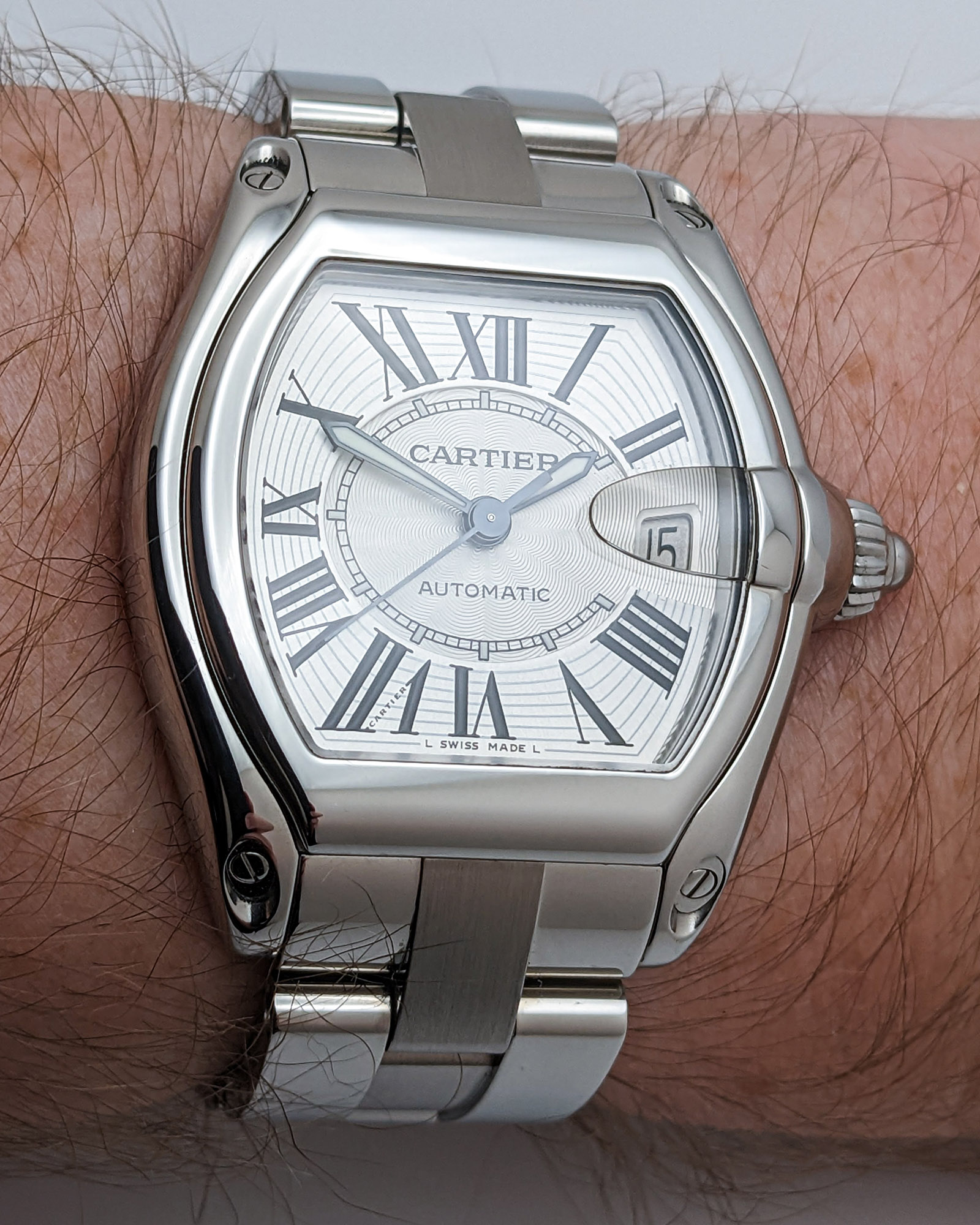 It should be no secret to those who know my work that I’m a car guy, at heart. For as much as I love watches and the community that surrounds them, cars were my first passion, and I’ve been lucky enough in my life to spend much of my life surrounded by them. I’ve worked as an automotive photographer, been a public relations representative for numerous luxury car brands and aftermarket manufacturers, promoted vintage racing events and hot rod shows, and even co-hosted a television series about the history of the automotive industry. With this in mind, it’s no great shock that my own personal taste in watches carries a strong automotive streak. Over years of collecting, however, it has become clear that watches trying to capture the spirit of the car hobby come in a handful of flavors largely aimed at capturing the look and spirit of various eras of European circuit racing. Watches that actually capture the aesthetic and feel of the car enthusiast lifestyle off the racetrack — that revel in the minute details, the stylistic flourishes, and the emotional feel of a particular style and era of automotive manufacturing — are few and far between, however. That’s one of many reasons the Cartier Roadster is a standout, both among the French brand’s prolific watch lineup and in the larger “automotive watch” genre. 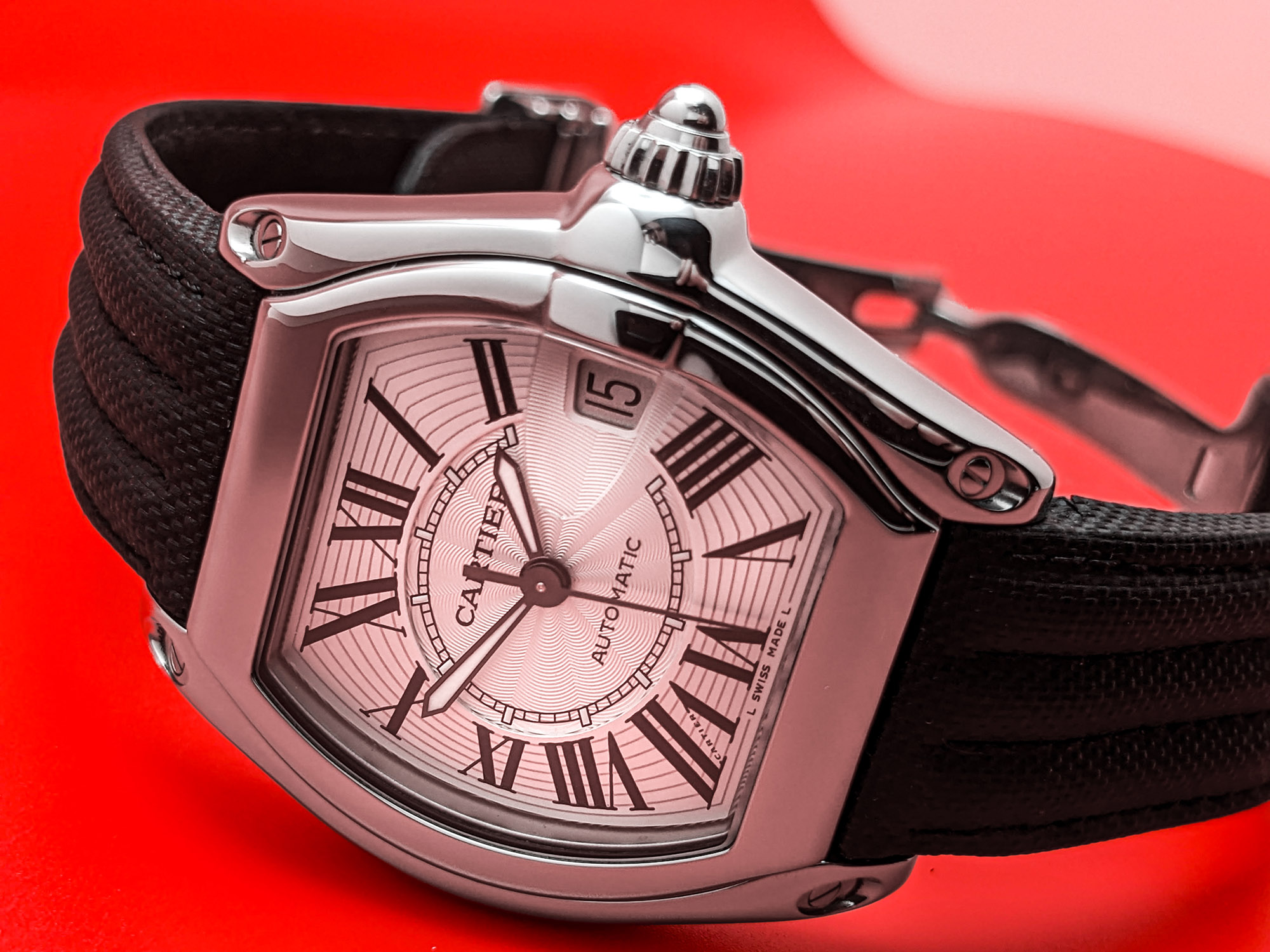 First released in 2001, the Cartier Roadster was not the brand’s first foray into the world of automotive watchmaking (Cartier had previously developed a handful of dedicated driver’s watches to be worn on the side of the wrist in the mid-1930s, and the origins of the iconic Cartier Crash make it debatably an automotive-themed piece, as well), but it did mark a turning point in the brand’s approach to the nebulously defined “car watch.” In many ways, this very well could have been Cartier’s general-purpose sports watch for the new millennium, with a solid 100 meters of water resistance, durable construction, and a variety of bolder sizes that set it apart from the traditionally dressy, diminutive core of the Cartier brand. In practice, despite a dedicated cult following the Roadster lasted barely a decade before being unceremoniously dropped by Cartier in 2012, while the brand turned its automotive-themed efforts towards the far more conservative Drive series. 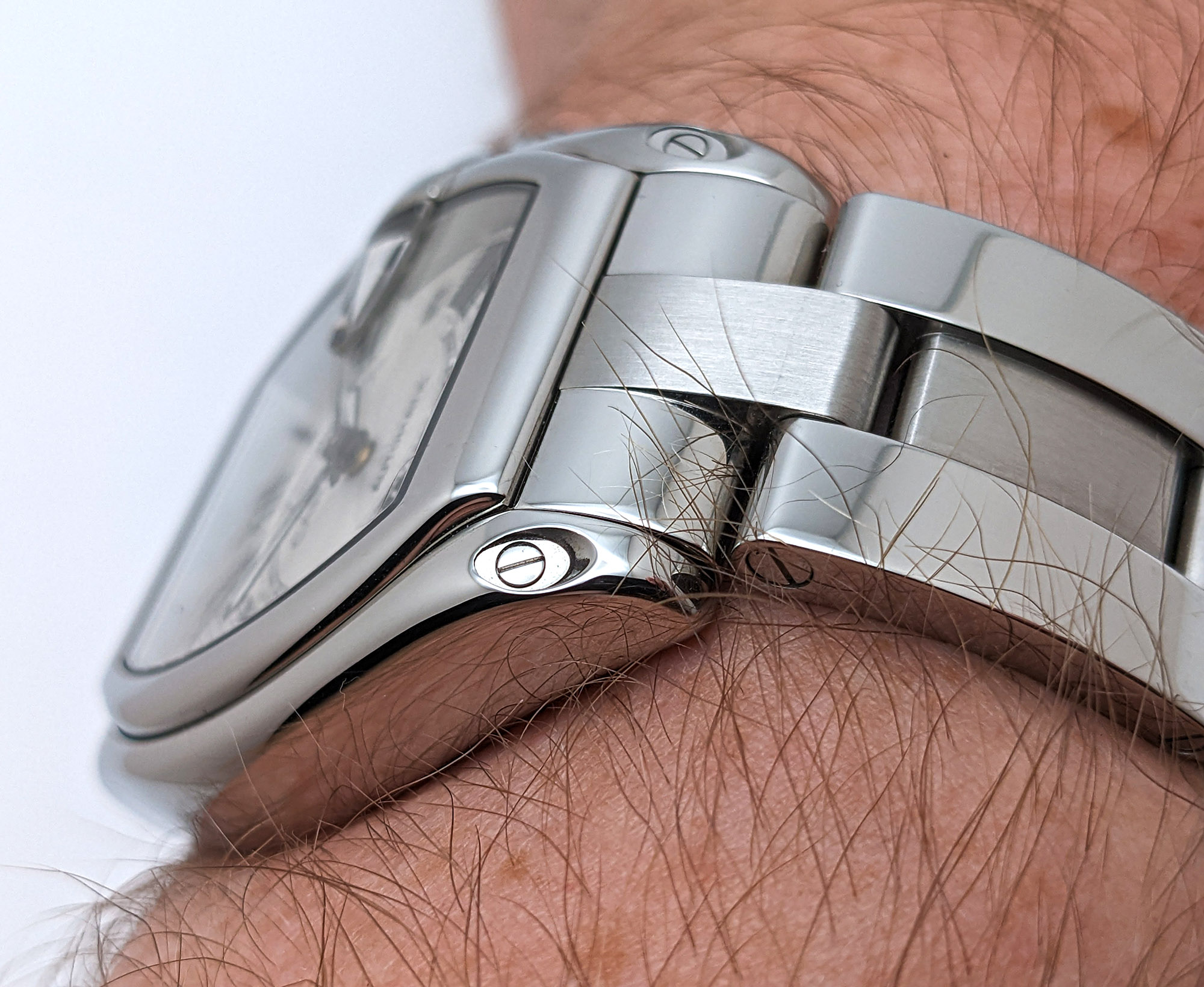 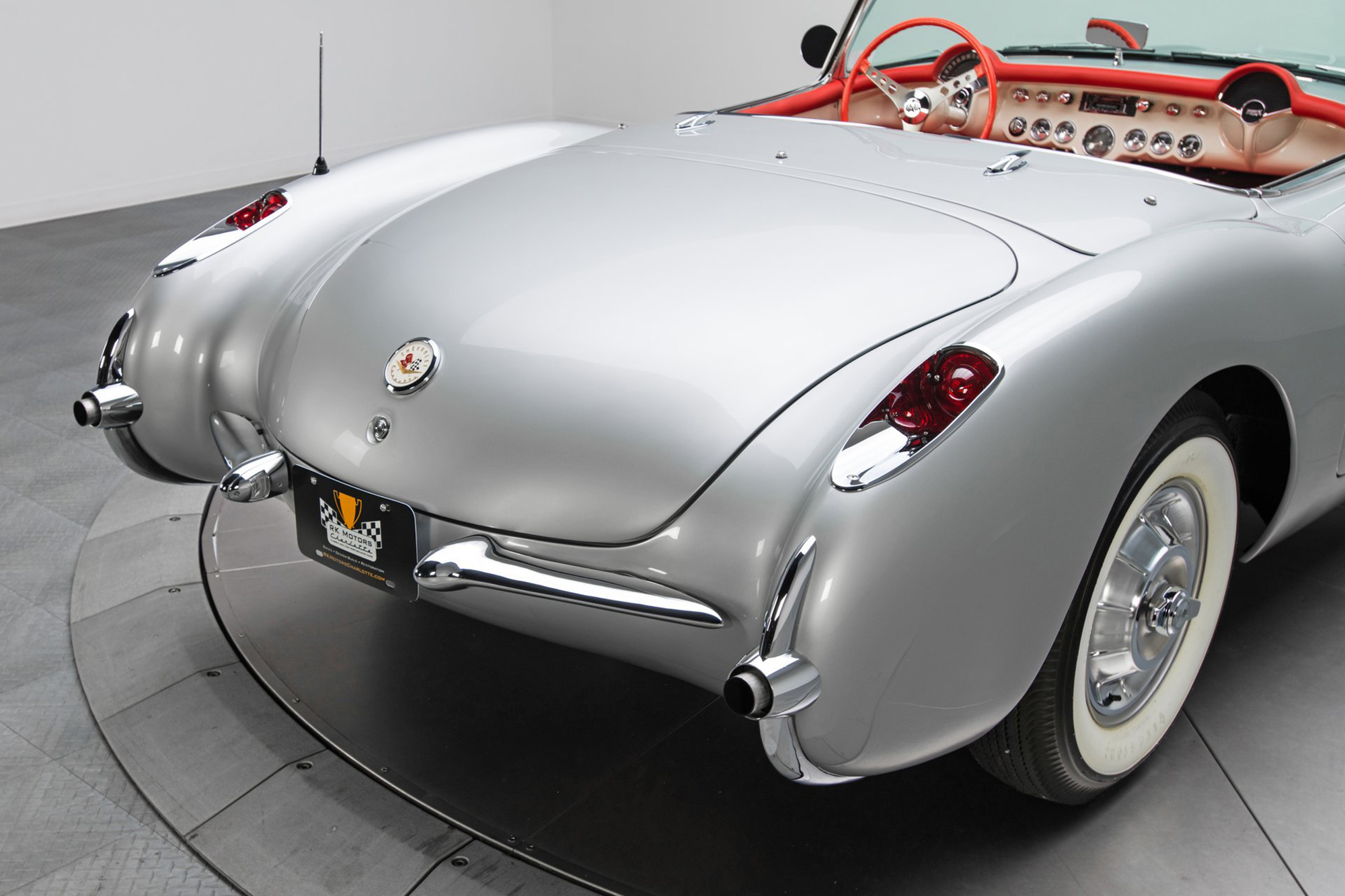 While it may be gone, the Roadster line remains a unique expression of automotive-influenced watchmaking, combining the sumptuous look and feel of Cartier’s design language with a classic American bent. This circa 2008 Cartier Roadster LM offers one of the purest expressions of the design in the broad, diverse collection, which includes everything from diminutive gem-set women’s pieces to massive, oversized two-tone chronograph designs. Sized at 38mm-wide by 44mm lug-to-lug, the Roadster LM’s mirror-polished stainless steel case takes on a softly rounded, Franck Muller-esque semi-tonneau form. Although the tonneau shape wears noticeably larger than an equivalent 38mm round case, the Roadster LM conforms to the curvature of the wrist impressively well, with a gently arched caseback and corresponding case sides that give the design a soft, organic feel when worn. A raised, rounded step bezel helps to give the design a sense of dimension and complexity, but it’s the automotive visual cues that truly bring the Roadster’s design to life. At each of the lug tips sits a decorative recessed faux screw design, which adds a sporting edge to the overall form. The shape and positioning of this screw, coupled with the flowing shape of the lug itself, works to evoke the recessed taillight design of the 1957 Chevrolet Corvette. In a field dominated by Eurocentric design influences, it’s a surprising slice of ‘50s Americana, but it’s only the first of the Roadster LM’s classic American touches. 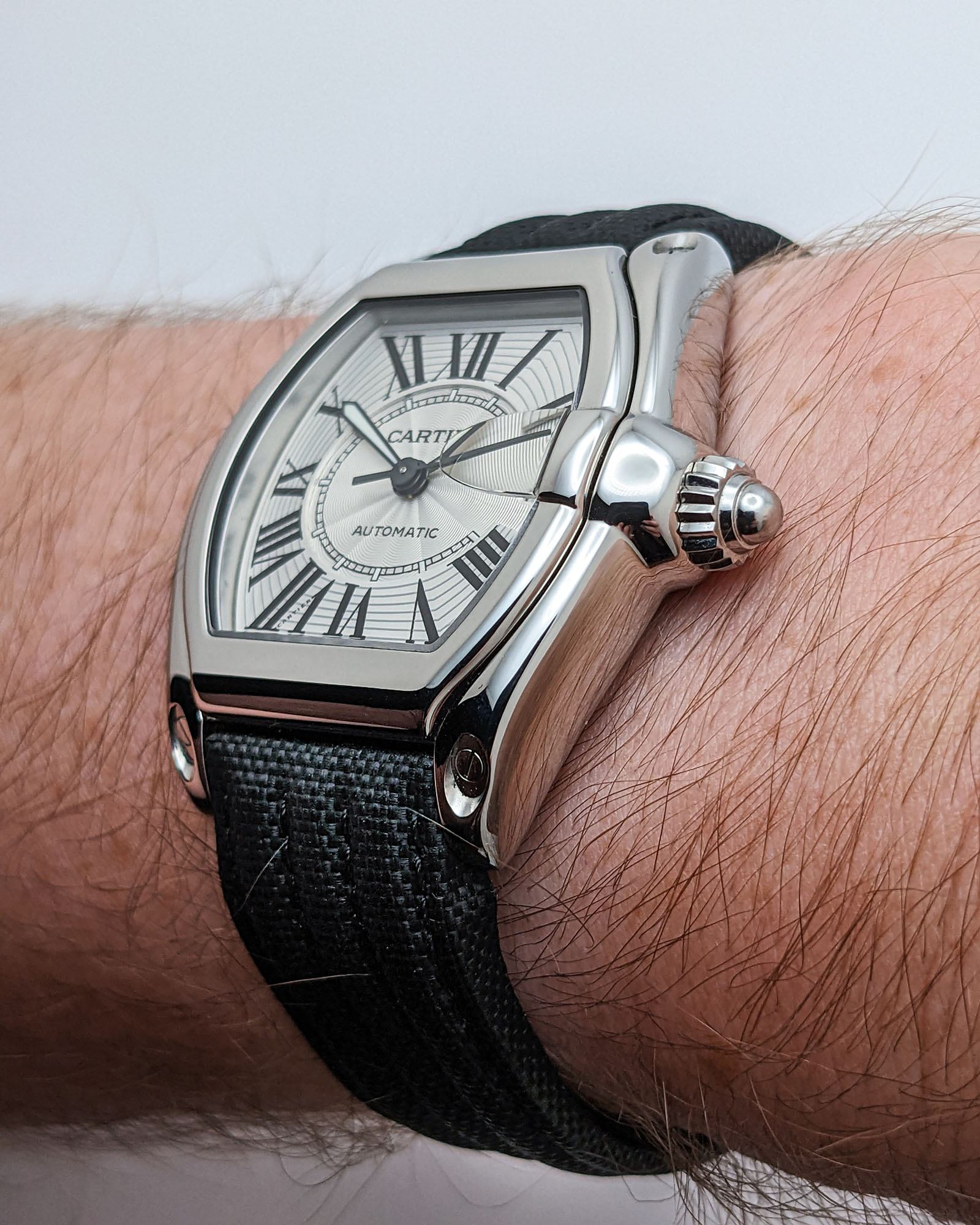 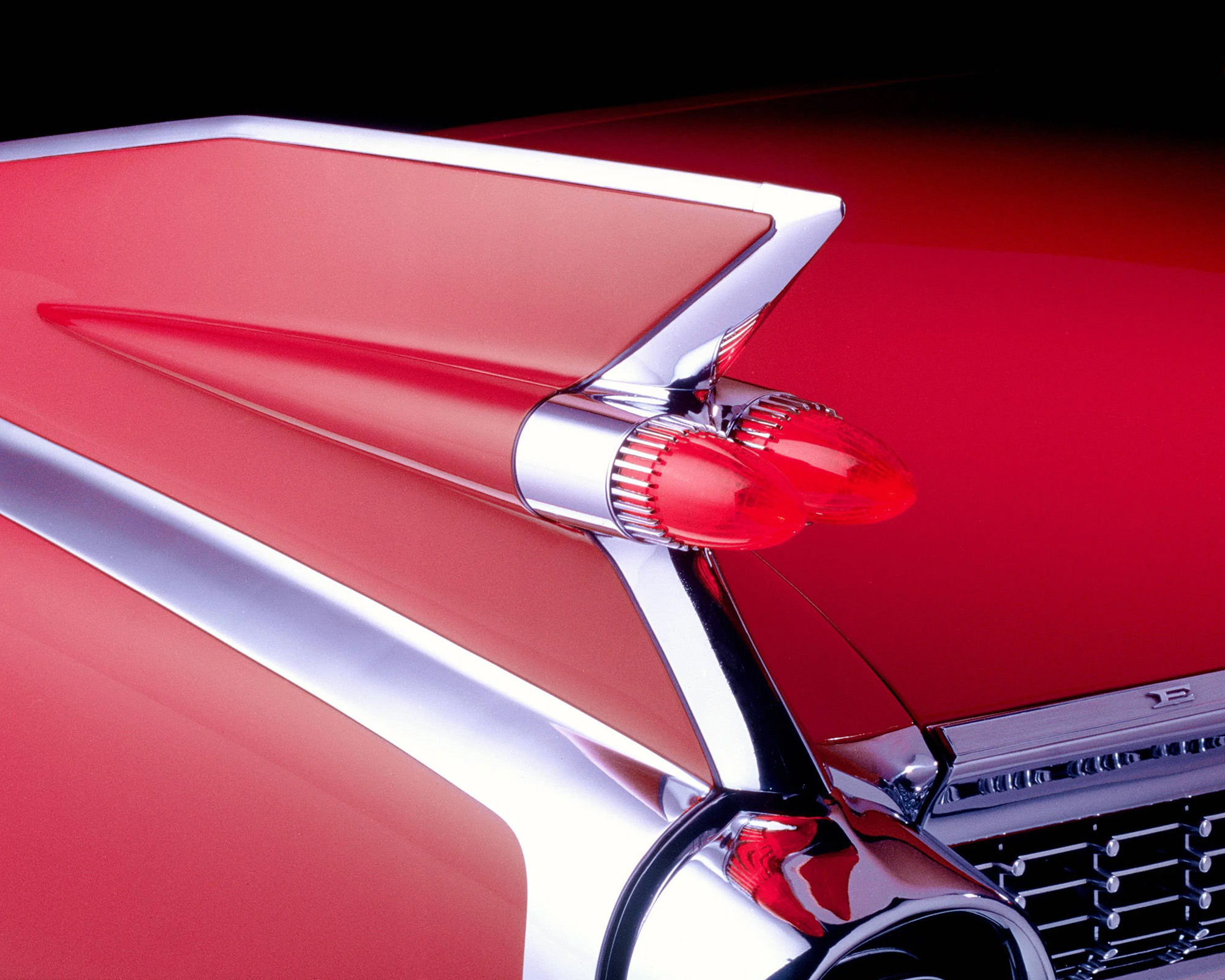 Among enthusiasts, the Roadster’s most enduring feature is its wildly stylized crown design, with an exaggerated tip and a flowing design that extends through the case sides, over the bezel, and into the crystal to create a unique bullet-shaped date magnifier at 3 o’clock. It’s undoubtedly a love-it-or-hate-it design element, but this one-of-a-kind inclusion seamlessly combines Cartier hallmarks like the extended, rounded crown tip with a pair of additional automotive cues. When viewed from the 3 o’clock case side, this extended crown echoes the look of the conical “Dagmar” front bumper guards used by American automakers ranging from Mercury to Cadillac through the ’50s. From the dial side, however, the entire assembly from the date magnifier to the crown tip closely follows the contours of one of the most famous pieces of ‘50s American automotive design — the fin-mounted taillights of the wild 1959 Cadillac Eldorado. Widely considered to be the peak of the maximalist “fins and chrome” design movement that dominated that decade of American car design, even small details of the Eldorado’s fin assembly are translated into the Roadster LM’s design – for example, the fluted ring at the base of the crown closely corresponds to the chrome trim ring at the base of the Eldorado’s elongated, jet flare-shaped taillight lenses. In keeping with the Roadster line’s sporty positioning in Cartier’s catalog, the Roadster LM’s case is finished with a solid caseback and a respectable 100 meters of water resistance. 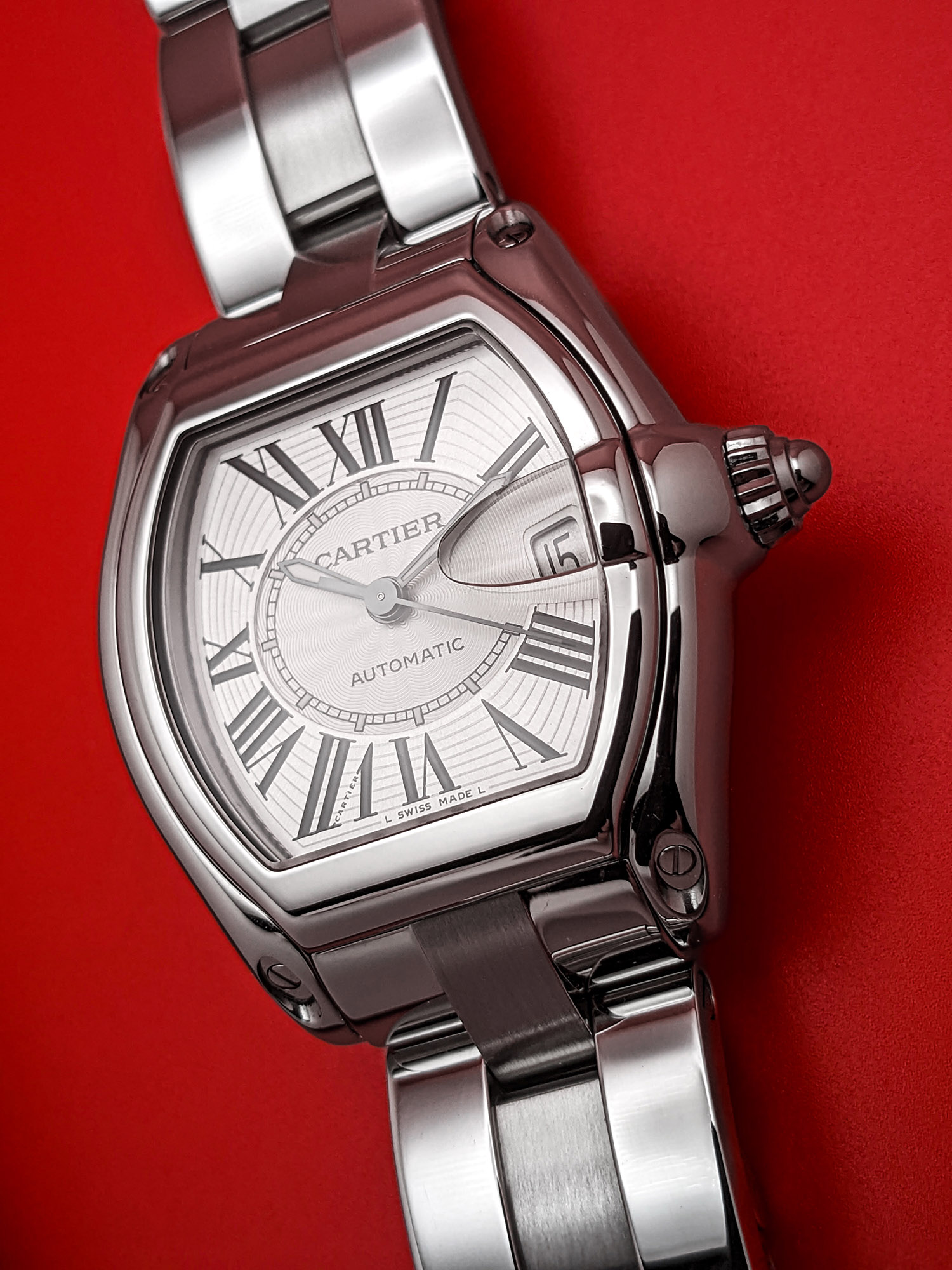 For the Roadster LM’s dial, Cartier takes a slightly more straightforward approach but adds a few more subtle automotive cues to the blend of traditional Cartier hallmarks here. The most obvious of these is the series of concentric rings on the raised outer hours scale, a visual touch lifted from the VDO gauge designs used in the Porsche 356. This is the most overtly European automotive touch here, and while it presents itself more obviously in Arabic dial variants of the Roadster, the Roadster LM still uses these rings to effectively break up the visual real estate of the finely-grained silver sunburst scale here. Rather than printed Arabic numerals, this Roadster LM instead opts for a classic set of oversized printed Roman numerals. These numerals handsomely fill the negative space of the dial while reintroducing some traditional Cartier refinement to the layout, and nuances like the traditional printed Cartier signature inside the 7 o’clock numeral help to tie the Roadster LM in with the larger brand ethos. The recessed center of the dial adds a finely worked guilloché texture to the silver surface, giving the dial a dynamic look in changing light and adding a more luxurious feel to this ostensibly sporting design. The Roman sword handset moves the overall look in a decidedly more sporting direction and provides the dial with a surprising (for Cartier) amount of lume. On the other hand, the partial chemin de fer inner minutes track is more in line with the brand’s traditional aesthetic, and Cartier uses this familiar element to add a unique hidden signature. Thanks to the cutout in both the hours and minutes scale formed by the 3 o’clock date window, the minutes scale forms a giant, stylized Cartier “C” emblem. In addition, the extended date magnifier also allows wearers to use it as an impromptu loupe to more closely inspect the guilloché dial texture. It’s a thoughtful, considered touch that rewards close inspection while ensuring the overall design remains recognizable as a Cartier. 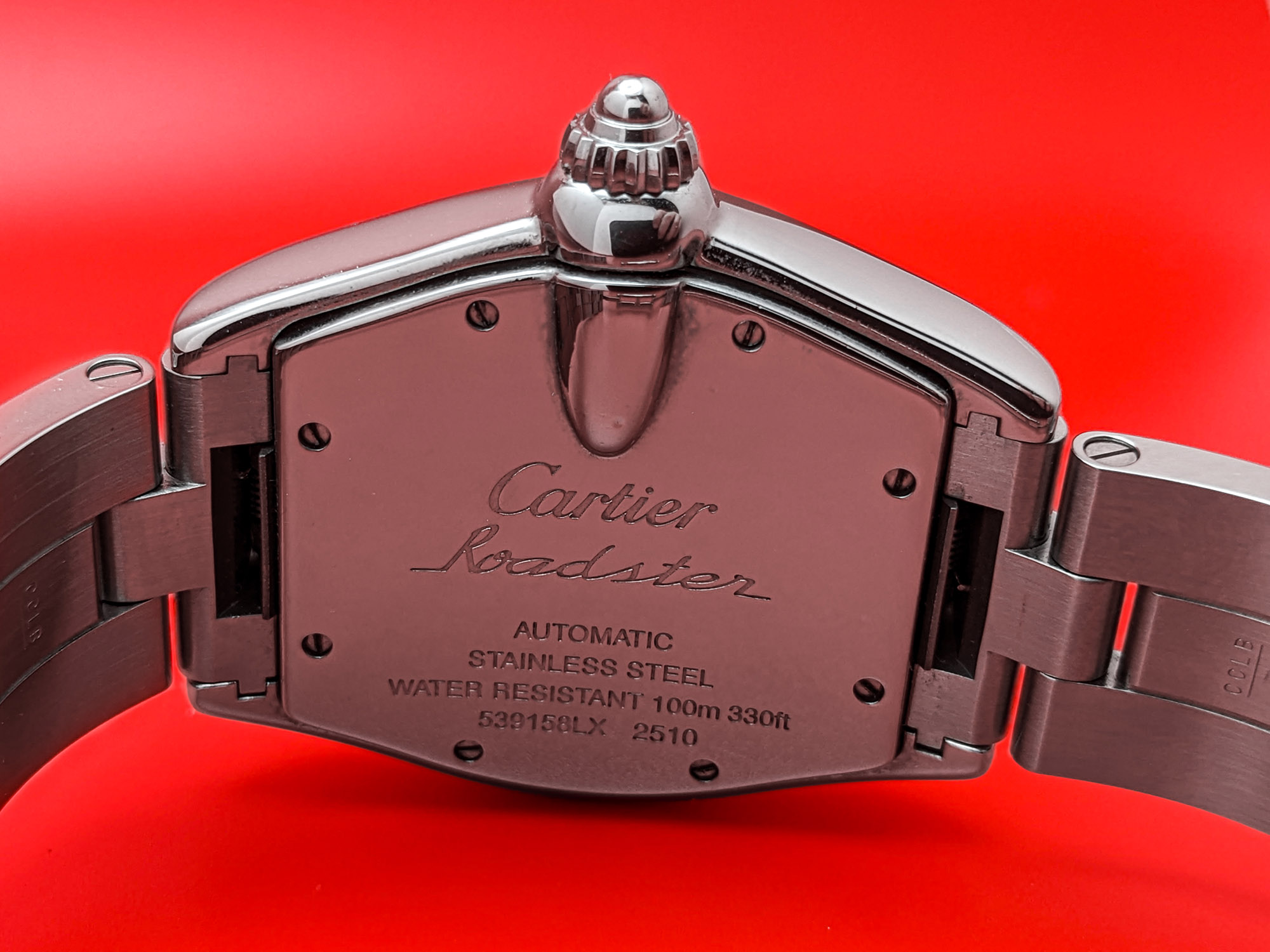 The Cartier Roadster LM is powered by the ETA 2892-A2-based Caliber 3110 automatic movement. While it may not carry the romance or prestige of the brand’s in-house powerplants, the Caliber 3110 offers reliable performance and easy servicing, with a 42-hour power reserve at a 28,800 bph beat rate. Although hidden by the solid caseback, the Caliber 3110 also offers unique finishing, including perlage across the bridges and a custom-signed rotor. 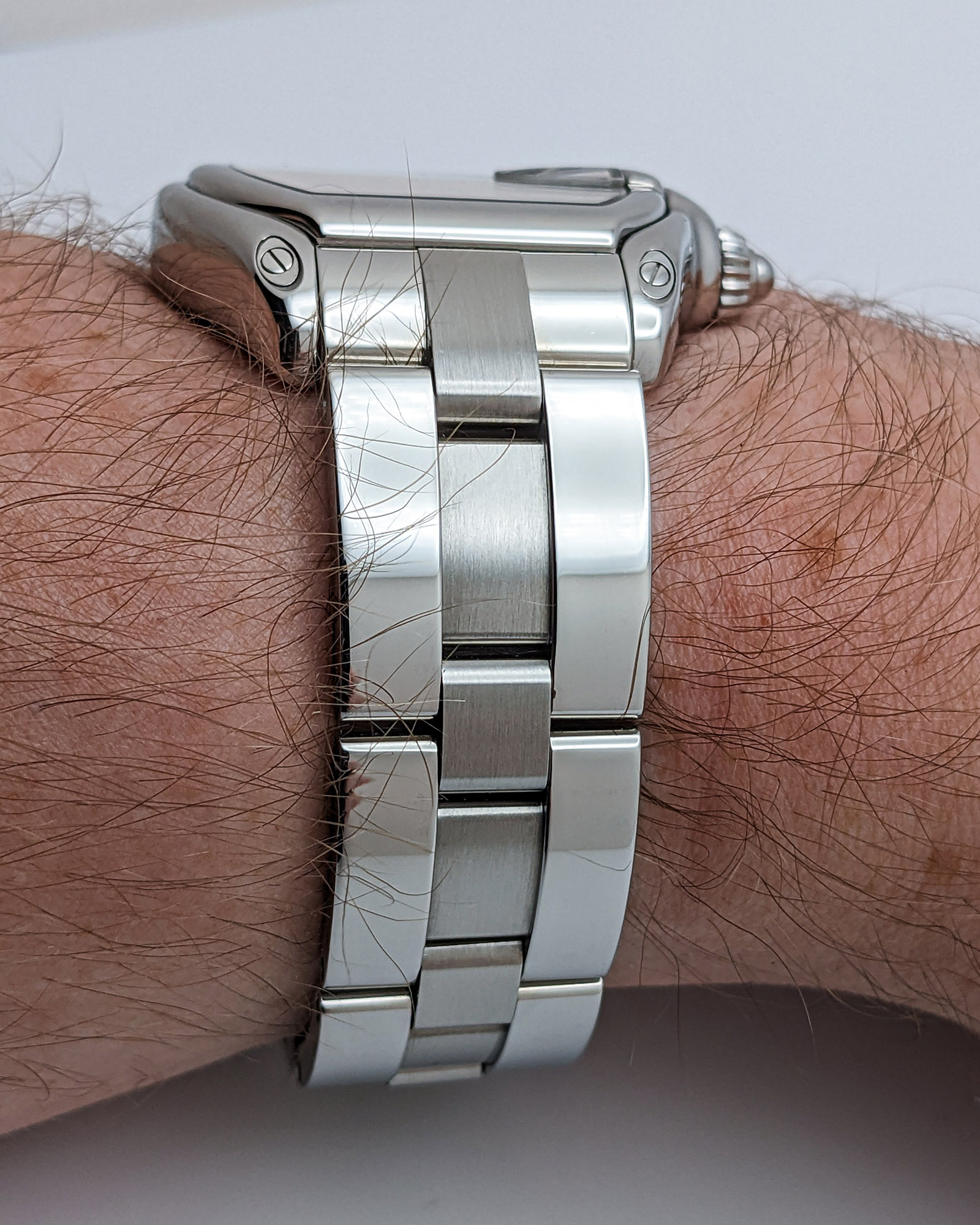 One of the Cartier Roadster series’ most innovative features was the inclusion of what may very well be the first factory quick-release strap system. Over the course of its production run, Cartier produced a spectrum of strap designs for the Roadster line in a broad range of colors, styles, and materials, all of which can easily be swapped at the press of a button. The centerpiece of the Roadster’s strap collection is a stainless steel H-link bracelet, which uses elongated, curved links to continue the case’s comfortably ergonomic wraparound effect. Cartier also uses this bracelet as a venue to introduce contrasting finishes to the Roadster design, with recessed central link segments in smooth, even brushing. Taken as a whole, this bracelet is a charming, idiosyncratic mix of sporty and ornamental cues, but it does markedly increase the overall wrist presence of the watch thanks to a set of extended male endlinks. This particular Roadster LM is also equipped with a ridged black textile strap for a sportier feel, along with an alligator leather strap for a more classically upscale look. 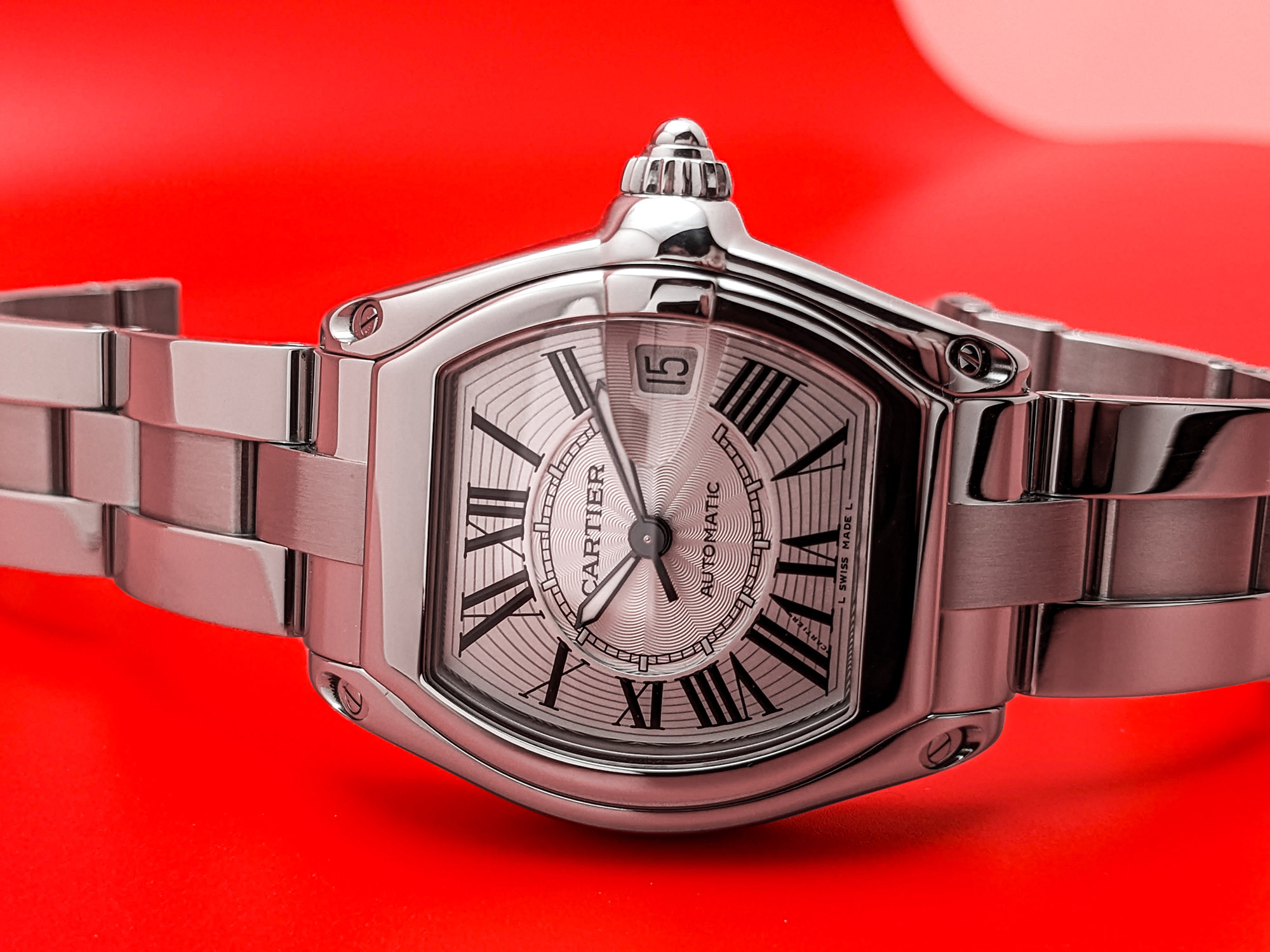 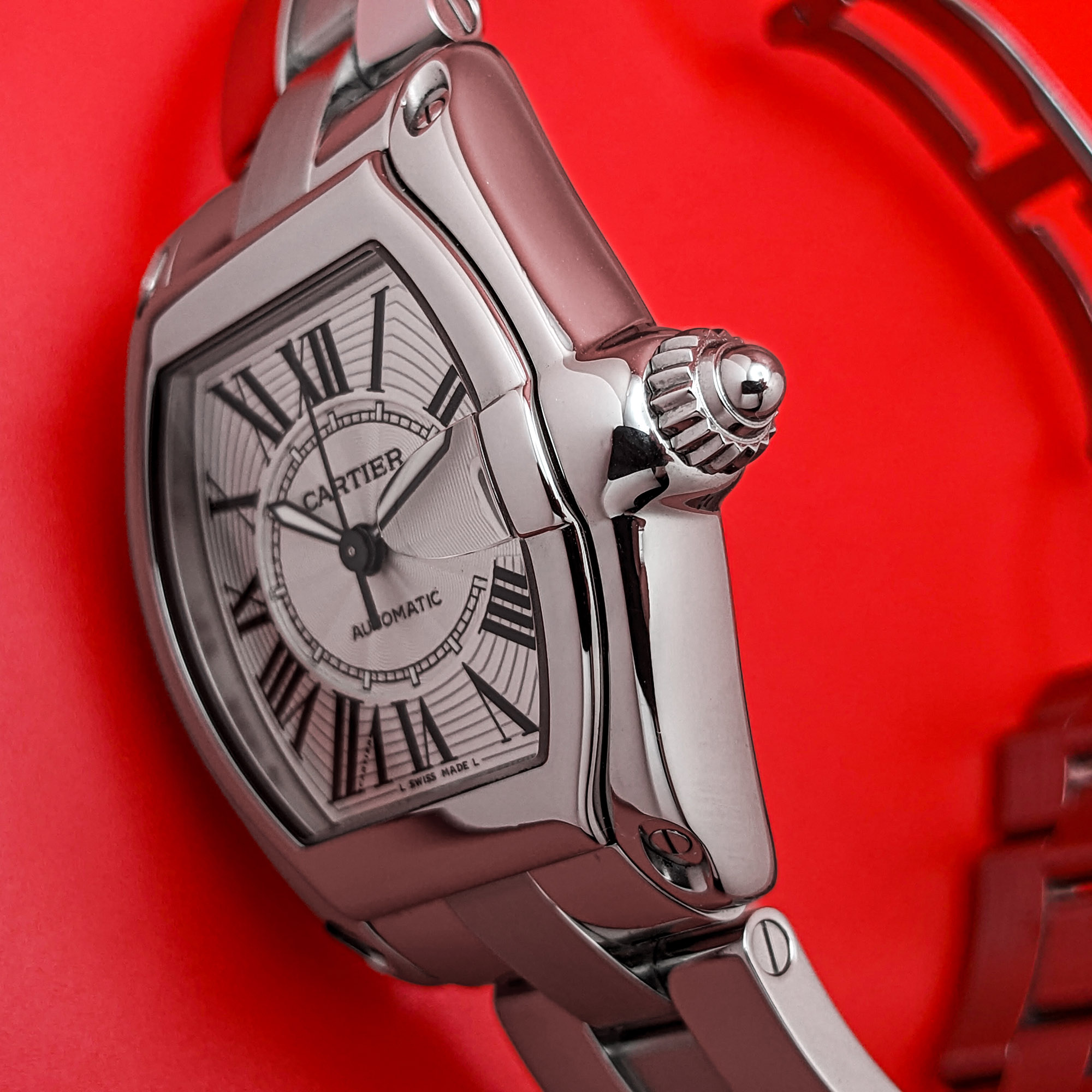 Although it currently stands as a dark horse among Cartier collectors and enthusiasts, the Cartier Roadster line is a prime example of the joys of taking the less obvious path to automotive-inspired design, as well as one of its most versatile and distinctive modern sports watches. Its blend of traditional Cartier stylistic codes with flashes of ‘50s automotive Americana is truly one of a kind, and may well become a future classic among collectors aiming to find a modern Cartier reference outside of the usual suspects. It’s also one that speaks to me personally, both as a car enthusiast and a watch fan, and one that serves as an inspiration to look beyond the obvious sources in watch design.