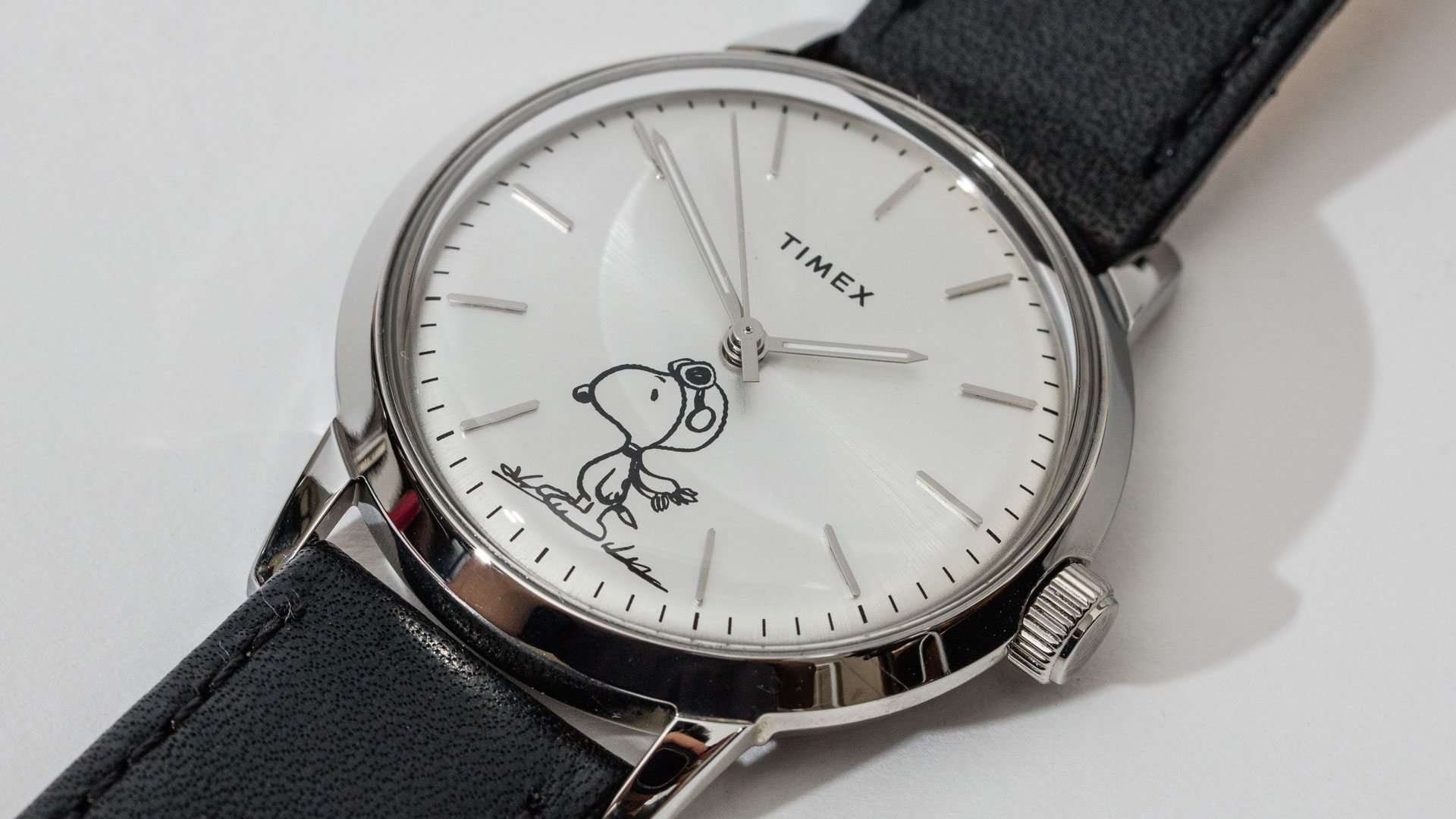 The Snoopy Edition of the Marlin Automatic is a limited production version of the new 40mm wide Timex Marlin Automatic timepiece collection as the reference TW2R94800. As its name implies, the Snoopy Edition has an aviator-dressed version of Snoopy from the Peanuts comic universe on the dial. This is known as the “Flying Ace Snoopy” and according to Timex, the brand first produced a watch with the character on the dial back in 1965.

Snoopy watches have been surprisingly popular over the last few years (even though Peanuts watches aren’t anything new). Swiss Omega’s Speedmaster Silver Snoopy watch remains so popular that it frequently goes for more than retail on the used market. Timex’s “Snoopy watch” offering is much more democratically priced (and should ideally be easier to acquire) and I think it should make a lot of watch lovers pretty happy. 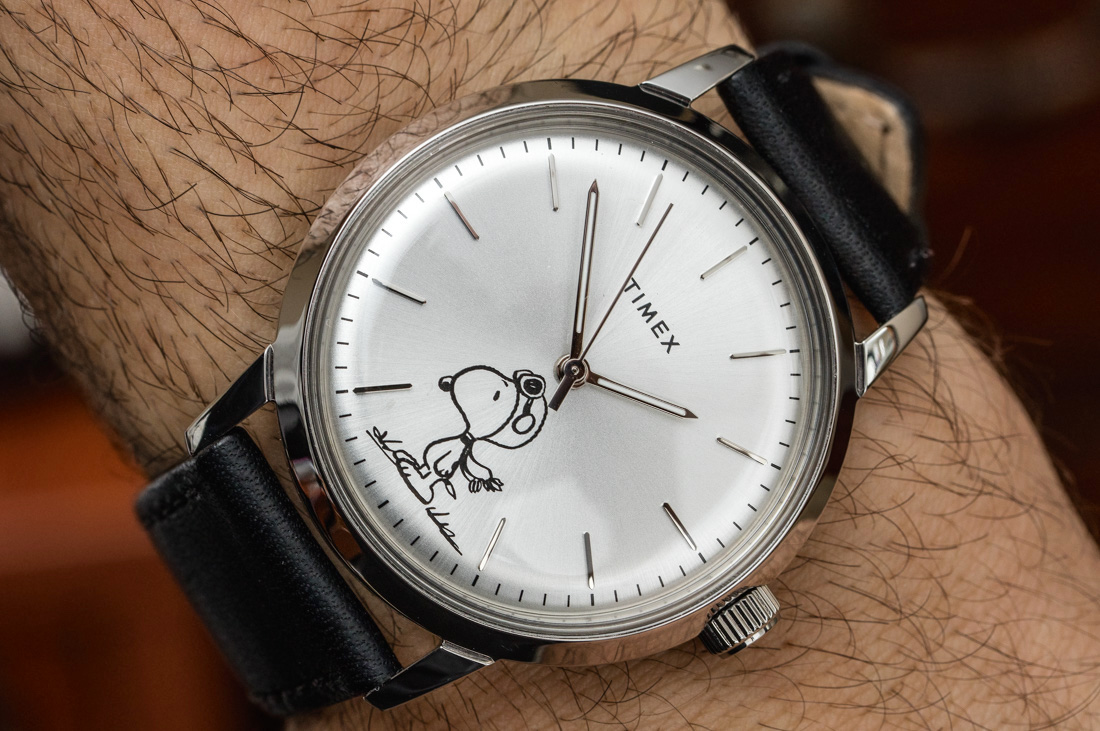 When Timex originally re-released the Marlin collection it was “original sized” at 34mm wide. Fans loved the affordable price, mechanical movement, and vintage theme. The Marlin was (is) a great product but Timex knew it wasn’t ideal for a lot of modern timepiece wearers. The Marlin Automatic retains a lot of what made the original Marlin great but offers some upgrades at a pretty reasonable price that is only 25% more expensive than the smaller Marlin. 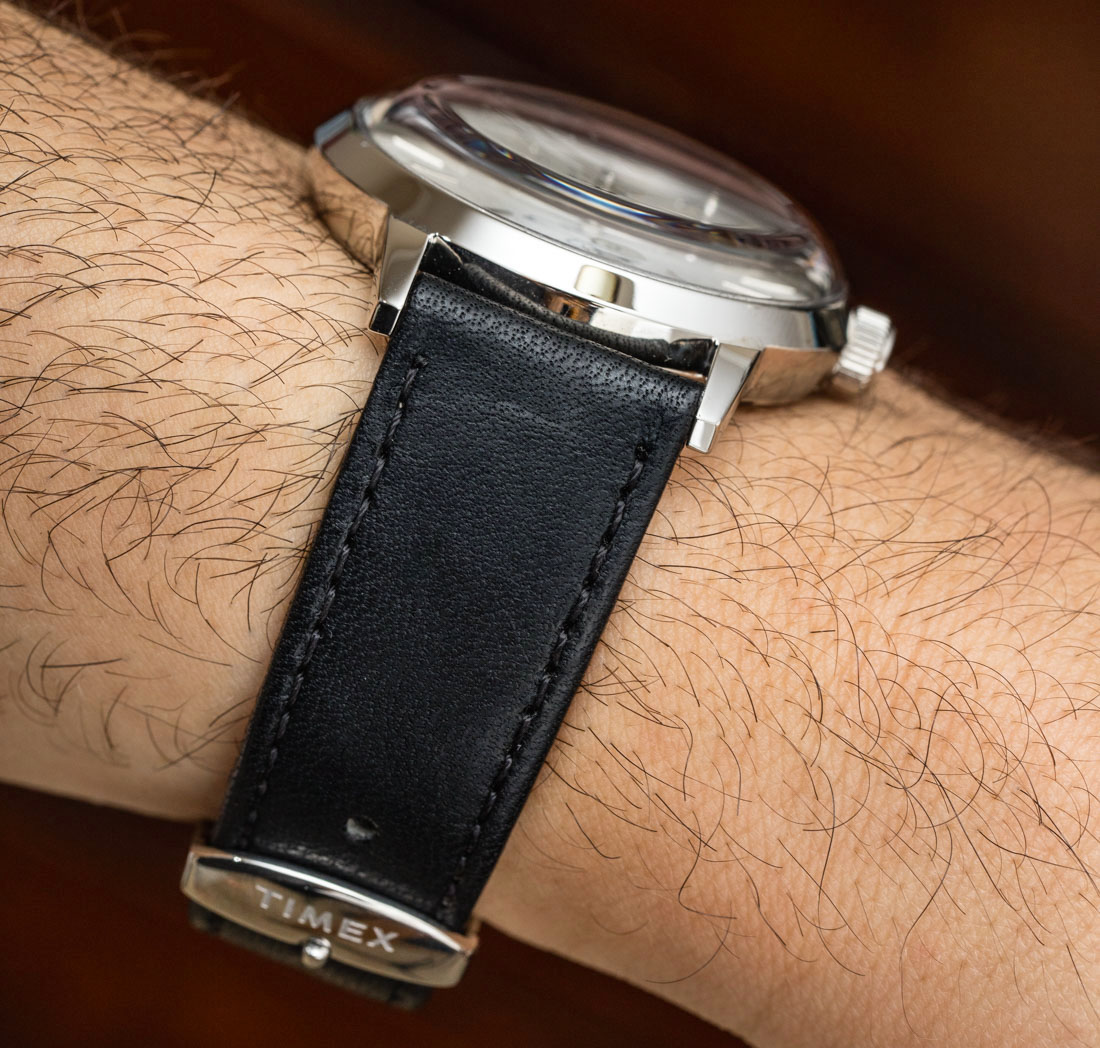 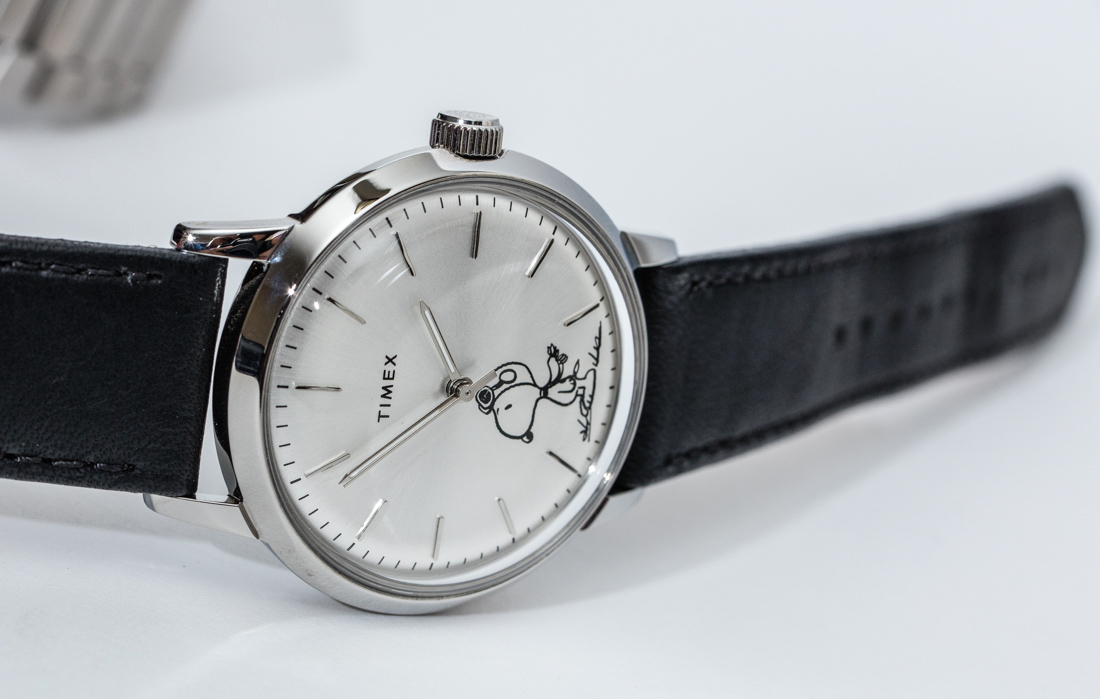 To begin, the Marlin Automatic comes in a much more contemporary taste-appropriate case size of 40mm wide. Nothing is actually shared with the 34mm Marlin, as the Marlin Automatic uses the same model name but takes the collection in a more modern direction. The steel case is clearly vintage-inspired but is new and I think it looks really nice given the price. I like the case’s elegant polishing as well as how the top crystal, case, and lugs flow together to make for a very wearable, soft look and feel. The dial of the Timex Marlin Automatic watches is similarly simple, with baton-style hour markers and needle-style hands with a thin strip of painted luminant in their center. 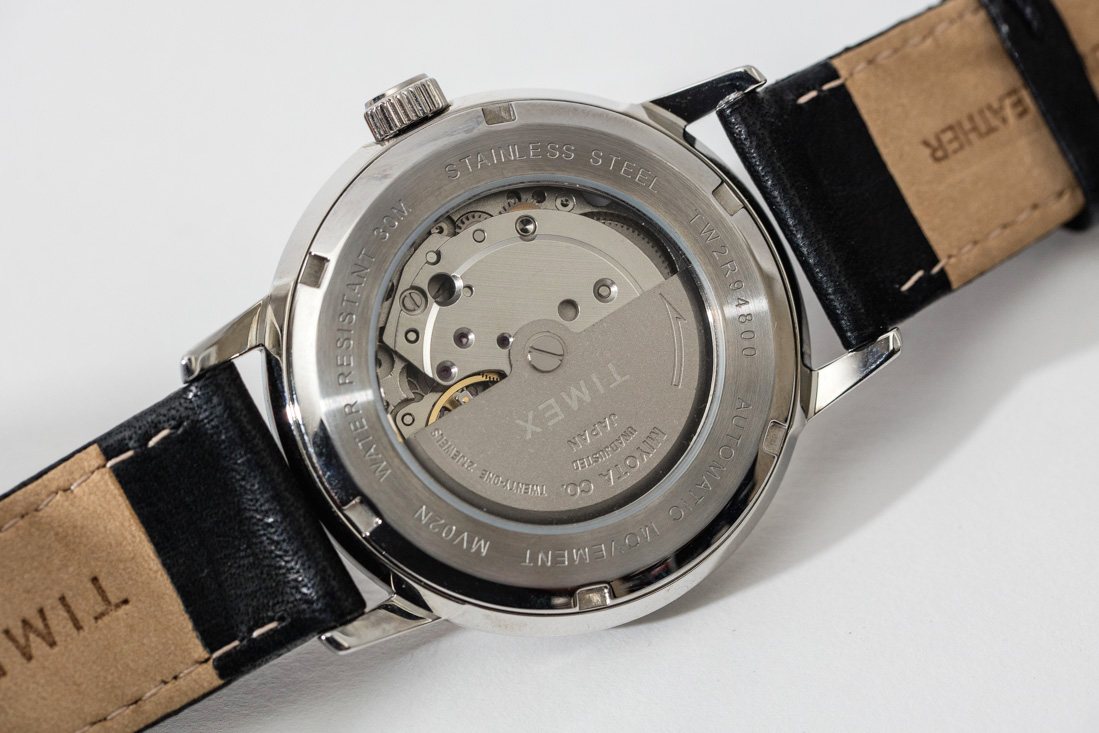 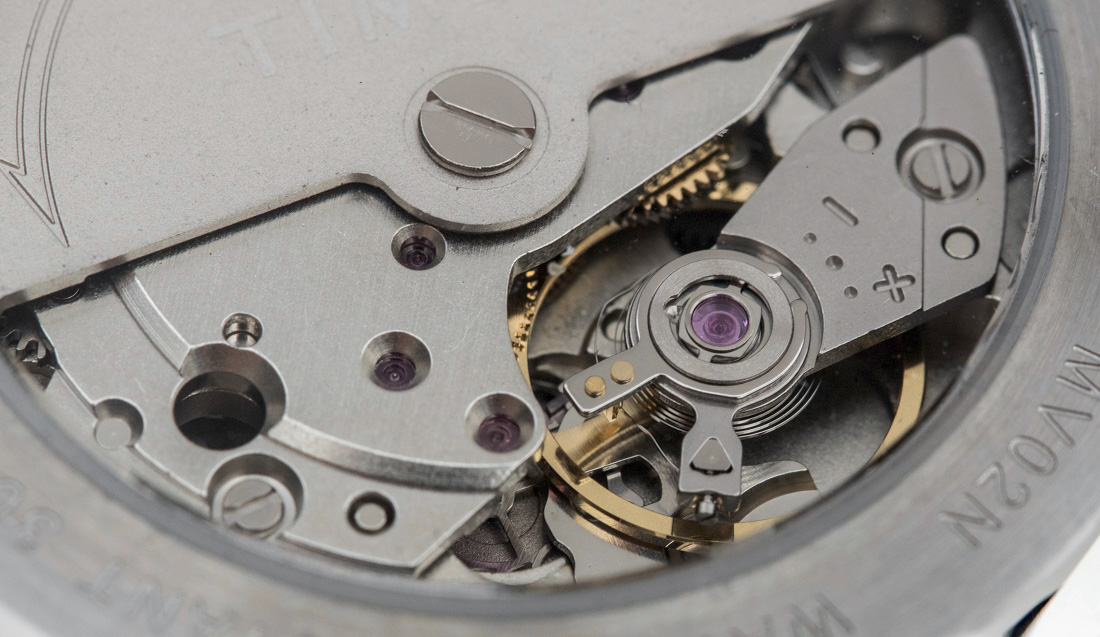 For watch collectors, the most important change to the Marlin is likely the movement, which goes from a Chinese manually wound mechanical movement to a Japanese Miyota automatic mechanical movement that operates at 3Hz with about two days of power reserve. The rear of the watch has a display caseback which offers a view of the movement – likely compelling to buyers who at this price point are likely just getting into mechanical watches. 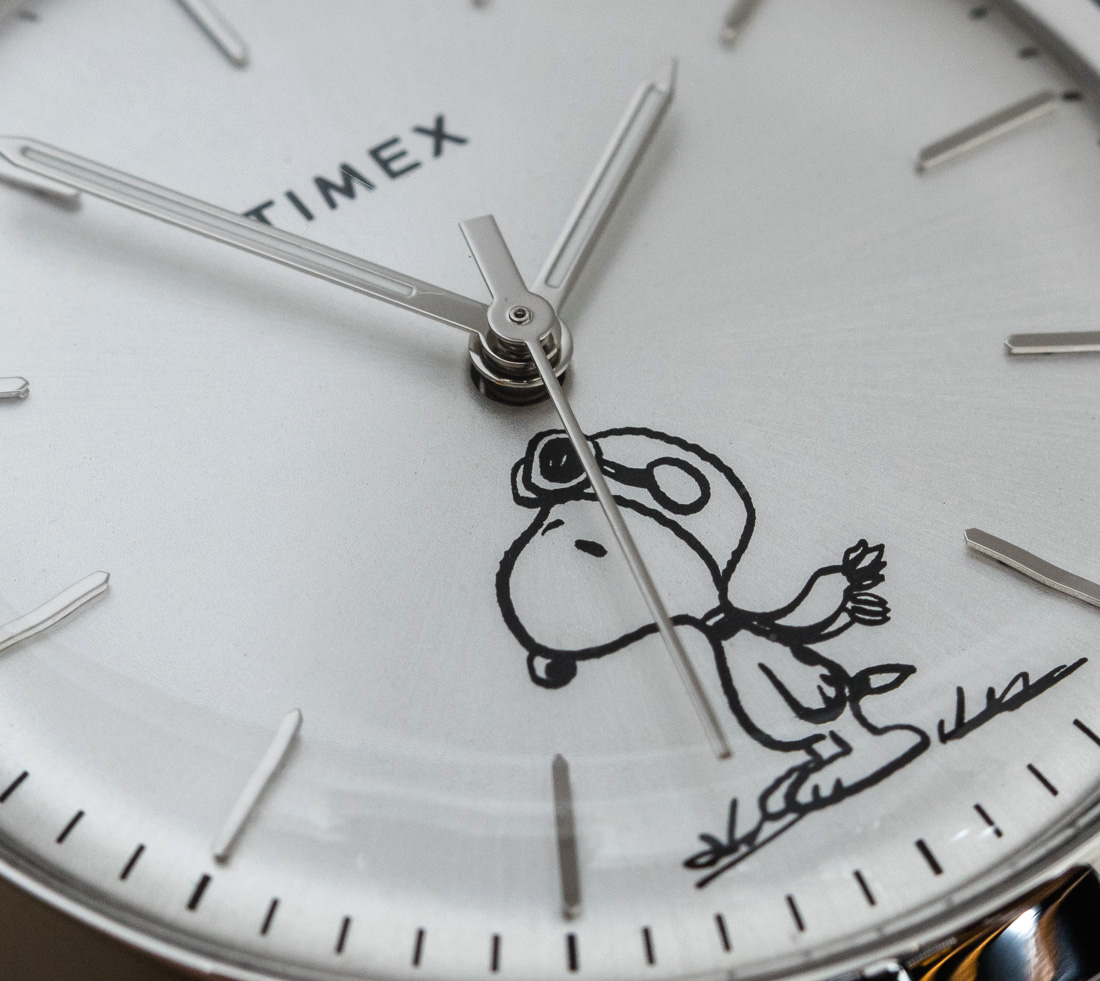 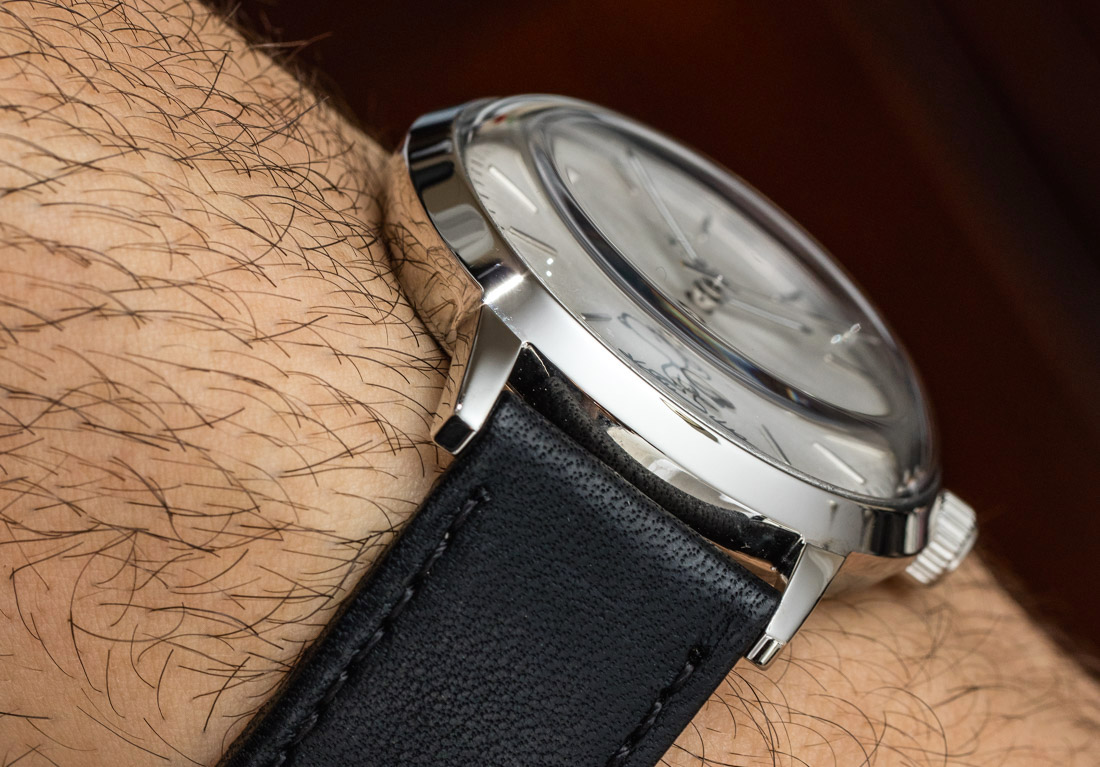 Seasoned collectors with a soft spot for Flying Ace Snoopy should also feel comfortable about wearing such a “pedestrian timepiece” because of the Marlin Automatic’s mechanical nature and the overall respect for those qualities which make a good watch. My only complaint would be the length of the hands, which could be extended a bit in order to reach proper dial proportions. The case is water-resistant to 30m and attached to the case is a black leather strap. 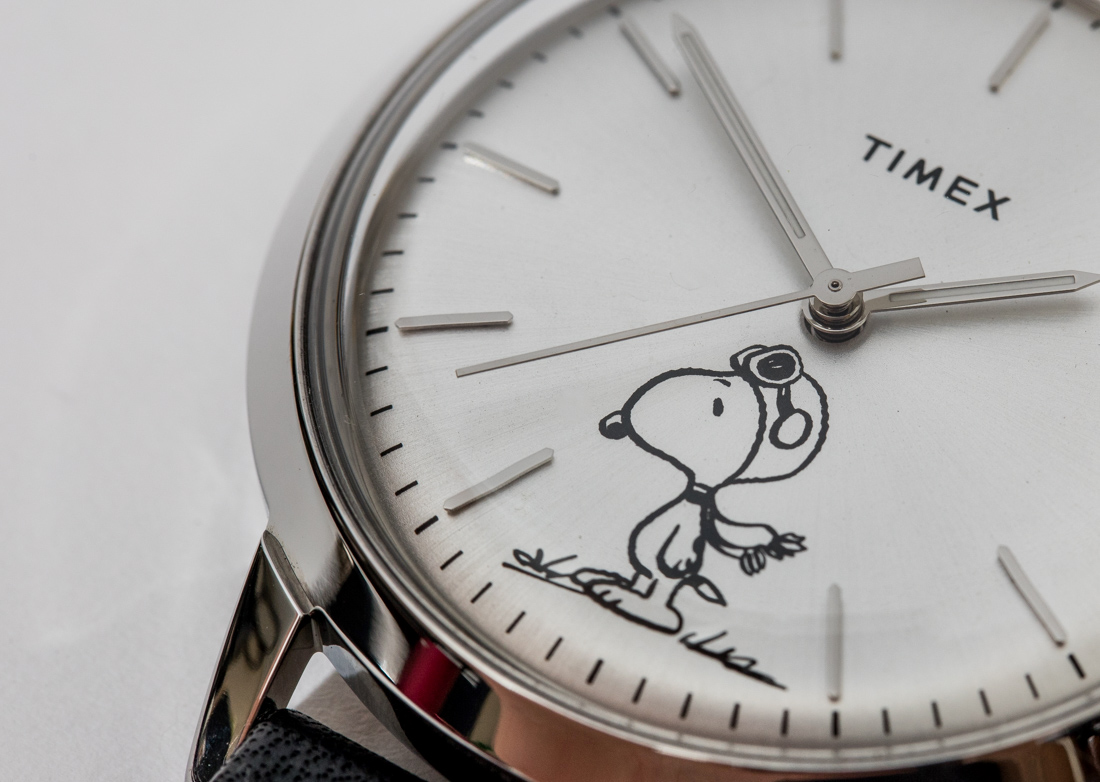 What makes the Snoopy Edition distinct from the rest of the Marlin Automatic watches is, of course, the Snoopy character on the silver-toned dial at the 6 o’clock position. Even if you don’t have familiarity with the personalities of the Peanuts universe characters, the friendly image of Snoopy is almost universally pleasing. The image suggests adventure with overtones of childhood exploration and play. These are all themes which go well with timepieces and for that reason, I think just the simple addition of a graphic on the dial of a watch can be so impactful and create demand. 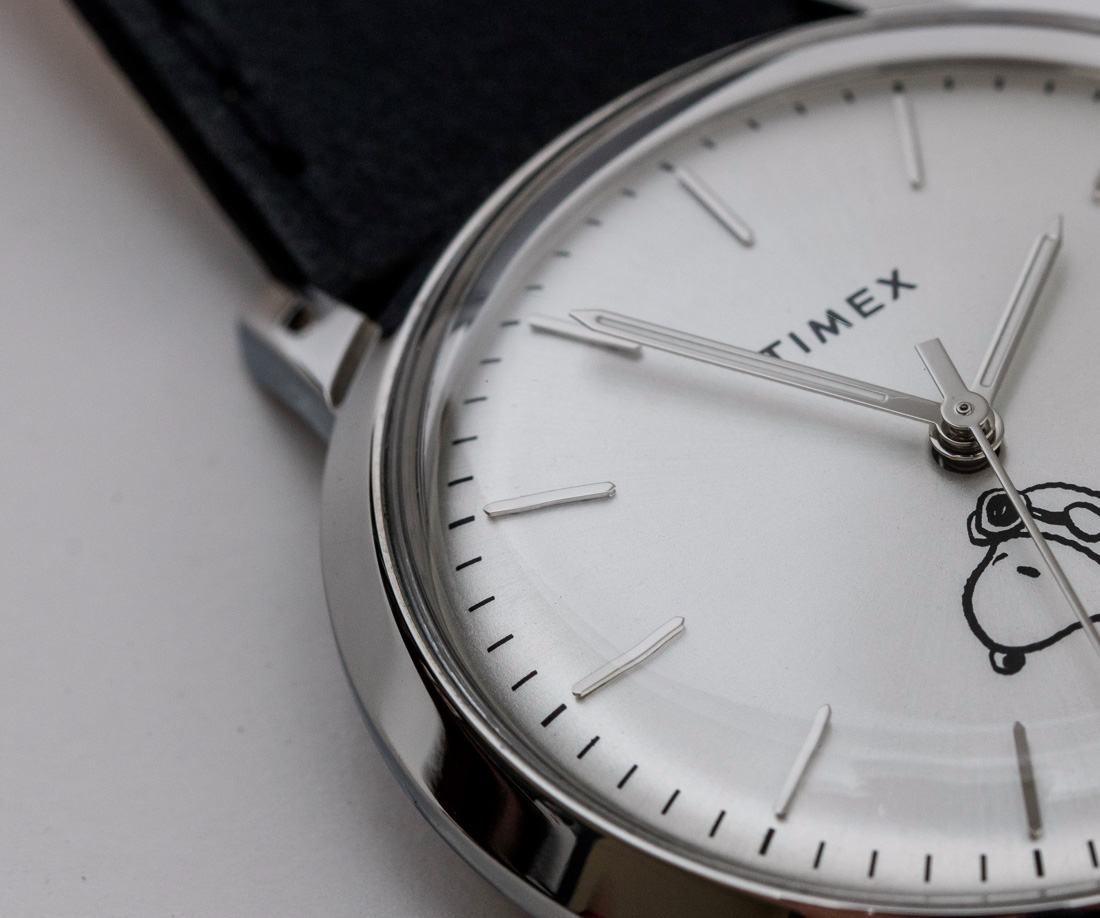 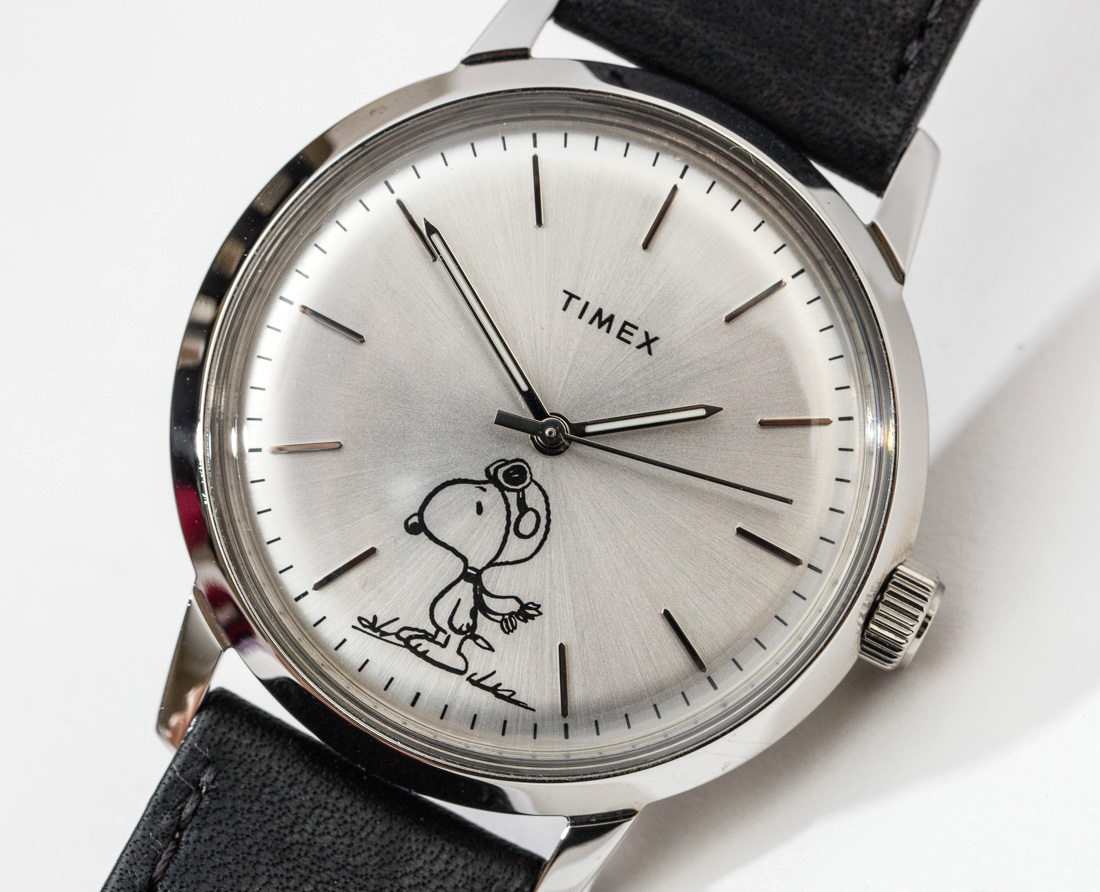 I for one love to celebrate those characters and entertainment properties which currently have an effect on me or that had an effect on me during my more formative years. For this reason, I love watches with characters on the dial – when they are done well. Here I think Timex was appropriately restrained with their design to offer both an elegant vintage-style dress watch, with the added “character” of something fun and animated from our pop culture universe. 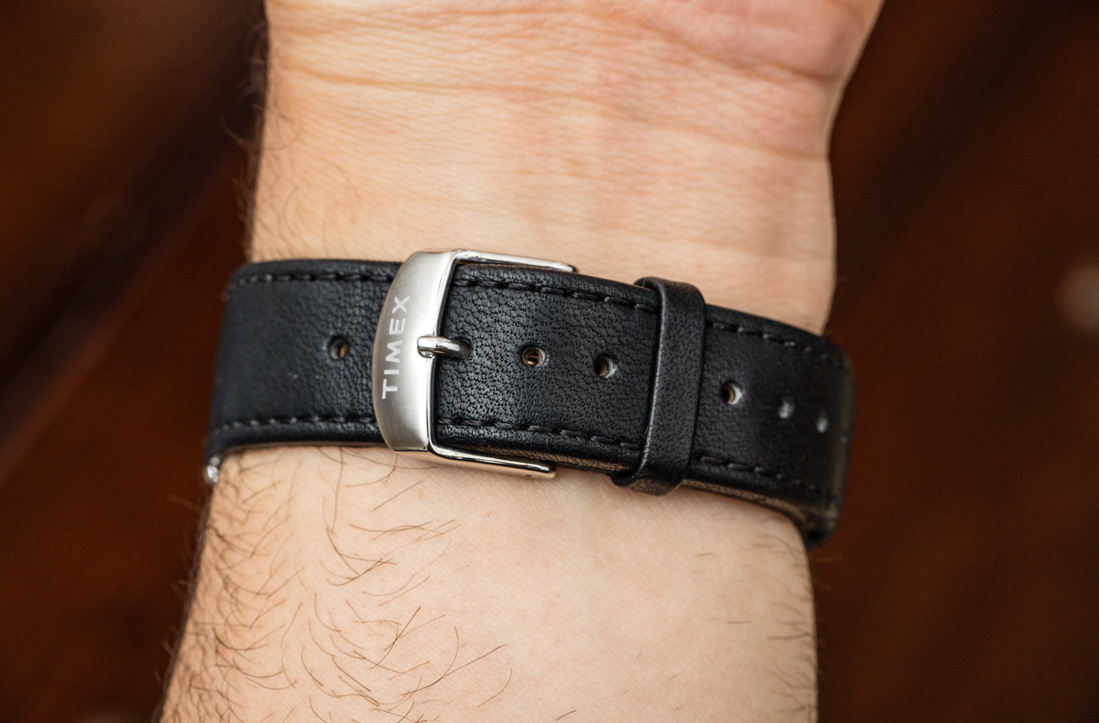 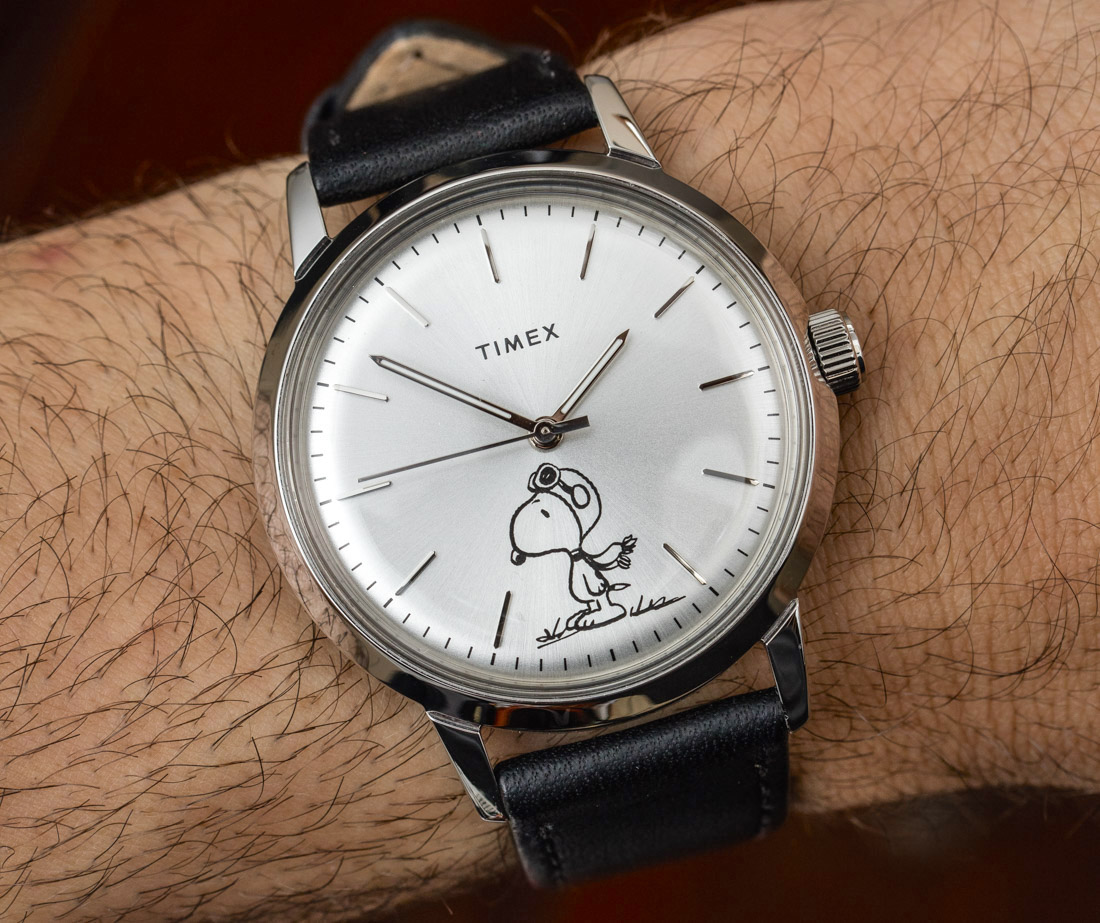