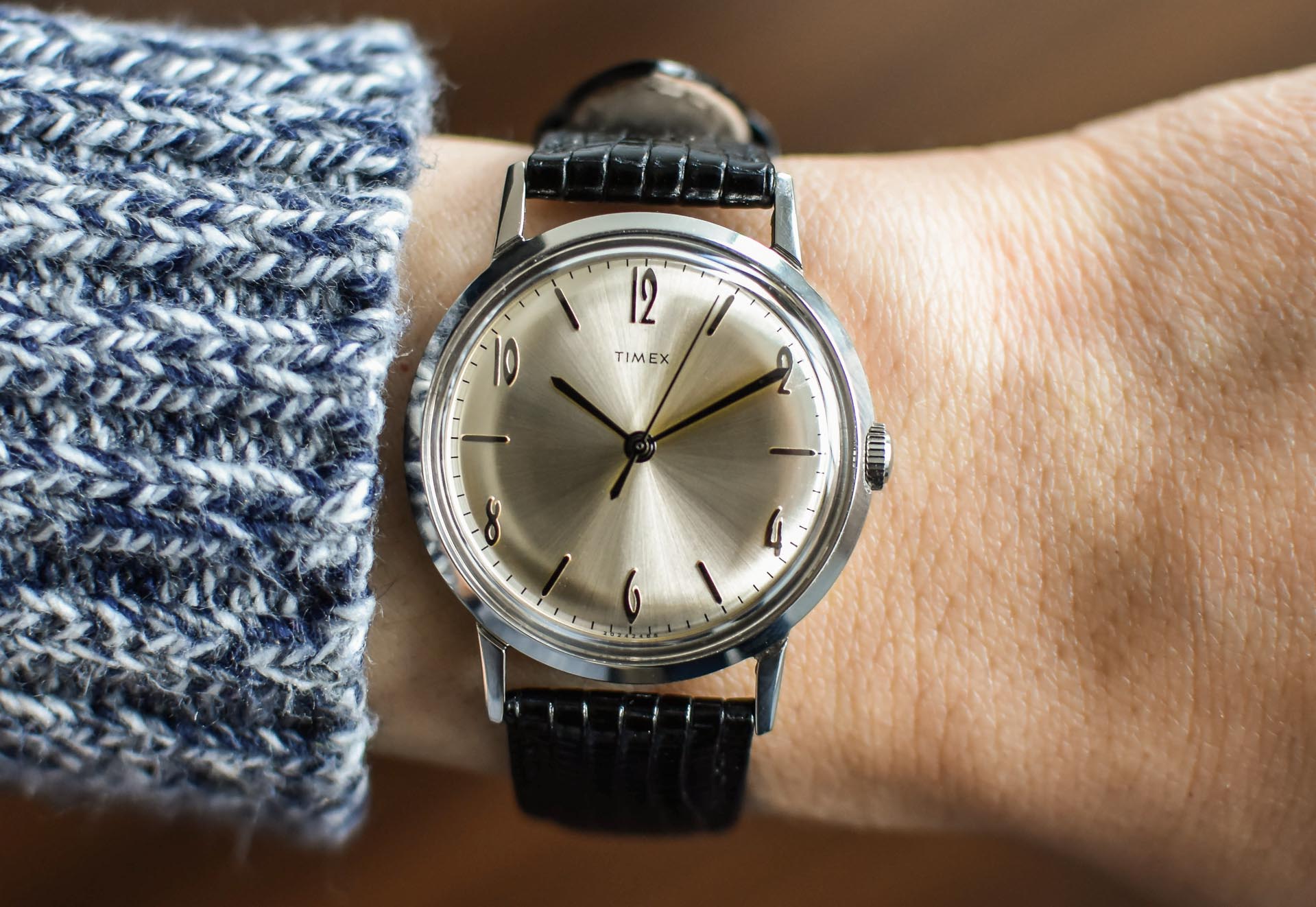 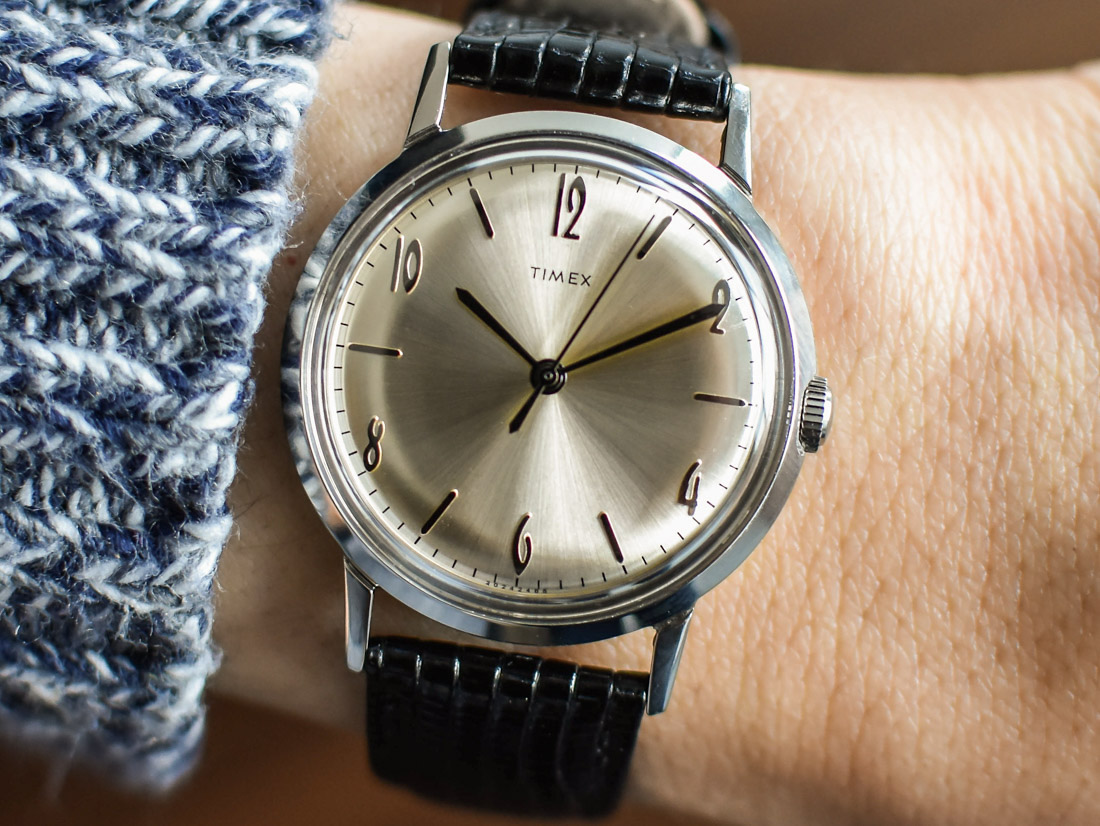 I’ll be the first to admit that the idea of a dedicated “dress watch” isn’t exactly something that appeals to me. In fact, there are plenty of options out there today that can serve a watch enthusiast in multiple ways. Your average Omega Speedmaster, for example, can take on dress watch duties while also serving as a very capable everyday wear option. However, last year I noticed a bit of a shift in the way one particular brand started positioning their releases and Timex – the American brand that stole our hearts during childhood – started enticing us with hot vintage re-releases as well as modern takes on some of their more popular designs. The most impressive model is the brand’s first fully mechanical release since 1982, and it’s known simply as the Timex Marlin. Part of the brand’s new Archive series, the Timex Marlin reissue not only proved itself as a capable dress watch, but as a cheap, accessible timepiece with the ability to attract new and eager watch enthusiasts. In other words, I had to pry it from my wife’s ninja-grip every morning as the watch competed for equally shared wrist time. 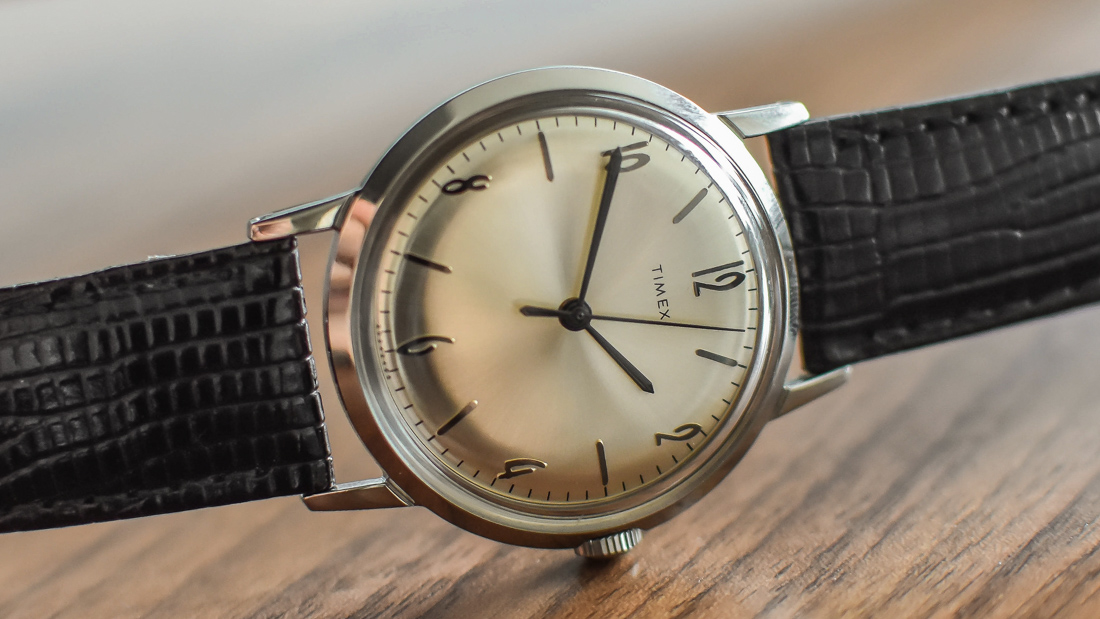 This might be a bit of a stretch for some, but I’m confident in assuming that 2018 is going to be a pretty significant year for Timex. Maybe it’s just me, but I find their recent releases like this Marlin reissue and the Todd Snyder Ms1 Maritime Sport models to be indicative of a brand that’s fully aware of what budget-conscious watch buyers are interested in these days. They aren’t hashing out ’60s models at insane prices but instead, tapping into their heritage in a way that’s inclusive and accessible for watch fans that are into a vintage look and modern construction. As a result, I was happy to incorporate this watch into my rotation as someone that doesn’t necessarily want to spend much on a dainty, conservative dress watch. Plus, if all you’re doing is jumping into a suit and crashing a wedding once every two years or so, you probably don’t care about spending more than $200 on a simple dress watch like this Timex. 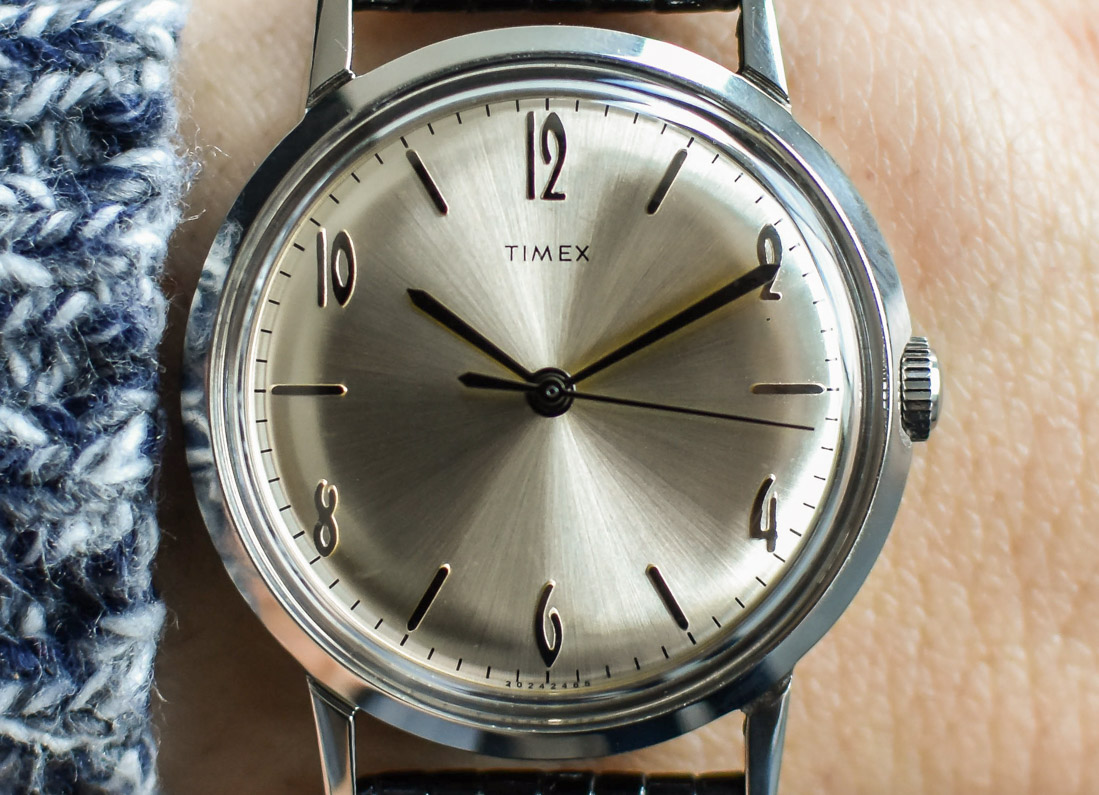 The case of the Timex Marlin comes in at 34mm wide and about 10mm thick. Sure, 34mm might seem completely out of the question for most guys in 2018 but I found the watch to look perfectly adequate on my 7-1/4 inch wrist, especially when pairing it with something like a casual sport coat. Throughout this review, you’ll also see the watch on my wife’s wrist, which is fun because in a way, it makes the Timex Marlin reissue a kind of perfect “couple’s watch” – since it also served as a gateway for her to learn about hand-wound mechanical watches, movements, and the responsibility that comes with ownership and upkeep. I’m also quite impressed with how well the tall acrylic crystal integrates with the case and when viewing the watch at certain angles, it almost appears as if there’s more crystal than case. 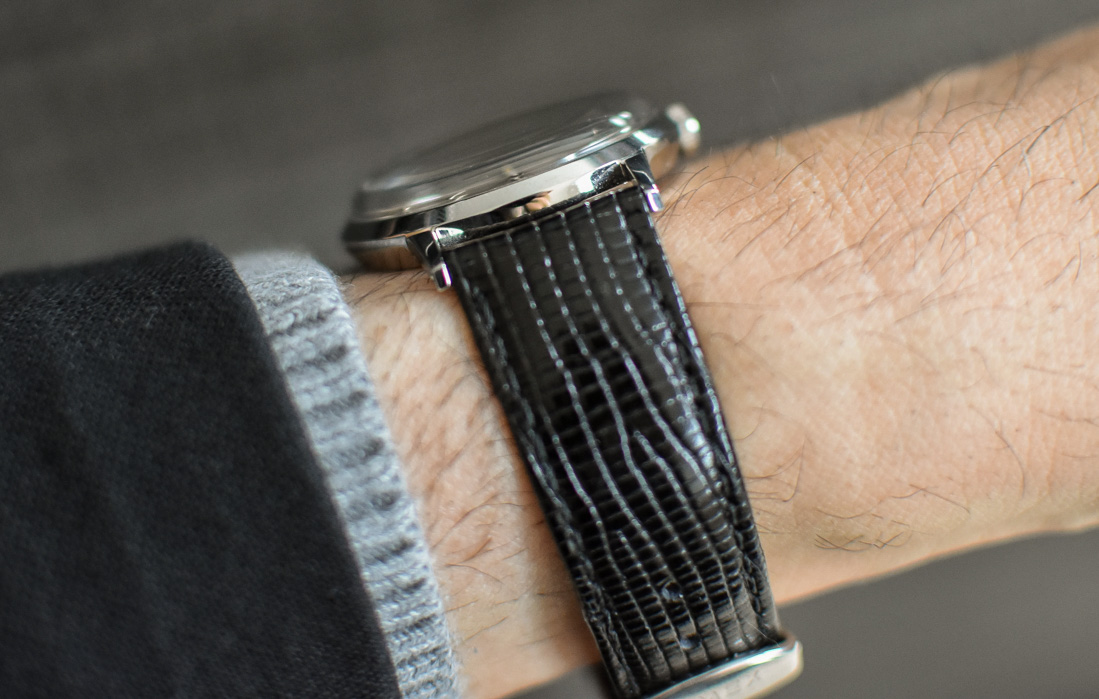 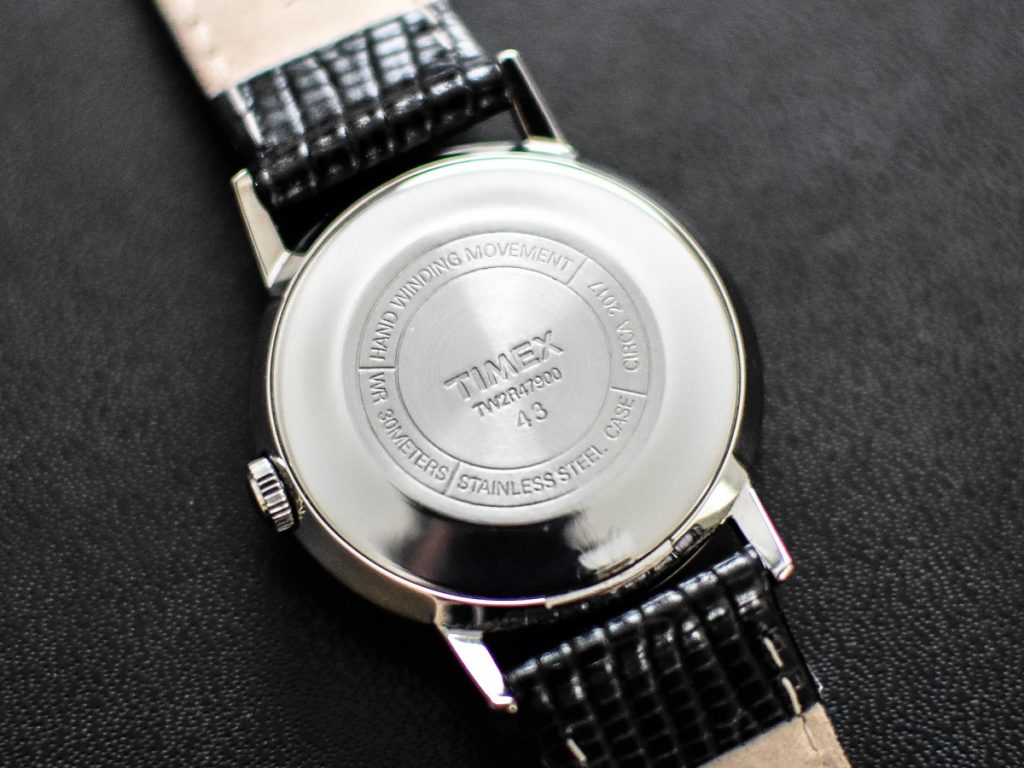 The entire case is also completely polished, which I guess is appropriate for a ’60s-style dress watch like the Timex Marlin. This can limit the watch’s versatility in a way but really, I don’t think most individuals would reach for this Timex if they’re headed out the door wearing a t-shirt and shorts. The lugs are drilled for easy 18mm strap changes, water resistance is 30m, and a simple, slightly undersized crown allows for… less than ideal operation. I just found it to be too small to really get a grip on and hand-winding was not as pleasant as I had hoped. 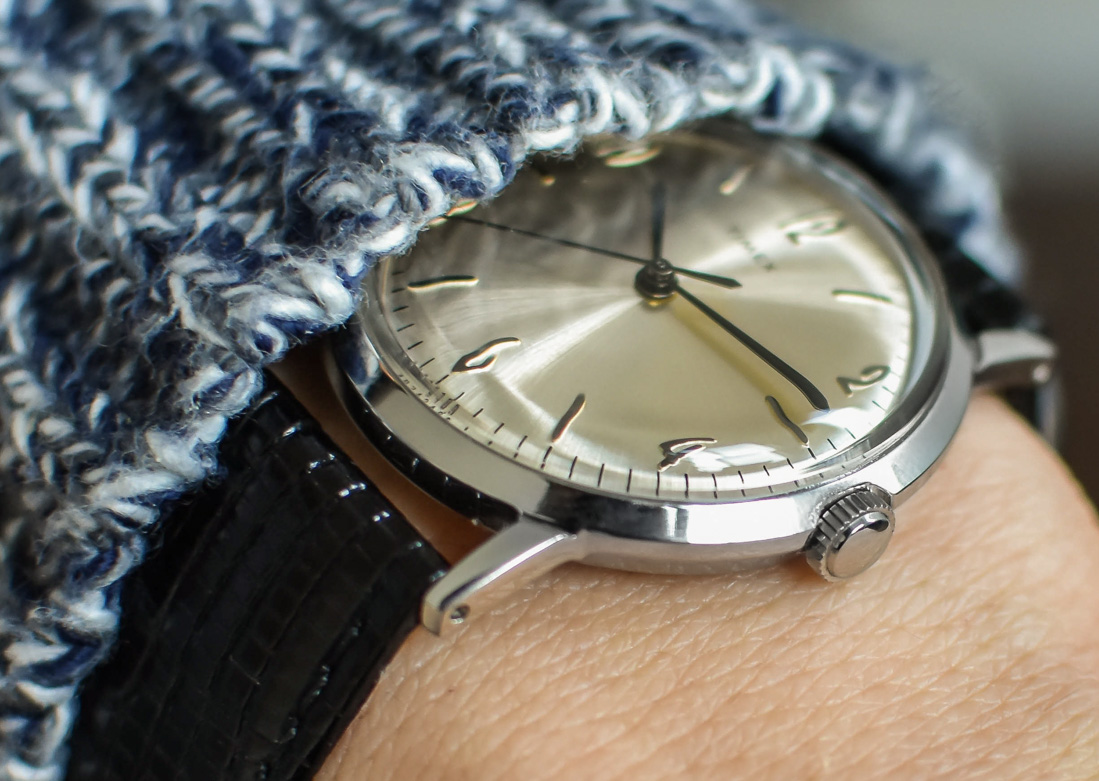 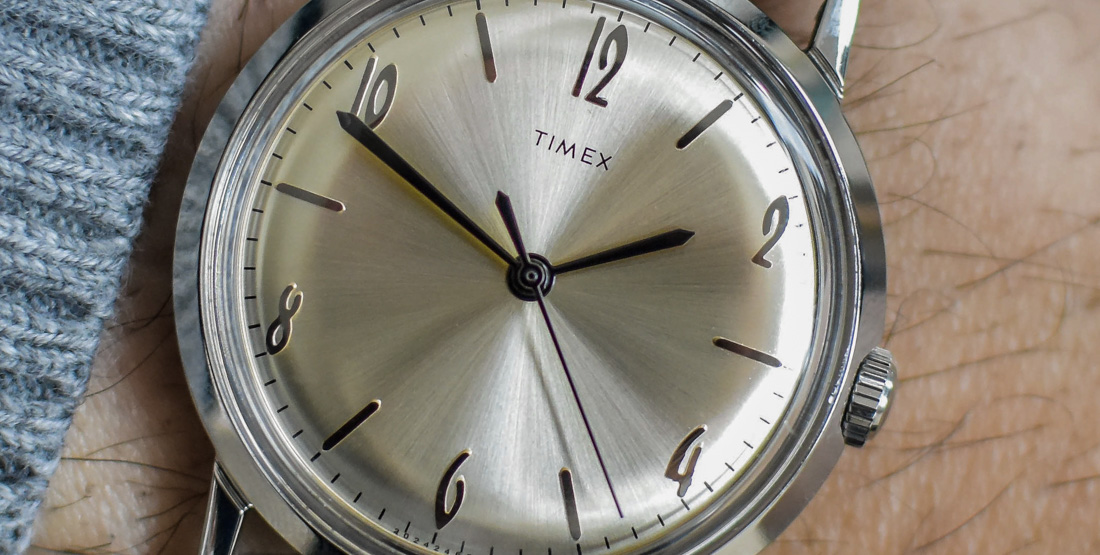 The Timex Marlin’s most impressive trait is its dial, by far. With basic ‘Timex’ text just under 12 o’clock and funky stylized Arabics for the even hour markers, the watch just feels like something you’d pull out Pop-Pop’s sock drawer. The real treat to consider is the generously brushed sunburst effect Timex achieved with the stainless steel dial. At times, the effect is pretty noticeable with champagne color tones gleaming beneath the watch’s very basic handset. In some instances, it can also appear quite flat and even dull. But, once again, I wasn’t expecting an insane amount of eye-candy out of the watch and I suppose one could really applaud Timex for basically creating an exact one-to-one recreation of the dials found on the original ’60s Timex Marlin models. 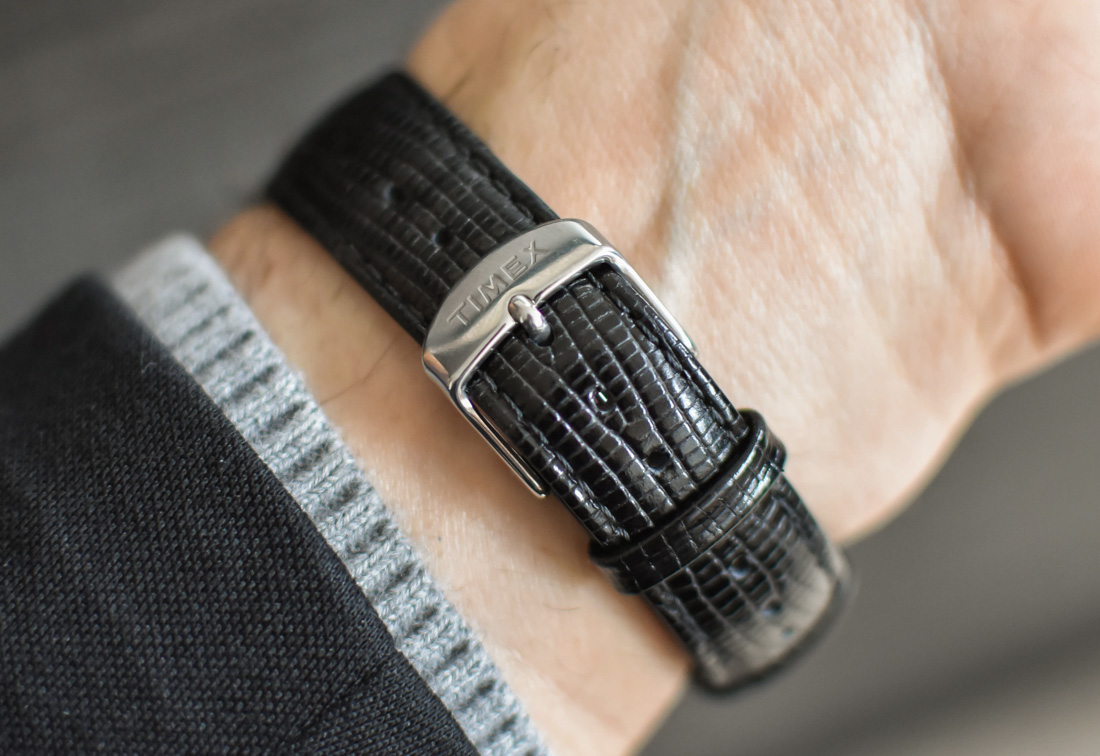 When cracking open the box and anticipating what kind of quality you’d get out of a $200 Timex hand-cranker, you don’t exactly expect much out of the strap. I don’t typically wear leather straps at all and when I do, I can be rather picky about overall construction. That said, the strap on the Timex Marlin reissue was fitting and, surprisingly, quite comfortable. I am however doubtful about how well it will hold up over time, as the quality of some of the stitching, especially on the underside, appears questionable, even rushed.

Still, the glossy black lizard-pattern is attractive and matches every other aspect of the Marlin’s look. As mentioned before, it’s 18mm in width, tapers down a bit, and features a simple pin buckle with an engraved Timex logo. It’s also worth noting that the strap is a little on the thin side. So if that’s a pet peeve, you might want to consider some kind of 18mm replacement. I think a cool vintage-style mesh or Milanese-style bracelet would actually take the look and feel to greater heights. 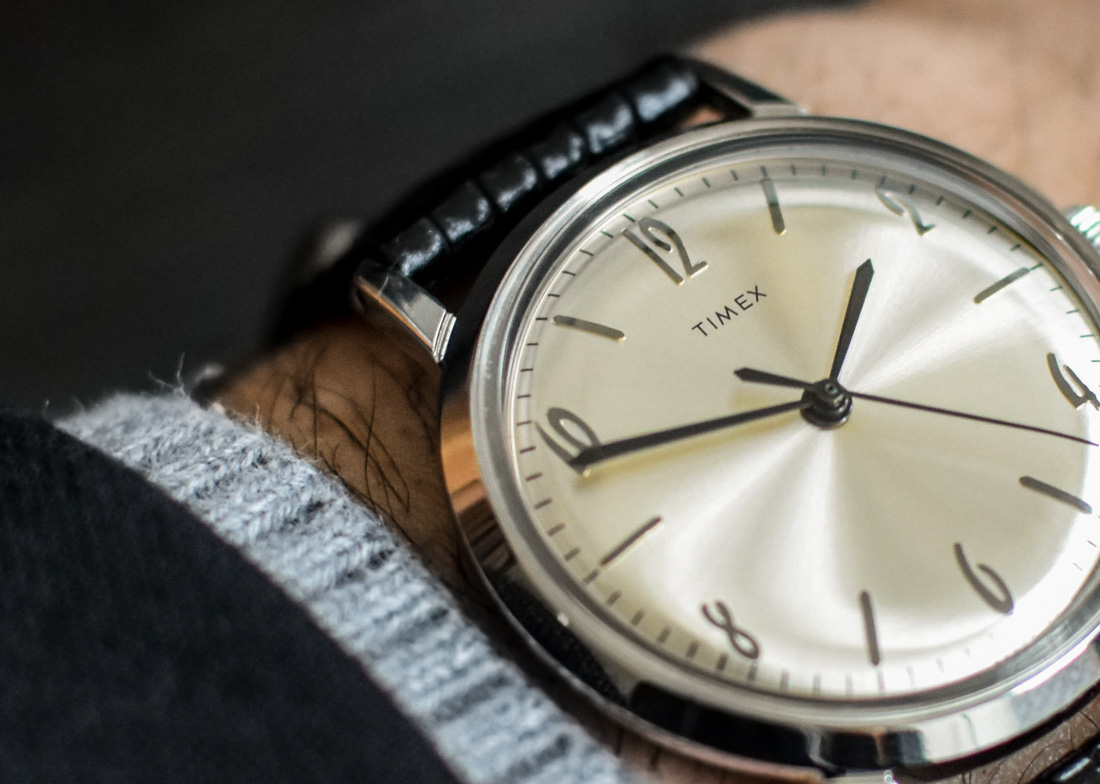 When the Timex Marlin reissue was first released, one of the biggest mysteries surrounding the announcement was the hand-wound movement and where Timex had sourced it from. For about a month it seemed, nobody really had any answers since Timex never specified what the movement was and all we got was the sticker on the watch that read “MOVT CHINA.” But, after emerging from the black hole that is Reddit, I’ve found that some users seem to suggest that Timex actually settled on the Seagull ST6 with the automatic winding mechanism removed. It’s an odd choice for sure but it gets the job done. 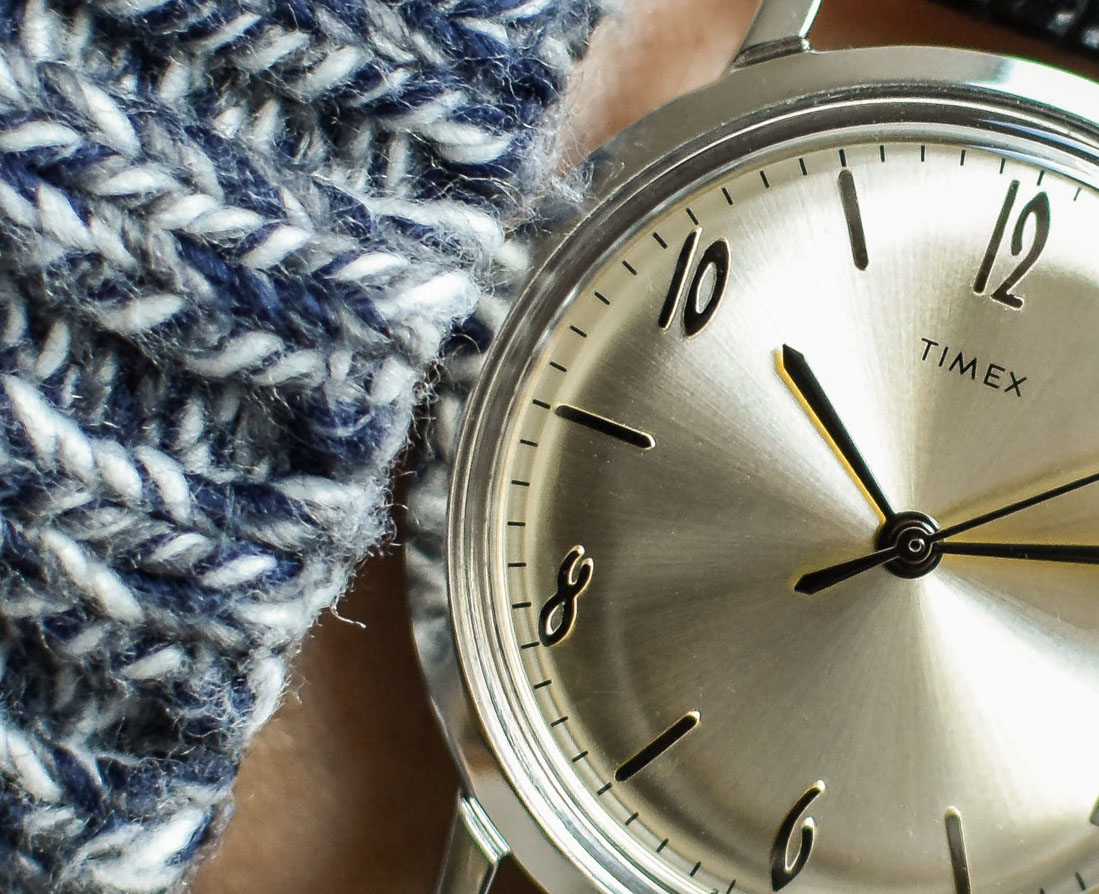 The Seagull ST6 is about as crude and machine-made as a movement can get. Luckily, this watch has kept impressively adequate time and runs at about +10 seconds per day. It’s a 17 jewel movement with a nickel balance, no built-in shock protection that I know of, and an operating frequency of 21,600bph. For a watch that I’d probably pull out of the box only a few times a year, this doesn’t really bother me. But, one has to wonder how much of a licking this thing can take before it stops ticking – especially since I can’t imagine these movements cost more than a few bucks a piece. 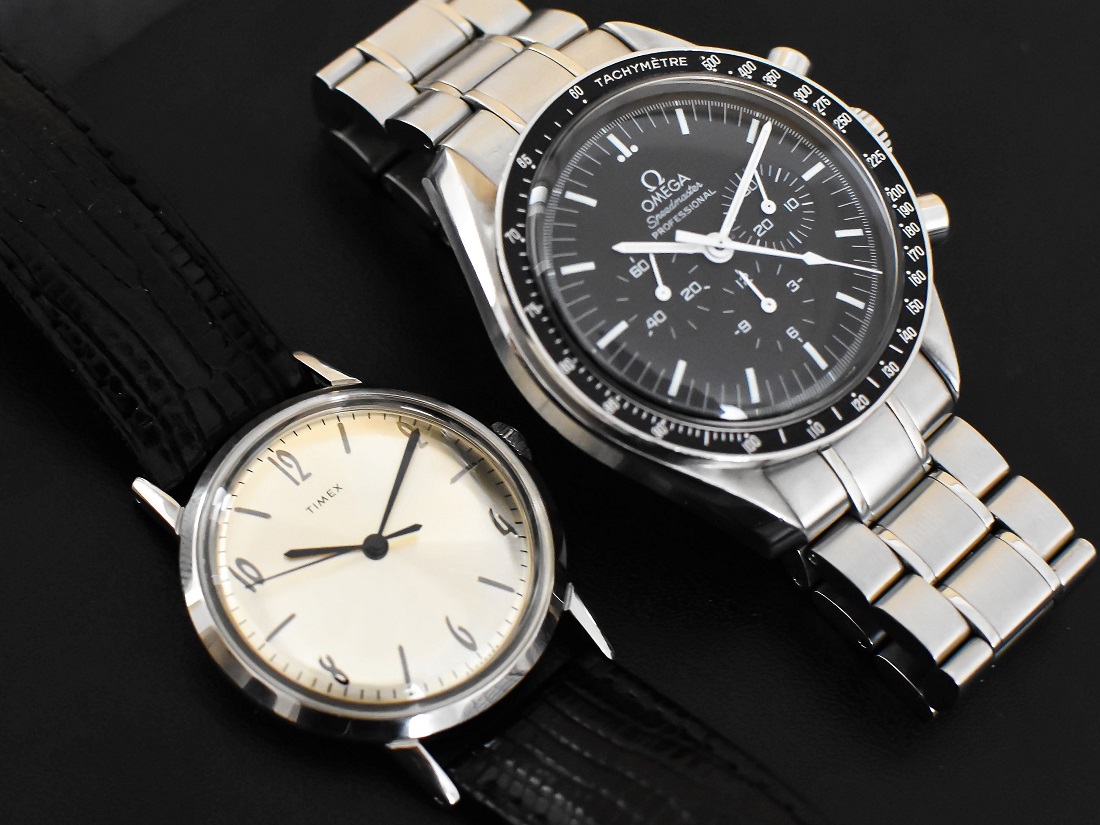 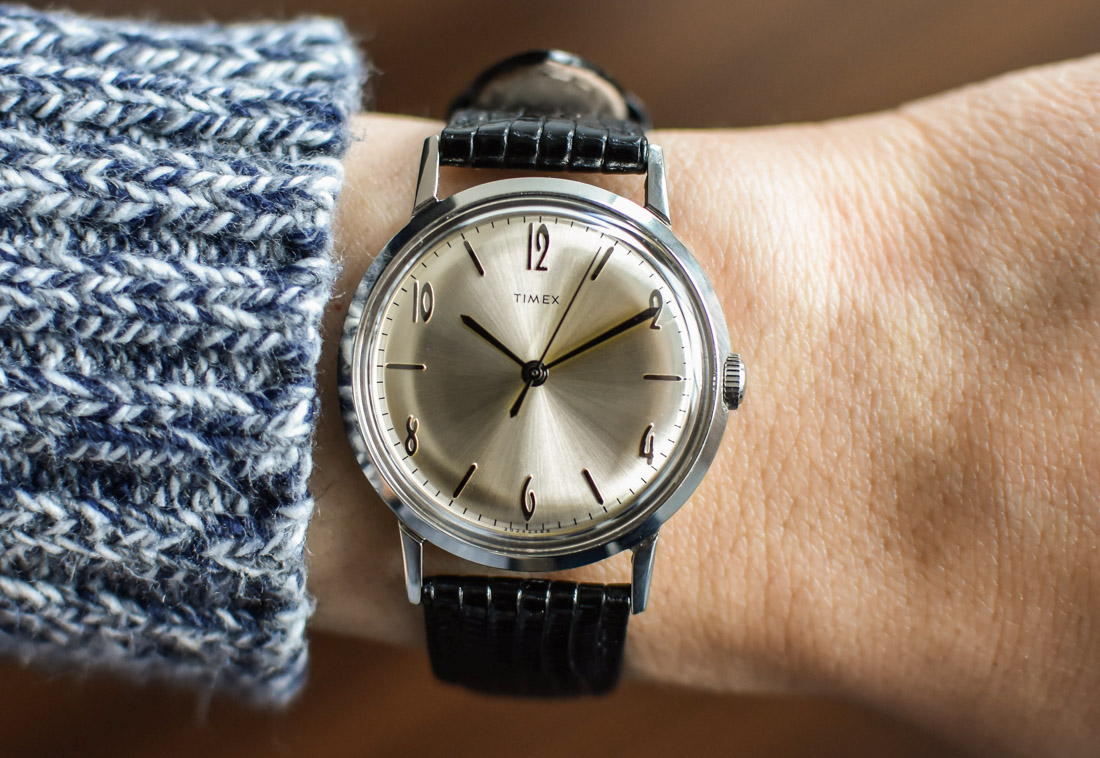 Overall I think the Timex Marlin reissue will continue to be a popular model for the brand moving forward. It’s a basic, time-only dress watch with real vintage appeal and a design that nails the look of Timex’s golden years. However, at $199 I think Timex has some serious competition to consider, especially from the recently released Orient Bambino Small Seconds models, which come at a slightly higher cost. Nevertheless, it’s exciting to see Timex experiment with releases like this Marlin and I hope to see even more improvements and cool vintage-inspired models in the near future. timex.com

Necessary Data
>Brand: Timex
>Model: Marlin
>Price: $199 USD
>Size: 34mm
>Would reviewer personally wear it: Yes.
>Friend we’d recommend it to first: Someone that’s into the vintage look of a ’60s watch but isn’t necessarily interested in the hassle of sifting through eBay and forums for half-broken original models.
>Best characteristic of watch: The unisex appeal, versatility, and faithful ’60s redesign.
>Worst characteristic of watch: Tiny crown is hard to grip and the strap could feature better construction. Odd movement choice.