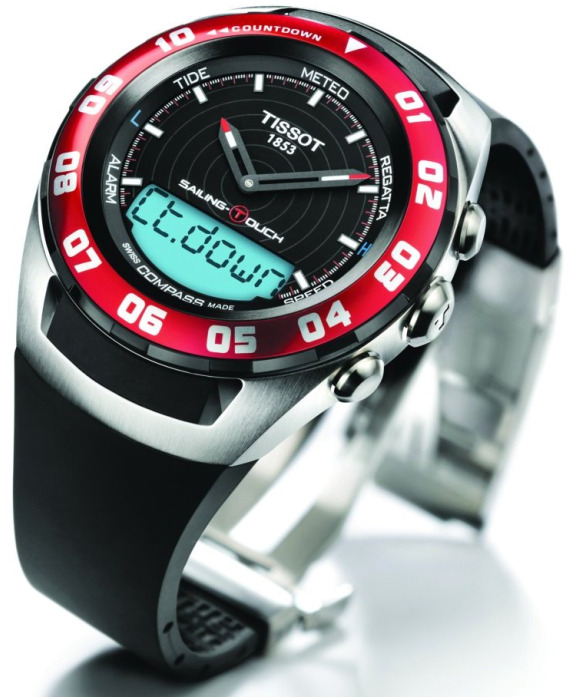 The super famous Tissot T-Touch line just keeps getting additions. Interestingly enough some of my most popular articles are those on the T-Touch Expert and the Sea-Touch. People love these things! Last year at Basel 2009 Tissot released a diving version of the T-Touch with the Sea-Touch, and now we will have the Sailing-Touch. Yes, the name of the models are getting less and less elegant, but the style is looking sharp, and the interesting new functions are always welcome. Interestingly, this new watch will feature a bit of a lower price as I understand it, with some luxury features as well.

First let’s look at the style. It is a real departure from the aggressive looks of the rest of the T-Touch line. The look is smoother and feels more like a boating instrument, but that is the point right? Here are two color varieties. Tissot indicates that initially the watch will be available with a lacquered white, navy blue, silvered, or black dial. In addition to an available rubber strap in white or black (with a steel deployment clasp), the watch will also be available with a more basic clasp (I think) as well. The design doesn’t lend itself too well to a metal bracelet, but perhaps one will come.

The case itself is in steel and 43mm wide – almost the same as the T-Touch Expert (but perhaps marginally smaller). Tissot here has departed from using titanium that was so popular with other T-Touch watches. The watch is water resistant to 100 meters. The case lugs look like loops – such as something you’d find on a boat. The rubber strap however is closely fitted to the case and there is no real gap in the loop hole. The design of the case lends itself to being very smooth, such that nothing on the watch will snag or pull at anything if you are moving around quickly on a boat. This also applied to the pushers that have smoothed out like pebbles.

The watch bezel comes in three colors, red, silvered, or blue. Oddly enough, as an option, you can get the dial set with 19 Top Wesselton diamonds (about 0.85 carats). Why? Well not really sure. Cause rich people do most of the boating? This also applied to the watch dial. See the pictured blue and white watch and notice that the dial has duos of diamonds set as the hour markers. Does this really fit with the Tissot T-Touch theme? I have no idea, but I would prefer luminant coated hour markers over diamonds if I actually wanted the watch for a functional purpose. The red and black version above is clearly the “workhorse model.” The other version is for someone who sits on deck with a drink and casually asks “does anyone want to know which direction is north? I can totally use my watch to tell you that.” 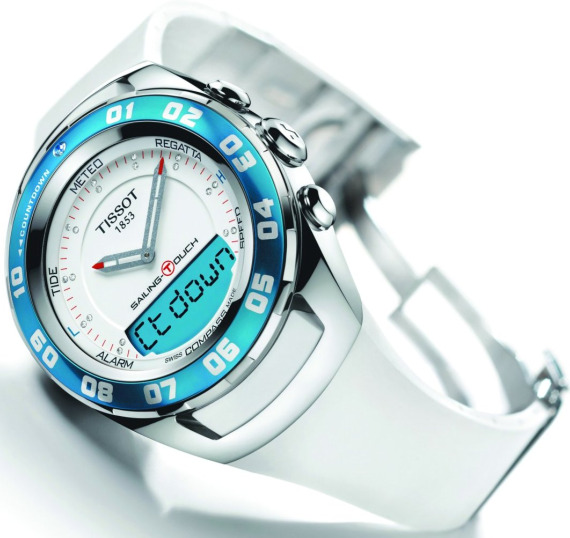 Don’t forget that what made the T-Touch watch great is its cool touch-screen sapphire crystal interface. You press the button located at 3 o’clock to activate the dial and push your finger on the name of the area that represents the function you want. Like the Sea-Touch, the Sailing-Touch features some functions that are very dedicated to the purpose of the watch. The Sea-Touch had features that were only useful underwater, and the Sailing-Touch has some new features that really require nautical activities to take advantage of. Basic functions include the time (analog and you can have the option of displaying it in the LCD display -which can also be used as a second timezone), a perpetual calendar, backlight, and a double alarm function with chime. The other features are more interesting or specially done for the boating or yacht racing theme.

There is a regatta timer function. This is basically a countdown timer, that counts down 10 minutes. When in these modes, the watch hands move, and are used as indicators for the special functions while sometimes the LCD screen shows the time digitally. Regatta mode has the hands come together and move across the bezel that has a 10 minute countdown scale on it. Regatta timers are used at the start of yacht races where boats must time their position getting to the starting line. 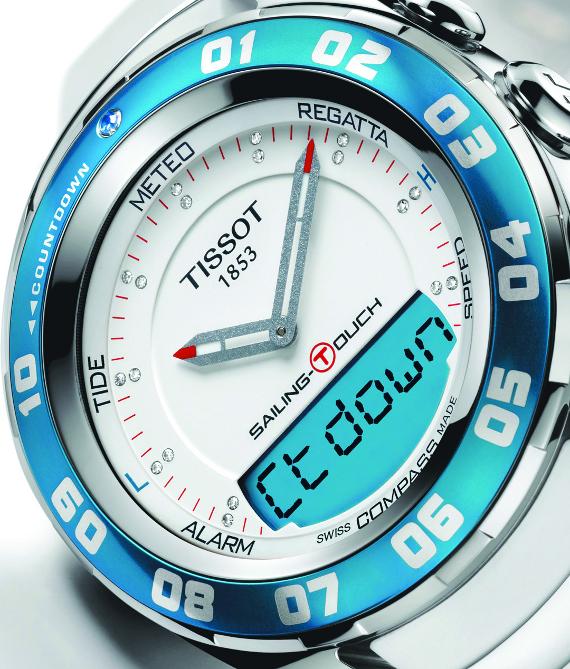 Next is the Meteo (barometer) and Compass modes. These are pretty straight forward, though the Meteo function has a 6 hour histogram that helps you predict the weather and whether it will rain. Compass mode is always cool to use as the hands of the watch turn into the compass needle.

The Tide function is cool because it takes into account the time and date in combination with a port that you set to determine tidal data. That is another important piece of information for boating enthusiasts as the function tells you the times of high and low tides. It should also help you know whether the tides are coming in or going out.

Speed is the chronograph mode, but is combined with a tachymeter scale to help you estimate speed. This is done by using two relative mile marker points (or other distance markers perhaps) in combo with the chronograph. Basically you measure the time it takes for you to go one mile, and a scale will tell you the speed digitally in the watch. I am sure this function can also be used as a normal chronograph.

So there you have it, all the cool stuff that this boating Sailing-Touch watch will provide when it is released soon. Style is modern and fitting with the theme. It is masculine, but won’t alienate women either. The movement is specially made for Tissot by ETA and is quartz (both ETA and Tissot are owned by the Swatch Group).  Price has yet to be announced by should be in the $1000 range (not sure about the price with diamonds though). While it is hard to say just what boating enthusiasts are looking for, a watch like this could quickly be adopted as a sailor’s good friend if the functions are easy and accurate enough to use.