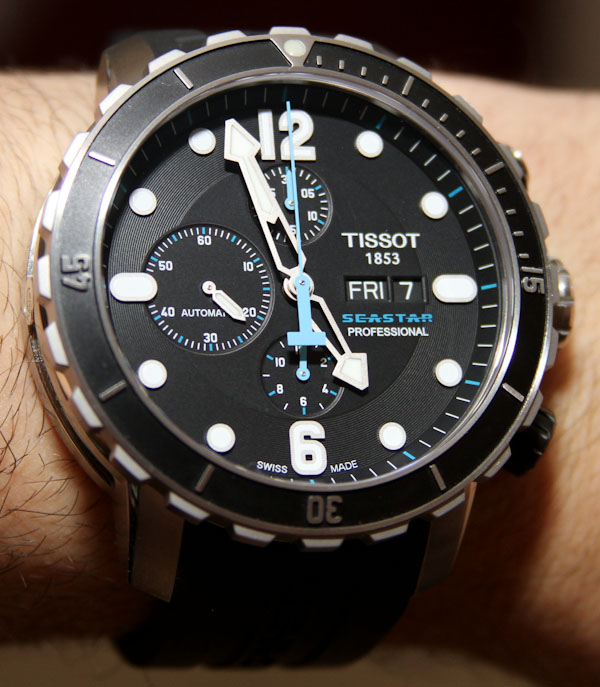 If you are in the market for a new mechanical Tissot dive watch then this is the model you probably want. Tissot released this limited edition model as a higher-end version of the standard SeaStar 1000 Chronograph (which we covered here). At first glance the two are deviously similar. It does beg the question why Tissot released the higher-end models at all, but I am glad that they did because this is one great Tissot diver. 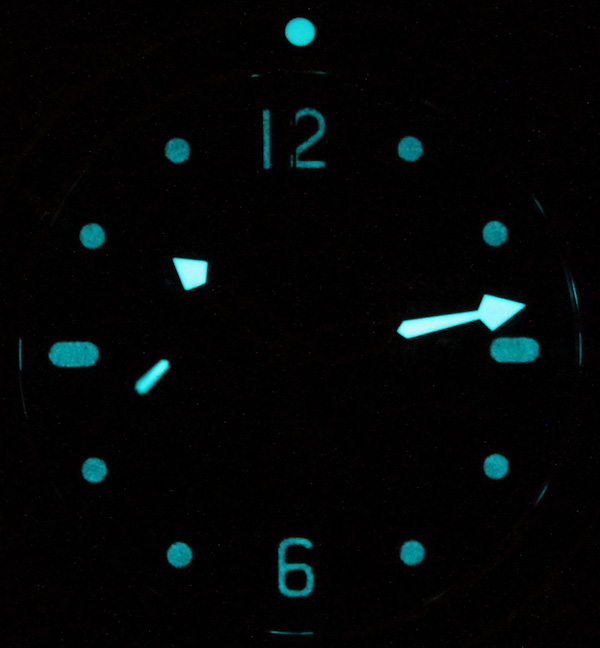 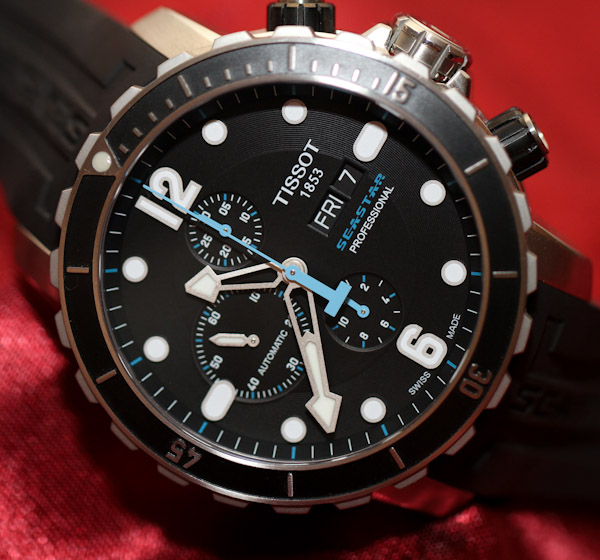 The limited edition SeaStar 1000 Chronograph Valjoux is a hair larger than the standard model at 49mm wide versus 48mm wide. You can’t really tell the size increase, but it is there. These are both large watches but with stubby lugs they are meant to sit on most wrists. The dial looks rather huge thanks to the thin vintage style rotating diver’s bezel. That bezel is one of the first places you’ll see a quality increase over the standard model. The bezel is made better with sharper engraved numerals and a more secure feel.

Both feature steel cases, but the finishing, polishing, and detailing are all better on the Valjoux model. However, both have 300 meters of water resistance and sapphire crystals on the front and back. I do think that the Valjoux model has better AR coating though. Features on the case are the same, but again the quality is better on the Valjoux. The watches have automatic helium release valves built into the left side of the case as well as screw-down security chronograph pushers. I like the large-sized crowns that are easy to grasp and operate. They are screw-down for water resistance of course. 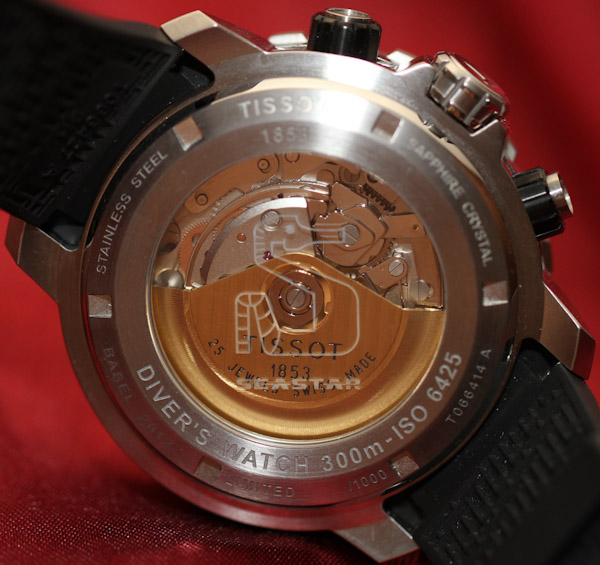 The difference between the movements is a bit significant. The standard SeaStar 1000 Chronograph uses the budget-priced Swiss ETA C0.211 automatic chronograph movement, while the limited edition model uses the tried and true Swiss ETA Valjoux 7750 automatic movement with a gold-toned automatic rotor, both seen through the casebacks (I like the printed SeaStar logo and seahorse printed on the Valjoux version’s caseback window). Neither of the movements are what I would call “fancy,” but for sure, the 7750 is a better movement. ETA tried to make the distinction between the two movements a bit more pronounced in terms of function by having the C0.211 be a six hour chronograph versus the 12 hours of timing for the 7750. This is actually a very arbitrary distinction technically speaking, but I get why they did it. Also, the 7750 is a day/date movement while the C0.211 only shows the date. This is reflected on the dial of the watches accordingly.

The SeaStar 1000 Chronograph Valjoux (by the way the “1000” part of the name comes from the watch’s roughly 1000 feet – versus 300 meters – of water resistance) indicates that it satisfied ISO 6425 standards for being a true dive watch on the rear of the watch. The standard version might pass as well, but Tissot wanted to make sure you know that for the limited edition model. Attached to both models is a rubber strap. The quality thereof is better for the Valjoux model. The standard model does come with a metal bracelet option that is not available for the limited model. 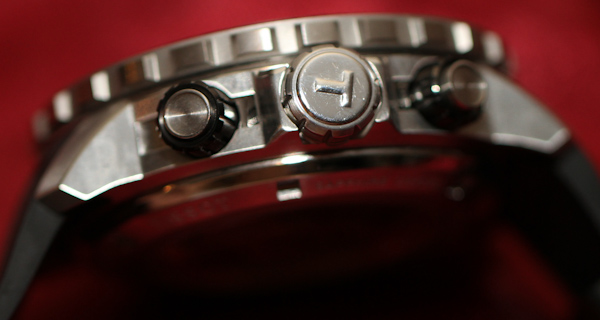 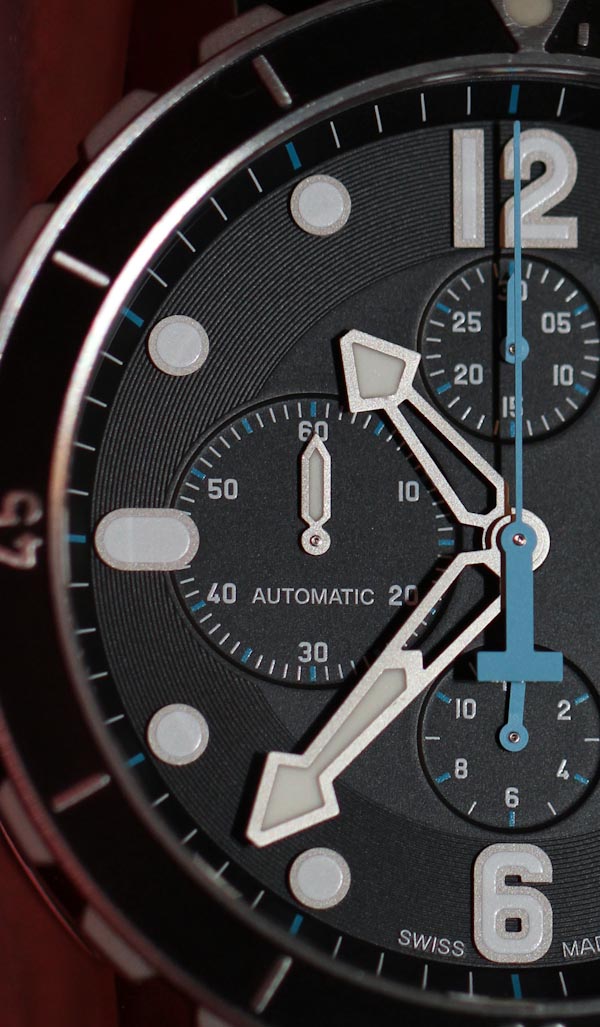 Easily the best part of the SeaStar 1000 Chronograph Valjoux model is the dial. This is an incredible upgrade over the standard model which is frankly cheap looking by comparison. You do need to have a basic like of the design, but the quality and legibility are outstanding for the limited piece. The matte black dial has some peripheral snailed texturing and more recessed subdials compared with the standard model. The limited version also includes applied hour markers with excellent lume. The applied hour markers make the piece look ten times better in my opinion. You can see little differences in the hands (such as the subsidiary seconds hand), as well as the text on the dial. Apparently the Valjoux model is “Professional” (whatever that means). As I mentioned earlier, the dials do look really similar at first glance, but upon close inspection there are all these numerous differences.

Tissot will produce just 1000 pieces of the SeaStar 1000 Chronograph Valjoux limited edition model. It really feels like the watch that Tissot designers wanted to make originally but were restricted by pricing concerns with the standard model. Somehow they got the green light to make a limited version of the high-end piece that they wanted to make. It is a surprisingly good watch and is among the higher quality Tissot mechanical watches I’ve ever had the pleasure of wearing. The visual similarity the limited edition model has to the standard model is rather amusing, but perhaps adds charm and mystique to the collection. Retail price for Tissot SeaStar 1000 Chronograph Valjoux limited edition watch is $2,250.