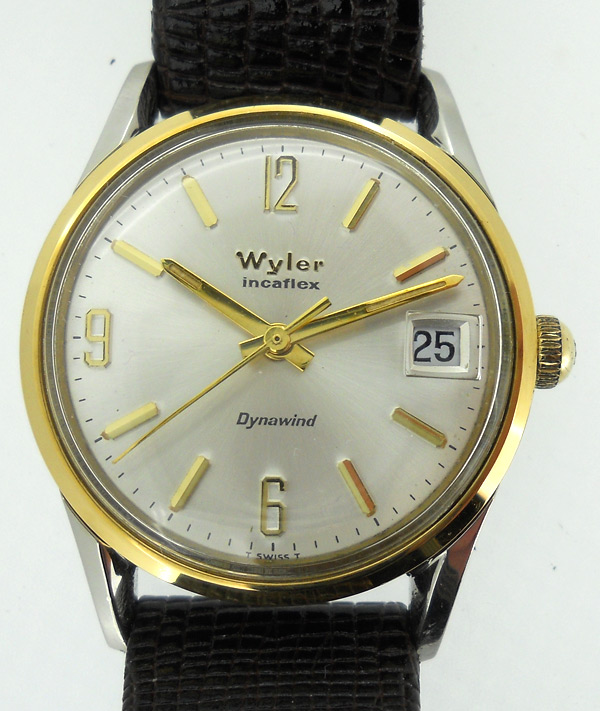 Legend has it that during a party, Breguet, with an eye for theatrical publicity and intending to draw attention to his new watch, created a stir by dropping it on the floor. In Breguet’s time this would usually mean a broken watch, but it featured the “parachute” shock resistance that he’d been working on and he demonstrated how it was able to still function thanks to his new mechanism.

Due to the inherently fragile nature and exact tolerances of mechanical watches, physical shocks are probably its greatest enemy. The balance assembly being the most vulnerable part. Your mechanical watch might be able to withstand all manner of other abuses but drop it on the bathroom floor and you could be looking at an expensive repair bill.

These days there is even an ISO standard for wristwatch shock resistance but it wasn’t until the 1920’s and 30’s that shock resistance mechanisms in wristwatches were developed. One of the first and best known is the Incabloc system which in essence is very similar to Breguet’s solution. Other ways to combat shock were also developed. Wyler Geneve in the 1920’s, brought out its Incaflex balance wheel which was protected along its diameter by two curved elastic arms to absorb any shocks.

Wyler watches gained a reputation for toughness and they devised publicity stunts involving tall iconic buildings to enhance this reputation. In 1956 two Wyler Incaflex timepieces were dropped 300 meters from the Eiffel tower and shown to be fully functional. Likewise in 1962, six watches were dropped from the Seattle Tower with the same result.

Incabloc’s system though remained the most common. But shock resistance in wristwatches took a while to become universally implemented and well into the 1950’s broken balance staffs were one of the most common causes of mechanical failure. Incabloc’s patent failed to protect its design and many other similar systems were developed. Well known ones being the “Kif” system used by many and Seiko’s “Diashoc” and Citizens “Parashoc” systems.

Rolex have since developed their Paraflex system which they say has a 50 percent greater resistance to shocks as well as developing a hairspring made from niobium, zirconium and oxygen alloy with 10x more shock resistance than ‘traditional’ springs. Swatch also developed something called ‘Nivachoc’ which is said to reposition more precisely after a shock and first came to notice when it was used by Breguet in 2006.

One of the most recent developments in shock resistance came in 2007 with Ulysse Nardin’s “Innovision” watch, in which the elasticity and superior dry friction properties of silicon were used to create a new shock absorbing system. 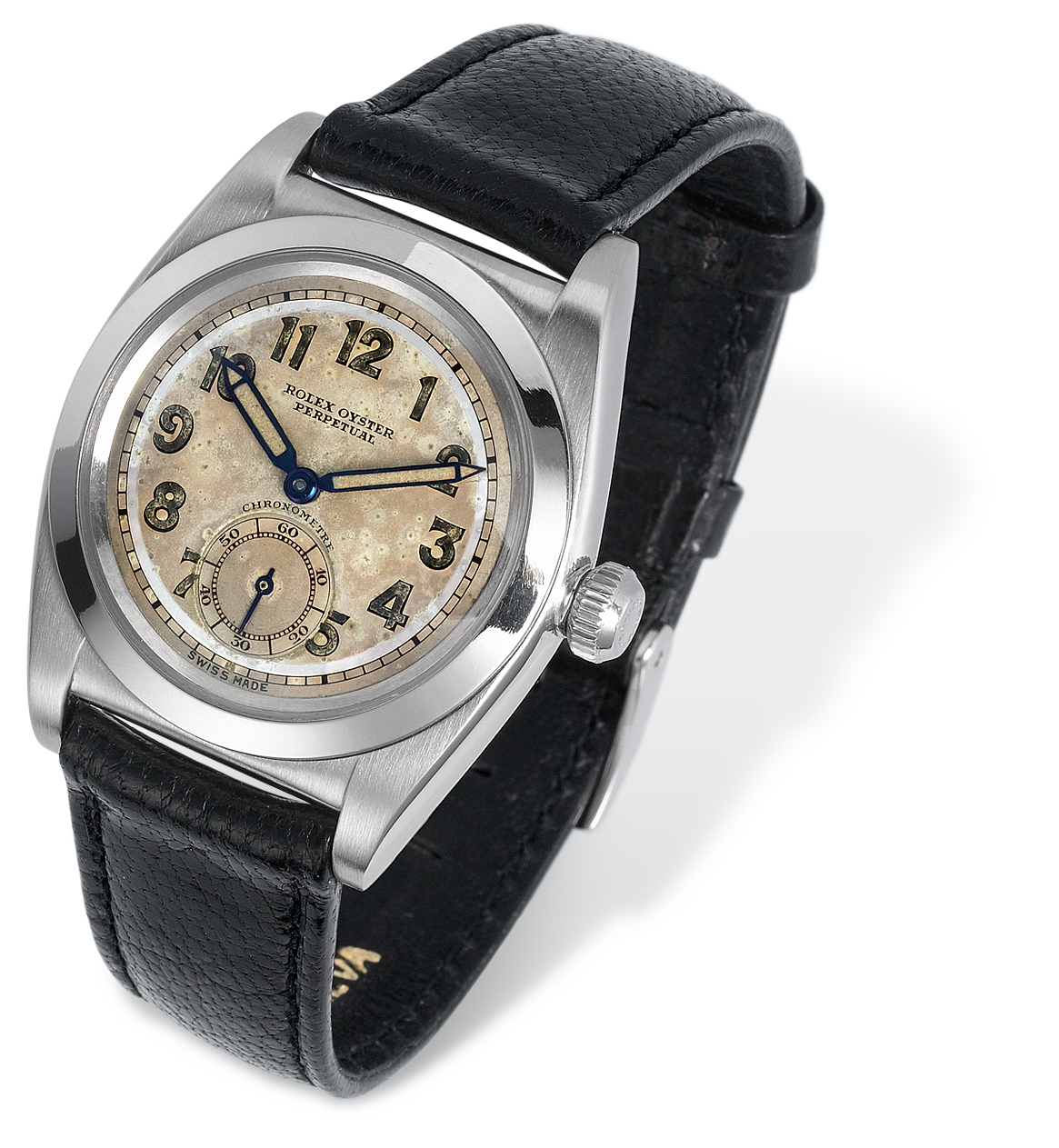 Using a semicircular weight that rotated 300 degrees and ran into a spring bumper which the wearer could feel, it was known as the “bumper” design. The watch would run for only 12 hours when fully wound and the time was set using the bezel since it didn’t have a traditional stem winder. With financial backing he went on to produce many thousands of watches based around his new mechanism but unfortunately due to the British economic depression of the 1920’s and 30’s, went bust and the Harwood company folded in 1931 allowing other companies to use the design.

Head of research and development at the Rolex Bienne factory, Emile Borer, further developed Harwood’s design and used it as the basis for the Rolex caliber 620 Oyster Perpetual. Modifications were made so that the rotor could rotate a full 360 degrees in both directions. This not only increased the energy stored in the mainspring so that it would run 35 hours, but also made it feel better to wear. The result in 1931 was the first really practical and long lasting self-winding wristwatch the “Rolex Oyster Perpetual” a watch model we are all now very familiar with.

The benefit of combining the Oyster case with the newly developed automatic movement was that now the watch didn’t need winding every day and the crown was only used to set the time, which meant the crown’s waterproof sealing was rarely disturbed and it was also less likely that the owner would forget to screw it down. 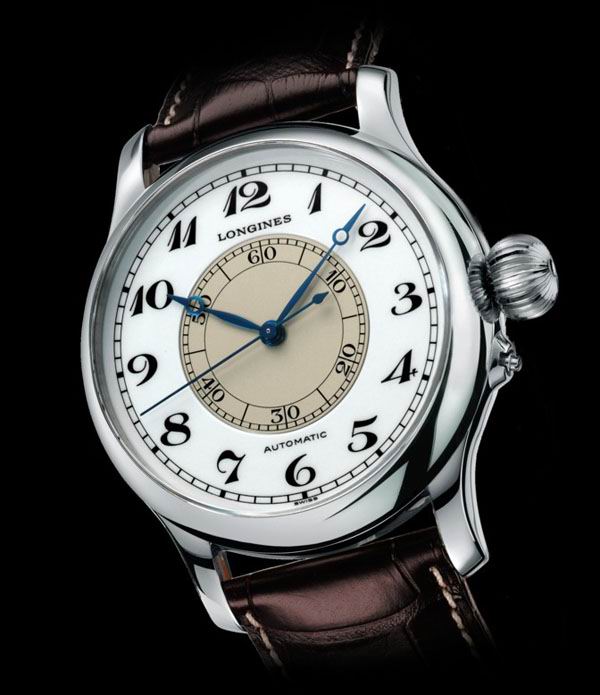 In 1919, three planes attempted to fly from Newfoundland to London, only one of them made it. It was after witnessing this tragedy that one of the fathers of modern navigation, Captain Philip Weems of the U.S. Navy, was driven to improve methods of flight navigation.

It was not possible to use the same methods employed by seafarers so Weems set about devising new tools and navigational techniques.

Chronometric precision was rare back then but accurate time reading was crucial because with the high speeds and long distances involved, to be off by even just a few seconds, could prove catastrophic.

To solve this problem Weems came up with an ingenious solution: the Second Setting Watch. Since no watch could adjust the seconds hand to the dial, Weems solution was to adjust the dial to the seconds hand. To achieve this he created a movable dial marked with 60 second increments and consequently enabled a navigator to read truly accurate time.

The second part of what was to become the “Weems System of Navigation”, was the invention of a modified sextant to be used when the horizon wasn’t visible. Aviators in the 1920’s and 30’s were now able to navigate with much greater accuracy and fly with less risk by using Weems system. 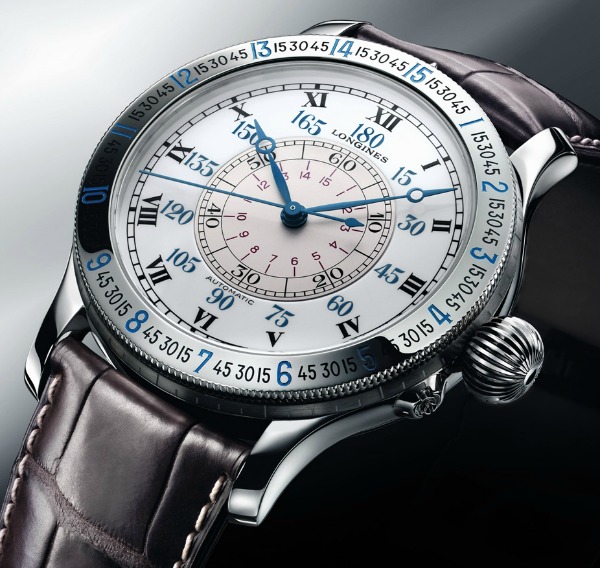 It was Longines’ involvement in aviation –  they were official timers for the first solo flight across the Atlantic in 1927 –  that was to lead to a partnership with famous aviator Charles Lindbergh to create the Hour Angle watch, a derivation of the Weems watch.

Lindbergh wanted to push Weems’ idea of a navigational watch still further. He was concerned about the problem of determining the plane’s bearings during flight and put forward the idea of a watch that also gave you the ‘hour angle’ in degrees and minutes, enabling you to calculate longitude. Lindbergh was so convinced his idea would be a valuable aid to pilots that he even provided sketches to Longines. Longines were enthusiastic and a patent was filed in October 1931 for the Longines Hour Angle with rotating bezel.

The first version used a hand-wound pocket watch movement and had an extra long leather strap so it could be worn over thick flight jackets, and an extra large crown for winding it with gloves on. In 1938 Longines released a second improved version. Following its introduction, and up until the intervention of WWII, the Lindbergh design performed an important role in the setting of a number of new aviation world records.

The Weems Second Setting Watch and the Lindbergh Angle Hour Watch are both milestones in the development of pilot’s watches as well as being important navigational aids up until they were made obsolete by electronic navigational equipment. Longines produces authentic recreations of both these watches.

Page 2 of 4 Prev Next
Advertising Message