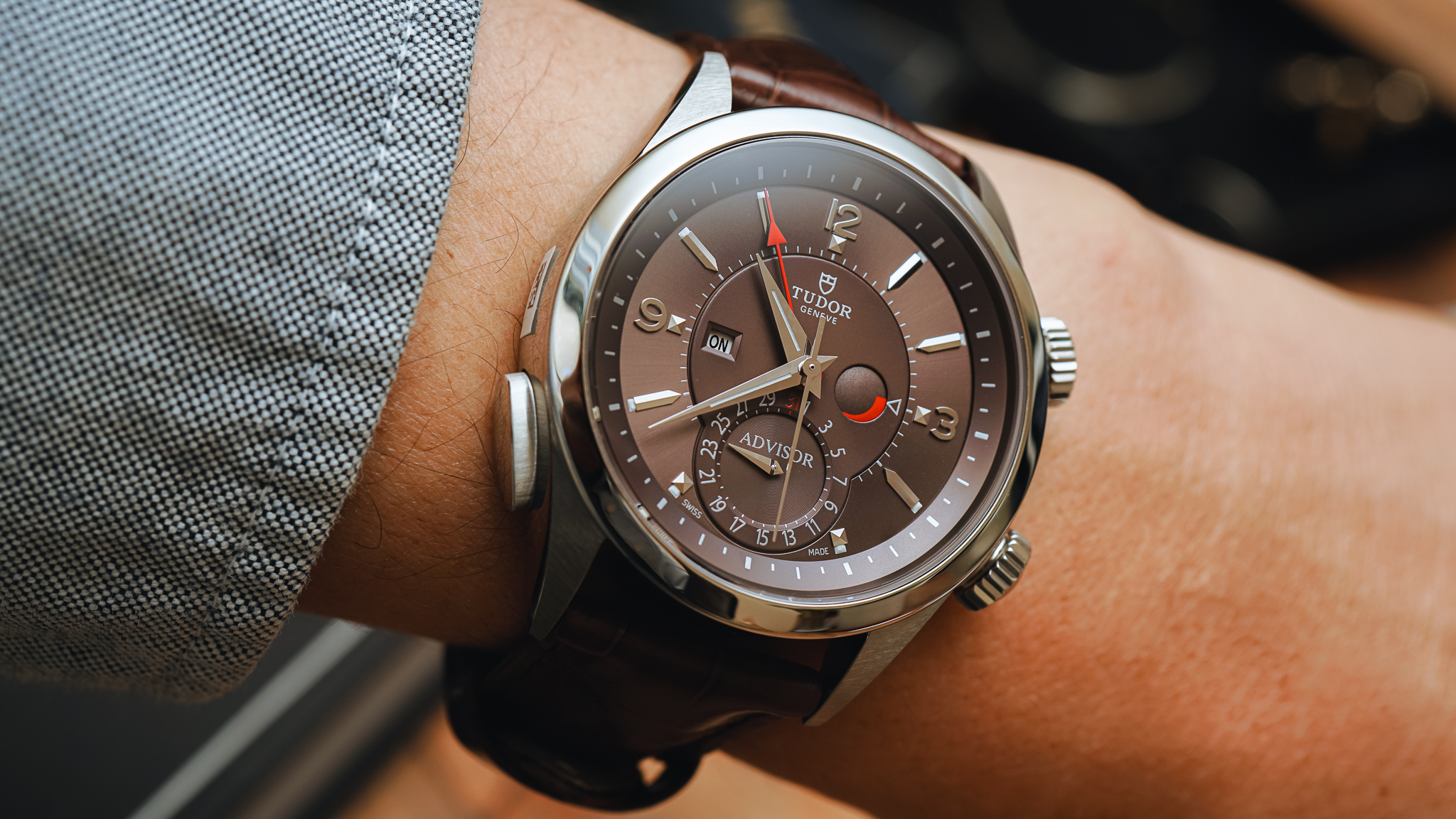 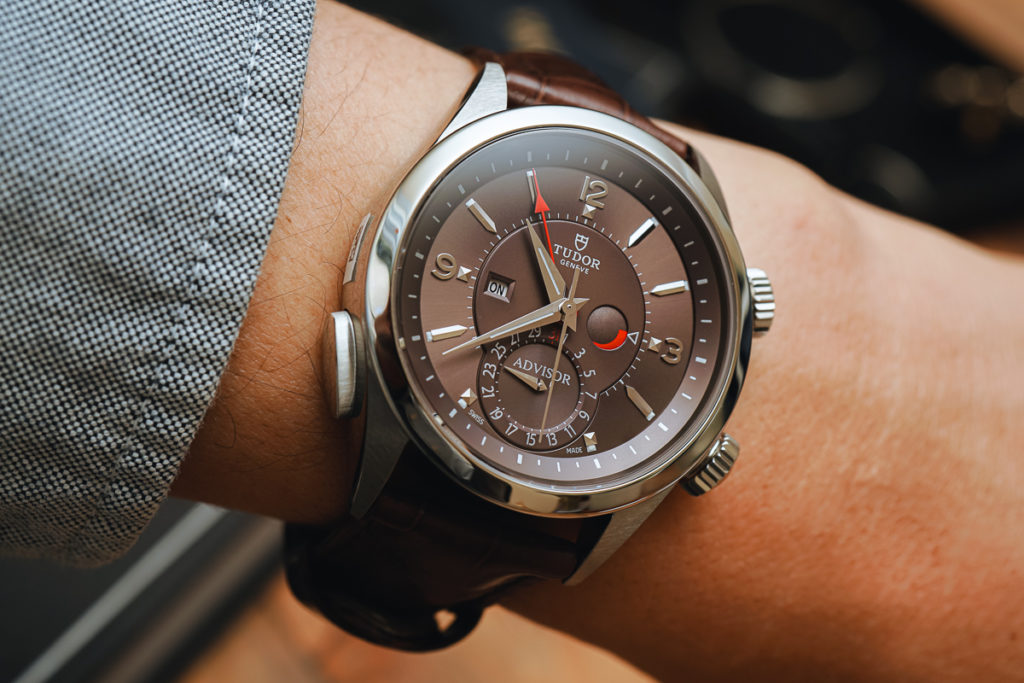 Apparently, the term “bandwagon” appeared in the English lexicon around the middle of the 19th century and has been used interchangeably as both noun and verb in playfully disparaging fashion ever since. The term easily pre-dates the Toronto Raptors, Arcade Fire, and yes, even Tudor Watches, who also find themselves deservedly experiencing a meteoric rise to stardom in the span of just a few short Baselworld release cycles, thanks to the popularity of the Black Bay. To be fair, there’s still plenty of room on the Tudor wagon, but let’s not forget that, just like everyone’s current favorite team or band, there’s an awful lot more to this brand than a single-player or hit single. Which is to say that Tudor, for the better part of the last decade, has quietly shown immense depth and character – releasing compelling and innovative elements like the Heritage Advisor that ultimately laid the foundation for not just the mass-market appeal of the Black Bay and its numerous iterations, but the current heritage re-issue trend as a whole. 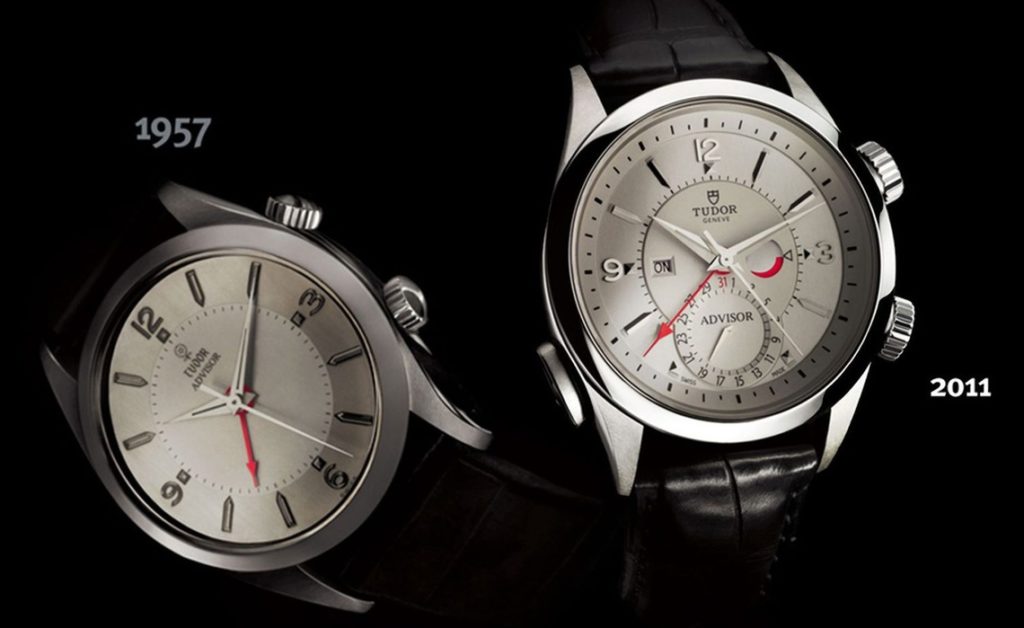 To call the Heritage Advisor the “best-kept secret” in Tudor’s modern collection probably wouldn’t be overstating things too much. For many collectors, there is a litany of options that might appeal first – which speaks to the depth of Tudor’s current line of offerings. Released back in 2011, well before the watch community reached critical mass on Instagram, before the vintage re-issue craze, and certainly before Tudor watches were even available in the United States, the Advisor was designed to pay homage to the brand’s emblematic alarm watch from 1957, also called the Advisor. But rather than simply re-issue the only watch from the mid-century Wilsdorf management era with an alarm function, Tudor sought to expand upon it — adding more technical features to improve the watch’s capability and overall wear experience for the modern man. And just as it was then, the Advisor remains Tudor’s most complicated watch in the catalog. 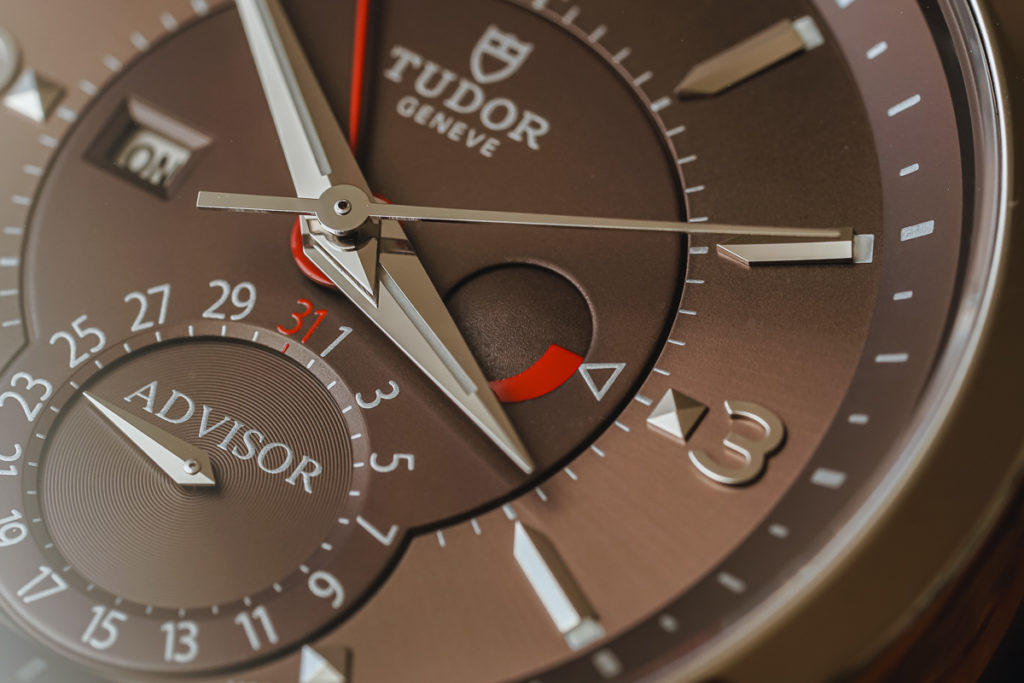 You could count on one hand the number of mechanical alarm watches (automatic or otherwise) that come in under 10,000 bucks. The perennial classic Master Memovox by Jaeger LeCoultre is perhaps the best known, starting at around $9,500, though a lesser-known alternative would be a hand-wound Cricket President from Vulcain, which retailed for around $5,000 — but whether or not that brand or its distributors are still in the game isn’t immediately clear. Also less known, Fortis had a very rare (and extremely finicky, if watchmaker rumors are to be believed) alarm chronograph that can be had on the pre-owned market for around the same amount of money, but its original MSRP was well north of $10k. The Heritage Advisor comes in somewhere between — with a starting price of around $6,000 on strap, it’s Tudor’s most premium offering, albeit priced well within reason for someone looking for this particular complication. Pricing or value aside, what is clear is that a mechanical alarm is far more of a novelty than even a mechanical watch – a quirky analog handshake to a bygone era extended by precious few brands in watchmaking, past or present. 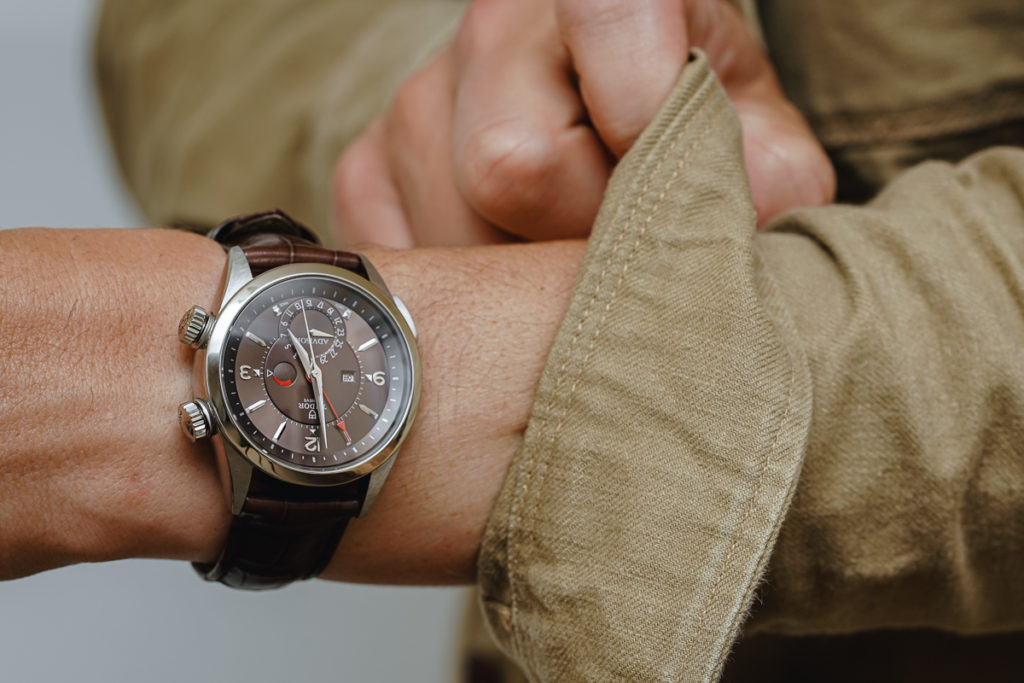 The original dual-crown Advisor was a relatively featureless, four-handed affair: it measured 34mm and featured a red alarm-setting hand, adjusted by the crown at 2 o’clock. Otherwise, there was little to give away the fact that something so unique hid beneath its silver dial. The modern iteration flips the script a bit – an Advisor in name and typography only. Here, we have an assertive 42mm titanium case with 100 meters of water resistance but one that wears comfortably, thanks to its light weight and modest 49mm lug-to-lug span. The watch is powered by an automatic ETA 2892 base that has been heavily modified with an in-house mechanical alarm module. It’s worth noting that, back in 2011 and prior to the MT-series of manufacture calibres, this was Tudor’s only in-house designed movement. 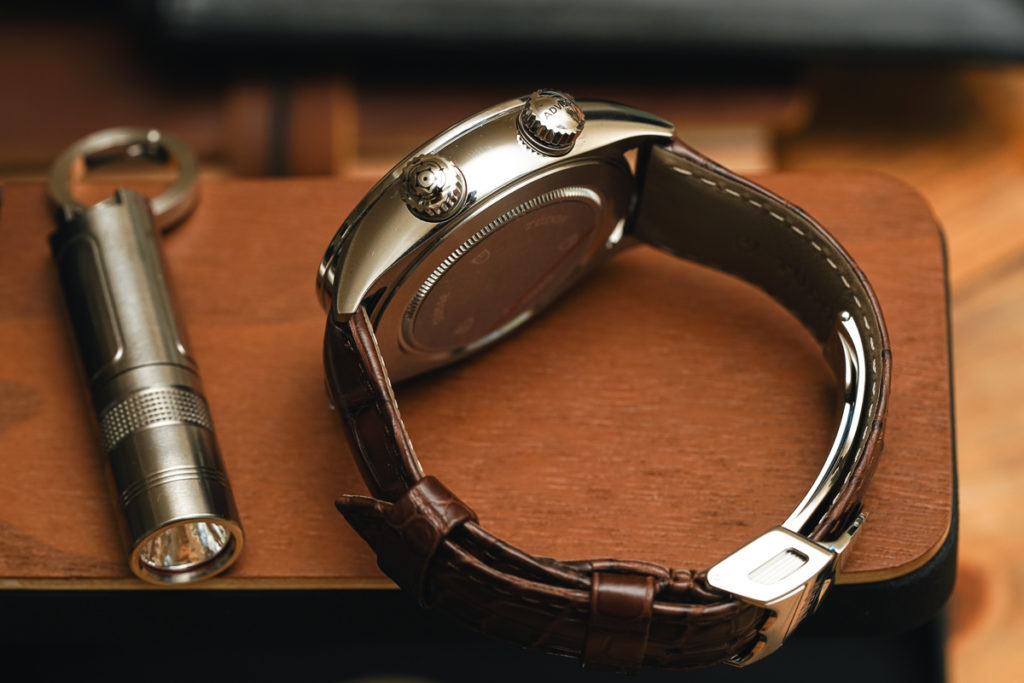 Like most any traditional automatic watch, you can wind, set the date (indicated at 6 o’clock), and set the time on the Advisor using the push/pull crown at 4 o’clock. The crown (also push/pull) at 2 o’clock is marked “Advisor,” and is used for all of the Alarm-related functions. Pop it into the first position to wind the alarm, filling up the red reserve indicator at 3 o’clock in the same manner one might wind a hand-wound watch. Pull it one stop more into the second position to adjust the red alarm-time-setting hand. Note that the chapter ring is only indexed for the 10-30-50 minute marks between each hour, which leaves a bit of imprecision in the alarm-setting process, should you aim to wake up at 6:03am. For the rest of us non-obsessive-compulsives, simply set it to the nearest 6 o’clock, pop the crown back in place, and click the pusher at 8 o’clock to arm the watch. 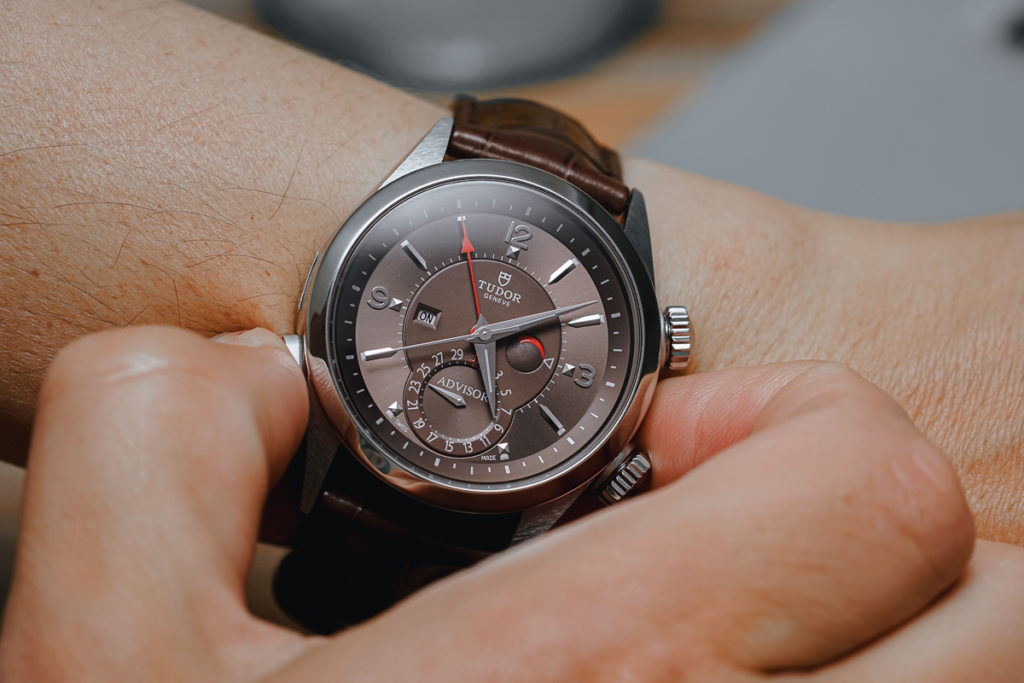 So what does a mechanical alarm sound like? Well, unlike the hollow digital chirps rendered by a quartz-powered G-Shock or Breitling Aerospace, options traditionally range from a frenetic insectoid buzzing (like a robotic cricket who’s had too much coffee) to a miniaturized firehouse alarm that might send those within earshot racing for their engines. And though it also depends whether the watch is being worn or not when the alarm goes off, the Advisor is much more of the “cricket” variety, as you’ll hear on our recent Instagram post. Listen closely and you might pick up on a light ringing that persists throughout the duration of its 10-second discharge – similar to the Seiko Bell-Matic from many years ago.

There aren’t many alarm watches to choose from to begin with, but there are even fewer that provide any indication that the alarm is on or off, leaving most wearers with a nagging sense of dread looming throughout the day. Is it going to go off during a funeral? In a movie theater? During meditation at the end of a yoga class? In addition to the Advisor’s power reserve giving you direct visual confirmation that the alarm has enough juice, the indicator at 9 o’clock gives you hard confirmation that it’s armed and ready. Both the reserve indicator and the pusher are crucial because the alarm time runs on a 12-hour basis, meaning one could set the alarm intending to get up at 6 am. But if this action were performed at, say, 4 pm the previous day, then the alarm would go off in two hours at 6 pm, likely causing a bit of a scare during dinner. Thankfully, the pusher at 8 o’clock can also be used to mute the alarm once it begins buzzing – definitely handy if its arrival comes as a surprise. Both indicators add a few more elements to the dial, but I’d say the added visual complexity is absolutely worth it to not have to play horological hot potato every time you want to set a reminder to wake up early enough to watch a Tour de France stage. 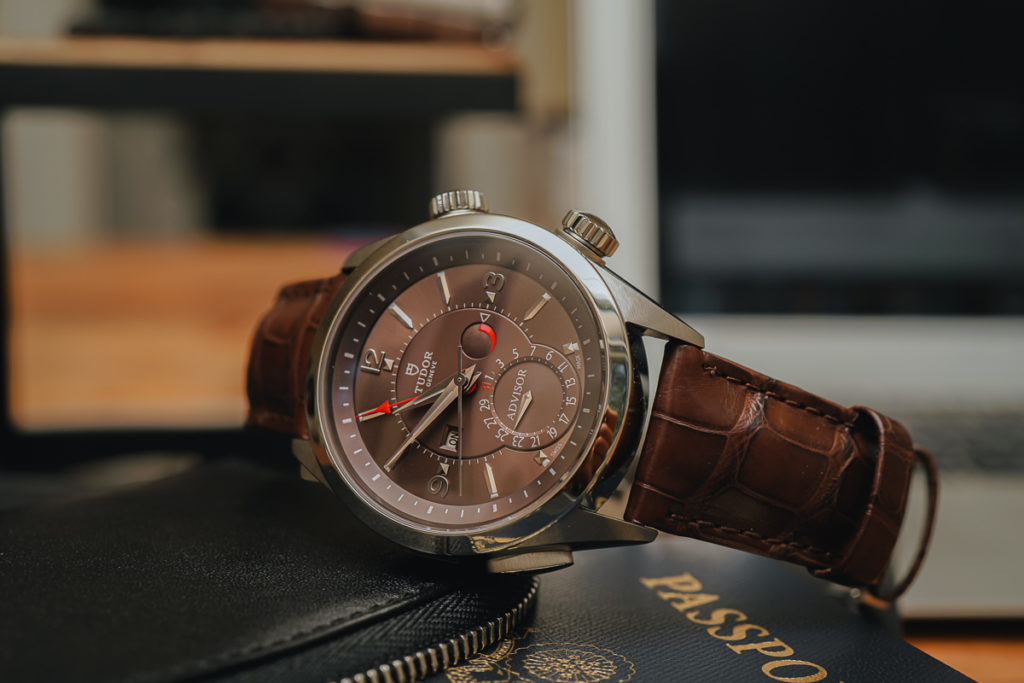 You could use the Advisor to set reminders throughout the day or week, but from a practical standpoint, I think the best way to use it is to set a single, recurring daily reminder that always falls at the same time (to wake up, to meditate, to walk the dog, etc.), that way, it’s just a matter of winding up the alarm after every discharge, and then using the pusher to re-arm it. My routine with the watch during the month of July became: 1) Set & wind alarm for the following morning. 2) Wake up, re-wind alarm, leave pusher in “off’” position. 3) Remove watch before bed, switch alarm to “on” and set on nightstand. 4) Remind wife not to freak out again when it goes off in the morning. 5) Make coffee and watch the day’s TDF stage. 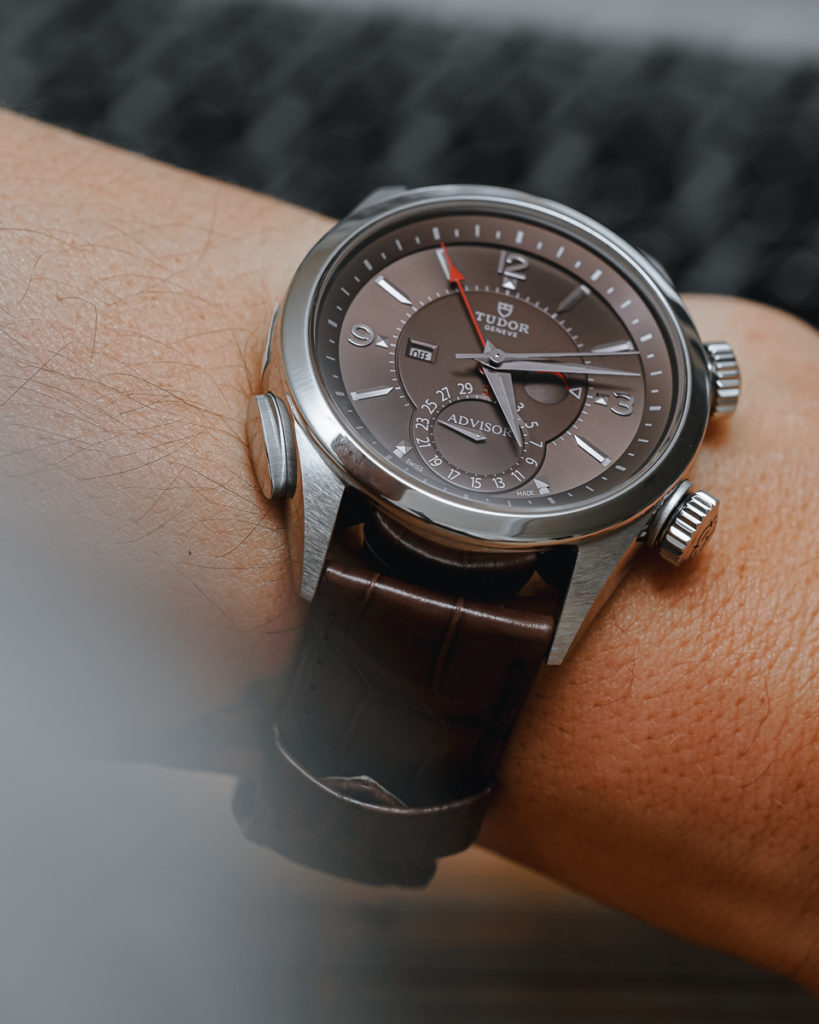 The Advisor is available in three dial options, including both silver and black, though I’d argue that the “cognac” option pictured here is the absolute knockout. Rich burgundy at some angles, and a cool gray at others, its multiple layers and contrasting matte and brushed textures between the outer and inner regions of the dial yield a fun, super-dynamic presence on the wrist. Unless you’ve worn the gorgeous champagne-dialed S&G models, Tudor simply doesn’t get enough credit for making excellent dials, but why would they, when most watch fans only know them for their more austere, singularly matte offerings found on the Black Bay or Pelagos dive watches? 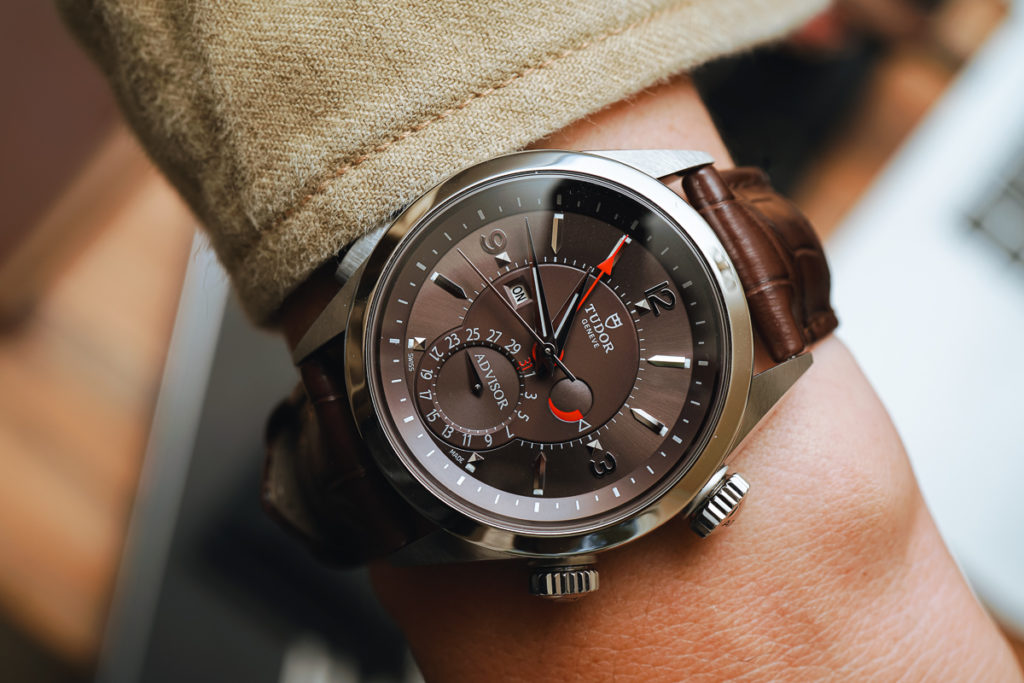 So for now, forget what you see on the Instagram-driven bandwagon – Tudor is far more than a one-hit-wonder, with interesting and innovative evergreen offerings like the Advisor that are absolutely worth a closer look. The price of the Tudor Heritage Advisor in the pictured configuration is $5,950. You can learn more about the Advisor mechanical alarm collection over at tudorwatch.com.