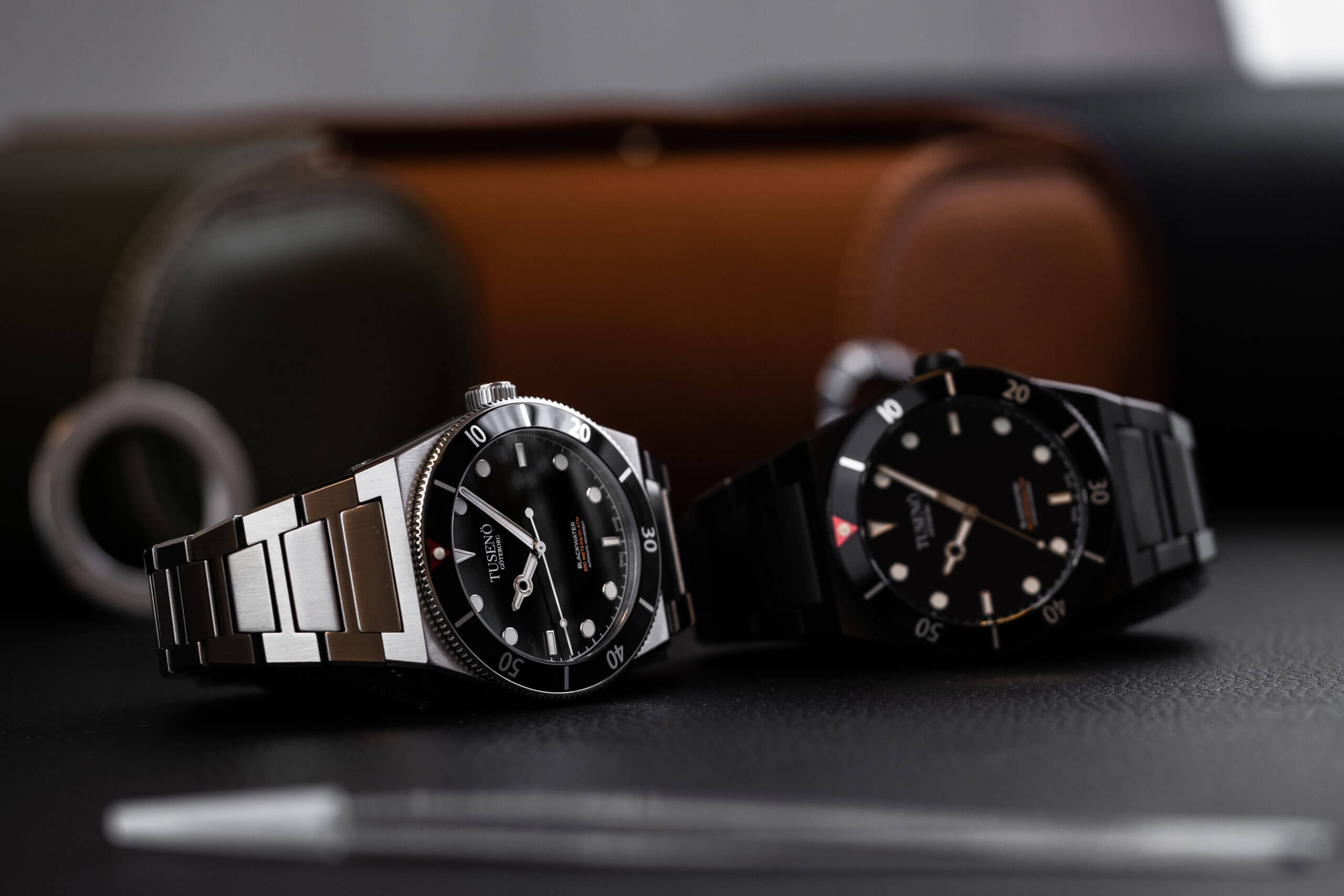 25 Comments
by SponsoredPost
Sponsored post presented on aBlogtoWatch by advertiser

In the present-day watch market, microbrands represent some of the most inventive and inimitable designs in production. Tusenö, a burgeoning operation based out of Gothenburg, Sweden, exemplifies this concept with their series of Blackwater divers. Combining design cues from archetypal models throughout history and coupling them with trends that are currently en vogue makes the Blackwater a refreshingly contemporary take on the sports watch. The implementation of reliable, time-tested mechanical components ensures that this razor-sharp timepiece cuts extraneous costs and carves a clever value proposition. 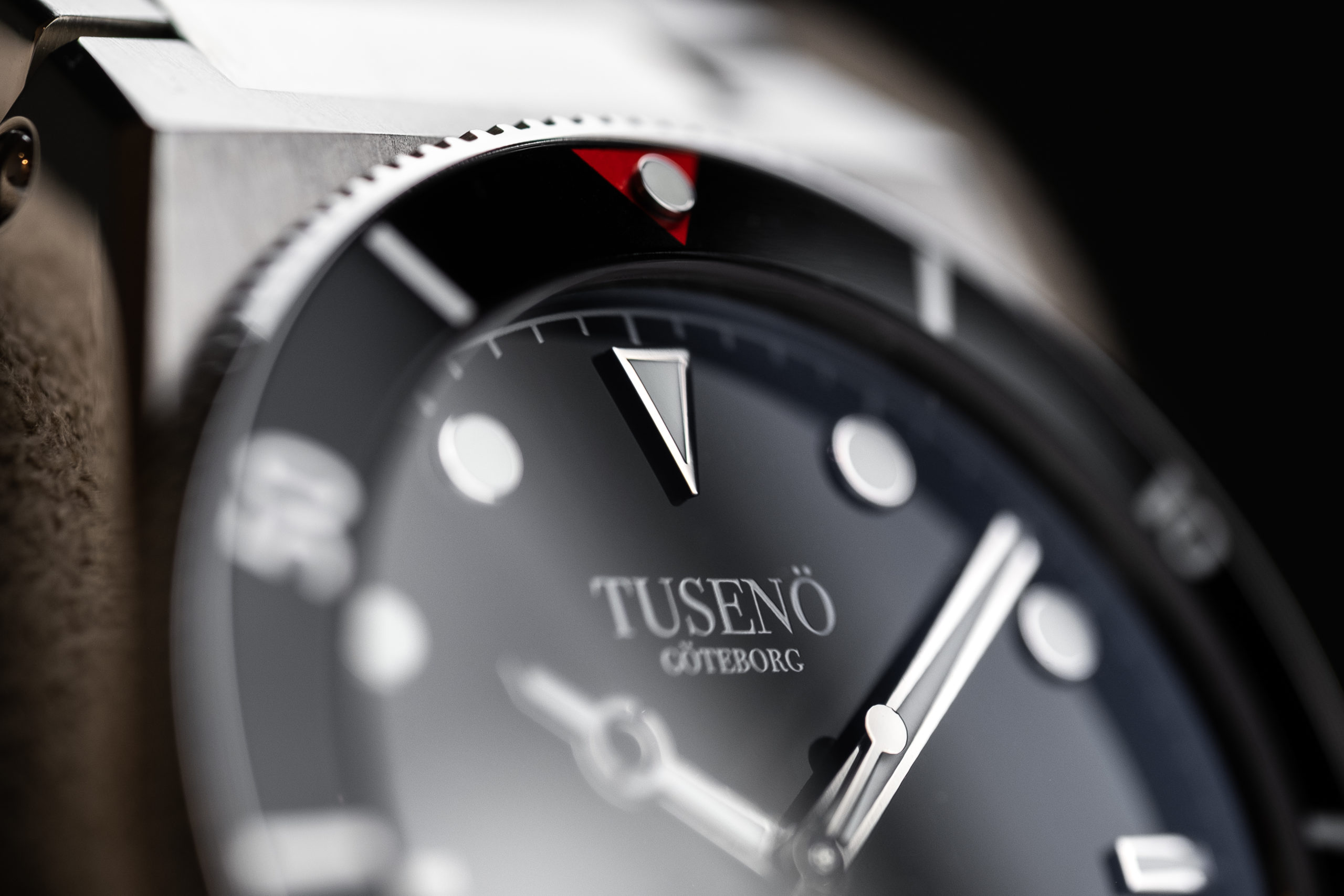 Tusenö, whose name is derived from the Swedish translation of “the coast with the thousand islands,” originated as a simple notion between two friends. Armed with optimism, enthusiasm, and the desire to create a cost-effective watch of the utmost quality in both design and execution, founders Alexander and Johan set out to make their shared dream a reality. Quickly gaining momentum, Tusenö’s flagship model became the most crowdfunded watch in Sweden’s history. This early victory laid the foundation for what has become a watch enthusiast’s watch brand. 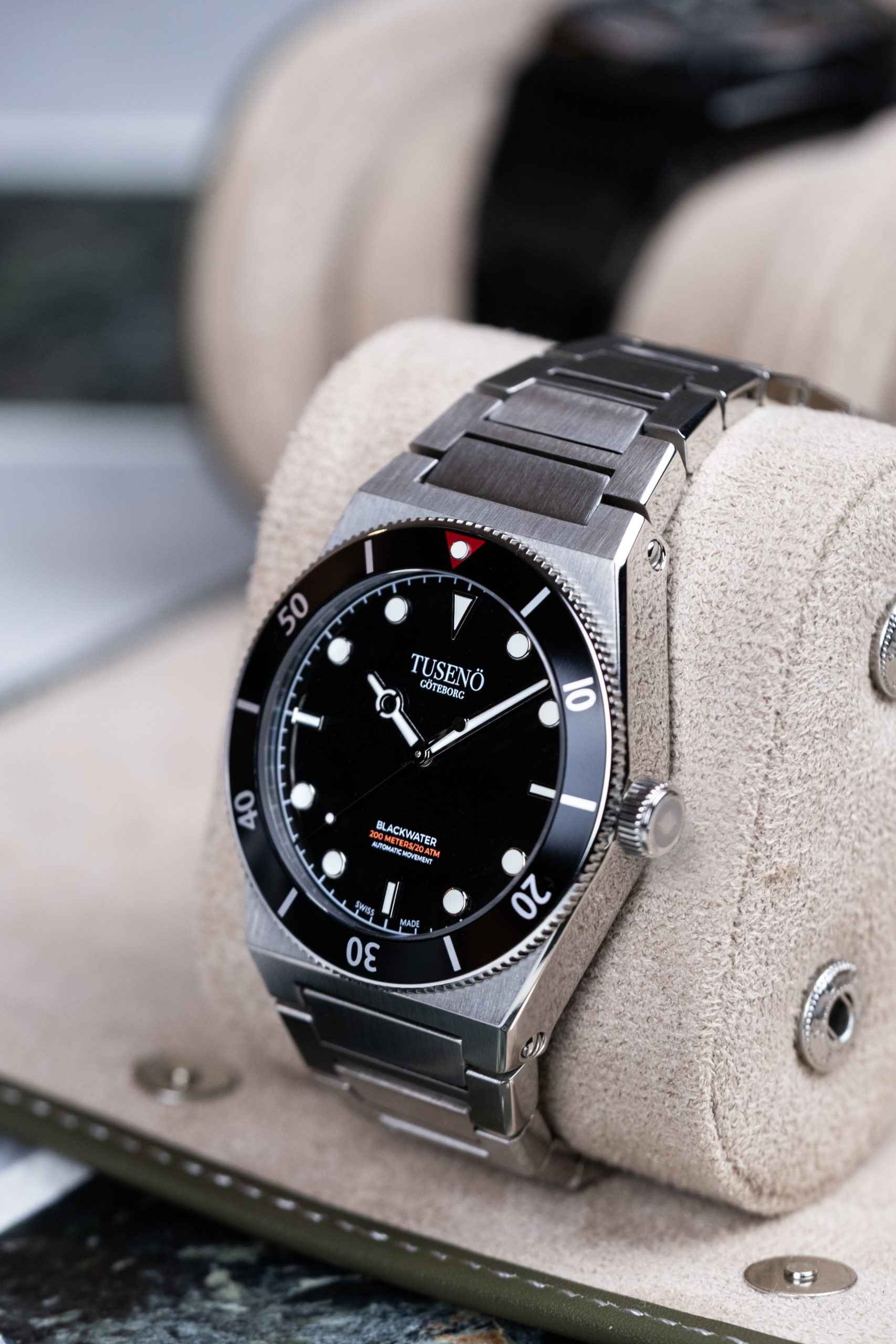 In 2018, after the unparalleled success of their first two models, Tusenö entered the dive watch market with a venture called “Project Blackwater.” Seeing as sustainability and social responsibility are paramount to the ethos of the enterprise, Tusenö set out to honor the Swedish West Coast while giving back to their community. Project Blackwater consisted of 300 limited edition dive watches, from each of which a portion of the sale benefitted the Swedish Sea Rescue Society (SSRS). The SSRS is a non-profit organization that receives zero government funding, with a legacy dating back to the early 1900s. Each of these pieces was individually numbered and featured the SSRS logo above the 6 o’clock text, serving as a constant reminder of the gallantry and heroism of each volunteer who patrols the Swedish Seas. Project Blackwater was a tremendous triumph, selling out and ultimately raising enough funds to operate a rescue station for an entire year. 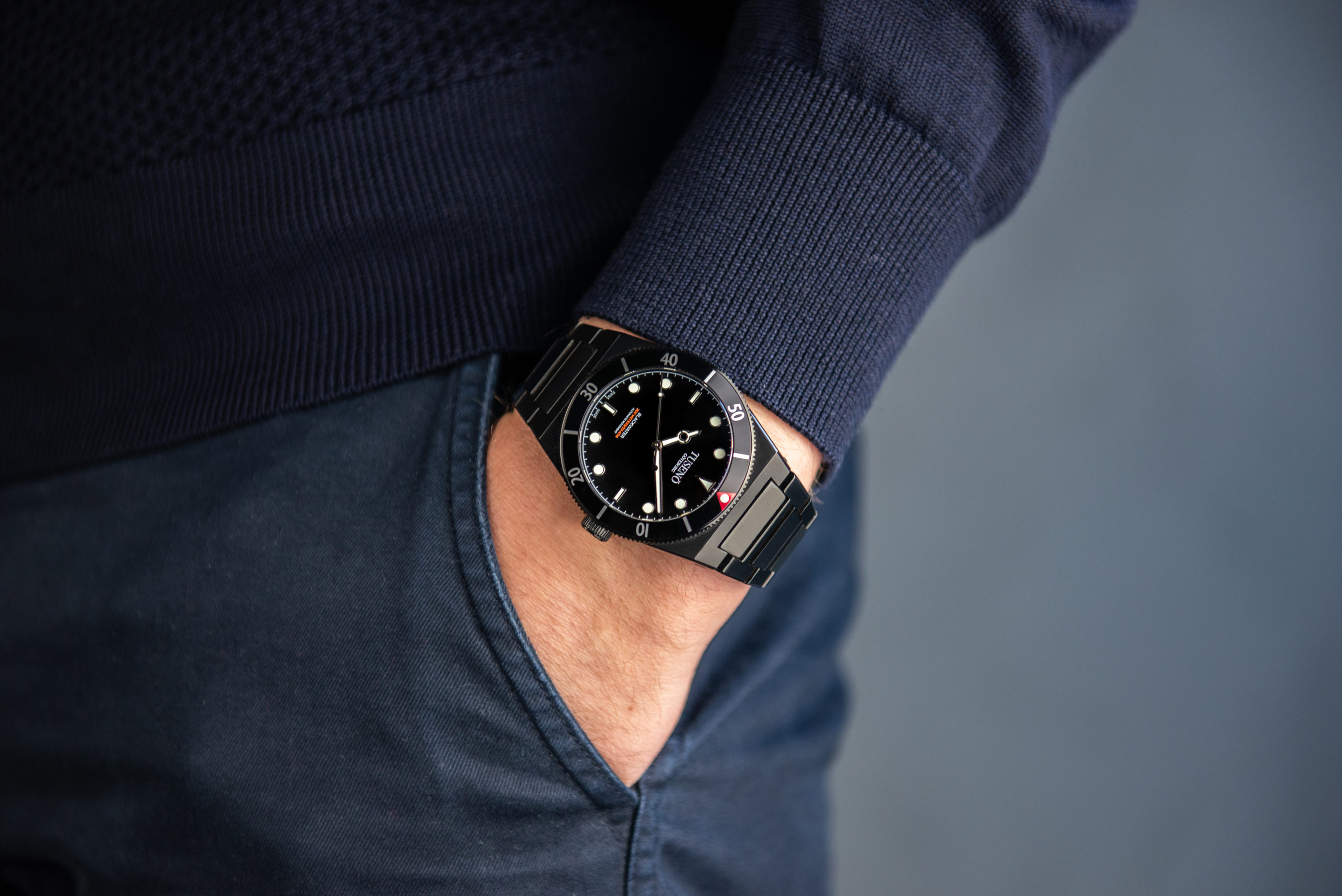 Given the exclusivity and inevitable scarcity of the limited edition SSRS release, Tusenö gauged the interest of the horological community and introduced two brand new iterations of the Blackwater, both available immediately. Now slightly updated, and sans SSRS logo, the Blackwater exists in both black DLC and full stainless steel versions.  This Swedish-designed, Swiss-made sports watch features a 40.5 mm case with a 50mm lug to lug measurement and integrated bracelet. While some design elements (such as the red triangle around the lume pip or the splash of red text at 6 o’clock) pull from vintage inspiration, this 200m rated diver is thoroughly modern. Running on the Sellita SW200-1 powerhouse, the Blackwater possesses a reliable 38 power reserve. This hacking movement allows for precision timekeeping while running at 28,800 beats per hour. Capable of tackling undersea depths of up to 200m, the Blackwater is certainly no slouch in the utility department. 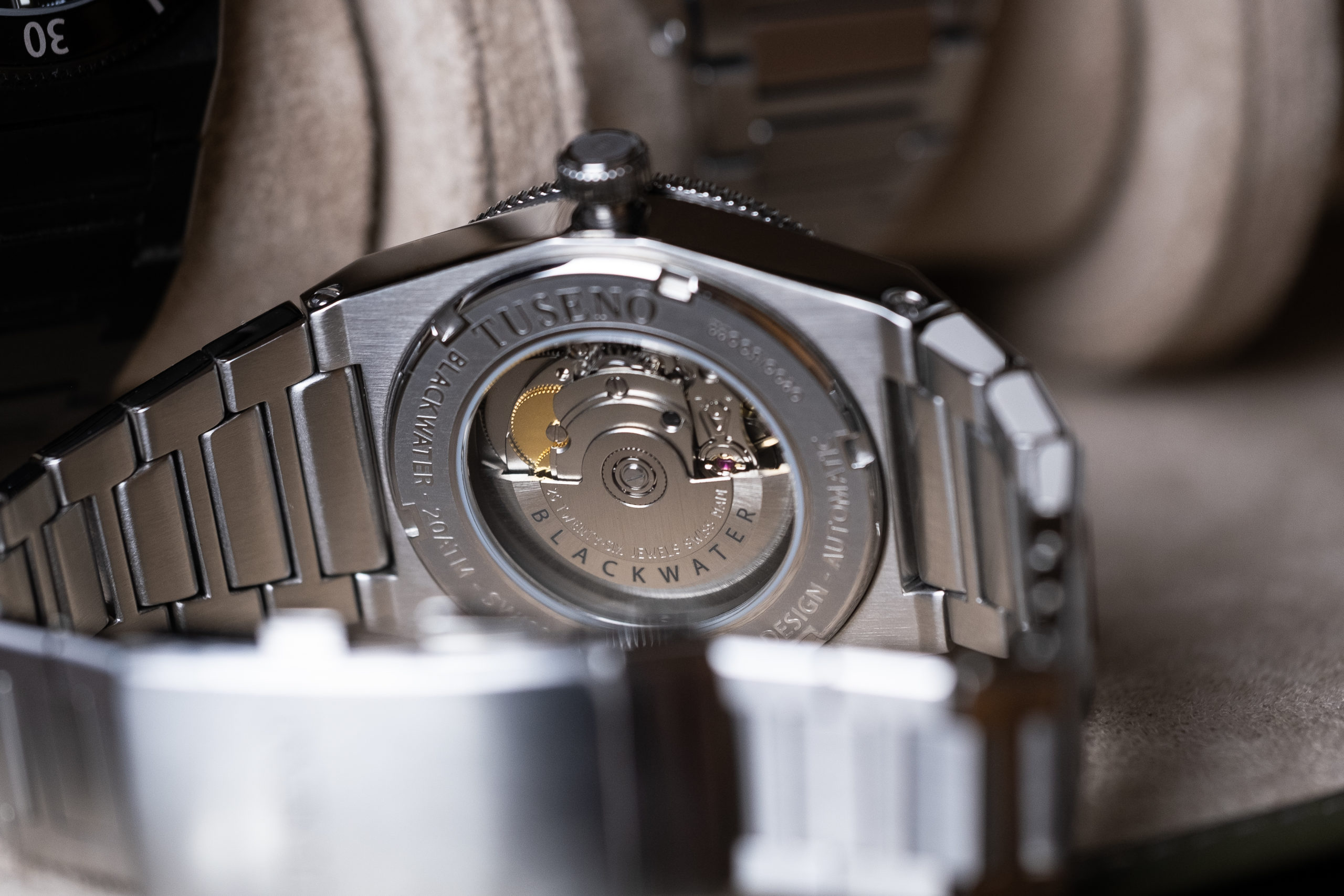 The dial of the Blackwater features a timeless design, while the hands are uniquely Tusenö. The stunted hour hand features an oddly charming hollow circle partway through the structure, while the lengthy hour hand stretches just shy of the outer minute track. Both the hands and applied indices are generously lumed with BGW9 Super LumiNova. This choice makes for a spectacle to behold once the sun has set; like cerulean fireflies radiating beneath the domed sapphire glass. The caseback features a porthole of sorts for those interested in observing the heart of the machine. 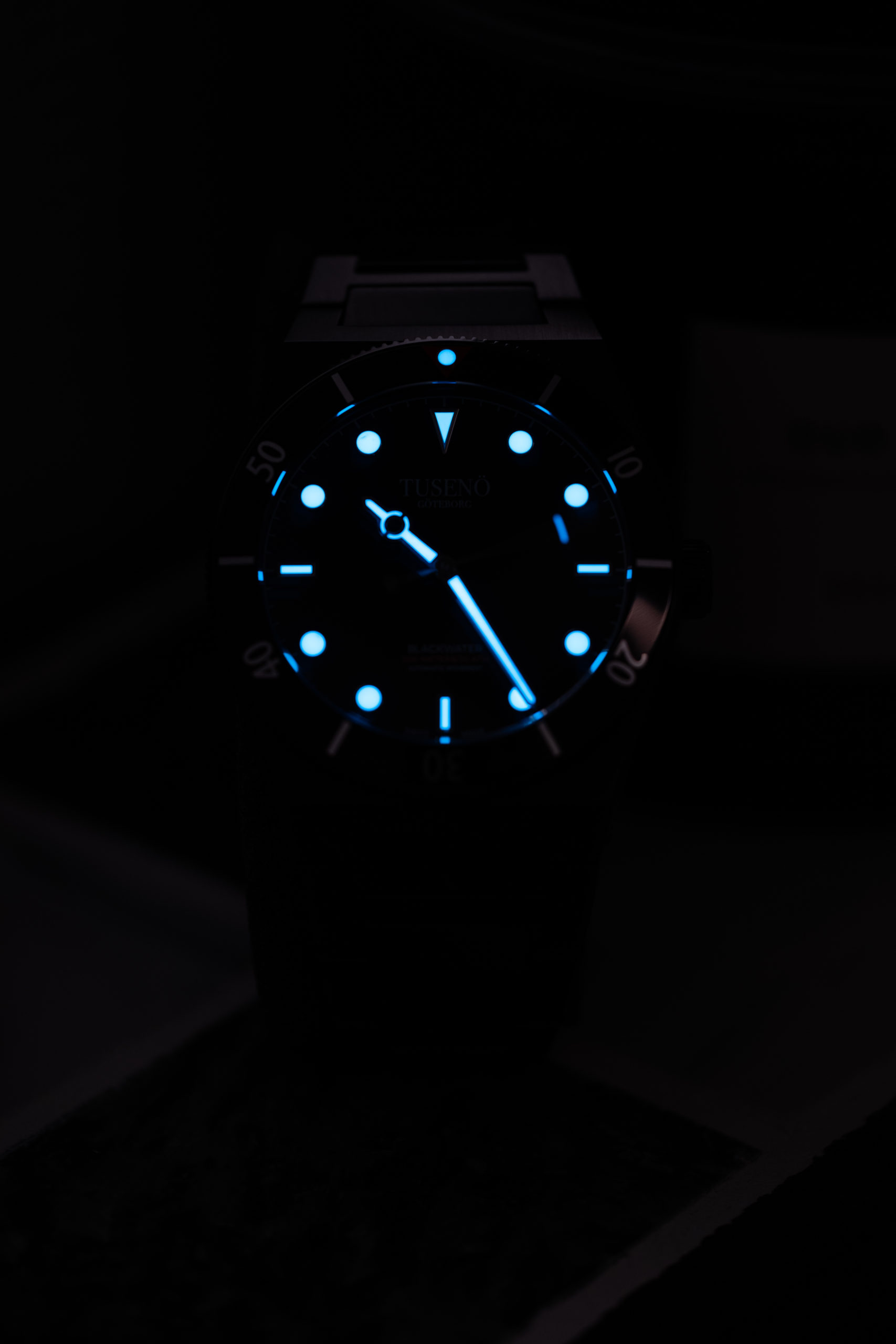 The standout feature of the Blackwater is the integrated bracelet. Though it does limit strap compatibility, the width near the case and steep taper towards the buckle creates a sense of fluidity that is virtually unrivaled. In addition to the design element, the flat h-link structure of the band provides a compelling wrist presence while masking the (sometimes) daunting 50mm lug to lug measurement. The stainless steel model features a polished bracelet and to match the sides of the case for a somewhat brazen elegance. The full black DLC model, on the other hand, is far stealthier. The Diamond-Like Carbon coating handily protects the watch from scratches and abrasions, making it the more stalwart sibling. 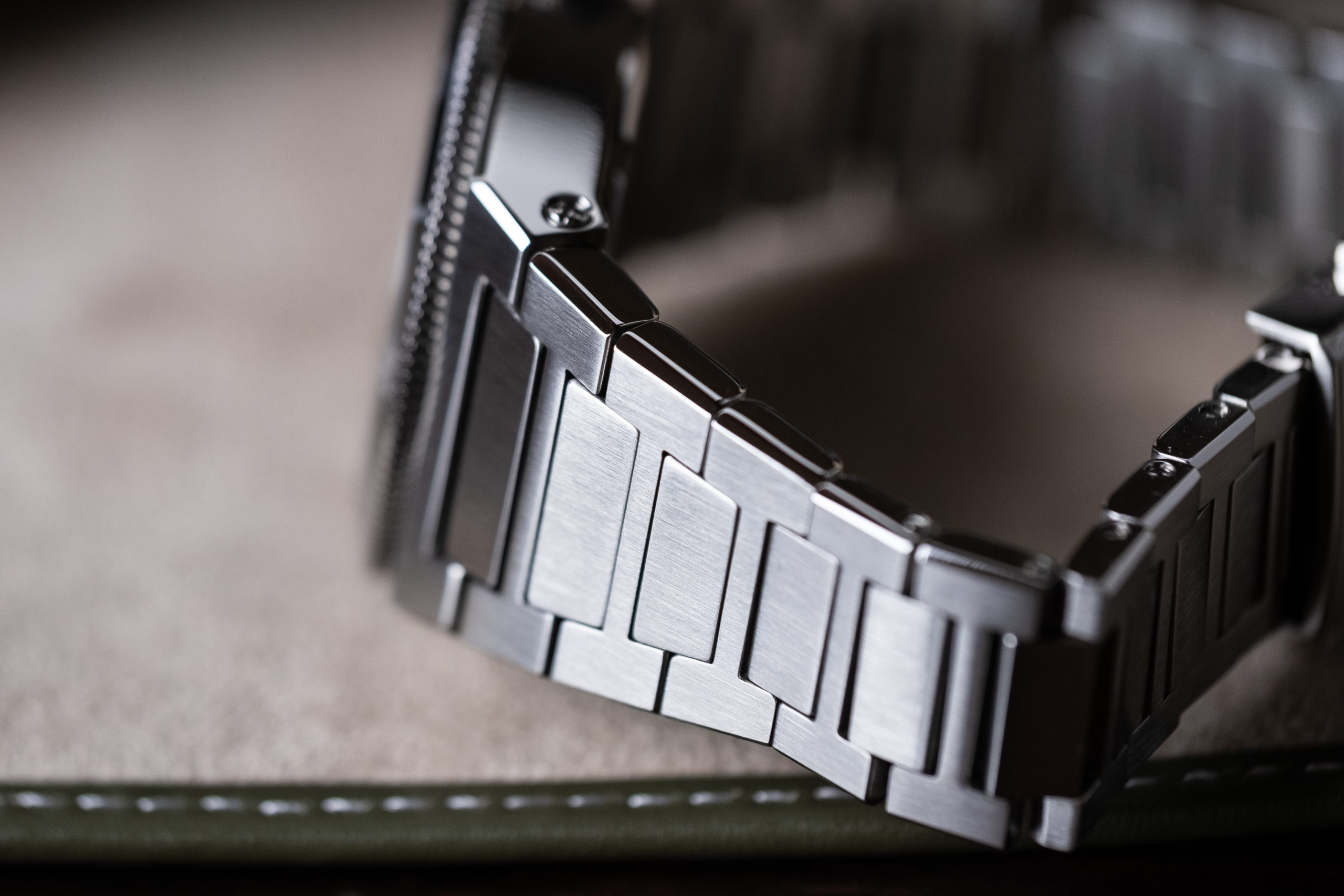 The Blackwater comes in at a surprisingly frugal price of $999 USD for the stainless version, or $1,049 for DLC. This price-point position is as alluring for those who are avid watch collectors as it is for the individual interested in acquiring one watch that can “do it all.” The versatile design and durability of the Blackwater make it a truly ideal “go anywhere, do anything” piece that looks just as fitting paired with boardshorts as it does with formalwear. In a market where microbrands seem to multiply like the heads of a hydra, Tusenö wields a keen blade of value and brings the heat with precision design.  For more information on the Tusenö Blackwater, check out the brand’s website here.