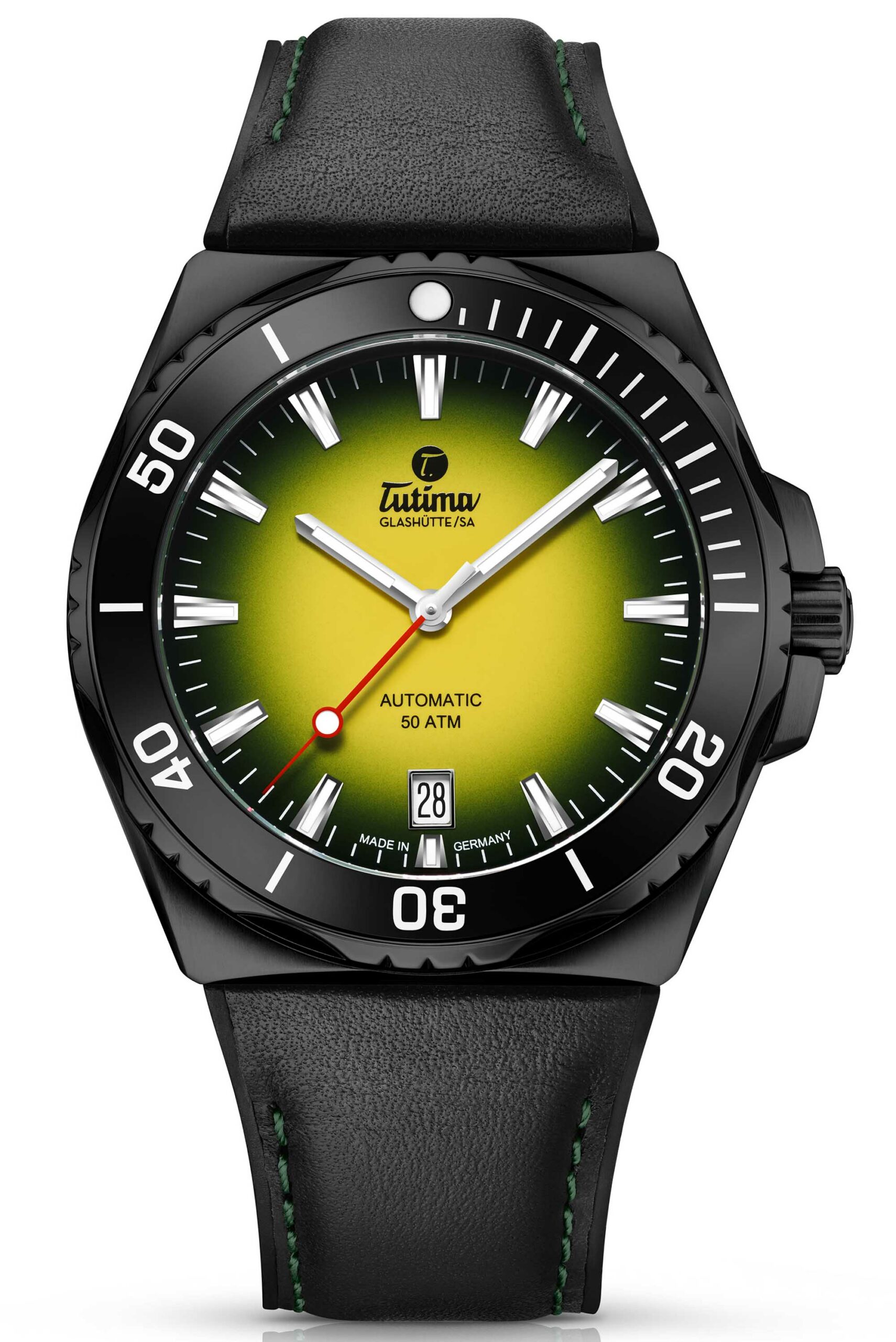 The Tutima M2 collection is the brand’s lineup of robust sports watches based upon the function-forward case design of a chronograph that the company produced for the German air force back in 1984. While the original model was a pilot’s chronograph, the M2 has since expanded into an entire lineup of adventurer’s watches that spans a variety of different styles and configurations. The latest release from the Glashütte-based watchmaker is the Tutima M2 Seven Seas S PVD, which expands upon the dive watch side of the collection with a smaller 40mm case that features a black PVD finish. 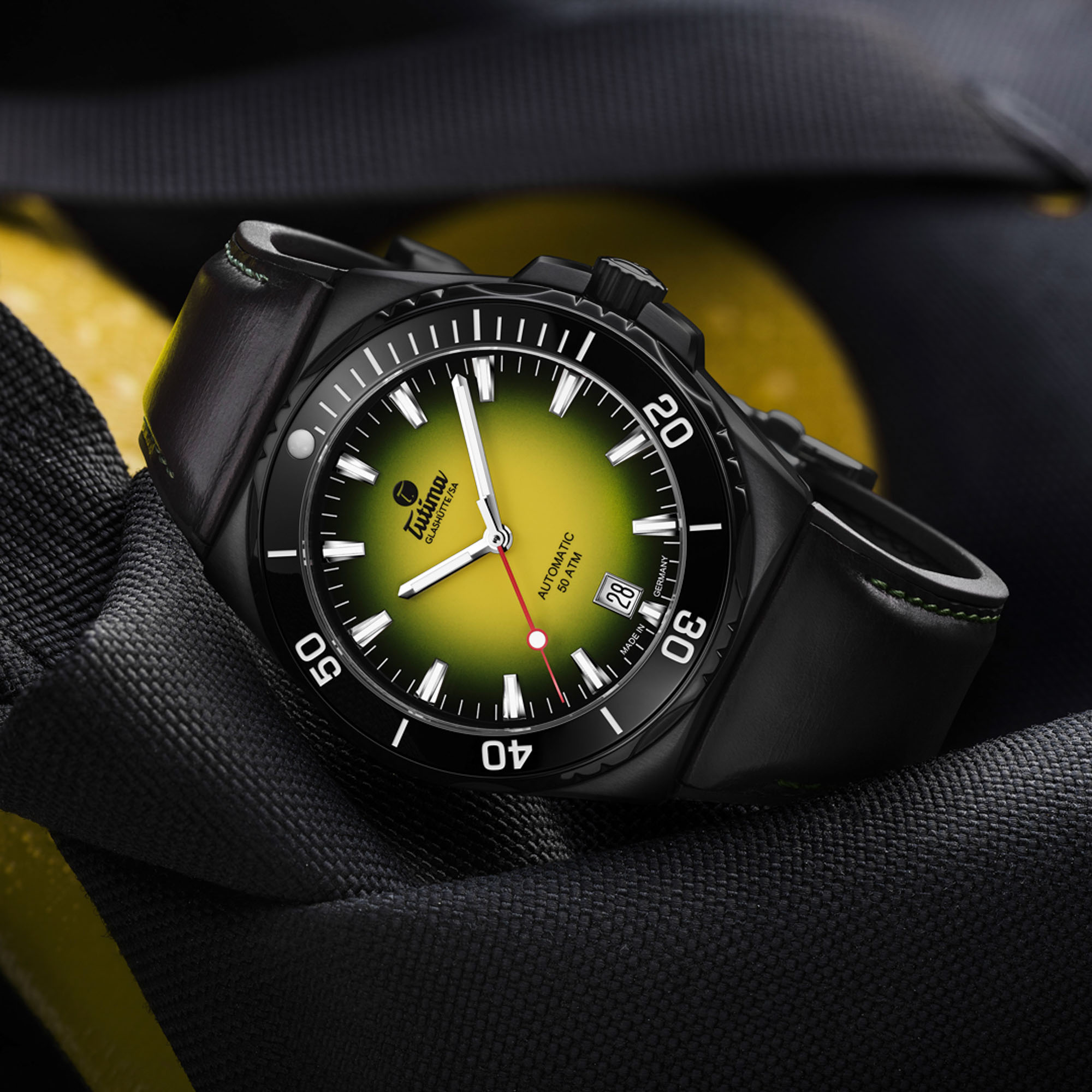 Measuring both smaller and thinner than the full-size M2 Seven Seas dive watches, the 40mm case of the new model measures 12.5mm-thick and represents the first time that a watch from the M2 Seven Seas S series has featured a black PVD finish. Additionally, Tutima states that the matte black PVD used is harder than even the steel it covers to further prevent wear and scratches. The case itself follows very much of the same overall shape as the other M2 Seven Seas watches and features an integrated lug design with blocky crown guards flanking the signed screw-down winding crown at 3 o’clock. Fitted to the top of the case is a unidirectional rotating timing bezel with a black ceramic insert, which also includes a scalloped and ridged edge for added grip. Covering the dial is a 2.5mm thick sapphire crystal, while a solid stainless steel screw-down caseback helps provide the Tutima M2 Seven Seas S PVD with the same whopping 500 meters of water resistance as its larger 44mm siblings. 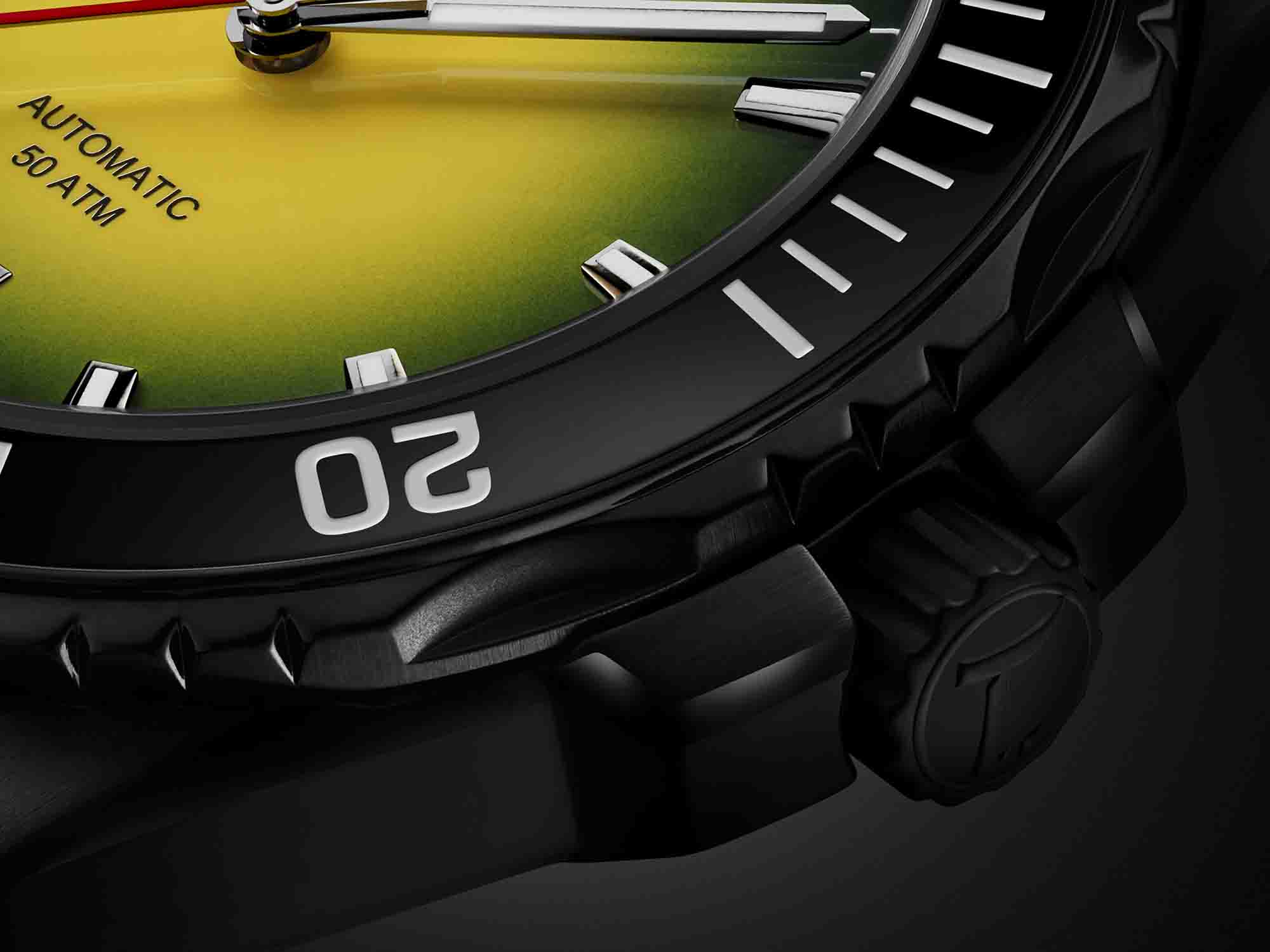 The dial of the new 40mm Tutima M2 Seven Seas S PVD features a vibrant yellow dégradé finish that subtly darkens towards the outer edges. Furnished with applied faceted markers that are filled with Super-LumiNova and featuring a date window at the 6 o’clock location, the dial itself is almost identical to the yellow dial found inside the 44mm version of the Seven Seas S, although it features slightly different indexes and redesigned proportions due to physically being a smaller size. Additionally, just like the larger version that is fitted with a yellow dial, the 40mm M2 Seven Seas S PVD is fitted with a pair of polished baton-style hands and a bright red seconds hand, and all three of them are finished with Super-LumiNova to aid with low-light visibility. 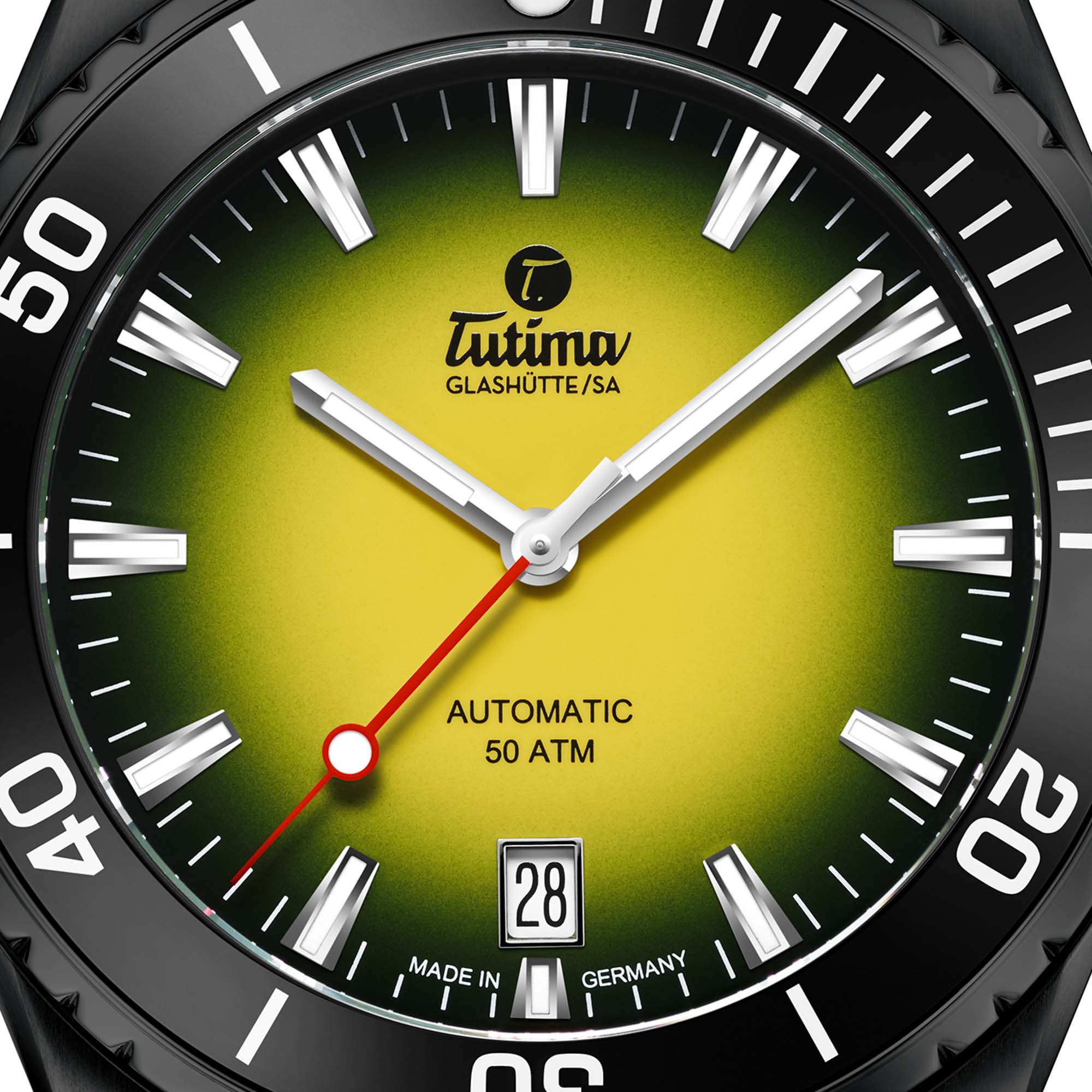 Powering the Tutima M2 Seven Seas S PVD is the brand’s Caliber 330 movement. Somewhat interestingly, Tutima chooses to use the same Cal. 330 designation for both date and day-date versions, but in regards to the M2 Seven Seas S PVD, it is essentially Tutima’s version of the ETA 2824 or Sellita SW200 that is finished to the brand’s specifications and fitted with a custom oscillating weight. Running at a frequency of 28,800vph and offering users a 38-hour power reserve, a movement like this is about as much of a known quantity and a proven design as you will find within the Swiss watch industry. Although it won’t exactly give you bragging rights among movement snobs, Tutima’s Cal. 330 is entirely appropriate for a rugged tool watch, especially one from the M2 Seven Seas range that conceals its internals behind a solid caseback anyway. 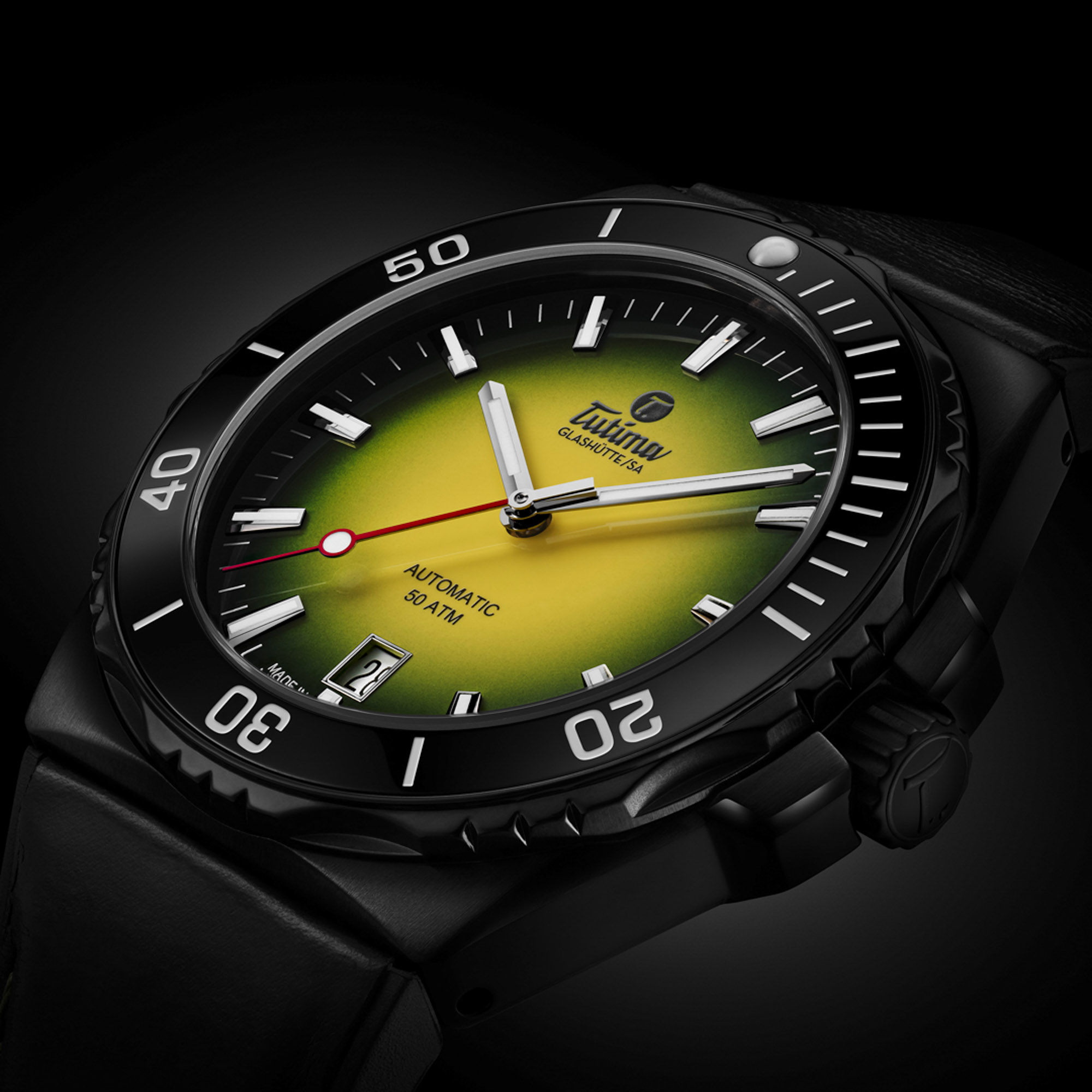 Connected to the integrated lugs is a black hybrid material strap, which features a rubber underside paired with a padded leather upper surface. Accenting the edges of the strap and running the length of its taper is subtle green contrast stitching while connecting the two ends and attaching it to your wrist is a folding deployant-style clasp with a black PVD finish to match the rest of the case. In addition to featuring a double push-button release, the clasp is designed in such a way that it can be quickly and easily adjusted to size without having to thread or fold the end of the strap through the structure of the clasp and running the risk of damaging it. 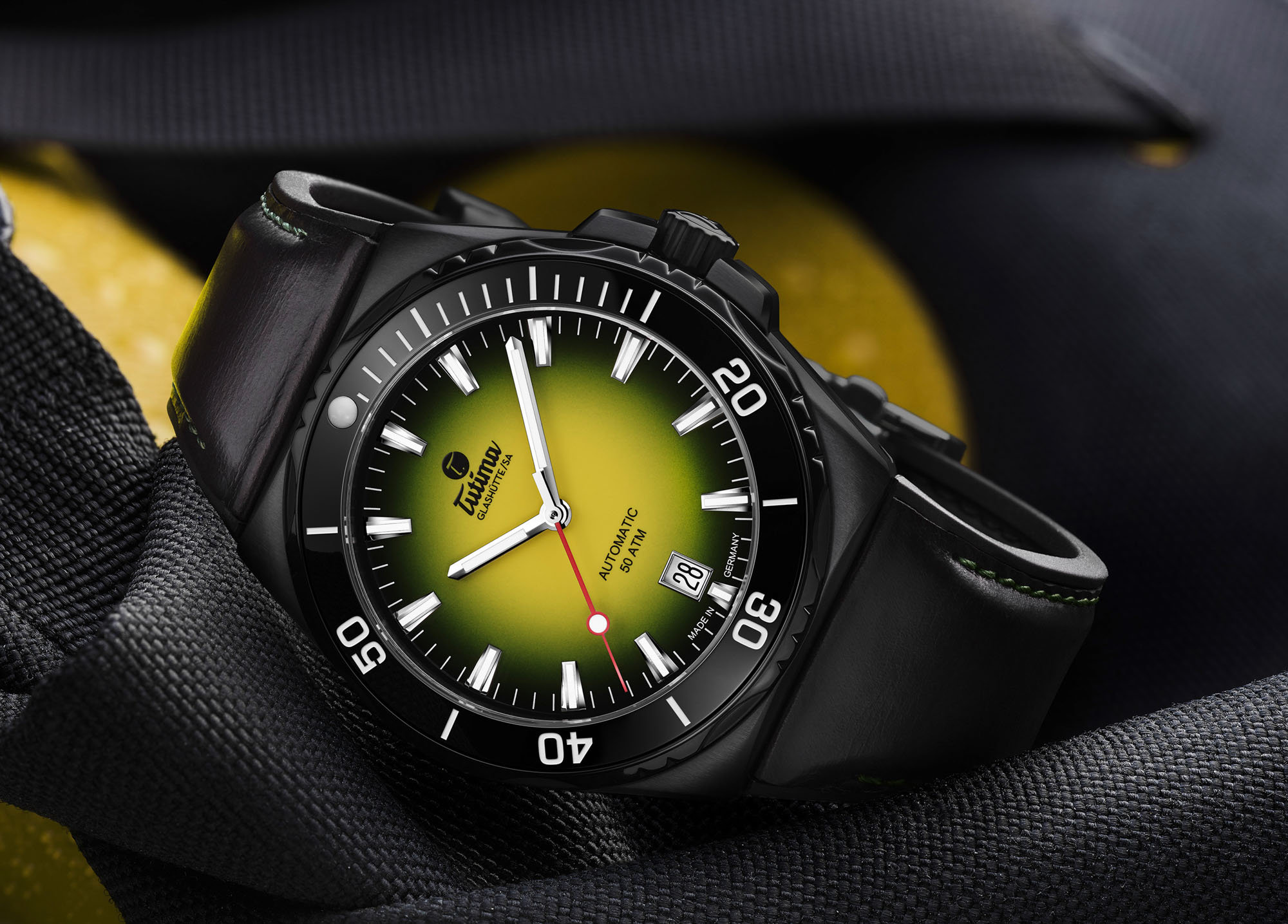 While the integrated lug structure allows the various models from the Tutima M2 Seven Seas to be far more manageable on the wrist than their case diameters alone might indicate, there are still some who feel that they are too large in their standard 44mm configuration. The smaller and thinner cases of the 40mm models represent a significant reduction in size compared to their larger siblings, and the new Tutima M2 Seven Seas S PVD will likely wear even smaller due to its black PVD finish. At the present time, the new 40mm size with a black PVD finish is only available in this one configuration with a yellow dial, although it seems inevitable that Tutima will eventually add additional dial colors at some point down the road. The new M2 Seven Seas S PVD has an official retail price of $1,980 USD and it will be available from authorized Tutima retailers around the globe. For more information, please visit the manufacturer’s website.