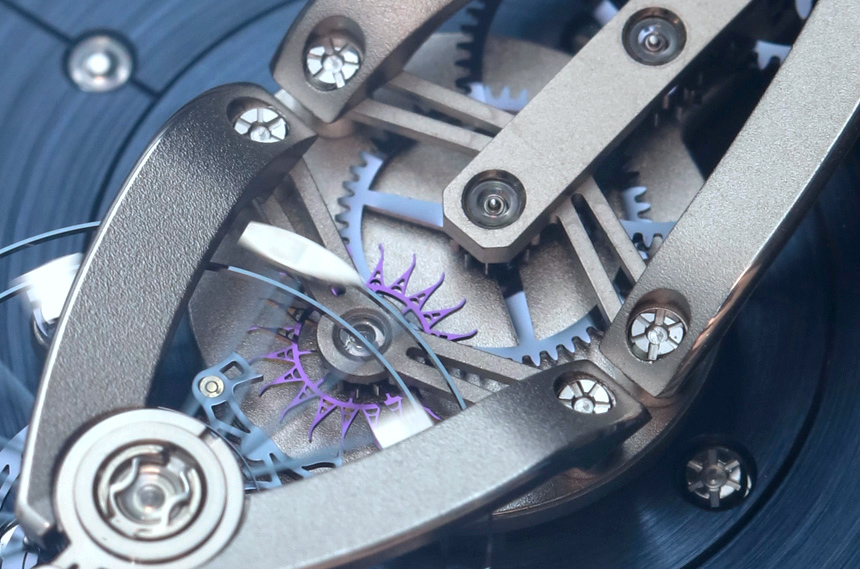 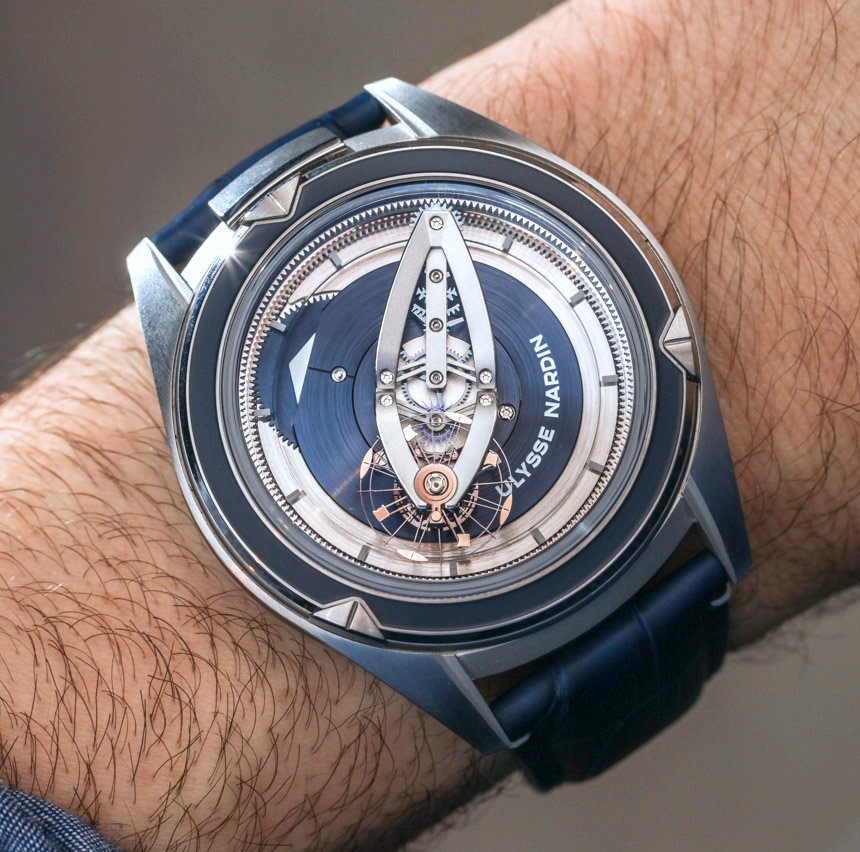 At SIHH 2018 Ulysse Nardin debuted a totally redesigned member of the ongoing Freak collection, known simply as the reference 2505-250 Ulysse Nardin Freak Vision. While the Freak Vision is thoroughly part of the Freak watch family, it looks and feels like something totally fresh and distinct. The Freak Vision arrives just one year after Ulysse Nardin debuted an exciting concept watch known as the Freak InnoVision 2 (aBlogtoWatch article and video here). The InnoVision 2 presented a case and movement with numerous innovations in both technique and materials. If I had to summarize the purpose of the InnoVision 2, it would be “how to make a mechanical watch perform even better by using parts that are not metal and produced using novel techniques with modern engineering principles.” 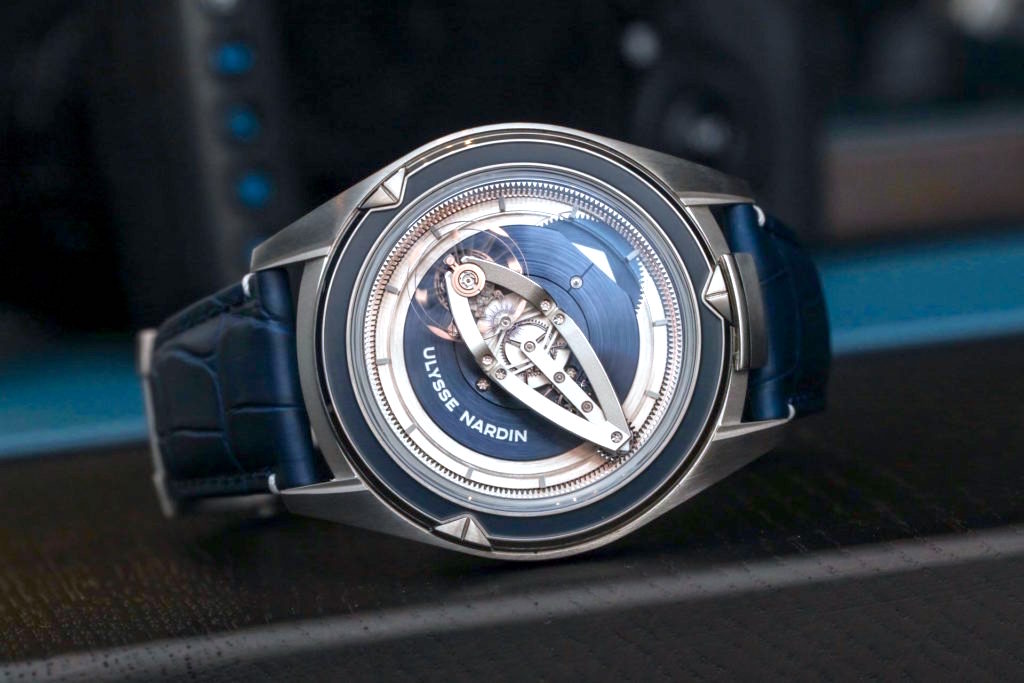 All images by Ariel Adams. 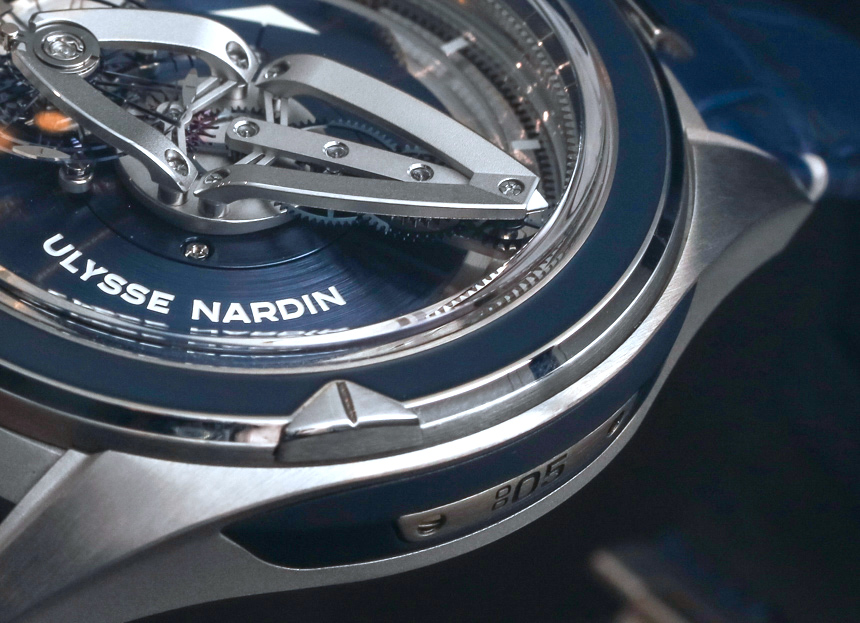 [Editor’s Note: Ariel Adams here, and I want to simply say that I accidentally wore the Freak Vision timepiece upside down while shooting it during the hectic trade show environment at SIHH 2018. The Freak has always been one of the easiest watches to mistakenly wear upside down – so please have that in mind when seeing the watch on my wrist. Thank you.] The 2018 Ulysse Nardin Freak Vision contains some of the innovations from the InnoVision 2, even though some of the more exotic innovations (such as glass parts) could easily require a few more years to get right. If I had to guess, I would say that while the innovations in the InnoVision 2 lead to greater mechanical performance in a controlled setting, during real world use there are likely some reliability and durability concerns which still need to be sorted out. With that said, one of the most impressive innovations of the InnoVision 2 watch has made it into the Freak Vision – and that is the “Grinder.”
Advertising Message 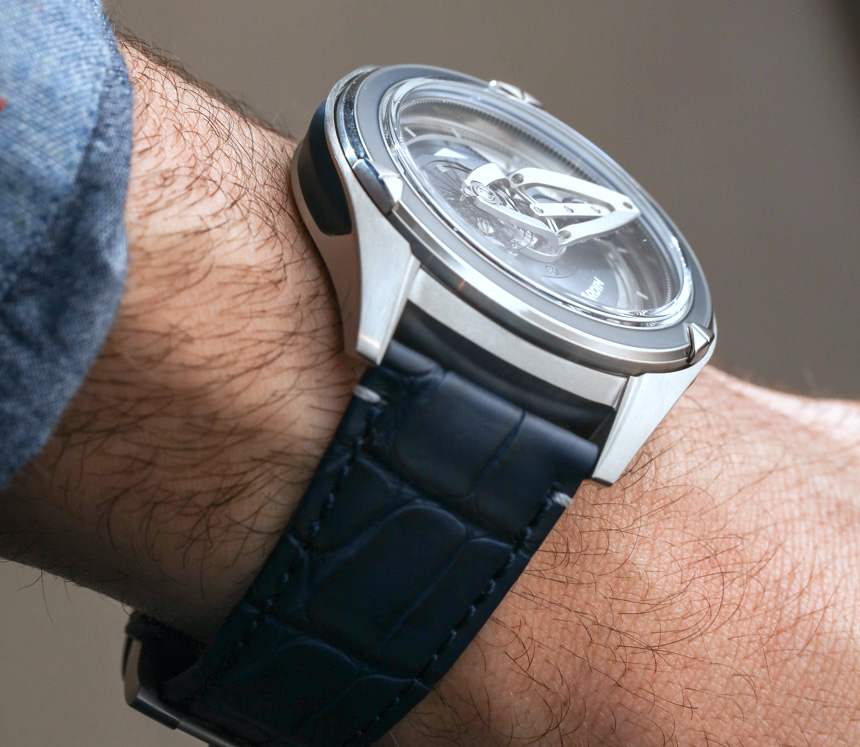 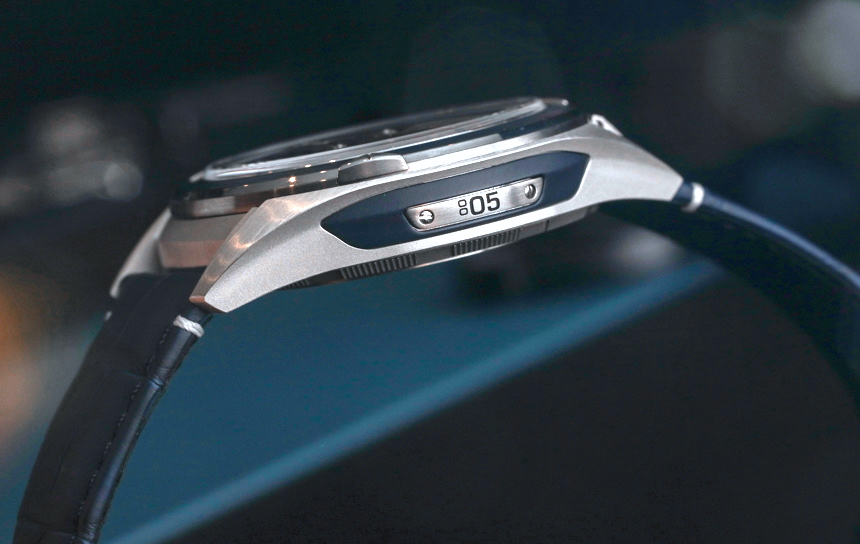 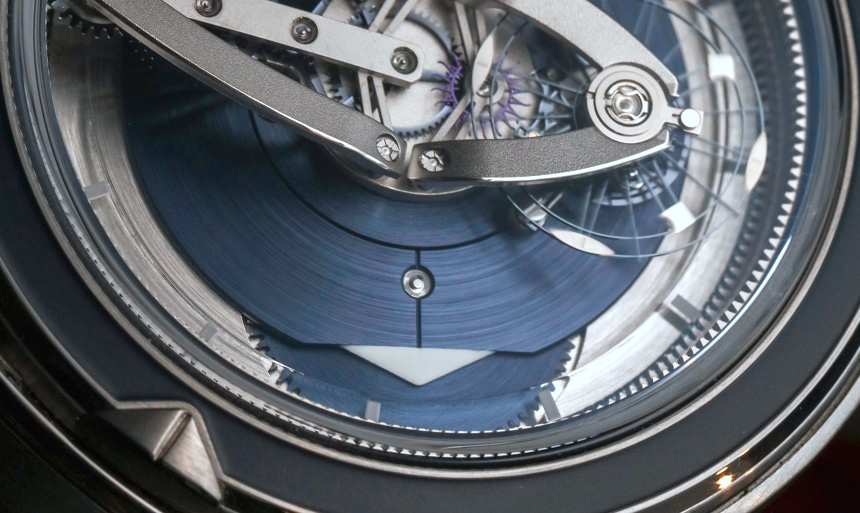 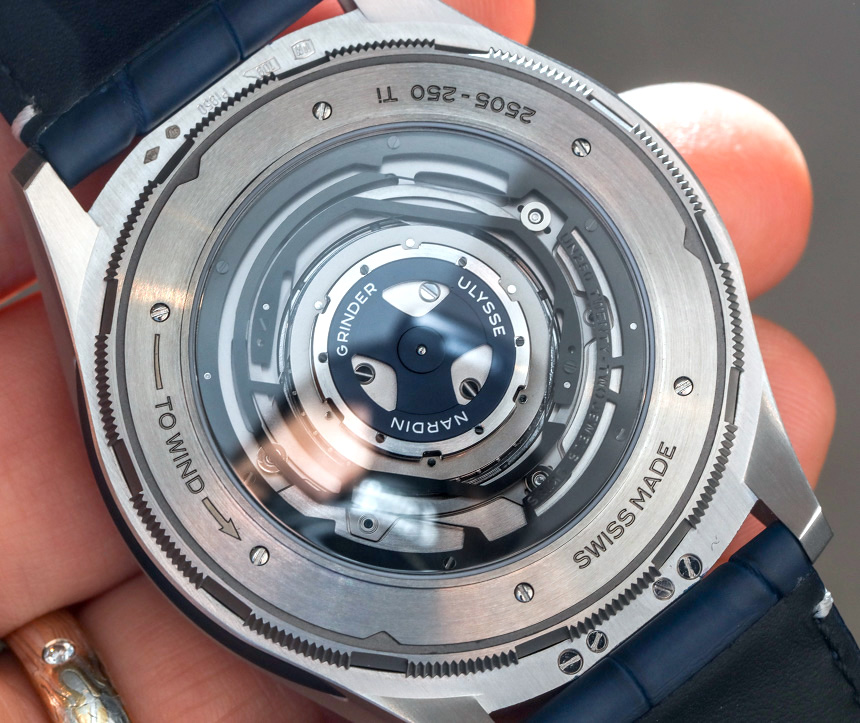 Equipped with the Grinder (visible through the back of the watch), the Freak Vision is the first automatic winding version of the Freak ever produced. This is a big deal because even though previous versions of the Freak have a power reserve of up to a week, winding them was not always pleasant on the fingers. That is because the Freak cases are designed to be both water-resistant (to 30m in most instances such as here) and have top and rear bezels that rotate. The top bezel on the front of the watch (released with a small tab located at 12 o’clock) is used to set the time, while the rear bezel is used to wind the watch. With the Grinder, the need to manually wind the Freak Vision movement becomes optional as opposed to necessary. 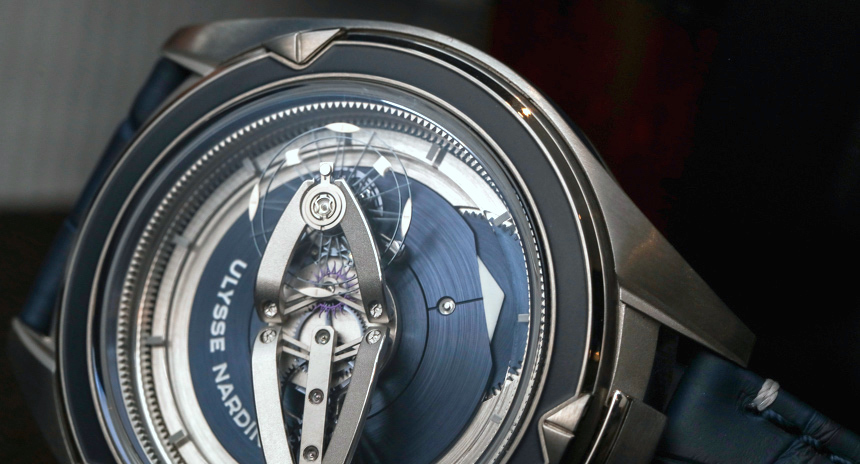 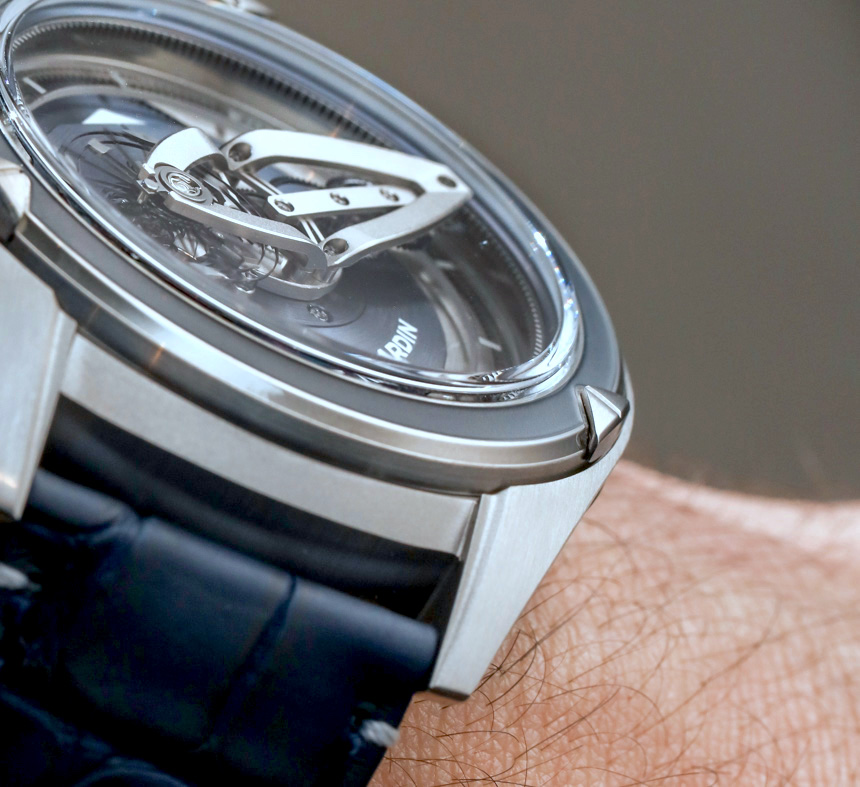 Freak fans will immediately notice that aesthetically, the Freak Vision is a very different beast compared to previous Freak models. The watch is actually easier to wear and thinner than previous models, but still existing in a bold 45mm wide case. I think you’ll agree that even at 45mm wide, the crown-less design of the case still wears very well on my smaller-sized wrists. The case is in two materials including a precisely machined grade 5 titanium bezel as well as a solid platinum middle case. It also has an excellent modern look to it. Overall I think that from a design and performance perspective, the Ulysse Nardin Freak Vision takes traditional haute horlogerie into the modern age without abandoning the past (music to the ears of most Swiss watchmakers). 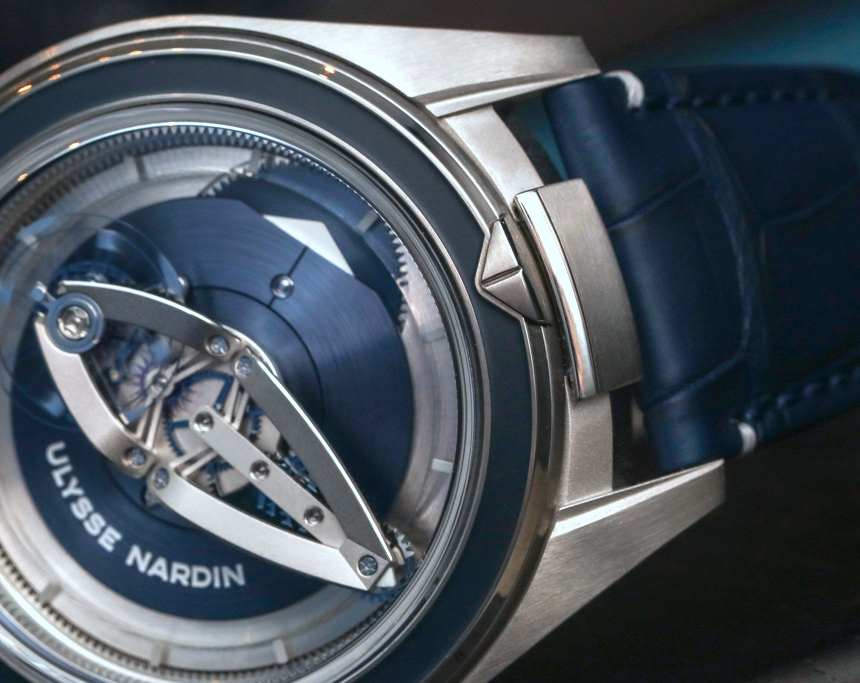 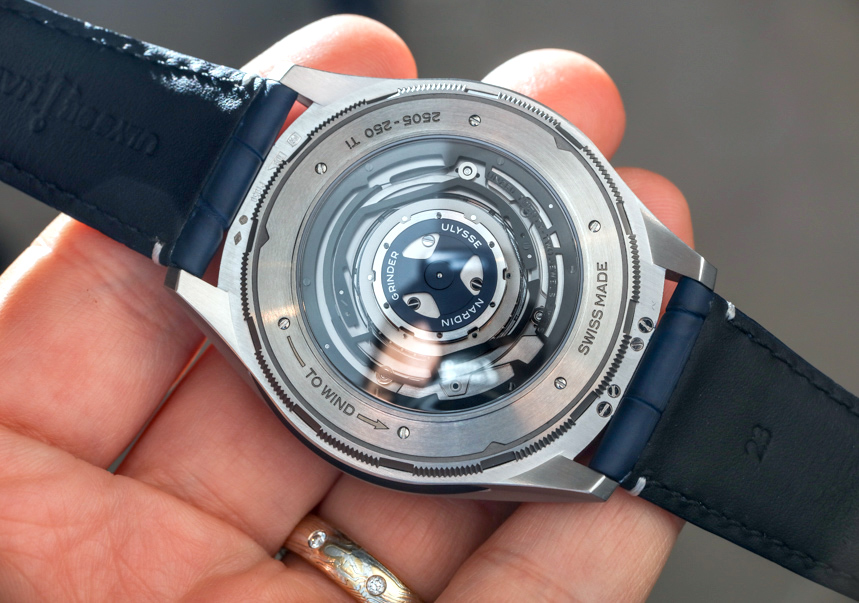 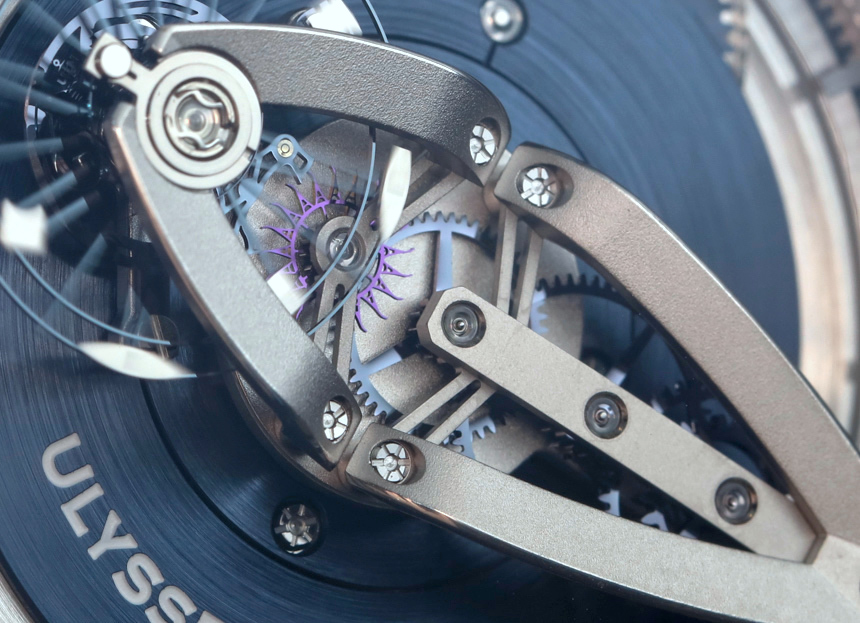 Like Freak watches before it, the Ulysse Nardin Freak Vision is “read” by looking at the rear disc hour hand (that has a white arrow indicator) along with the large minute hand structure which is actually comprised of the main gear train. For this new generation of Freak Vision watches, the minute hand assembly has a new look meant to evoke the shape of a boat hull. One of most impressive elements of this is viewing the in-house designed and produced “Ulysse Nardin Anchor Constant Escapement” which is a key part of the regulation system. This includes the wide-sized all-silicon oscillator (balance wheel) that uses melted pieces of nickel as “inertia-blocks” on the oscillator. This also includes a constant force system in the escapement, which is really about ensuring a stable flow of energy to the movement as the mainspring winds down. The result is constant amplitude, which allows the watch to offer the same level of accuracy throughout the period when the mainspring winds down.

The movement inside the Ulysse Nardin Freak Vision is the in-house caliber UN-250. Functions include just the time, with automatic winding, and a lot of fancy silicon parts. The oscillator operates at a frequency of 2.5Hz, and has a power reserve of 50 hours. Note that Ulysse Nardin considers the system to represent a tourbillon-esque “Flying Carrousel” since the regulation system makes a complete revolution around the dial each hour given that it is connected to the minute hand. I look forward to seeing how Ulysse Nardin not only advances the new systems in the UN-250 movement, but also adds further complications in the future. For many people this type of movement is just right, as it offers the time and the simplicity of enjoying the mechanism. 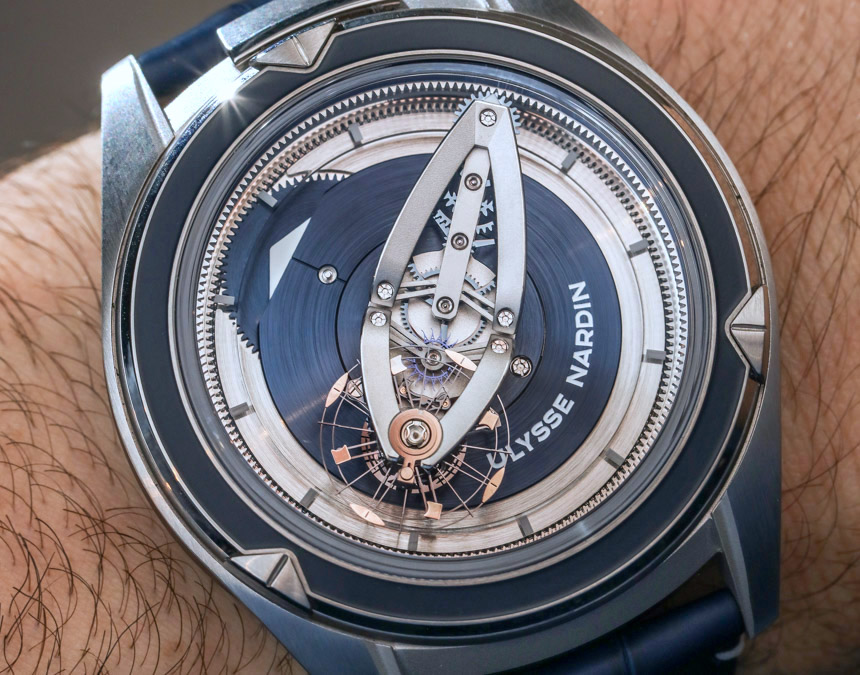