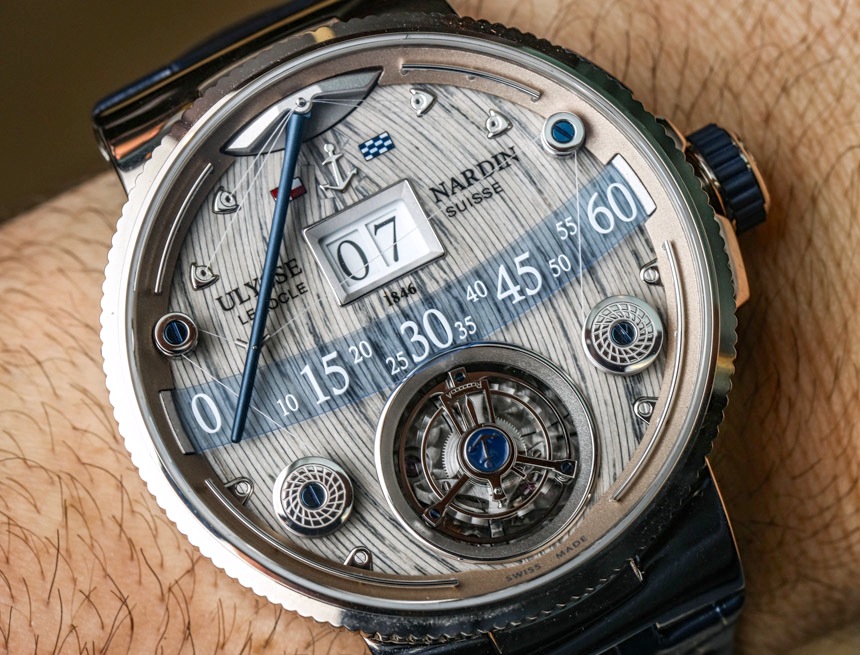 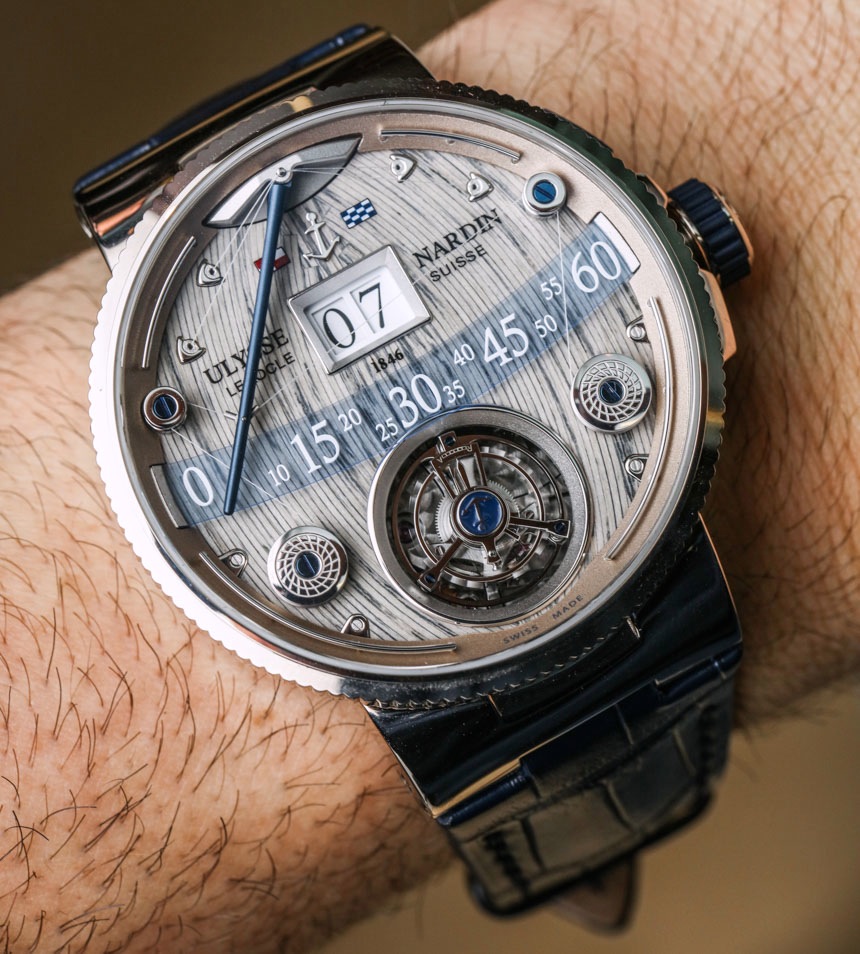 If watch brands stopped coming out with products like this, I would probably stop going to Baselworld. I might not ever be in a position where I have a spare 280 grand lying around to buy a Ulysse Nardin Grand Deck Marine Tourbillon, but I am sure as hell happy at least a few people out there do. Otherwise, I would be missing the smile that comes to my face when seeing the sail ship-inspired dial of this fascinating mechanical timepiece in action.

Times are tough for the watch industry, with economic instability and systemic issues of product over-production to blame. You’d think that major watch brands would buckle down on spending and merely focus on selling what already works. Nevertheless, there is still magic and the unexpected around many corners – such as this new wonder-watch from one of my favorite brands, Ulysse Nardin. Sitting with brand CEO Patrik Hoffmann, he asks me with a slight smile, “Did you see the Grand Deck?” 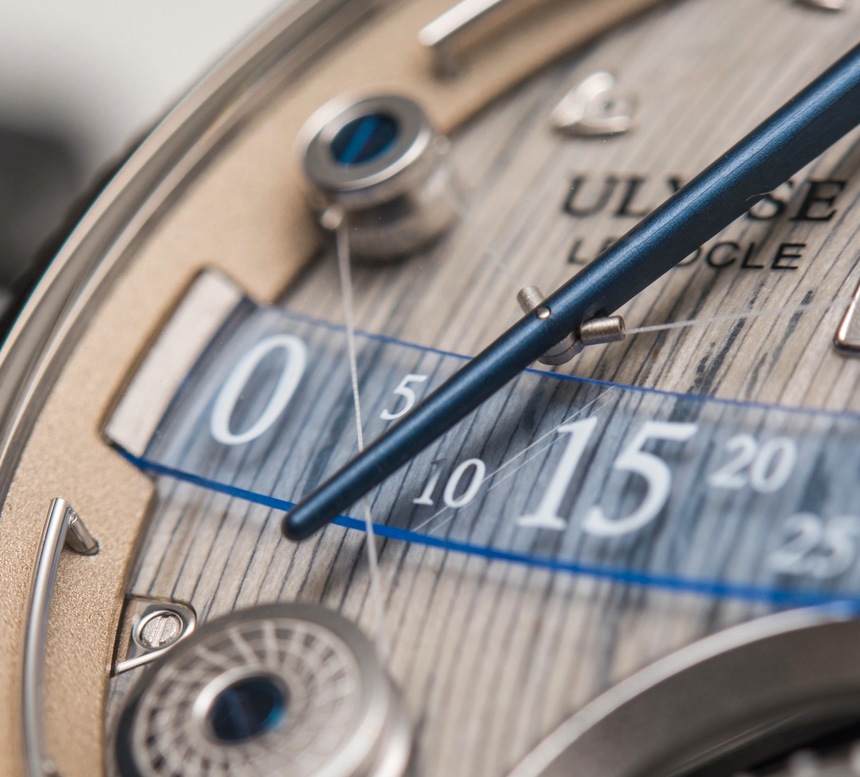 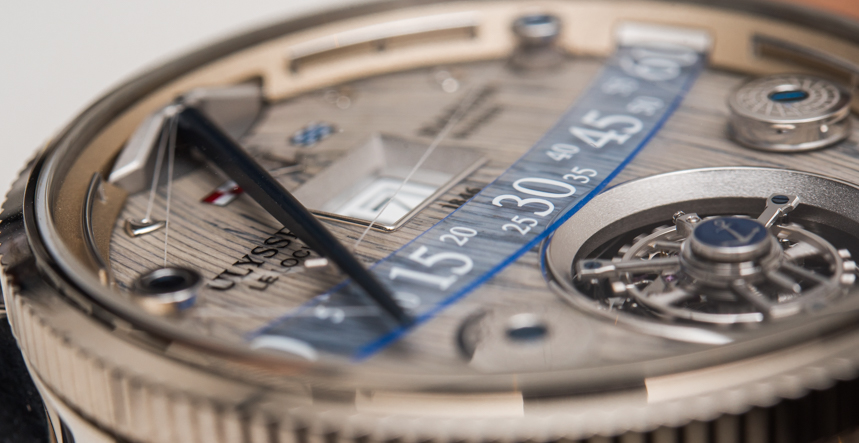 Ulysse Nardin has been inspired by the world of boating at least a few dozen times over the years, and new interpretations continue to manifest from that, such as this Ulysse Nardin Grand Deck Marine Tourbillon. This happens to be the first time Ulysse Nardin has introduced a new complication into the Marine case collection – here, rendered in a 44mm-wide 18k white gold case.

In the video above, you can see exactly how the watch works as a series of “nanowires” act to pull a blued-aluminum retrograde minute hand, which is meant to act like a ship’s boom. The small transparent wires are stronger than steel and made of a polyethylene known as Dyneema fiber – and, perhaps less than coincidentally, also used inside some ship rigging. 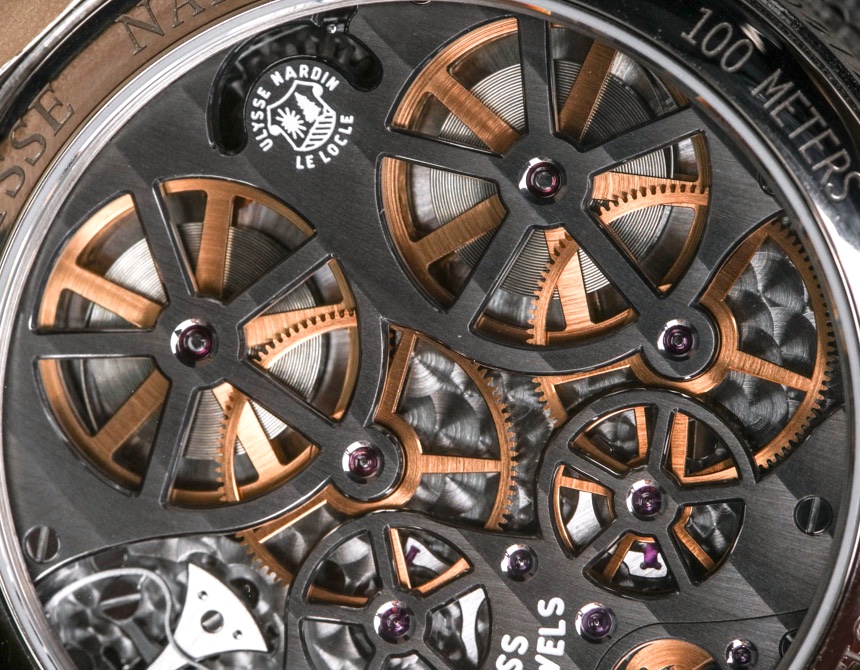 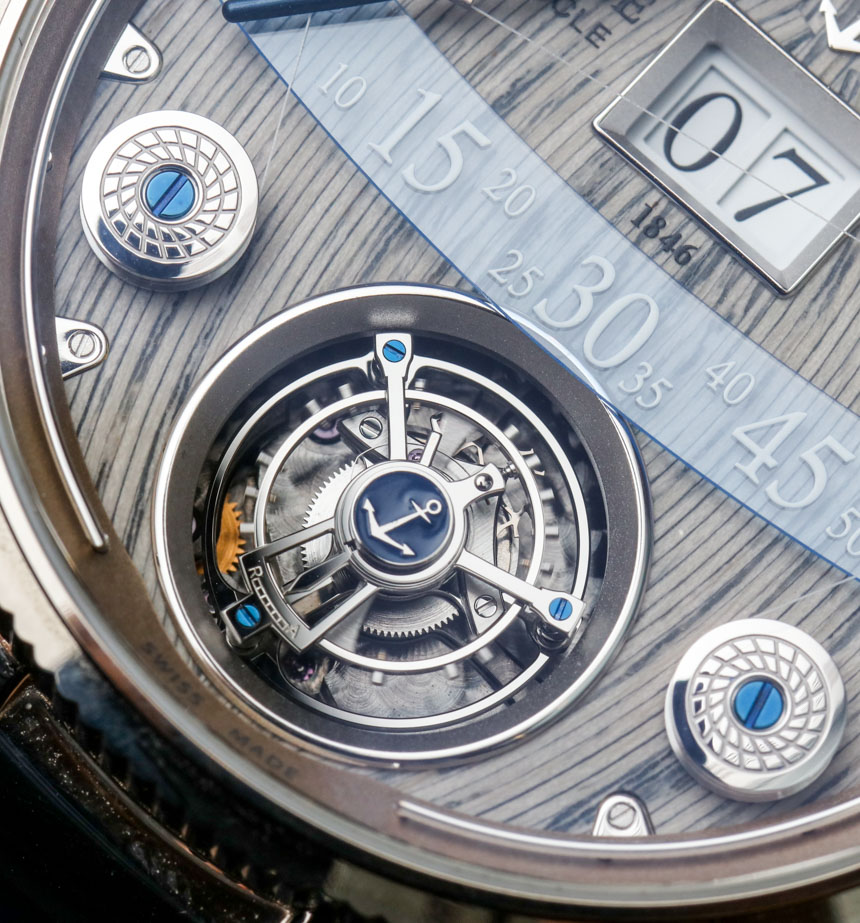 The boom-style retrograde minute hand moves along a translucent blue arc minute counter and offers the coolest animation when it hits 60 and returns to zero. In fact, the entire operation of adjusting the time is a pleasure. Hours are indicated via a double-disc “big” jumping hour display which is useful and lovely. Because setting the time using this system can be slow, Ulysse Nardin designed the in-house made caliber UN-630 movement with a quick-set system for the hour indicator. A pusher above the crown allows you to advance the current hour in one hour increments. This is good for traveling or simply setting the time with ease. I like that the movement was designed with novelty and (at least some) practicality in mind.

Don’t forget that, in addition to the jumping hour indicator and the retrograde minute hand, the UN-630 movement also has a 60-minute flying tourbillon. For me, it would be the perfect exotic watch if the movement contained a power reserve indicator as well as a Ulysse Nardin Anchor Escapement as part of the tourbillon. 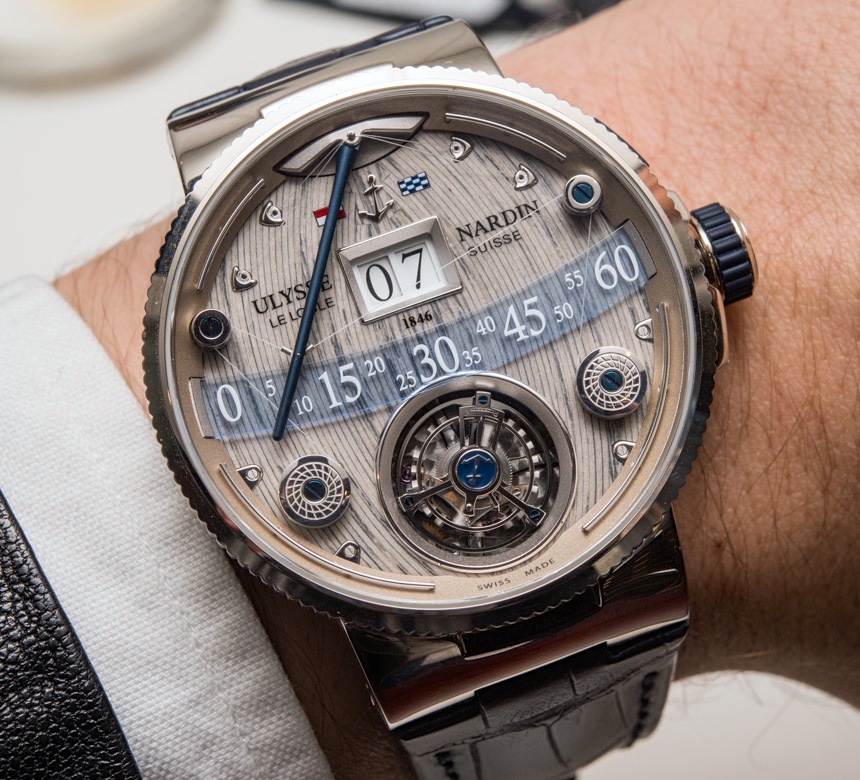 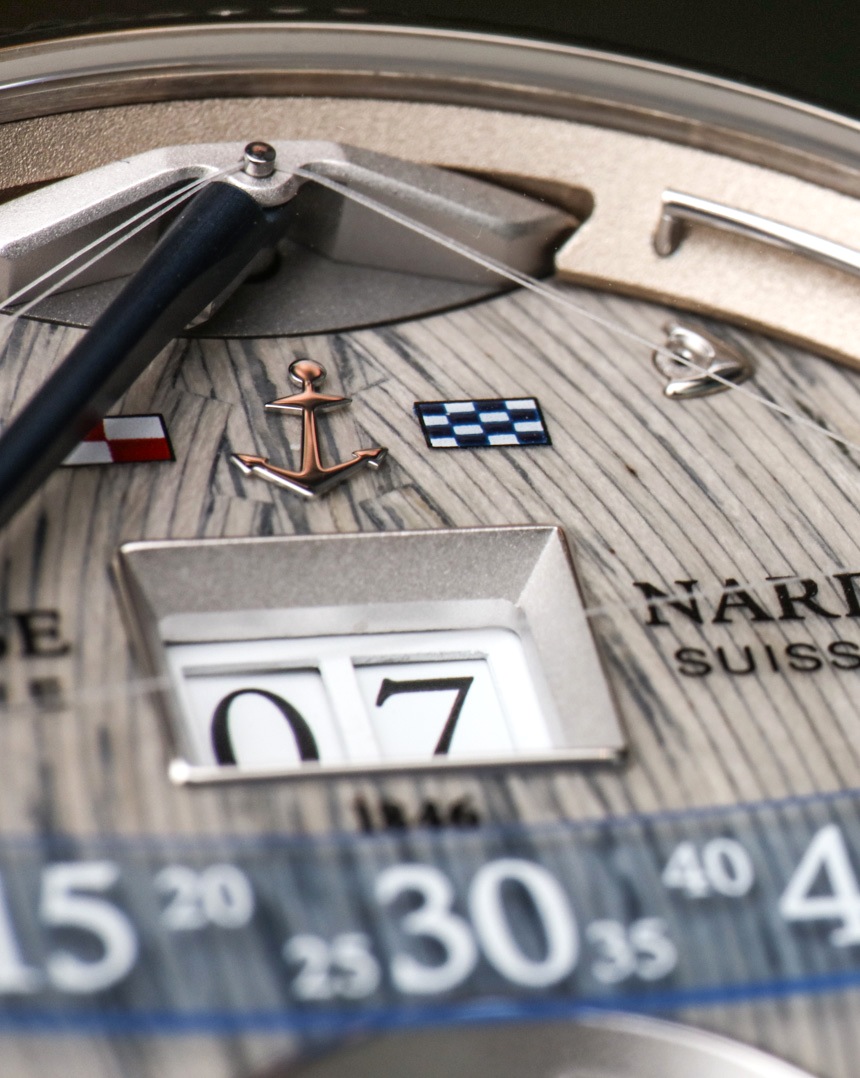 For the dial, Ulysse Nardin continues to follow along with the ship theme, producing it out of pieces of wood marquetry, in what I believe is teak. Note the high-end sailing boat-style pulleys that move the small wires which are just 0.0357mm in thickness. The dial of the Ulysse Nardin Grand Deck Marine Tourbillon is seriously cool, and probably even better if you are a sailing enthusiast. Better yet, it is actually legible. Limited to just a few pieces, I do think Ulysse Nardin will produce future versions of this beautiful, yet whimsical, high-end timepiece.

The Ulysse Nardin caliber UN-630 movement is manually wound and produced from 469 parts operating at 3Hz with a 48-hour power reserve. The movement has a unique finishing, as seen through the rear of the sapphire crystal caseback window, and doesn’t look like any other Ulysse Nardin watches that come to mind. Two barrels are used in the movement, with one to power the time regulation system and another for the complications. Ulysse Nardin (among other brands) does this in order to prevent the system moving the jumping hour discs, or the retrograde minute hands from interfering with accuracy (isochronism). 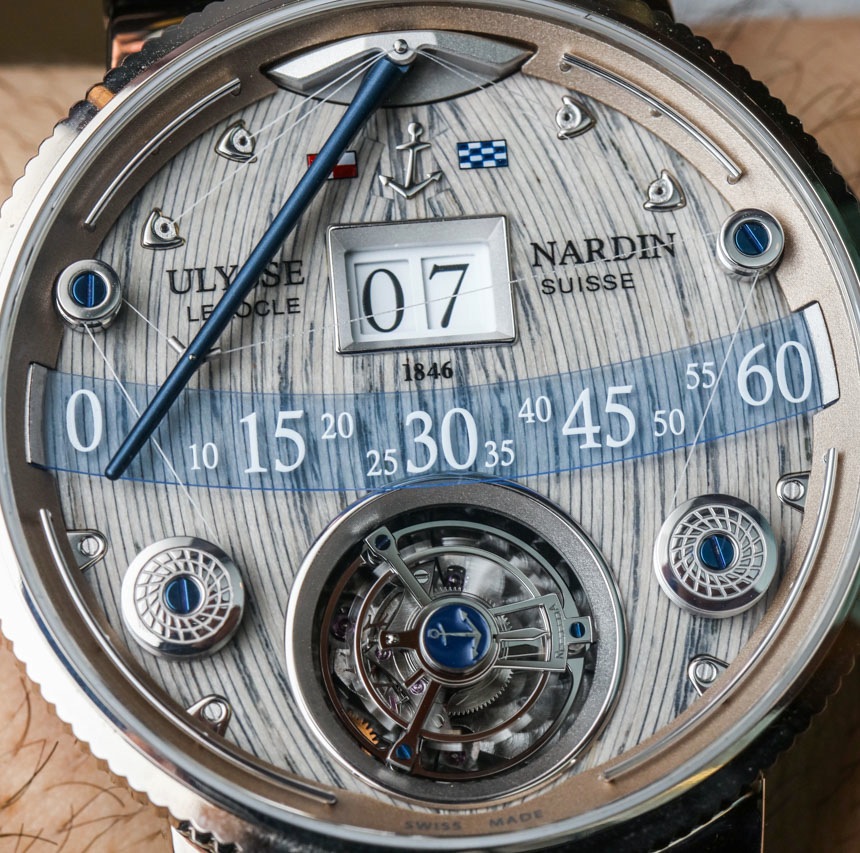