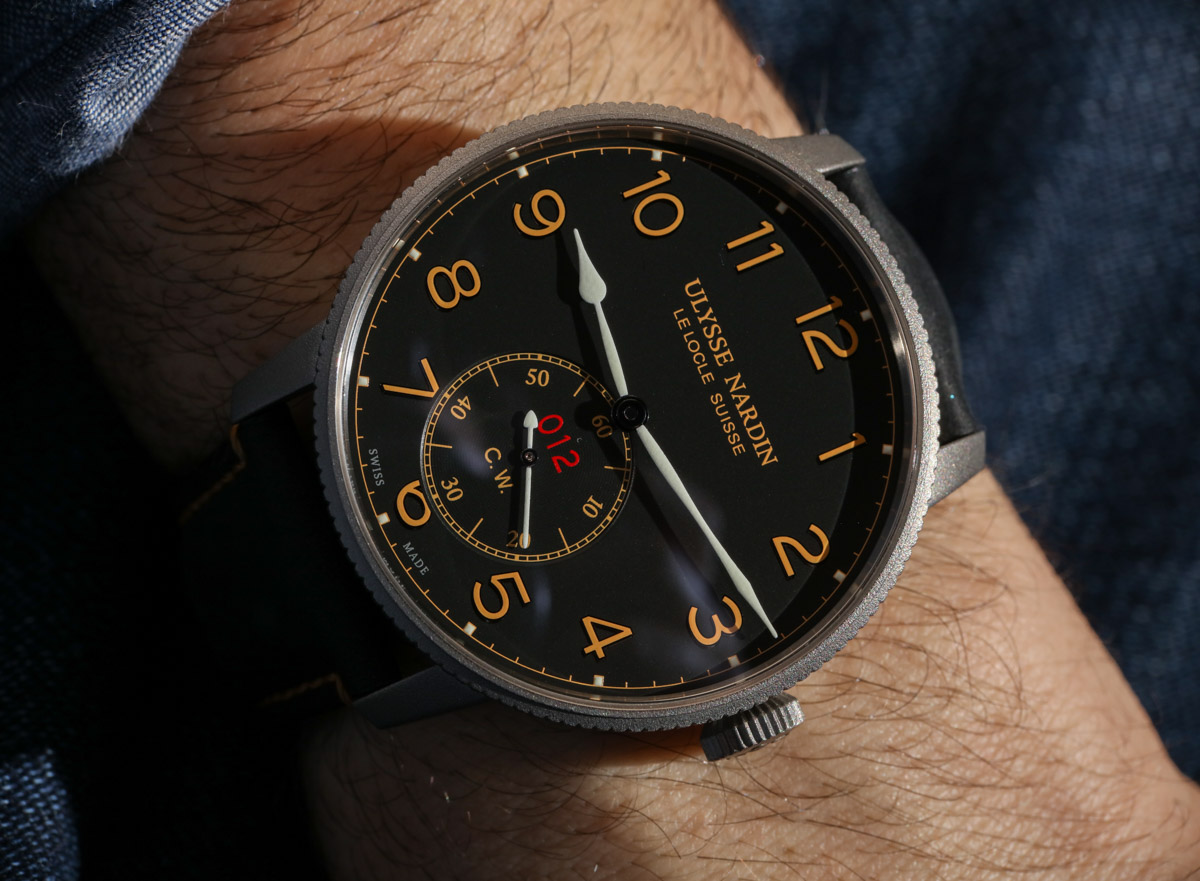 If the new for 2018 (and roughly $100,000) Ulysse Nardin Freak Vision is out of your price range, the other new Ulysse Nardin watch is the Marine Torpilleur Military limited edition (initially debuted on aBlogtoWatch here). This simple, yet satisfying French naval themed deck-style watch is beautiful, boasts a great movement, and mixes legibility and style in a manner that I feel a lot of collectors should enjoy these days. Let’s take a look at this duo of 300 piece (each) limited edition timepieces, which debuted at SIHH 2018. The references are 1183-320LE/62 (black) and 1183-320LE/60 (eggshell).

At close to $8,000 USD, the Ulysse Nardin Marine Torpilleur Military isn’t a budget vintage military-themed timepiece by any means, but at the same time it isn’t trying to directly mimic “bare bones” basic-ness that a lot of military-style watches are going for. The story here is a bit more complicated but ultimately satisfying if you can understand how a design like this comes together. It begins with the fact that Ulysse Nardin has a legitimate history producing marine chronometers – highly accurate clocks used on board ships as official timekeepers and for navigational use prior to modern technological innovations, such as GPS. The contemporary Ulysse Nardin Marine timepiece collection has dials which are based on the look and feel of many of these antique marine chronometer clocks. 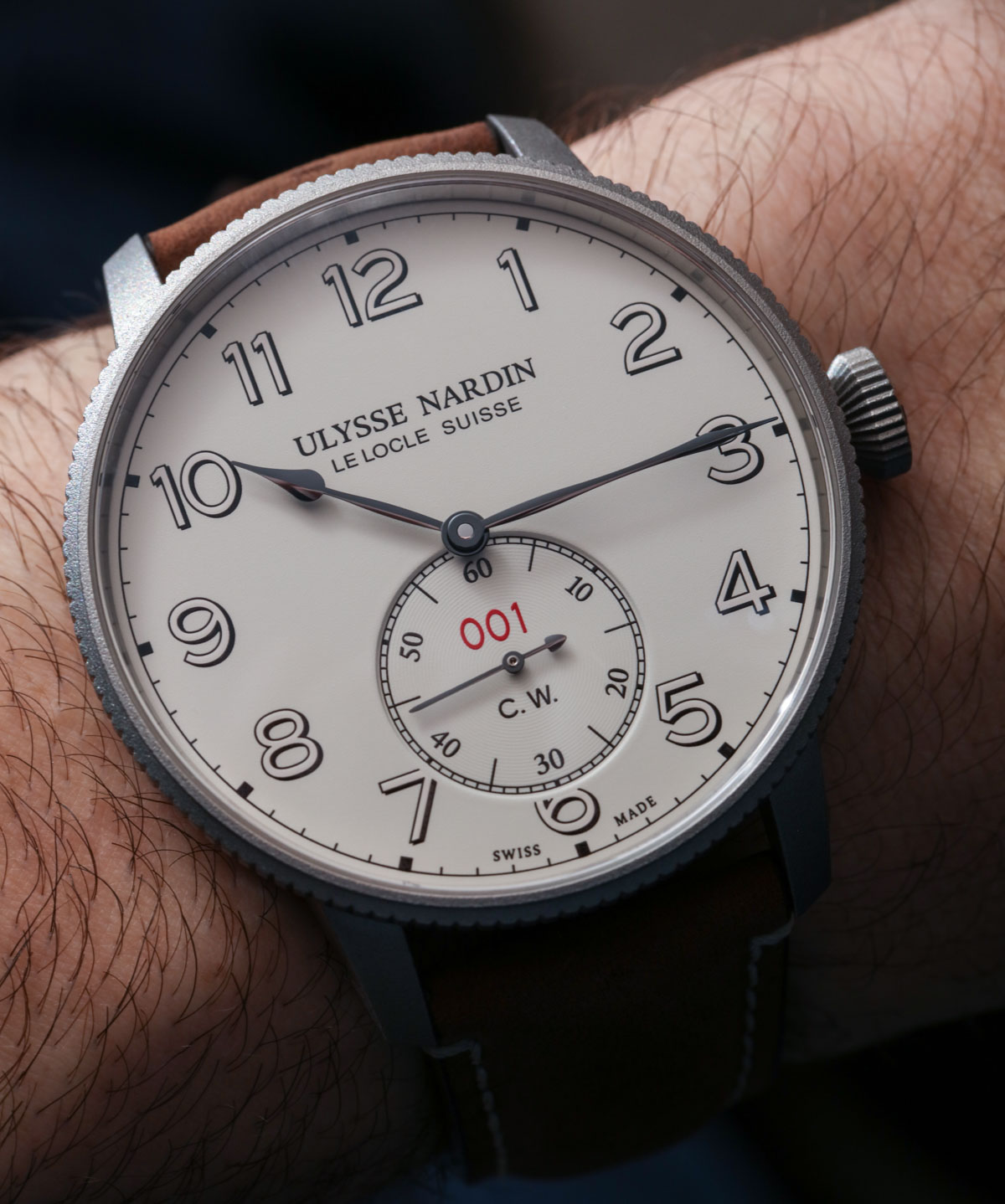 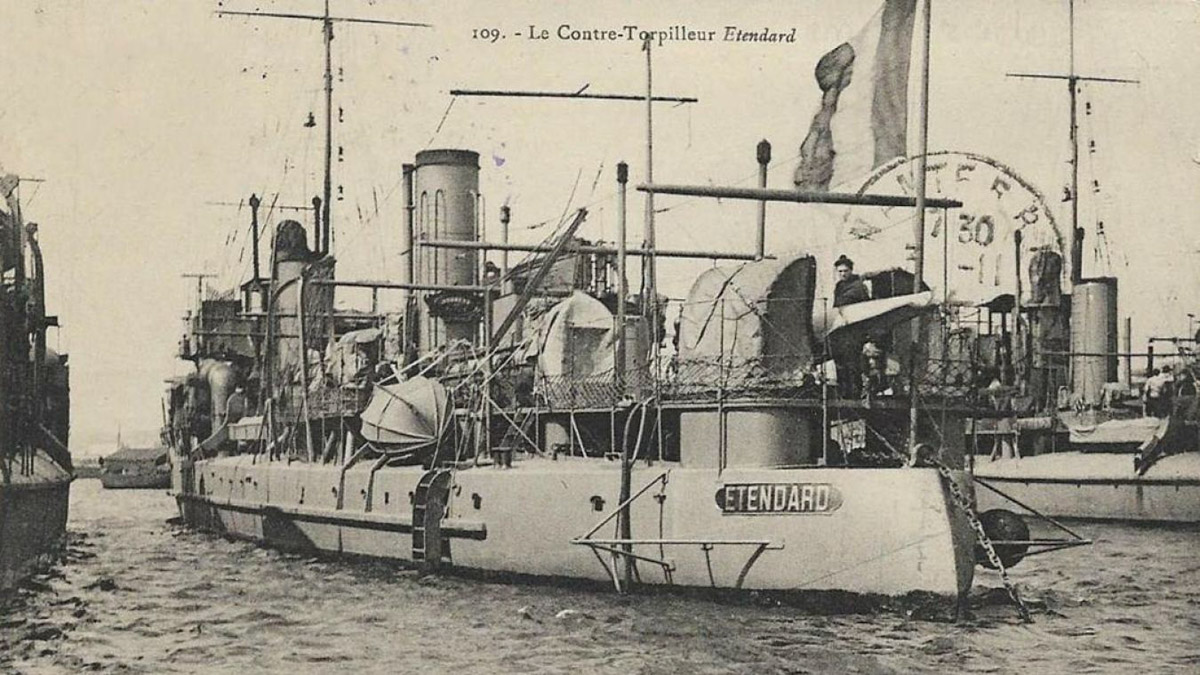 Not all marine chronometers were for military use but some were. Inspired by actual clocks and timepieces used on board military craft in the early to mid-20th century, the Marine Torpilleur Military sees itself as a fitting wristwatch companion for someone aboard a French torpedo boat (aka “torpilleur”) around World War II. The high-contrast legible dial, sandblast-finished steel case, and larger size all speak to this theme. The rear of the Marine Torpilleur Military watch eschews the typical sapphire crystal window caseback for an engraved scene that includes some torpilleur ships. I’ve included some pictures of actual French torpilleur destroyers to highlight how the watch matches the visual theme of the ships.

The point of these limited edition watches isn’t just to create a watch that fits a visual theme, but to also emphasize the fact that actual marine chronometers needed to be very accurate. The “C.W.” initials on the dial of the watches stand for “Chronometer Watch,” and inside the case is an in-house made and well-performing Ulysse Nardin caliber UN-118. Boasting a Diamonsil escapement (diamond-coated silicon which adds durability to the silicon) and a reputation for excellent performance, this 4Hz automatic movement is actually stripped down a bit for use in the Marine Torpilleur Military, with only the time including a subsidiary seconds dial. What I mean by that is the movement also offers a power reserve indicator and date complication which have been left out of the dial as an aesthetic exercise. The movements are nevertheless still COSC Chronometer certified and certainly help complete the theme of having a marine-style chronometer on your wrist – now with more of a “military” angle to it. 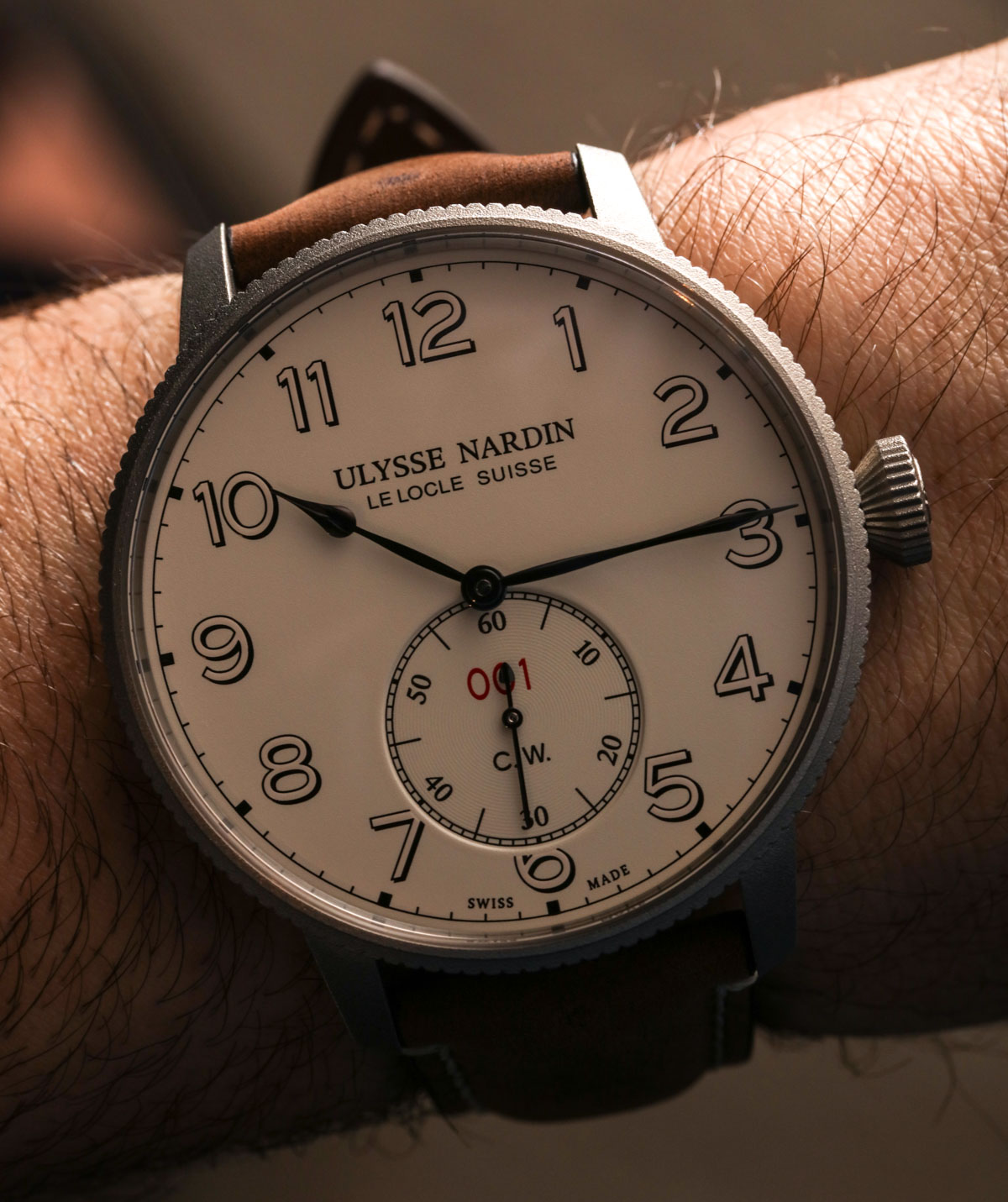 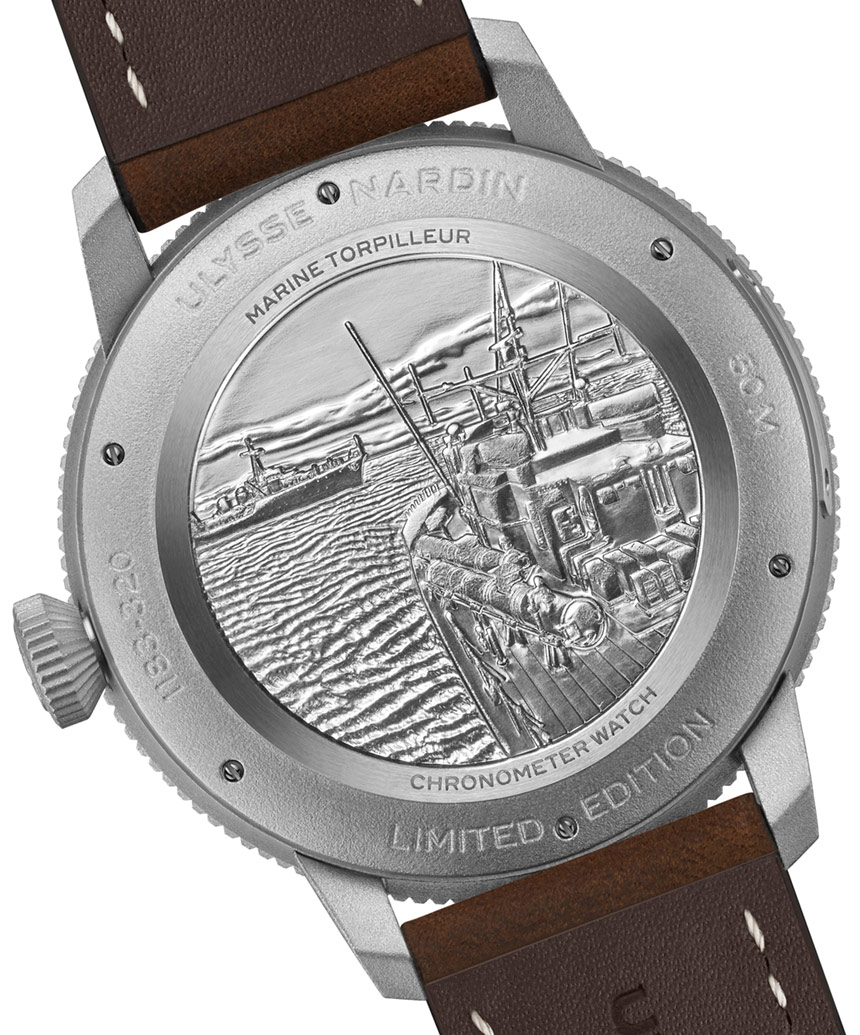 Ulysse Nardin’s product team did an excellent job when making sure that the dials visually pop and offer excellent legibility. The trick of course was to make sure they used entirely non-reflective surfaces, good contrast, a clean design, and and an effectively sufficient level of AR-coating on the flat sapphire crystal. My eyes are always immediately drawn to the most legible watch dials and when I was presented with these timepieces by Ulysse Nardin I was more or less sure they had a hit. Though it might take a few years before enough people handle these watches and see how lovely they are in a relatively non-pretentious manner (given that the price is still deeply in luxury territory). 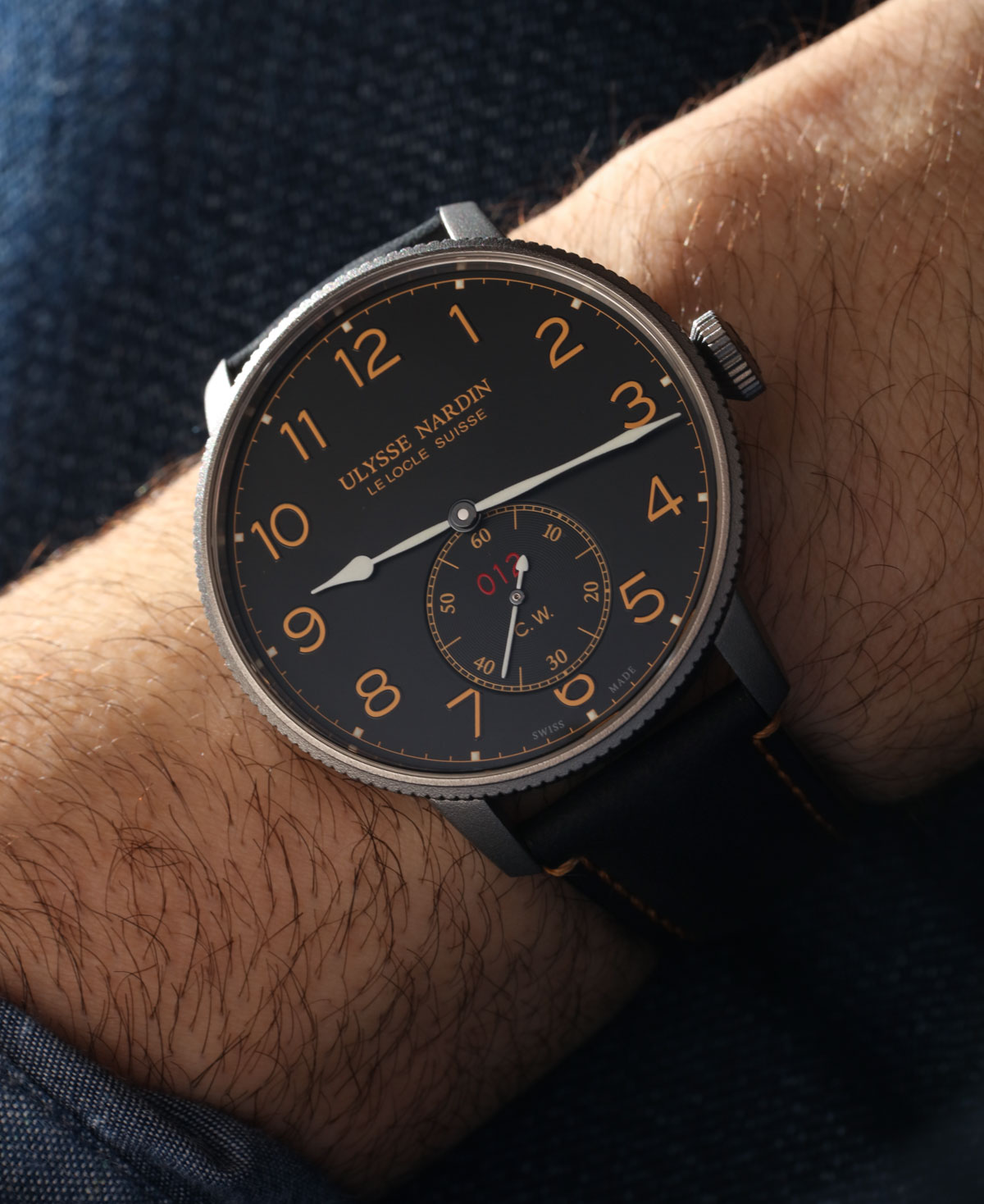 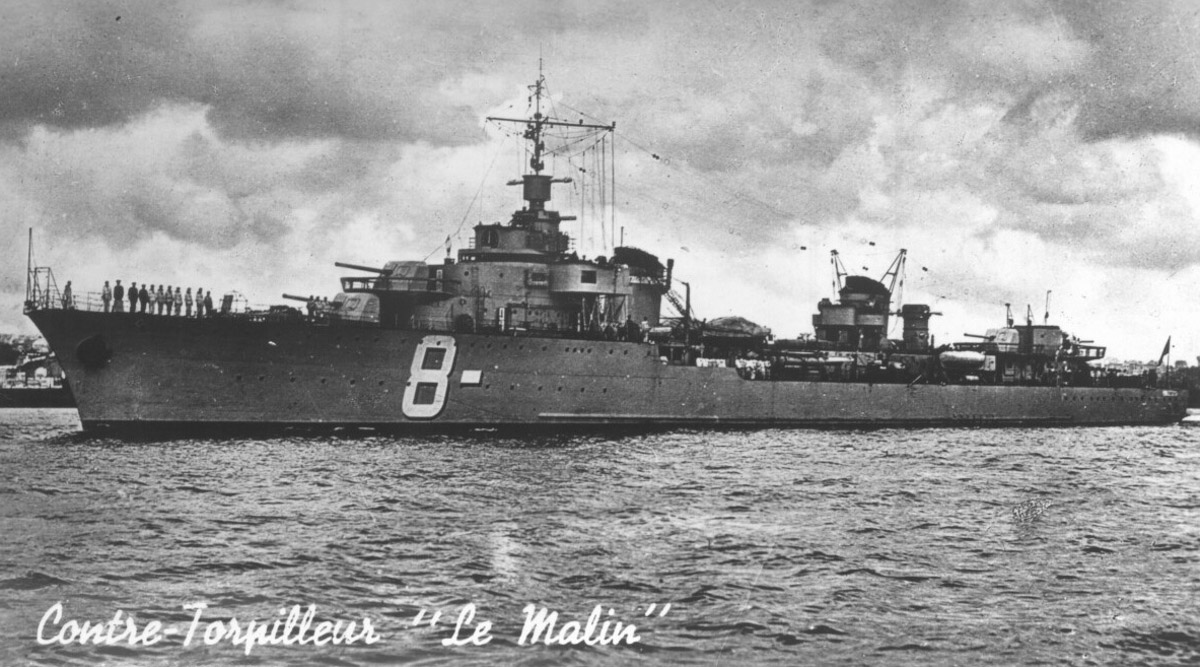 The deck-clock style design of the dial’s hands and hour markers are again winners here. On the eggshell version of the Marine Torpilleur Military you can see how the Arabic numbers are given visual depth by using black in a manner to suggest a drop shadow. The black hands work elegantly against the off-white creamy dial. On the black-dialed model we have crisp white-painted hands which offer a great level of visibility against the matte face. Note that Ulysse Nardin knows not to use pure black or white colors, but rather shades of dark grays, tans, creams, etc. that look more natural and organic. Pure black or white on watch dials simply isn’t aesthetically pleasing all the time, so using more organic colors such as these tends to help make the otherwise instrumental dials more pleasing to the eyes.

The steel case is 44mm wide but only water-resistant to 50m. I would prefer 100m for any watch that is ocean or marine themed – let alone military themed. It’s not about practicality but rather about what you are paying for in a fantasy wristwatch toy that is truly meant to fit the theme. I think Ulysse Nardin did a nice job with the sandblasted case finishing, even though it looks more matte in Ulysse Nardin’s marketing images than it does in person. 44mm wide is the largest size I believe that the Marine Torpilleur watches come, with many of the others coming in slightly smaller sizes such as 42mm wide. 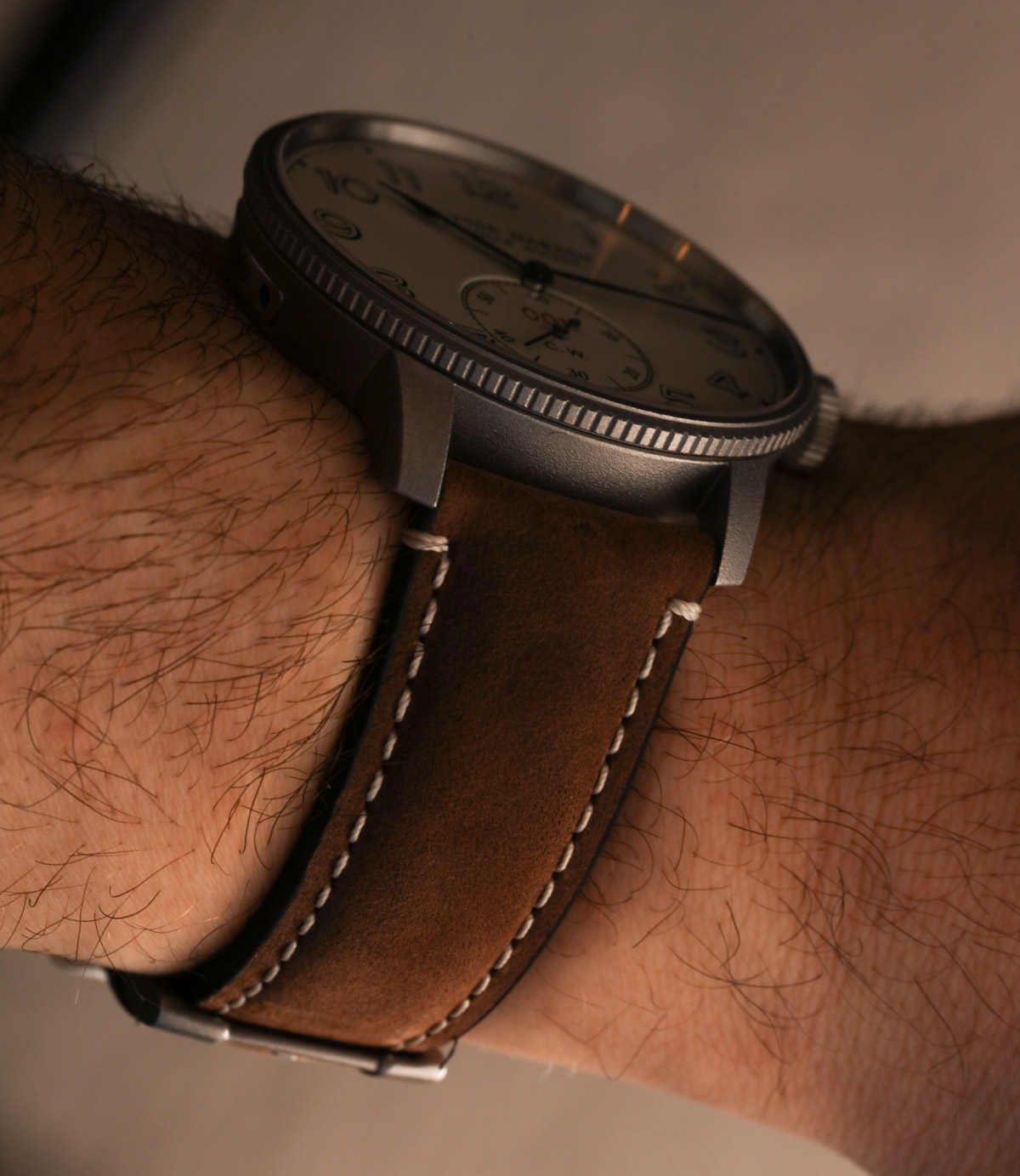 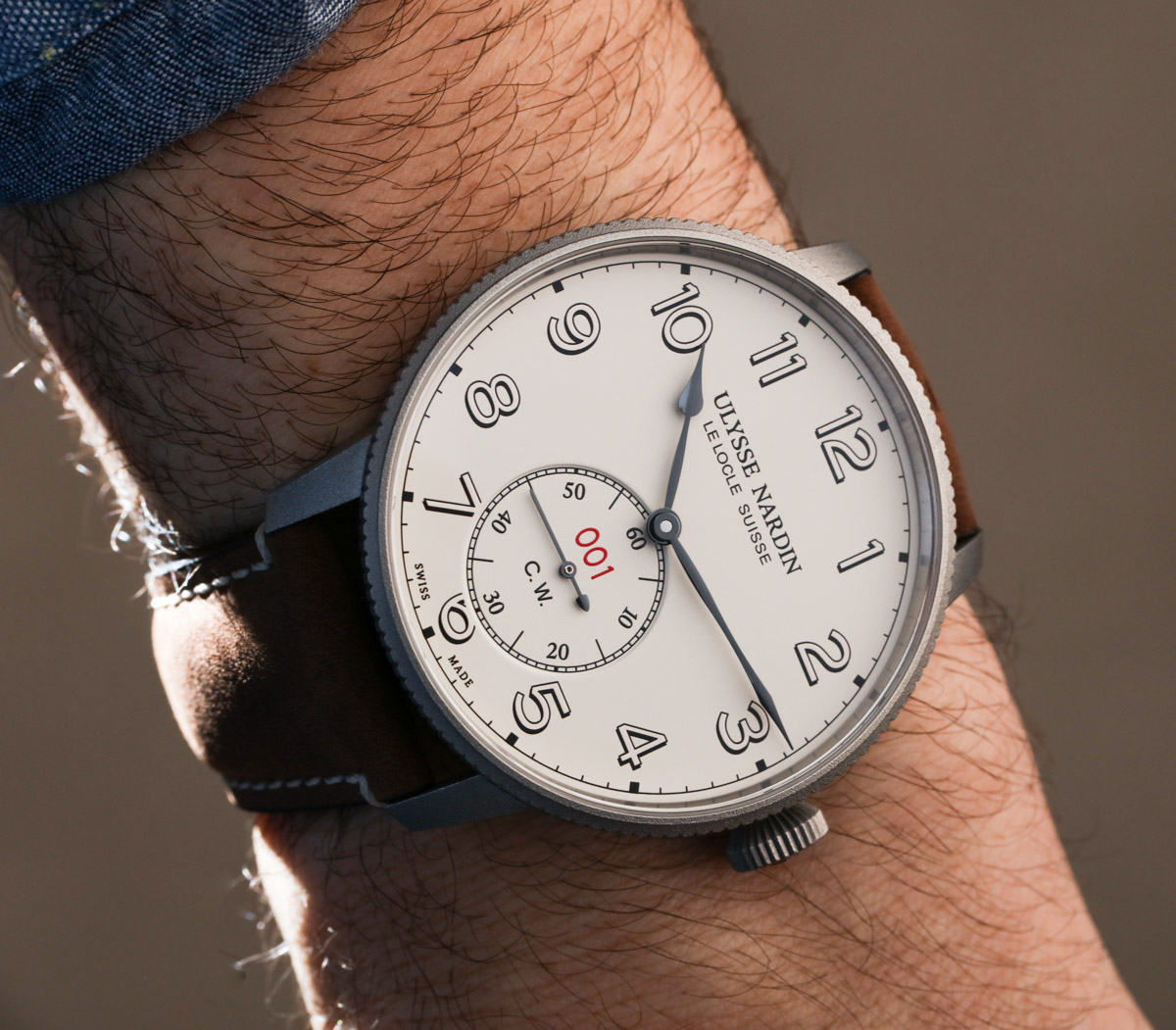 Ulysse Nardin places the limited edition number of each of the watches right on the dial in red – which again evokes the sense of serial numbers of military-issued equipment. It is sort of nice that each person’s version of the watch will look marginally different given that the number on the dial is unique. Attached to the cases are black or brown leather straps that handsomely complete the theme. In my opinion, neither the reference 1183-320LE/62 (black) or 1183-320LE/60 (eggshell) are the nicer model, as they both have design merit as well as their own unique personality. I sort of think of one as the daytime model and one as the nighttime model. Price for each of the limited edition of 300 pieces (per dial color) Ulysse Nardin Marine Torpilleur Military watches is $7,900 USD. ulysse-nardin.com