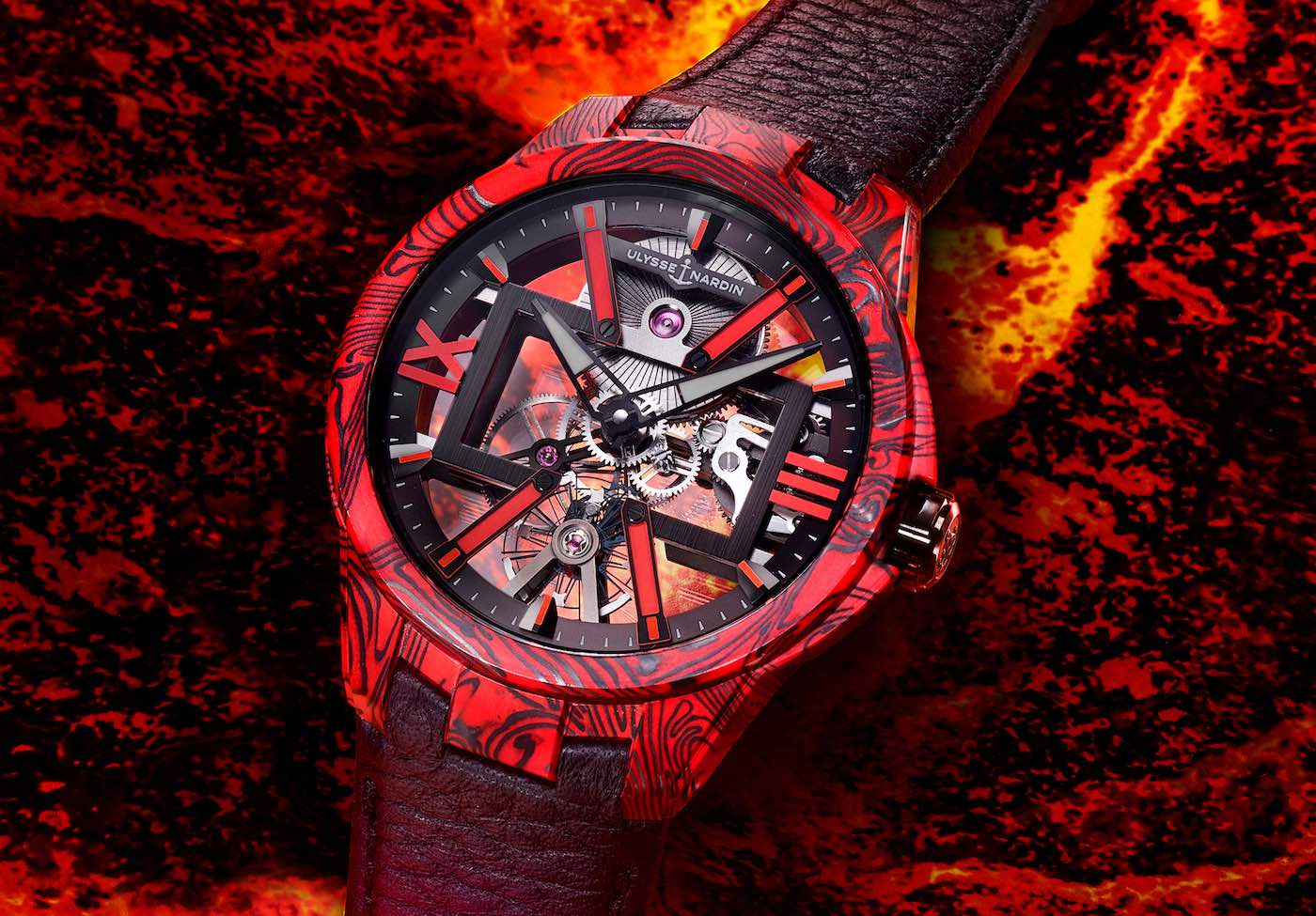 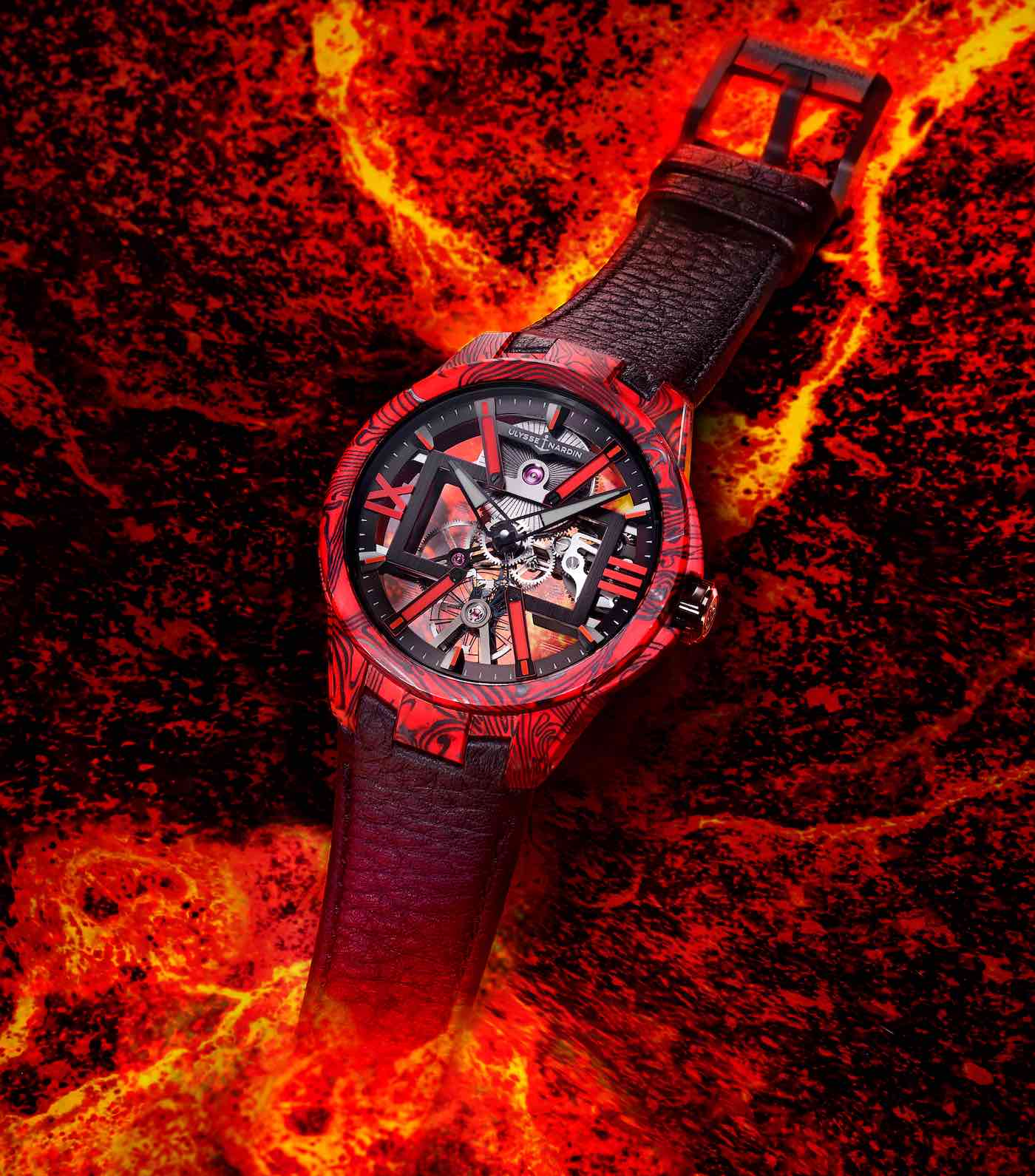 Well, well, well… What fiery madness is this? With some of the most arresting pack shots of 2019, the Ulysse Nardin Skeleton X Magma watch bursts into reality. And while it looks like it has leaped from Satan’s drawing board to terrorize all humankind, I’m assured that, like the rest of its products, this new piece from Ulysse Nardin started life in Le Locle, Switzerland. And it has no intention of razing society to the ground, apparently.

The most striking aspect of this watch (aside from the sweat-inducing lavascape used in the press images) is the case. Described by the brand as “a carbon-fiber tour-de-force,” this watch will polarize, which is one thing that can be said for sure about this new take on an evermore overused material. On the one hand, it looks a bit like the angry big brother of the Swatch Sistem 51, but on the other, it’s an incredibly badass, characterful watch that has the guts to mix technically impressive horology, brand new material technology, and an attention-grabbing aesthetic. 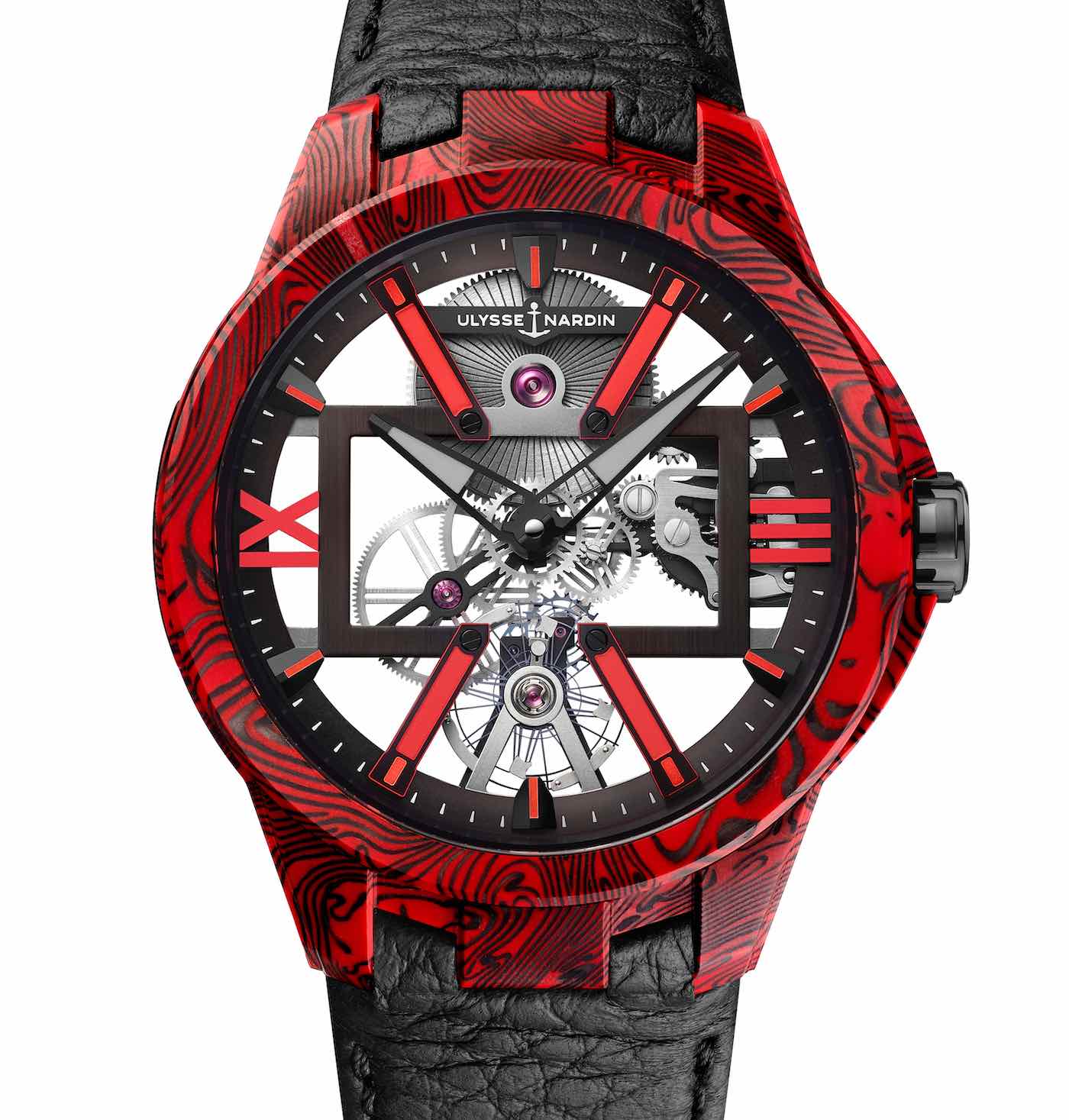 To achieve this effect, carbon fiber is mixed with red epoxy resin, creating a marbled effect that is unique from piece to piece. This makes the watch housing incredibly light and comfortable on the wrist. Whether this piece goes too far in the weight-saving category, resulting in a product that feels insubstantial is another divisive talking point. When it comes to the weight of watches, my personal feelings vary on a case-by-case basis. If it makes sense with the overall design (as I believe it does with this watch), then I find I’m quite sympathetic to it, but if, as in the case of my beloved Omega Ploprof, it undermines a significant characteristic (however opinion-splitting) of the design, then I’m not so much a fan.

The Ulysse Nardin Skeleton X Magma is 43mm in diameter. The brand pitches this as “compact” (and the price as “accessible”), but this will obviously rankle some. That said, avant-garde designs of this nature tend to appeal to those who like their watches more noticeably proportioned, so this might have been a wise choice.

Technically, the watch is quite impressive. With its manual-winding UN-371 movement, which is heavily skeletonized and integrated to the dial, the Ulysse Nardin Skeleton X Magma leaves little to the imagination. The bright red numerals pair well to the grey hands. Both numerals and hands are treated with Super-LumiNova.

Being able to see straight through a watch is always going to divide the consumer population, but with such a generally ambitious concept I think it works pretty well. The four-day power reserve is nice to see, and the Silicium minuterie gear train and 3Hz Silicium balance remind anyone who might have momentarily forgotten that this is a typically futuristic offering from a storied Swiss watchmaker. The price for this ‘hot’ property will be $25,000. You can learn more at ulysse-nardin.com.