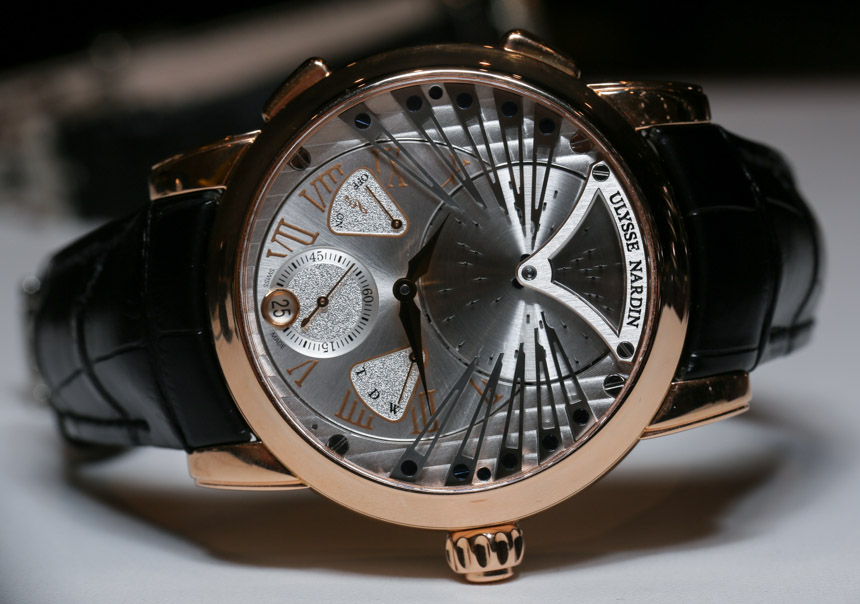 I will admit that when I first learned about the Ulysse Nardin Stranger watch earlier in 2013 (covered here on Forbes) I thought it was a bit silly. Not silly in the sense that the watch was any more strange than the usual fare that gets my interest, but in the entire presentation. Ulysse Nardin held an event with brand friend Dieter Meier (of band Yell0 who sang “Oh Yea” that was a title song in Ferris Bueller’s Day Off – how random is that?) to launch the watch who apparently had an involvement with the design. The watch played music from Frank Sinatra’s “Strangers in the Night,” and in a sense the entire mechanical creation was a sort of classy music box for me. Yes, it sound exactly like something Ulysse Nardin would do and it took years to make.

When meeting with Ulysse Nardin after I initially wrote about the watch I finally got a chance to see this music box “Stranger” watch for myself. You can clearly see traces of brand DNA in the watch from their other musical creations. In fact Ulysse Nardin has a range of musical watches from the Sonata (hands-on) with its chiming alarm function to more traditional minute repeaters in very non-traditional watches such as the Minute Repeater Jaquemarts (hands on here). Having said that, while the Stranger is a musical watch like many others, it does not produce sound with hammers and gongs. It is more like a traditional pins and barrel-style music box. Though instead of a barrel it uses a disc. 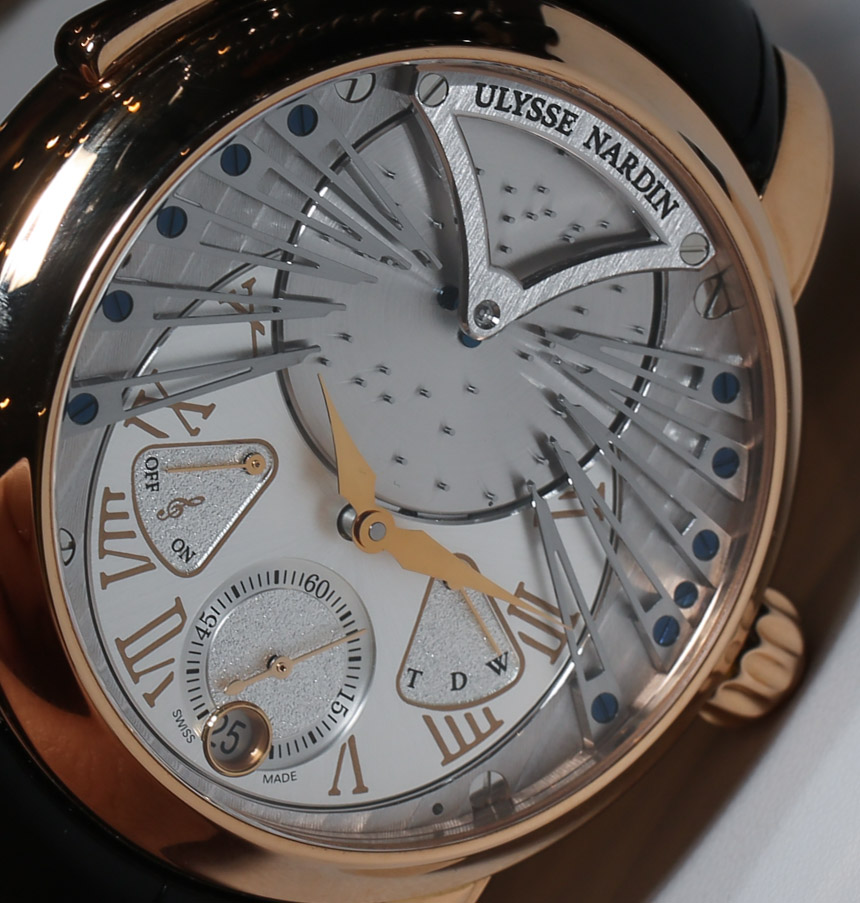 Music box watches are incredibly rare. There are a few, but these are few and far between. An actually (relatively) affordable one is the Boegli Grand Opera Limited Edition. Music box watches simply don’t have that big of a market. They aren’t quite as complicated as minute repeaters, but they also don’t have the same watch nerd appeal. With about five years of development under its belt, the Stranger does hold a few interesting features. What Ulysse Nardin did was to combine the music box function with a sonnerie-style complication. When turned “on” the watch plays the music box complication each hour on the hour. It can also be played on demand of course.

Inside the Stranger is the in-house made Ulysse Nardin caliber UN-690 manually automatic movement. It has a 48 hour power reserve, and like more and more Ulysse Nardin movements, it features some silicon parts. These include silicon parts for the balance spring (hair spring) in the oscillator and for the anchor. The movement displays the time in an off-centered dial and has a subsidiary seconds dial as well as the date. 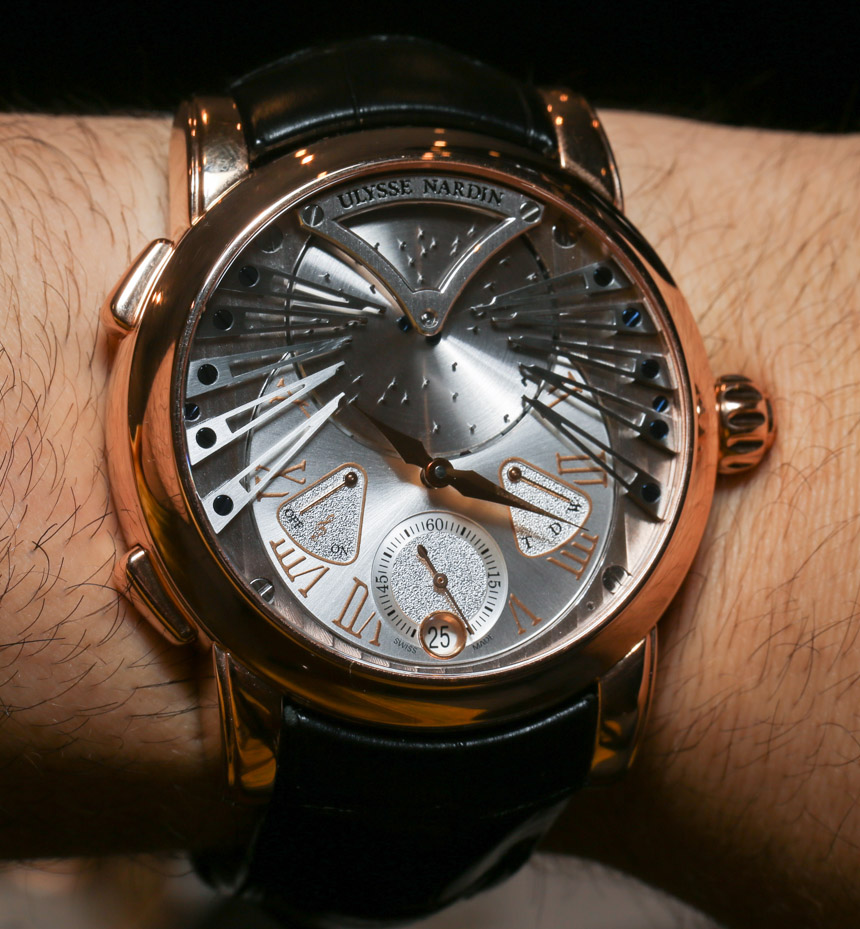 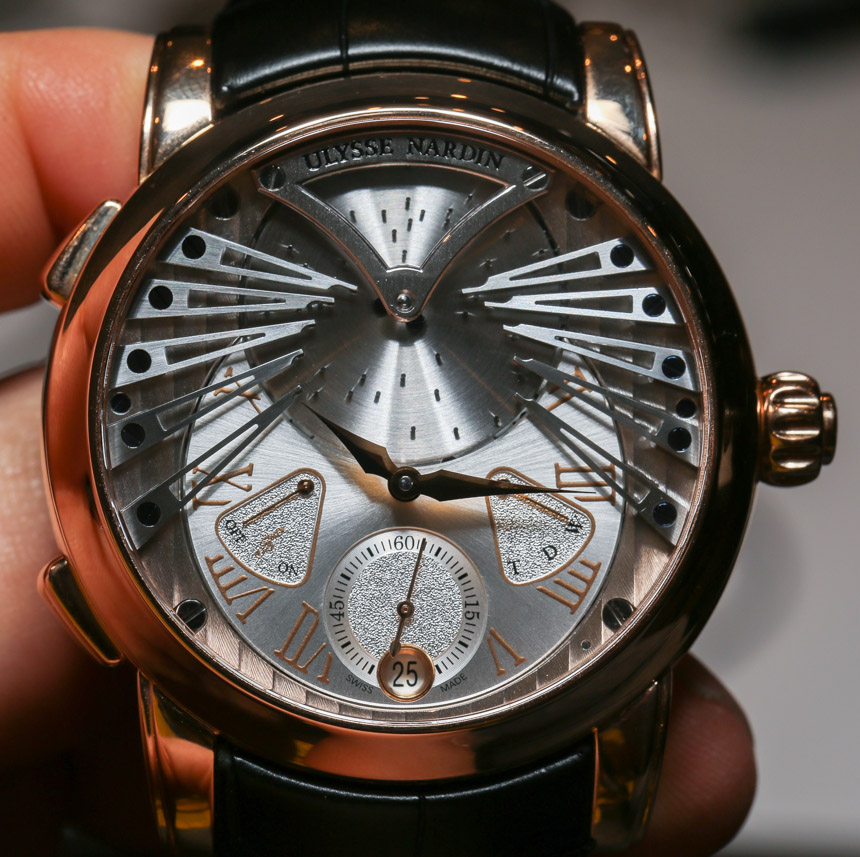 Unlike most watches, the crown doesn’t pull out. Ulysse Nardin opted for a crown with a built in pusher that cycles through functions such as winding, setting the time, or setting the date. There is a crown selection indicator on the dial. As far as I can recall this is the first time I’ve seen Ulysse Nardin do this. When I saw the Stranger, the music box function was still being tweaked. It worked just fine, but Ulysse Nardin wasn’t yet happy with the volume of the sound it produced.

The operation of the mechanism is delightfully clear. In fact the entire idea behind the watch is for the method of the music to be anything but a stranger. A disc with small pins spins and when the pins strike a needle it causes a note to be played. The length of the melody is actually really impressive given what feels like a limited number of pins. More than one pin hitting needles is what causes different notes to be played I believe. The system is very clever, and I feel this is the first time anything like this was designed into a wristwatch. The project was imagined by Ulysse Nardin’s CEO Rolf Schnyder who is now deceased. Patrik Hoffman who succeeded him continued the project until the watch was debuted in 2013. 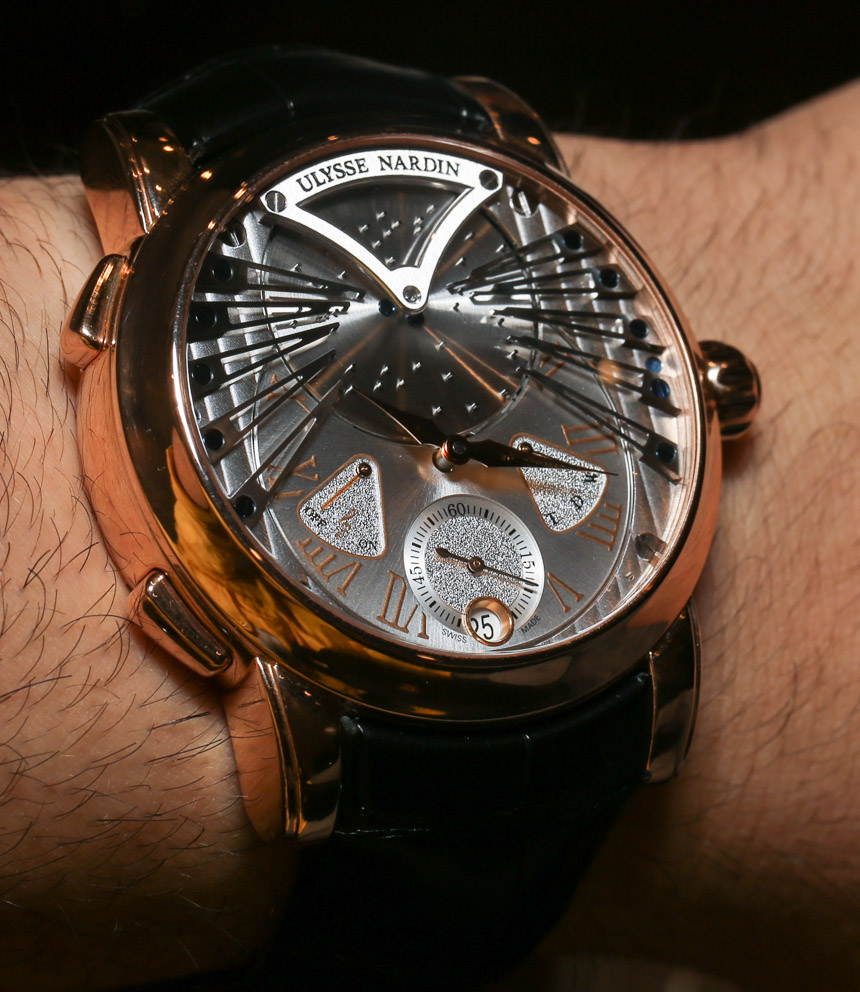 While the first limited edition watch only plays a piece of Stranger in the Night, Ulysse Nardin assured me that they were working on future versions that would play other songs. The question of course remains as to who the type of buyer is that wants a music box watch? At 45mm wide in 18k rose gold the Stranger is clearly a men’s watch. Very much a “Ulysse Nardin,” it packs equal parts traditional watch making with a sense of fun and silliness that does not take itself too seriously. That is something I really respect about the brand – that they do admittedly strange stuff like this, and in the end we all appreciate it. The Ulysse Nardin Stranger watch is part of a limited edition of 99 pieces with a price of $116,000. ulysse-nardin.ch