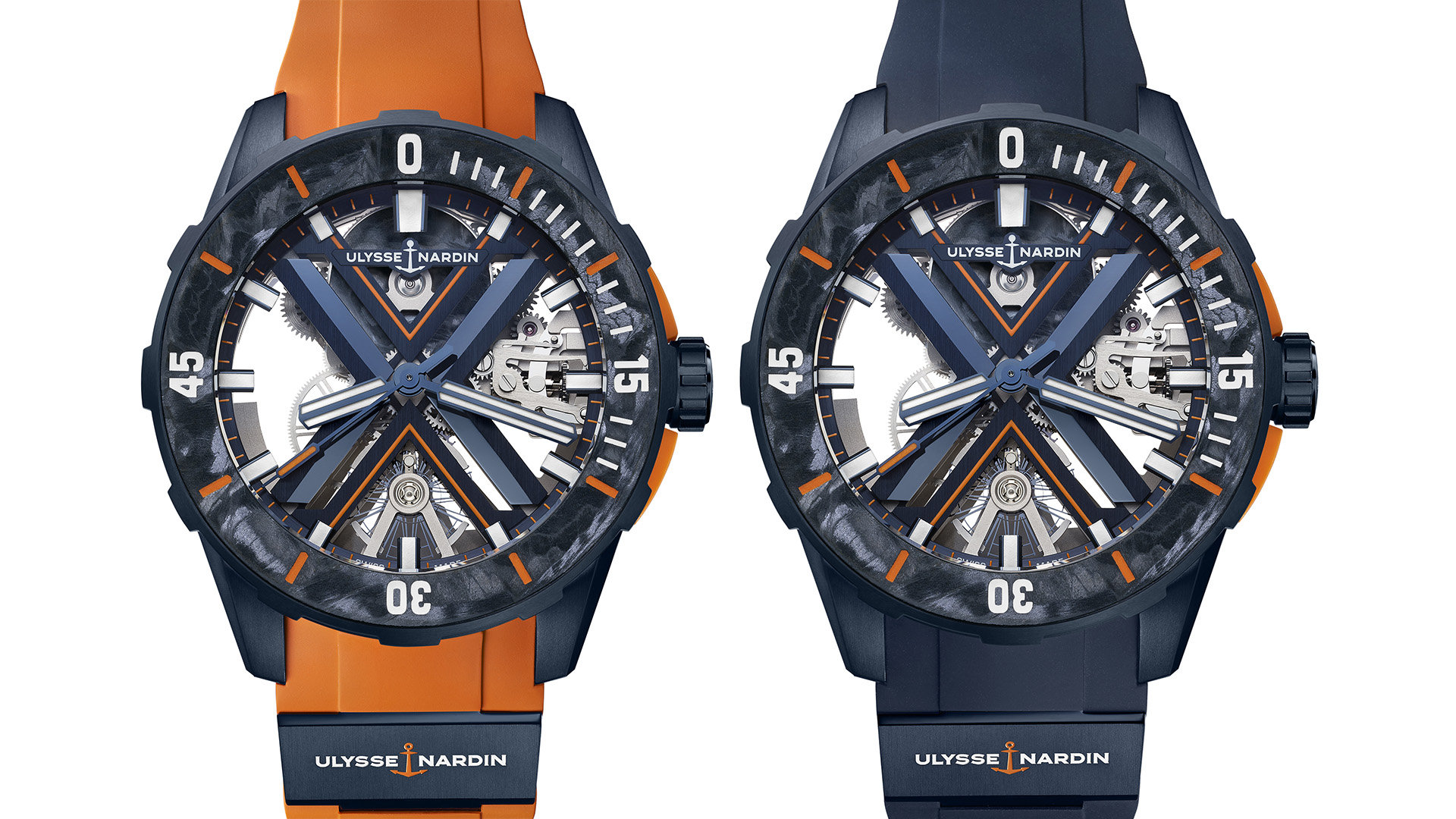 Many words can be used to describe Ulysse Nardin’s deep and varied modern lineup, but one unifying concept that ties the brand’s offerings together is audacious design. This commitment to bold and aggressive style flows through its 2021 novelties collection, and the new limited edition Diver X Skeleton is a prime example of this. By combining the impactful and futuristic tool watch principles of the successful Diver X line with the intricate showcasing of the Skeleton X series, the limited edition Ulysse Nardin Diver X Skeleton offers one of the brand’s most unrestrained and vibrant diver offerings to date. 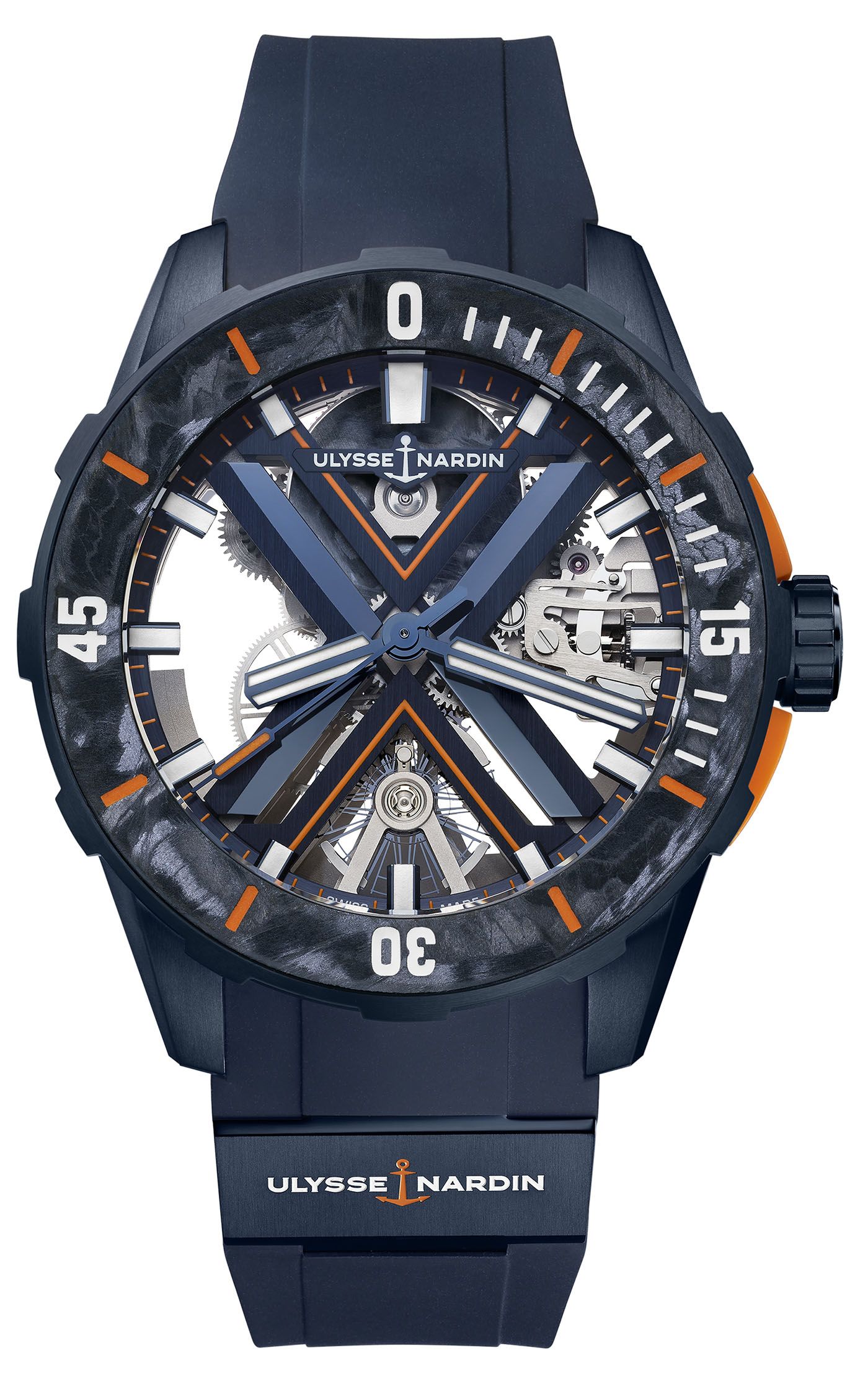 The 44mm case of the Ulysse Nardin Diver X Skeleton follows the same sporty modern pattern as previous Diver X models, with a heavily toothed unidirectional dive bezel, distinctive stepped lugs, and low, narrow rectangular crown guards. This combination leads to a bold, hefty presence in initial images, but Ulysse Nardin increases this model’s visual impact further with a few custom touches. The case is finished with a mix of bead blasted and brushed surfaces, then capped off with a deep desaturated navy blue PVD for a dark and oceanic matte look. The concave bezel insert shares this blue shade, but adds a dynamic range of accents with its Carbonium carbon composite construction and bright white diving scale with safety orange accents. This dynamic orange tone reappears for the rubberized orange crown guards, visually breaking up the case side and injecting a touch of dramatic contrast. Ulysse Nardin rates the case of the Diver X Skeleton for a respectable 200 meters of water resistance. 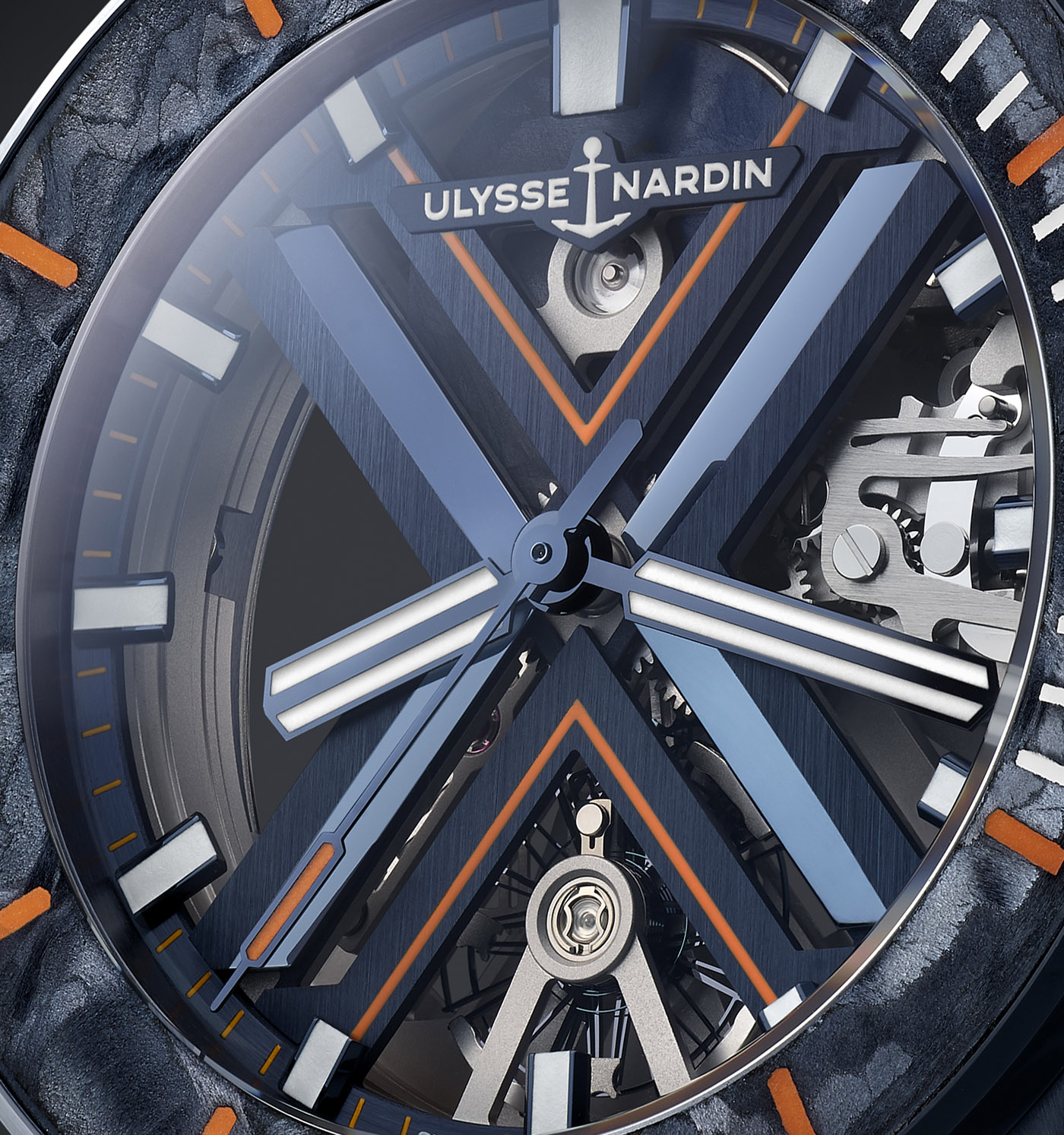 Ulysse Nardin carries over the central “X” motif of the Diver X line with the Diver X Skeleton but carves away nearly everything else to showcase its reworked in-house movement. This multi-part centerpiece functions as much of the bridge assembly for the movement itself, and the brand emphasizes its multi-part construction with several visual layers and a mix of blue PVD finishing shot through with vibrant orange accents. The beveled rectangular indices and distinctive paddle hands of previous Diver X models make an appearance here in the same PVD blue for a cohesive look, and the brand further integrates the internal and external looks with a bezel-matching blue Carbonium cover for the mainspring barrel at 12 o’clock. Ulysse Nardin visually balances this element at 6 o’clock with the intricate and airy silicon balance, with its Ferris wheel-esque arrangement of nickel flyweights. 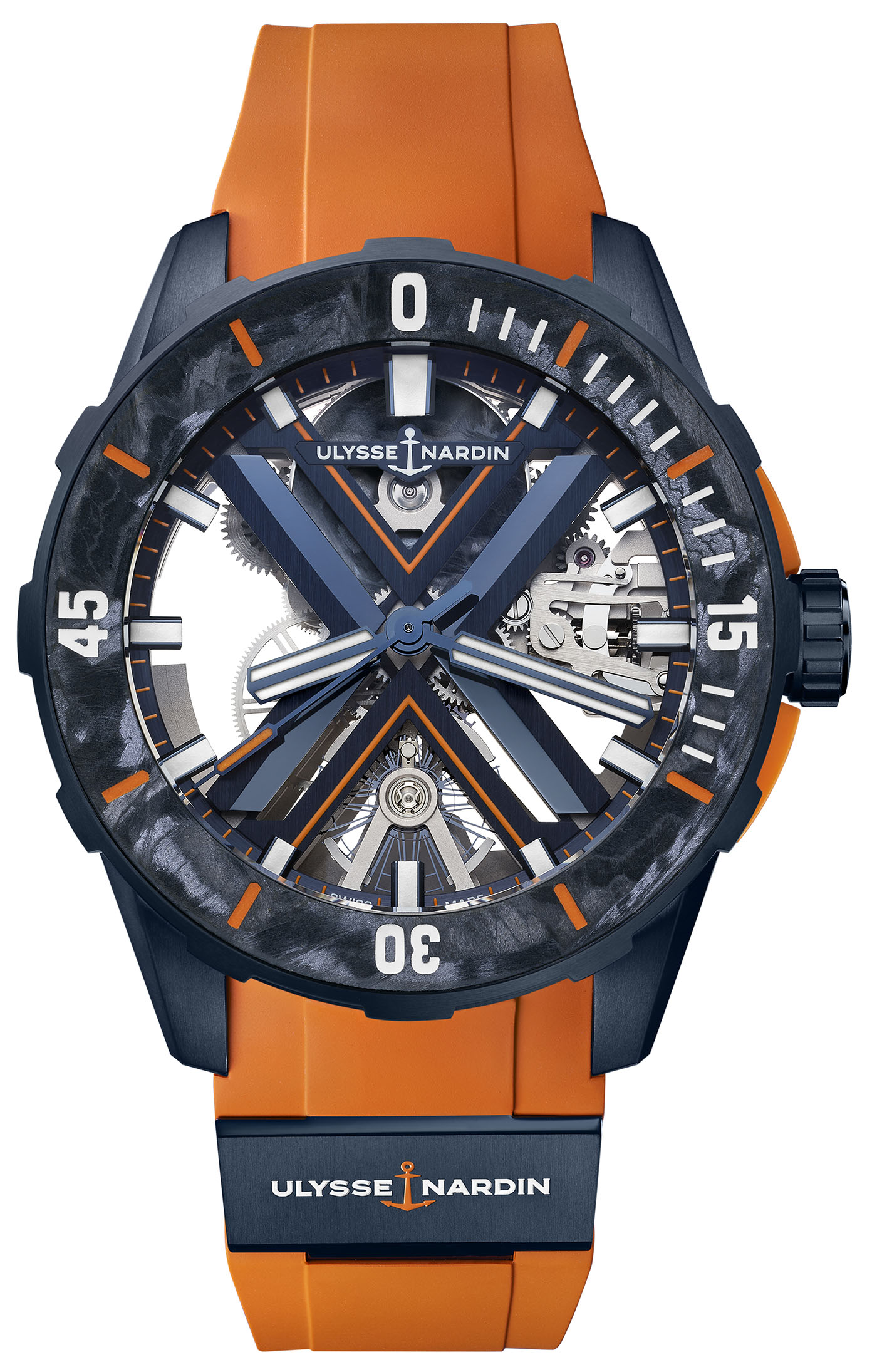 Inside the Ulysse Nardin Diver X Skeleton beats the in-house UN-372 automatic movement. Using the Skeleton X line’s UN-371 movement as a base, the UN-372 adds an X-shaped winding rotor to the skeleton design. Outside of the skeleton flourishes, finishing for the UN-372 remains somewhat spartan, without embellishment to distract from the silicon escape wheel, anchor, and balance assembly. The power reserve stands at 96 hours at a slightly low 21,600 bph beat rate. The Ulysse Nardin Diver X Skeleton is paired with the brand’s modern and sporty rubber strap in a choice of either matching midnight blue or a bold diving orange for added visual impact. 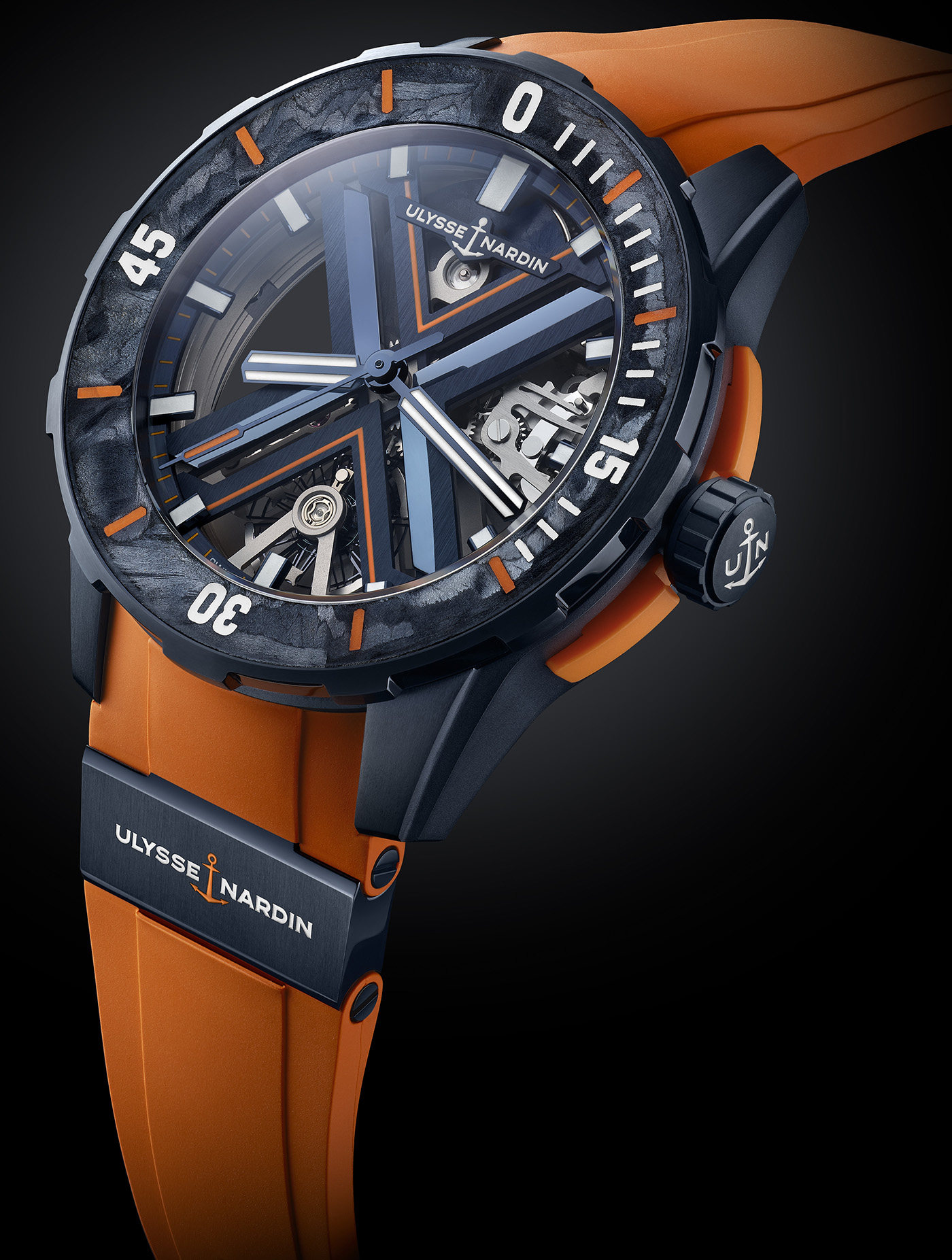