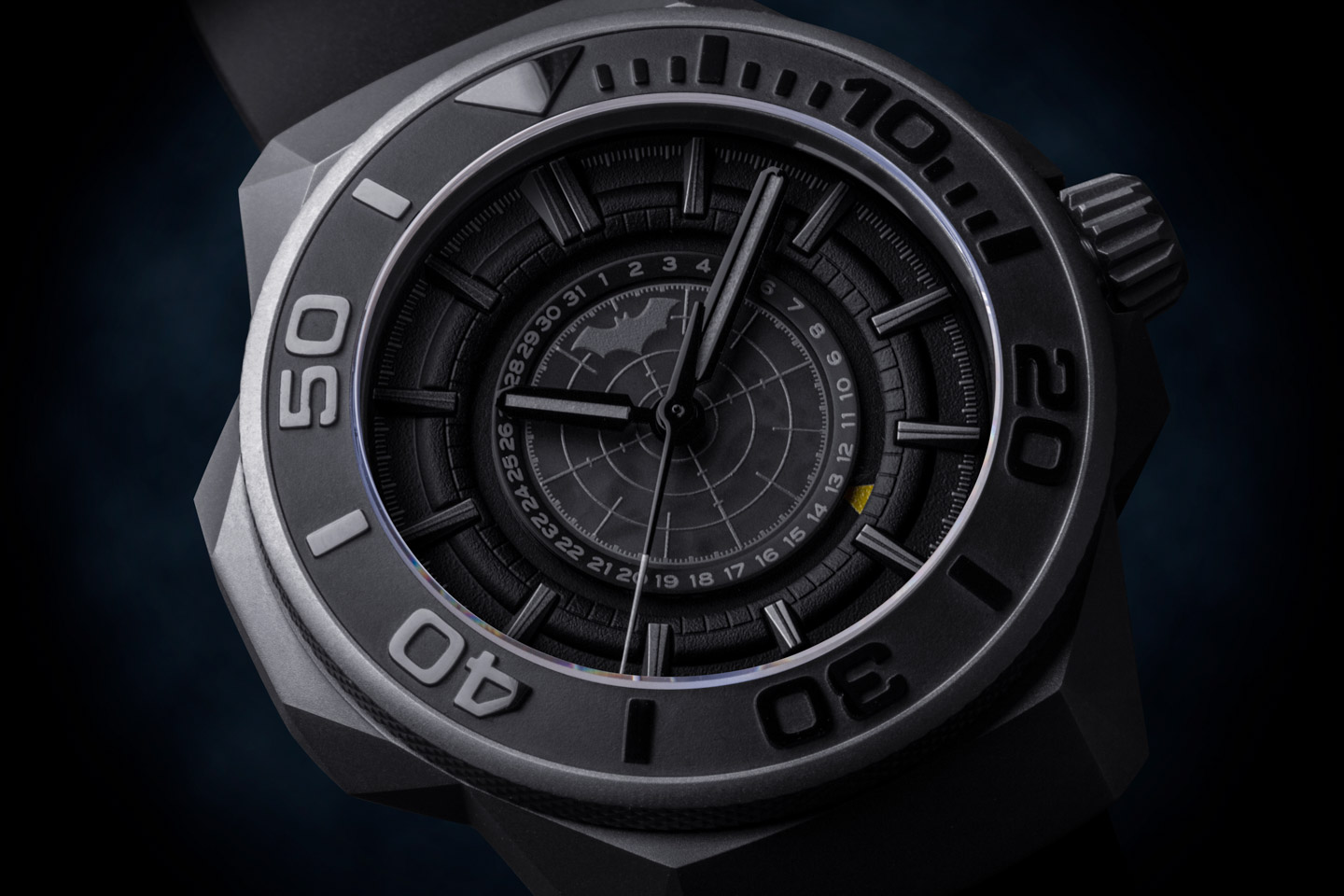 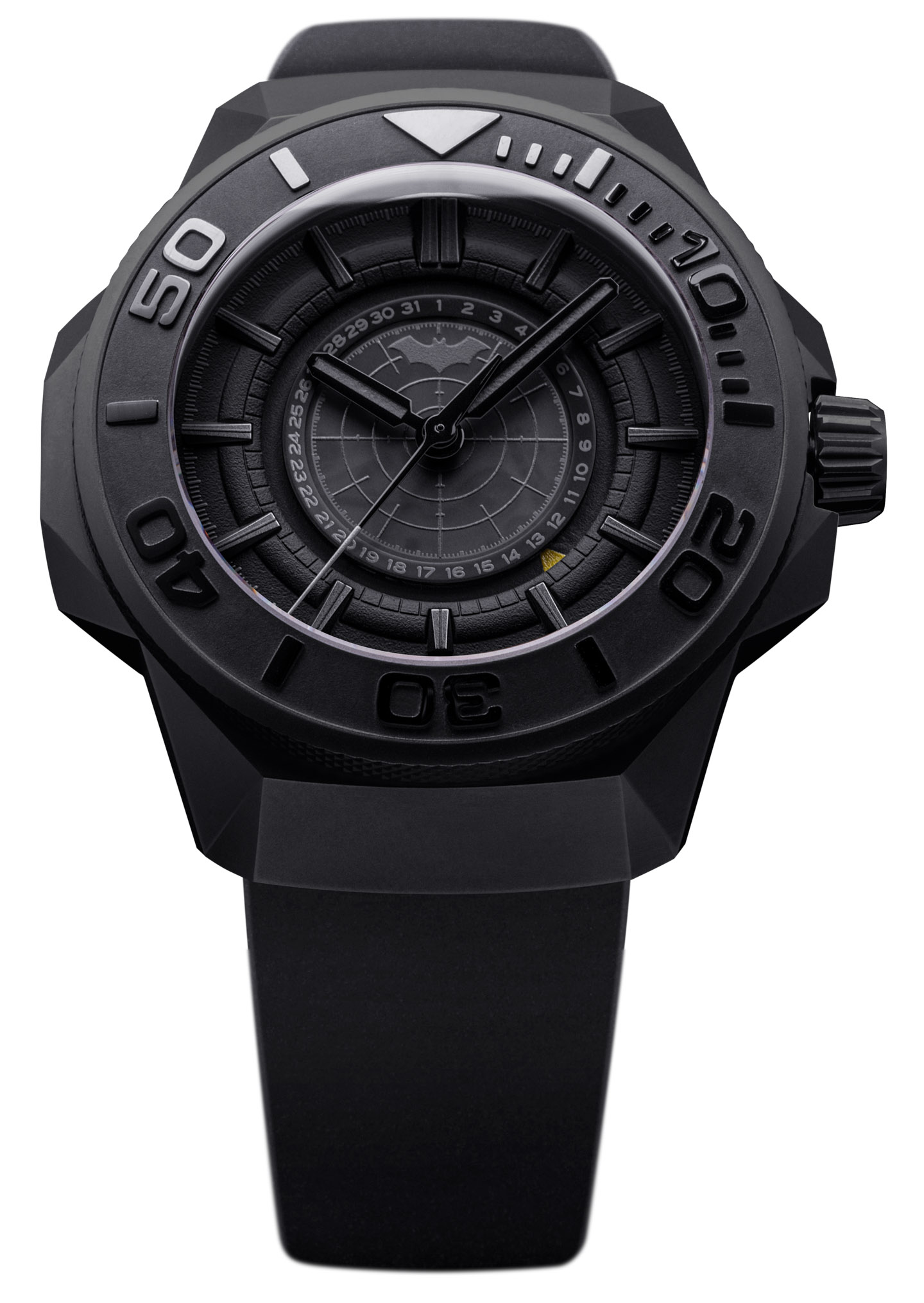 Whereas the original UNDONE Batman watches celebrated the 80th anniversary of the famed DC Comics franchise, the UNDONE x Batman Quantum is a more modern, original take on the Batman watch. The UNDONE design team specifically focused on creating a design that not only closely evoked Batman’s technical universe, but also a timepiece they imagined Batman himself might wear. As such, the UNDONE team used inspiration from an assortment of Batman gear, vehicles, and technologies as the starting point for the Batman Quantum watch. 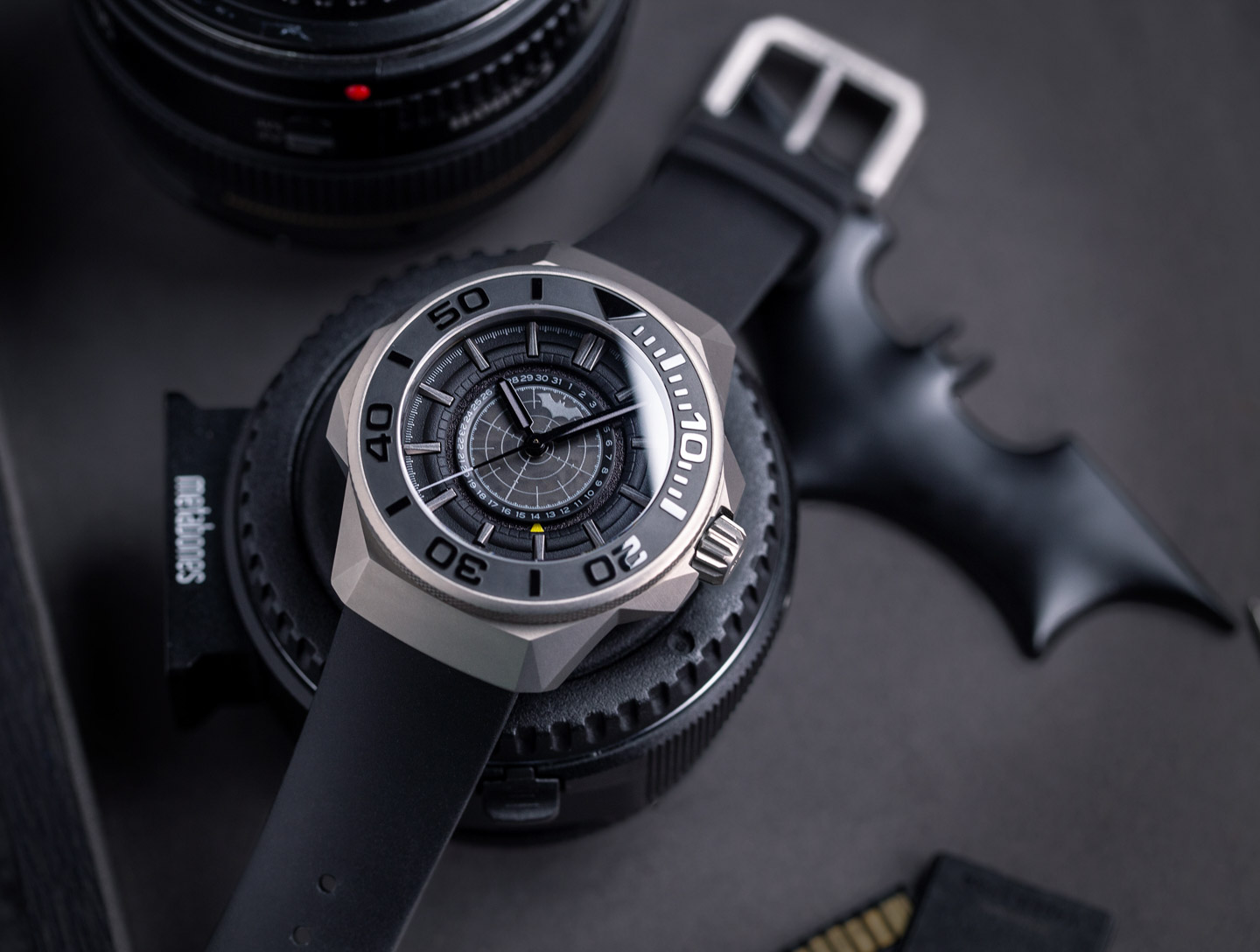 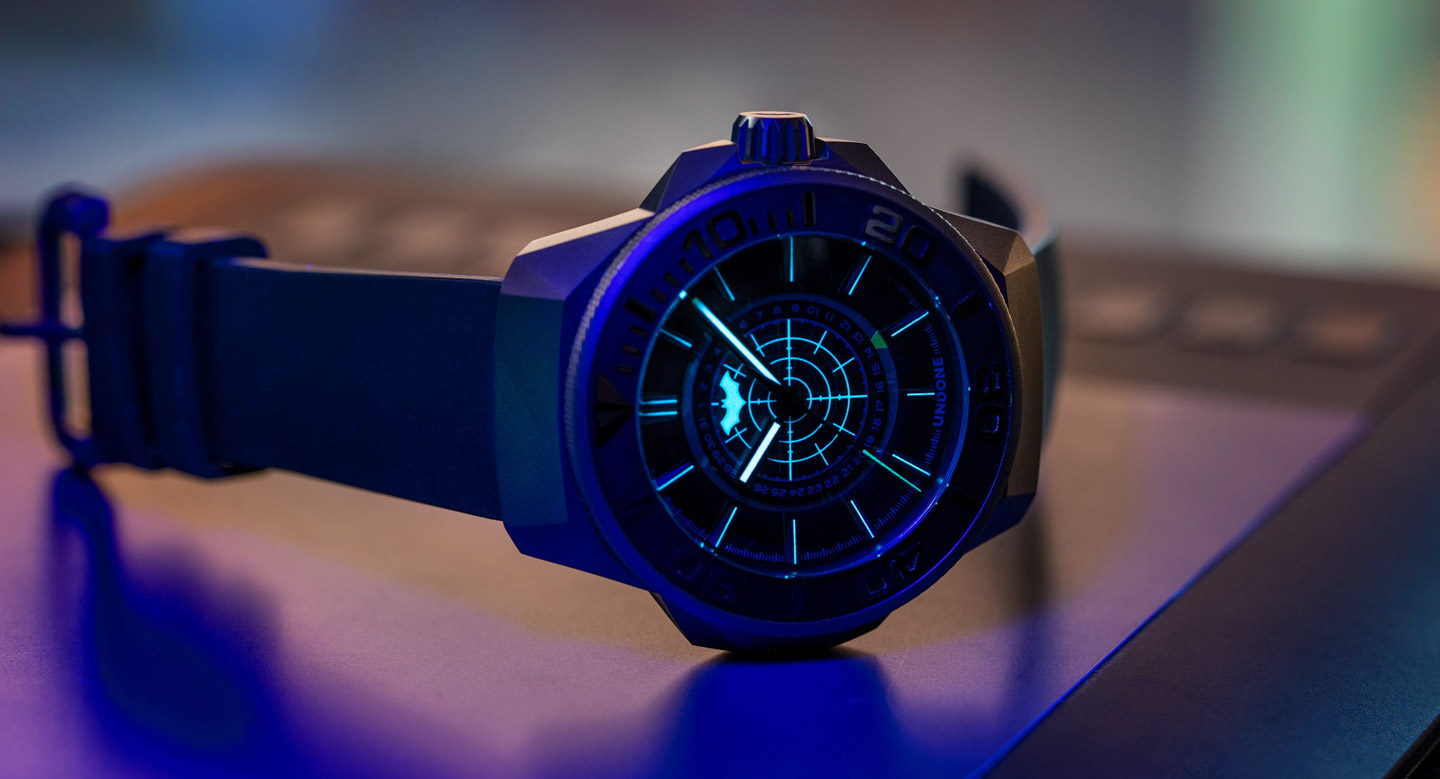 The product name itself is inspired by a piece of more contemporary tech in Batman’s arsenal – the quantum radar. In the stories, this system uses local citizens (their mobile phones that is) to create a Gotham city-wide sonar system that allows Batman to have “visuals” on any space where mobile phones are present. Batman used the quantum radar to foil the Joker on at least one major occasion – using sophistication and whit to overcome the forces of evil. Batman’s quantum radar system not only explains the name of this UNDONE timepiece but also explains the design of the watch’s inner sonar-style dial (which also happens to be semi-transparent, offering a view to the mechanical movement under the surface). UNDONE images the watch as a wrist-worn quantum radar device for the caped crusader himself – fitting elegantly with Batman’s armored black suit and Batmobiles.

Around the dial is a date indicator hand in yellow which moves from position-to-position on the dial, as opposed to the date numerals themselves moving. Such a feature is mostly unheard of in watches at this affordable level and adds a distinctly “horological touch” to this comic-themed sports diving watch. In fact, Mr. Wayne fans will recall Batman’s black and yellow color theme which was popular in parts of the late 1980s into the mid-1990s. 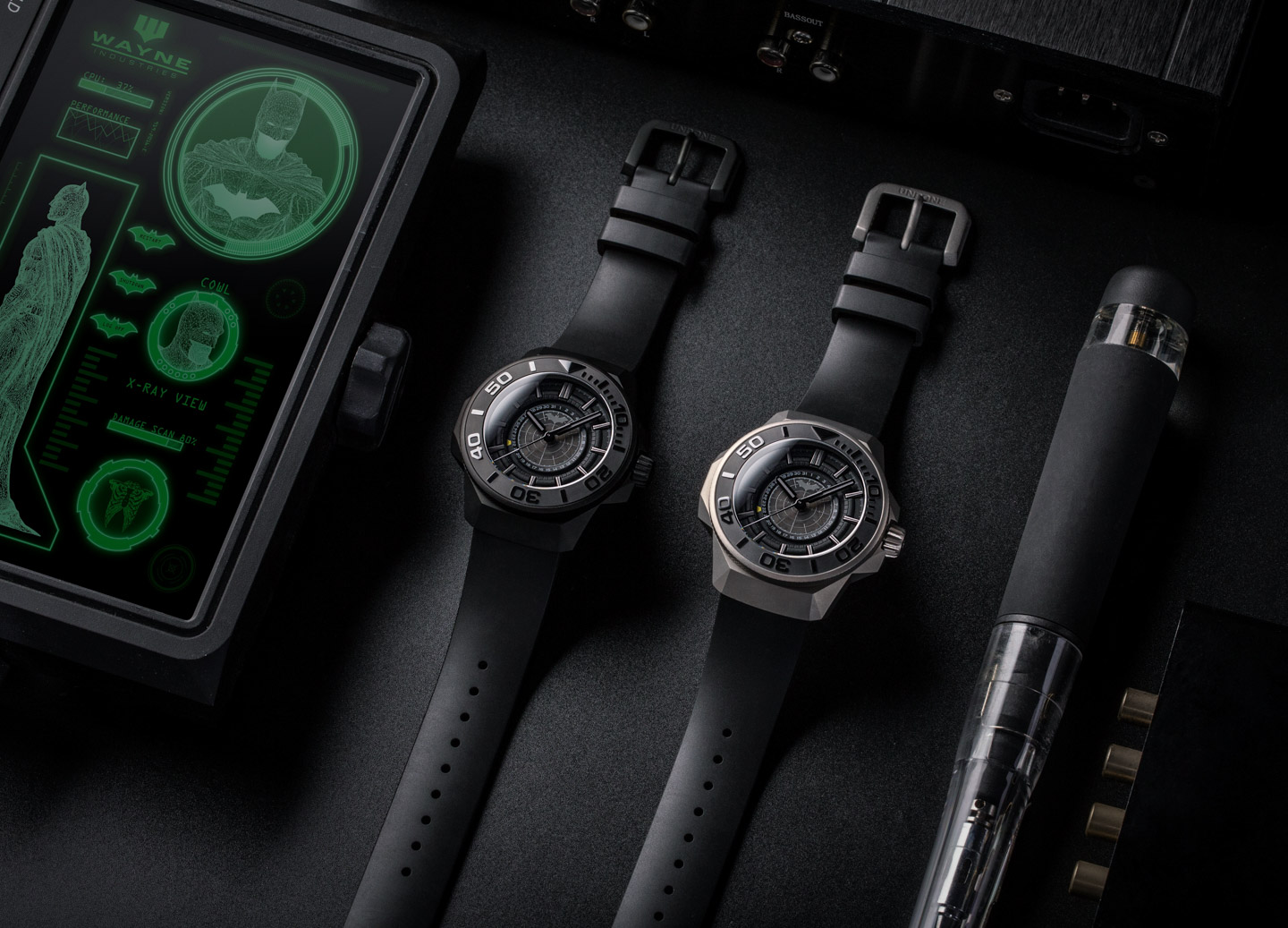 The UNDONE x Batman Quantum watch features not only a new dial but also an entirely new case design — created with attractive and muscular angles and imagined with eye-pleasing symmetry in mind. Originally based on the UNDONE Aqua diver’s watch, the UNDONE x Batman Quantum case follows the tradition of the original UNDONE Batman 80th Anniversary watches by using titanium as a construction material. The standard (non-limited) UNDONE x Batman 80th Anniversary watches are naturally finished grade II titanium, whereas the limited edition models are entirely in black, covered with a highly scratch-resistant DLC coating.

On the wrist, the UNDONE x Batman Quantum watch has a titanium bezel with a ceramic insert which is 43mm-wide, while thanks to the side flanks the lightweight titanium case is a full 47mm-wide, and 16.25mm-thick. Over the dial is a domed sapphire crystal. Inside the UNDONE x Batman Quantum watch are Japanese Seiko Instrument NH35A automatic mechanical movements that operate at 3Hz and offer approximately two days of power reserve.