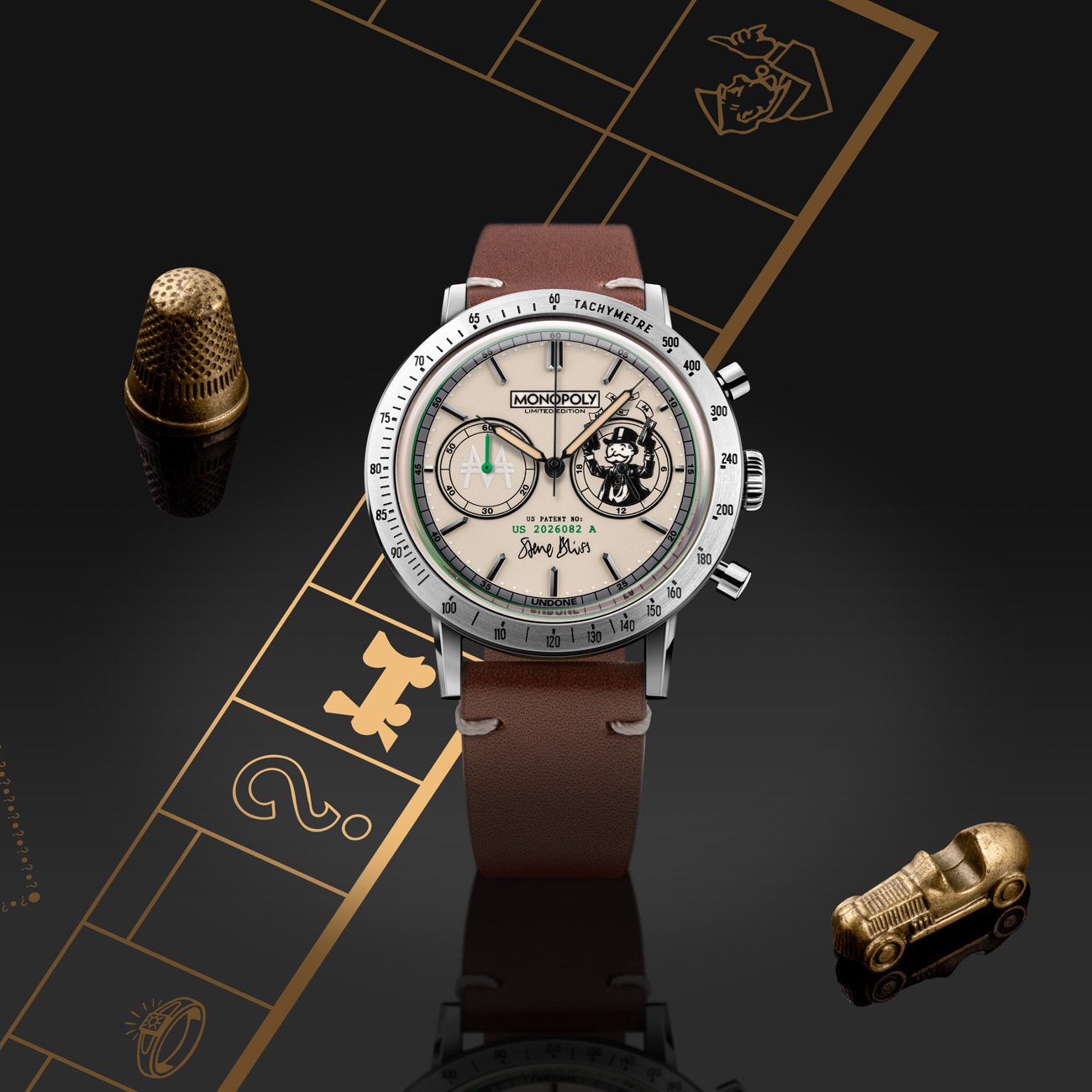 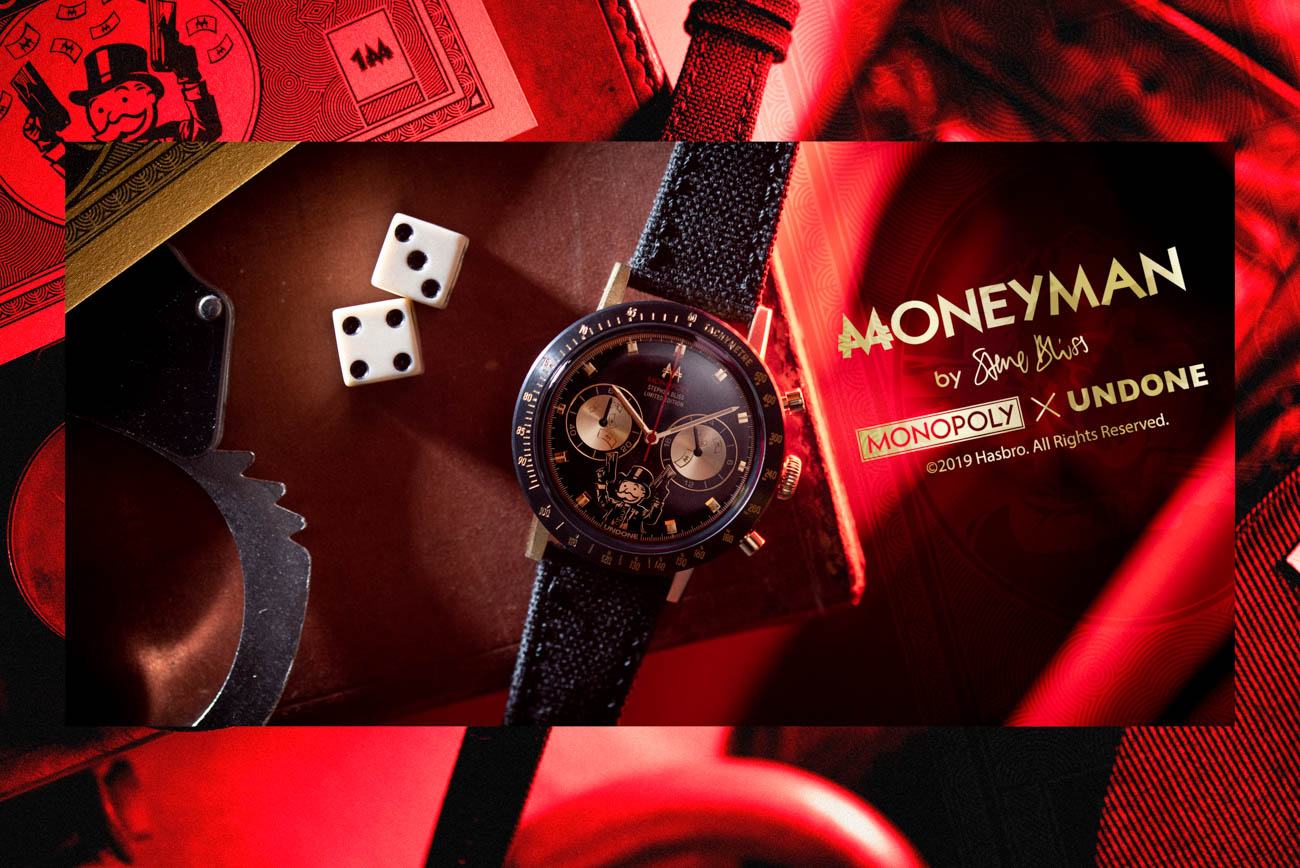 UNDONE has been marrying traditional timepiece appreciation and the popularity of urban fashion and pop culture in a uniquely satisfying way since the brand’s debut a few years ago. Popularized by affordable prices, high product quality, and a robust online-based wristwatch design customization system, UNDONE has also innovated in the area of contemporary wristwatch artistic expression. 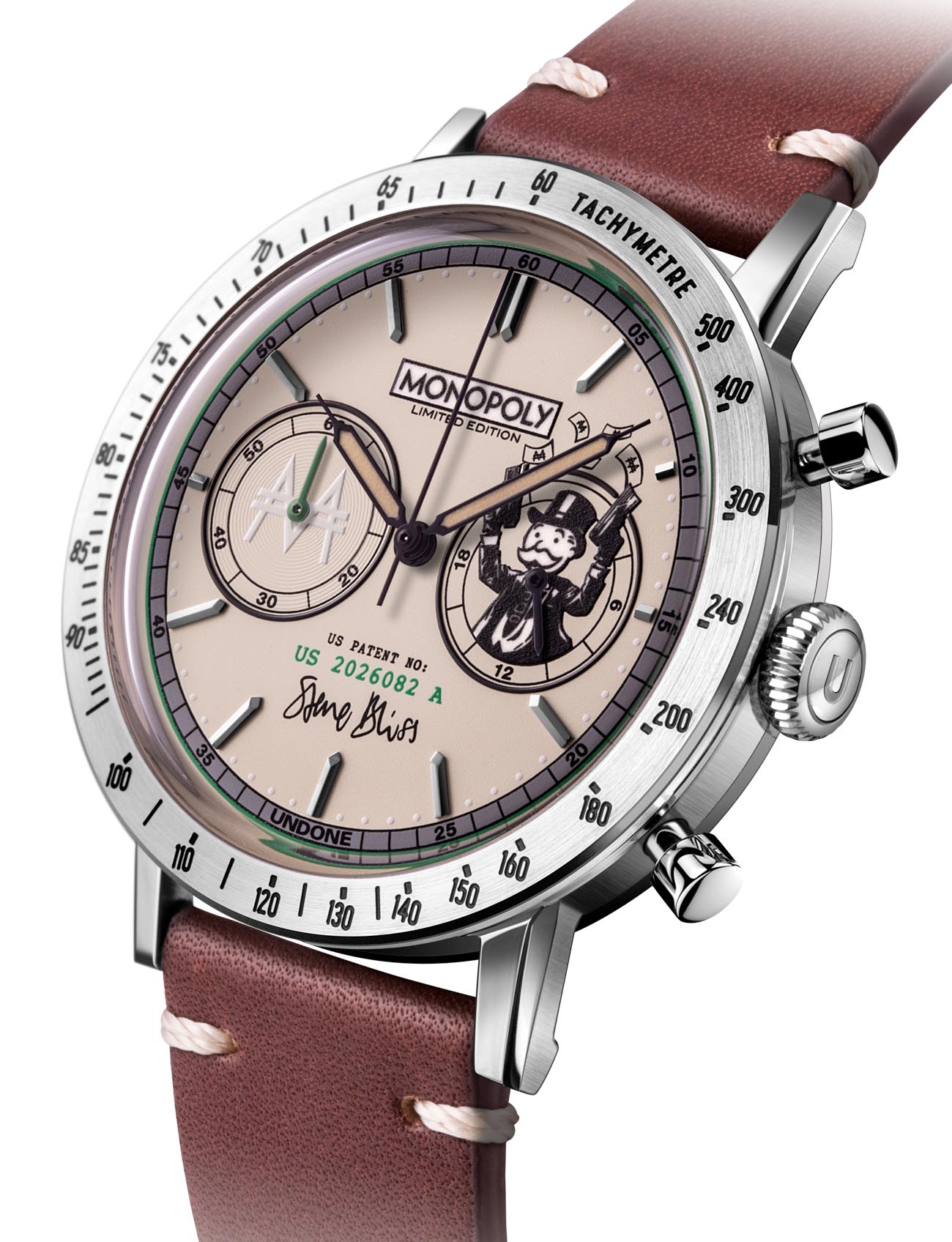 Bliss is best known for his work as a Senior Artist for Rockstar Games, where he created much of the iconic character and advertising artwork for titles such as Grand Theft Auto III and Grand Theft Auto: Vice City. The accomplished artist lends his unique style and storytelling visions to wristwatches for the first time — with a characterful collection of timepieces for UNDONE that truly celebrates the small details that timepiece aficionados most appreciate. 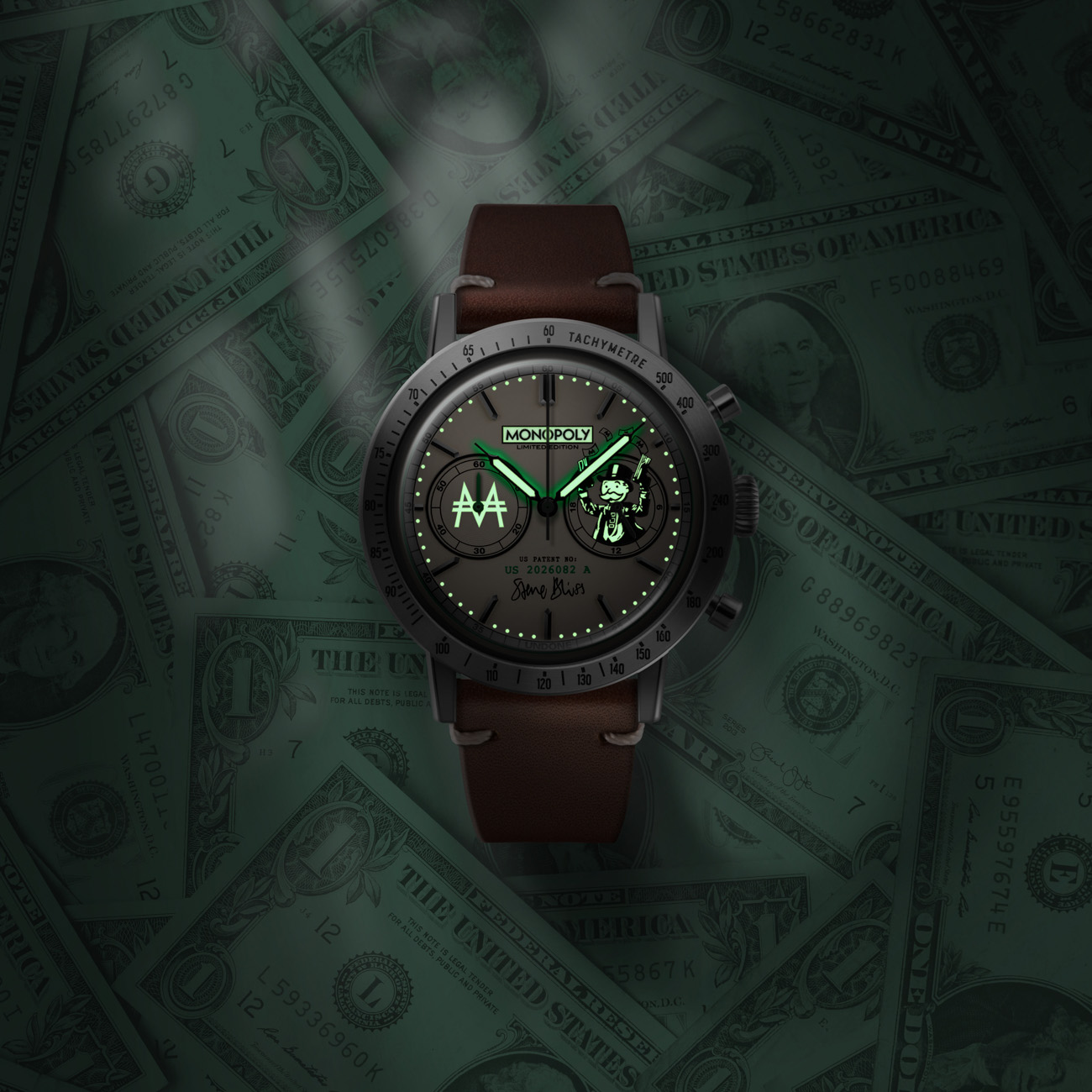 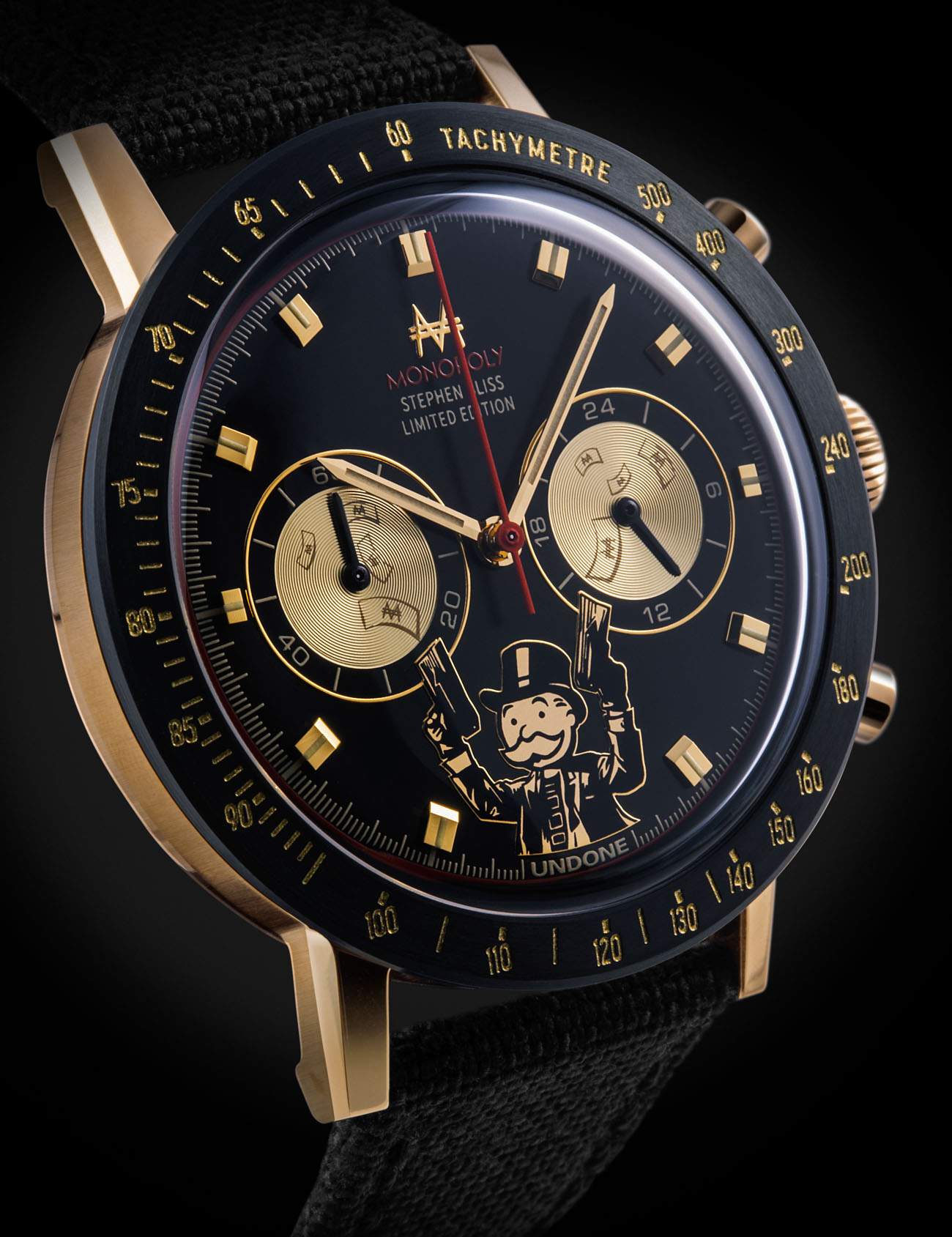 UNDONE x Monopoly Collection: MONEYMAN watches both celebrate and remark on society’s unique relationship with conspicuous displays of wealth and those that earn it. Uncle Pennybags is positioned as an avatar who represents that side of many people’s personalities that wish to flamboyantly celebrate not only their own personal wealth but currency, in general. In a world so preoccupied with money, UNDONE offers a uniquely fashionable artistic outlet to comment on society’s relationship with this phenomenon. Bliss expertly and amusingly transforms the Monopoly board game mascot into a flamboyant “rainmaker” across two entirely new timepieces designs.

Built on UNDONE’s Urban Chronograph platform the Monopoly Collection: MONEYMAN watches focus on two areas of social wealth worship, first cash currency in the United States dollar-inspired The Benjamin, and big spenders in The Godfather. Each watch has a 41.8mm-wide steel case (yellow gold and black-coated for The Godfather model), which is 13.5mm thick and contains a Japanese Seiko Instruments VK64 caliber flyback chronograph quartz movement. 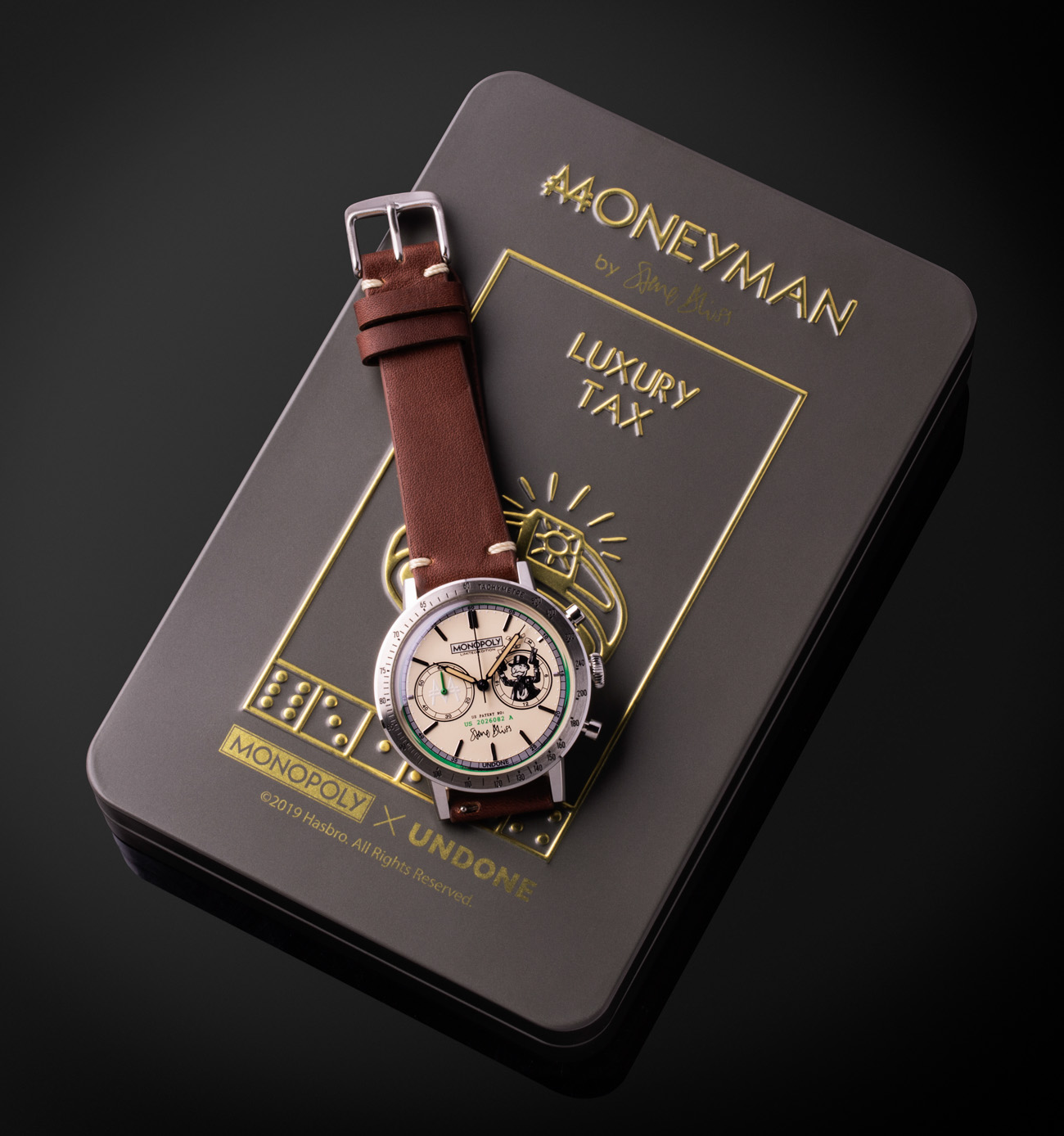 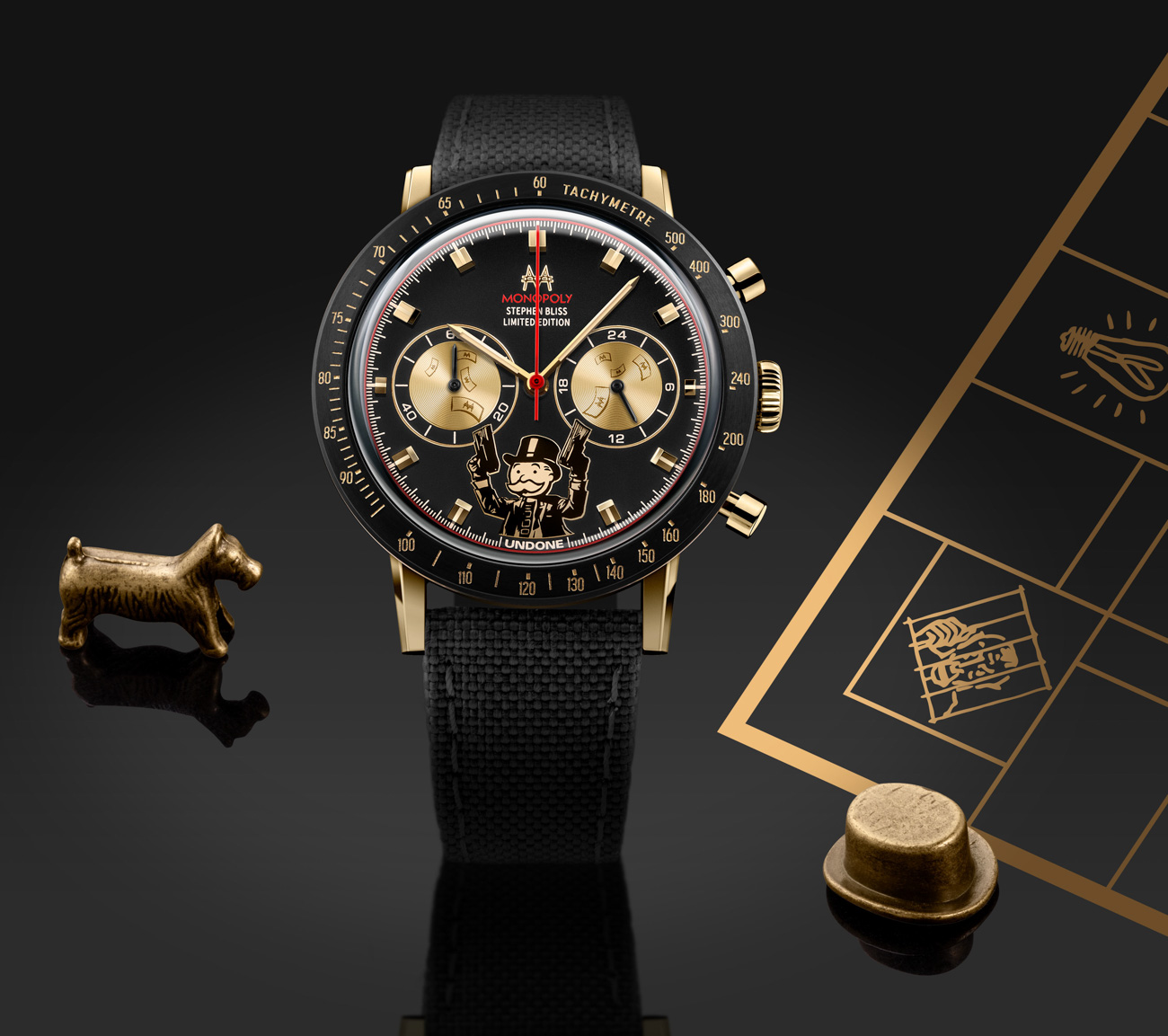 Each watch dial shares UNDONE, Monopoly, and Stephen Bliss branding, along with original artwork by Bliss. A unique feature for these limited-edition watches is the randomized caseback graphic. UNDONE and Bliss designed five different sets of caseback artwork with Bliss’ interpretation of Uncle Pennybags on each of them. UNDONE x Monopoly Collection: MONEYMAN wristwatch customers will get to enjoy the surprise of not knowing in advance which caseback their watch will be equipped with.

Let’s get to know the two UNDONE x Monopoly Collection: MONEYMAN watches better. Each will be part of a limited edition of 500 pieces. The first model is aptly known as “The Benjamin,” inspired by the United States Treasury $100 bill. Bliss skillfully created a watch dial that evokes the “United States Series 2006A” banknote, adapting key details to match the theme. For example, the “serial number” on the banknote-style dial is actually the original 1935 patent number for the Monopoly game. Rather than have the signature of the Treasury chief, the dial has Stephen Bliss’ signature. UNDONE and Bliss further expertly matched the watch dial colors to evoke United States currency in a manner previously never before done in a wristwatch. 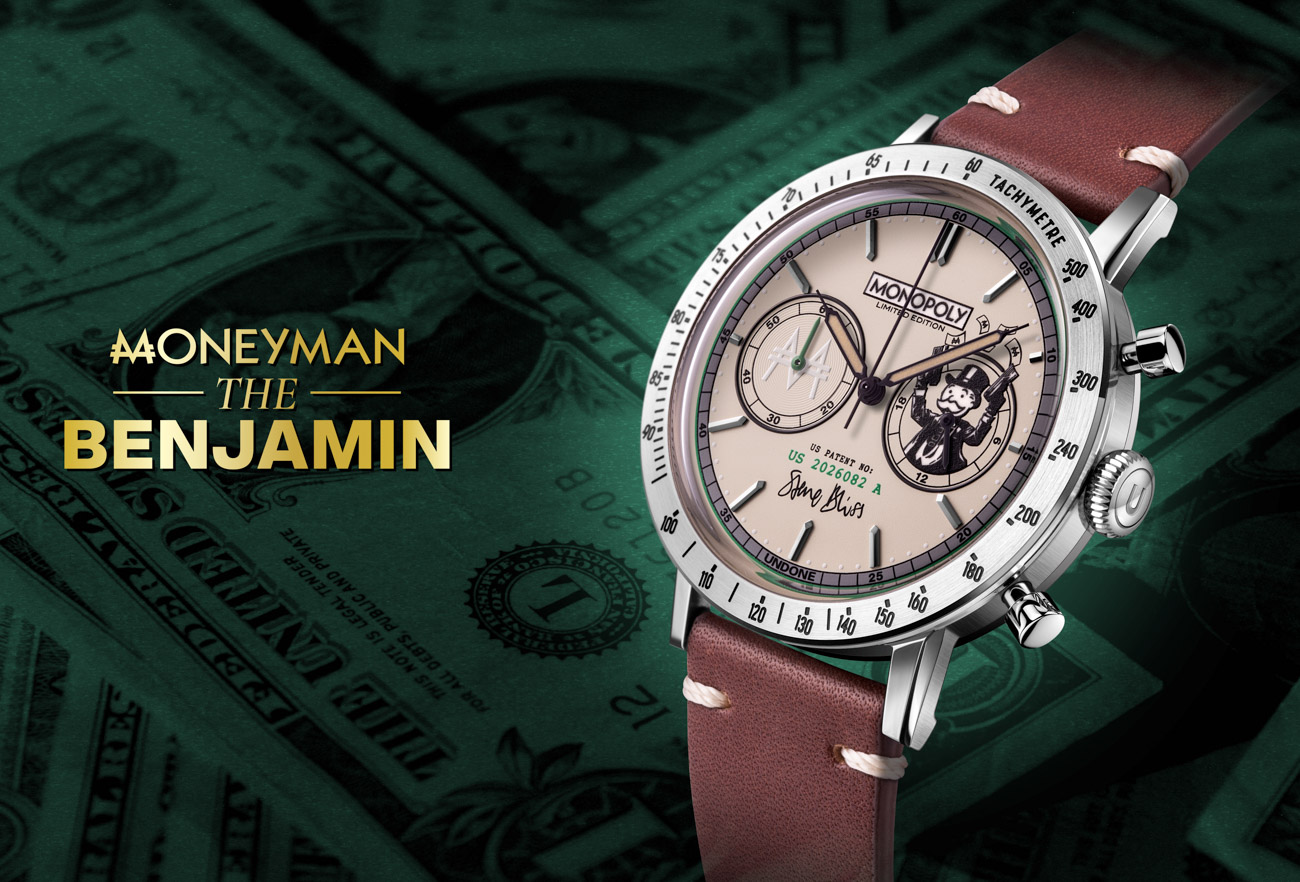 The second of the two limited-edition UNDONE x Monopoly Collection: MONEYMAN watches is The Godfather. In black, yellow-gold tone, and accents of red, The Godfather dial has Uncle Pennybags with two “cash cannons” shooting bills for a design that playfully celebrates those who earn and then spend it. Whether wearers of The Godfather are treating their friends or impressing the public, the watch directly comments on the aspiration many people have to be the big spender in their own social circles.

During the Monopoly Collection: MONEYMAN pre-sale event, consumers can enter a free giveaway (with additional opportunities to enter for those who share information about these fun new timepieces on social media) in the form of participating in a “spin-the-wheel” style gaming promotion right on the UNDONE website. Prizes include an opportunity to purchase a limited-edition (of 10) all-black version of the Monopoly watch, as well as posters, straps, and discounts on other UNDONE timepieces. The top three sharers in the promotion will all automatically get UNDONE x Monopoly Collection: MONEYMAN watches. For more information visit the UNDONE website. 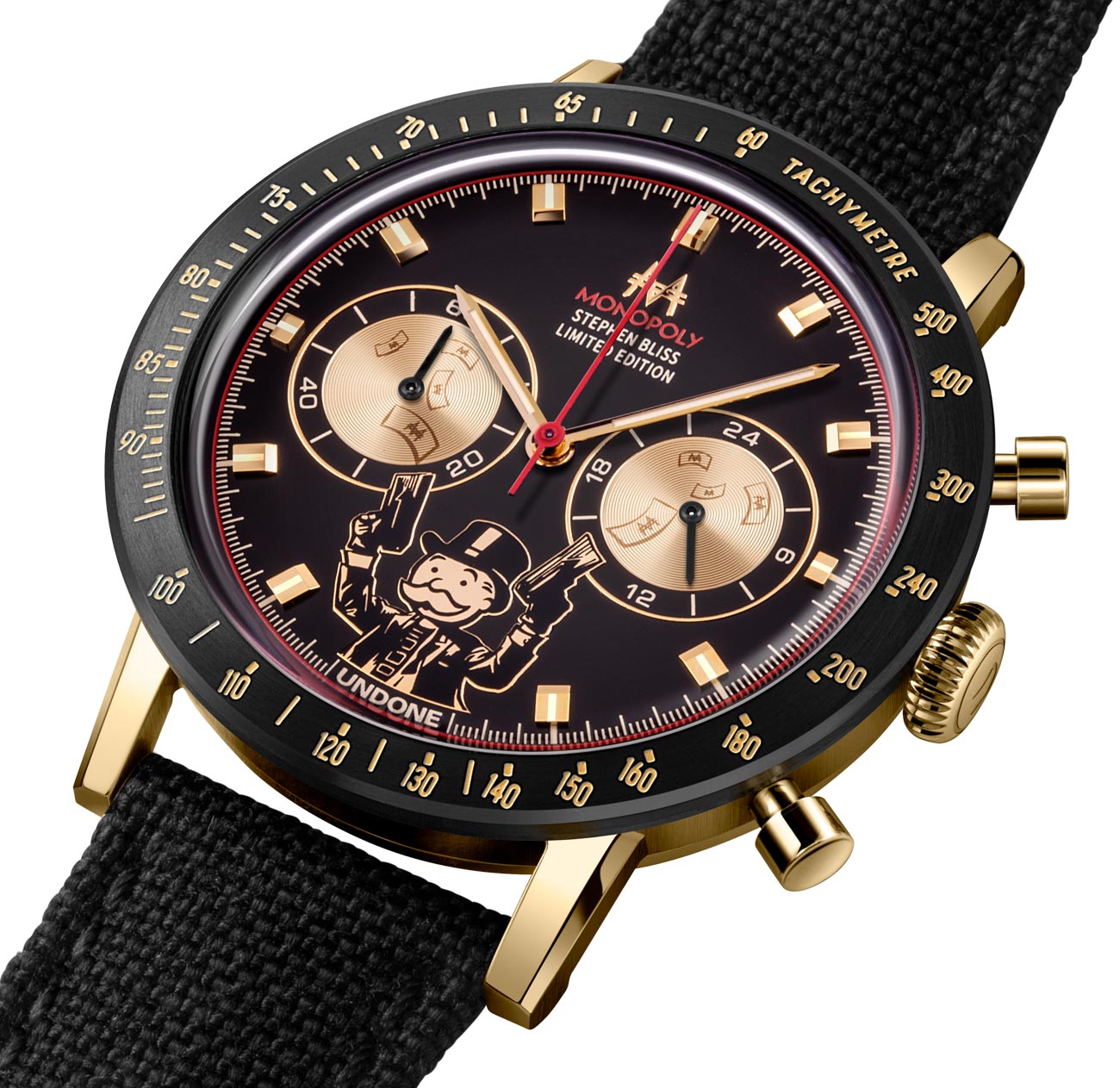 Brimming with originality and self-expression, these money-themed UNDONE timepieces don’t need to cost a lot of cash. As a limited edition of 500 pieces each, price for each of the UNDONE x Monopoly Collection: MONEYMAN The Benjamin and The Godfather designed by Stephen Bliss is $480 USD. Learn more or order via the UNDONE website here.