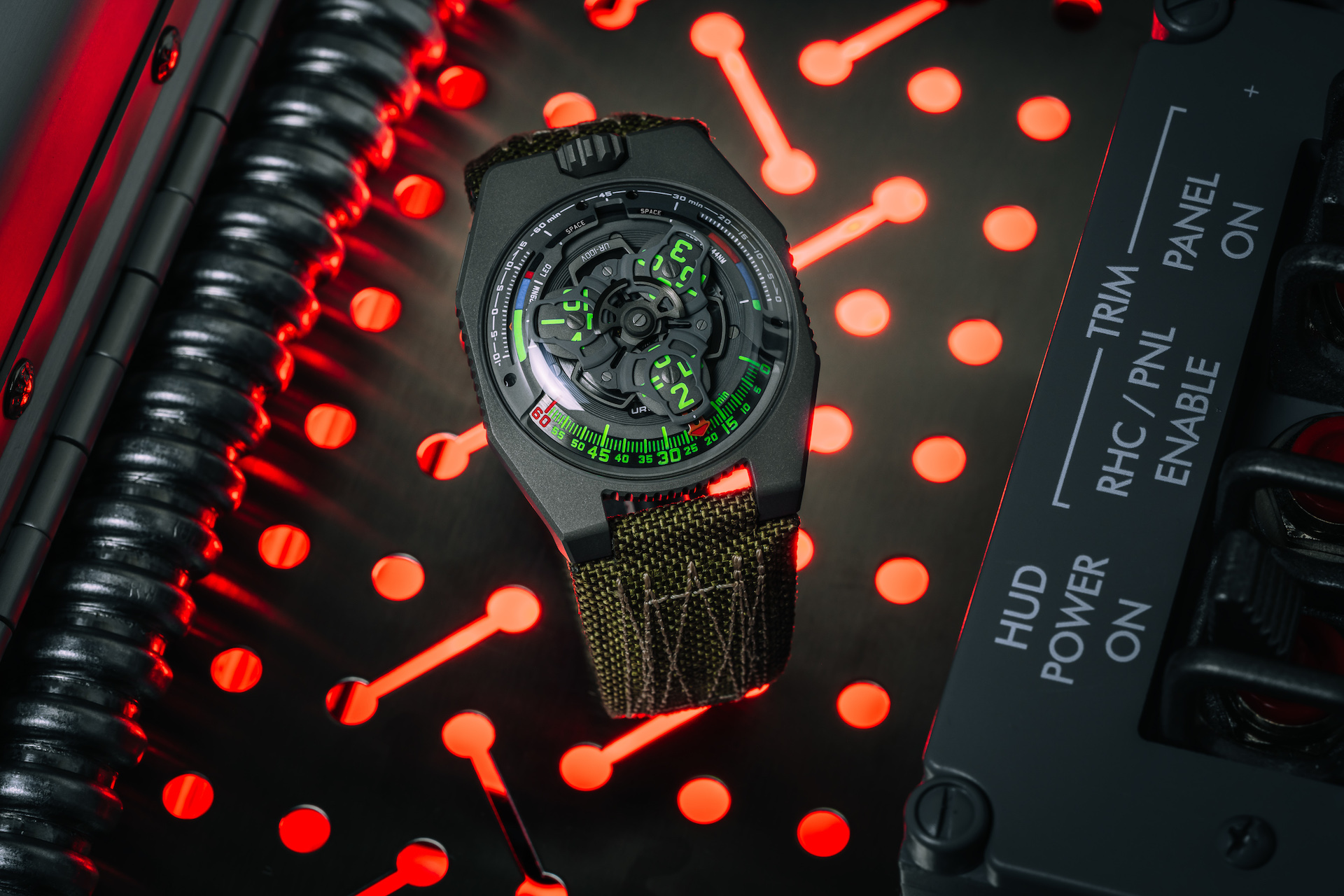 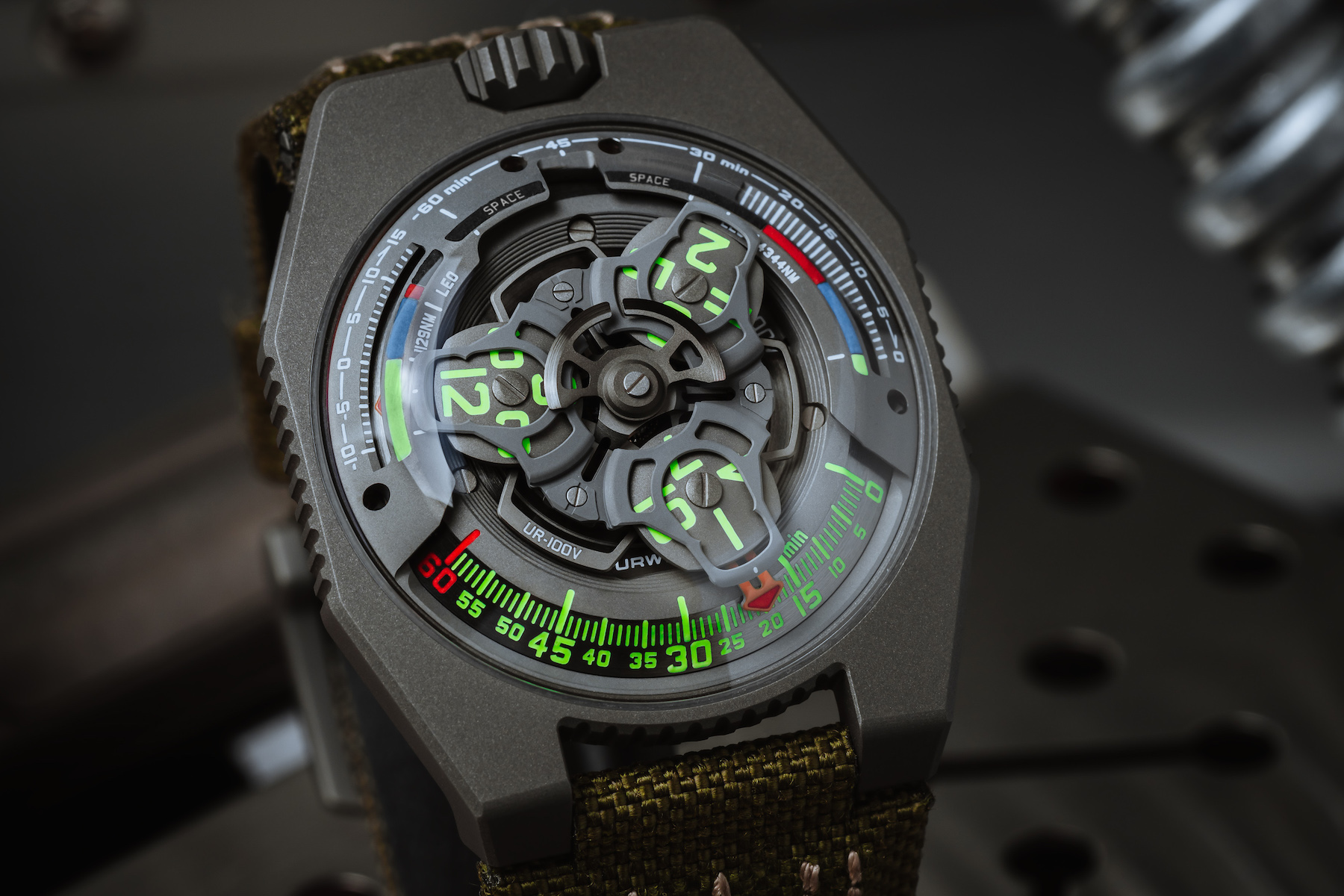 Just released is the Urwerk UR-100V P.02 in partnership with Horology Collective, as well as the Intrepid Sea, Air & Space Museum in New York. This is the second release in private collector community Horology Collective’s Portfolio series done with independent watchmakers (the first was last year’s superb J.N Shapiro Infinity Series P.01 with meteorite dial), and I think it’s an unintentional but fun coincidence that both have an outer space association. Goldsmith & Complications, the official retailer of the 20-piece limited edition UR-100V P.02, will be donating $50,000 of the proceeds to the Intrepid Museum, as well. 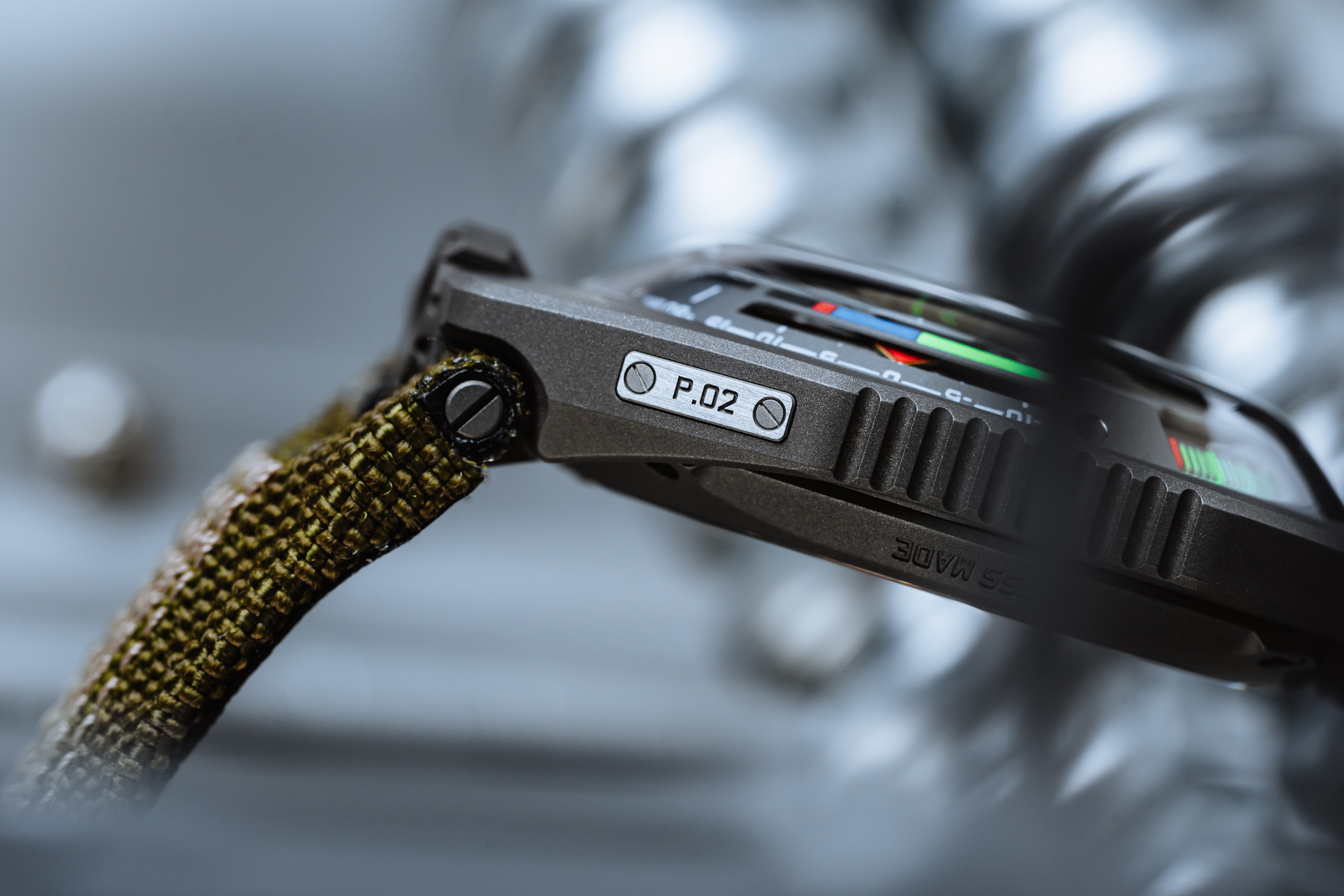 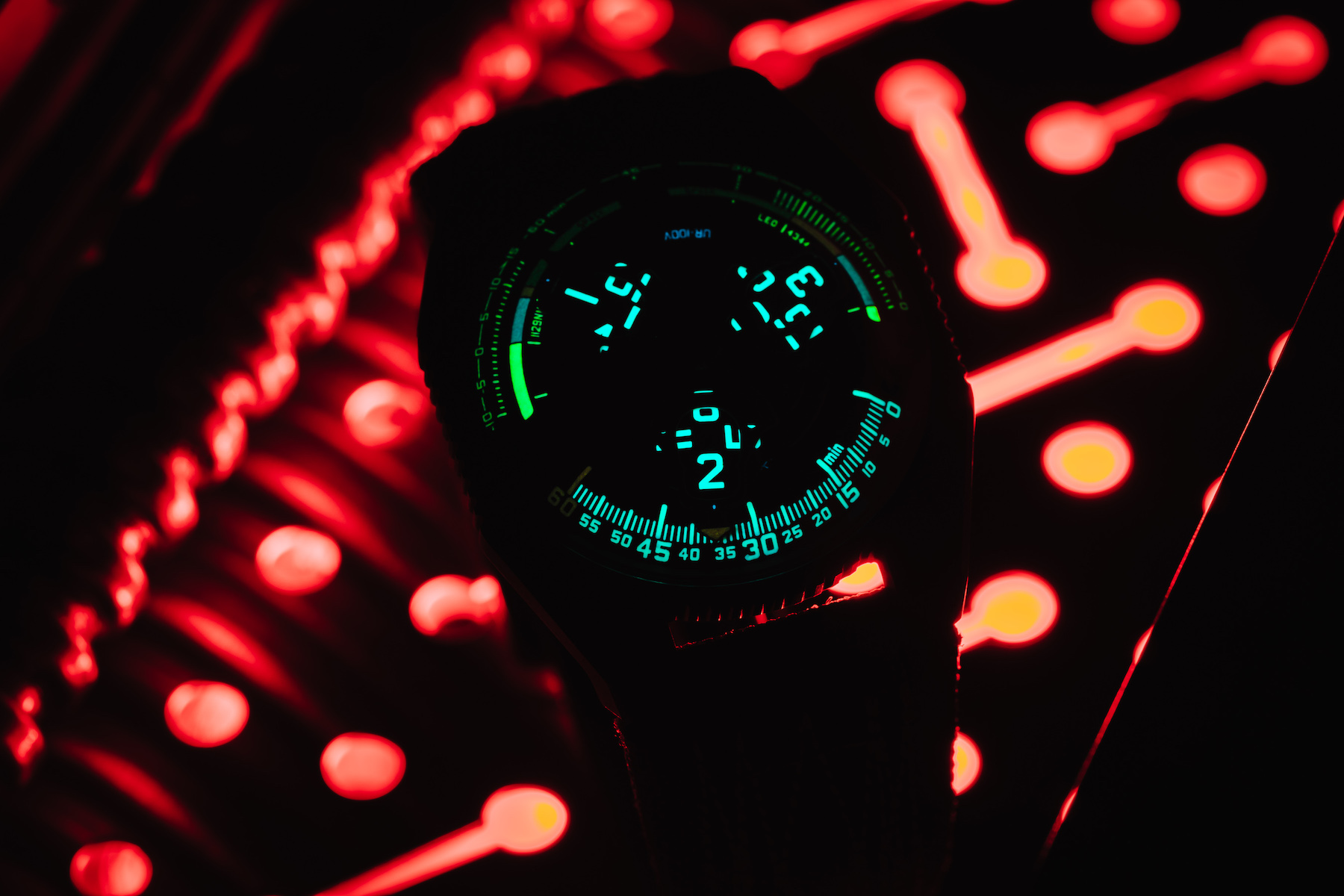 Rapkin and Reilly loved Urwerk’s UR-100 SpaceTime and imagined what the watch would look like if it were a specific tribute to the first space shuttle Enterprise (which is on display at the Intrepid Museum, naturally). The UR-100V P.02 has the Urwerk satellite time display with hours communicated via disc and minutes via rotating disc and red pointer right below the hour display. 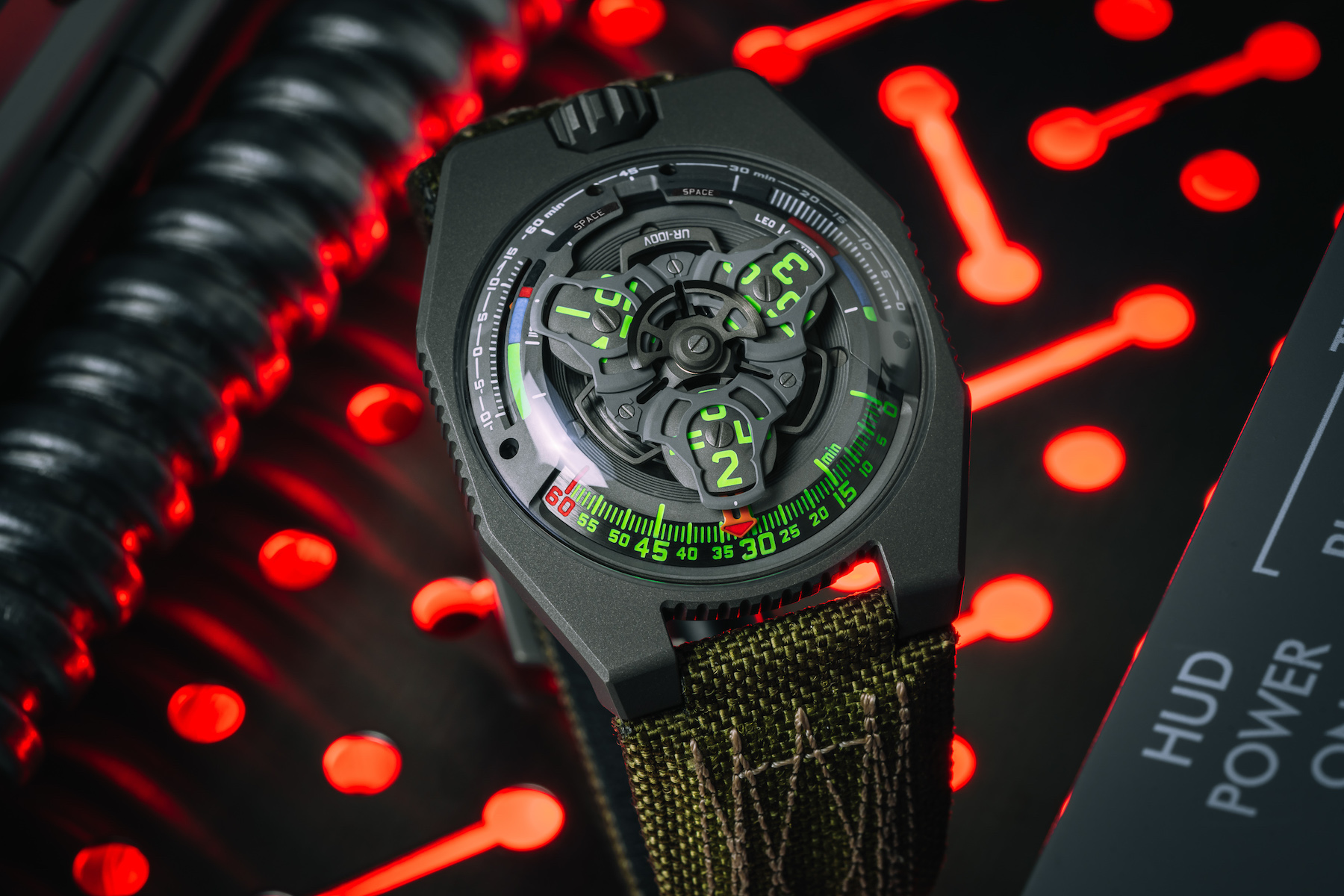 The apertures on the upper left and right sides of the case are unique here, however. On the left side of the case is the “launch aperture” that displays the three phases of the shuttle launch with green representing the shuttle on earth with ground control doing final checks and the startup of the three main engines; blue represents the solid booster ignition; and the red is for orbital altitude. 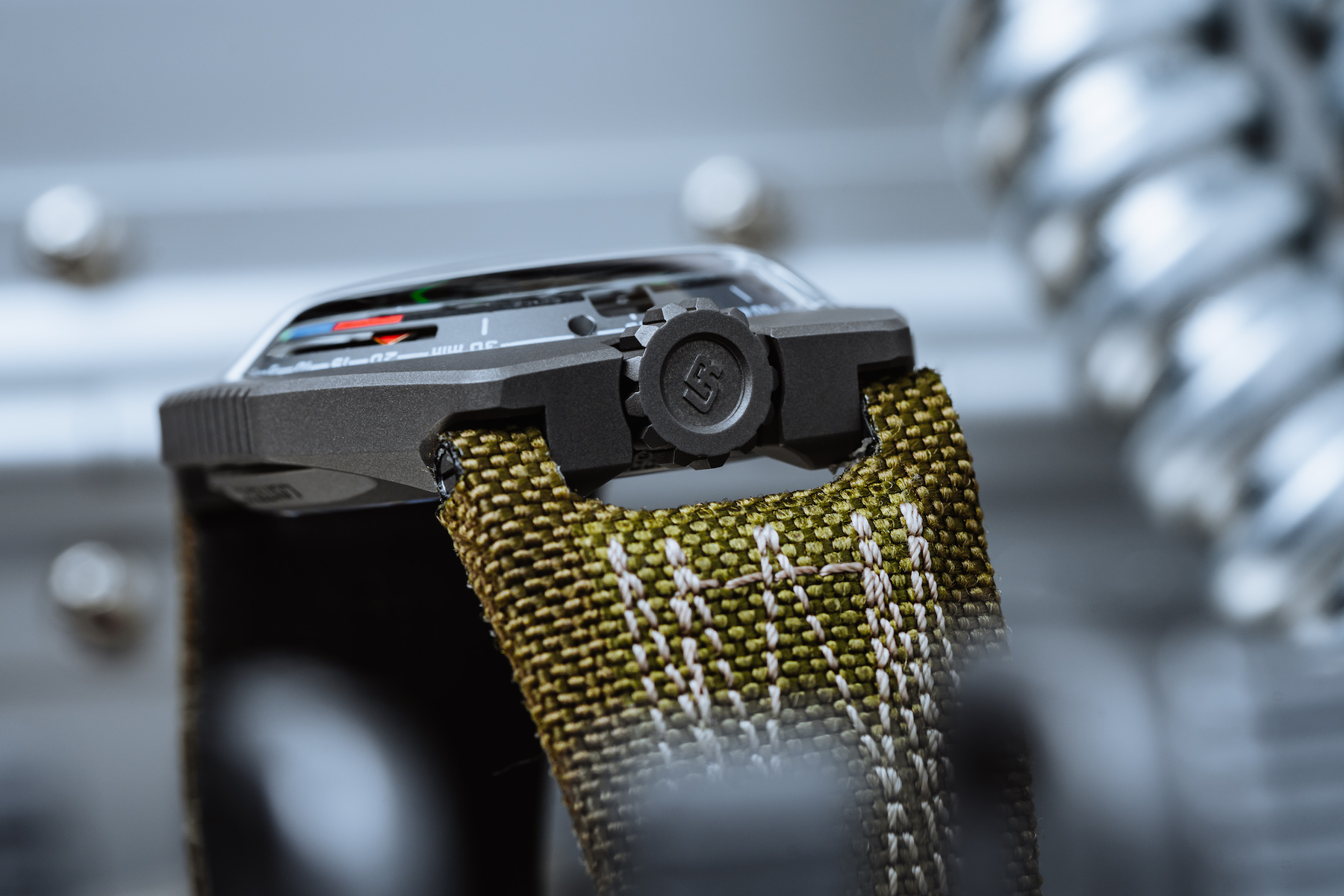 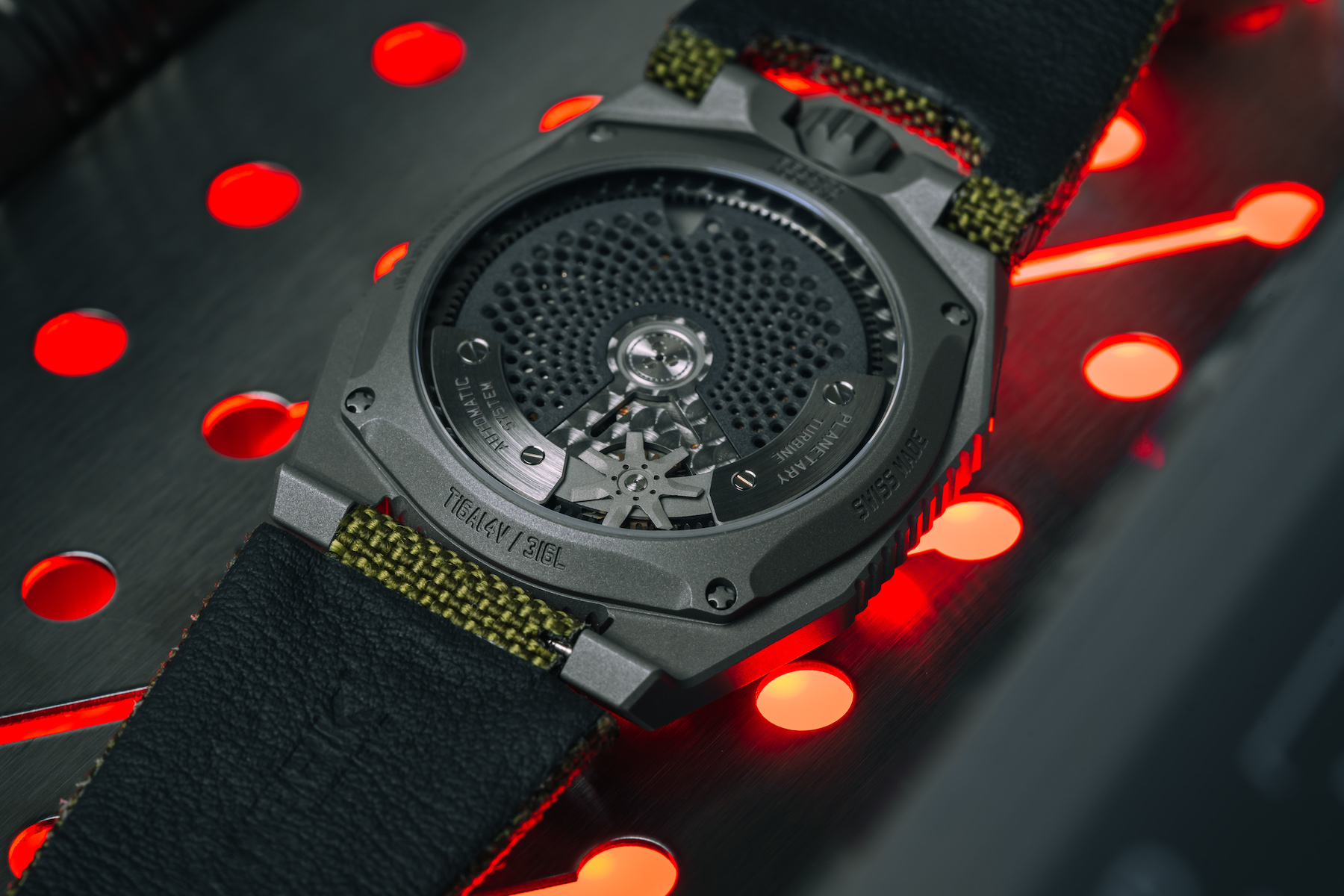 This is all done via the new calibre 12.02 that was specially made for this watch and Urwerk founder Felix Baumgartner explains, “This new movement enabled a redesign of the carousel, bringing the hours closer to the minutes as they travel in succession along the 60-minute scale. The result is an easier and more intuitive reading of the time.” The carousel and upper section of the hours display are done in anodized aluminum that is then sanded and shot-blasted. Designed to protect against excessive rotor speeds is the Windfäng rotor that’s seen on the SpaceTime, as well. The calibre 12.02 operates at 28,800 vph and has a 48-hour power reserve. 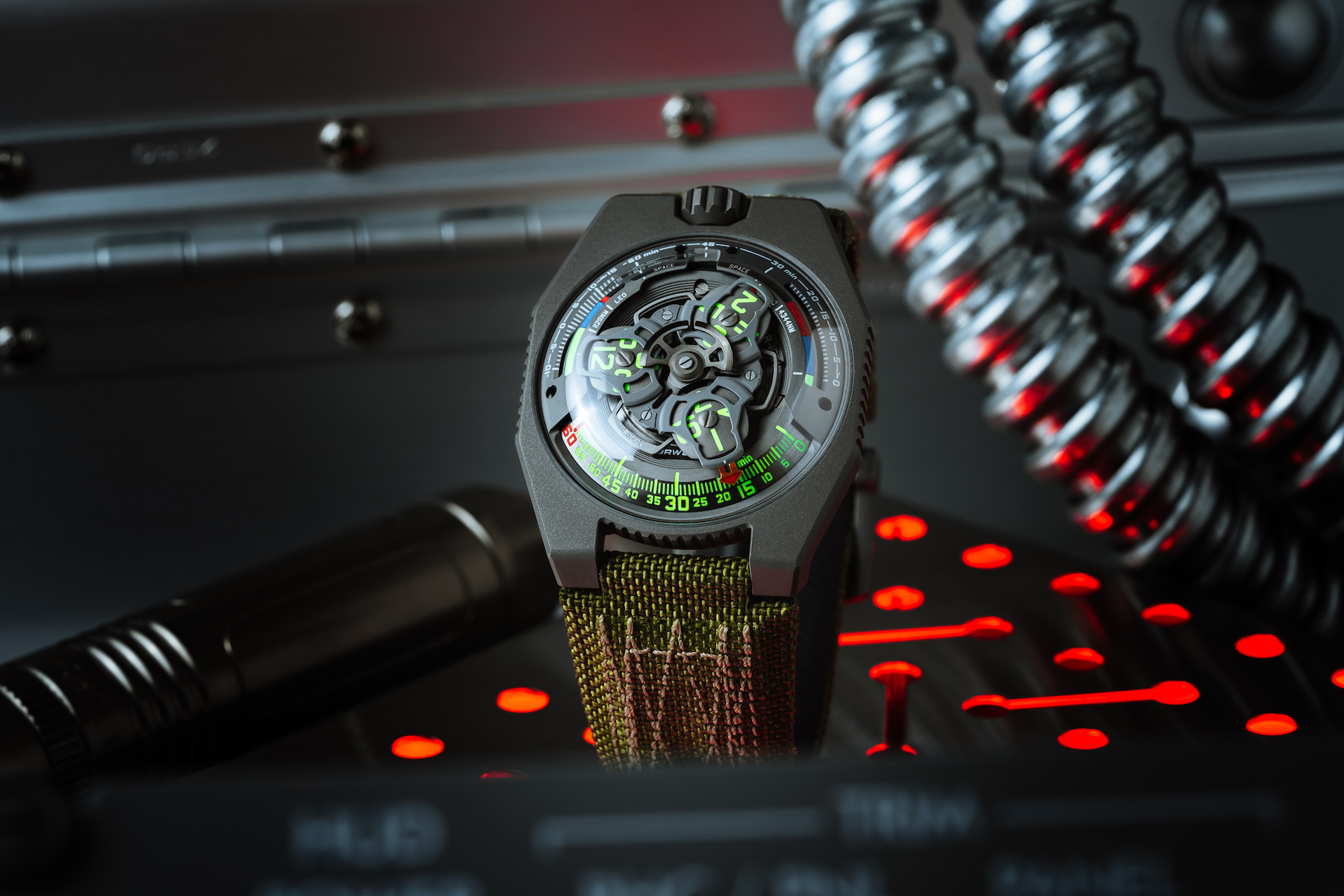 The case of the UR-100V P.02 is done in titanium and stainless steel with a Gun Metal PVD finishing. It measures 41mm-wide, 14mm-thick, and has a lug-to-lug height of 49.7mm. I had a chance to wear the UR-100 SpaceTime that has the same case measurements, and I found it to be impressively wearable with the unique case shape and design making no concessions for comfort.

The Urwerk UR-100V P.02 for Collective Horology is limited to 20 pieces with a price of $62,500. You can learn more at urwerk.com and collectivehorology.com