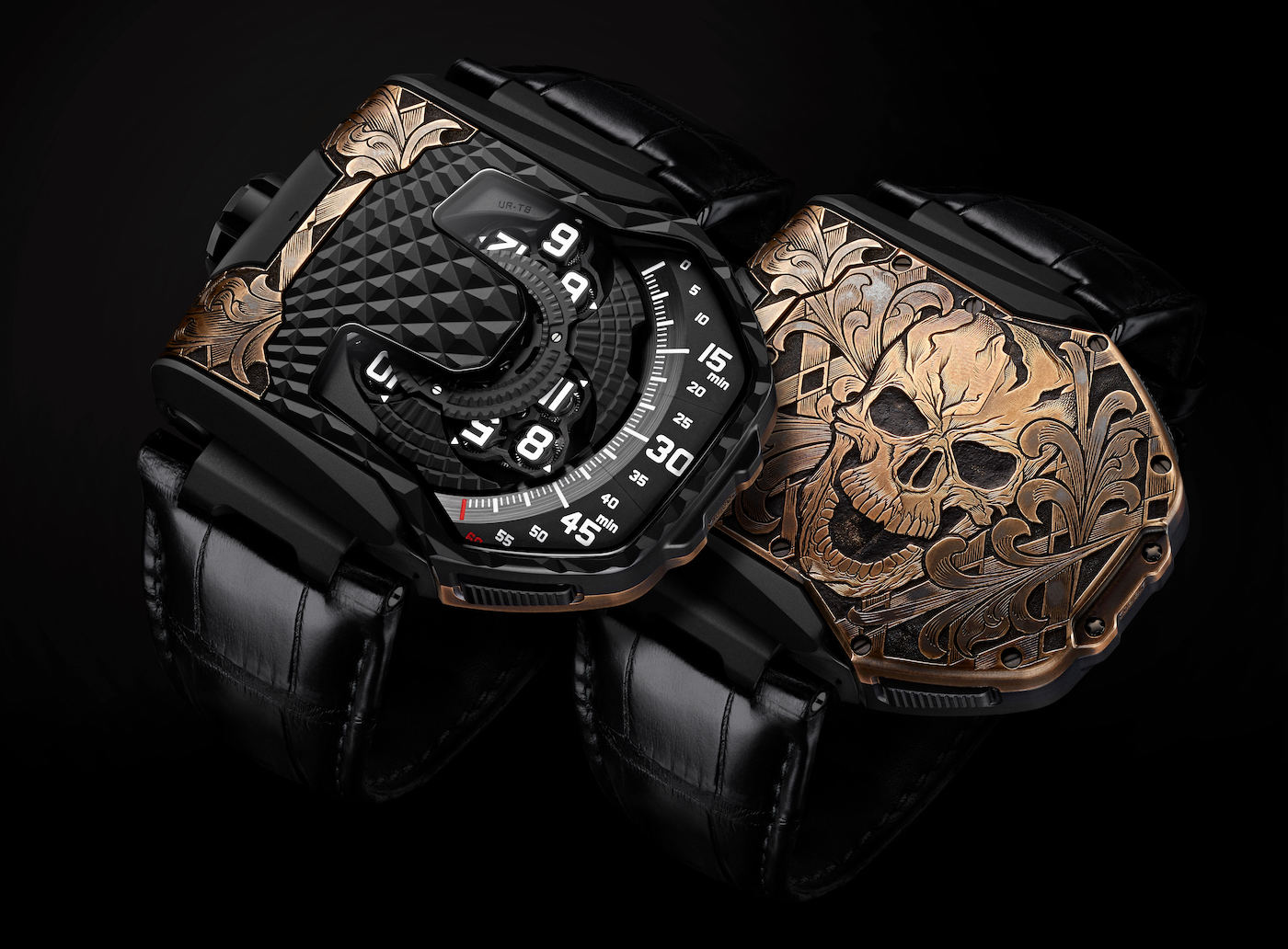 The Urwerk UR-T8 Skull watch is tailor-made to divide opinion. As a brand, Urwerk can often garner a split reaction due to the incredibly unusual way it presents the time. Although the technology used in these movements has been a staple of the brand for quite some time (and we’ve seen many, many go-arounds of how it can be implemented and dressed up), it still seems to rub some people the wrong way. I’ll admit that the first time I looked at this style of display, I struggled to read the time. But it quickly became as intuitive as a regular handset and, once that was the case, was far more enjoyable to read. 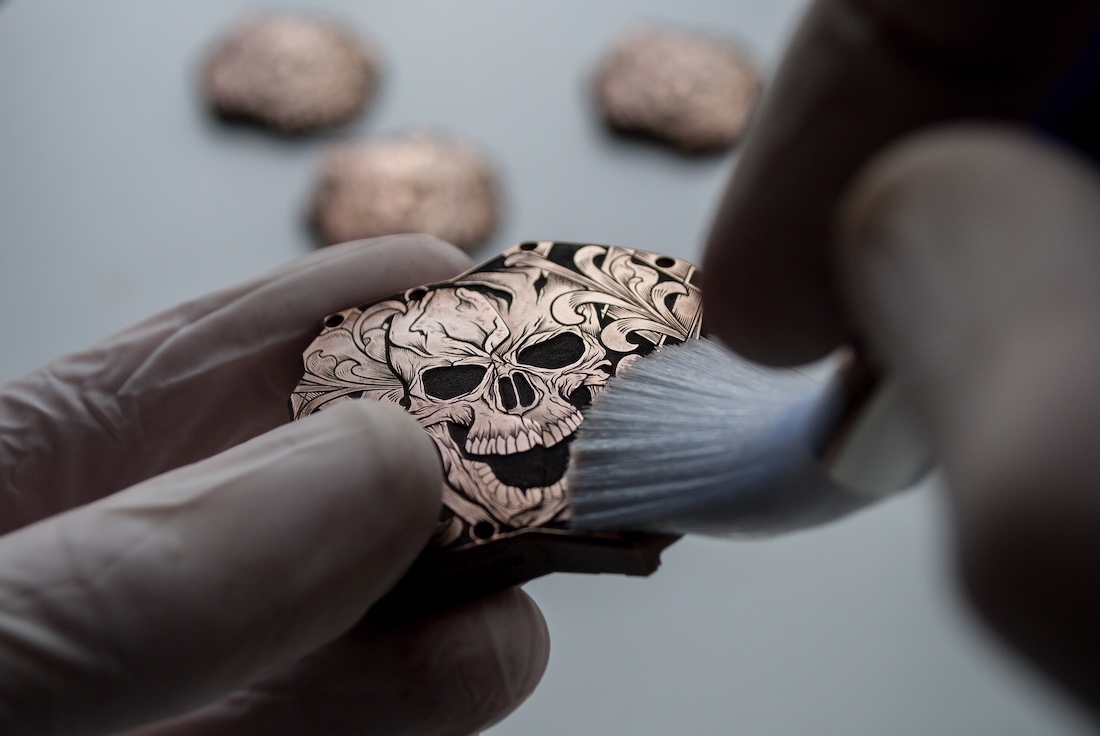 This model has been released as part of a new line of three Urwerk UR models. Along with the Urwerk UR-T8 Colibri, and the UR-111c Cobra, the Urwerk UR-T8 Skull rounds out a range that celebrates the fusion of technology, design, and artisanship this disruptive manufacturer has become known for. 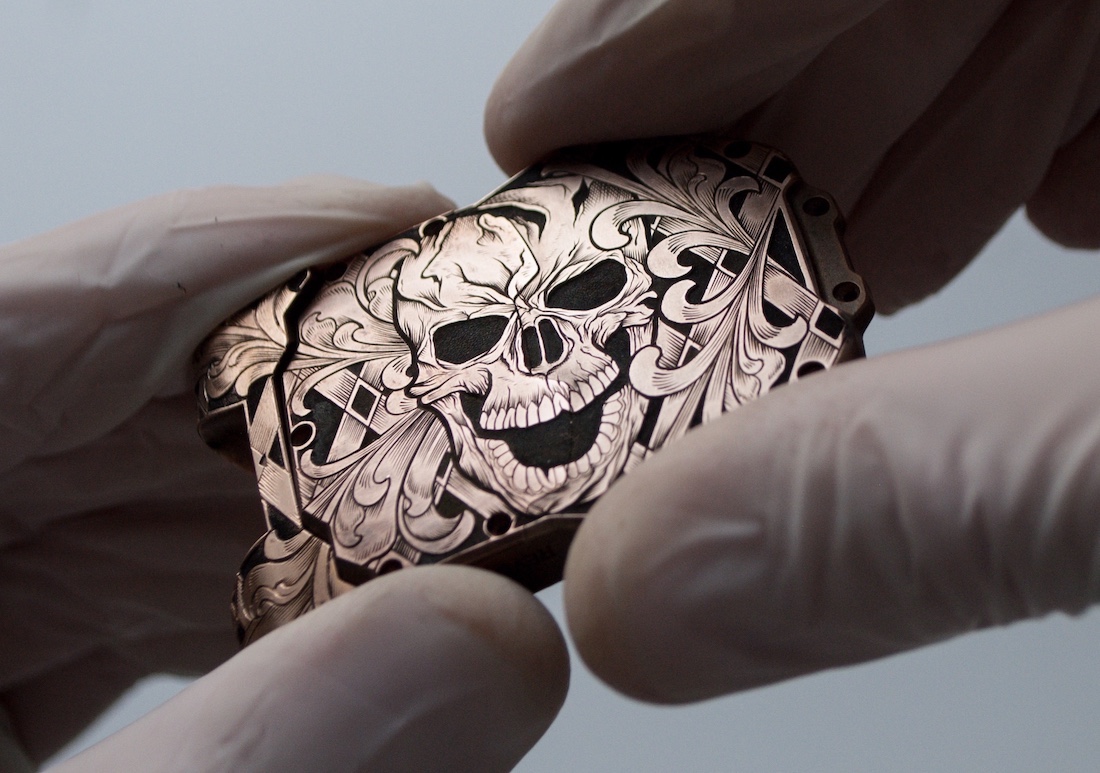 It is easy to become distracted by the time-telling mechanism, as three clusters of four “hour markers” dance around a central axis, flipping in and out of action as each hour passes. Once you’ve got your head around it, though, it’s not only super-legible, but it’s also pretty easy to envisage how what initially appears to be a highly complex mechanism is actually functioning. There’s a certain pleasure to be taken in the genuine understanding of how something apparently complicated is working. Such a realization helps deepen the respect for the designers, who were able to present something engaging without sliding too far into the self-indulgent and unusable realm. 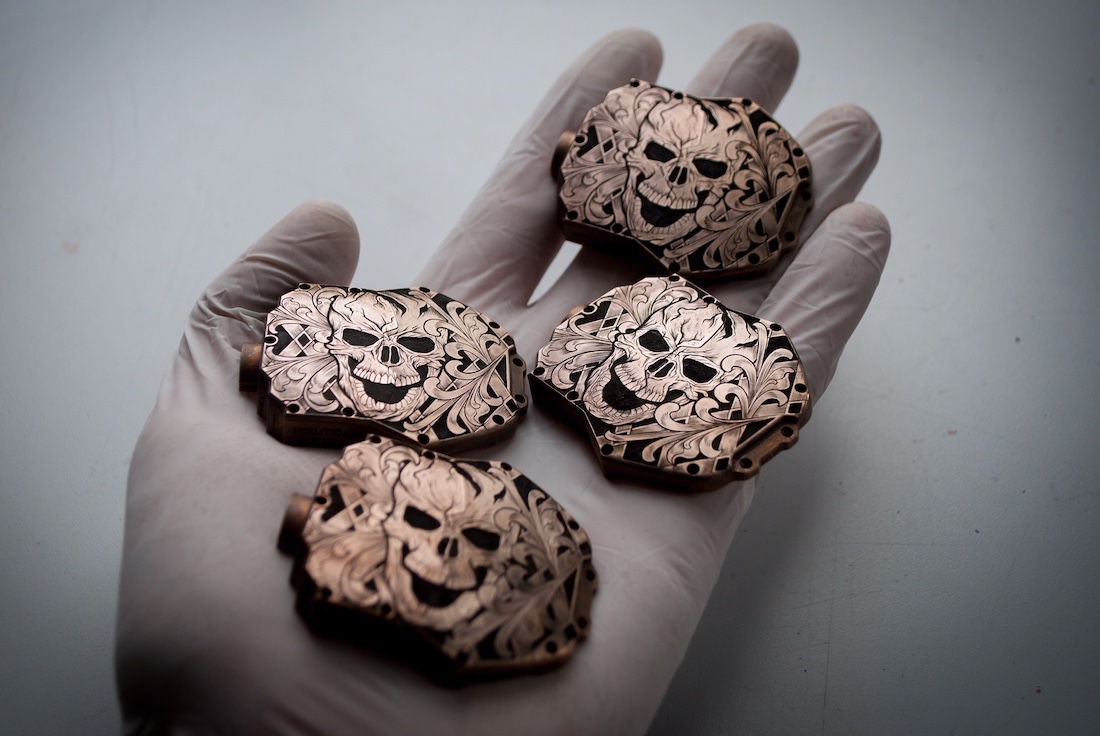 The Urwerk UR-T8 is powered by the caliber UR-8.01, a mechanical movement with automatic winding, an operating speed of 28,800vph, a power reserve of 50 hours and a uni-directional winding rotor. A variety of surface finishes are used on the movement, including surface matting and circular graining. 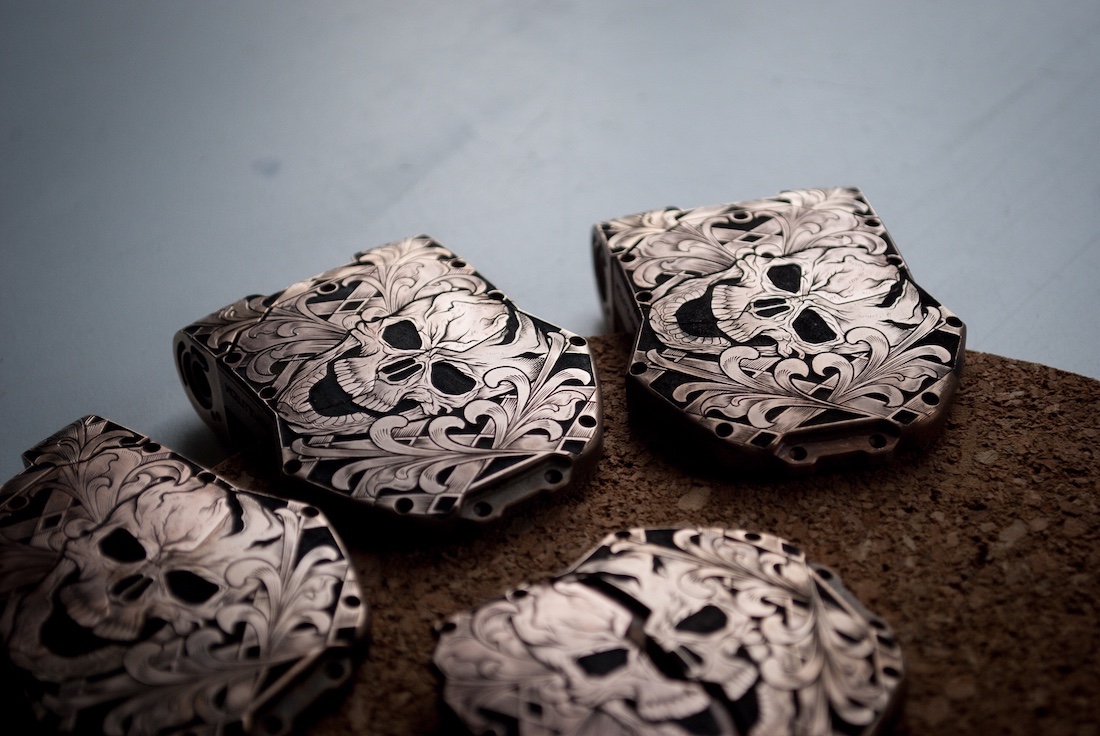 What’s really exciting about this model, though, is the expertly engraved housing. Created by Johnny Dowell (a.k.a “King Nerd”), a bronze “sheath” decorated with floral scrollwork enveloping an open-mouthed skull gives this iteration of the UR-T8 a skin of its own. The flip-over case (which allows for the case middle to be easily rotated to hide or the reveal the time-side so the craftsmanship of the skull can be easily appreciated) is made from grade 5 titanium so wears lightly on the wrist. The dimensions are 48.35mm × 60.23mm × 20.02mm, and, while large, is actually quite ergonomic in the way sits. The anti-reflective sapphire crystal is specially shaped to protect the display and offers 30 meters of water resistance. 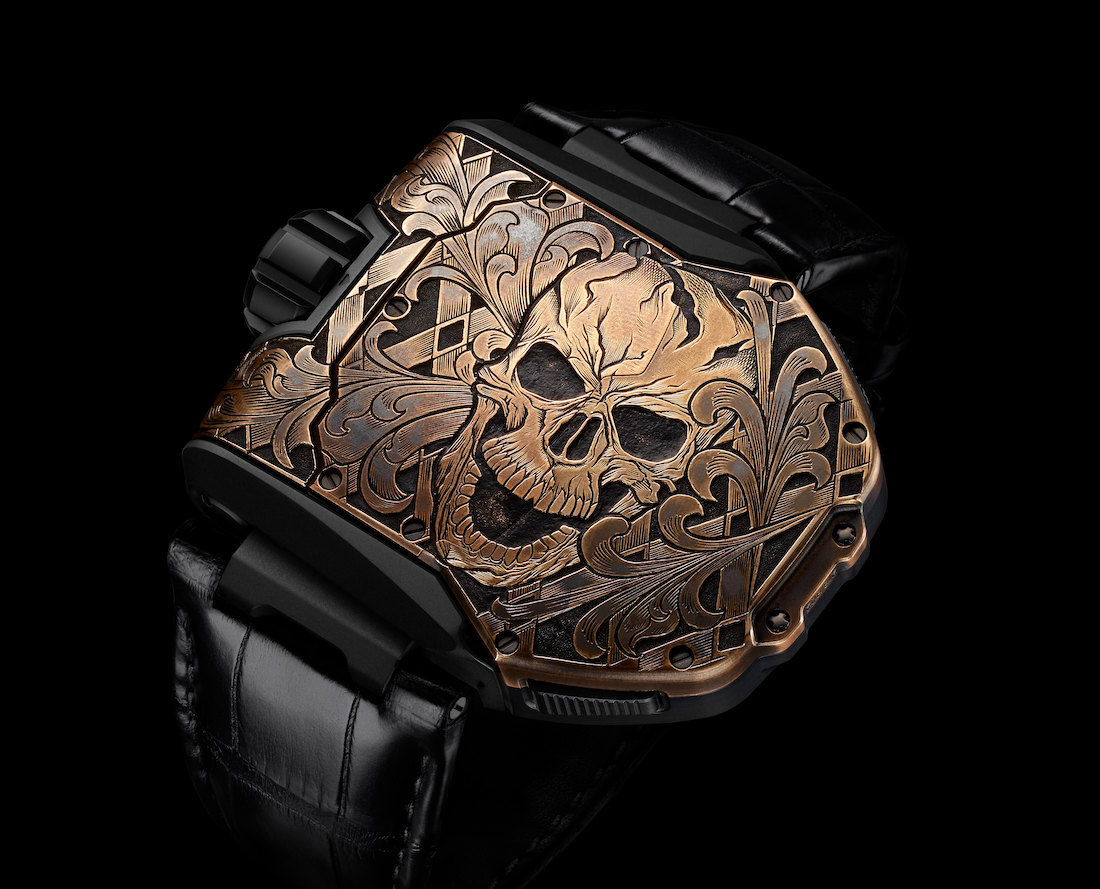 In my opinion, Urwerk has really aced it with the UR-T8 Skull. The motif will divide opinion, as some will find images of death disturbing or tasteless, while others see them as the ultimate expression of mortality and, therefore, something to be celebrated. I fall into the latter camp, and love not only the imagery and its execution, but also the steampunk colorway that suits this style of watch down to a T. If I had one criticism, it would be that the numbers on the dial, while impressively legible, perhaps let the colorway down a little. The white on black is a little too stark sitting next to such a warm bronze. That said, this would not dissuade me from wearing one of the five pieces being made if only I could afford the CHF 144,000 (before taxes) necessary to add one of these to my collection. Learn more at urwerk.com.