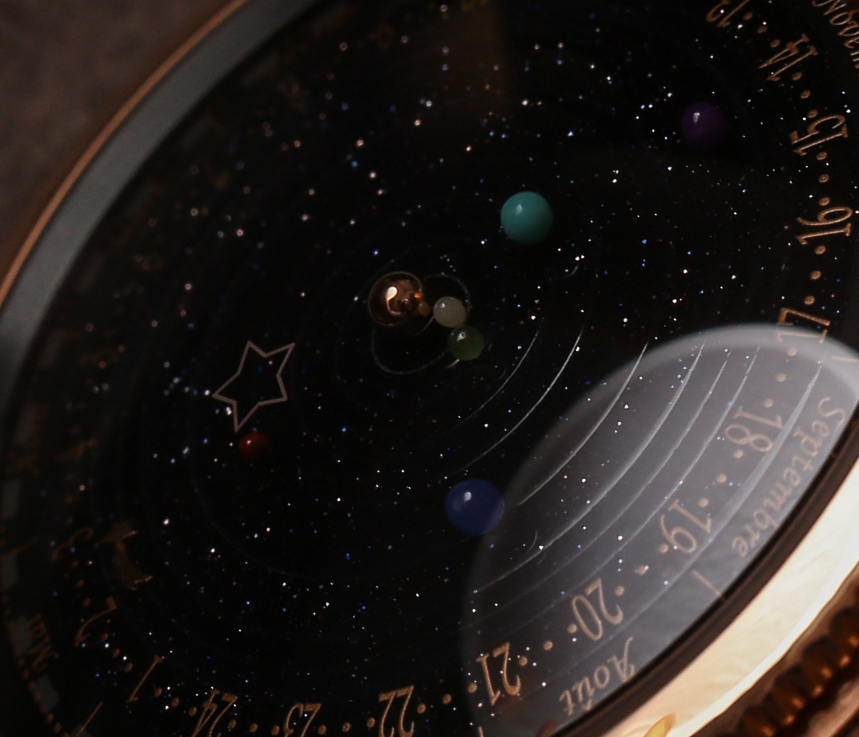 Van Cleef & Arpels is not a watch brand we normally associate with men’s watches. That isn’t to say that the Paris “maison” doesn’t cater to males, but rather that the luxury maker’s offerings for women are so strong they overshadow the pieces for men. It is also a fact that Paris-based watch makers who specialize in jewelry tend to be known more for their ability to execute items with perfect elegance versus macho masculine accoutrements. With that said Van Cleef & Arpels certainly does produce men’s watches and a new one for 2014 is among the most interesting we have seen in quite a while. Called the Midnight Planetarium Poetic Complication, the astronomically-themed watch is a welcome departure from the norm and is a  beautiful new high-end piece for traditionally complicated timepiece lovers.

The Midnight Planetarium Poetic Complication is a very difficult watch to understand both thematically and technically for those who aren’t familiar with some of the key players in the watch industry. This is a product not born in a vacuum but rather inspired by the recent history of Van Cleef & Arpels as well being based on the talents of some key watch industry minds. Van Cleef & Arpels has another astronomically themed watch with a star chart which is more than likely still in the brand’s collection known as the Midnight in Paris. Highly complex, I believe it is the product of the brand’s ongoing relationship with designer Jean-Marc Wiederrecht. It is very easy to consider the Midnight in Paris as having inspired a follow-up astronomical watch with the much more complicated Midnight Planetarium – though Jean-Marc Wiederrecht did not have anything to do with it. Rather, Van Cleef & Arpels turned to a very unlikely source for the Midnight Planetarium movement system that as far as we know they haven’t worked with before. That would be the workshop of Dutch-based boutique watchmaker Christiaan van der Klaauw, who for watch lovers, is amongst the few characters in the industry known for producing planetarium style watches. The Midnight Planetarium is a sort of collaboration piece that includes an exclusive Christiaan van der Klaauw designed planetarium module over a base automatic mechanical movement. The watch also features a perpetual calendar on the rear of the watch with indicators for the day/night/and year.

It is an amazingly thorough design that retains an ability to become elegant despite everything going on with the display. Even though miniature planetarium watches tend to be more visually “interesting” versus classically attractive, Van Cleef & Arpels makes a good case for the “pretty planetarium” with this complex member of the Midnight collection. Much of the dial is aventurine, which provides the sparkly deep blue backdrop for the celestial complication. Allow me at this early point to mention how indeed the Midnight Planetarium Poetic Complication is available with diamonds. One can theoretically order the watch with  a diamond-lined bezel (if you wish of course). Given the rotating bezel over the dial, the Midnight Planetarium watch does not look like most Midnight collection watches. The bezel actually moves the sapphire crystal as it rotates around and a small star shape on the crystal of course goes with it. What purpose does this serve? To indicate your “lucky star of course…” That is what they are calling it and the first step is using the peripheral calendar display around the dial and lining up the red arrow with a special day of the year. On that day (and around it), the Earth indicator orb will be under the star-shape helping to  highlight your special (poetic) day of the year. An element like that is really where you see Van Cleef & Arpels’ DNA covertly sneaking its way into an otherwise technical and straightforward watch design.

Those at all interested in the movement of the heavenly bodies will love the idea of having a small wrist-sized representation of six planets and the sun. It isn’t the entire solar system, but the watch does represent everything from the sun to Saturn in a range of colorful gemstones. They move in real time just as they do in the sky. The trick of course is in setting the watch. Most planets have long orbits and the initial adjustment of a watch like the Midnight Planetarium Poetic Complication is a chore often best left to a professional. In fact, that is probably why it is so important that the watch has an automatic movement. With that installed it is possible to simply keep the watch on a winder when not wearing it and not fear that the planetarium complication be too far off at any given time.