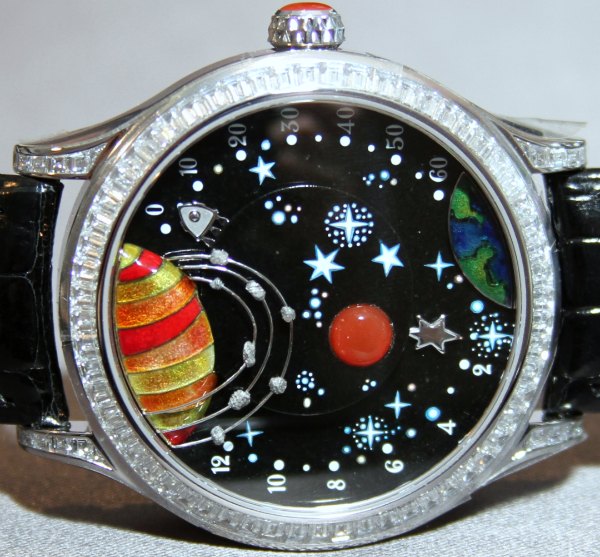 Each year Van Cleef & Arpels releases a series of limited edition watches that revolve around a certain theme. One of the themes this year was Jules Verne and the concept of discovery and exploration. To this end Van Cleef & Arpels created a few limited edition models to memorialize some of the places that Jules Verne described in his writings. There are also a few other pieces that expand on the concept of the exploration theme.

Pictured here are some of the pieces that directly address the stories of Jules Verne. This is not however a depiction of the entire collection. There are two types of watches here. Two that contain more standard Jaeger-LeCoultre Caliber 846 three-hand automatic mechanical movements, and two that contain a special retrograde hour and minute movement that is based on a small JLC movement and has an exclusive to Van Cleef & Arpels module in it. These latter pieces have a retrograde hour hand on the left of the dial, and a retrograde hour hand on the right. 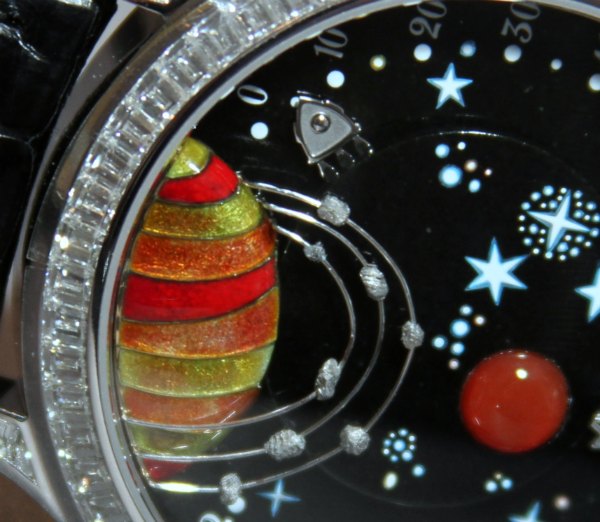 One of these pieces is the Five Weeks In A Balloon watch that I first wrote about here. This model has a small bird on the left as the hour hand and an anchor on the right as the minute hand. The watches are all in 18k white gold and 42mm wide (I believe for the round men’s models). You can also see oval shaped women’s pieces.

The concept of the collection is “Les Voyages.” In all there are maybe a dozen limited edition pieces – though a few seem to have differing names, the classification system confuses me a bit. Most come in something like sets of 22 pieces. There is one set that comes together as 4 pieces and retails for $425,000. This includes the four watches and a special presentation box that is a piece of art unto itself. Each year Van Cleef & Arpels makes boxes such as this. They very high quality and made from a combination of woods with inlays such as mother of pearl. The box has places for all four of the watches along with little windows to see them while the box is closed. 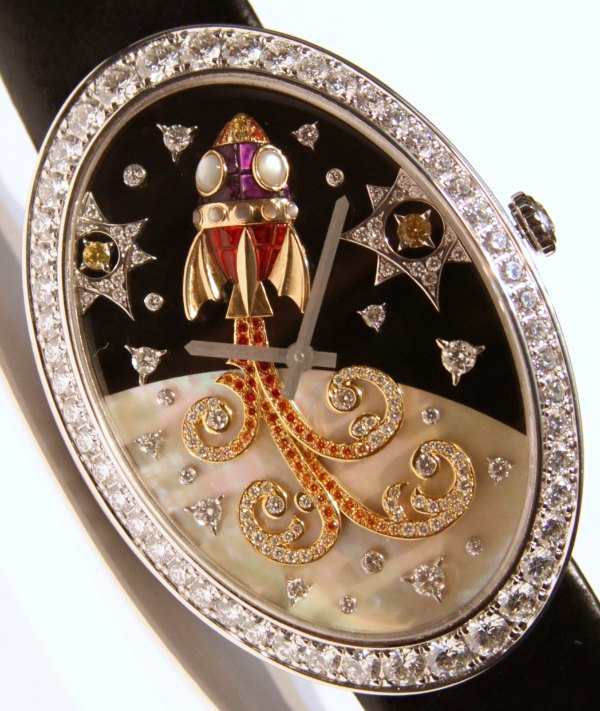 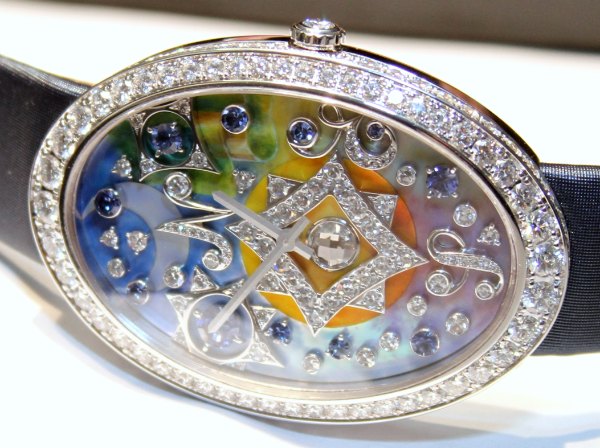 Boxes such as this are at the top of the food chain for “it is really nice and I can’t throw it away, but where the hell am I going to put it?” After spending over $400,000, the box is a nice welcome to the collection.

The watches themselves are interesting and beautiful, but not necessarily what I expect when I think of “Jules Verne.” Many people consider Verne to be the father of modern science fiction. For me, he is much more about that, versus just exploration. The watches seem to focus more on the places he describes in a decorative manner, rather than the subject matter of what he was talking about. These are very “un sci-fi” watches. They are however very pretty timepieces that happen to have a rocket ship or balloon on them. These could just as easily have nothing to do with Jules Verne and still be presented the same way. 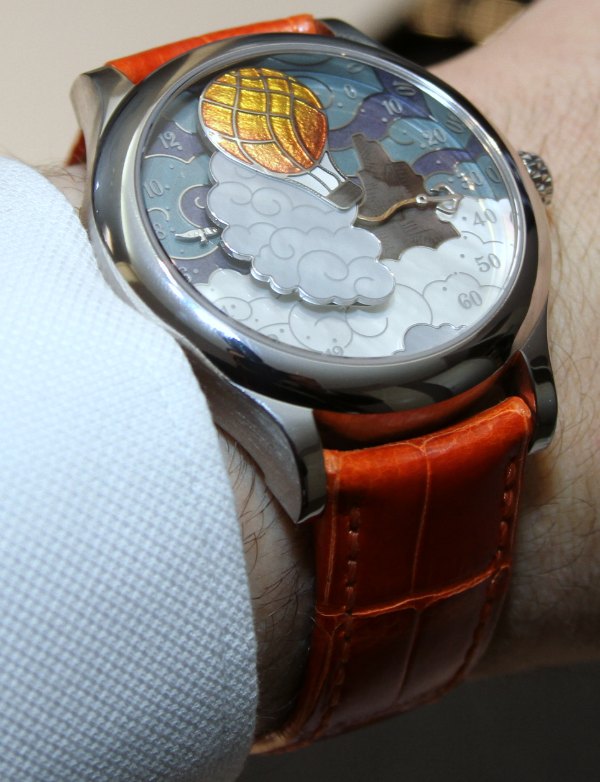 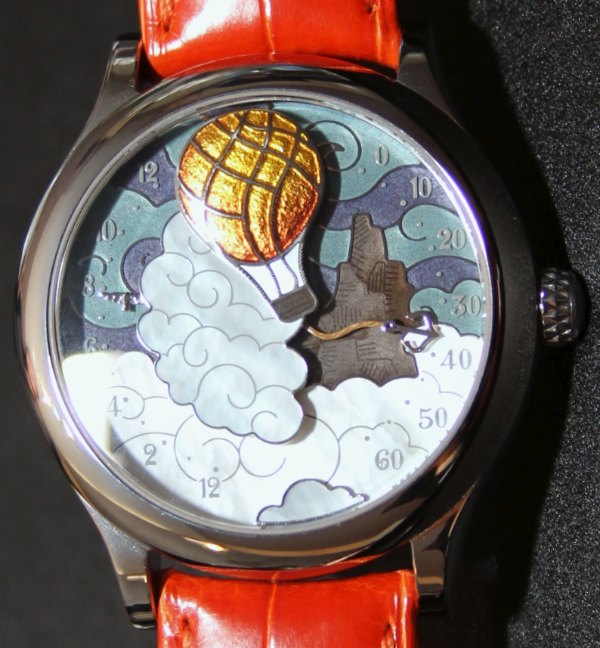 It feels as though Van Cleef & Aprels couldn’t decide how much Jules they wanted in the Les Voyages watches. As they use many highly talented female artists on the creation of the dial, there is a distinct feminine twist to these watches. It is possible though that I am looking for more techie stuff as I am of the Star Wars and video game generation. Speaking of the dials, they are stunning in their design and construction. Using engraved gold, mother of pearl, paillonne enamel, and other materials such as precious stones – the dials are created each by hand in a lush three-dimensional style. Few if any one in the world can rival Van Cleef & Arpel’s techniques and executions.

Each of these watches costs over $100,000 (if I recall correctly), and is worth the high price as an item of art and exclusivity. Van Cleef & Arpels really does make some amazing stuff – what pieces you will be drawn to most is a matter of taste. Look for many of these in museums decades from now.