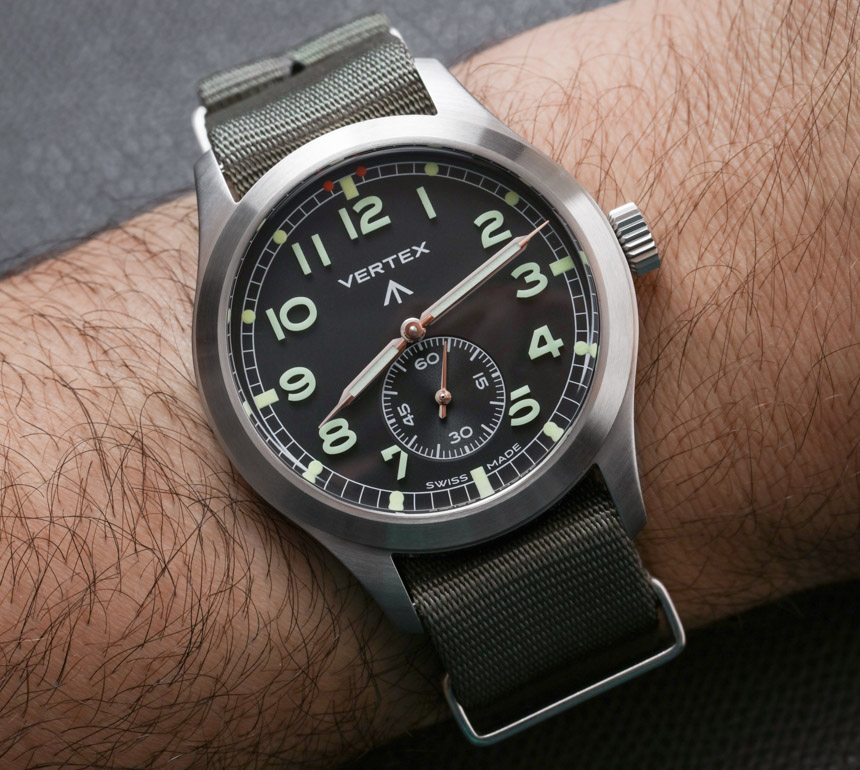 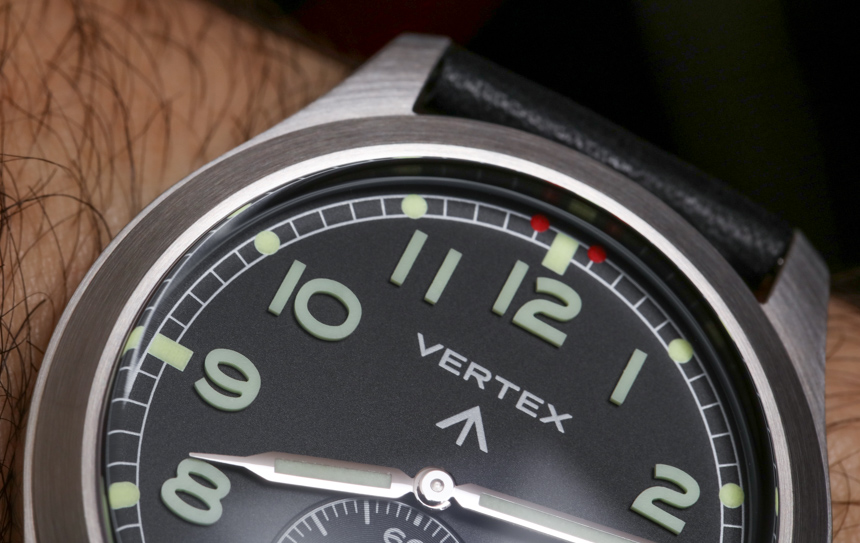 A dash of red on the dial works like a charm to make the watch feel just a bit sportier. I have no idea why this works so well, but when done correctly, a dab of red on an otherwise two-color watch dial instantly makes it look cooler. The red is placed in the 12 o’clock hour marker, and works so well because in the M100 dial design, it helps differentiate this hour marker position a bit more to help you visually orientate the dial when looking at it from an angle. 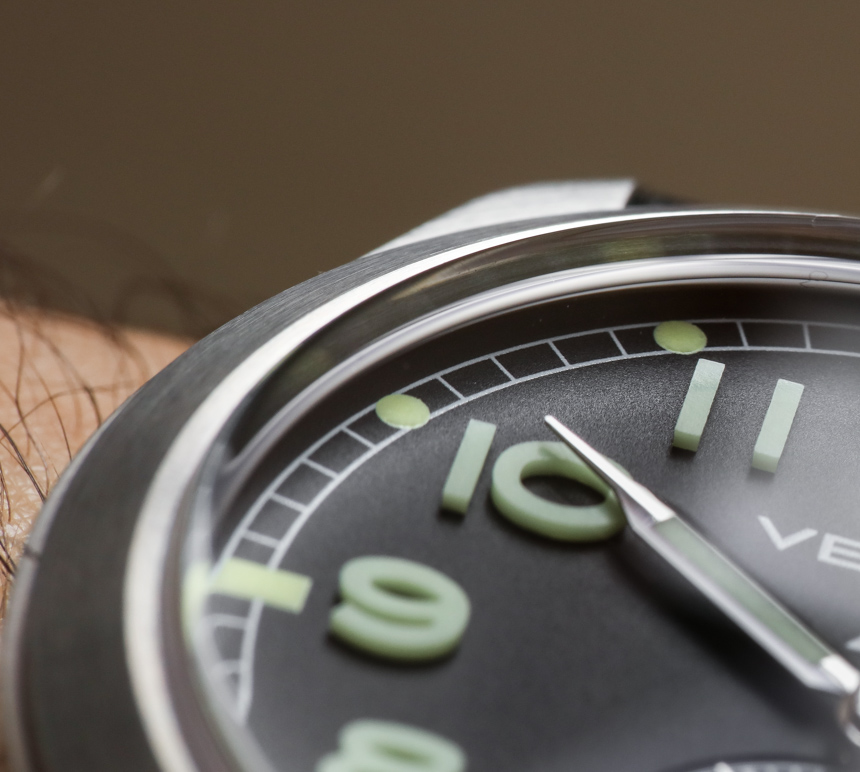 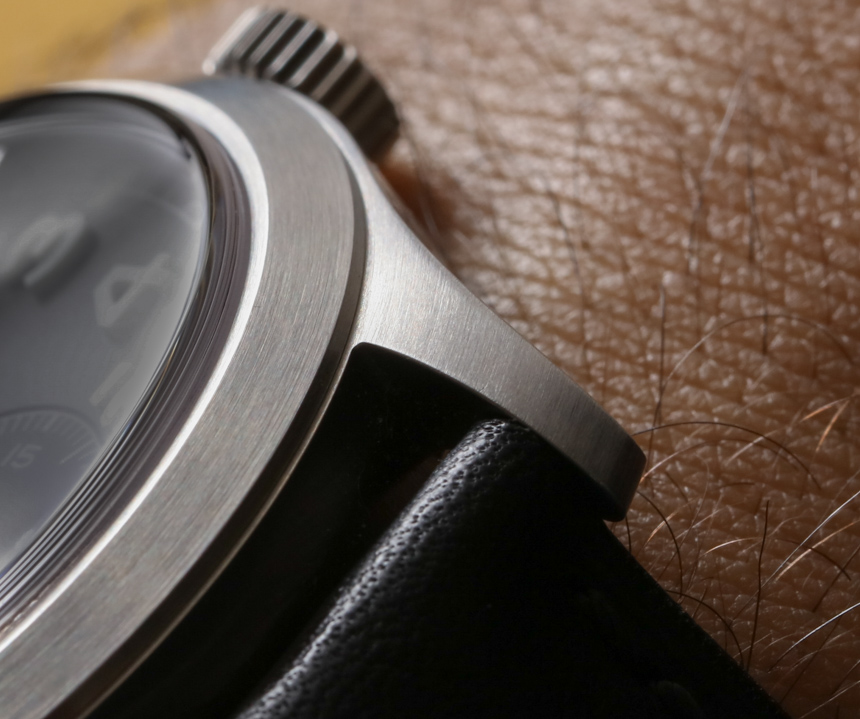 Over the dial is an AR-coated sapphire crystal – glare being a minimal issue (which is good). The M100’s steel case is water resistant to 100m (without a screw-down crown). I actually think the watch could have benefited from a screw-down crown. That would have made it a smidgen sportier, which would have positively fed the soldier fantasy a watch like this helps satisfy in the mind of the wearer. Anyway, only a few people will actually get this watch dirty enough that a screw-down crown would be of use. 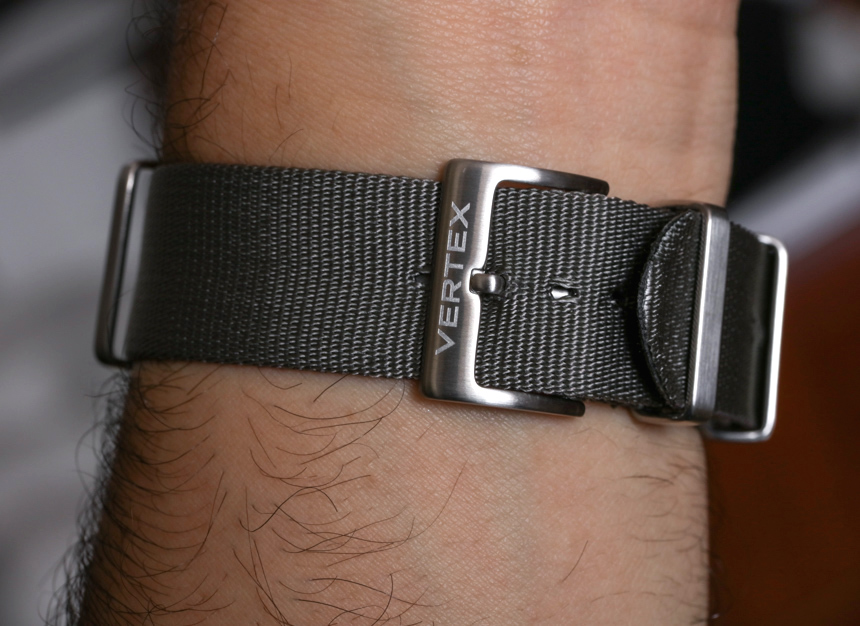 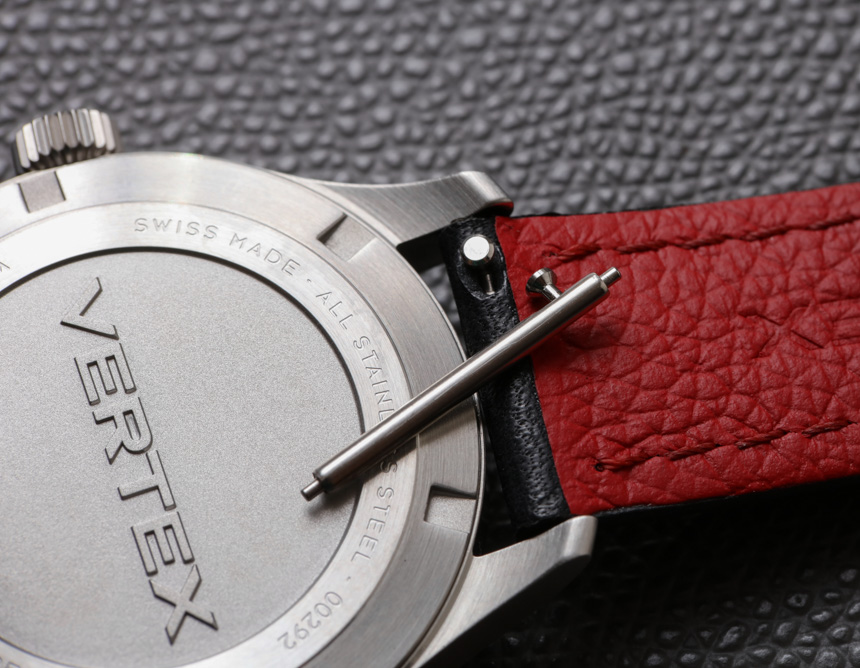 Vertex sort of ruins the fantasy in the packaging, which is a black plastic Pelican-style case. These are literally the most common boxes for so many types of sport watches today. Since the Vertex M100 is supposed to be a WWII style watch, why not have packaging that would be era-correct? I sort of wanted to see it laying in a molded velvet pillow inside of a brightly printed paper box. This is their first watch, so I’ll try to be less of a finicky watch nerd. In reality, I very much enjoy this watch, find it appealing, but wanted the brand to have even more time and money to prepare for this launch by going all out with the theme. I’m totally subscribed to the notion that many of these toys are akin to toys (for older boys), so we want the fantasy to go from packaging to product. 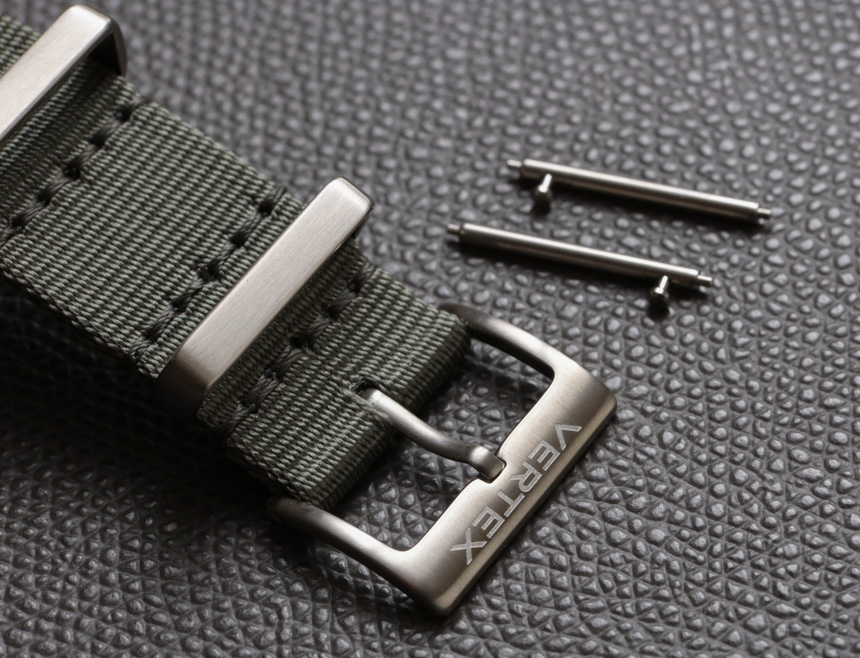 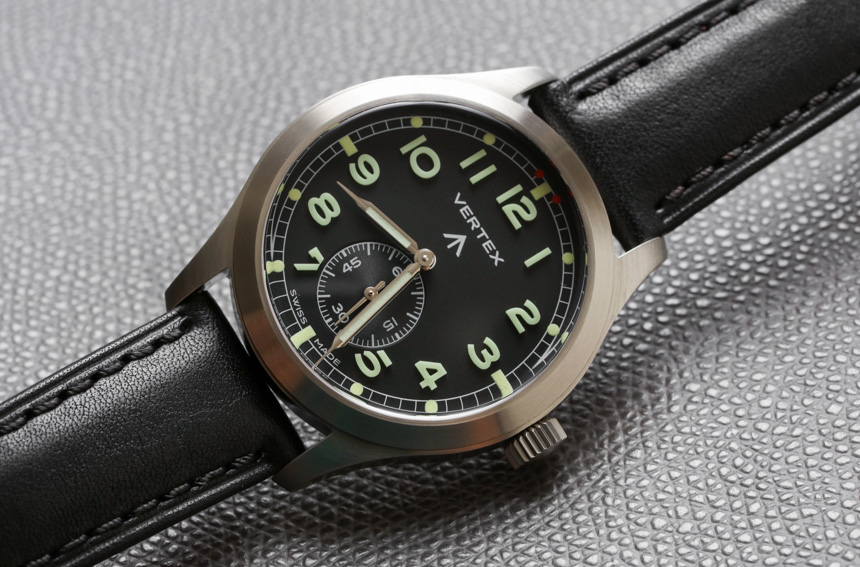 Vertex includes both a soft black leather strap as well as a gray-colored NATO-style strap with the M100. Both are totally acceptable options, but also incredibly conservative in their look. Unless you really want a nondescript utility watch look, I would recommend immediately starting to experiment with putting the M100 on various colored straps (20mm lug distance). 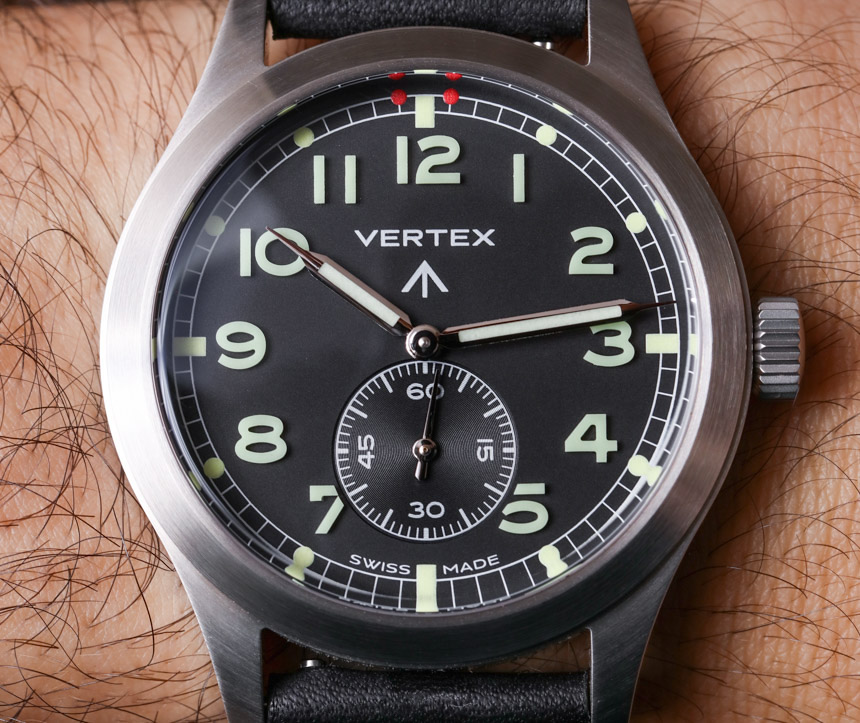 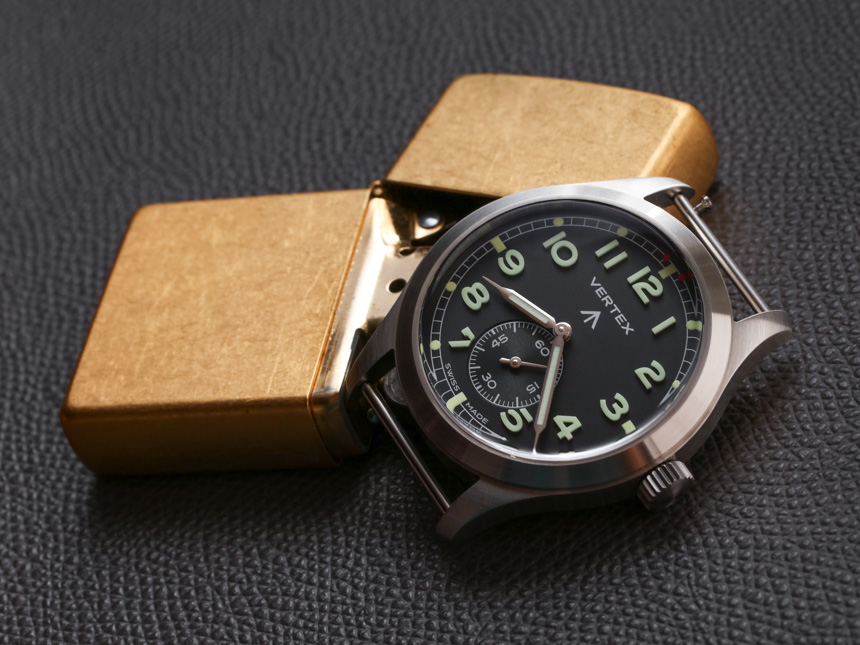 Vertex is planning on making future watches, which is a good thing since I feel as though the limited edition of 600 pieces M100 is a great start and a timepiece that will make a lot of watch guys happy. Something a bit weird (but not bad in my opinion) is how Vertex is going about selling the M100. Basically, if you want to buy one, you need to know someone who has one. Owners have a code that they can give out if someone else wants one. About a third of the M100 pieces are sold out. That might sound a bit pretentious and elitist, but Vertex has noble intentions. 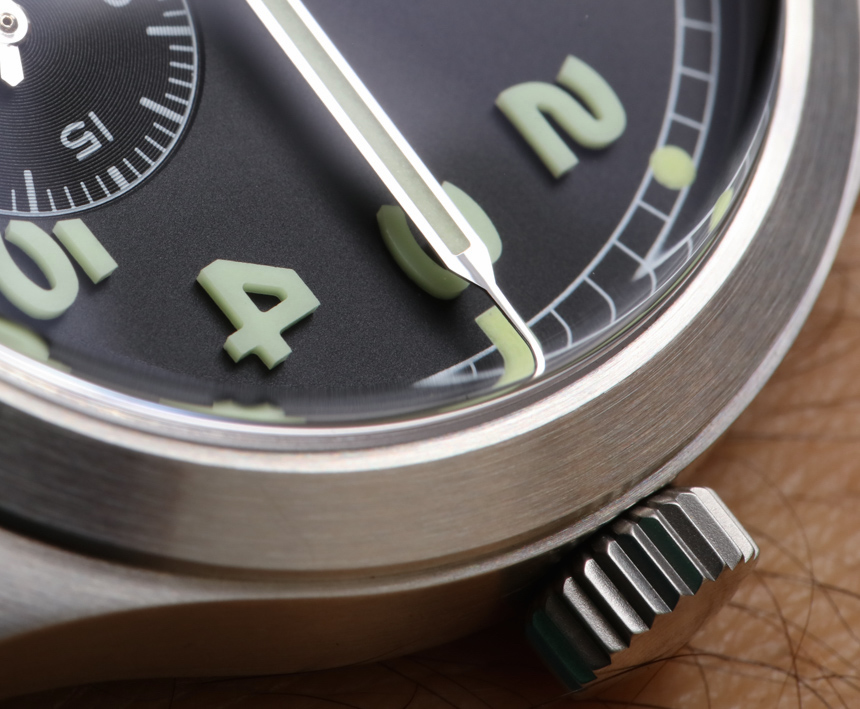 Cochrane admits this “referral” sales system might perk some eyebrows – it isn’t about the brand trying to be exclusionary. More so, he feels that it will help Vertex watches stay with watch guys. The idea is that watch collectors know and mingle with other watch collectors. Thus, to keep the relatively limited set of several hundred watches in a like-minded community, Vertex is trying to make sure all the owners are only separated by a few degrees of social connection. Cochrane also admits this strategy is an experiment – but it seems to be working so far. Price for the Vertex M100 watch is £2,500. vertex-watches.com

Necessary Data
>Brand: Vertex
>Model: M100 Limited Edition
>Price: £2,500
>Size: 40mm wide
>Would reviewer personally wear it: Yes.
>Friend we’d recommend it to first: British military history watch fan, or anyone who loves the idea of wearing a new, high-end version of a mid century pedestrian soldier’s watch design.
>Best characteristic of watch: Good emulation of the past in a modern package. Heartfelt brand story but proof of pudding is in the execution of the final product, which is quite impressive. Molded Super-LumiNova hour markers continue to delight.
>Worst characteristic of watch: Price combined with “newer” brand status will make value proposition challenging for some to swallow. Not everyone will be a fan of the “need to know someone” style of buying a watch either.