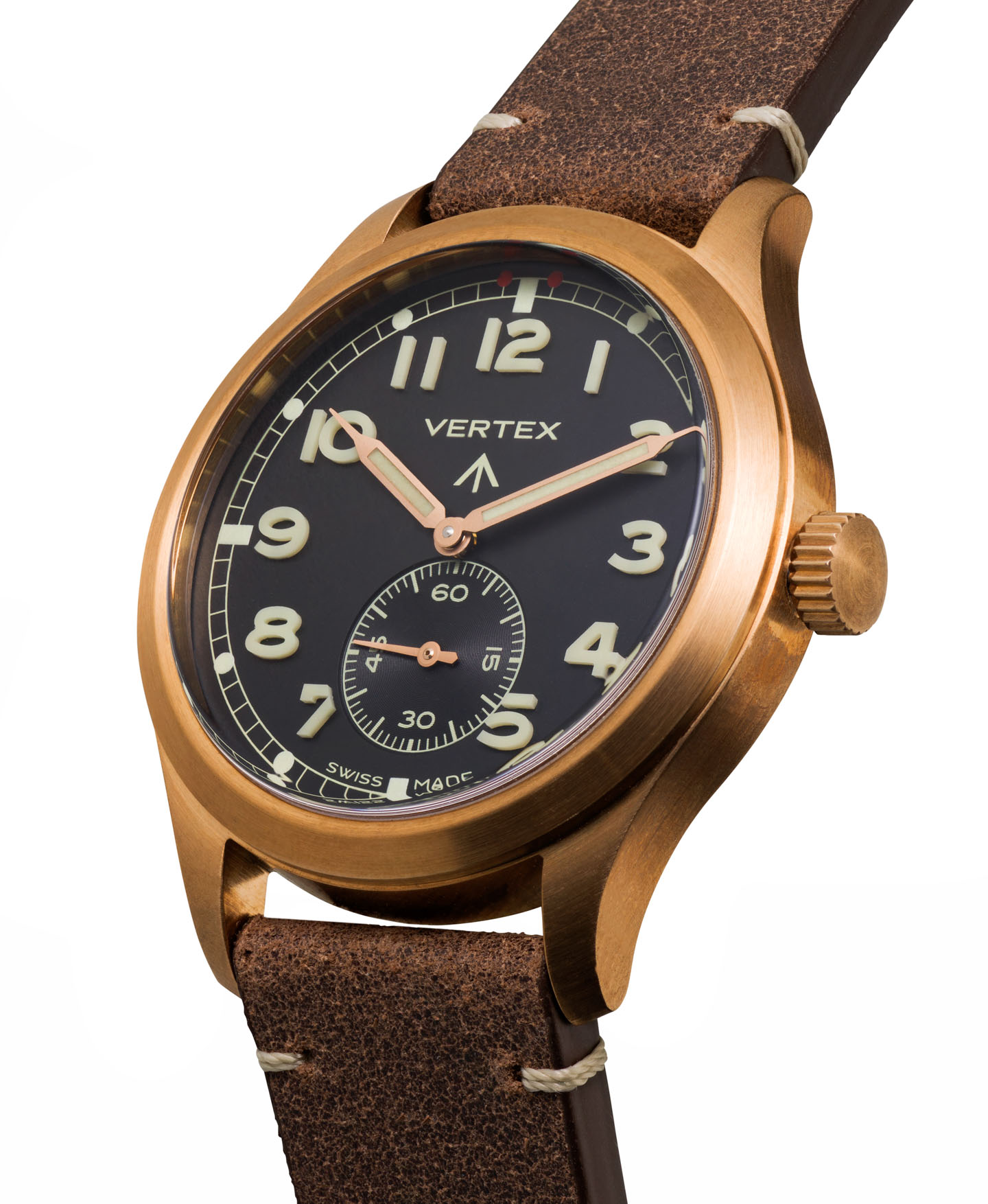 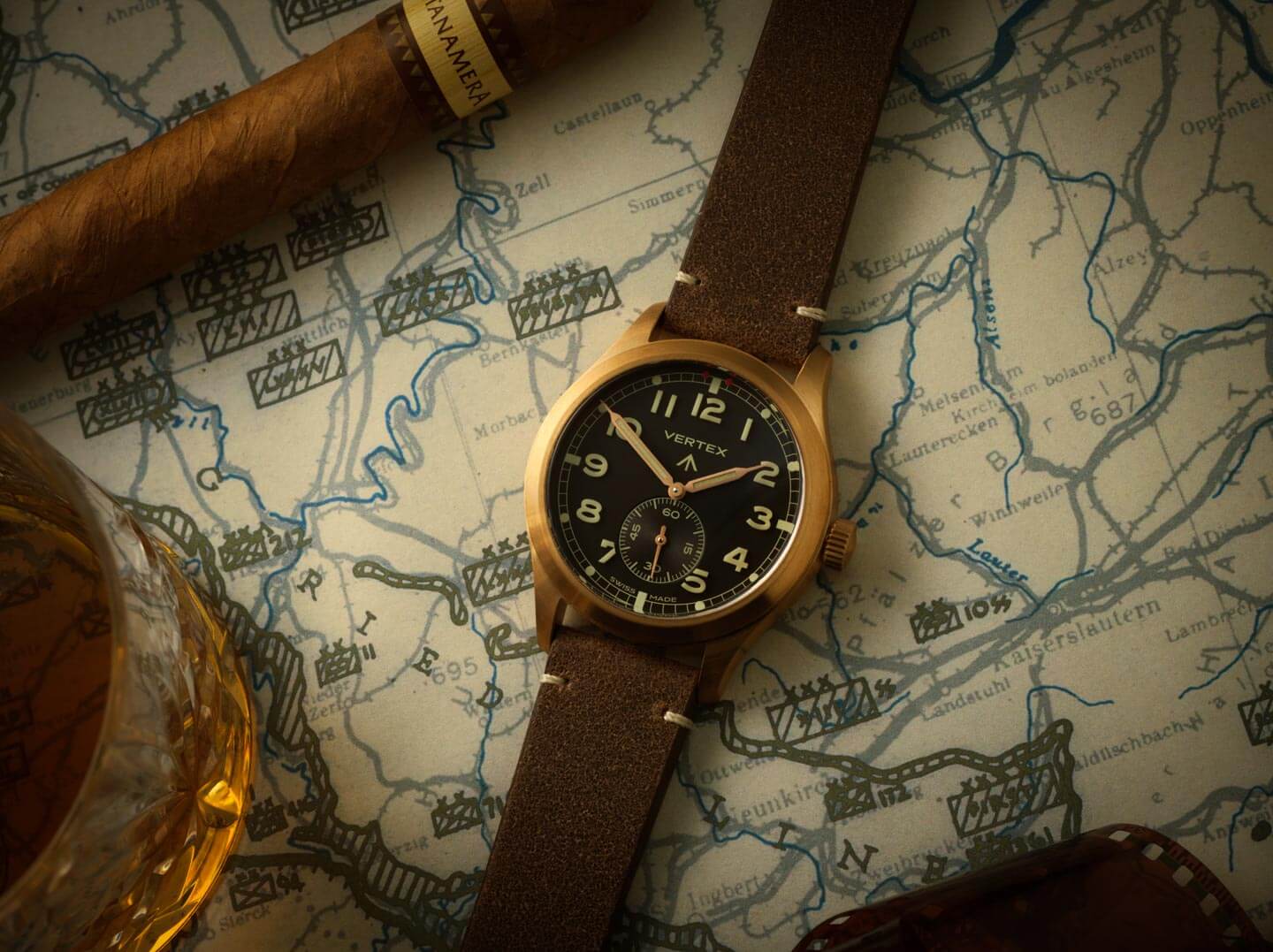 The next major release from UK-based Vertex is a bronze-cased version of the extremely popular M100 collection of military-inspired watches. Known as the Vertex Bronze 75, the special set of watches is also meant to honor the 75th anniversary of the end of World War II in 1945. A full hands-on review of the Vertex M100 watch can be found on aBlogtoWatch here.

Back during the more than decade-long conflict, Vertex was one of a dozen watchmakers that officially produced military watches for the British government. These twelve watchmakers were known as the “dirty dozen,” and they produced a particular watch specification for general infantry use. After the war, a lot of soldiers continued to wear the military watches in civilian life and so ushered in a new era of importance for military-inspired wristwatch fashion.

Bronze is among the most popular watch case materials today when it comes to timepiece enthusiast interests. Its warm sheen and tendency to organically oxidize attractively make bronze an interesting alternative to steel — without costing more. Having been rendered in a few styles, bronze metal is now available as the base case material, adding the attractive “patina” metal to the steel-cased M100 watches that were previously produced. The Bronze 75 watch case is 40mm-wide and water-resistant to 100 meters. The back of the case is in steel and is a replica of the precise casebacks fitted the Vertex Cal 59 WWW watches produced in 1944 and 1945, complete with product military serial and edition numbers.

Inside the Vertex M100 Bronze 75 is a thin manually wound movement that features the time with subsidiary seconds dial. Swiss Made, this ETA Peseux caliber 7001 movement operates at 4Hz with about two days of power reserve. Over the watch dial is an AR-coated domed sapphire crystal, and each of the Arabic hour numbers on the dial are produced from solid pieces of luminous material (a major upgrade when compared with original Vertex military watches from WWII).

Noteworthy for its quality straps as much as its watches, Vertex supplies three straps with each Bronze 75 timepiece. The straps include a “vintage” brown leather strap, an “A.F.0210 green fabric strap, which is a replica of the straps used during World War II, and a special Zulu Alpha ZA strap. The watch comes with quick-release spring bars, making strap changes easy rather than a chore requiring tools.

aBlogtoWatch: What started as a project to revive a family name, the Vertex brand is now a real business. What do you have to say about being in the watch industry?

Don Cochrane: It’s been an unbelievable learning experience, and I am very happy to say generally a very pleasurable one. Not only has Vertex’s return been well received by the horological world, in general, but somewhat surprisingly by other watchmakers, too; they have been incredibly supportive. I am now in a group of five British watch companies that are in regular contact, sharing ideas and issues. The camaraderie helps a lot — it can be a lonely world running a company, and it’s wonderful to have a few wise heads to bounce ideas off.

My technical learning curve has been steep but not unexpected. Much of technology in a mechanical watch remains unchanged for years, but it’s the small advances in materials that I have really tried to take advantage of. The introduction of the molded Super-LumiNova in our watches has not only given us an aesthetic point of difference but it is also absolutely one of our owners’ favorite features.

aBlogtoWatch: The Vertex M100 was launched with a special purchase scheme whereby buyers would give other buyers access to buying the limited edition watches. Is that how Vertex watched are still purchased? What did you learn from starting a watch brand that way?

Don Cochrane: The idea at the start was to create a community around the M100 and Vertex. It worked very well and is still a strong feature. As our understanding of our story has become more focused, we have now made the M100 only available to active military personnel and military veterans. We feel it’s really important for them to have ownership of a watch based on the piece that was made for them originally.

A lot of what we’re doing now and will be doing in the future takes its narrative from that military background. Of course, Vertex also has watches available to civilians available directly from Vertex in London, although many are limited editions. A lot of brands at the moment go for an exponential growth model. Our aim is for long term sustainability, not to saturate the market. 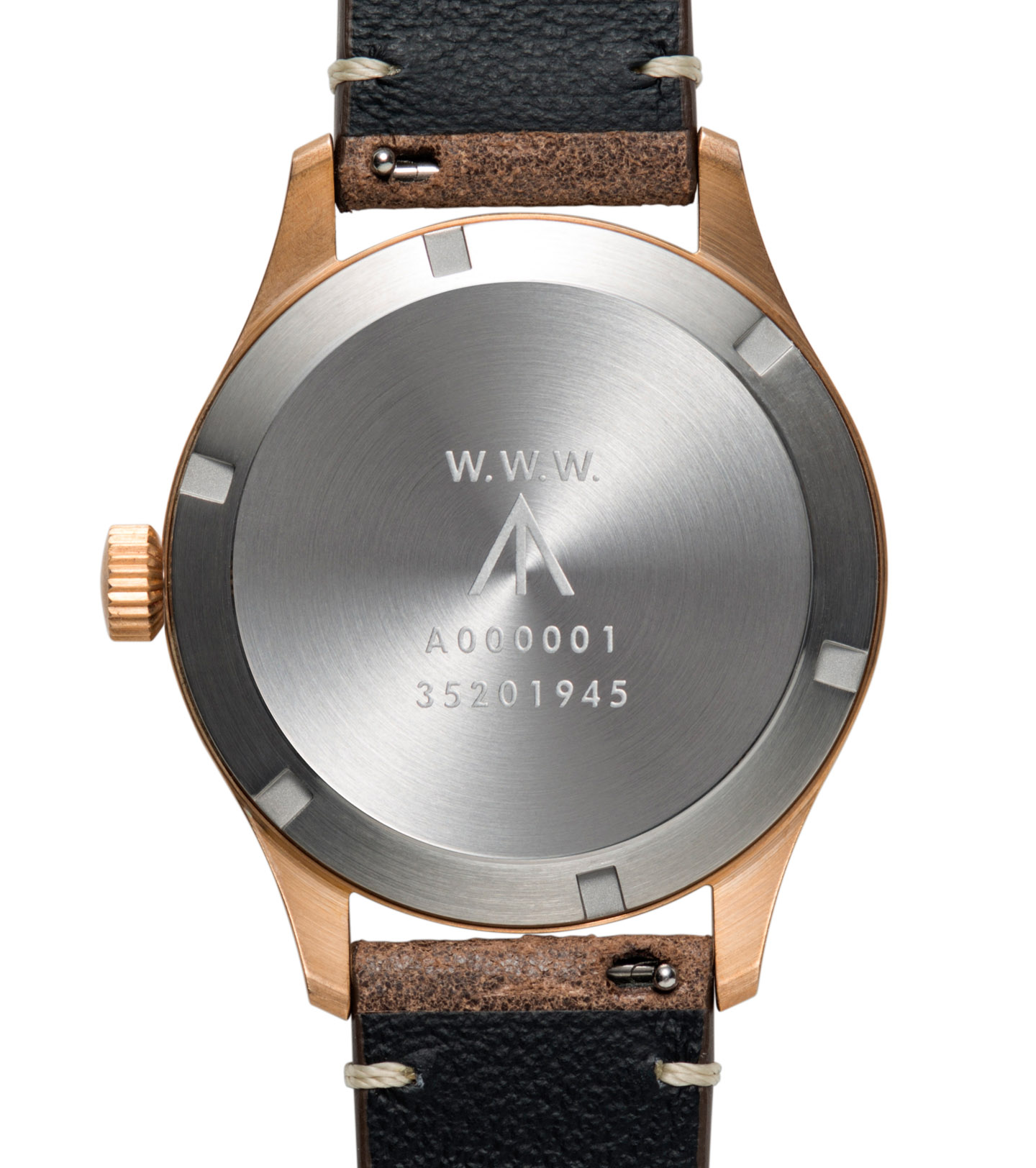 Don Cochrane: Bronze has always had a romantic historical significance, being one of the first metals worked by human hand. Bronze also has an importance within military equipment from the shackles on the rigging of ships to the compasses carried by so many soldiers. Even the medals and statues that signified the campaigns and achievements from that time were wrought in bronze. A watch case made of bronze gains its own patina, which goes even further to signify the passage of time. I think the way the Bronze 75 has turned out really has been one of my proudest moments at Vertex.

aBlogtoWatch: Vertex was one of the original “dirty dozen” watchmakers to be selected to produce particular military wristwatches during World War II. Can you explain the dirty dozen story and how Vertex fits into it?

Don Cochrane: In 1943, the British war office saw the importance of having a general use timepiece for the armed forces. Until then almost all service watches were personal civilian items. A specification was soon drawn up, they were to be accurate, reliable, and both waterproof and shockproof. These watches had a black dial, Arabic numerals, luminous hour and minute hands, luminous hour markers, a railroad minute track, shatterproof crystal, and a stainless-steel case. Powering them would be a 15-jewel manual hand-wound movement. 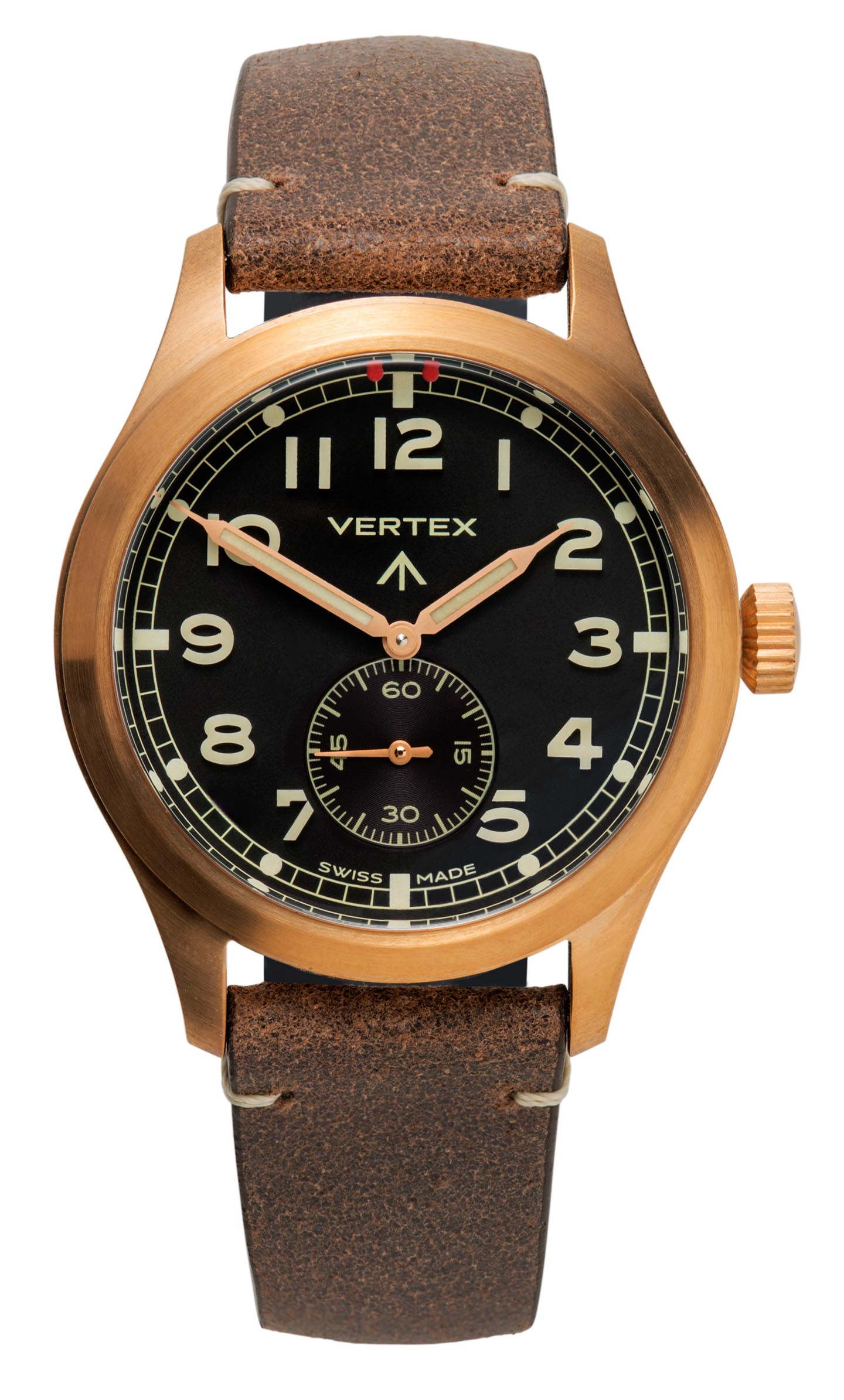 The Military code for these watches was W.W.W. (watches wristlet waterproof). With British watch factories concentrating on munitions and weapons manufacturing, requisition officers were sent off to Switzerland to find companies that could fulfill the order. In the end, 12 companies would come to the call this brief: Buren, Cyma, Eterna, Grana, Jaeger-LeCoultre, Lemania, Longines, IWC, Omega, Record, Timor, and Vertex. (Although Vertex was a British watch company, it had a Swiss manufacturing plant.)

aBlogtoWatch: Your vintage field watch re-creation project in the Vertex M100 was a hit. But it is a watch with many competitors. What have you come to realize you did correctly from a product perspective in the M100 watch collection?

Don Cochrane: When I started Vertex and consequently began work on the designs for our first watch, I knew I wanted to base it around our calibre 59 WWW. First, I thought it was a good idea to move quite far away from the original DNA to a much more modern look, taking what I like most from many modern watches and some of the principles from our Cal 59. However, the longer I spent with the original Cal 59, the more perfect it seemed. Then it became a real struggle to make a modern watch that did truly pay homage to it. I wanted the scale to be correct, so moved up to 40mm but keept the same large sub-second and balance in the numerals and railway track minute marks. The syringe hands had to exactly intersect the minute track, and the markers on the sub-second I had to match to the orientation of the marker on the original. 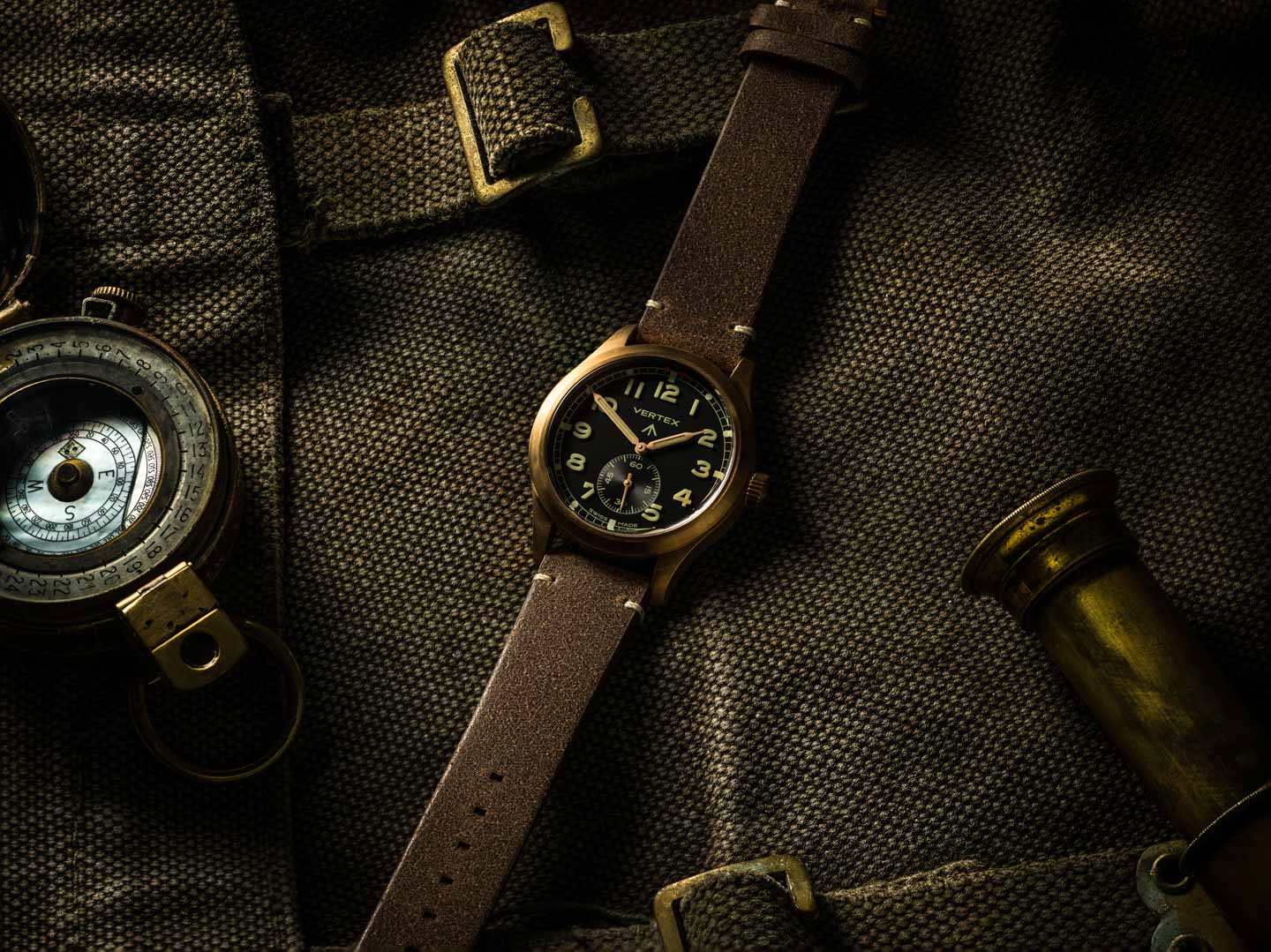 The sub-seconds was the hardest thing. If you look at all modern interpretations of WWW watches, they generally have very small sub-seconds because modern movements have already defined where that sub-seconds hand has to be. We spent about six months working with ETA to ensure that it truly represented the original, reaching from the bottom of the dial to the center mark. I always love the way the six had been lost in the five and seven had been cut, so really wanted to keep that to again modern interpretations seem to have lost that honesty. I’d like to think of those factors and the community that comes with owning a Vertex what has really made it work so well.

Learn more or order via the Vertex Watches website here.