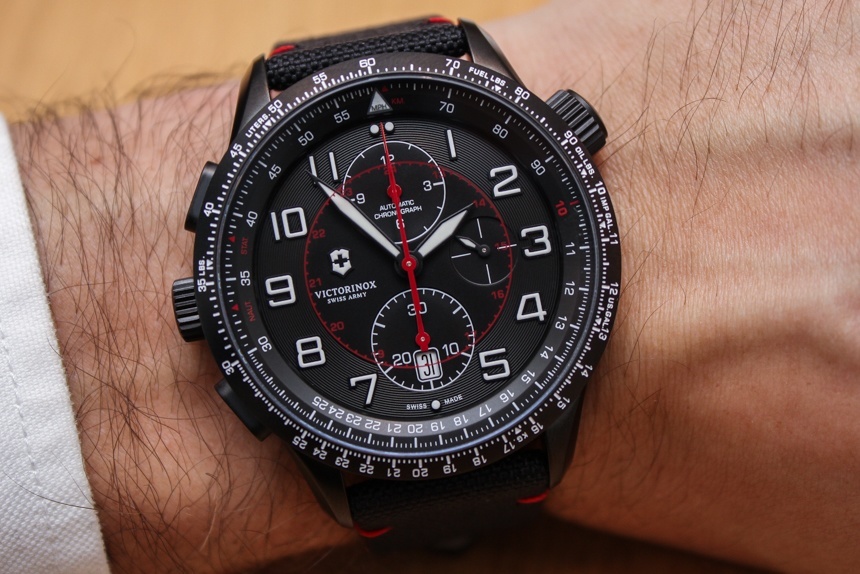 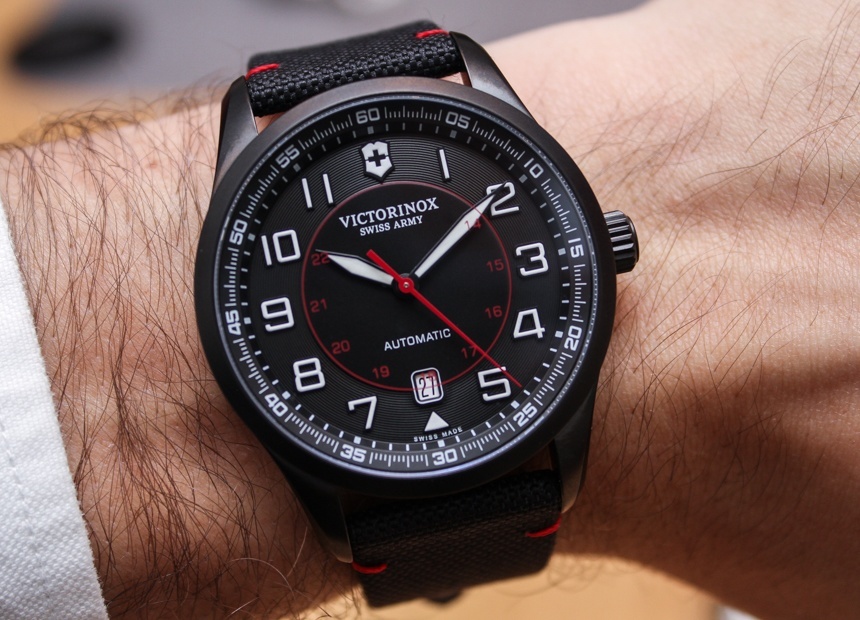 Few brands enjoy both the brand awareness and accessibility of Victorinox. Being easy to find in retail and carrying the name of the ubiquitous and well-loved Swiss Army knife makes for an enviable spot in the market. Even if a casual shopper isn’t aware that Victorinox makes watches, the brand is a household name and, among the sea of big ticket watches at Baselworld, Victorinox offers respite from the five and six-figure prices common among headline-grabbing mechanical Swiss watches. Among their 2015 models, the Airboss Black Editions offer typical Victorinox quality and Swiss mechanical movements matched with an attractive mix of pilot and field watch designs. 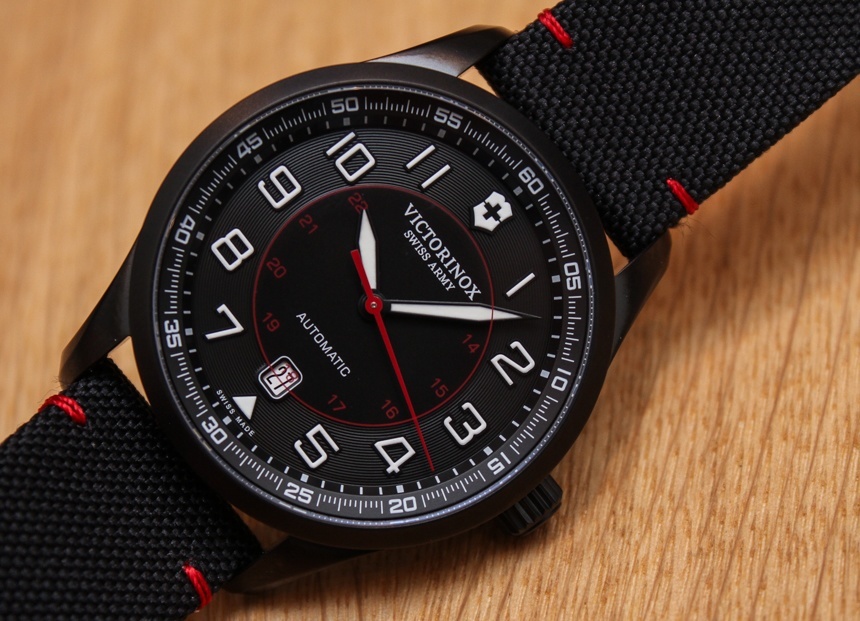 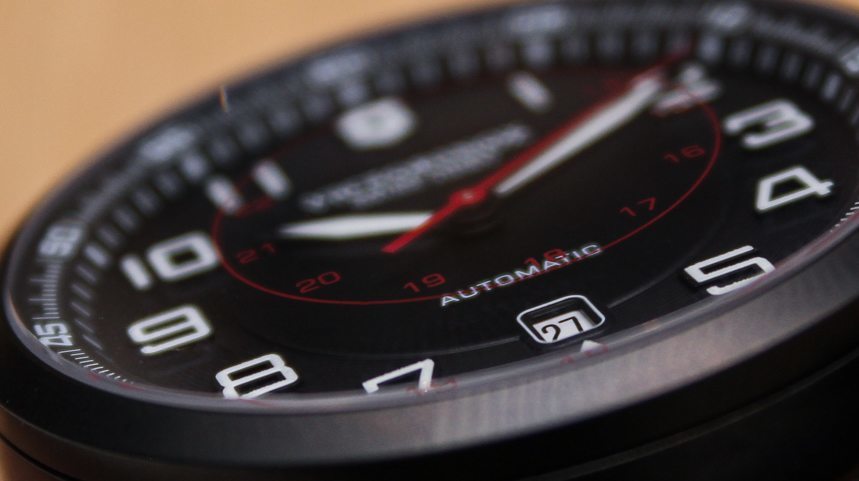 Victorinox’s signature red is used not only on the seconds hand but also on a 24-hour scale that is printed on the underside of the sapphire crystal. The three dimensional effect is interesting and unobtrusive, adding a bit flare to the triple-coated anti-reflective sapphire crystal used for these sporty models. The Victorinox Airboss Mechnical Black Edition is water resistant to 100m and offers both a date display at six and a display case back. 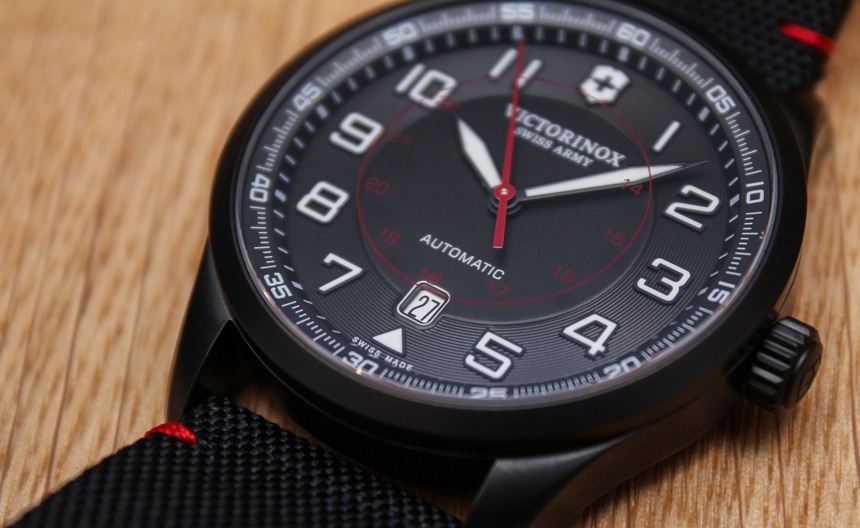 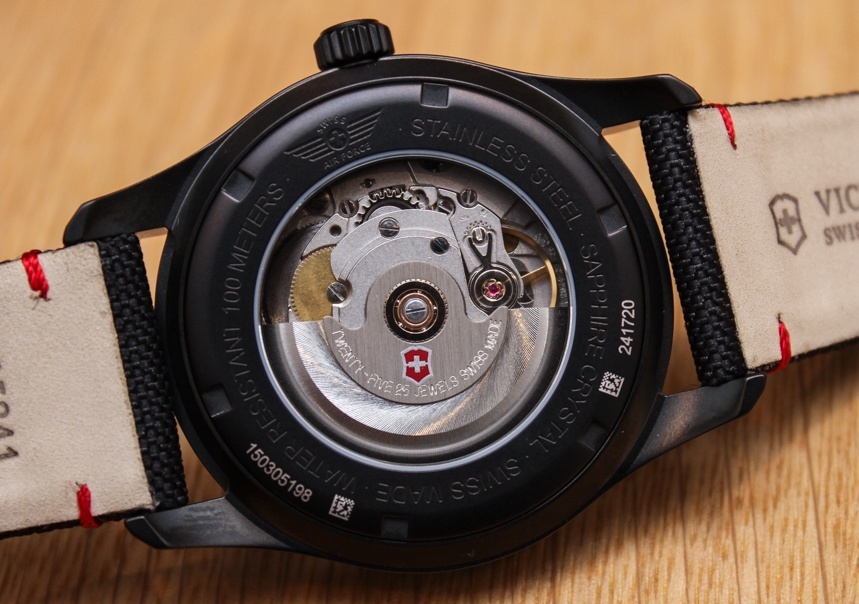 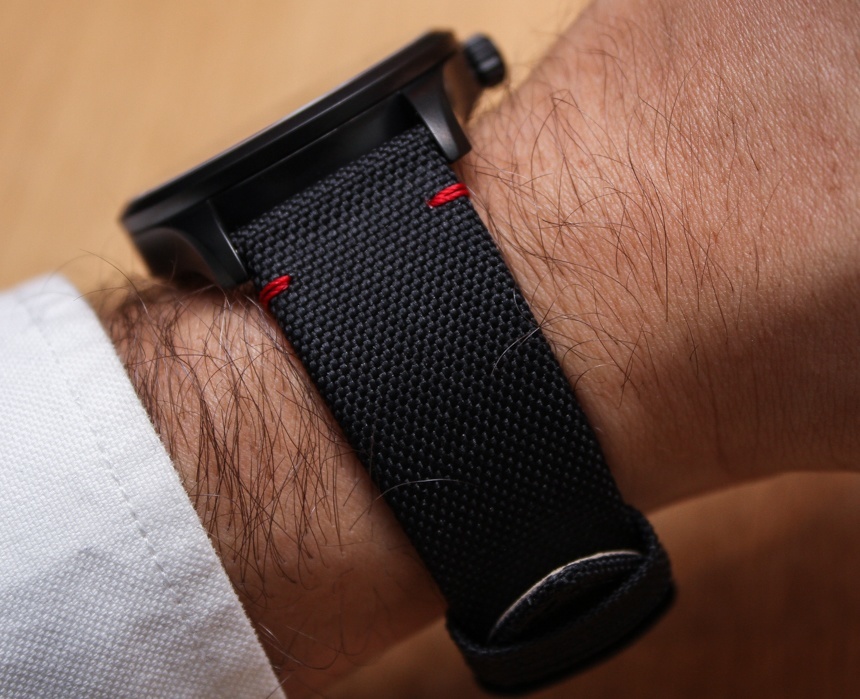 The 42mm sizing for the Victorinox Airboss Mechanical Black Edition is great and the proportions are spot on. After seeing this model in person, we had no reservations in naming it one of the best watches of Baselworld 2015. This military-esque Victorinox Airboss is powered by the Swiss ETA 2824, a reliable and fuss-free movement that has become the default choice for a time and date Swiss engine. The black case and red detailing are nicely supported by a minimal nylon strap with red accenting. The Victorinox Airboss Mechanical Black Edition is just as good on wrist and, with an MSRP under a thousand dollars, Victorinox continues to offer a solid value proposition. 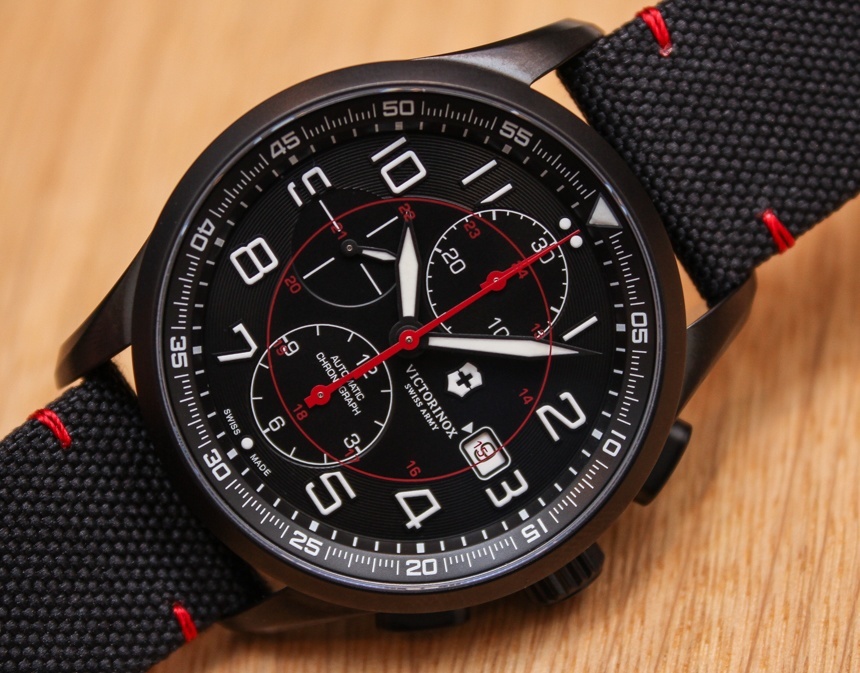 The next watch in the series is essentially the same concept but applied to a chronograph. The Victorinox Airboss Mechanical Chronograph Black Edition is 45mm wide and houses an ETA 7750 automatic chronograph movement. The same mix of pilot and field watch seen in the three-hander is on display in this chronograph, which also boasts good legibility despite a somewhat awkwardly short minute hand. Just as with the three-hand model, the anti-reflective crystal hosts a similar 24 hour scale on its underside. 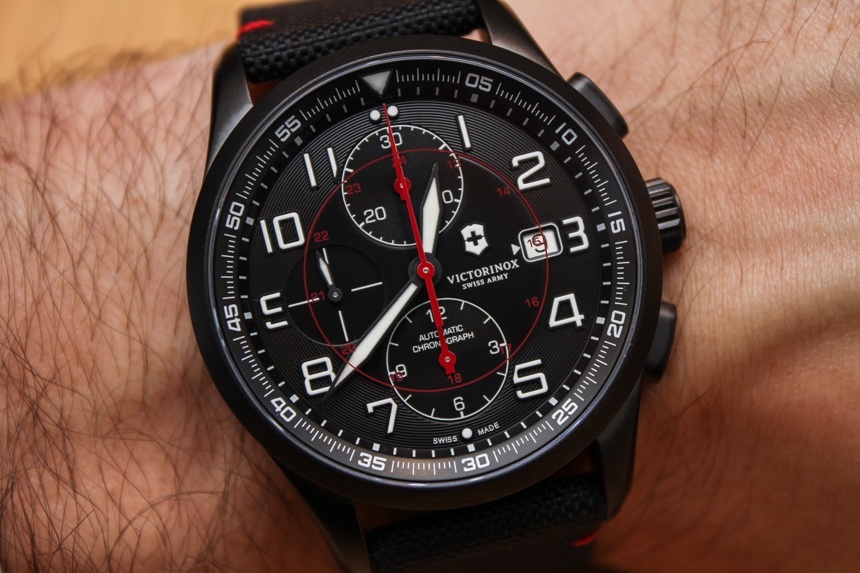 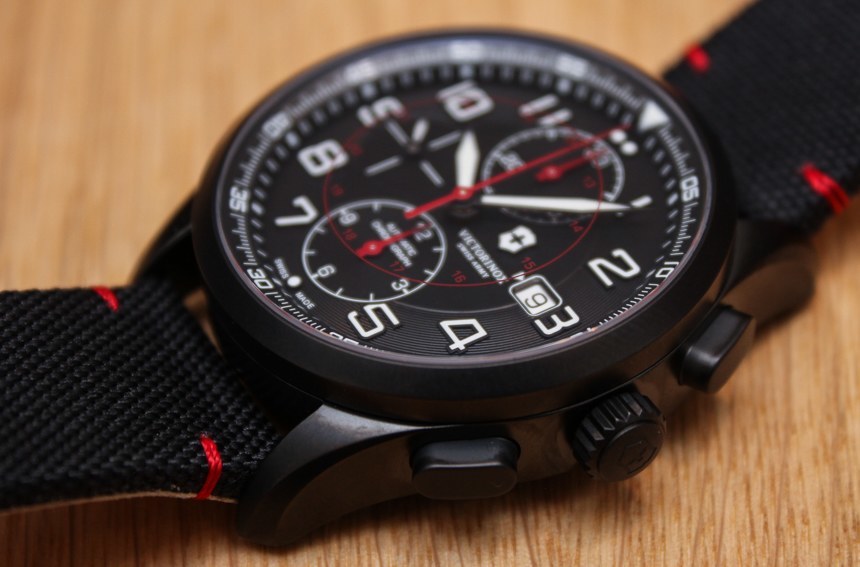 Given the 7750 within, the Victorinox Airboss Mechanical Chronograph Black Edition offers a 30-minute counter at twelve, a date at three, a 12-hour register at six, and running seconds at nine. The chronograph hands are red and offer a nice separation from the white on black of the main dial display.

As with the three-hander Victorinox Airboss Black Edition, the chronograph is water resistant to 100m, features a display case back, and comes fitted to a simple but attractive nylon strap with a fold over clasp. While the 45mm sizing is a bit big for my tastes, the design is good, and the appeal of this model is undeniable as it offers an attractive middle-ground between the simplicity of the Mechanical Black Edition and the entirely more hardcore final watch in this series, the Victorinox Airboss Mach 9 Automatic Chronograph Black Edition.

The Victorinox Airboss Mach 9 Black Edition, like the Mechanical Chronograph Black Edition above, is 45mm wide with a brushed PVD steel case that houses an ETA 7750 automatic chronograph movement. The dial design is similar, but with the date expressed within the 30-minute counter at six and a more minimal running seconds display at three, the Victorinox Airboss Mach 9 manages to offer a somewhat cleaner dial layout that better preserves the arabic numerals as well as the overall balance of the design. 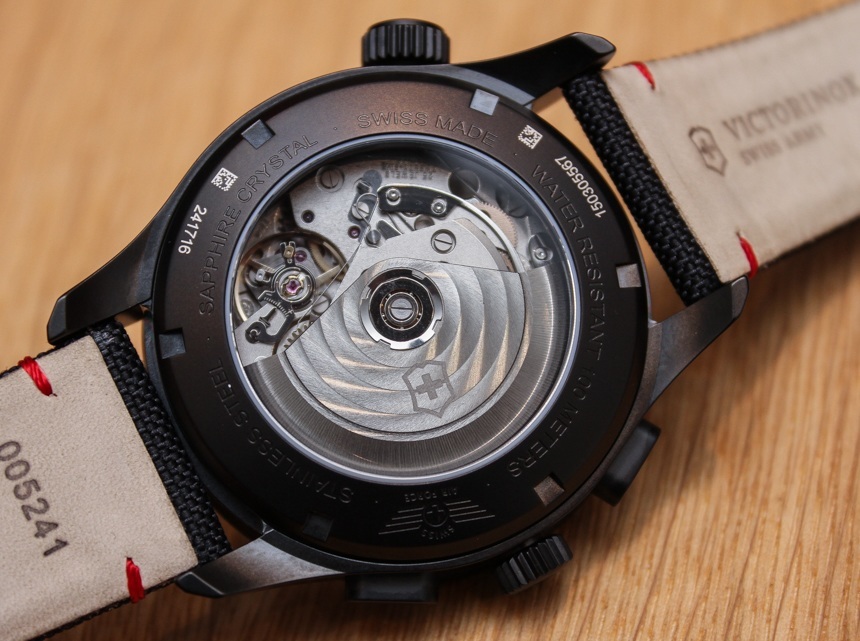 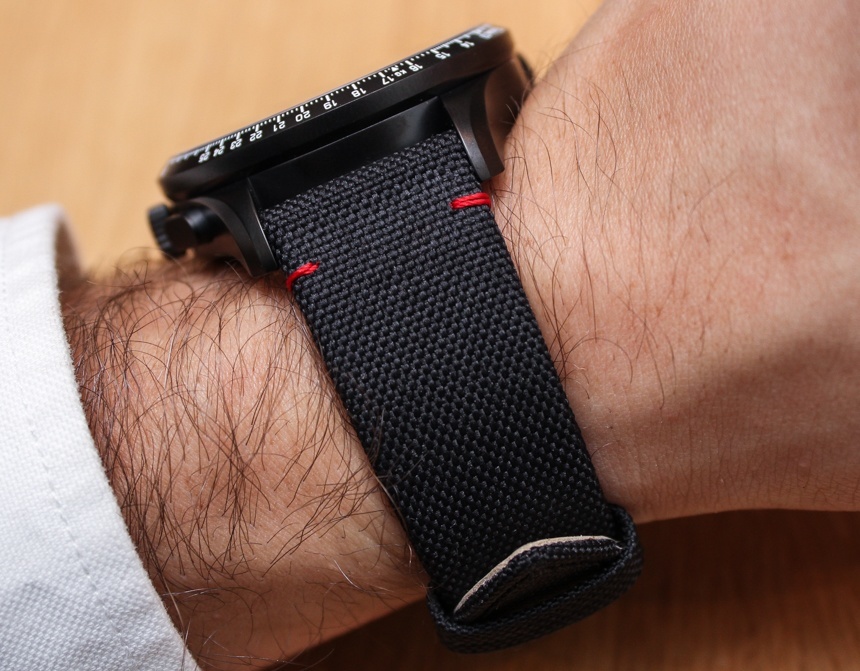 The chronograph controls and main crown have been mounted on the left side of the case for a more comfortable grip when pressing the pushers and to keep the controls from being obstructed by gloves. The crown at two rotates the internal calculator slide rule bezel that can be used along with the matching external scale to measure a number of different variables, from speed to converting different weights across various units of measurement (and a lot more). The Victorinox Airboss Mach 9 Black Edition is easily the coolest of the two chronographs, and it manages to exhibit the same tough but accessible appeal that I would normally attribute to watches from Sinn. 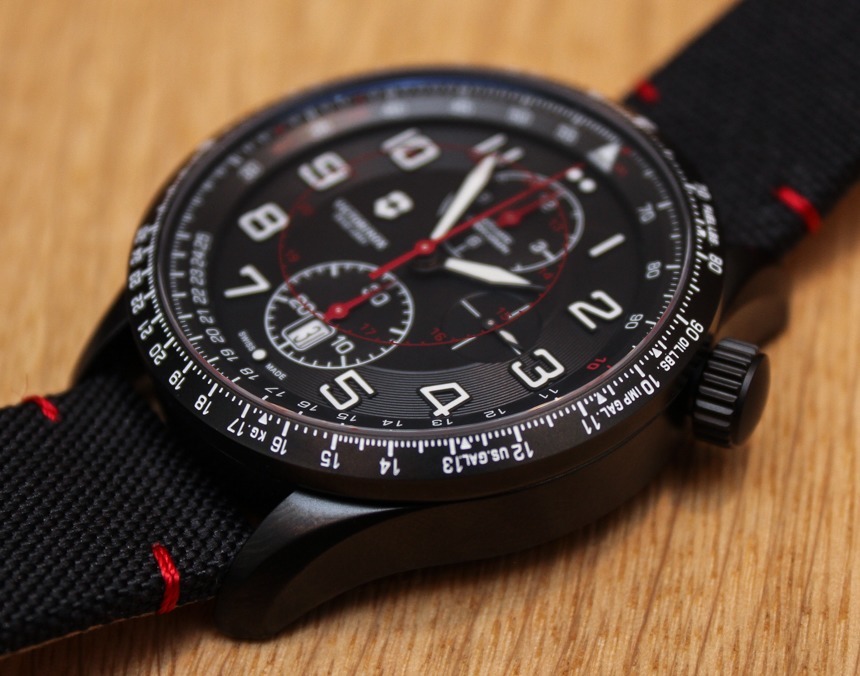 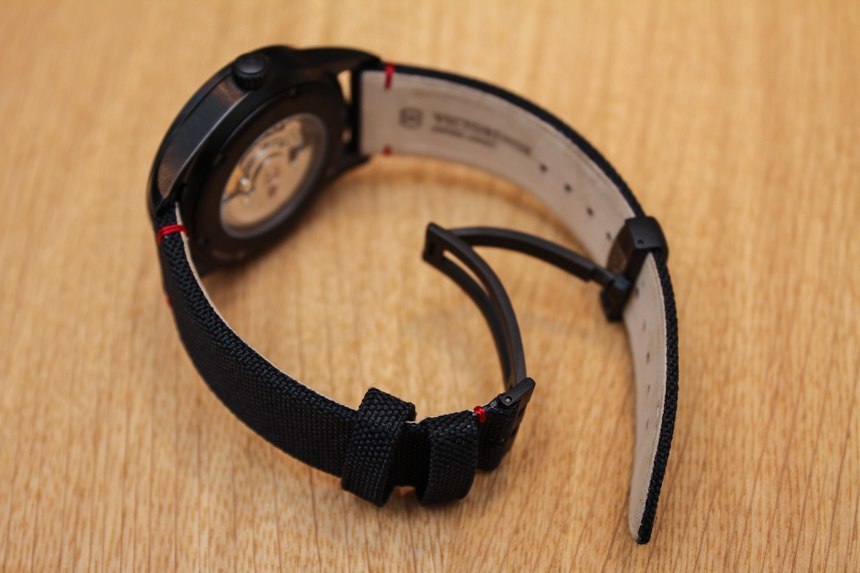