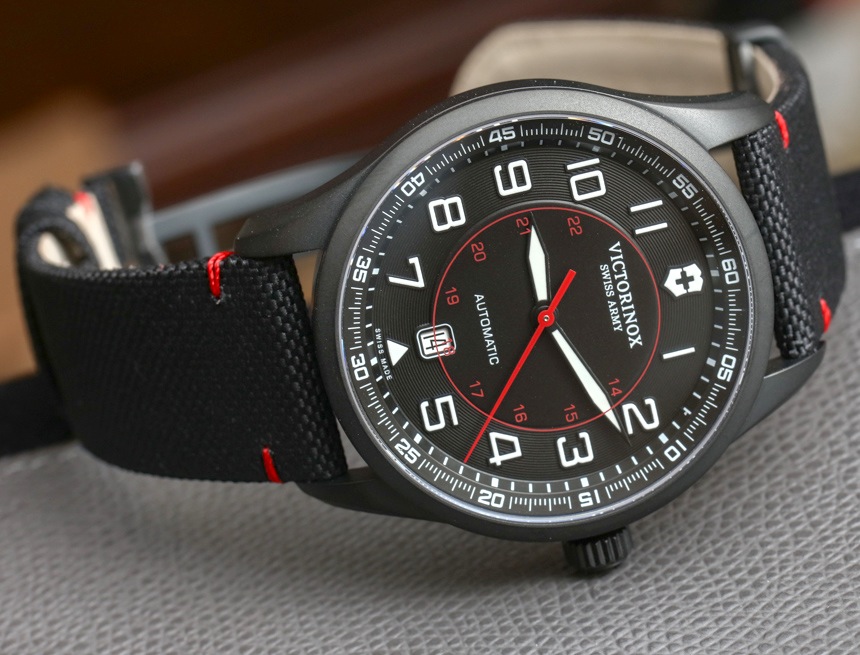 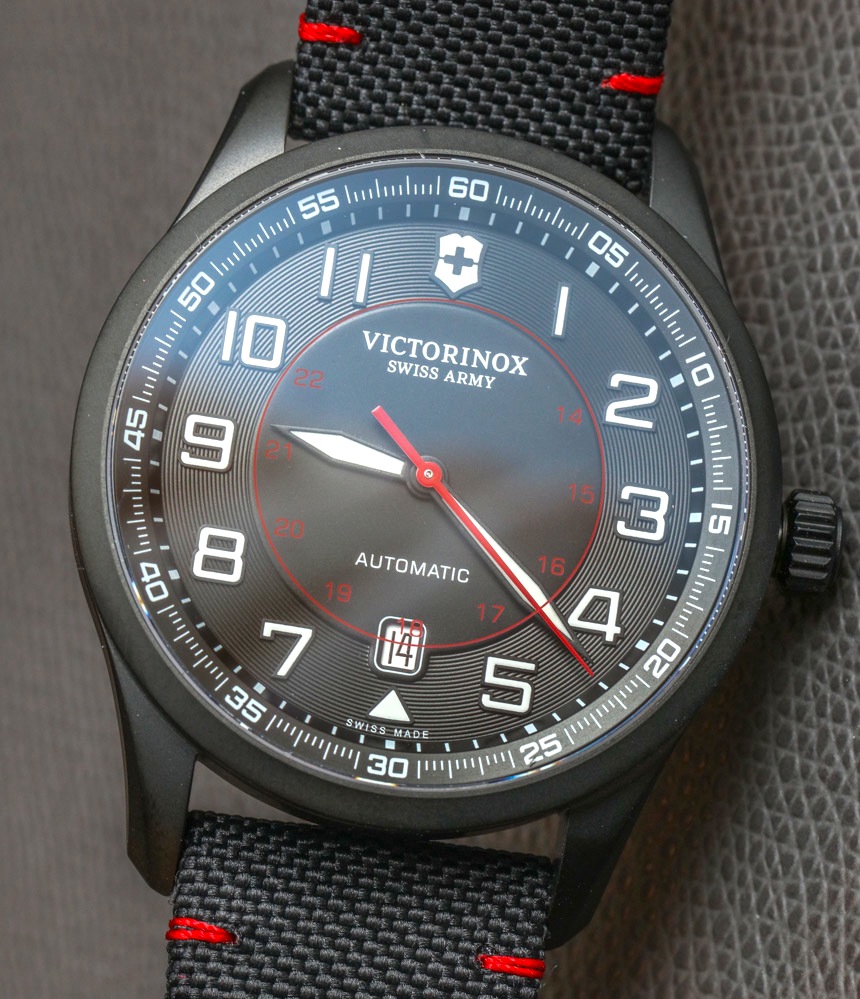 At Baselworld 2015, we voted the updated Victorinox Swiss Army Airboss watches as among our top 10 of the show. Several years ago, Victorinox Swiss Army debuted the Airboss collection as a sturdy and sporty family of decently priced and strictly mechanical timepieces. For many people, the Airboss collection signaled a dramatic departure from the Victorinox Swiss Army watch brand they knew because of the higher prices compared to their more typical quartz-based watch collection that the company continues to do very well with. Mechanical watch lovers who are looking for decently designed timepieces from a major brand at prices that aren’t shocking have appreciated the comfortable coolness of these models – which promote a classic sense of style with a modern approach to an everyday pilot-style timepiece.

Last year, after Baselworld 2015, we went hands-on with more of these new Victorinox Swiss Army “Black Edition” Airboss watches here, that include both this three-hand “Airboss Mechanical” reference 241720 watches, as well as the chronograph models (of which there are two). On the Victorinox Swiss Army website, two chronograph models (which differ in terms of the bezel) have the “Black Edition” title which this three-hand model oddly does not. With that said, you should know that they were released at the same time, and are currently the only Airboss watches with PVD-coated black cases. The rest of the Airboss watches are in brushed and polished steel. 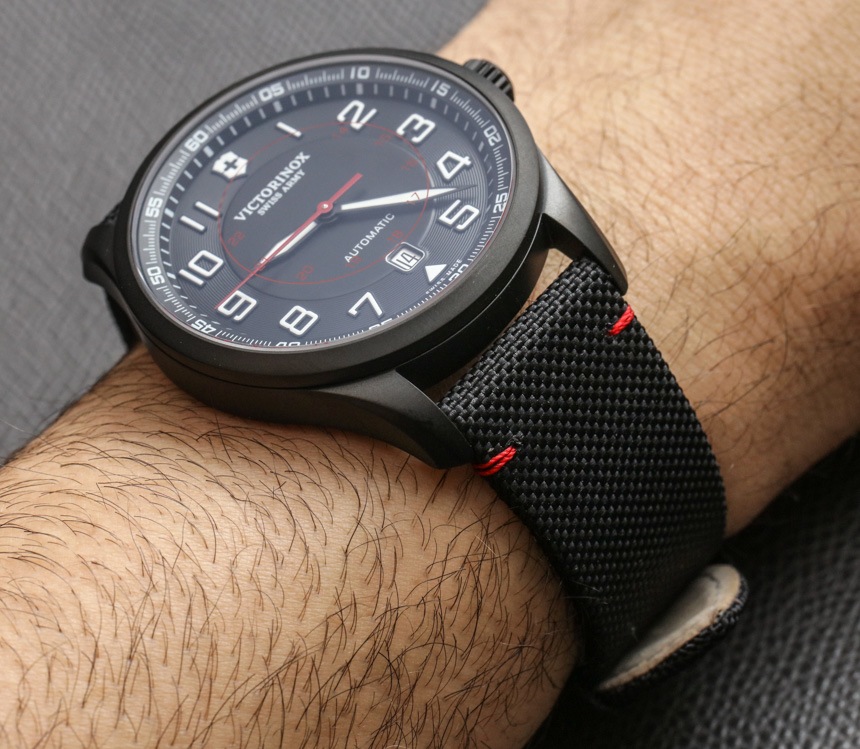 At 42mm wide and roughly 11mm thick (with 100 meters of water resistance), the Victorinox Swiss Army Airboss Mechanical is a wonderful mid- to upper-range sized watch that nevertheless enjoys a not-too-thick profile. It might not be dress-watch thin, but it can easily hide under a sleeve. Wearing comfort is very high and the matte black finish offers an eye-pleasing stealthiness that people want from black watches. Still, there is a little pizzazz in the form of the red accents on both the dial and the strap. 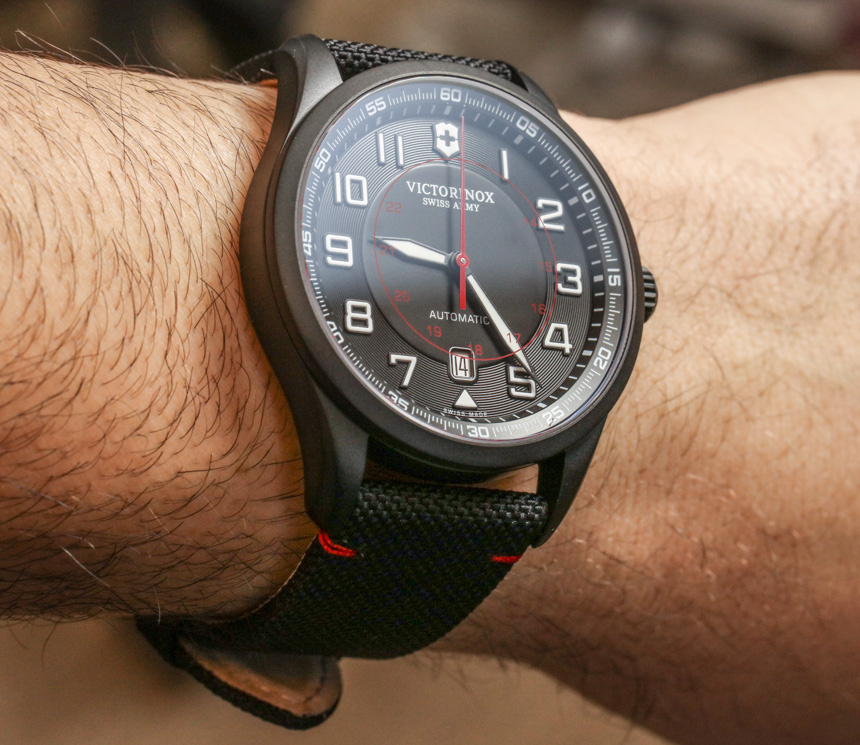 Conservative tool-watch looks is what this Victorinox Swiss Army Airboss Mechanical watch is all about. This is for when you want a super legible daily-wear that nevertheless has some personality and design clout. The attractive symmetry of the dial and the stylized Swiss Army style font for the raised Arabic numeral hour markers is certainly something which is pretty – if not beautiful. Victorinox Swiss Army did a great job with the dial, mixing the traditional look of a Victorinox Swiss Army sport watch with a few new little elements here and there. It is an evolution versus an revolution in terms of design, but the little differences are welcome. 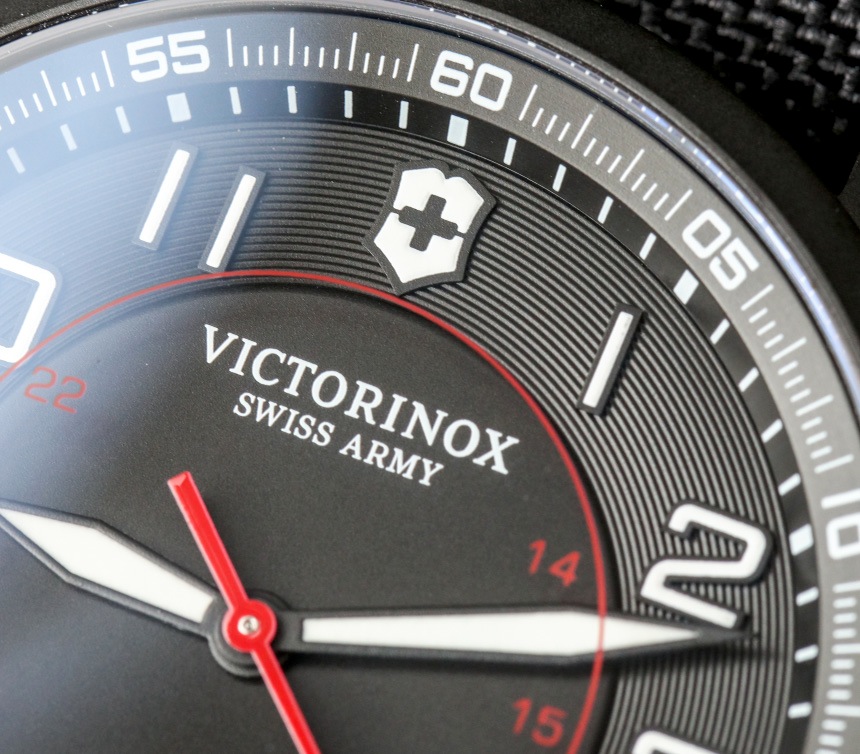 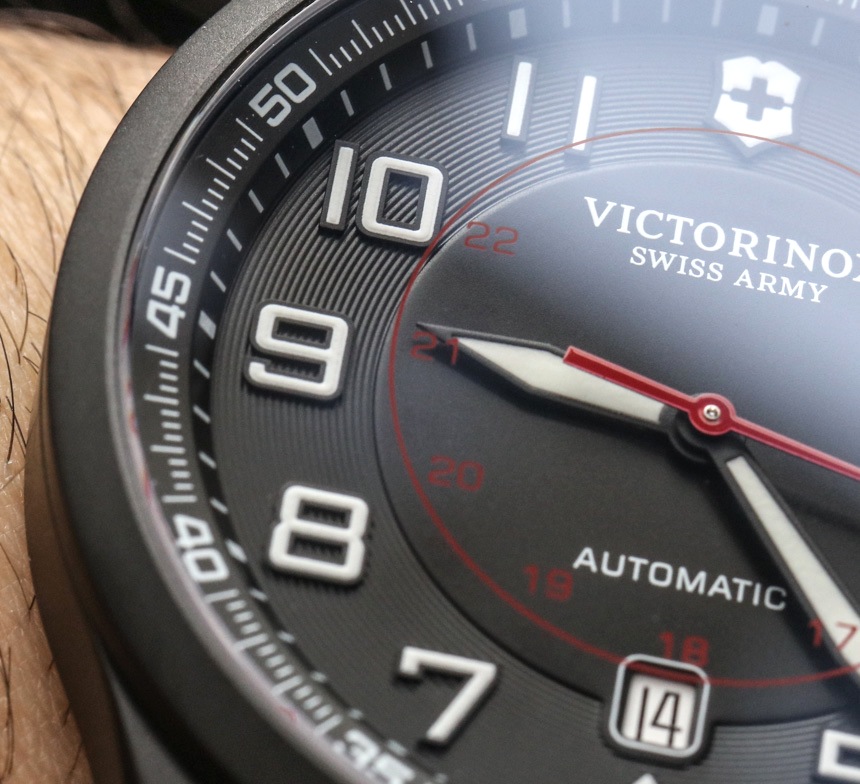 Perhaps the most controversial of the design elements is the red 24-hour scale which is actually printed on the rear of the flat sapphire crystal. This makes the 24-hour scale float on top of the dial and actually bisect the date window. It is actually a lot more subtle this way than having it printed on the dial – but I am sure it will cause some people to complain. I see it as a unique quirk that gives timepieces like this needed personality. 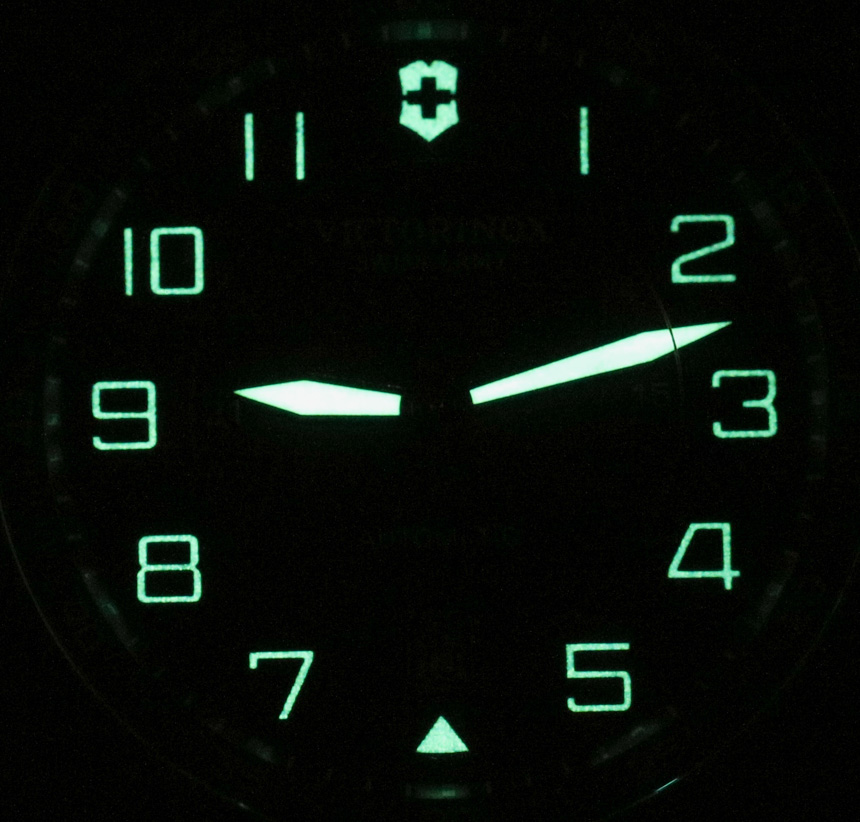 The high-contrast between the slightly textured dark gray face and the luminant coating on the hour markers and hands is where a lot of the good legibility comes from. I also like the sloped flange ring around the dial which enhances the sense of dial size as well as depth. 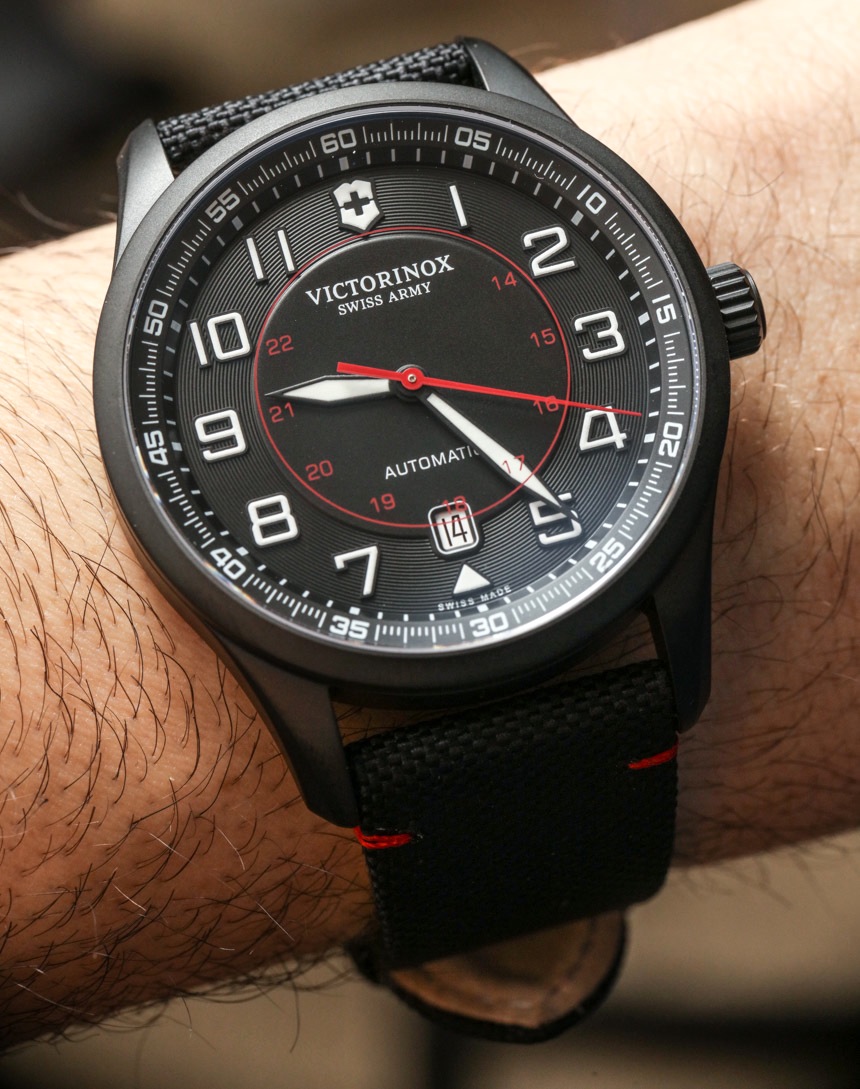 The Victorinox Swiss Army Airboss Mechanical 241720 case itself is simple and traditional like the other models in the Airboss collection. It won’t be the reason you buy the watch, but it helps frame the overall tool watch concept well. You really see Victorinox Swiss Army doing its best to hold back from some of the more silly design elements we’ve seen them play with over the years in their struggle to be more modern and edgy. Here, they pull that off mostly by playing with finishes and colors while preserving the functional nature of the watch’s core design. 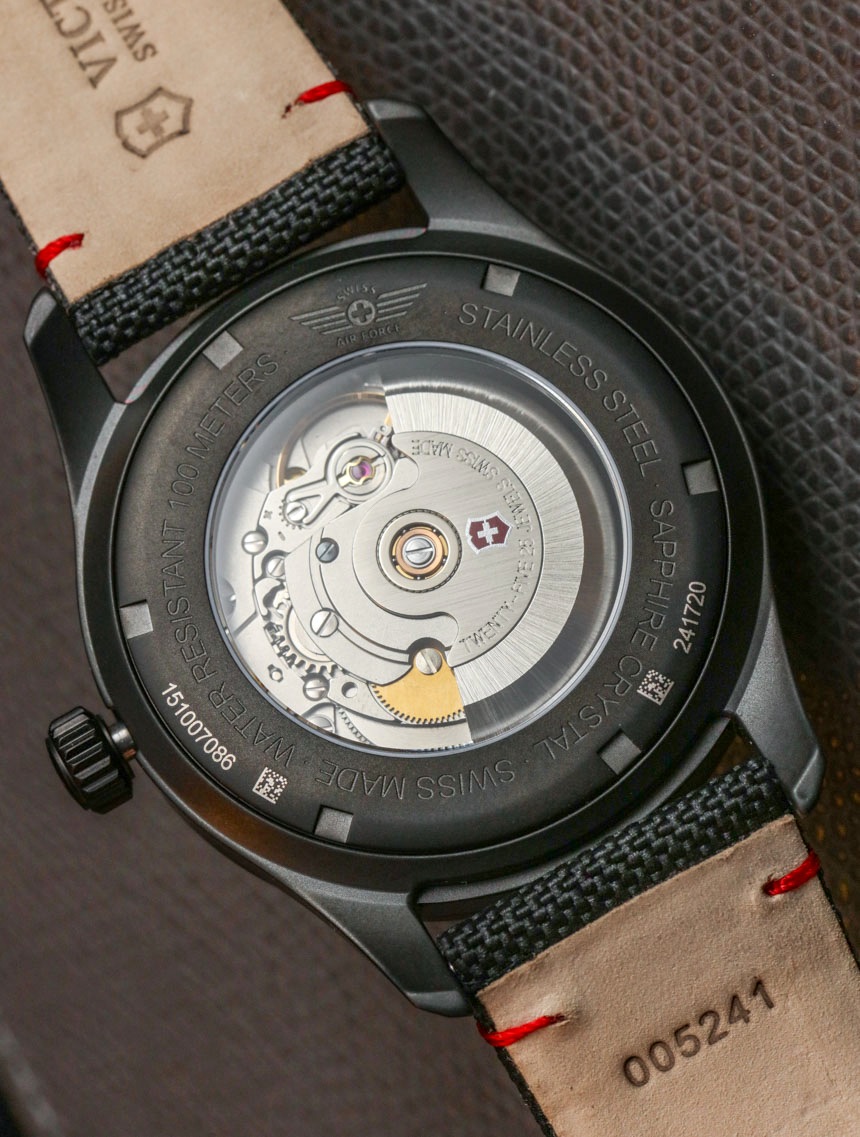 Given the price, I expect a lot of first-time mechanical watch buyers to go for something like this Victorinox Swiss Army Airboss Mechanical. That adds extra value to having an exhibition caseback which allows you to see the base Swiss ETA 2892 automatic movement through the the window on the back of the watch. Victorinox Swiss Army uses a basic grade movement with a custom automatic rotor. Like I said, nothing fancy for those more accustomed to higher-end watches, but really decent at this price point. 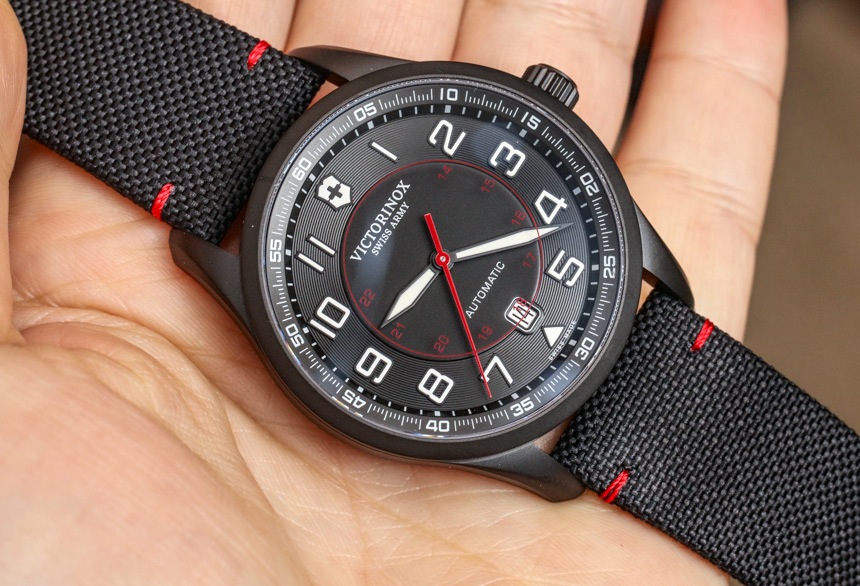 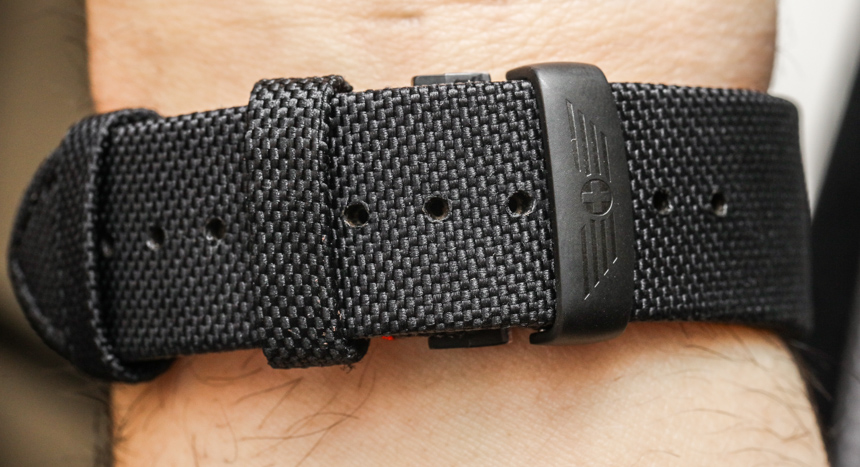 The black fabric strap with a hint of red stitching is a neat touch for the watch. I don’t know if it is a look all wearers will want all the time, but it does add further personality to what could have easily been a bland watch. Victorinox Swiss Army attaches it to a black-colored steel folding deployant clasp, which is some added value. I have a feeling, however, that owners of this Victorinox Swiss Army Airboss Mechanical will benefit from playing with various strap options, including a simple all-black calf leather strap and also even an interesting NATO-style strap. For some people, even a matching black metal bracelet would look nice if Victorinox Swiss Army ever decided to produce one in the future. 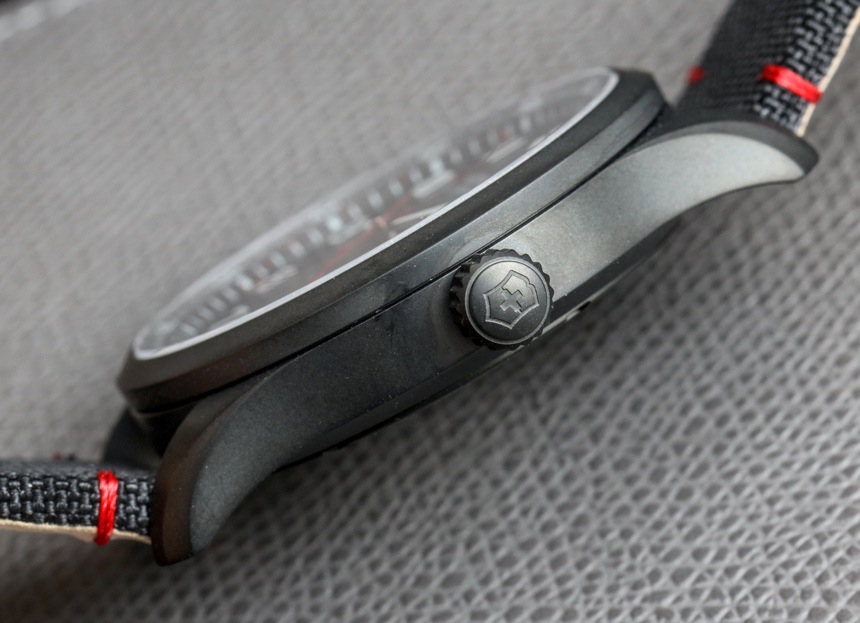 At under $1,000, I think a lot of the value of this Victorinox Swiss Army Airboss Mechanical watch speaks for itself. It comes from a quality, well-known brand with a good history making timepieces, and offers a functional, conservative look with a modern edge to it – something that appeals to a lot of customers. You could do much worse than having this as your first – or one of your first – mechanical timepieces. With strap changes, the design is very flexible and will go with many outfits given that the red of the dial is subtle (monochromatic watch dials are much more versatile when it comes to fashion). Even as someone used to much more high-end watches, I really do enjoy wearing this comfortable and pleasant-to-look-at watch. The Victorinox Swiss Army Airboss Mechanical reference 241720 has a retail price of $995. victorinoxwatches.com